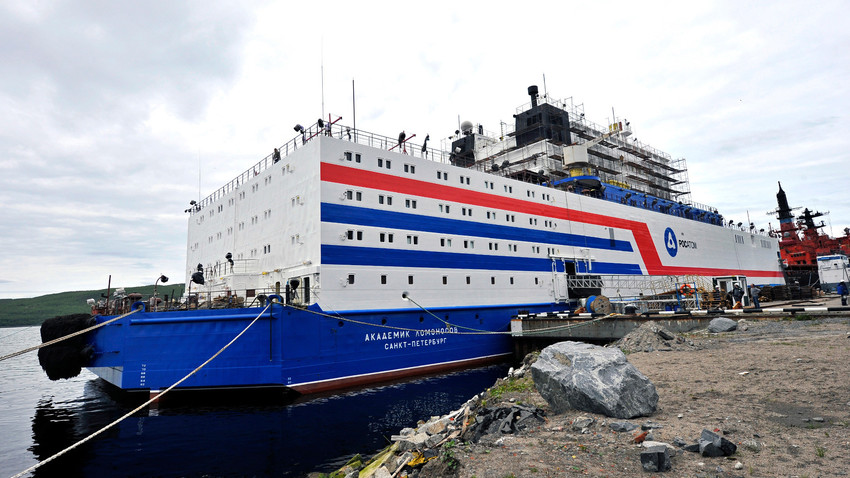 "The Akademik Lomonosov" painted in the colors of the Russian flag

Lev Fedoseyev/TASS
Despite criticism from environmental advocates, Russia’s first-ever floating nuclear power plant is ready to start work. Can it withstand tsunamis? And it is more suitable to compare it with Chernobyl or a nuclear icebreaker?

“Floating Chernobyl” or “Chernobyl on ice” - Russia’s first ever floating nuclear power plant (FNPP) has already made headlines in the West and generated wide criticism from international environmental organizations. The first of its kind, the plant named “The Akademik Lomonosov” will supply power to Russia’s far eastern Chukotka region, help tap the resources of remote regions, and pave the way for other mobile power plants that could serve other countries around the world.

According to critics, this development not only poses the threat of another nuclear catastrophe but also further contributes to climate change - delivering energy to coal mines located in the region. But is it as risky as it sounds?

More than a decade of work 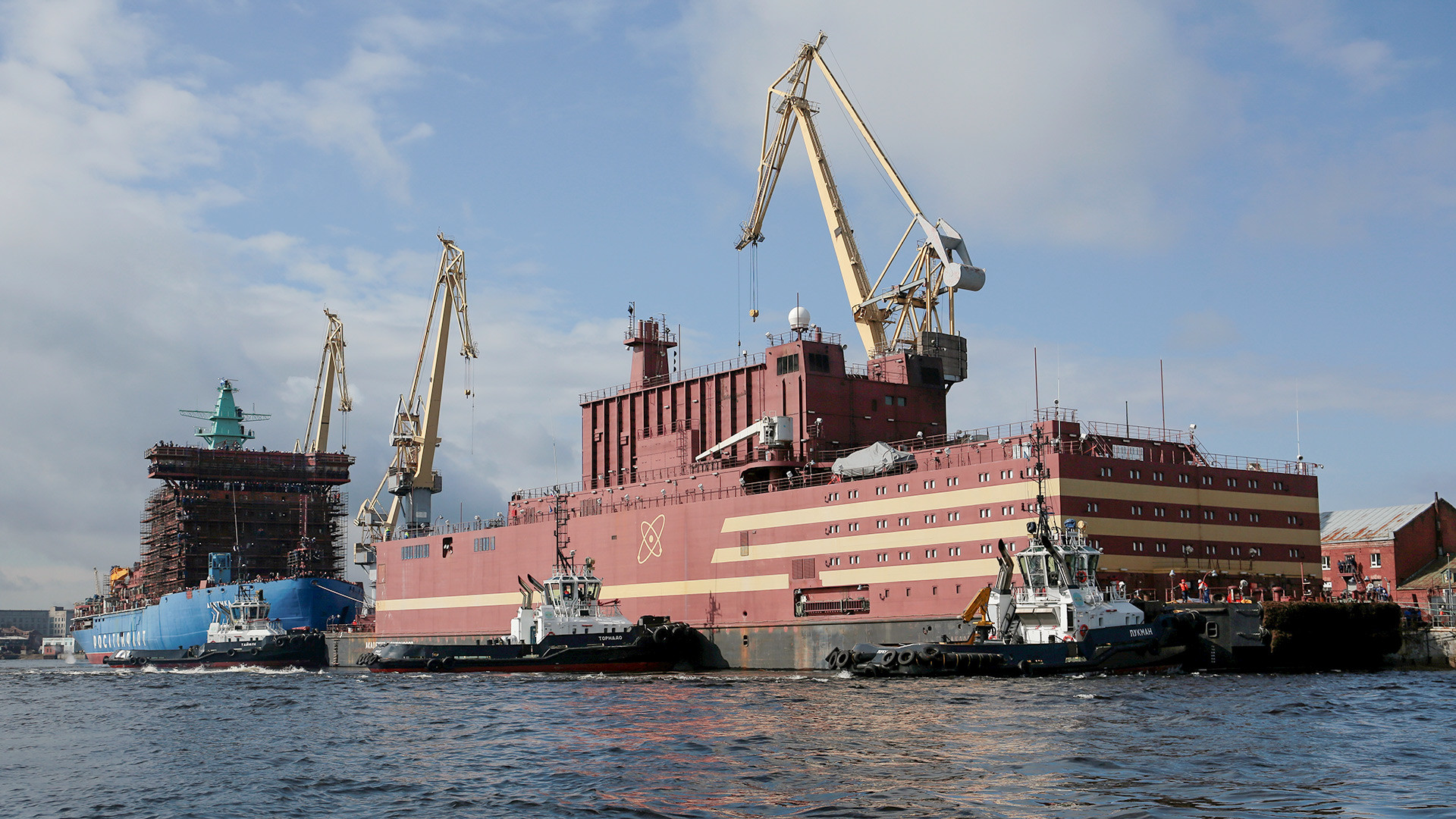 "The Akademik Lomonosov" before the new coloring

Part of Russia’s ambition to develop the Arctic, the Northern Sea Route and mineral-rich Chukotka region, “The Akademik Lomonosov” was commissioned by Rosenergoatom (a division of Rosatom) from St. Petersburg-based Baltic Shipyard (Baltiysky Zavod), one of Russia’s largest shipyards. It was under construction and testing for more than a decade - since early 2007.

This year it finally passed all tests and in early July was handed over to Rosenergoatom, which has a state license to operate the FNPP for 10 years, until 2029. It’s planned that the barge-mounted plant will be towed to the seaport of Pevek in Chukotka in August and start producing its first kilowatt-hours of electricity in December 2019, after all tests and supporting infrastructure are complete. 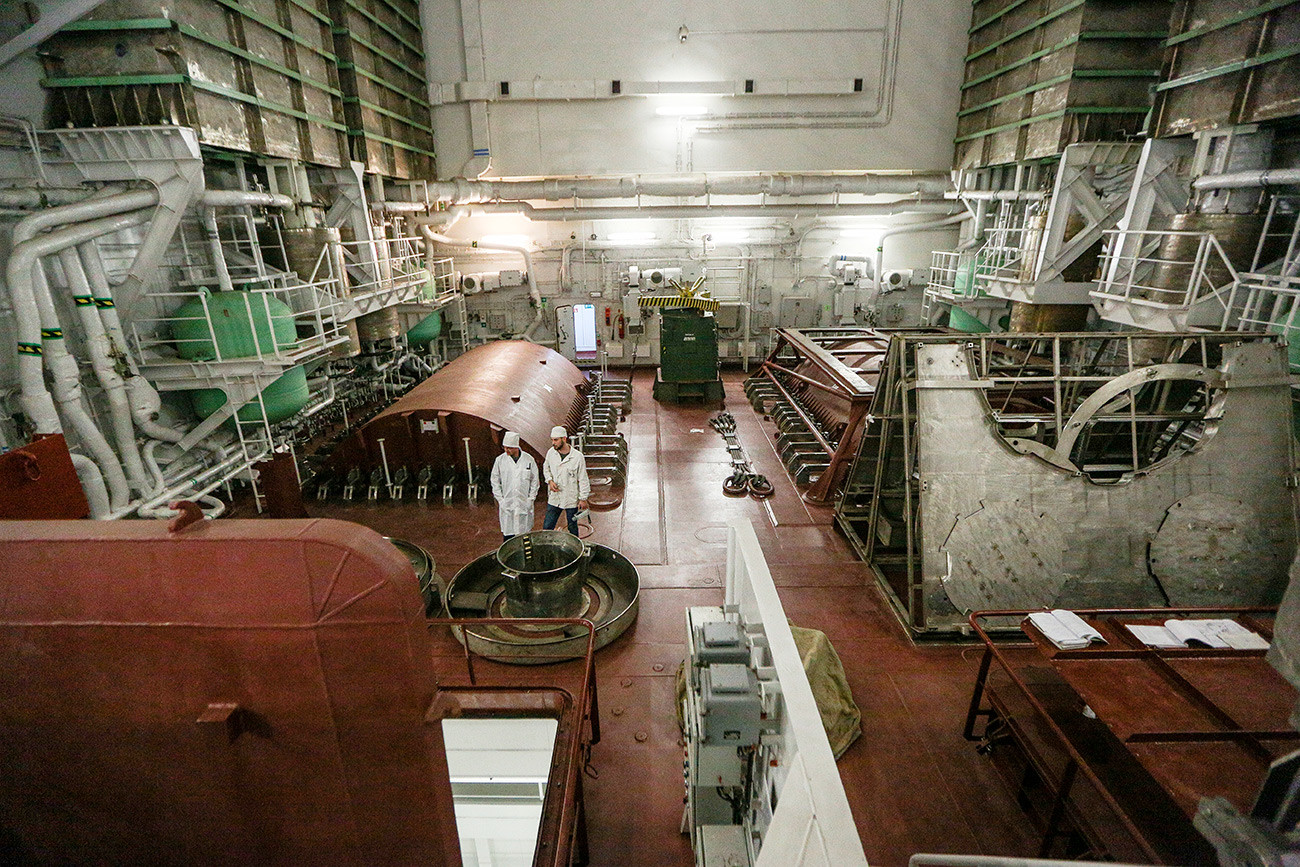 The 144-meter (472 feet) long platform with two KLT-40 nuclear reactors can produce up to 70 megawatts (MW) of electricity and 50 Gcal/h of thermal power - enough to supply 100,000 people. (That is equal to around seven percent of what a large commercial reactor in the U.S. typically produces).

Chukotka is not that crowded (around 50,000 people live in the region and 5,000 in Pevek), but the plant will also power the port of Pevek and natural resources companies working in the region. It’s also planned that the FNNP will replace the existing generating capacities of Chaun-Bilibino Energy Hub (Chaun TPP in Pevek and Bilibino NPP in the city of Bilibino).

“The Akademik Lomonosov” is the only floating nuclear power plant in the world - at least for now. Rosatom is already working on a second-generation of FNNPs - a smaller and optimized floating power unit (OFPU) with two RITM-200W nuclear reactors with a capacity of 50 MW each. According to Rosatom, there is already interest from potential clients in the Middle East, North Africa and South-East Asia. 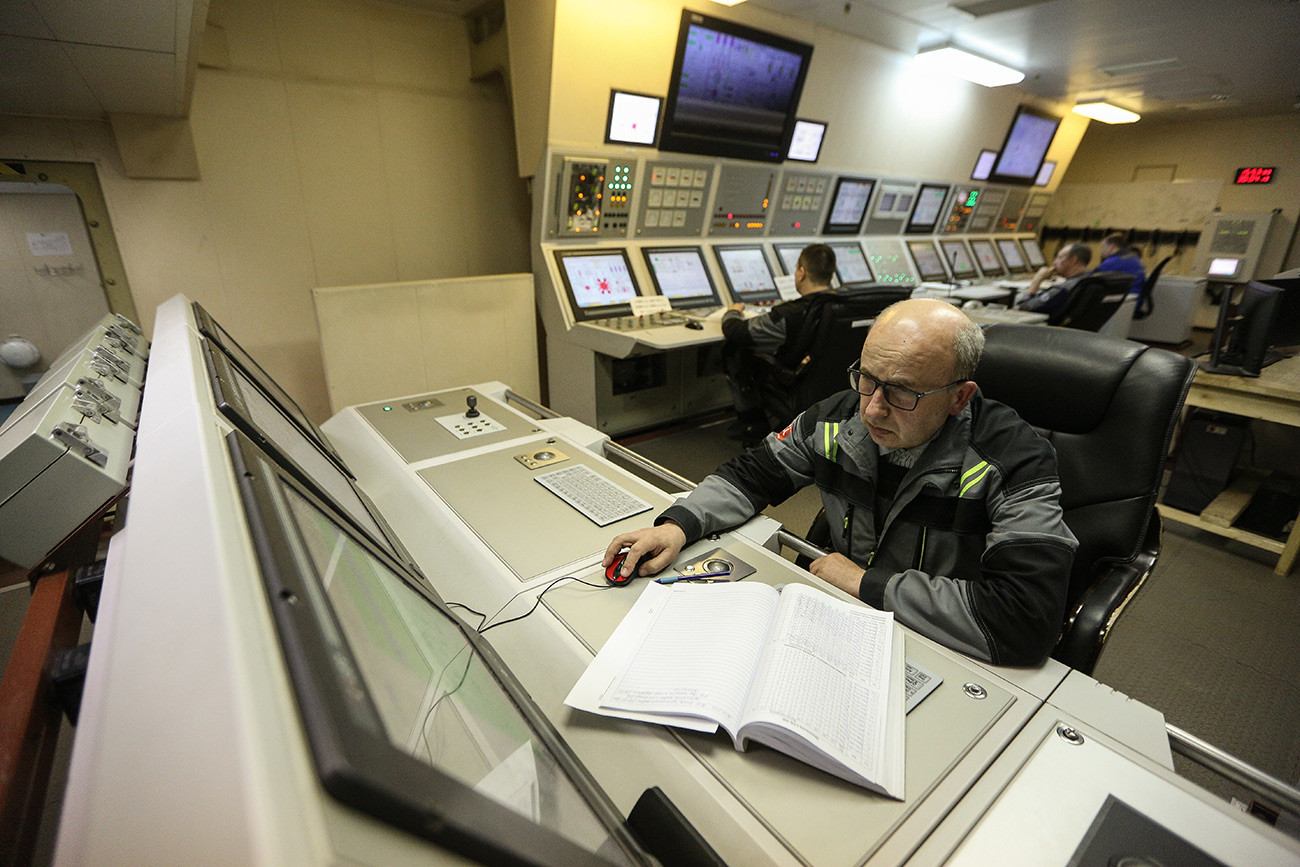 The central control room of the FNNP

The critics argue that the FNNP is a bad idea in itself: it is vulnerable to tsunamis and terrorists, and it will store radioactive waste and fuel - dangerous if, for example, it collides with another vessel. According to Greenpeace, it might have been cheaper to invest the money in the development of renewable energy (like wind-power) in the region rather than sustaining a floating power plant.

Yet others also note that the floating nuclear reactor itself shouldn’t be a cause of alarm - nuclear reactors have been powering submarines for decades and the basic idea itself is not new - a U.S. warship from World War II was plugged into the grid in Panama, where it provided electricity to both civil and military uses until 1976. 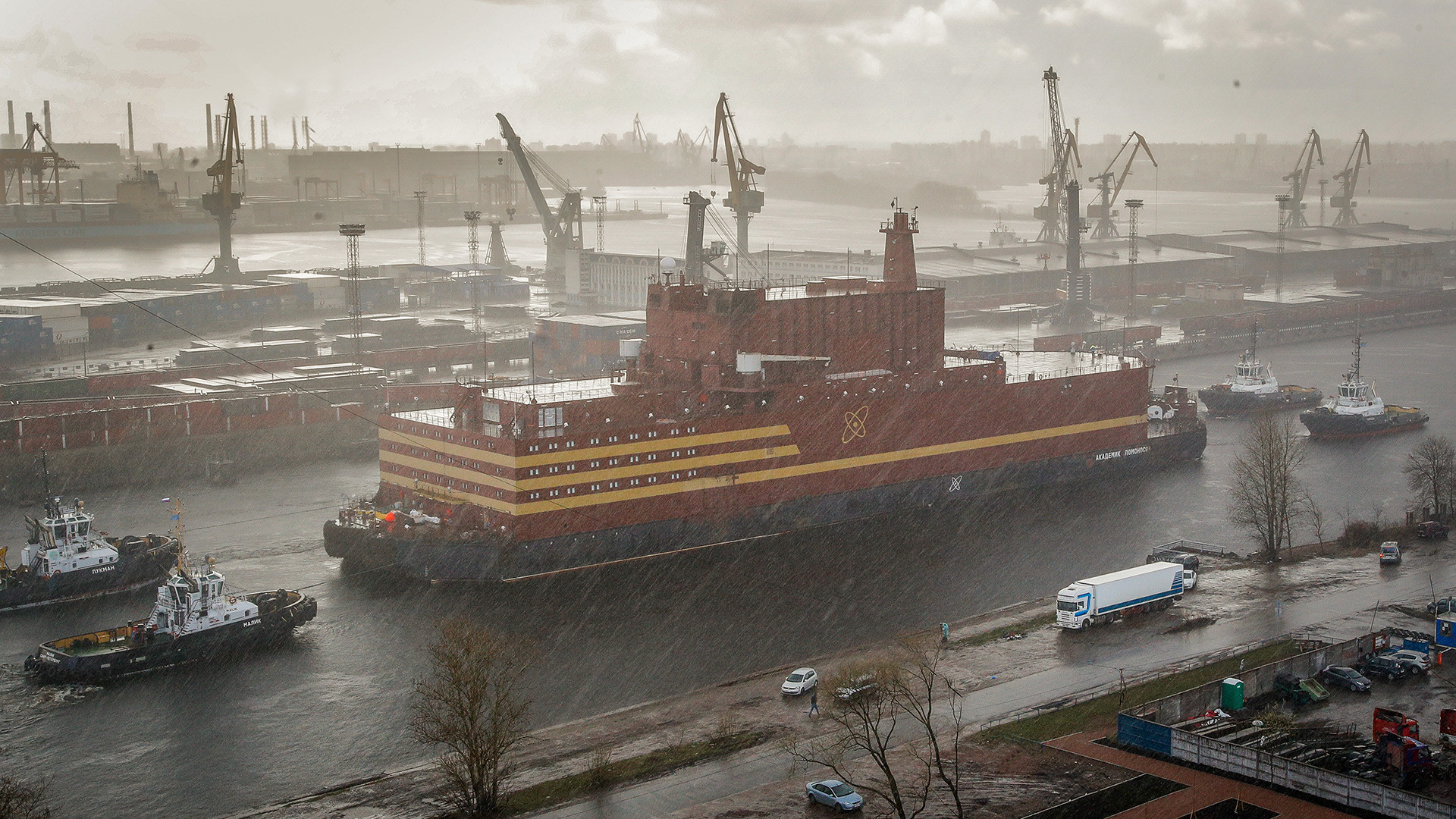 "The Akademik Lomonosov" towed out of the St. Petersburg shipyard where it was constructed

Comparing the FNNP to Chernobyl is a scare tactic, thinks Dale Klein, the former head of the Nuclear Regulatory Commission under President George W. Bush, quoted by the Verge. “It’s just to make people think about an accident of some kind. So it has no basis in science, and it’s really just meant to scare people when you use those kinds of statements,” he said.

The Russian developers of the project echo this view asserting that it’s totally unjustified to compare these two projects adding that the plant has been built to withstand even a force nine tsunami. “These are baseless claims, just the way the reactors themselves operate is different," Vladimir Iriminku, Lomonosov's chief engineer for environmental protection, told CNN. "Of course, what happened in Chernobyl must not happen again... And as it's going to be stationed in the Arctic waters, it will be cooling down constantly, and there is no lack of cold water." 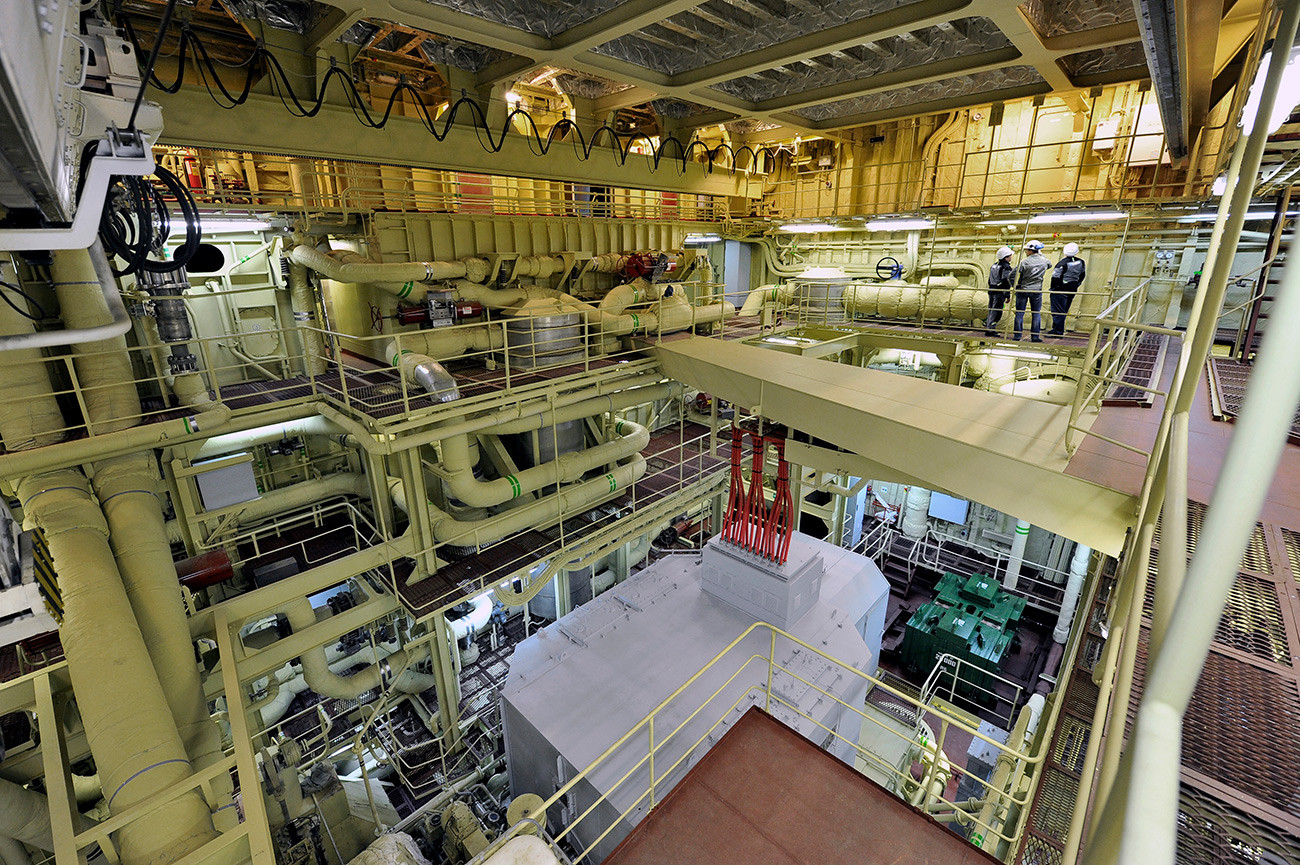 As for the suggestion of a wind-power alternative, Russian experts say that it has its drawbacks. “Wind power generators are effective for powering particular households, but won’t be able to supply electricity to the whole region on an industrial scale,” claims Petr Pushkaryov, a chief analyst at TeleTrade. “There are also some in Europe who raise questions about the environmental aspect of wind-power generators: there is an argument that their vibrations impact the local flora and fauna, disrupting the ecosystem. This, in turn, can be even more visible in the Arctic and it will be costly and physically more difficult to install wind stations there.”

“The main advantage of this plant is in its mobility and ability to work for 15 years without rest. Plus, there will be no radioactive waste on land, after its exploitation,” thinks Gaidar Gasanov, expert at the International Financial Center. “Even though it’s more expensive to maintain than alternative energy generators, one should understand that in the central part of Russia 1 KW/h of energy costs 6 rubles ($0.095), while in Chukotka it’s around 17 rubles ($0.27) - making the plant interesting for regions with no electricity networks.” 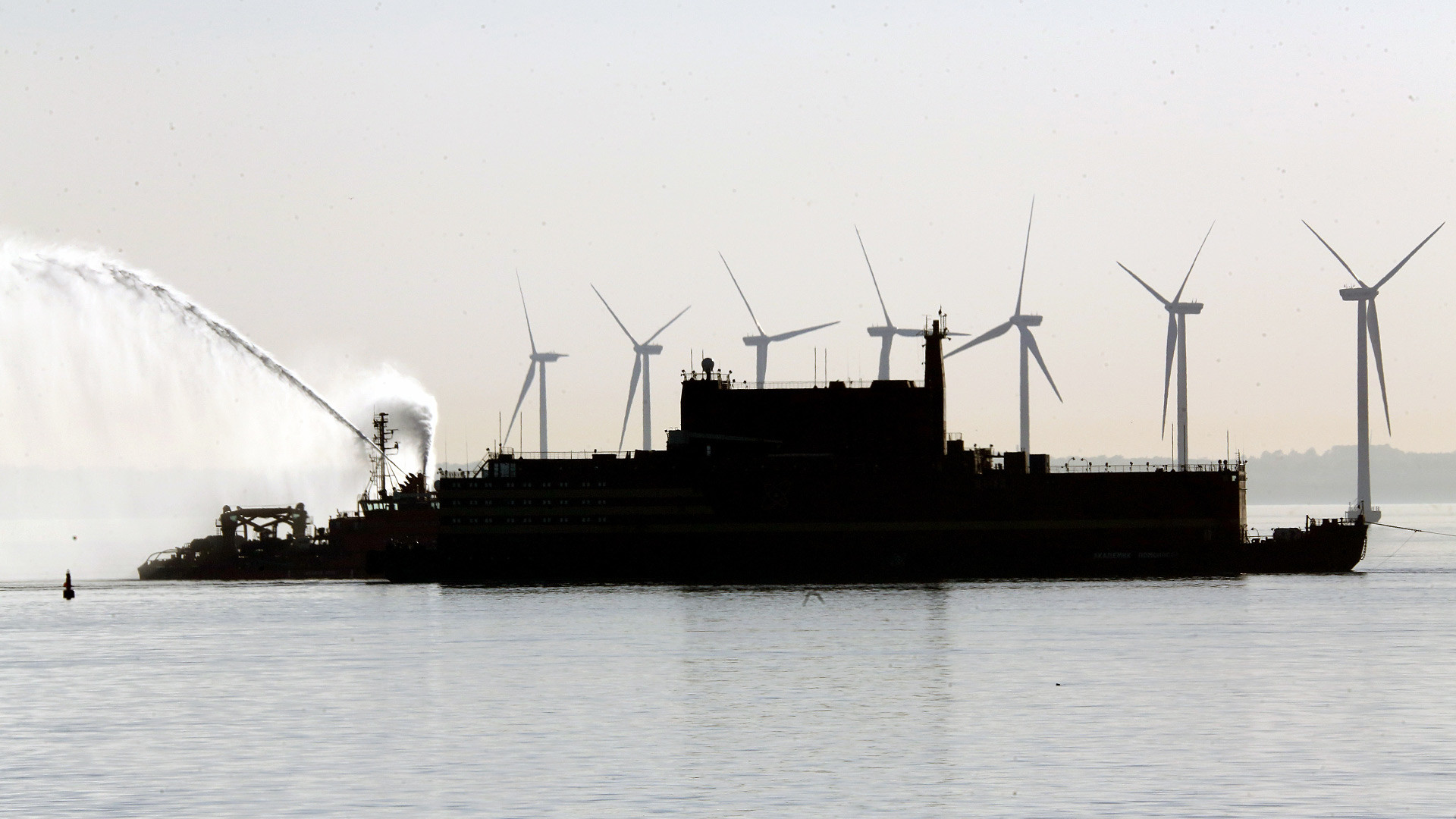 It took the project more than a decade to be implemented and now it will be more rational and easier to just test it in action rather than discuss whether we need in the first place, thinks Petr Pushkaryov. “Of course, one should test it in a remote region, where it’s hard to deliver large volumes of energy that cannot be produced locally,” he says. “It should be done in a region that needs to be developed and where people feel the need for it to happen.”

As a physicist by education, the expert also argues that the idea of the FNNP might prove safer than any nuclear plant on land. “If one stabilizes the FNNP on water and secures it technically in a proper way, then it will work with less risk than any plant on land. Waves, water currents and even ocean tsunami won’t create any problems in the block,” he argues.

According to him, the threat of any kind of destruction or extreme external conditions in this case gets minimized, as opposed to a situation, when, for instance, a reactor faces an earthquake on land: “This won’t happen in the ocean if ‘Lomonosov’ is designed correctly, like its developers say. It’s no coincidence that our nuclear icebreaker fleet has been serving reliably and constantly in the Arctic since Soviet times. And “the Akademik Lomonosov” is, in fact, an unsinkable barge with the same atomic ‘heart’ as Russian nuclear icebreakers have.”