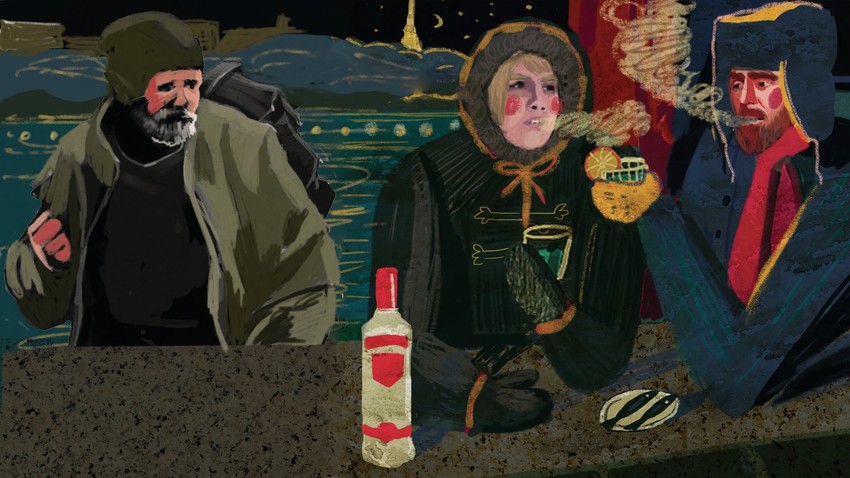 Каterina Lobanova
There’s no equivalent in other languages for the Spanish mañana, German doppelgänger, or English privacy. Russian language is definitely not an exception to the rule.

We have already written about some barely translatable words like ‘toska’ or ‘.’ The article attracted much readers suggesting other words they consider exist only in Russian. Let’s have a look at them.

This word comes from the old Slavic language and copies the Greek “” (conscience, sense of duty). However, in the meaning of ’ is much broader and refers to the deep personal interpretation of good and evil and the feeling of responsibility not only before but before God and yourself.

There is a widespread belief that Russians are big drinkers. Undoubtedly, plenty of words connected to the Russian drinking culture can be found in the language.

For example, there is no direct translation for the word “”. It’s not just a lengthy bender, but a recurrent condition sometimes lasting for more than a week. Some historians claim that merchants in tsarist Russia were legally prescribed taking a rest cure due to "soul illness".

Nowadays there are not many Russians who believe is a reboot required from time to time. There's also an expression "to do something by ," (for example, to read by – «читатьзапоем») which means to do something for a long time without interruption, to be fully immersed in the process.

The term pogrom has multiple meanings as a riot or massacre. However, mostly it describes the act of organized cruelty or killing that is done to a large group of people because of their race or religion. The act should be approved or condoned by the local authorities, too.

The term is usually applied to anti-Jewish violence in the Russian Empire in the late 19th and early 20th centuries according to Encyclopædia Britannica. The characteristics of a pogrom vary widely depending on the specific incidents, at times leading to, or culminating in massacres.

Later the term entered the English language in order to describe mass violence in other countries, for instance, in Germany (“Kristallnacht” also called Night of Broken Glass or November Pogroms).

Originally this word had a specific meaning – an old woman, a female witch doctor. Some linguists believe the combination of the sounds "" is a child’s reaction to another woman who lives in the family home.

One version claims this word transformed into famous babushka (grandmother). In the 18th this term got another meaning: the wife of (peasant) and became a synonym for a plain, uneducated woman.

The embodiment of the Russian baba is well-known due to Nikolai Nekrasov’s poem Who Is Happy in Russia?: baba is a woman who can stop a horse at full tilt and enter a burning house!

Nowadays the word will sound offensive to a Russian woman.

Originally this word meant “a married peasant man”. After the Russian revolution in the status muzhik made their holder proud of being the opposite of bourgeois. It was at that time when the idiom "real muzhik" entered the Russian language and it remains well known to this day.

Who is a real muzhik? It's a man in possession of a wide range of qualities: he's not just strong, but patient, what you see is what you get, and he uses his (see next paragraph) every now and then.

However, the word is not so unequivocal: it may also signify an uneducated, boorish man.

Smekalka is one of the typical features of the "mysterious Russian soul": it’s not just being savvy, ingenious or inventive - it’s the skill to solve problems quickly and simply in imaginative ways.

In Russian folktales, good characters always have a lot of . It helps them to overcome difficulties and win over bad characters.

Smekalka helped honored Russian commanders achieve great and miraculous victories. When military general Alexander Suvorov had to cross a broken bridge in the Alps, he made his soldiers knit the logs with their scarves, which enabled them to fix the bridge!

This Russian word can roughly be translated as hobo – a person who has no home and wanders constantly. But a is not homeless in the traditional sense. He just likes to live in different places, sort of a downshifter. As Russians say about : he's a rolling stone, here today - and gone tomorrow.

This is a philosophical cornerstone of Russian literature and culture in general. According to religious beliefs, is an immortal immaterial basis close to the word (soul).

Besides, is related to the inner condition of the human – “the strength of ” («сила духа») means the individual moral strength. “Dukh of freedom” («дух свободы») means a spirit.

This word is often used in the expression "" which means to get something completely free, without any effort. This untranslatable concept, similar to the concepts of “freebie”, might help to get the philosophy of the Russian collective unconscious (Russians say: vinegar is sweet if you get it “”).

Khalyava is the complete opposite of the typical American dream in which you become successful as a result of a hard work. Russian happiness includes wealth obtained by pure luck or a rich relative who suddenly appears, immediately dies and leaves you a fortune.

A day before exams, students who didn’t succeed in their studies try to attract " " (which is supposed to help them) by opening their textbooks and shouting out of the window of their dorm " , come here!"

The word comes from prison slang, but today you can hear many Russians using it. It was derived from the word "" which means a sneaky, bad man.

When Russians say , it implies they don't want to be like this bad man. “Mne ” (For me it’s ) means the person doesn't want to do something because he considers this action humiliating, beneath his dignity.

Keep in mind that the word has an expressive negative subtext. Being among decent people, you’d rather say “, ” (I would rather not do it, sorry).