Andrei wanted to be a translator but was offered a job as an English teacher. At the time he thought he wouldn't stay long in the job, but he has now been doing it for five years and has even become a popular video blogger.

He didn't find it easy to adapt to school and learned the ropes through trial and error. But "now the pupils are like children to me and I am like a father to them", he says.

Andrei teaches a military cadet class in a high school in which not all the pupils are motivated to learn English. So in the first lesson he helps everyone to formulate why they need English. The young teacher still finds it difficult sometimes, but he says that creativity and a calm approach help him overcome everything.

For Mother's Day in 2014, Andrei had the idea of making a video with his pupils based on a rap song written by one of the cadets. The main purpose was to bring the young people together. At the premiere, the mothers were crying. The result greatly inspired both pupils and teacher. They started trying out musical parodies on different themes and posting videos on the Tik-Tok app.

Andrei thinks up all the storylines together with the pupils, but he edits them himself. Their most popular video - a school musical to the tune of the song Despacito - has been watched by 360,000 people.

And now Andrei's pupils are working on the following parody, and they have already found a dance troupe and a place to record it.

A year ago Andrei launched Survival School for a Young Teacher, a YouTube blog with advice for colleagues who are just starting in the profession, where he posts videos on typical school topics such as the canteen, lessons, bad teachers and insubordinate pupils. "I want young teachers to stay in schools and not be intimidated by paperwork and other problems," he says.

When Vyacheslav graduated from a school with enhanced English language teaching in the city of Perm, he could not even have imagined becoming a teacher. He trained as an interpreter, worked as a volunteer at international events and, as part of the Global Education program, went to Monash University in Australia to get a second degree.

Two years later, when Vyacheslav returned to Perm, he was asked to teach English at his old school and has been doing so for two years now. Soon he won the Man in Education competition, and it is not just his pupils who started following his Instagram account. Journalists have described Vyacheslav as "Russia's sexiest teacher" and social media users said he should have been a model, not a teacher.

While his followers are busy discussing photos of Vyacheslav, he himself gets ready for lessons. In his opinion, today's pupils benefit most from an individual approach and not so much from  textbook exercises. It is better to focus on an area in which a particular student has an interest. For example, if your child likes sport, let them watch sports broadcasts in English and talk of the games they have watched.

"To me it is important that children should like the process itself and not be afraid of their marks. After all, a mark is just a way of understanding where you currently are on the path to acquiring knowledge, and not an evaluation of you as an individual," Vyacheslav says.

Vyacheslav believes that many school students find it easier to take a teacher as a role model and that's why appearance, erudition, a sense of humour and emotional intelligence are very important for a teacher. Vyacheslav's plans include recording podcasts in English. As for Instagram, he doesn't want to invest resources in promoting his account: For him, it is just a diary that helps him look back and reflect.

This primary school teacher in the town of Serpukhov is only 25 years old, and he has been teaching for seven of them. Currently he is the only male teacher on his primary school’s staff. It was after Kirill met his little charges for the first time that he discovered teaching was his vocation. 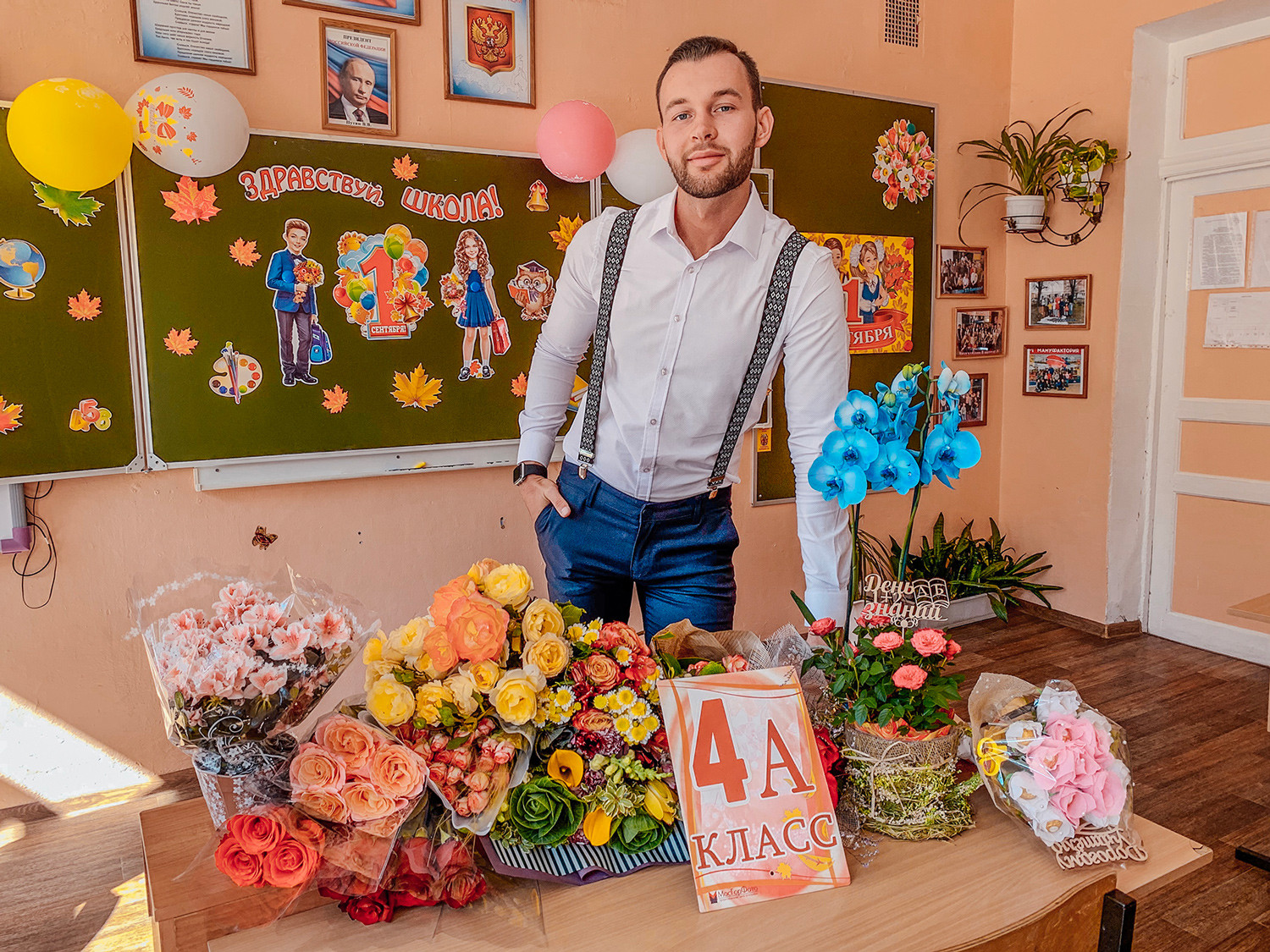 His master classes on handicraft lessons, and videos and postings about school life attract thousands of likes on Instagram. According to Kirill, he didn't plan to use the account for work purposes, he simply started posting reports for parents, and the children liked being photographed with their teacher.

After he won the Teacher of the Year title in 2015, the number of his followers increased and the young teacher started receiving letters from colleagues with questions and ideas.

According to Kirill, you should take an enthusiastic and positive approach to teaching today’s schoolchildren, and try to be on their "wavelength" while pointing them in the right direction.

Children like bright, kind and genuine teachers who will love and inspire them.

The mission of a child’s first teacher is to get them interested and instil a desire to learn from year one, Kirill believes. 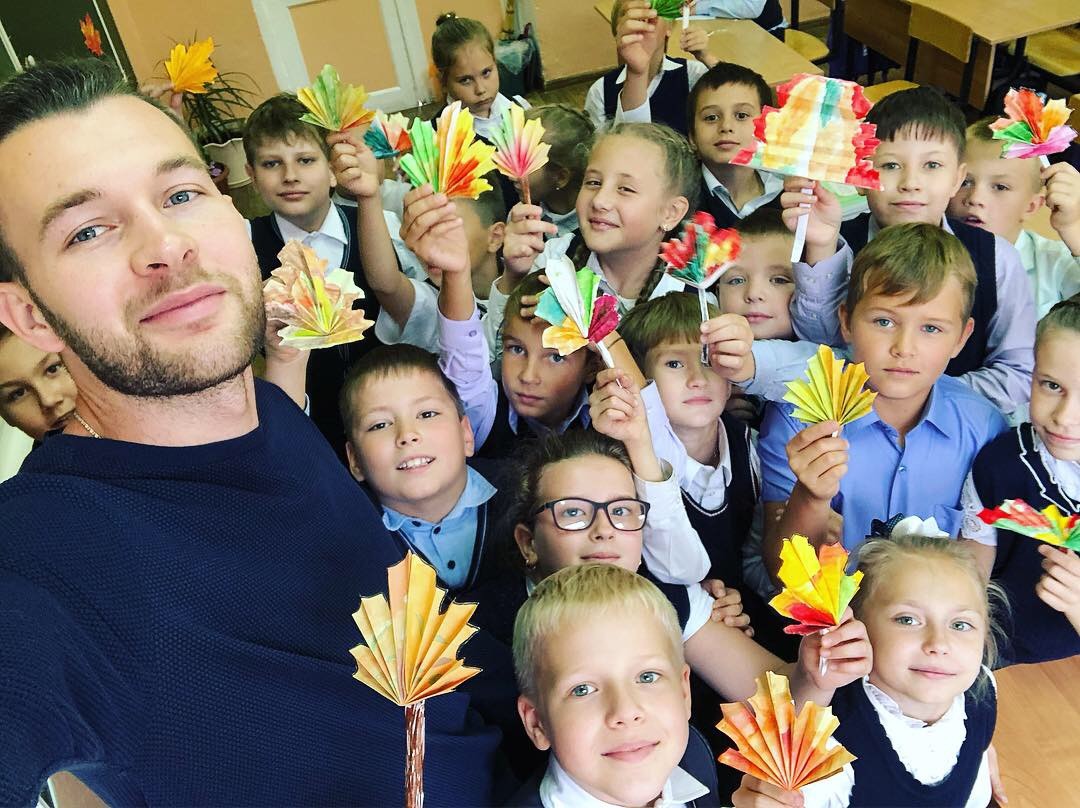 Furthermore, it is important to create traditions for children. For instance, at the end of each school year Kirill's class gets together for a picnic, and for parents evenings the teacher and the children jointly prepare self-critical sketches, which they enact for the mums and dads. If a child doesn't want to go to school, Kirill suggests that, to begin with, the reasons behind such behaviour should be sought; it may be fear - and that is something that should be dealt with.

The teacher plans to further develop his account because having more than 16,000 followers means there are like-minded people out there, as well as those who find his postings helpful. For the time being Kirill is the only Insta-Teacher in Serpukhov but hopes others will soon join him.