Mercenaries in Ancient Rus’: Why Russians weren’t afraid of the Vikings 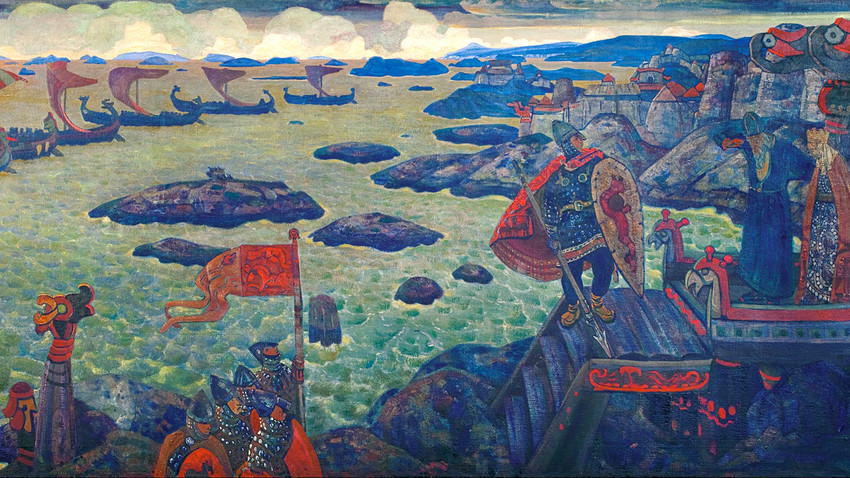 Ready for the Campaign (The Varangian Sea) by Nicholas Roerich.

International Centre of the Roerichs.
The rulers of ancient and medieval Rus’ eagerly sought assistance from mercenaries, be they Scandinavian warriors or fighters from nomadic steppe tribes. The relationship between the state and mercenaries was often strained. Nevertheless, in the end the mercenaries were generally incorporated into the ever-changing social fabric of the Russian state.

“From the fury of the Northmen deliver us, o Lord.” The wording of this possibly apocryphal prayer effectively conveys the terror felt by Europeans about barbaric Viking raids in the early Middle Ages (the end of the 1st millennium AD). For a couple of centuries, Vikings terrorized England, Scotland, Ireland and other countries. However, in Eastern the situation was strikingly different. The Eastern Slavic tribes not only did not fear Vikings – or Varangians as they were called there – they actually invited them to come. Scandinavians were hired as mercenaries, and Slavic princes included many Varangians in their retinue.

How Varangians and Slavs mixed

Prince Vladimir, who brought Christianity to Rus’, used the support of Varangians to capture the capital city, Kiev, in 979. According to ancient chronicles, when they became burdensome (largely because they demanded a lot for their services – namely a contribution from every person in Kiev) he decided to send them away to the Byzantine Empire. Before doing so, however, he sent a message to the emperor, warning him not to let the Varangians stay as one unit in the capital since they could become dangerous 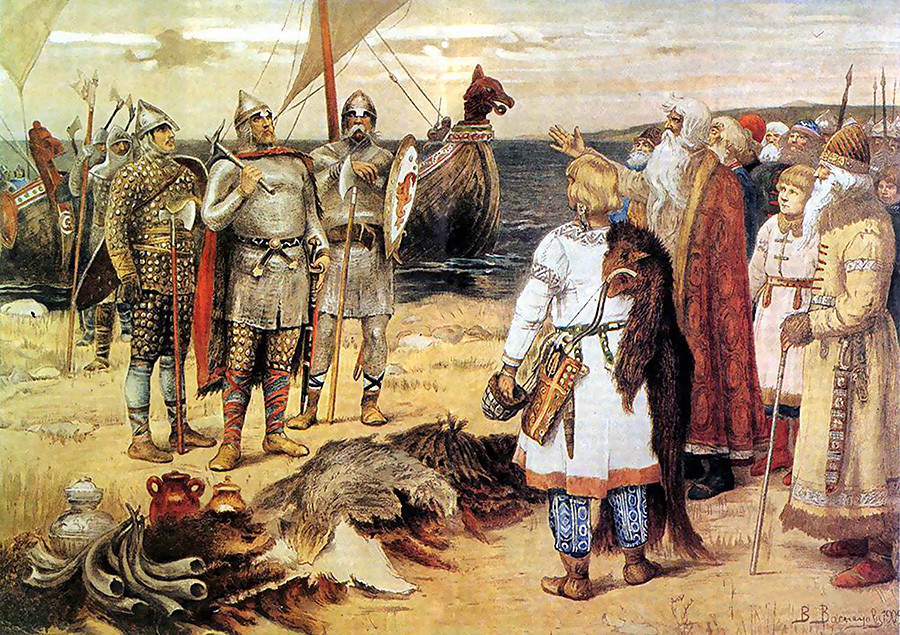 The Invitation of the Varangians: Rurik and his brothers arrive in Staraya Ladoga by Viktor Vasnetsov.

to some historians, there was at least some kind of detachment composed of the Varangians in the Byzantine emperor’s court at that time, although it is unclear whether these Scandinavians were the same Vikings whom Vladimir send packing.

At the same time, the relationship between the Slavs and the Varangians was not always harmonious. Some evidence of this comes from a story lying at the foundation of the Russian state. According to the oldest chronicles, the Slavs in Novgorod invited the Varangian prince, Rurik, with his retinue. Some Russian historians have argued that Rurik was called in as a mercenary and a military leader but then organized a coup, overthrew local elders and became a ruler in northern Slavic territories.

Later on, the dynasty he established controlled all of the ancient Russian territories. In his explanation of how this happened, the Russian historian Vasiliy Klyuchevsky referred to the notes of one Jewish traveler during the 10th century who wrote that some Northern tribes “who gained control over Slavs still live among them, adopted their language and mixed with them”.

Around the same there was another almost limitless source of mercenaries in Rus’ – the southeastern steppes. These produced waves of nomads of different ethnic origins that used to come to the heart of the Russian territories one after another. They first appeared at the borders as invaders but, after a period of cohabitation with the ancient Russians, their attitudes eased up. They eventually came to function as allies and were often used as mercenaries

The Pechenegs slaughter the "Scythians" of Sviatoslav I of Kiev from The Madrid Skylitzes.

raids by the Pechenegs, a nomadic Turkic people, plagued early Kievan Rus’. In the 11th century, the archbishop Theophylact of Bulgaria wrote the following about them:

“Their advance is like a strike of a lightning, the retreat is both tough and light: It is tough because of the war trophies that they carry, and light since it is so fast. […] They rob other countries since they do not have their own. life is a misfortune for them, they are happy when they have a pretext for war. [..] Their number is countless.”

However, the chronicles point out that by the next century the Pechenegs were being hired by the princes of Rus’ and even served as troops protecting its borders. A similar story occurred with the next wave of nomads – the Kipchaks who replaced the Pechenegs.

The pattern with nomadic mercenaries was once again repeated in the 13th century, although there were some differences. This time it was the Tatars. They came in as the cruelest invaders in Russian history, but pretty soon, as was the case with their predecessors, they became a tool in the internal political struggles of Rus’. When, for instance, in 1293 one of the princes, Andrei of Gorodets, decided to challenge the authority of his brother, the Grand Duke of Vladimir, he brought a huge army of Tatars that devastated fourteen ancient Russian cities. They say that even in the evidence of that attack could be still found in that region 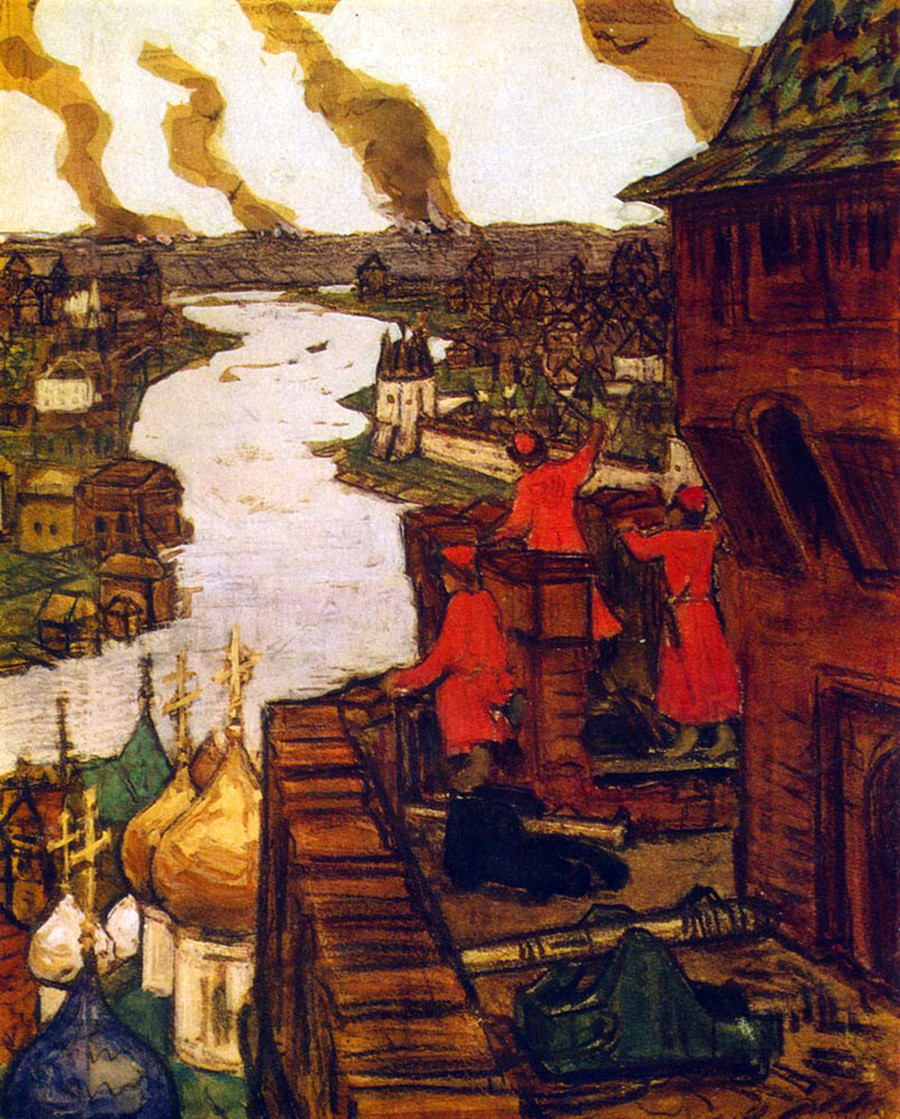 Tatars are coming! by Apollinary Vasnetsov.

movie “Andrei Rublev” provided one of the most powerful depictions of Tatar troops as mercenaries in Medieval Rus’. The film includes a scene where Tatars invited by a Russian prince storm a church and ruthlessly plunder it.

Later on, however, hand in hand with the growing might of the Moscow tsardom, some Tatar territories were incorporated into the Russian state, and the Tatars were turned into obedient servants of a tsar with a special status similar to that of the Cossacks.