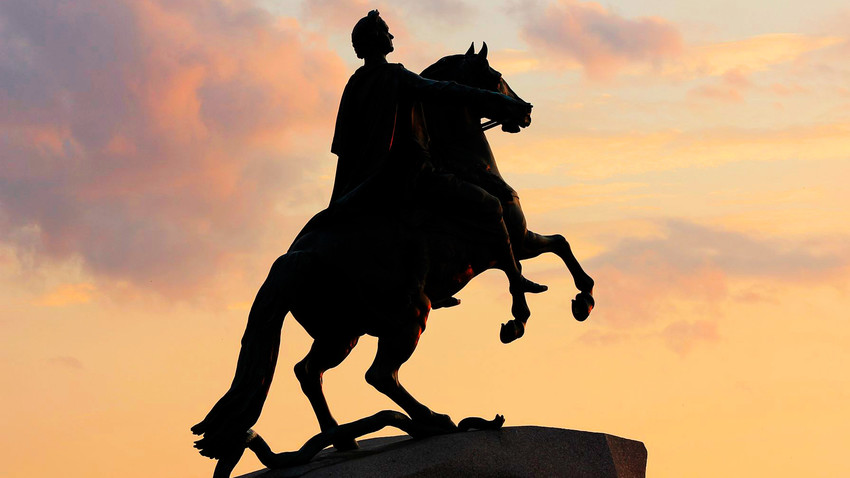 The Bronze Horseman, an equestrian statue of Peter the Great by the French sculptor Étienne Maurice Falconet.

Kora27/Wikipedia
Peter I was one of the greatest reformers in Russian history, and his rule has been scrutinized and written about by generations of historians in Russia and abroad. Mysteries remain, however; sometimes quite disturbing ones that still loom over his reign.

1. Not an authentic tsar?

Russia was a peripheral European state before Peter the Great ascended the throne, but by the end of his rule (only in a quarter of a it had become a mighty empire. Peter created a professional modern army, boosted development of industry, and managed to gain access to an important strategic route through the Baltic Sea.

In the process of achieving his reforms, Peter challenged the centuries-old traditions and rituals of Russia’s political and social life, rejecting the old in favor of radically modern European patterns. No wonder people were startled by these blistering changes in a short time span and tried to explain them somehow, even with outlandish theories. 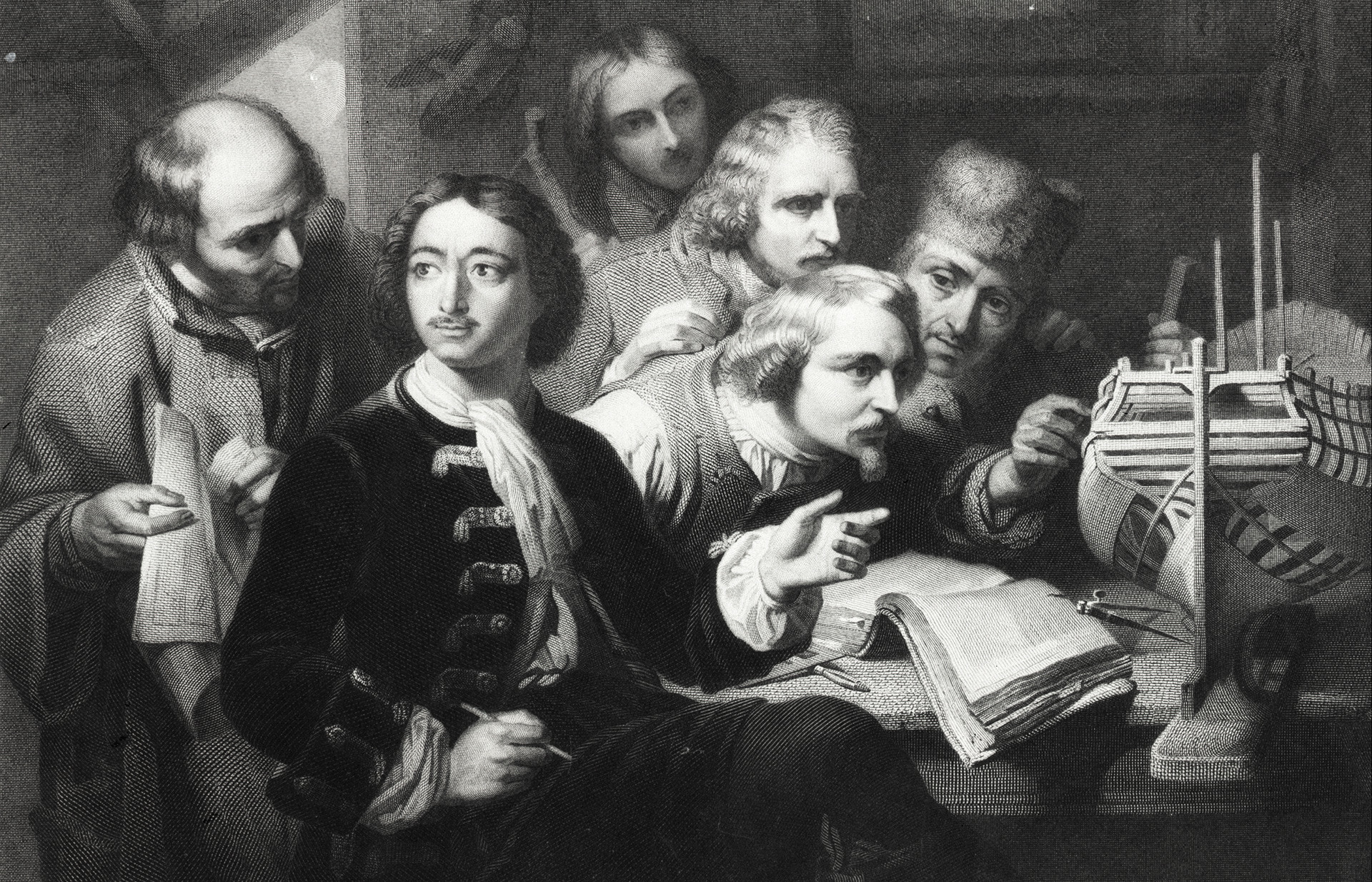 The fact that Peter favored foreigners and eagerly adopted their practices fueled rumors that he was not really Russian, and was an illegitimate tsar. Allegedly, the real Peter had been replaced by “a German,” which is how all foreigners in Russia were referred to at that time.

There were two theories how this might have happened. First, Peter was allegedly replaced from the very beginning, as soon as he was born. His mother had given birth to a girl, so the legend goes, but Peter’s father wanted a boy. Hence, she took the young son of one of the foreign commanders who served at the tsar’s court.

According to another account, the real Peter disappeared during his unusually long trip to Europe in 1697-98. After returning from the so-called “Great Embassy” - in the course of which he visited many European countries – Peter launched his modernization and Europeanization reforms. Some believed that the “true Peter” was kept prisoner somewhere abroad: either held in the wall of the Riga or tarred in a barrel in Germany.

Many Russian contemporaries believed in the “tsar’s replacement,” especially those who did not accept the church reform of the previous reign and were brutally persecuted under Peter. They referred to him as the “Antichrist.” Professional historians, however, do not doubt Peter’s authenticity, either before the Great Embassy or after it.

This mystery concerns a terrifying discovery related to Peter’s reign, but which was known only decades after his death. In the late 18th century, the head of the Russian Academy, Princess Ekaterina Dashkova, became puzzled by a number of alcoholic spirits that the Academy regularly used. She decided to clarify the matter, suspecting drinking abuse. Legend has it that the answer from the Academy’s staff shocked her. Dashkova was told that the spirits were strictly for scientific purposes, and then she was shown several drastic items: two glass jars with human heads inside. The spirits were used to preserve them. 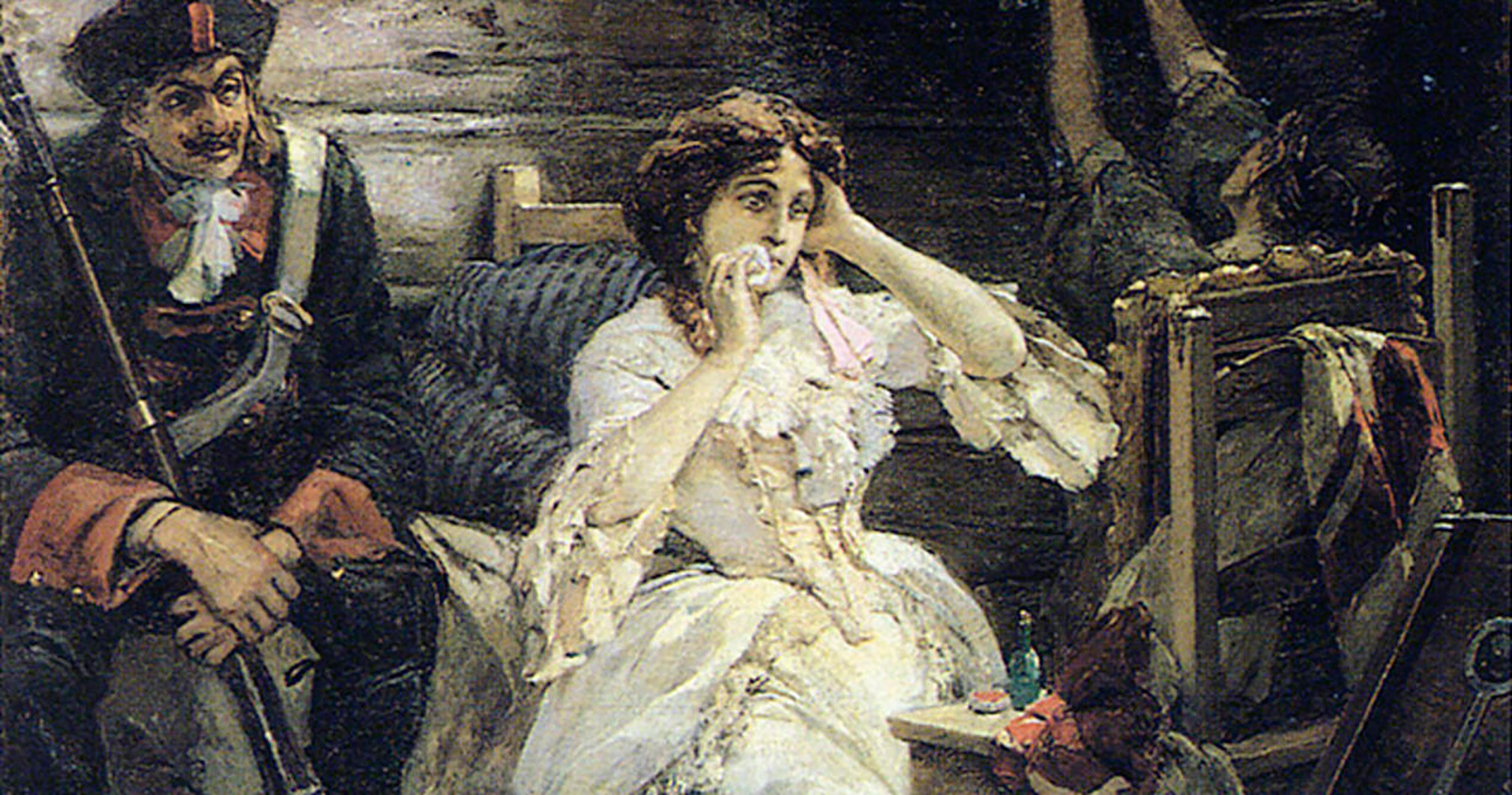 Mary Hamilton before her execution. Painting by Pavel Svedomskiy.

Both heads belonged to former courtiers of Peter the Great and his wife, Catherine. One was Mary Hamilton, a descendant of a Scot who immigrated to Russia in the middle of the 16th century. She was Catherine’s lady-in-waiting and one of Peter’s and was executed by his order for abortion and infanticide. It was believed that the baby she killed might have been Peter’s child, although by the time of the investigation and sentencing she had had sexual relations also with the tsar’s assistant.

The second terrible find belonged to Willem Mons, Peter’s secretary and the lover of the . When Catherine’s infidelity became evident, Peter was enraged even though he had multiple mistresses, as was the case with Mary Hamilton. Mons was prosecuted for alleged embezzlement and soon beheaded. It’s said that the tsar ordered to place Mons’ preserved head in the bedroom of the .

3. Peter’s death and final will

Speculation raged not only around Peter’s but also by the circumstances of his death. They were fueled by the fact that shortly before Peter’s death his wife Catherine fell out of his good grace due to the Mons’ affair. It was a potentially dangerous situation for her. 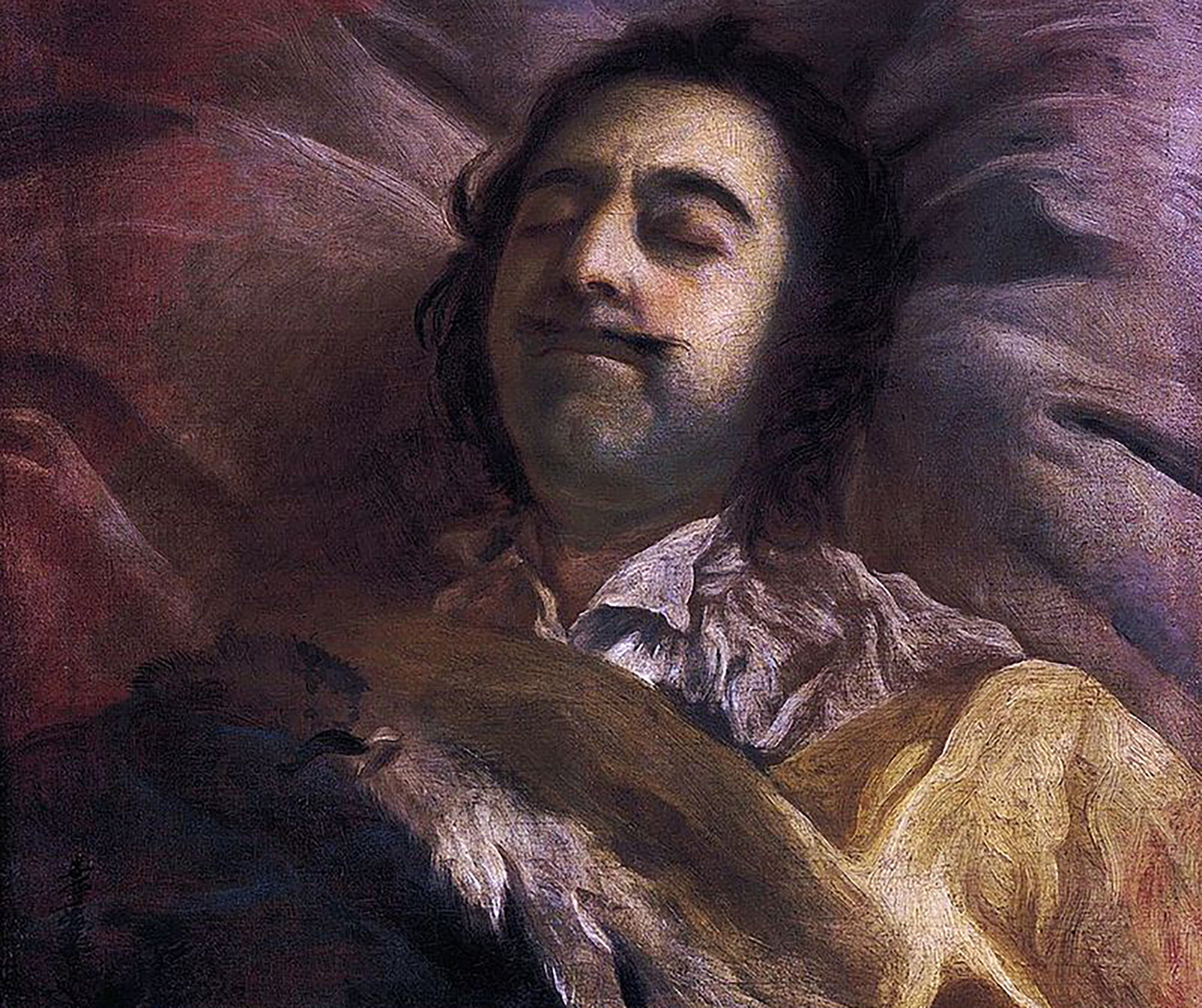 Peter I on his deathbed. Painting by Ivan Nikitin.

The position of Alexander Menshikov, the most powerful person at court after Peter himself, was also shattered at this time. There was talk that Alexander and Catherine might have desired the monarch’s early death. However, as historian Evgeniy Anisimov asserts, Peter’s death in 1725 was due to chronic sexually transmitted diseases.

There are also different stories connected with the emperor’s will. One legend says that on his deathbed the tsar asked for ink and paper and allegedly wrote, “To give everything to…” but died before was able to finish the sentence.

After his death, everything was given to Catherine, but speculation about the will did not stop. Nearly 100 years later, in 1812 in France, amidst the Napoleonic wars, a document appeared titled, “The Will of Peter the Great.” It was Russia’s alleged plan to subjugate all of Europe. Historians soon determined that this “will” was a forgery.

Nevertheless, the will was used to discredit Russia in some European countries in the 19th century. In the end, however, the true `will’ of Peter was a modernized country that became an important factor in European politics to this very day.