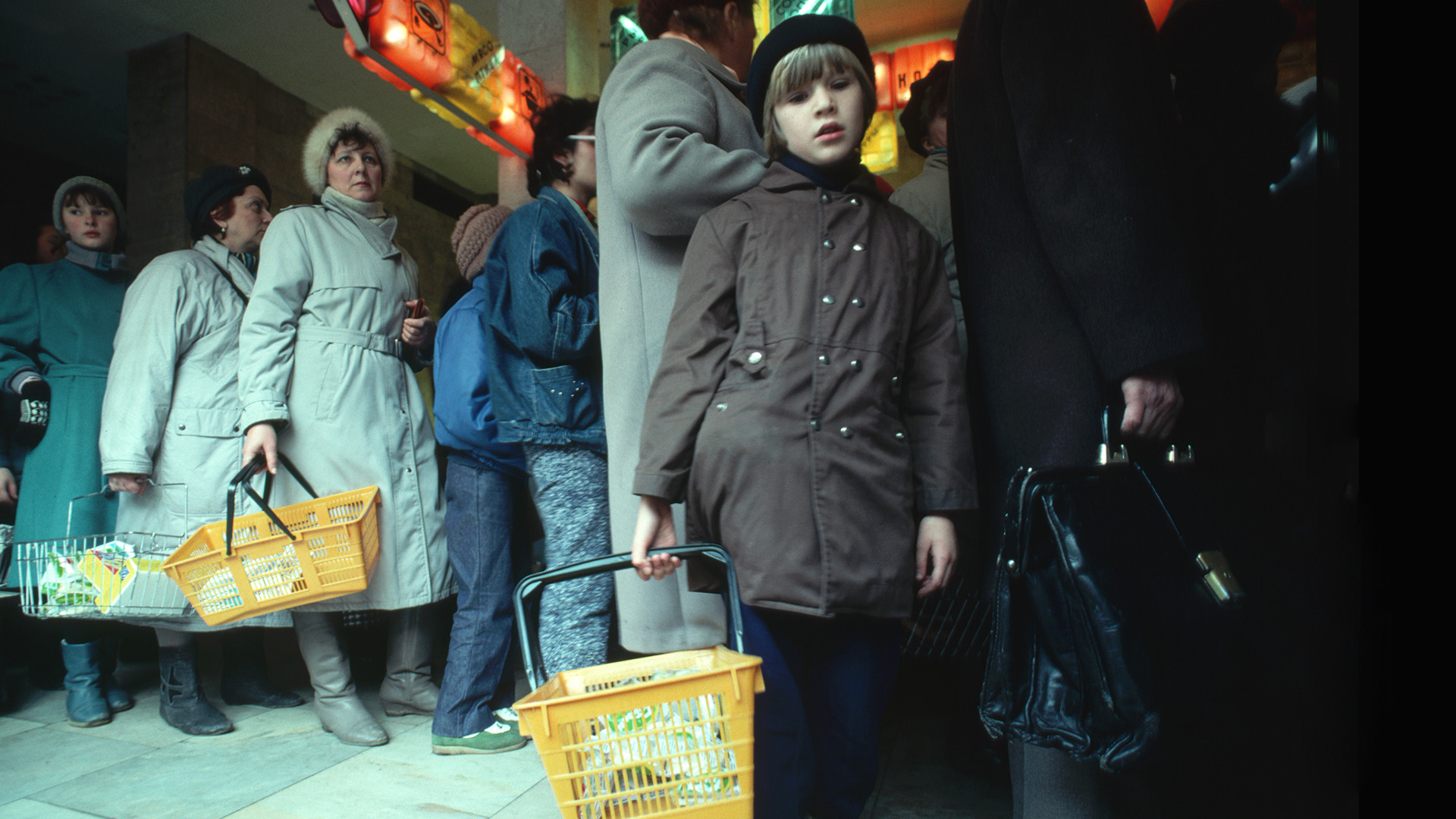 Getty Images
In the Soviet Union you didn’t necessarily have to be a member of the elite to buy Western goods and luxury items. If you were resourceful and able to get your hands on foreign currency, then you could buy things that most other Soviet citizens only dreamed of.

Officially, the only place where you could legally spend foreign currency in the Soviet Union was at the upscale supermarket, Beryozka. In the beginning, only highly privileged Russians were able to shop at Beryozka – diplomats, military specialists and athletes. But as basic consumer goods became increasingly scarce, more and more average Soviet citizens found ways to shop there.

Beryozka was primarily aimed at tourists, particularly from the West, who were invited to spend as much of their country’s hard currency as possible. To that end, these shops mostly sold souvenir trinkets. Gini Graham Scott, in her Soviet travel memoir, described the Beryozka shop on Gorky Street (now Tverskaya) as a “paradise for tourists,” filled with art books, jewelry, vodka and exquisite matryoshka dolls. 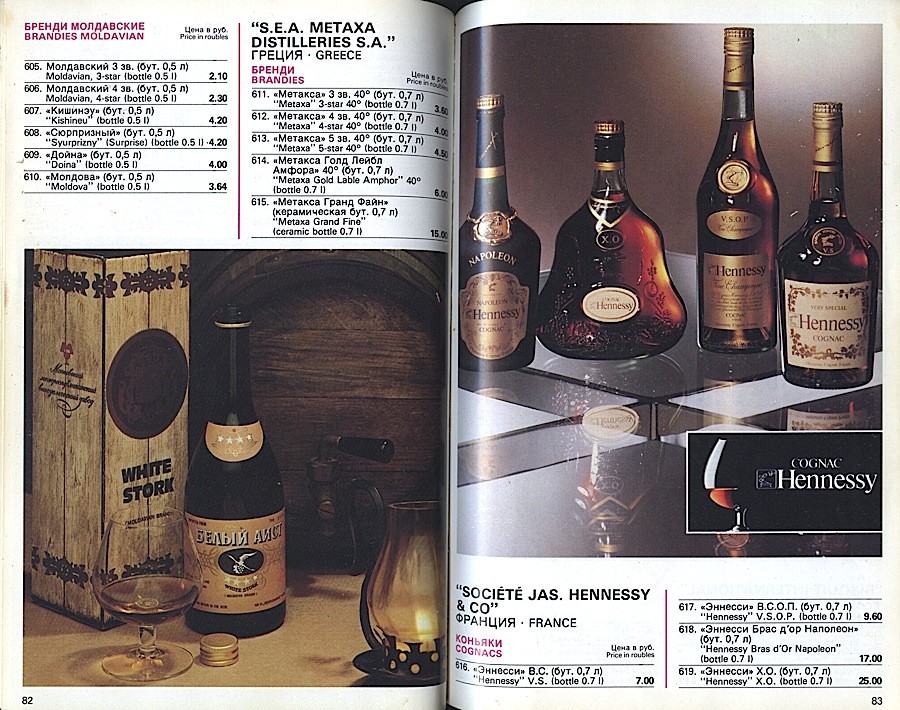 However, for the few Soviet citizens who had foreign currency (from 1965 they were allowed to convert their currency into Beryozka checks with a ruble equivalent), the chance to visit a Beryozka shop had more practical appeal. For example, it had plenty of meat unlike most Soviet supermarkets, where the priority was on basic staples such as potatoes, porridge, vodka and sweets. Check out these prices below: 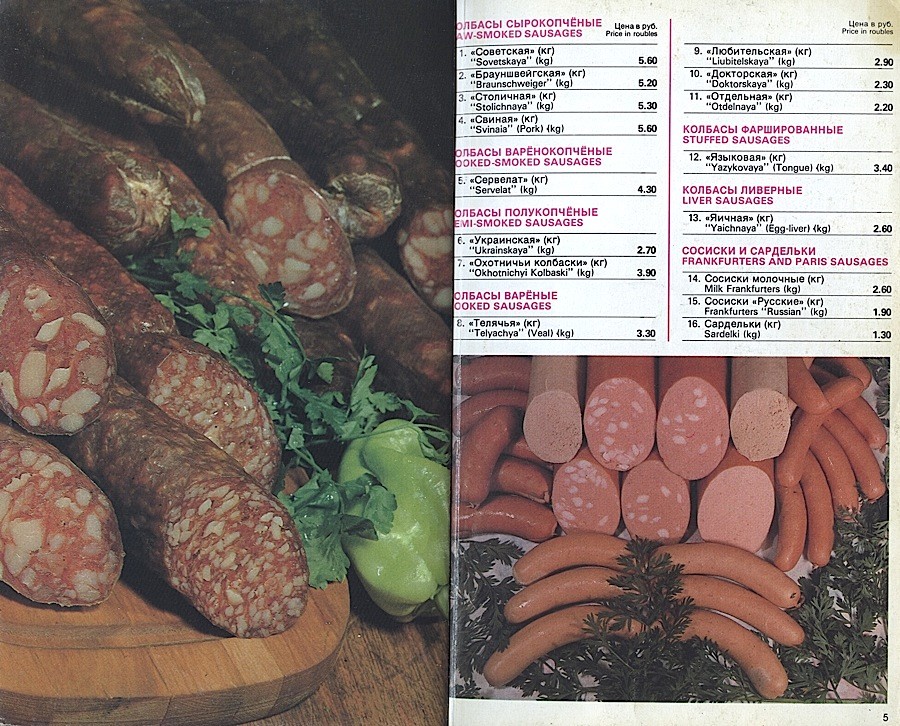 Salami might have been one of the more expensive items on the list, reaching 5 rubles (around $7.50 each at the time), but pork and beef were certainly affordable – even more so if you stocked up on canned meats, which were usually priced at less than one ruble. 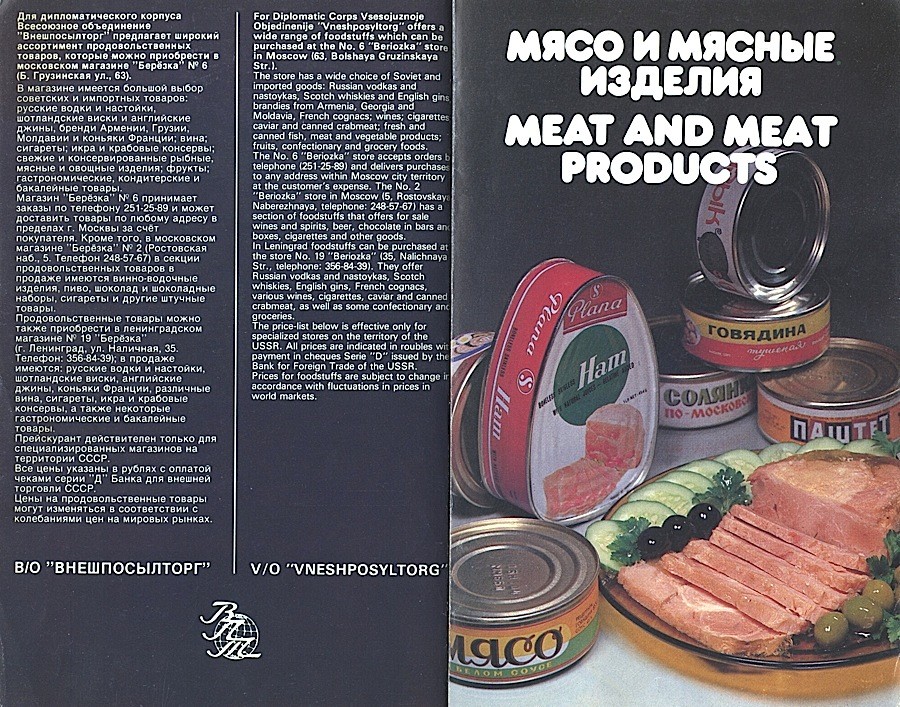 While for many Russians a trip to Beryozka was more to buy scarce foodstuffs such as meat, those interested in 'food for the soul' also found the hard-currency shop useful. According to one New York Times article from 1977, Beryozka was a good place to purchase books that the Soviet government frowned upon, including the works of Boris Pasternak and Iosip Mandelstam.

As production of consumer goods expanded under Brezhnev’s rule, some items began to appear in Beryozka that clearly were not meant for tourists. Cars, for example, were among the most popular purchases, but only domestically-produced ones. There was the added appeal of not having to wait in a queue or resort to blat (favor-based preference). At Beryozka, one simply paid cash for goods, just like in a capitalist country.

In 1970, as many as 7 percent of all cars sold in the USSR were bought with foreign currency at Beryozka shops. The most popular car was the Lada Sedan, which went for around $7,000 (about half the usual state price). More luxurious options, such as the GAZ Volga, could cost anywhere between $15,000 and $25,000. 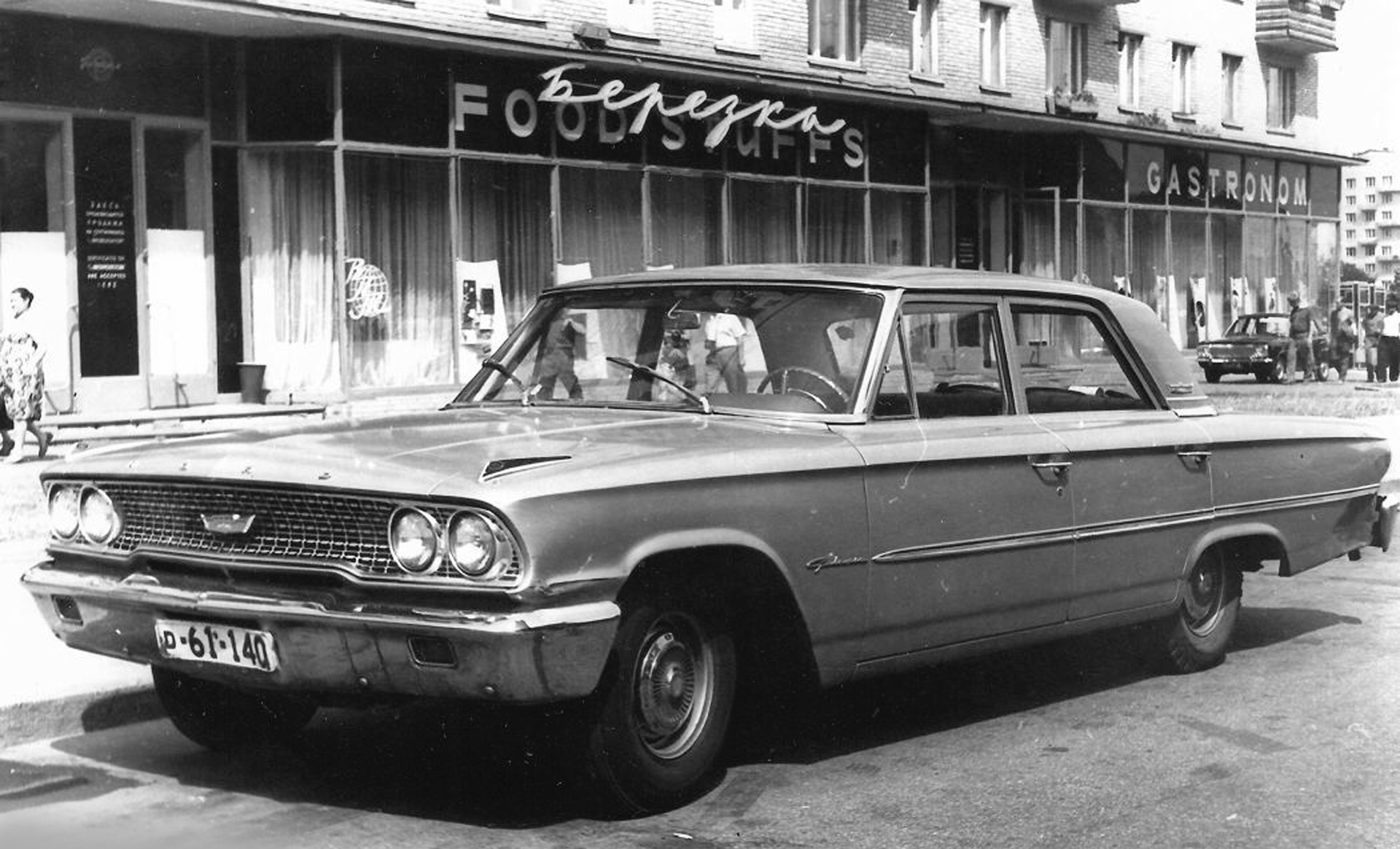 Aside from cars, the Beryozka stores that dotted the Soviet Union’s main cities were well stocked with clothes, furniture, and by the 1980s, electronics. The Soviet state, which could not produce these items itself, was apparently content to let its citizens buy these imports, often at marked-up, heavily taxed prices. As journalist Philip Taubman witnessed in 1987, Soviet citizens paid up to 2,100 rubles for Toshiba TV sets (over $3,000 at the time, far more than what one would pay in America).

Just how did Soviet citizens get their hands on forbidden foreign currency?

The most obvious category of Beryozka shoppers were the elites, whose prestigious jobs in the Communist Party gave them the right to travel to abroad and sometimes even to earn money there. Among these were civil servants such as diplomats and military officers, but also Soviet celebrities such as athletes, musicians and cultural attaches, who were carefully chosen to represent the USSR abroad. One such man was legendary singer Vladimir Vysotsky, who travelled to France several times, where he met his French wife Marina Vlady. In his song, “I’m the most sober of all men,” he details going to the Beryozka shop to buy presents for his family after returning home from a trip. 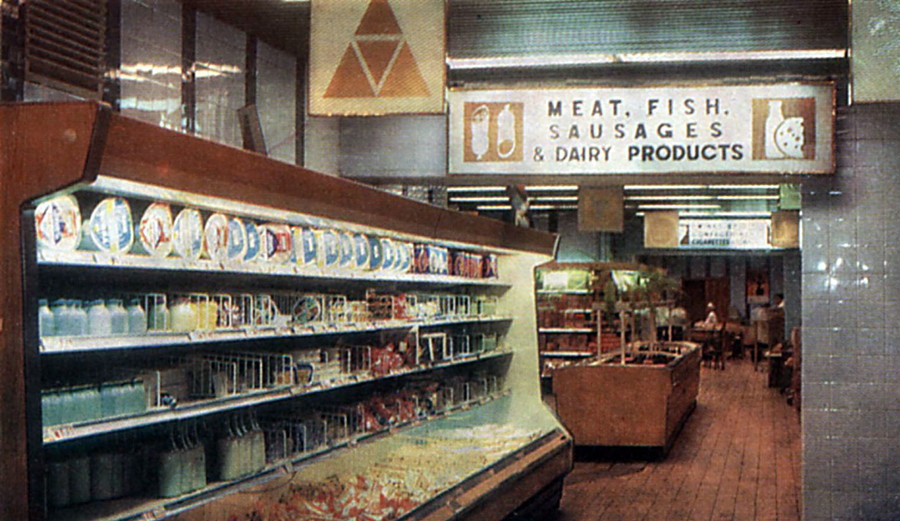 As historian Anna Ivanova revealed in her study, Beryozka shopping was available to all kinds of people, provided they put their mind to it. For example, while travel to the West was restricted, almost any specialist could apply for a job overseas in any one of the Third World nations allied with the USSR, and where they were paid in foreign currency. Ivanova cites sociologist Georgi Delugian, who volunteered to work as an interpreter in Mozambique for a year, and then bought his family a GAZ Volga with the earnings.

Soviet citizens with relatives abroad also benefitted from remittances, and as people began to emigrate in the 1970s the Soviet state was more lax about Western currency sent home, as long as it was converted into Beryozka checks. 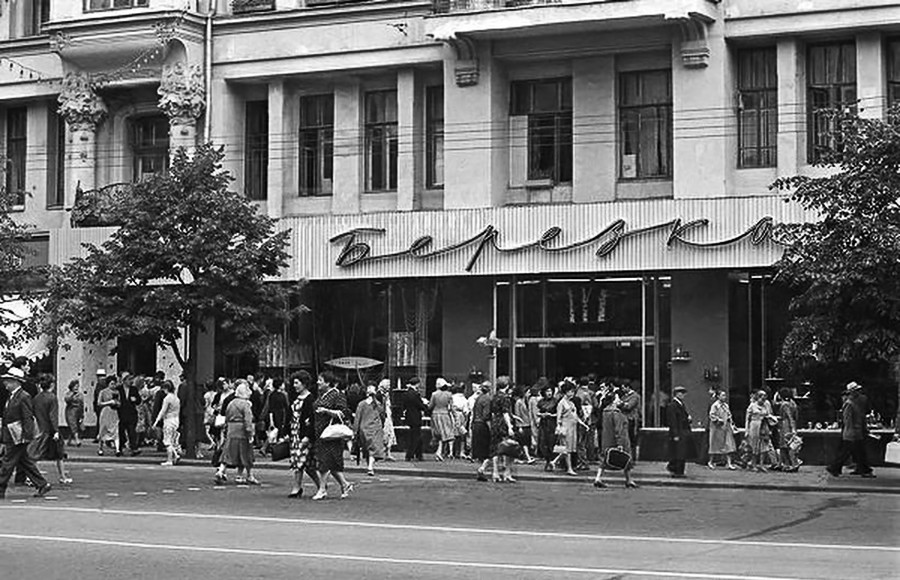 Another way to acquire foreign currency was to deal directly with foreigners. As Philip Taubman recounted, his ruble payment was rejected by a waiter in a Soviet restaurant who told him, “We only accept real money.” The prospect of seducing a foreigner was also extremely attractive to a Russian woman, not least with the thought of a trip to a Beryozka shop in mind.

For most, however, the only access to foreign money and Beryozka checks was through the black market, where smugglers would often take a commission of more than three or four times the official exchange rate.

In 1988, Beryozka shops began to close as Soviet leader Mikhail Gorbachev waged his ‘war on privilege.’ In the early 1990s, when foreign currency trade became legalized, they had become entirely obsolete and shuttered their doors for good.