Playing out Russian history: The disintegration of the USSR from 1985-1991 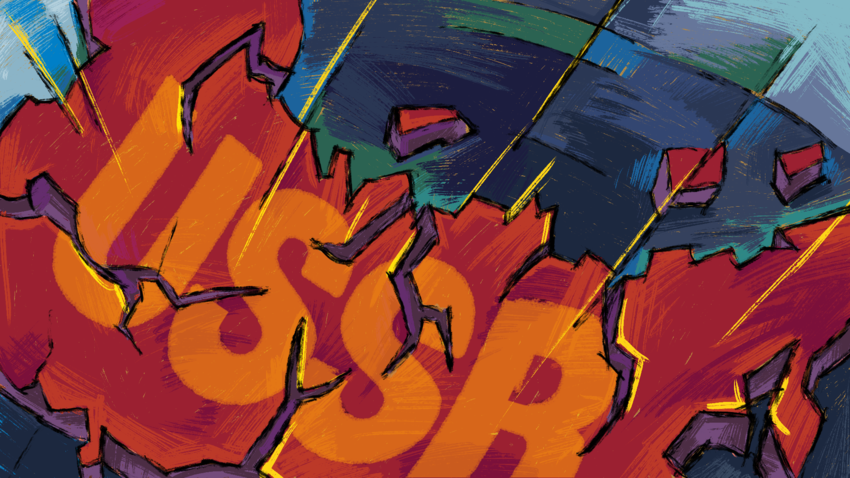 The Soviet Union seemed unbreakable but it fell apart in a couple of years.

Grigory Avoyan
We explain how the greatest Socialist empire of all time fell apart in a couple of years. Countries, historical figures, and people are presented as characters in a play.

USSR – a Socialist superpower with a lot of nukesRSFSR (Russian Soviet Federative Socialist Republic), Ukraine, Belarus, Kazakhstan, Georgia, Armenia, Azerbaijan, Moldova, Kyrgyzstan, Uzbekistan, Tajikistan, Turkmenistan, Latvia, Lithuania, Estonia – 15 republics within the USSR(not all of them are equally happy to stay there)Mikhail Gorbachev – (relatively) young and handsome Secretary General of the Communist Party Boris Yeltsin – Gorbachev’s frenemy, a young Russian Communist popular within the SCSE (State Committee on the State of Emergency) members –old hardcore communists who really don’t like any reforms Soviet people –Soviet people. By 1985, there are around 276 million of them

Disclaimer: Phrases used in the play are not exact quotations but reflect the actions of persons mentioned and the events occurred during the shown period

Soviet people: Yeah, whatever. At least, this one is just 54-years-old, maybe he’ll last longer. The previous three – Brezhnev, Andropov, and Chernenko – died within three years!

USSR: So, what do we have here? There are many troubles: We’re highly dependent on oil export – we need oil money to buy grain… and the oil prices have been tanking since 1981. The economy is at a deadlock, the Cold War threatens the whole world with nuclear Armageddon. For Marx and Engels’s sake, I hope that Gorbachev will get us out of this mess.

Gorbachev: I admit the problems and I’ll do my best to solve it, comrades. From now on, we start the uskoreniye (“acceleration”), course aimed at catching up with the West and improving our heavy industry. Hope we will succeed.

Soviet people: But we won’t. 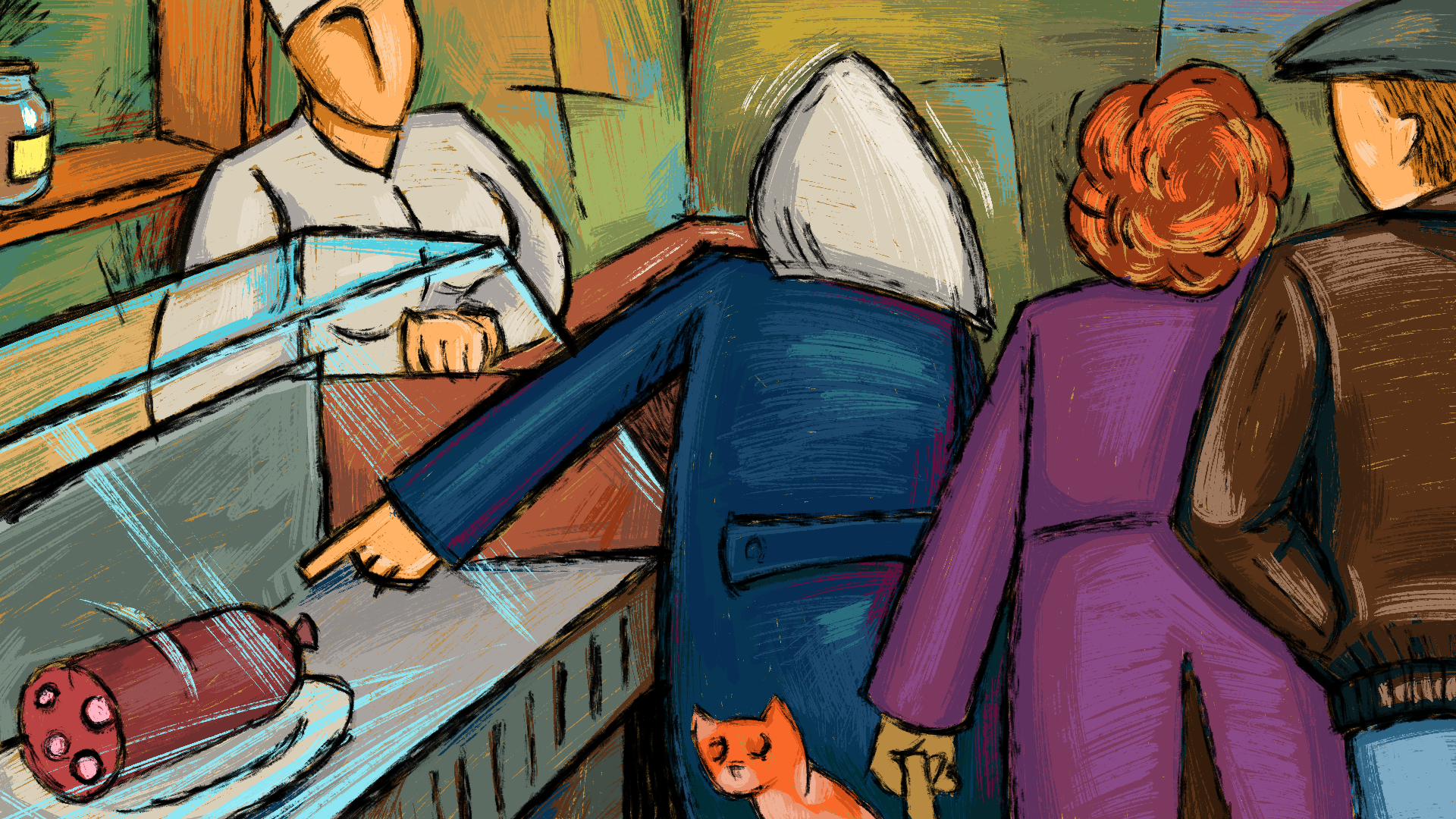 The Soviet citizens were up to the lack of consumer goods, even the basic ones.

(Oil prices drop from $24 to $12 per barrel in 1986, the USSR loses money from alcohol taxes, people lack consumer goods, sometimes even food)

Gorbachev: I establish the glasnost(“transparency”) policy! Now, comrades, you can discuss our problems and speak your mind. Also, as change is needed, I declare the perestroika(“rebuilding”), we’ll restructure our whole economic system. For this, we need to become more democratic, with less governmental control.

Kazakhstan: Sorry to interrupt, but in 1986 the first regional riots occur. The Kazakhs protest against an ethnic Russian from Moscow heading up the party in the republic.

USSR: We solve this conflict but there is far more…

Armenia and Azerbaijan: We have a conflict over the autonomous region of Nagorny Karabakh, populated mostly by ethnic Armenians but existing within Azerbaijan. Fighting occurs, hundreds of thousand refugees have to flee their homes!

Georgia: There are clashes between Georgians and Abkhazians! They want to secede from us and we won’t tolerate it. About 16 people die in the fighting.

Uzbekistan: We also have violent clashes – between the Uzbeks and the Meskhetian Turks. 103 people are left dead…

Gorbachev: Let’s calm down and solve all the issues peacefully and democratically. Nevertheless, our position is clear: No change of borders is allowed. We all live one state, after all.

Estonia, Latvia, and Lithuania: About that one state… our peoples remember that from 1920 to 1939 we lived as independent states. So we declare political sovereignty! Our republican laws now have priority towards the Soviet ones.

Azerbaijan: Me too, you, central authorities, are useless in solving my conflict with Armenia.

USSR: Wow! As if we didn’t have enough problems. We don’t accept your sovereignty. The economy is still no good, by the way. 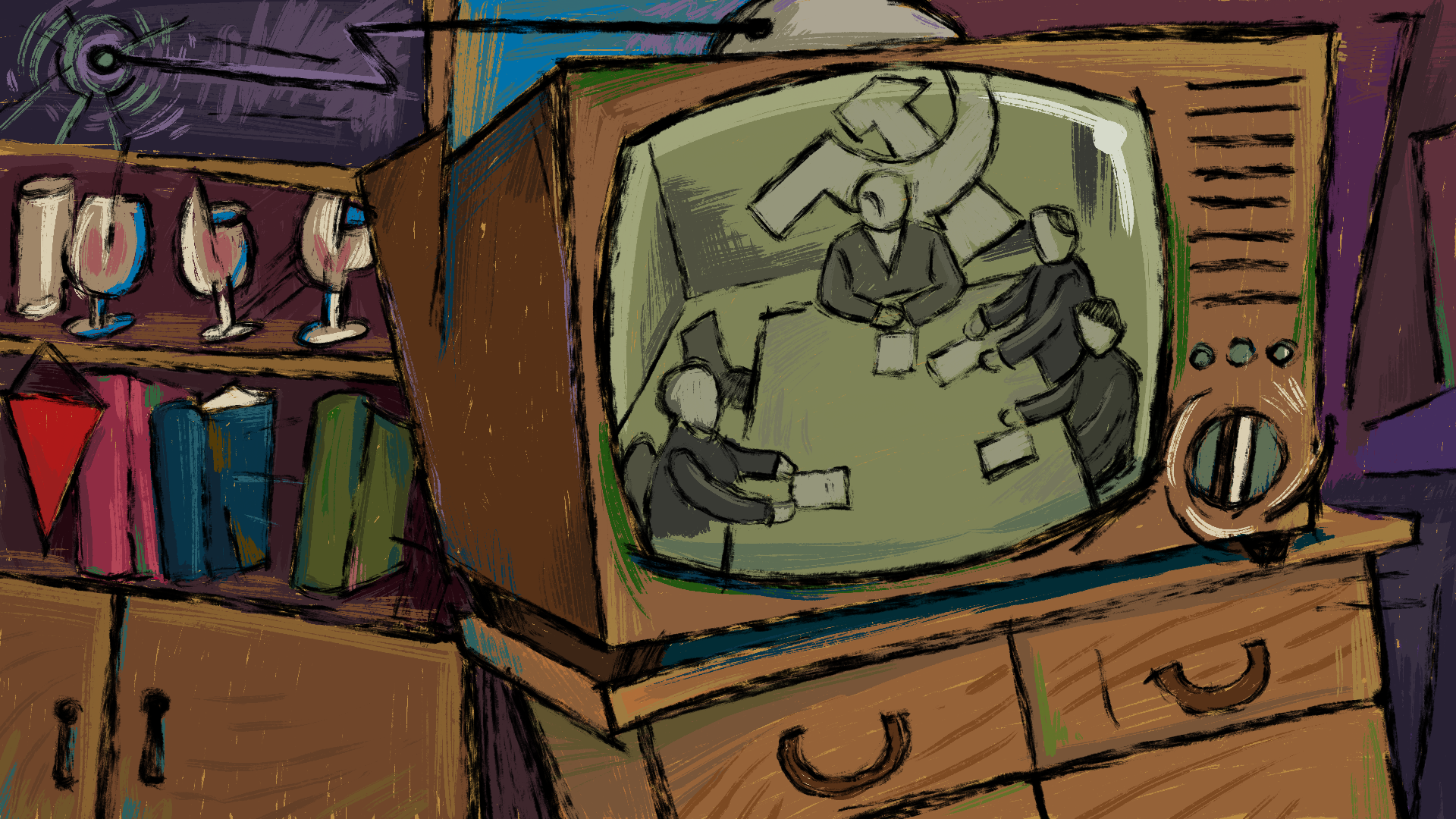 Faces in the Soviet TV were changing but the problems remained the same, over and over again.

Azerbaijan: The Baku pogrom happens in January – about 90 Armenians are killed.

Gorbachev: We can’t tolerate it, send in the troops!(Moscow sends the army to suppress the riots, between 130 – 170 citizens are killed, enraging the Azerbaijanis)

USSR: Even you, Russia?!

Boris Yeltsin: Yes, now I lead the Supreme Soviet of the RSFSR and rival Gorbachev in Moscow.

Soviet people: Great! What’s with the economy and empty shelves in shops

n: By the way, we also have sad news. During the Osh riots in June, the Kyrgyz and the Uzbek fight each other, from 300 to 600 people are dead

a: And we have a conflict between the Moldavian authorities and the Transnistria region which doesn’t want to secede from the USSR, the situation is heating up.

Estonia, Latvia, and Lithuania: Hey Moscow, you know what? Deal with it yourself. We declare full independence from the USSR, count us out.

Gorbachev: We need a new model of relations between the central authorities and republics! Let’s hold a referendum – we’ll find out if people from the Union are for it, with more power distributed to the republics. I’m sure – together we’ll save the Union!

Soviet people: But we won’t. 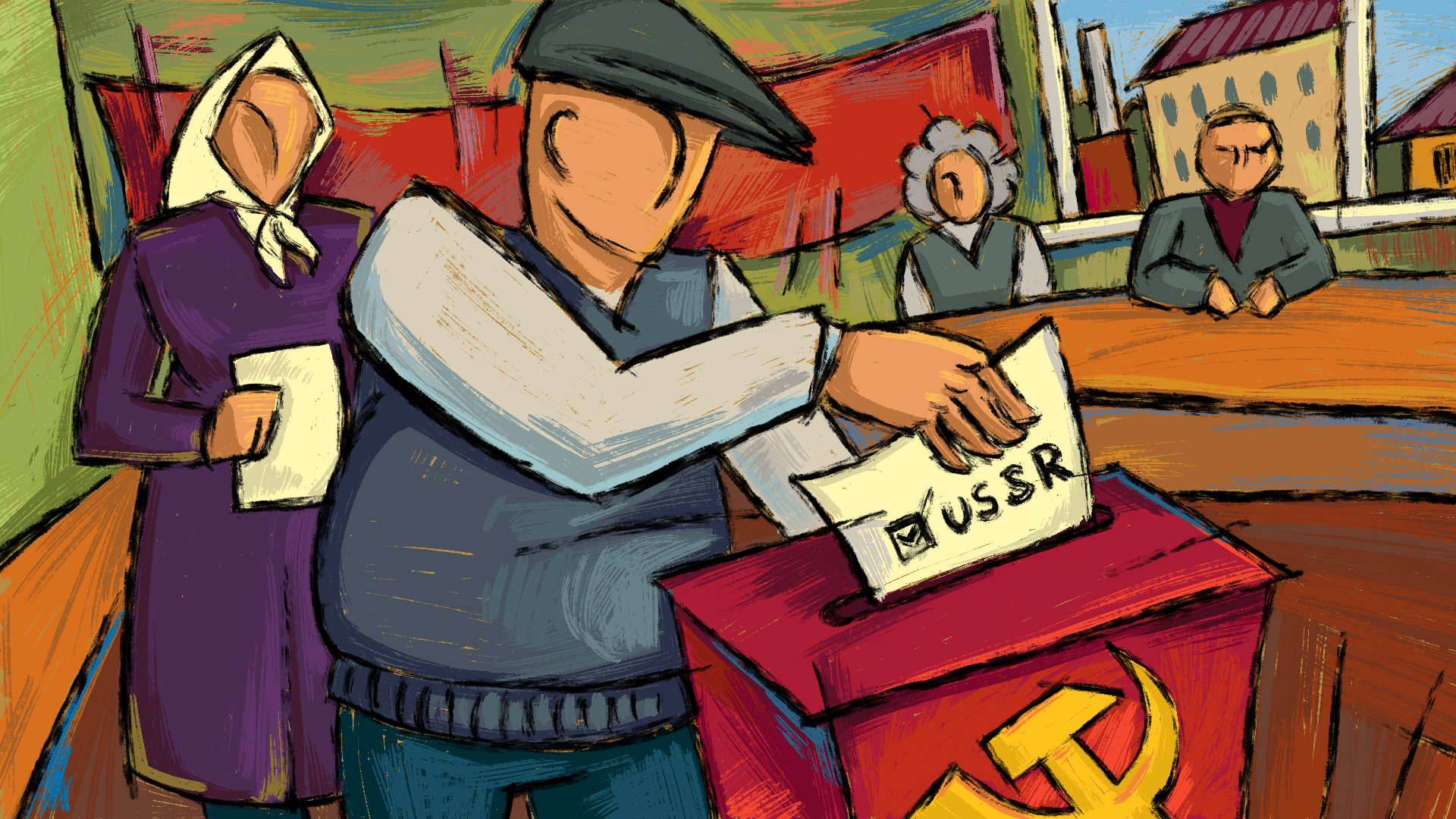 Many Soviet people voted for the preservation of the Union but it didn't help.

Soviet people: Okay, on March 17 we had a referendum on whether we need the preservation of the USSR

a, Georgia, Latvia, Lithuania, Moldova, and Estonia: Or did you? We even refused to participate

a: And I withdraw from the USSR, good luck.

Soviet people: Okay, the other nine republics took part in the voting! 76.4 percent voted for the preservation.

Gorbachev: Great. and the presidents of these nine republics are meeting to discuss the project of the newly-shaped Union.

Yeltsin: Meanwhile, I become the president of the RSFSR. We now have two presidents in Moscow – one for the USSR and one for Russia.

Gorbachev: Not that I am very happy about that but fine!

(Suddenly, on 18 August, eight high-ranking communists, including Gorbachev’s vice-president and prime minister form the SCSE and claim they now have supreme power)

Gorbachev: What’s going on? I’m having a vacation in Crimea right now …

SCSE: Stop this mess! We’ll keep the USSR good and united, with all 15 republics, not just nine! And we’re saying no to all this nonsense about free market and liberalization.

Soviet people:Hell no! We don’t want the Stalin era back.

(Army enters Moscow, thousands of Muscovites fill the streets. Receiving no orders from the SCSE, the soldiers mostly don’t attack the crowds. Only three people die in the clash. In two days, “the coup” is over and the SCSE members are arrested)

All republics (except for the RSFSR and Belarus):  Congratulations but we prefer to leave the Union.

Gorbachev: Wait, we still can sign a new treaty forming the Union of Sovereign States! A soft confederation that will give many rights to the republics.

Ukraine: We hold a referendum on Dec. 1 and ask the population whether they support full national independence - 90 percent say yes, so…

Yeltsin: I’m gonna meet Gorbachev on Dec.3 and tell him that without Ukraine, the closest nation to Russia, it’s senseless to sign a new treaty. Otherwise, in a new the Asian republics will dominate and have more votes than Russia and Belarus.

Gorbachev: Wait, so this is it?!

(On Dec. 8 Yeltsin meets the presidents of Ukraine and Belarus and the Belavezha Accords. The USSR ceases to exist, they establish the Commonwealth of Independent States (CIS), an international organization with no power to control its members. Two weeks later, eight more republics – all except Georgia and three Baltic ones – join the CIS, which means that there is no USSR anymore)

(Gorbachev retires on Dec.25. The Soviet flag is removed from the Kremlin and replaced with the Russian tricolor. From now on, it’s everyone for themselves, Boris Yeltsin leads a new Russia – and has 8 years of troubles ahead of him.)

If you like this story, read another 'play', on how Russia sold Alaska to the United States.