Trump calls for U.S. withdrawal from INF Treaty - But why was it signed in the first place? 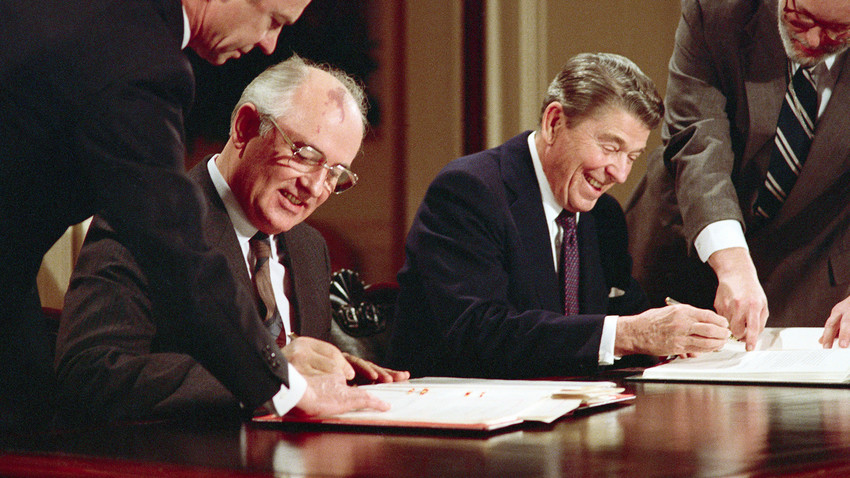 Getty Images
Just over 30 years ago, Ronald Reagan and Mikhail Gorbachev agreed that the U.S. and the USSR would destroy an entire class of nuclear weapons in order to prevent a devastating military conflict in Europe. Now, the U.S. might terminate this treaty.

President Donald Trump said on Oct. 21 that the U.S. plans to withdraw from the Intermediate-Range Nuclear Forces Treaty (INF), which is a weapons agreement signed in 1987 by U.S. President Ronald Reagan and Soviet leader Mikhail Gorbachev.

“We’re going to terminate the agreement and we’re going to pull out,” Trump said to journalists during a rally in Nevada.

While political analysts are discussing the possible consequences, it’s important to understand what the original treaty meant. The road to the INF was a rough one  – Europe was on the brink of nuclear war. To understand the treaty’s importance, we must answer a couple of questions.

In 1977, as part of plans to modernize its arsenal, the USSR unveiled a new missile to be deployed in Eastern Europe – the intermediate-range SS-20 Saber. This was shocking news for Western Europe: the three 150-kiloton nuclear warheads were not regulated by existing arms treaties and could hit any city in Western Europe, reducing them to ruins before NATO or the U.S. could react.

According to international classification, this category of nuclear forces includes nuclear missiles with ranges of 500 – 1,000 kilometers (short-range), and 1,000 – 5,500 km (intermediate-range). Such missiles can reach their targets faster than intercontinental ballistic missiles, and what’s most important, their comparatively short range meant that they were not covered by the Strategic Arms Limitation Treaty of 1972.

3. Why did the USSR threaten Europe?

The goal was to replace old SS-4 and SS-5 missiles with SS-20s and guarantee Soviet superiority in Europe. Nevertheless, such a step contributed to a rapid deterioration in relations with the West.

“Both the West and China were seriously concerned with the deployment of that weapon,” wrote historian Alexei Bogaturov. “It was seen as evidence that the Soviets were preparing for a limited nuclear war.”

Western Europe felt most vulnerable: a possible massive Soviet strike could wipe out Europe’s entire military infrastructure before their American allies could even react.

4. What was the West’s reaction?

The U.S., as the leader of NATO, acted resolutely. In 1983, new American missiles were deployed:  the Pershing II in West Germany, and several other ground-launched cruise missiles in Belgium, Italy, the Netherlands, and the UK. These missiles could hit targets in most areas of Soviet-controlled Europe.

Both Soviet and Western politicians understood that reducing tensions was imperative: Europe was like a powder keg ready to explode. Several rounds of talks failed in large part because three Soviet leaders – Leonid Brezhnev, Yuri Andropov and Konstantin Chernenko - died during negotiations. Finally, in 1987, Mikhail Gorbachev and Ronald Reagan reached an agreement and signed a treaty.

The INF treaty called for both the U.S. and the USSR to dismantle all of their short-range and intermediate-range missiles (those with a range of 500 to 5,500 km). Also, Moscow was to destroy its missile not only in Europe but in Asia as well.

Both sides fulfilled the terms of the treaty, with the USSR destroying 1,846 missile systems and the US – 846, which was all that they had.

“It was a breakthrough: for the first time in history both sides managed to agree to dismantle a whole class of brand-new, highly effective weapons, which really improved the situation in Europe and in the Far East,” wrote Alexei Bogaturov.

The INF treaty became a milestone in ending the Cold War, reducing international tensions and making the world a better place. Now, that achievement might be undone.

While Mikhail Gorbachev was rather successful in the international arena, he faced lots of troubles back home. Here we have an article on how the USSR came to collapse during his time in office.