Leon Trotsky opens up about Stalin, NY and the Revolution 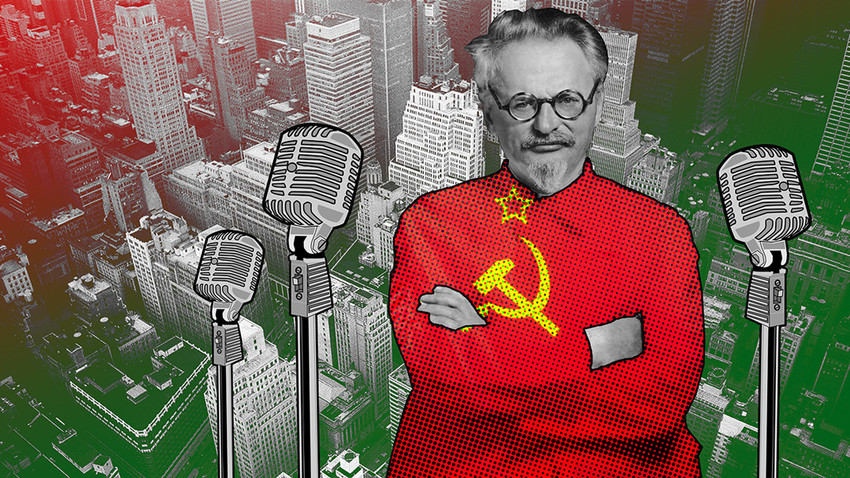 Leon Trotsky always had something to say, not only about the revolution.

Pexels, Pixabay, Getty Images
From beyond the grave, the disgraced Russian revolutionary leader opens up and shares his thoughts on various important issues that people have been wondering about for decades.

- Comrade Trotsky, your birthday is this month –  Nov. 7. Of course, this is the same day that the Revolution happened, which you orchestrated with Vladimir Lenin. What do you think about such a coincidence?

- I myself noticed this odd coincidence only three years after the October uprising.  Mystics and Pythagoreans will probably  draw from this whatever conclusions they like.

- Taking into consideration the life you led, it’s easy to think of fate. It was quite a life, wasn’t it?

- Until I was nine years old I lived in a remote little village. For eight years I studied at school. I was arrested for the first time a year after I left school. For universities, like many others of my time, I had prison, Siberia, and foreign exile. In the Czar’s prisons I served four years in two periods. In the Czarist exile I spent about two years the first time, a few weeks the second. I escaped from Siberia twice. As a foreign immigrant, I lived for about twelve years altogether in various European countries and in America. I took part in the revolutions of 1905 and 1917, and I was the chairman of the St. Petersburg Soviet of delegates in 1905, and again in 1917. As People’s Commissary for military and naval affairs, I devoted about five years to organizing the Red Army and restoring the Red Navy.

- Wow, that’s impressive. Were you always an adventure seeker since your younger years?

- By natural inclination, I have nothing in common with seekers after adventure. I am rather pedantic and conservative in my habits. I like and appreciate discipline and system. Not to be a paradox, but because it is a fact, I must add that I cannot endure disorder or destruction.

- So speaks the man who destroyed a 300-year-old empire! What led you to the revolutionary movement?

- I had an intense hatred of the existing order, of injustice, of tyranny. Whence did it come? It came from the conditions existing during the reign of Alexander III; the high-handedness of the police; the exploitation practised by landlords; the grafting by officials; the nationalistic restrictions; the cases of injustice at school and in the street; the close contact with children, servants and laborers in the country…  the entire social atmosphere of the time

- Soon after graduating from school you organized several revolutionary circles in Ukraine. In 1898, you were imprisoned for the first time. What was your impression of the Tsar’s prisons?

- In my first prison in the city of Kherson, my isolation was absolute and hopeless. I received  no parcels from the outside. Some stew was given once a day, for dinner. A ration of rye bread with salt was breakfast and lunch. For three months I had to wear the same underwear, and I had no soap. The vermin were eating me alive. That was my 19th year. The solitude was absolute, worse than anything I ever experienced afterward, although I served time in nearly 20 prisons. Taking it all in all, I can hardly complain about my life in prison. It was a good school for me.

- In 1905, you fled Russia and spent around 12 years abroad. Which city do you remember the most?

- New York impressed me tremendously because, more than any other city in the world, it is the fullest expression of our modern age. A city of prose and fantasy, of capitalist automatism, its streets a triumph of cubism, its moral philosophy that of the dollar. As I look enviously at New York – I still think of myself as a European, but I ask myself: ‘Will Europe be able to stand it? Will it not sink into nothing but a cemetery? And will the economic and cultural centres of gravity not shift to America?’” And despite the success of what is called “European stabilization,” this question is just as pertinent today.

- Then you came back to Russia to lead the Revolution with Lenin. What do you remember the most from 1917 and the Civil War?

- Life was a whirl of mass meetings. Meetings were held in plants, schools, and colleges, in theatres, circuses, streets, and squares. I usually reached home exhausted after midnight... Each time it would seem to me as if I could never get through this new meeting, but some hidden reserve of nervous energy would come to the surface, and I would speak for an hour, sometimes two.

- During the Civil War, you were in charge of the army and ordered the execution of tens of thousands of people, according to the most modest assessments…

- An army cannot be built without reprisals. Masses of men cannot be led to death unless the army command has the death-penalty in its arsenal. So long as those malicious tailless apes that are so proud of their technical achievements – the animals that we call men – will build armies and wage wars, the command will always be obliged to place the soldiers between the possible death in the front and the inevitable one in the rear. And yet armies are not built on fear.

- And what about executing the imperial family? Why couldn’t you just let Nicholas II and his relatives flee abroad?

- That severe punishment showed the world that we will fight ruthlessly and nothing will stop us. Executing the imperial family was necessary not only to frighten and shock the enemy but also to tell our soldiers that there’s no way back and we will face ultimate victory or death.

- And what do you think about Joseph Stalin who drove you away from power after Lenin’s death, forcing you to flee the country, ruining your name and then ordering to kill you?

- Stalin is the outstanding mediocrity in the Bolshevik party. During the most crucial months of the theoretical and political preparation for the uprising, Stalin simply did not exist, in the political sense. With his enormous and envious ambition, he couldn’t help but feel his own intellectual and moral weakness.

As I was informed, Stalin repeatedly admitted that sending me to exile instead of executing me was “a tremendous mistake”. Hence, he had nothing to do but plot a terrorist act against me.

- He succeeded – in 1940, Stalin’s agent murdered you with an ice axe. You lost everything and died alone, in exile, pursued by enemies. What were you thinking just before you died?

- Just months before the assassination I wrote in my diary: “I will die a Proletariat revolutionary, a Marxist, which means a devoted Atheist. My faith in the Communist future is now just as fervent and even stronger compared to the times of my youth. This faith in mankind and its future gives me the power to resist stronger than any religion.

Disclaimer: All of Leon Trotsky’s “answers” are actual excerpts from his diary and autobiography, My Life.

Before Trotsky, we spoke to Leo Tolstoy - check out an interview with one of the greatest authors in history.