5 most stunning historical shops in Moscow 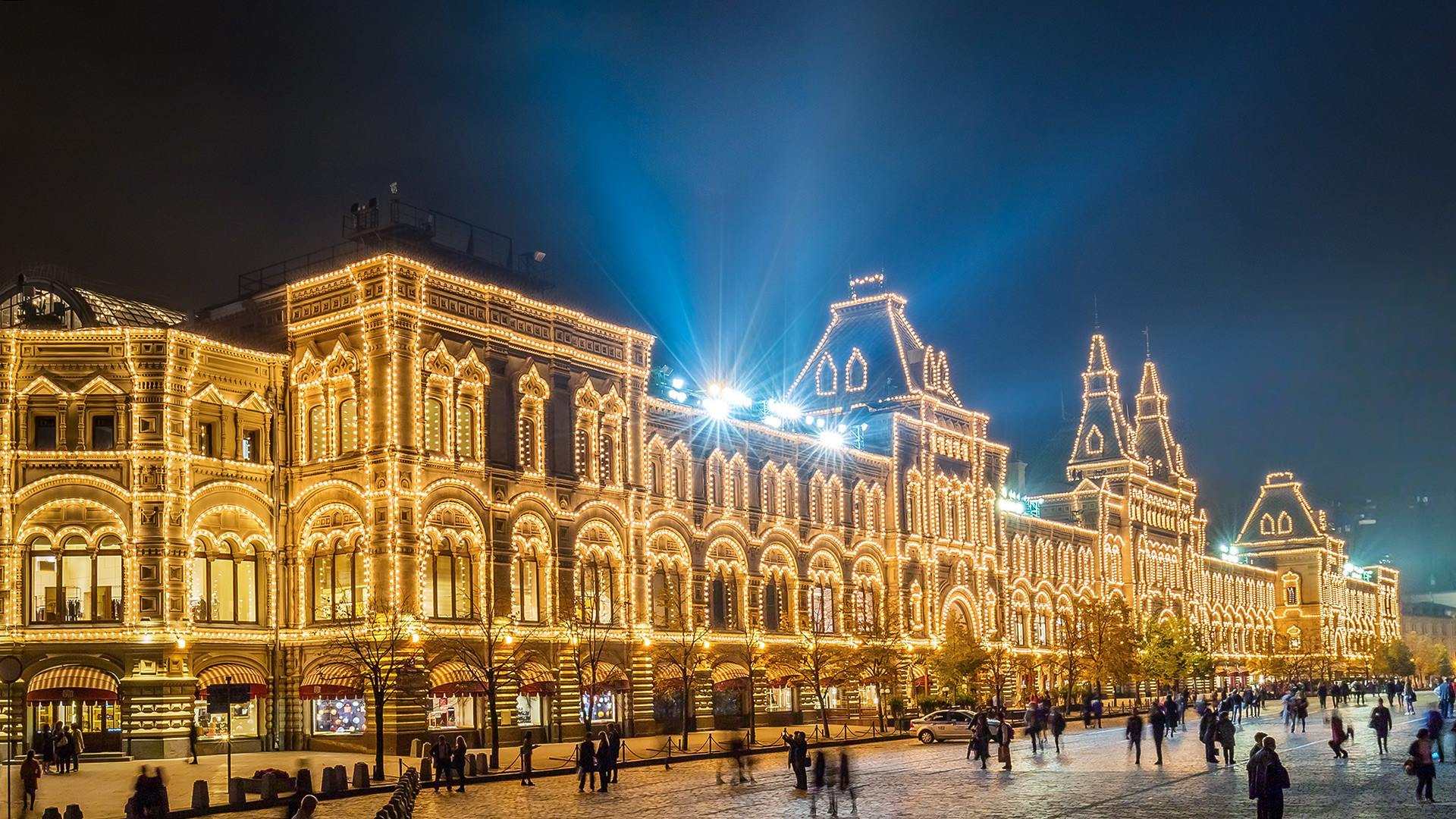 Diego Delso/Wikipedia
Shopping can be a cultural leisure activity, if you know where to go.

The building that houses the store today was built in the late 18th century by order of Ekaterina Kozitskaya, daughter of a major industrialist and wife of Catherine the Great’s cabinet secretary. Incidentally, the side street on the corner of which the building stands is named after her. 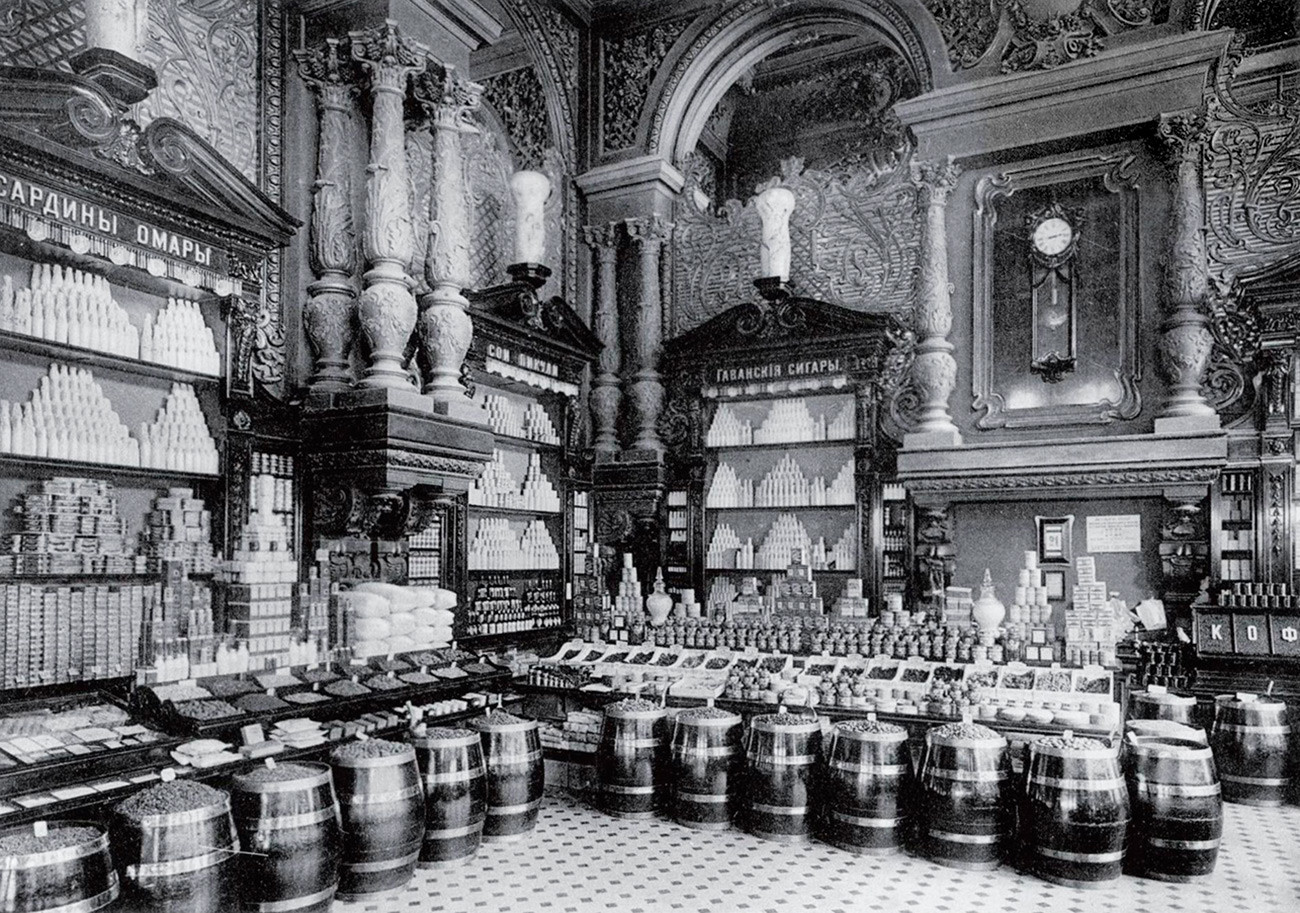 The mansion was built by architect Matvey Kazakov, who designed the old building of Moscow University, the Senate Palace inside the Moscow Kremlin, and a dozen other buildings in the center of the capital.

In 1901, the building was purchased by millionaire merchant Grigory Yeliseev and turned into the Yeliseev Store and Russian and Foreign Wine Cellars. A while later, he opened another store with Art Nouveau interiors, this time in his native St. Petersburg; it too still works to this day. 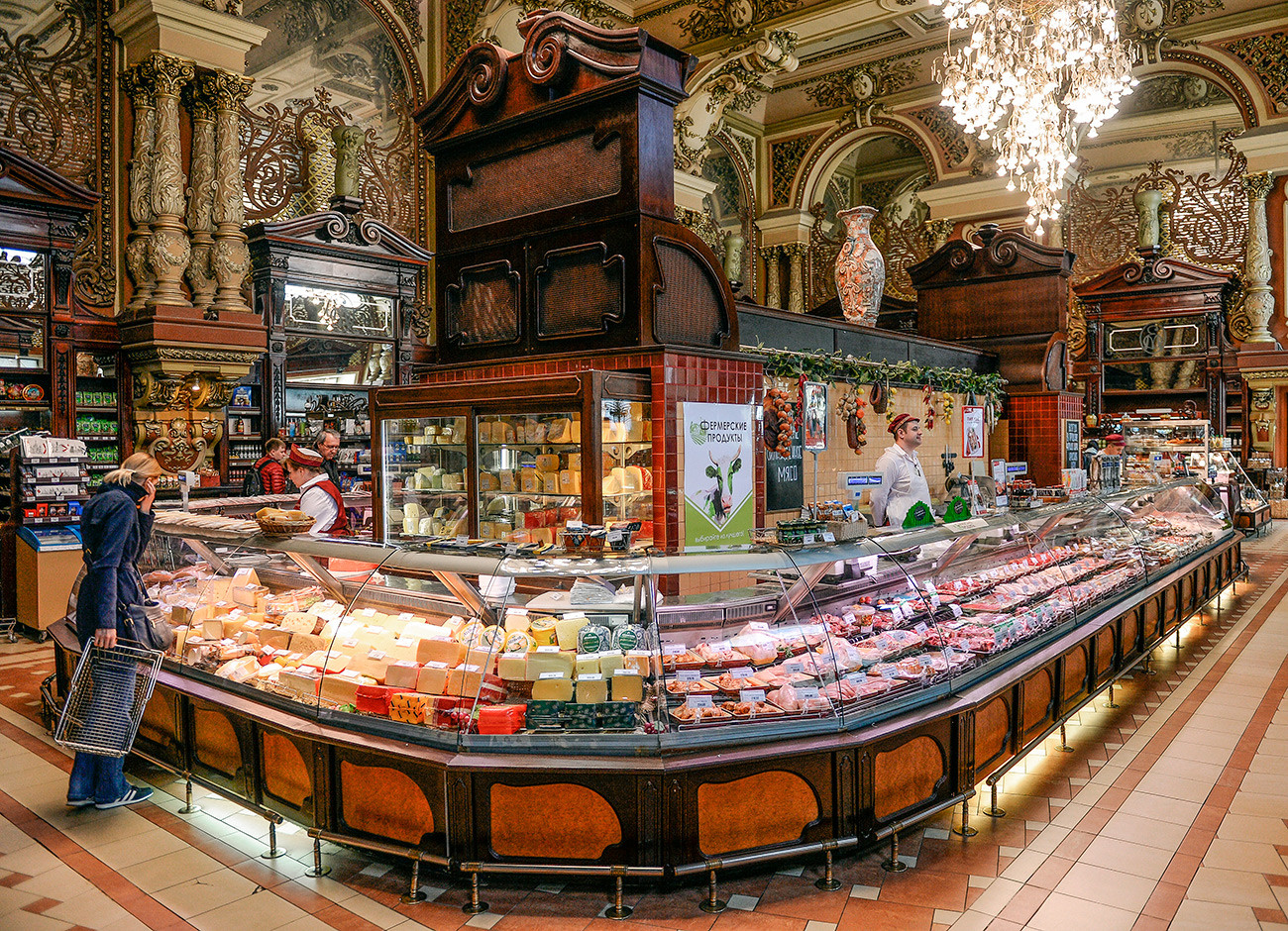 In Soviet times, the store in Moscow was renamed Gourmet Store No. 1, but for the people it was forever “Yeliseevsky.”

This pseudo-Russian style edifice, mixed with the neoclassical, was built in 1893. The steel curves on the roof were designed by the legendary engineer and architect Vladimir Shukhov. As the first ever arcade in Russia, GUM became the most fashionable place in Moscow as soon as its doors opened. 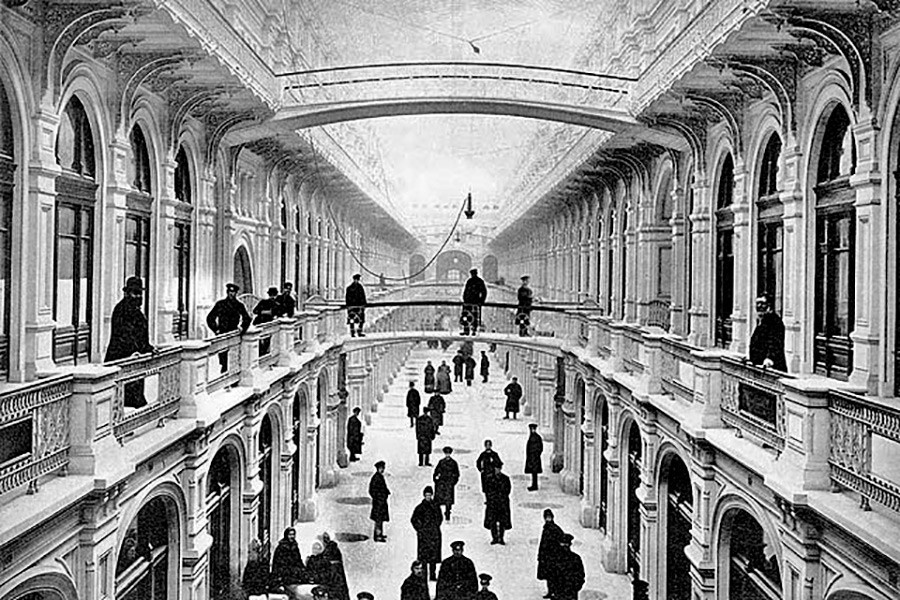 Vladimir Lenin decreed that the building should house the State Universal Store (abbreviated in Russian as GUM), a future Soviet symbol. Despite various attempts to turn it into a ministry, and Stalin’s preference to knock it down, the people’s store survived. It remains the favorite haunt of many Muscovites.

Today, the GUM department store is truly universal, full of high-end shops selling clothes, equipment, and other products, as well as cafeterias and a movie theater. 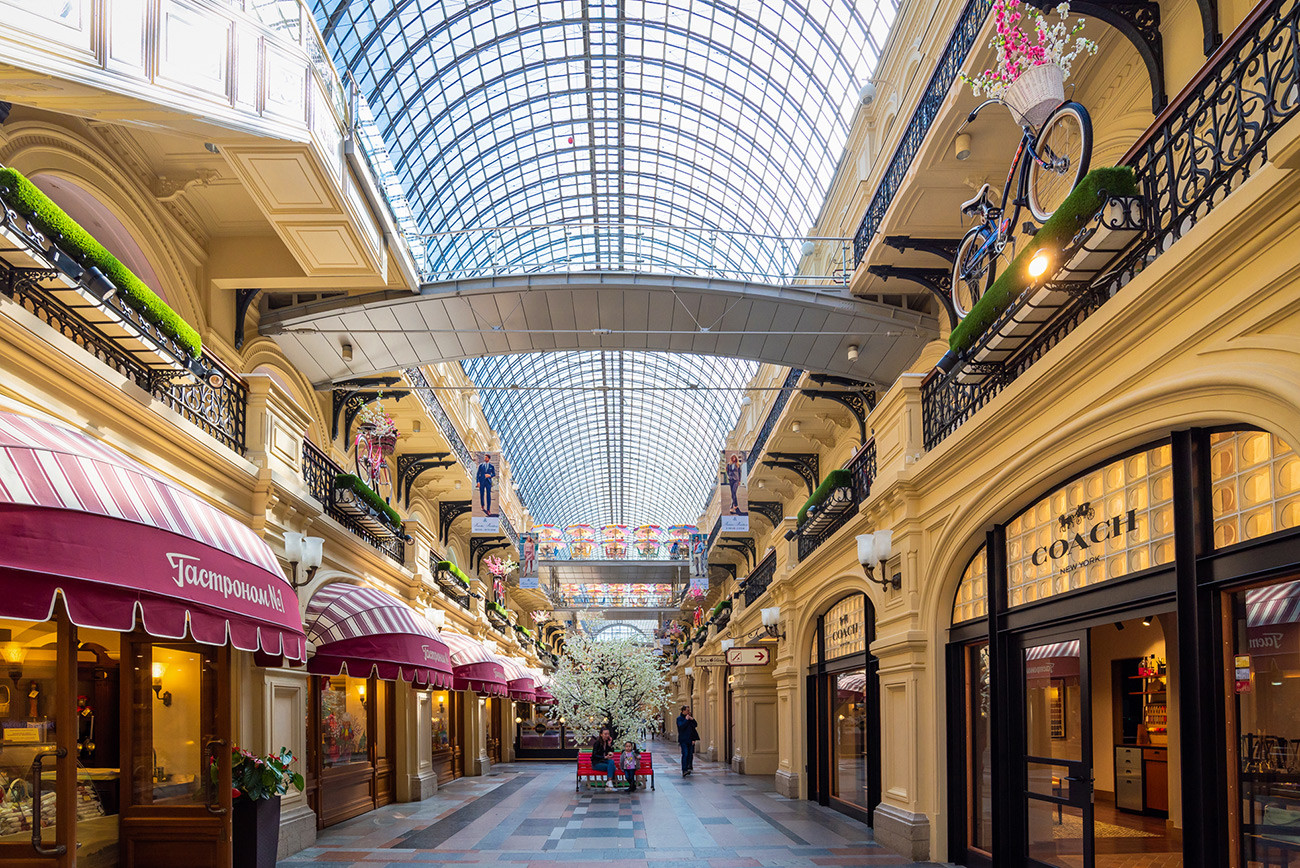 Be sure to try the trademark ice-cream, sold at special kiosks by the entrance—the defining taste of childhood for any Russian.

Built in the 1950s on Lubyanka Square, opposite the KBG headquarters ironically, Detsky Mir was a real paradise for children. It was probably the only place in the country with absolutely everything for children of all ages. Soviet children dreamed of riding the enormous merry-go-round and playing with the huge mechanical toys in the central hall. 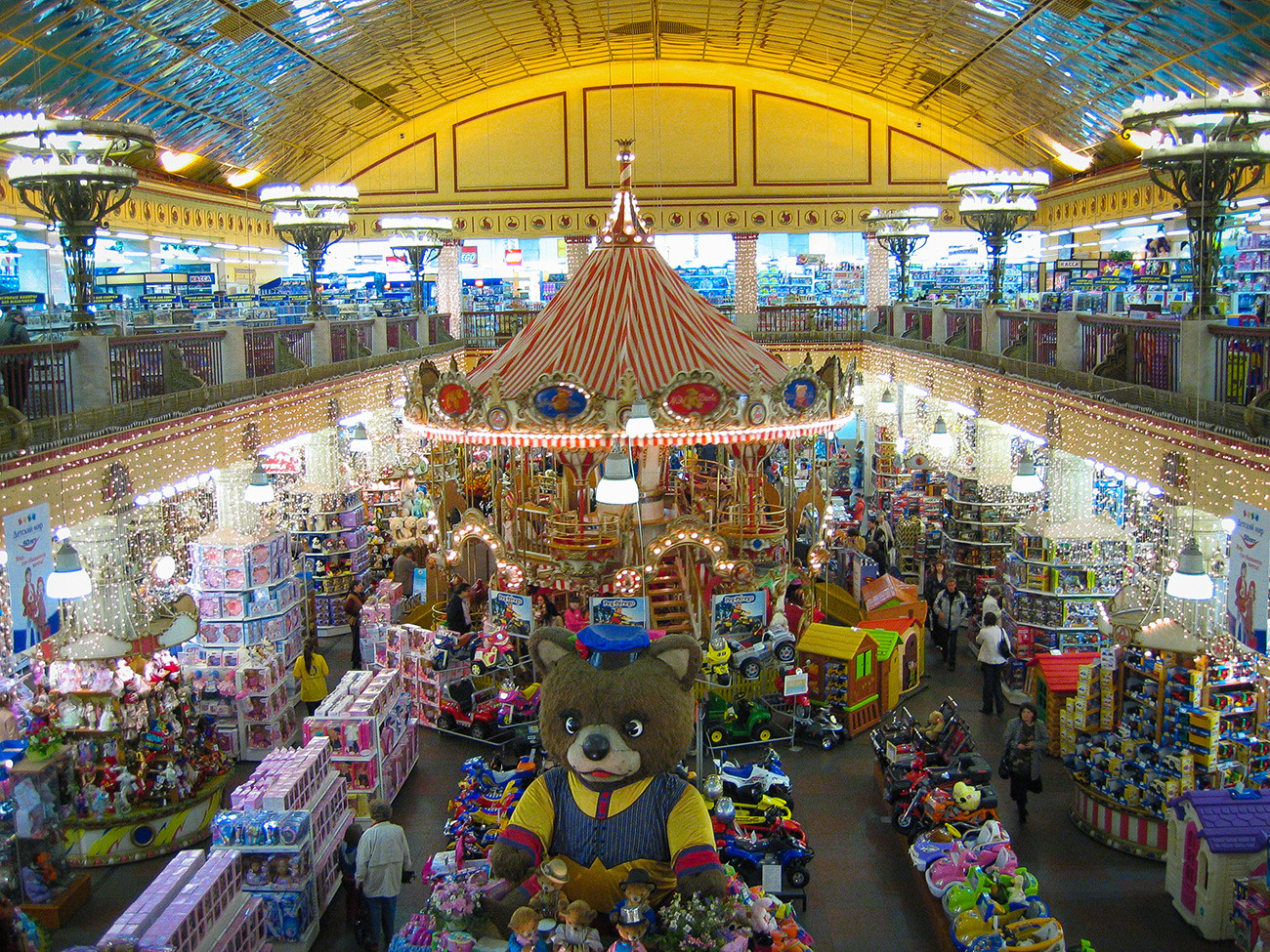 Detsky Mir before the reconstruction

Over time, the store gradually turned into a multi-purpose shopping center, and departments for adults began to pop up selling gifts, clothes, and stationery. 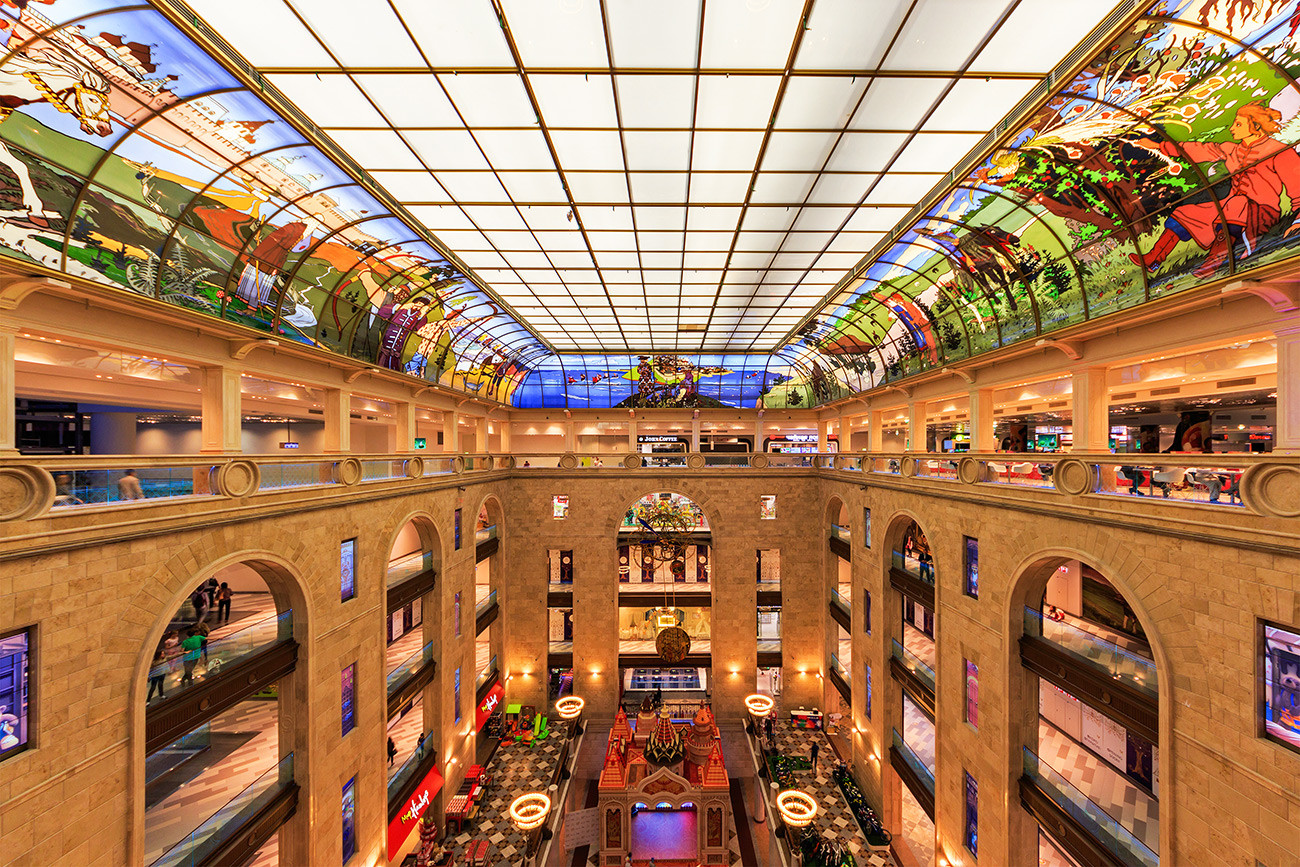 Detsky Mir after the reconstruction

From 2008 to 2015, the store was closed for renovation. Whereas the exterior underwent a minor nip and tuck, the interior decor had major surgery—in particular, the Soviet bronze lamps and chandeliers, and even the sacred carousel, were removed. 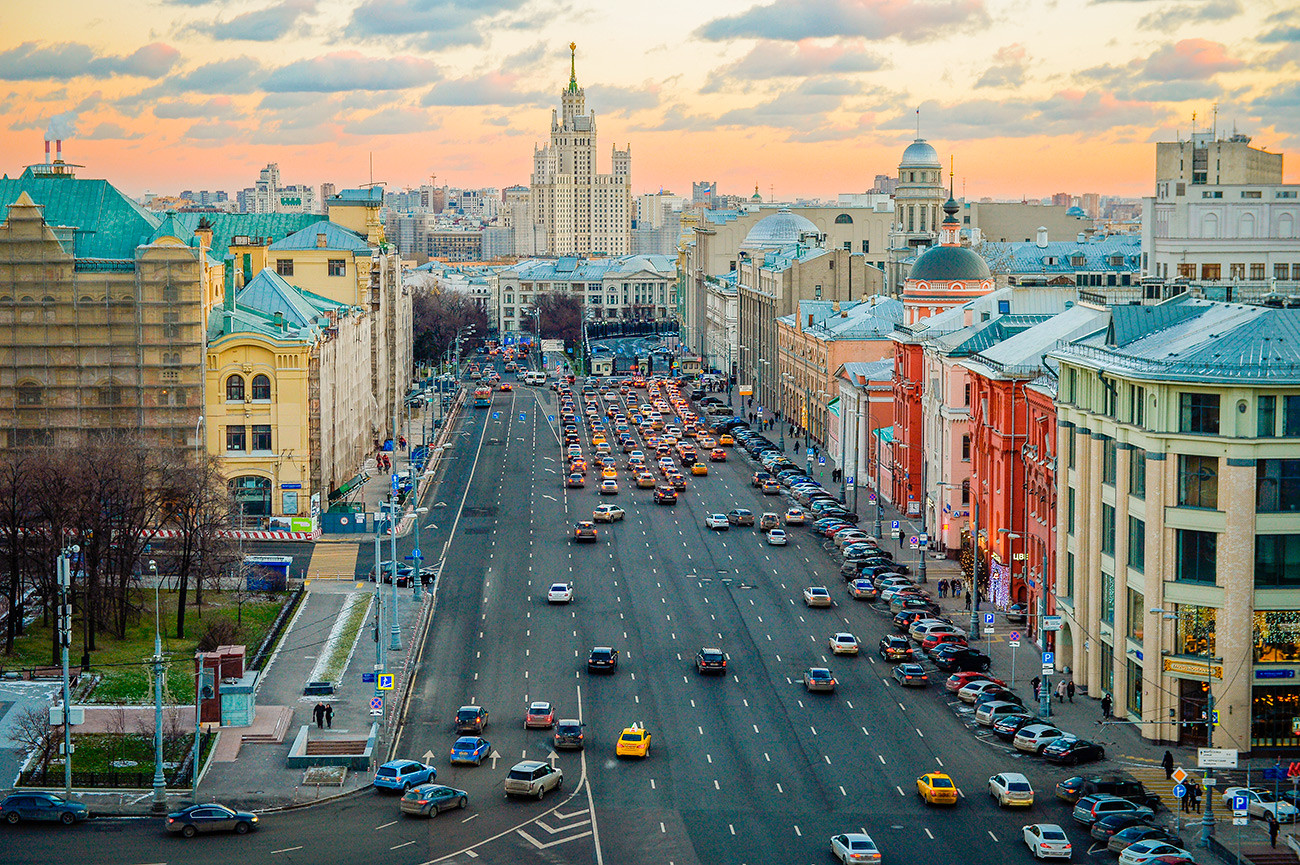 View from the Detsky Mir rooftop

Today, the place resembles an ordinary mall, but with goods exclusively for children. Non-children (aka adults) are recommended to visit for the rooftop viewing platform, offering breathtaking views of Moscow.

Historically, Kuznetsky Most street was always one of the main marketplaces in Moscow. Hence, in 1885, two Scottish merchants opened a store there, which they named Muir & Mirrielees after themselves. 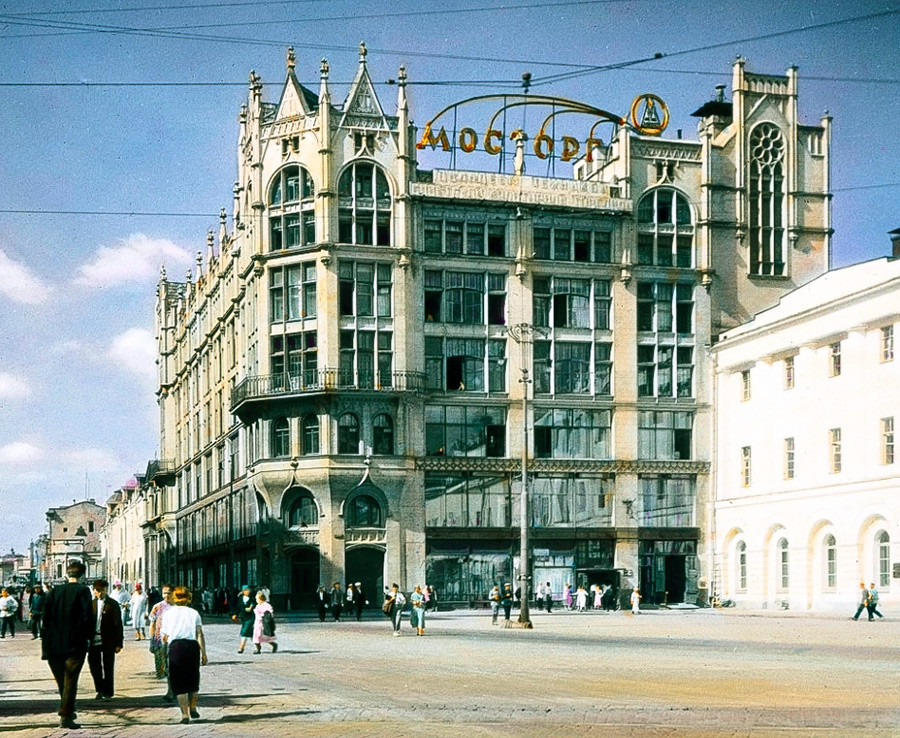 The original building was badly damaged by fire, so at the beginning of the 20th century architect Roman Klein (designer of many churches and factories) erected a new seven-story edifice in the neo-Gothic style. 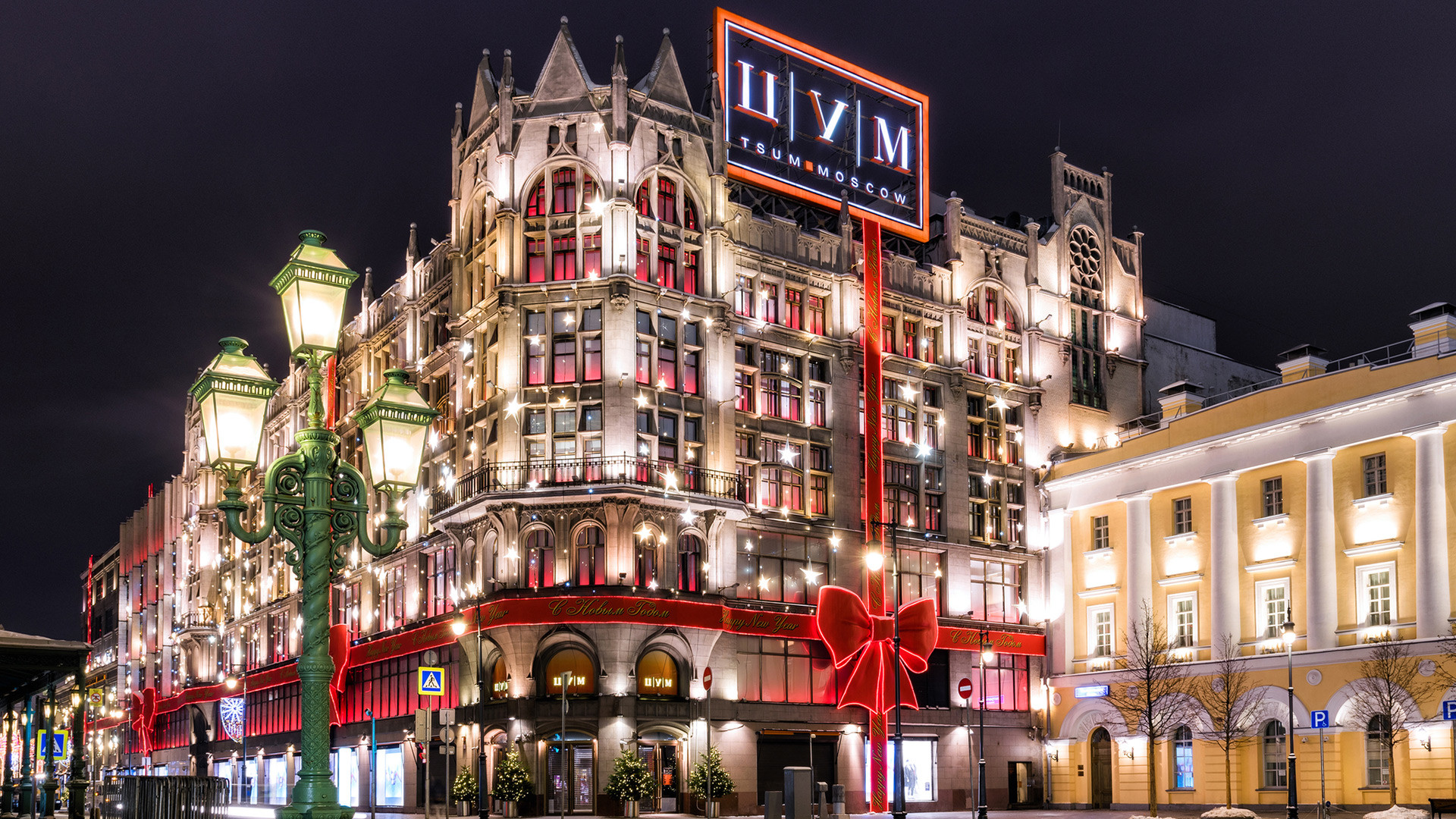 Post-revolution, the store became state property and was renamed the Central Universal Store (Russian abbreviation: TsUM). It began selling luxury goods back in the 1950s (in contrast to the more affordable GUM, located nearby), and still does—boutiques and fashion houses from around the world are located here.

If you’re put off by the crowds of tourists at GUM, then come here instead. Petrovsky Passage is an arched arcade, but much smaller than its Red Square cousin, with only two rows yet plenty of unique neoclassical architecture to admire, not to mention the huge glass dome designed by Shukhov (just like GUM's roof).

The arcade was commissioned in 1906 by the owner of the famous Sandunovsky Baths, Vera Firsanova. It housed shops belonging to Moscow merchants, including confectionery products from the famous Abrikosov dynasty. 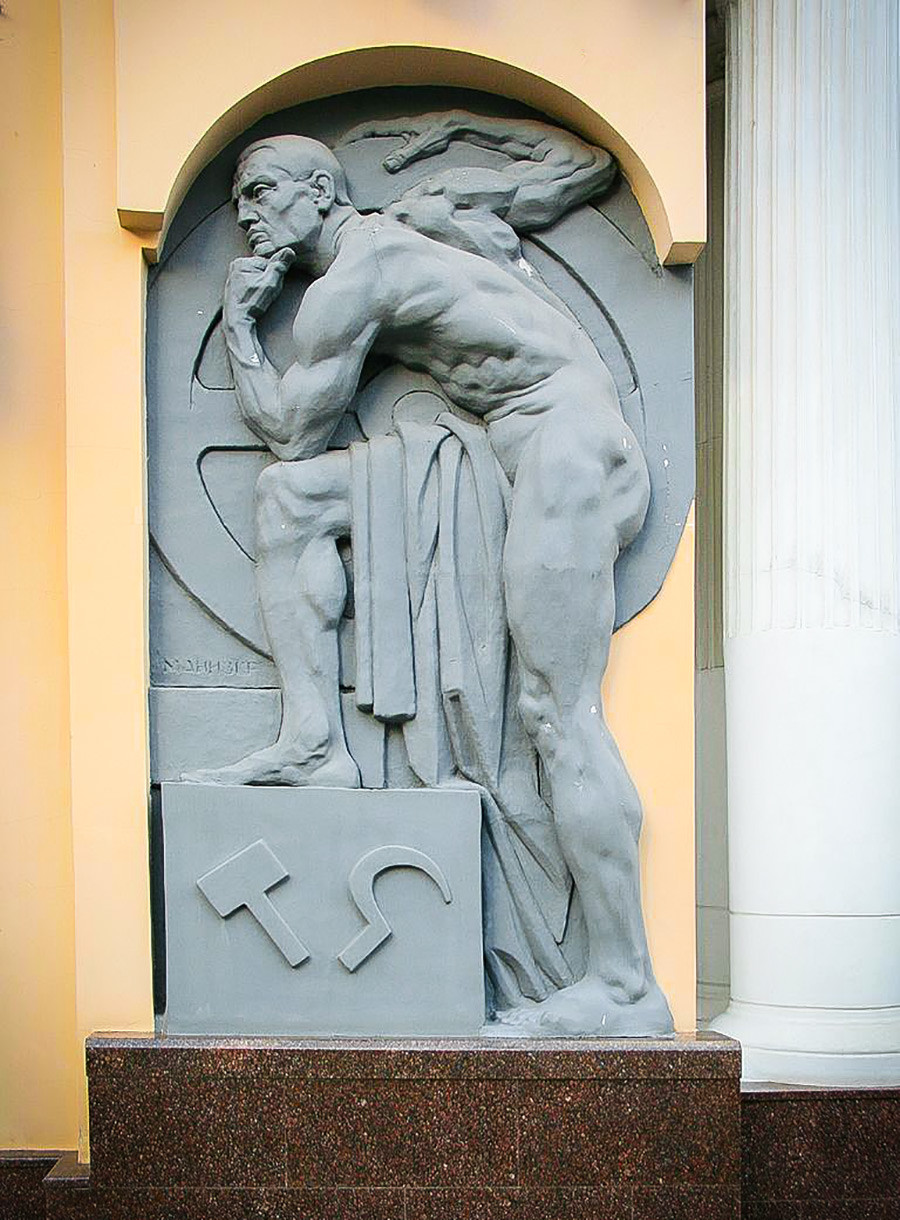 Under Soviet rule, the building was nationalized and converted into a Red Army clothing factory, followed by a research center, and then a communal apartment for residents of buildings destroyed during WWII. 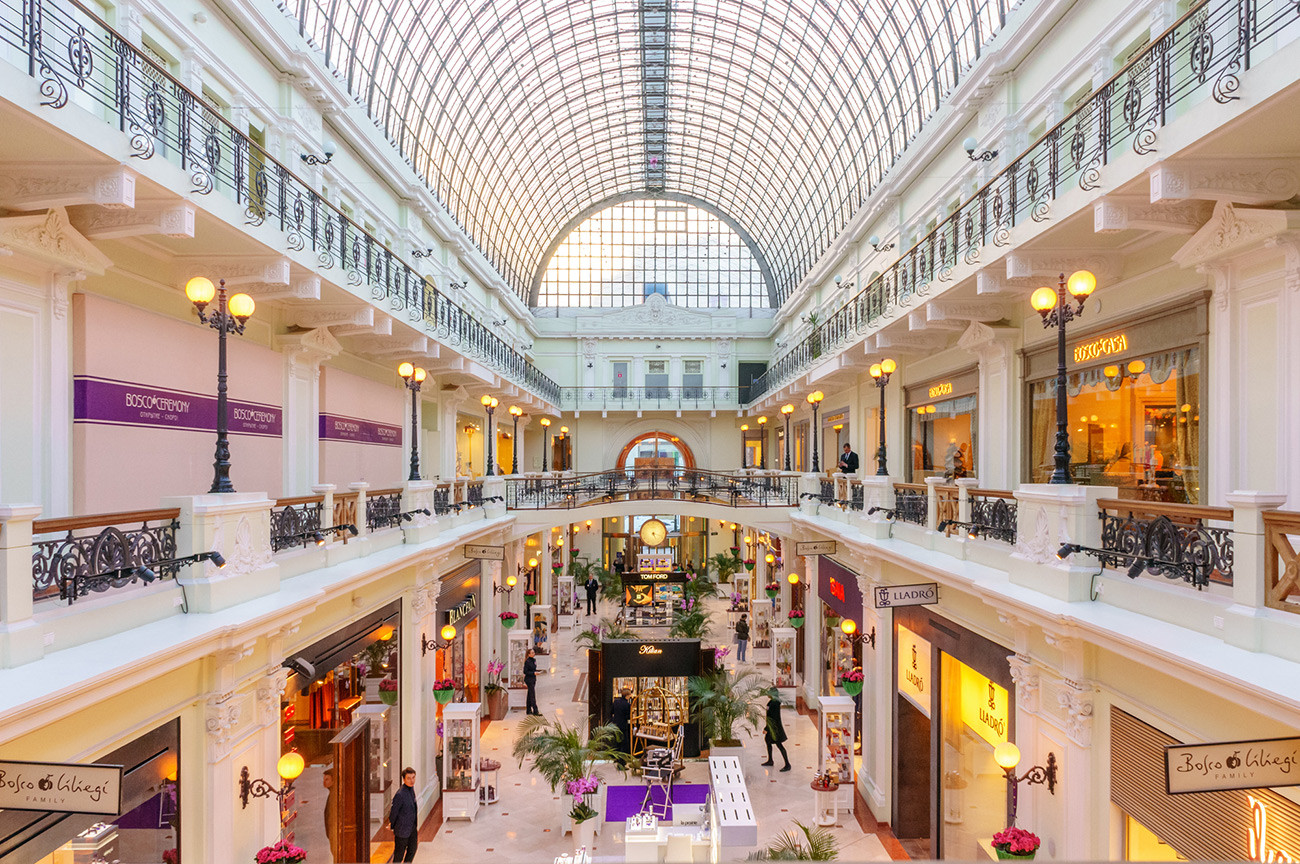 Today, shoppers at Petrovsky Passage can find luxury boutiques and cafes. It has become an ordinary department store, albeit high-end.