5 facts about Yuri Andropov, the only KGB agent to rule the USSR

Eduard Pesov/Sputnik
From oppressing the uprising in Hungary to anti-corruption crusades and attempts to save the Soviet economy – Yuri Andropov (1914 – 1984) led an interesting life.

Born on June 15, 1914, Yuri Andropov spent just the last 15 months of his life as the leader of the Soviet apparatus, with his health rapidly deteriorating. Nevertheless, before that, he was in charge of the KGB, the powerful intelligence agency, for about 15 years. Some people consider him a rigorous bureaucrat, some – a liberal who would have managed to escape the USSR's collapse if he had had enough time. So who was he? 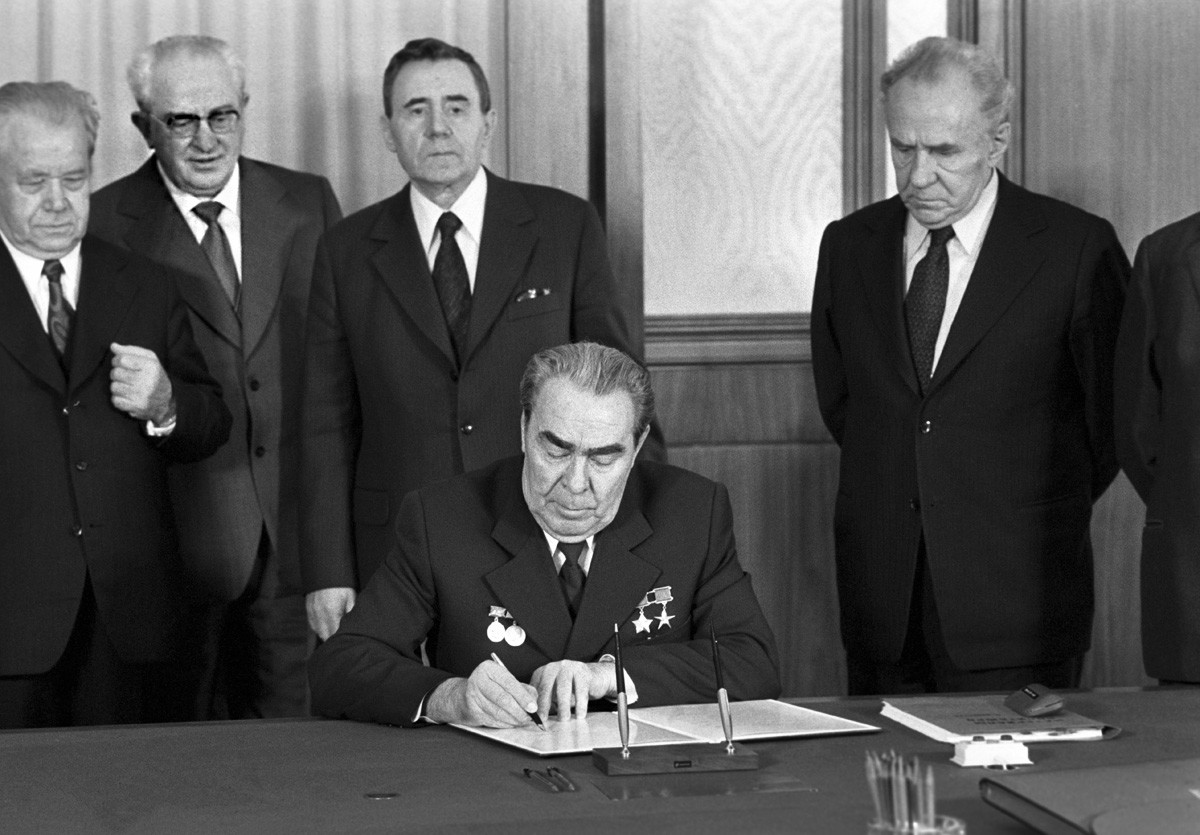 Andropov (second left) standing among the other Soviet party bosses, including Leonid Brezhnev.

Andropov himself always was vague about his life, starting from his family roots. Rumors had circulated that his grandfather was a rich merchant of Jewish origin – but Andropov always denied it. He also never spoke of his own family: for five years he was married and had a son, but hardly communicated with him or his ex-wife after the divorce.

Professionally, Andropov was a man of secrets as well – the high post he took required that. “People barely knew him as the KGB chief; in every country, people who lead the secret service don’t usually seek publicity and cannot expect to be popular. Especially in such a country as the USSR,” wrote publicist Roy Medvedev in his book Unknown Andropov. And when he suddenly went public, inheriting power from Leonid Brezhnev in 1982, he reigned too short a time to shape any meaningful public image.

2. Suppressed the uprising in Hungary 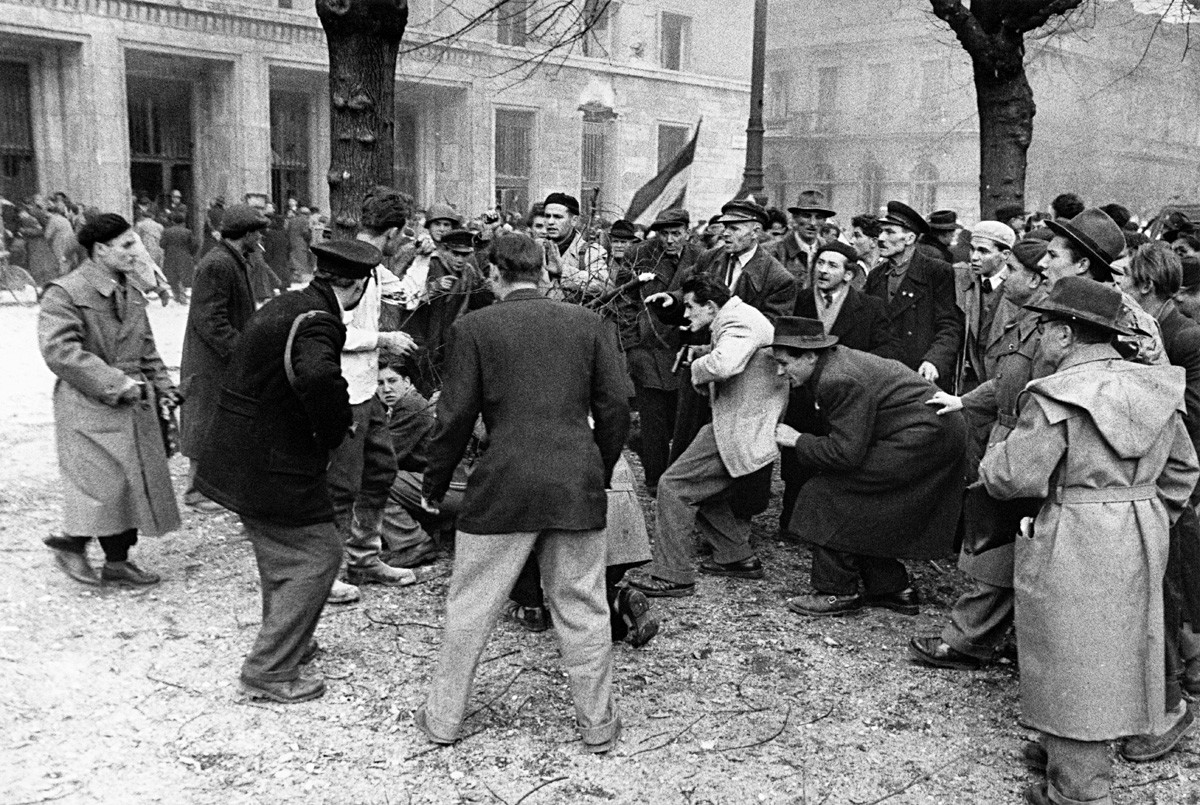 The revolt of the Hungarian people against the Socialist government (Budapest, November 1956). As a Soviet ambassador, Andropov helped to suppress the revolt.

Andropov’s career moved up rapidly when was appointed ambassador to Hungary in the Ministry of Foreign Affairs in 1954. Two years later, the Hungarian uprising broke out – a part of society was demanding independence from the socialist state.

It quickly turned into an armed conflict. Andropov called the events “counter-revolutionary, an anti-social riot” while communicating with Soviet leaders and supported the idea of helping the Hungarian socialist government by sending troops. He coordinated the actions of the pro-Soviet forces in Hungary, which, along with the arrival of Soviet soldiers, helped to keep Hungary socialist. More than 2,500 people died during the conflict.

In 1957, Andropov left Hungary for Moscow – but never forgot the image of enraged crowds killing police officials. Soviet diplomat Oleg Troyanovsky remembered: “Andropov kept on speaking about the events of 1956 in Hungary. He often said: ‘You can’t imagine what it is – hundreds of thousands of people flooding the streets, completely out of control’.” Troyanovsky believed that Andropov feared to see such a scene in the USSR – and did all he could to prevent it.

3. Was a cautious diplomat 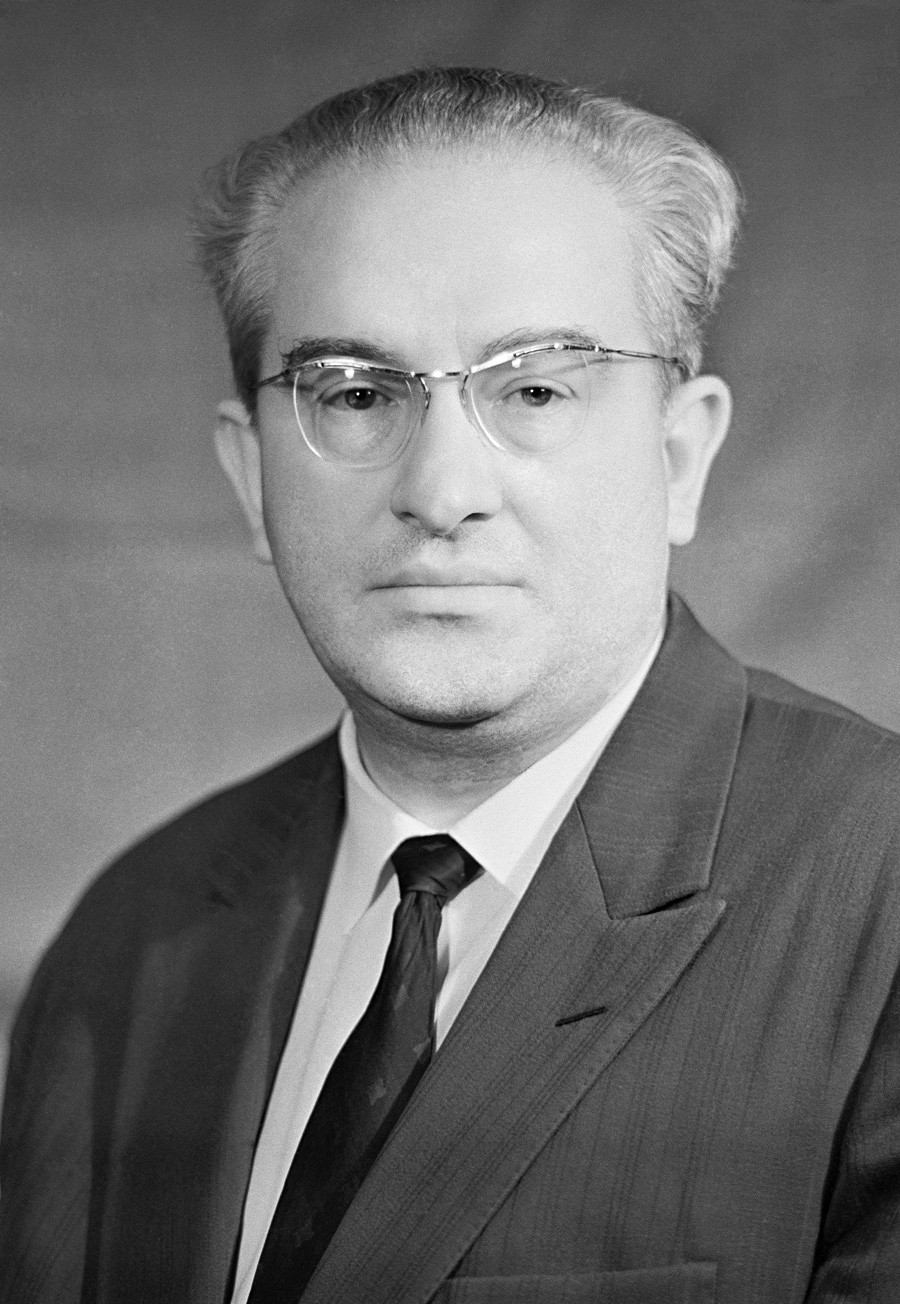 At the same time, Andropov could be flexible. During 1957-1967, he led the department on relations with the socialist parties within the Communist Party’s Central Committee – and his advisors, young intellectuals then, often remembered him as a ‘liberal’ leader. “In this room, we all can speak our minds, absolutely openly. But the second you leave it – play by the rules,” political scientist Georgy Arbatov remembered Andropov saying. That meant: we can criticize the Soviet system among ourselves, but remember to remain loyal to the country.

Several historians even go as far as stating that it was Andropov who developed the course on rapprochement with the West. “Andropov became an architect of Brezhnev’s Western policy [the détente of the 1970s, when the Soviet-Western relations slightly improved],” says German historian Susanne Schattenberg. Nevertheless, while a diplomat in foreign policy, Andropov was always strict at home.

4. Ruled the KGB with an iron fist 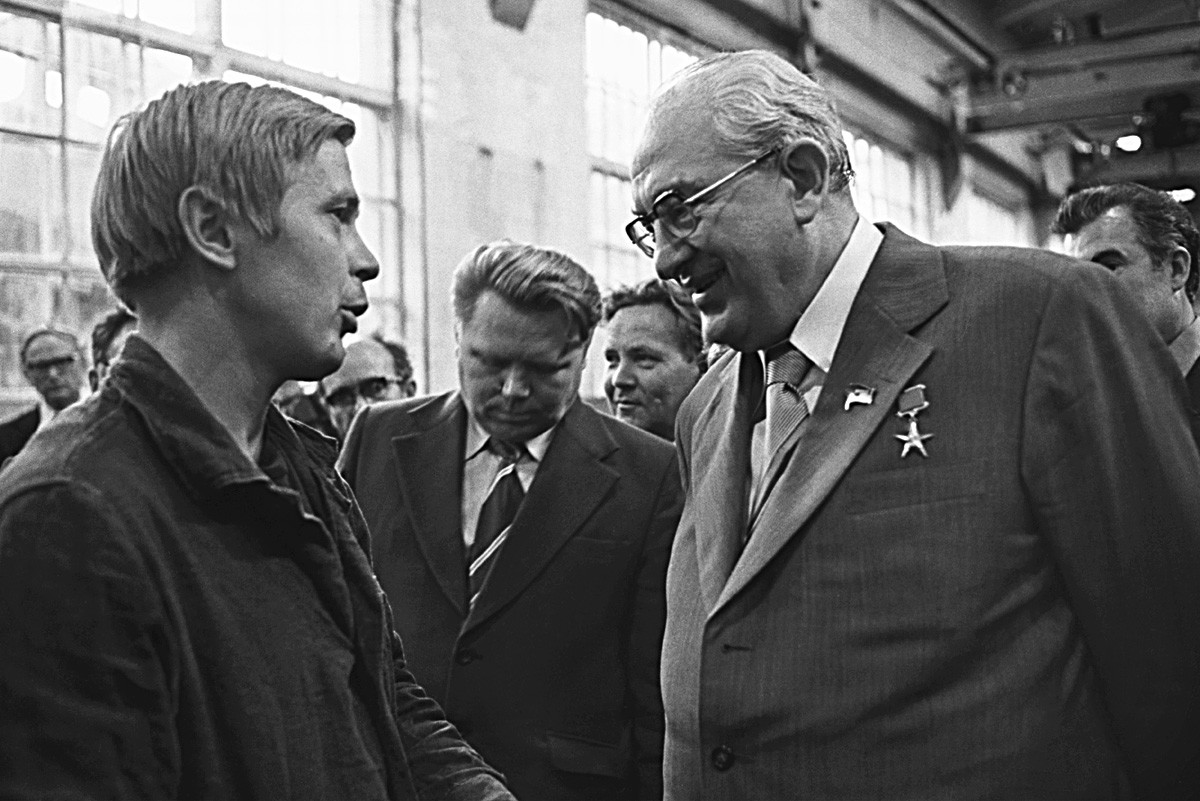 Yuri Andropov (R) the Chairman of the KGB, talks to a worker in the tractor plant.

During Leonid Brezhnev’s long reign (1964 – 1982), Andropov was among the most important figures for the regime, overseeing the KGB since 1967. He handled many issues, including international crises in the Middle East, Afghanistan and Czechoslovakia, regional conflicts in the USSR and suppressing dissident movement within the country. Dozens of dissidents were put in asylums under the pretext of their ‘mental illnesses’. Several hundred more were forced to leave the USSR.

“Andropov was never ashamed of his role in the struggle against dissidents,” wrote Medvedev. “Though he was a well-educated, intellectual man, he could not stand the idea of democratic opposition or public criticism towards the Communist party of the Soviet state. He considered the KGB to be necessary, a crucial organization for the USSR.” Such an approach, combined with high efficiency and professionalism, made Andropov indispensable for Brezhnev. 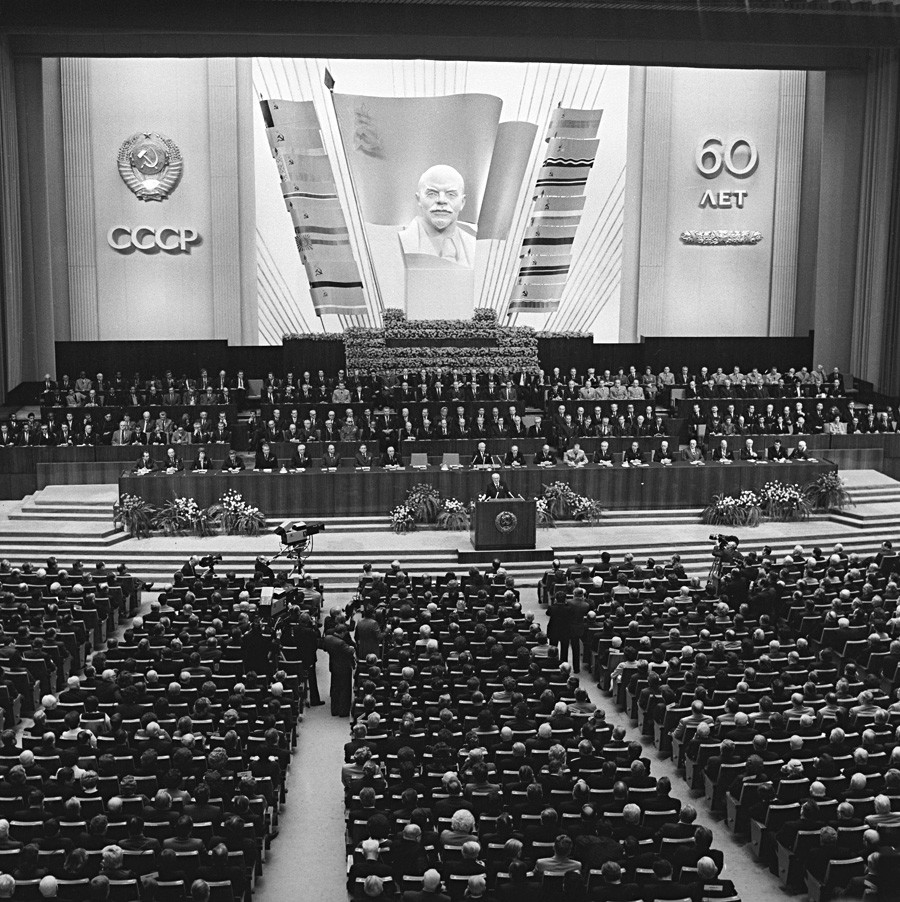 Yury Andropov, secretary general of the CPSU Central Committee, at a meeting of the Supreme Soviet, dedicated to the USSR's 60th anniversary.

That was one of the reasons Brezhnev chose Andropov to be his successor, appointing him to the second post in the country in 1982. Brezhnev died in the same year; Andropov was 68 but only managed to outlive his long-time boss by 15 months.

What did he achieve while in power? Andropov knew well that the Soviet economy was in trouble, destabilized by enormous military spending and tried to fix it. To do that, he started fighting corruption and ‘shadow economy’, that began to thrive in the late-Brezhnev era.

At the same time, Andropov was trying to improve the economic situation by hardening the discipline – police began detaining people for being in the streets during work hours, for being drunk and so on. While it definitely impressed the public, such measures were quite inefficient – politician Alexander Yakovlev, who would assist Mikhail Gorbachev during perestroika, said: “Andropov’s reforms were as effective as trying to make a train which runs out of fuel to go faster by polishing it.” Perhaps Andropov had some greater plans, but fate would have it that he never would have the time to implement them anyway.