How many Soviet citizens died in World War II? 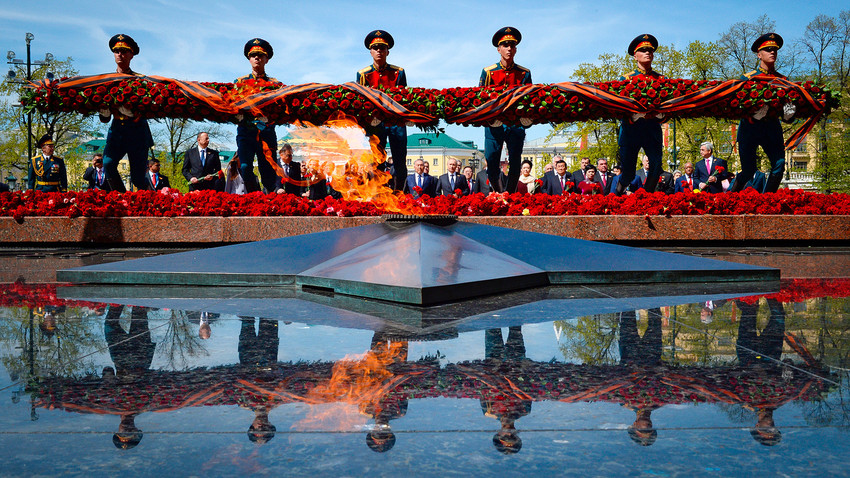 The Tomb of the Unknown Soldier memorial near Kremlin, dedicated to all Soviet soldiers who gave their lives protecting their country in 1941-1945.

Getty Images
It is clear that during the most horrendous war in the history of mankind, the USSR suffered greater losses than any other country – but the exact number of victims remains disputed.

In 1946, reacting to Winston Churchill’s Fulton speech that marked the start of the Cold War, Joseph Stalin mentioned the Great Patriotic War (how Russians refer to the war with Nazi Germany) and stated that “as a result of the German invasion, the Soviet Union irrevocably lost… around 7 million people.” That was the first ever official Soviet stance on war casualties. And it was fake news. 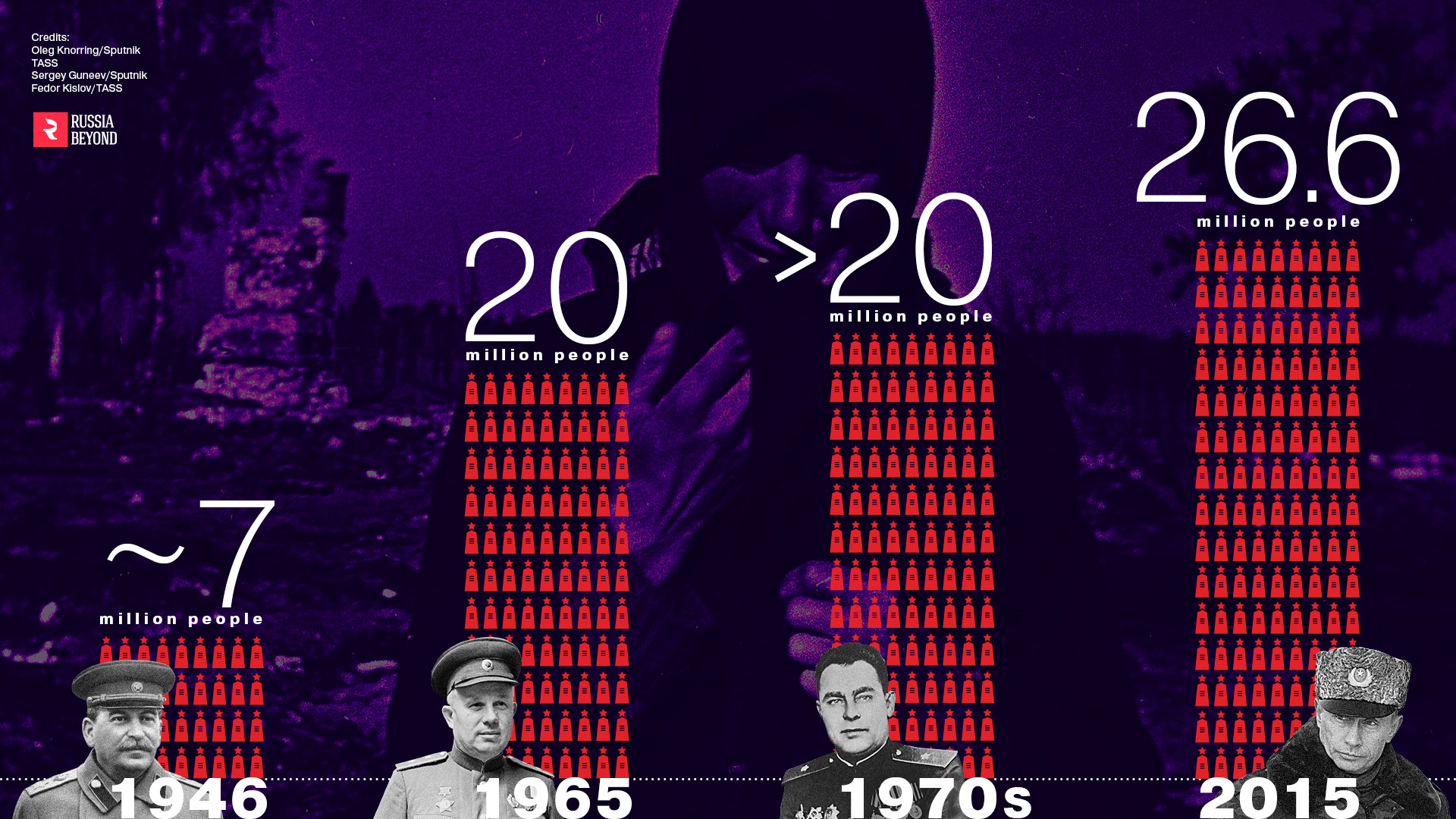 That's how the official estimate of the number of people the USSR lost to WWII changed from 1946 to 2015.

“In fact, Stalin had knowledge of the other statistical data: 15 million casualties. This number was contained in a report delivered to him in early 1946, by the commission led by The State Planning Committee’s president Nikolai Voznesensky,”Professor Viktor Zemskov of the Institute of Russian History notes. Zemskov supposes that Stalin was eager to hide the real scale of losses from both the Soviet citizens and the world – in order not to show the USSR as a state weakened by the war.

Nevertheless, the official 7-million estimate of casualties didn’t last long, as most Soviet people believed that number to be too low. In 1965, Nikita Khrushchev, who succeeded Stalin as USSR’s leader, mentioned a higher number: 20 million. Essentially, this is the number that became the official evaluation for the rest of the Soviet era – Leonid Brezhnev adhered to it too, but added “more than” to the 20 million casualties. 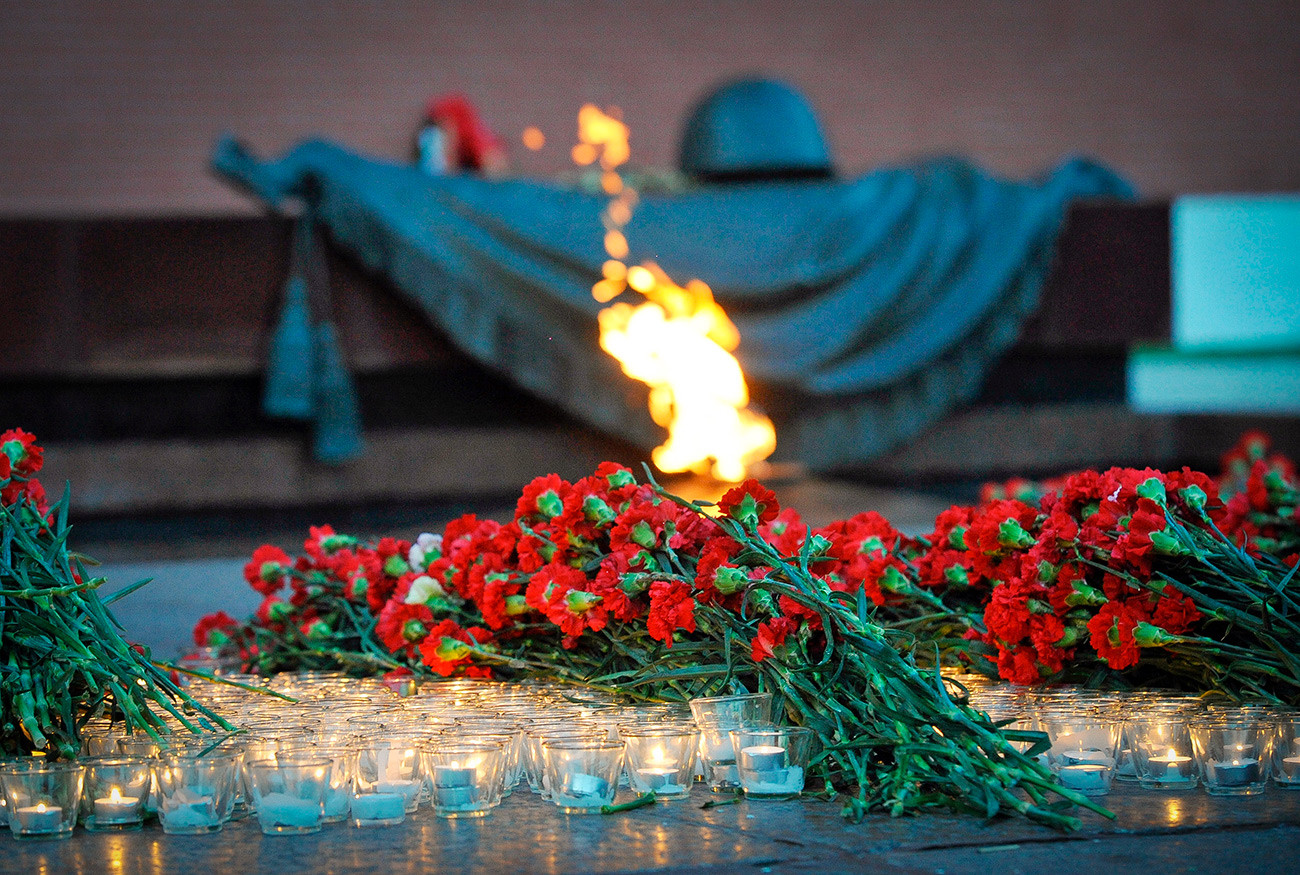 The Unknown Soldier memorial often is decorated with flowers.

Both Khrushchev and Brezhnev used the phrase “the war cost the country…” to lump everyone together, not separating those who died in the battlefield, victims of German occupation, those who starved to death, etc.

After the dissolution of the USSR, the estimate grew again. According to the latest statements that Russian authorities officially acknowledge, overall losses (both among soldiers and civilians) amounted to 26,6 million people. That’s the official evaluation of the losses today (in 2019) – at least, it’s the number Russian state officials mention on Victory day, commemorations and so on. 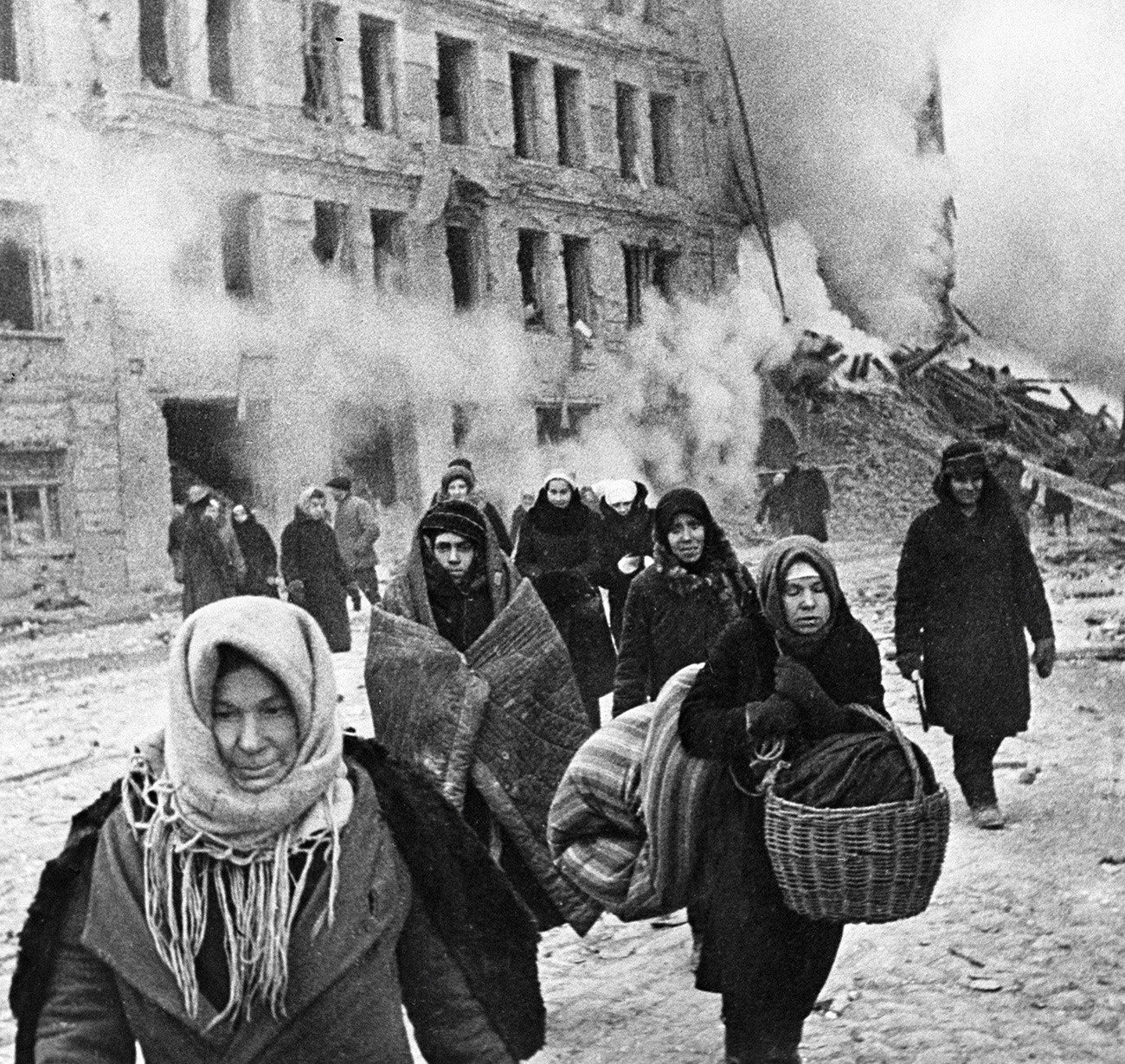 While dealing with those numbers, they didn’t take the whole World War II into account, but rather only the war between the USSR and Nazi Germany between 1941-1945, excluding the Soviet operations between 1939-1941 (the invasion of Poland and the Winter War with Finland) and the Soviet-Japanese war of 1945.

Another important nuance is that the official estimate, given by the Ministry of Defence in 2015, separates the number of losses (26,6 million people) into the two following categories:

- Around 12 million soldiers were killed in the battlefield, captured (not having returned) or gone missing.

- The rest (approximately 14,6 million people) were civilians who died in the occupation zones, were forcefully moved to Germany (and did not come back) or lost their lives to starvation, illnesses and so on. 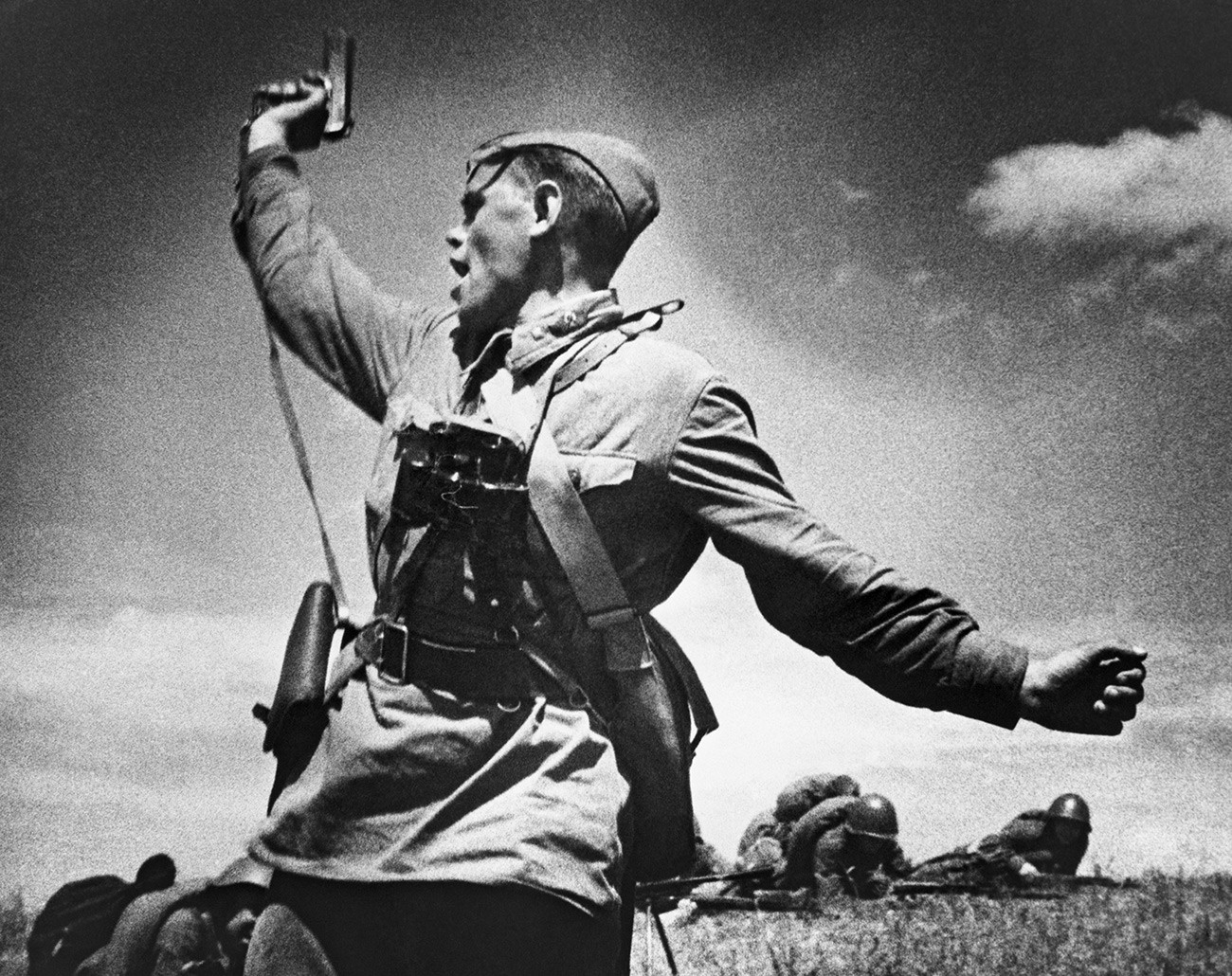 A Soviet officer raising his unit for an attack.

The 26,6 million estimate of losses clearly is official (as of now), but far from being the only one. Though the Great Patriotic War ended almost 75 years ago, the war of numbers still goes on, with different historians proposing different ways to measure the number of losses.

On the one hand, from time to time occurring versions suggest even bigger losses than the official estimate. For instance, in 2017, Nikolai Zemtsov, Deputy of the Russian State Duma, stated that “the USSR irrevocably lost almost 42 million people due to [the Great Patriotic] war factors.” That version, however, is very doubtful – Zemtsov included in that enormous number not only people who actually died, but children who were not born due to the war – which is incorrect, as professional demographers state. 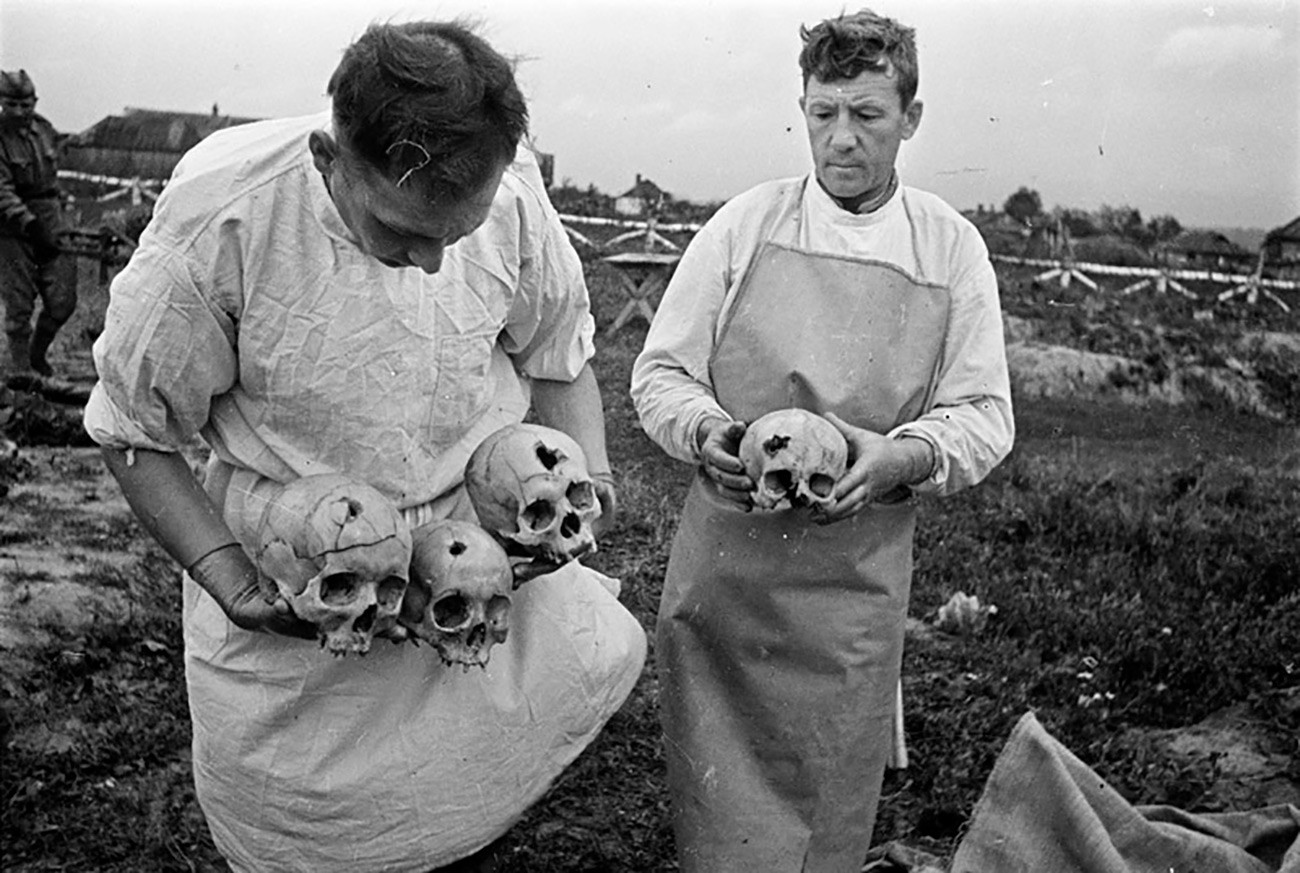 On the other hand, there are opinions that suggest 26,6 million is already an overestimation. In his 2015 article, Viktor Zemskov suggested that the estimation of war casualties (11,5 – 12 million) is correct, but the number of civilian losses due to war factors includes too many people: “Such statistics include the increased mortality in the Soviet home front because of malnutrition, overburdening work and so on… I disagree with such an approach.”

According to Zemskov, it is too hard to distinguish between deaths caused by war and natural reasons in this case – so to be more precise, historians should have only included in the number of civilian deaths caused by war, i.e. those killed directly by Germans, by bombardments, those who died during the Siege of Leningrad – that amounts to 4,5 million victims. Combined with actual war casualties, that gives us 16 million people. Nevertheless, official statistics embrace a larger number of people.

While the argument on the evaluation methods can go on forever, one thing is undeniable: during the Great Patriotic War, the USSR lost a great number of people – strong and passionate men and women in their prime – but it saved the world from German Nazism. The price of victory was terrible, but the price of defeat would have been unthinkable.