Black hole of the 1990s: The lawless market where people could buy guns and go into hiding (PHOTOS)

History
Yekaterina Sinelschikova
AFP
The Cherkizovsky Market once dressed half of Russia. It was also a place filled with brothels and arms dealers, where dog meat was served as food and criminal bosses congregated. When it was finally shut down, the proceedings were even broadcast on live TV in China.

Try to imagine: There was once a huge market on the outskirts of Moscow where dozens of diasporas lived by their own laws, where smuggled goods flowed freely, where people disappeared, and where one could illegally purchase weapons and drugs.

The Cherkizovsky Market became a symbol of the 1990s as a Wild West of trade. People who didn’t know about it and had never been there found it hard to believe that such a place could exist at all—what’s more legally and for so many years. Once the largest marketplace in Eastern Europe, it made millions of dollars until it was shut down ten years ago. 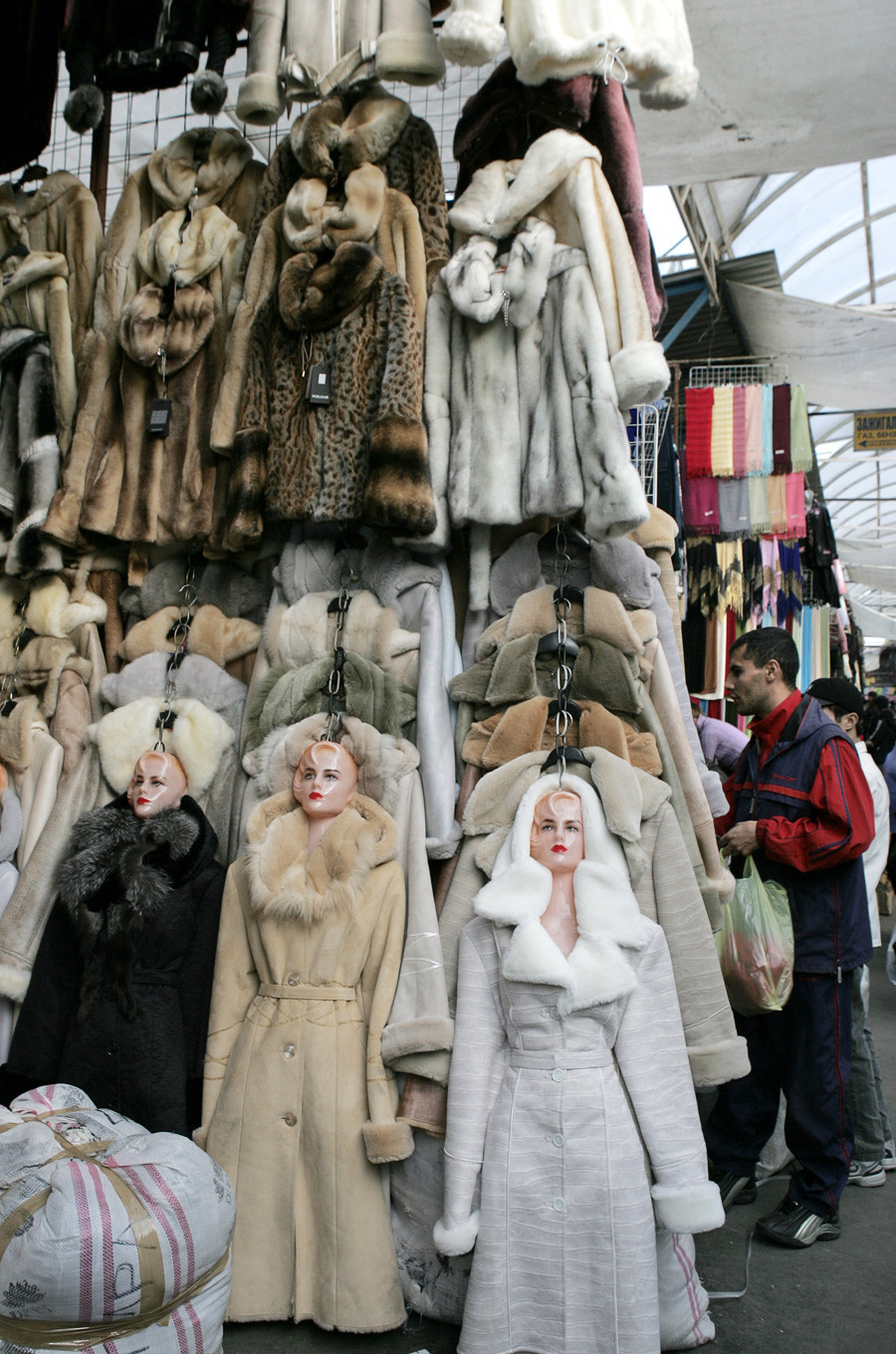 The market was established in the early 1990s on the site of a vast wasteland between the Schelkovsky and Izmaylovsky motorways in an eastern part of Moscow. Part of the territory of this trading Babylon belonged to the State University of Physical Culture. Market stalls came to occupy more and more space. By 2009, when the market was finally closed, its area had reached 72 hectares (around one and a half times the size of the Vatican). 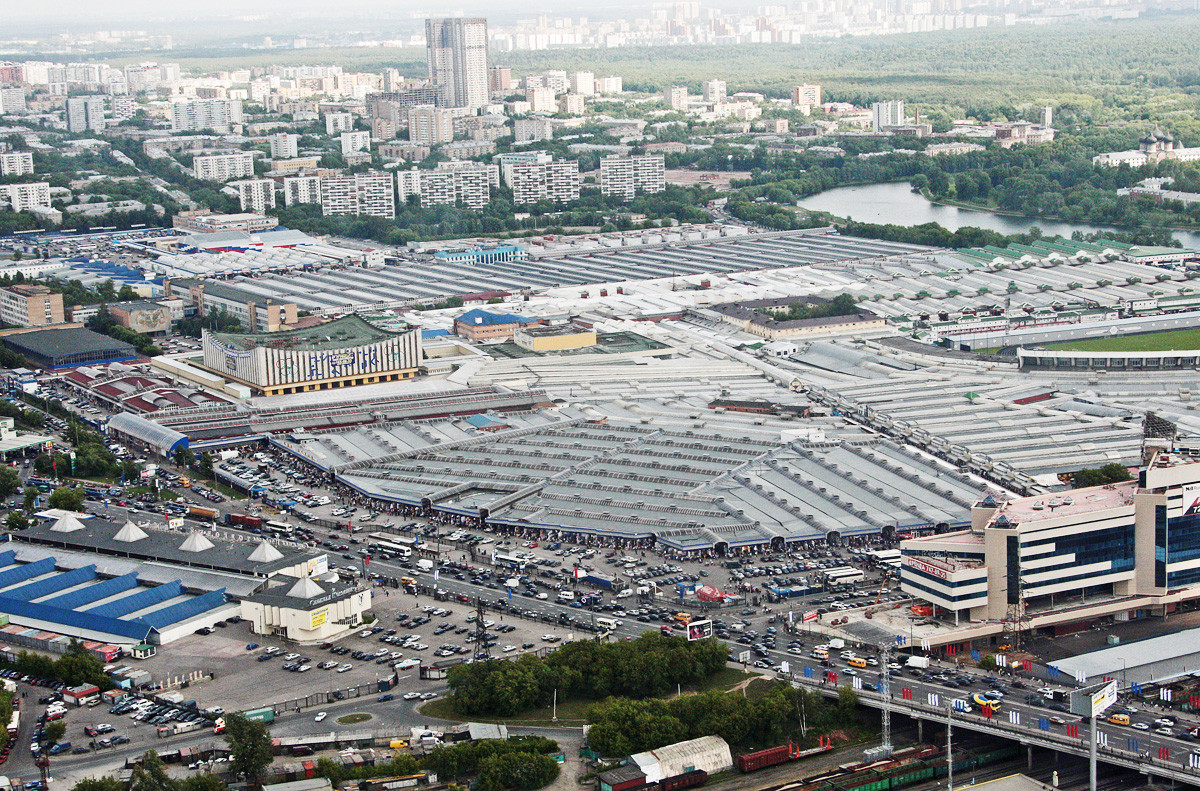 It was a place where one could buy and sell everything under the sun: clothes of all sizes, fur, leather, shoes, toys, electronics and food from all over the world. People from throughout Russia came to Cherkizovsky Market to make wholesale purchases, sell goods from their own cities, buy things at cheaper prices or to sell their own goods at ten times the original price. 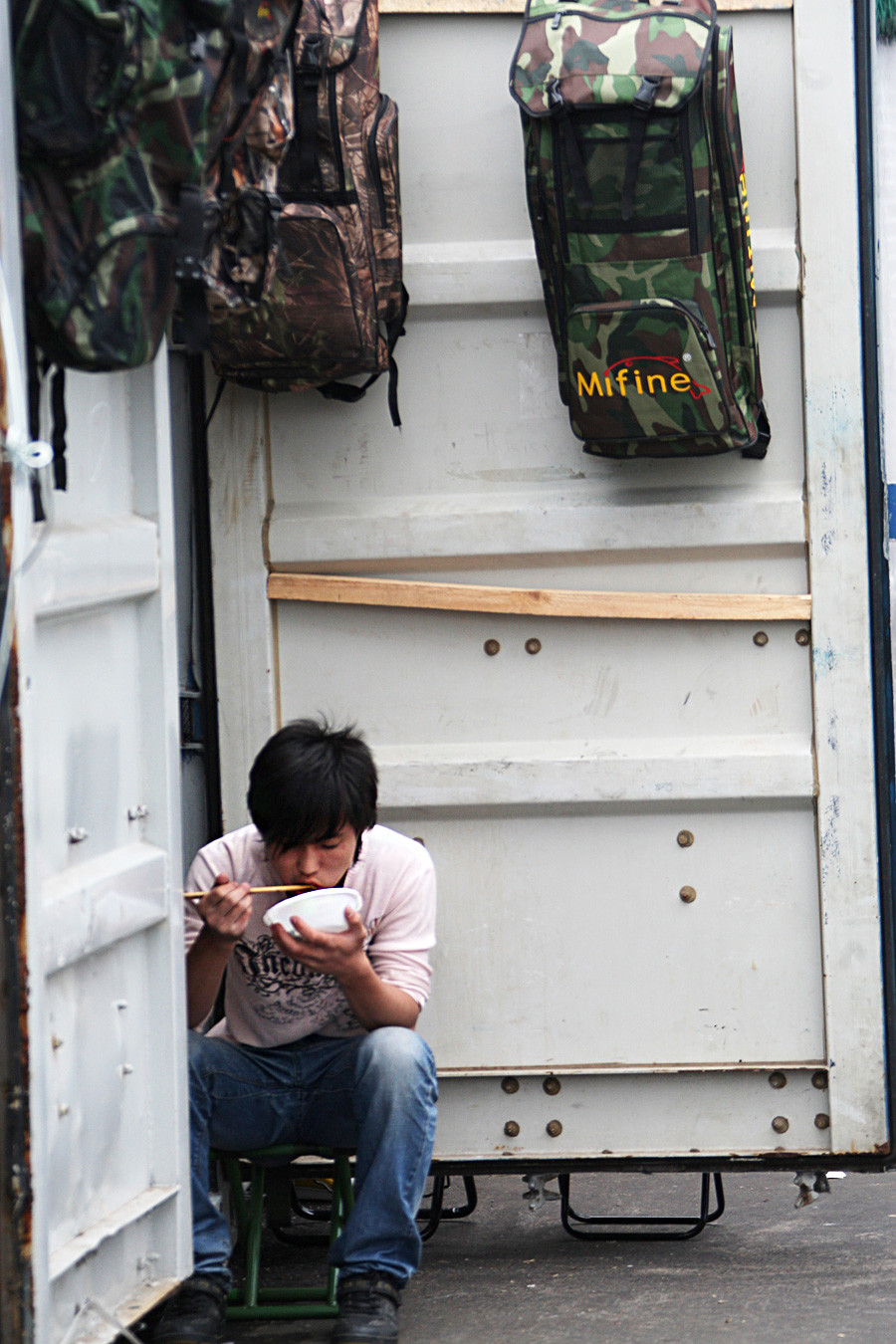 It was also a haven for counterfeit goods, and any more or less high-quality item could be copied and reproduced here. For example, there was a Vietnamese tailor's shop where you could bring a sample and have it reproduced using cheaper fabrics. Colloquially, "items from Cherkizon" became synonymous with "counterfeit," while the name Cherkizovsky itself became associated with a lawless place where hungry migrant workers eat dog. 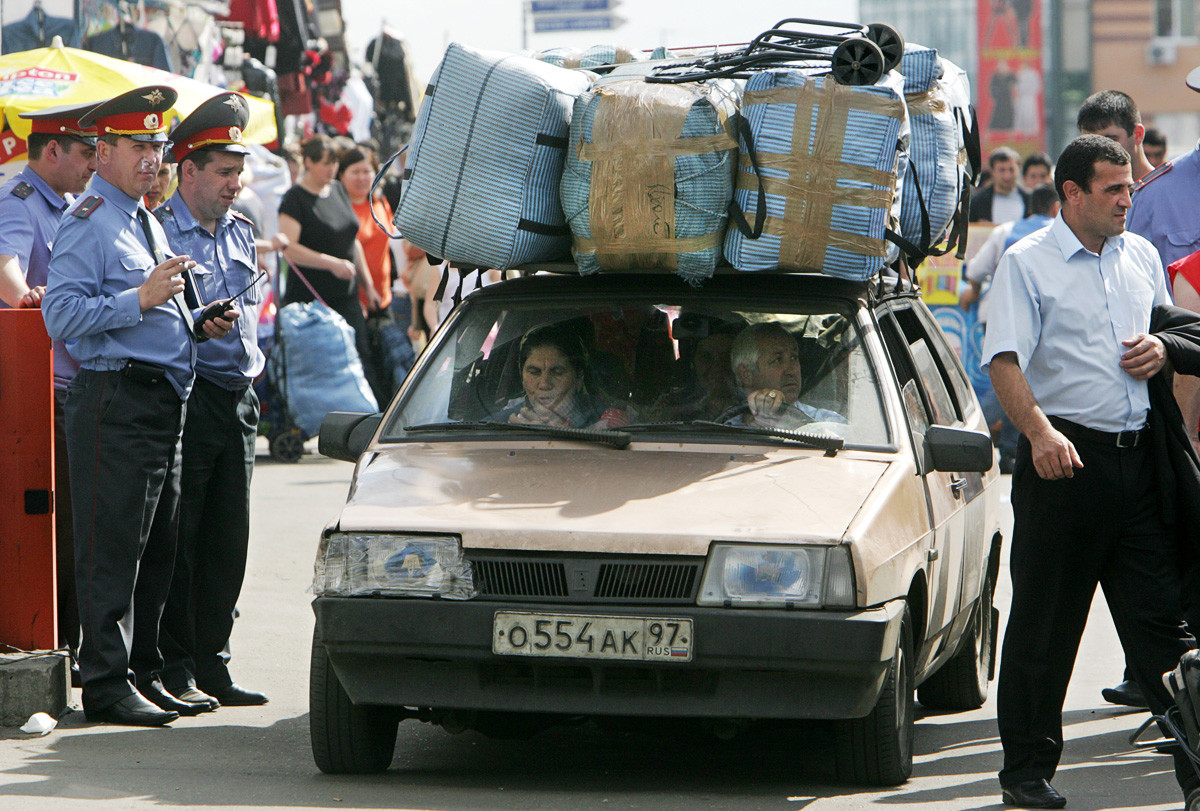 "That place was considered a kind of a black hole,” recalls Ilya Daniltsev, a graduate of the university on whose territory the market was located. “Entering it was like walking into a dense forest where the sunlight could barely penetrate through rows of clothes." The site quickly became a refuge for migrants, many of whom were staying in the country illegally. "You could walk there for half a day and not hear a word of Russian. Even policemen preferred not to go there alone," Daniltsev says. 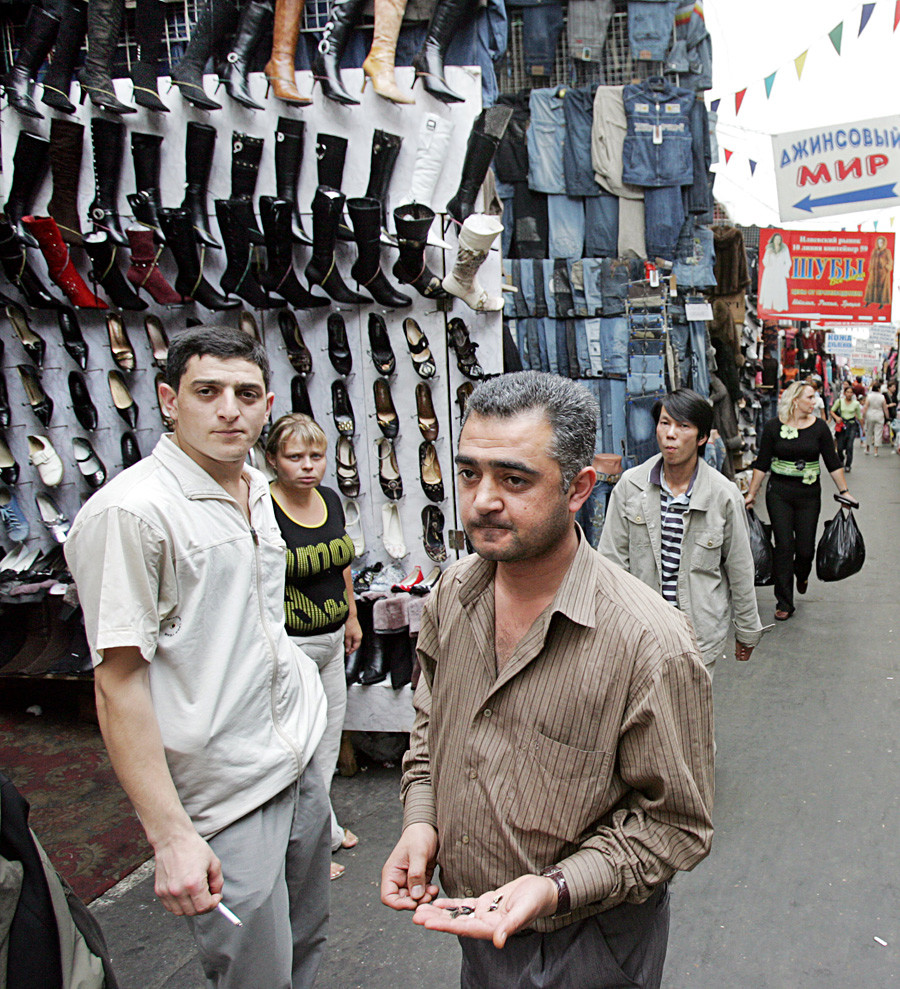 Weapons, counterfeit money and drugs were sometimes smuggled in bales of clothes. One thing that made the market unique was the flow of goods from abroad, a place where items from China, Turkey, Romania, Spain and so on all converged. The different diasporas divided up many parts of the market into makeshift neighborhoods: Azeri, Armenian, Chinese, Vietnamese, etc. Naturally, the relevant "infrastructure" followed shortly thereafter. 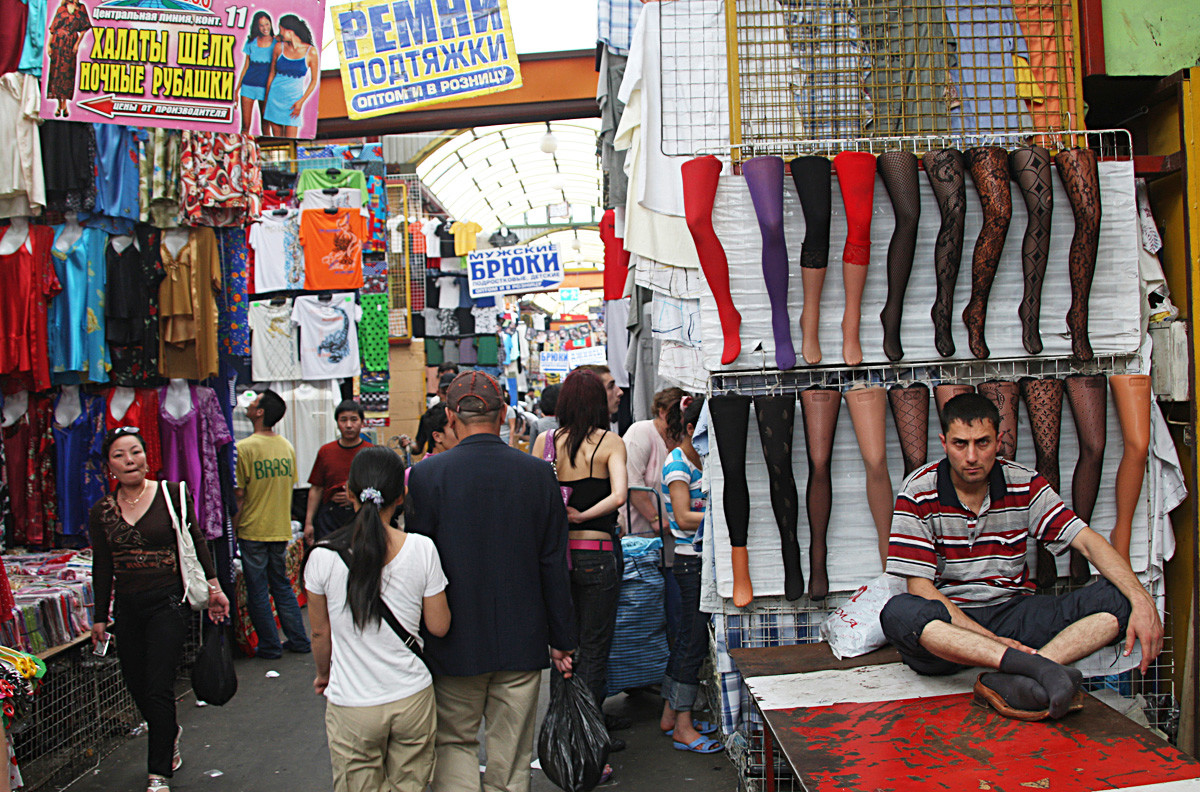 There were hotels, ethnic restaurants, a synagogue, medical services (e.g. general practitioners and gynecologists) operating on the market’s territory. There were places selling foreign newspapers, a casino, even leech therapy and traditional Chinese massage parlors. The market was so densely populated that in 2008 Tajikistan opened an official consulate there. There were also reports of dens and brothels set up in the basements at Cherkizovsky. "What that place was really full of were smuggled goods and people, who were in Moscow illegally," says Sergey Molokhov, a former officer at the Department for Combating Crime. 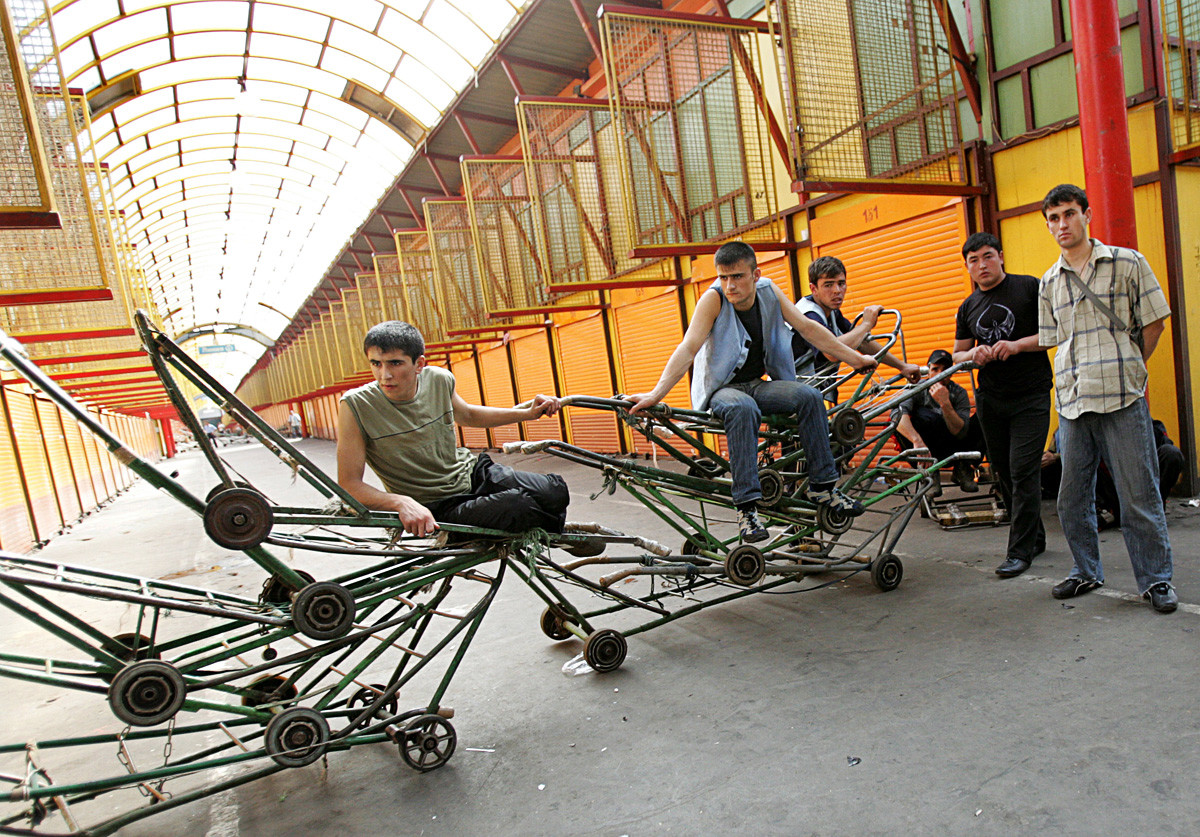 Migrants came to Cherkizovsky on purpose and to stay. They lived at the market and tried not to leave its boundaries for fear of having their documents checked by the police. At the market itself, document checks were rare since the territory was guarded by a private company hired by the owners. If they were lucky, migrants could rent a place in the basement, while the poorest of them slept in bathroom stalls. 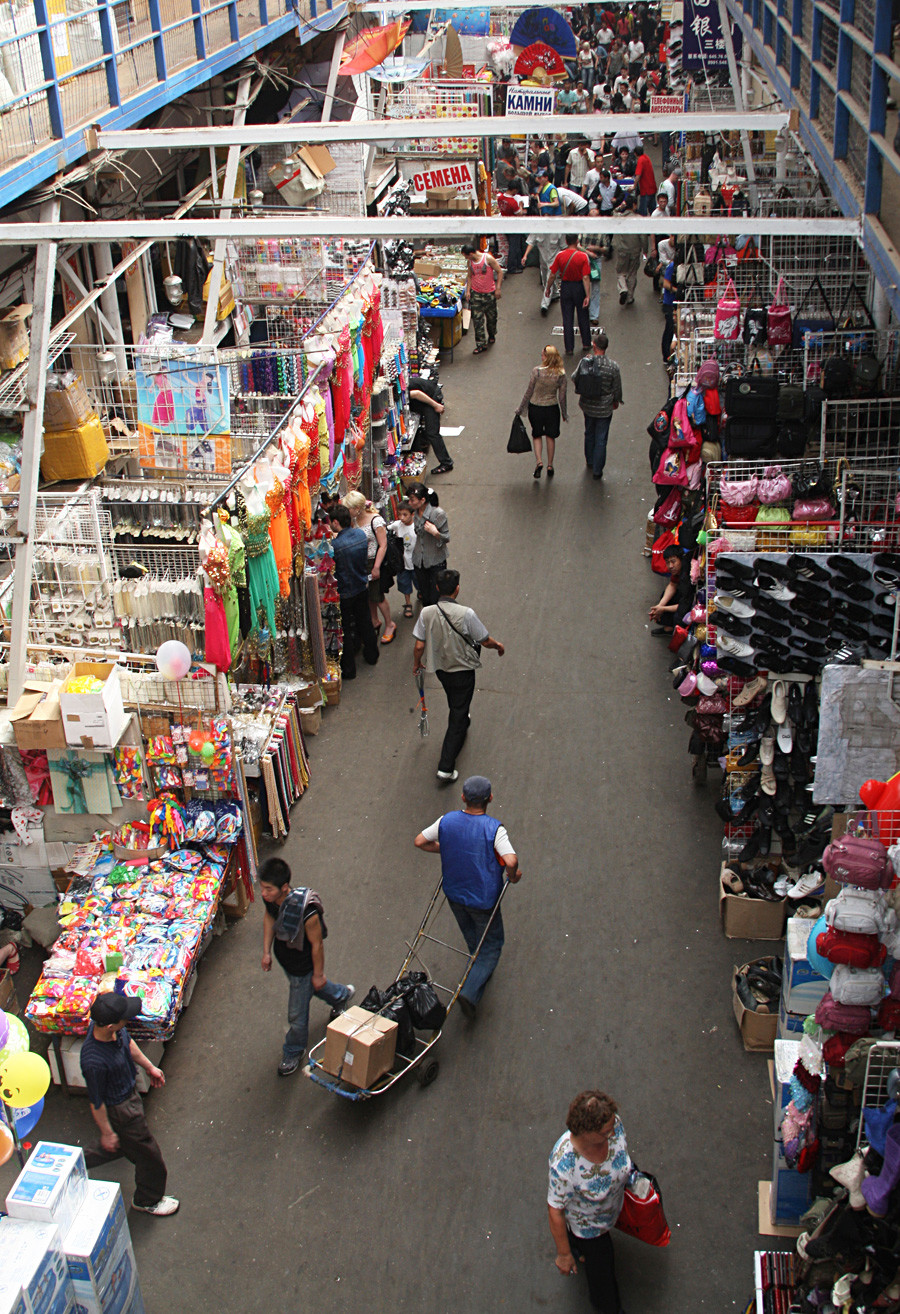 "In the late 1990s, the Cherkizovsky Market presented an awful sight. It consisted of covered wagons and containers,” recalls Olga Kosets, who used to sell goods at the market. “For 11 years, I virtually lived in a container, like a dog tied to a booth. The conditions were not great." Despite all this, many of Cherkizovsky’s inhabitants believed it was worth it. 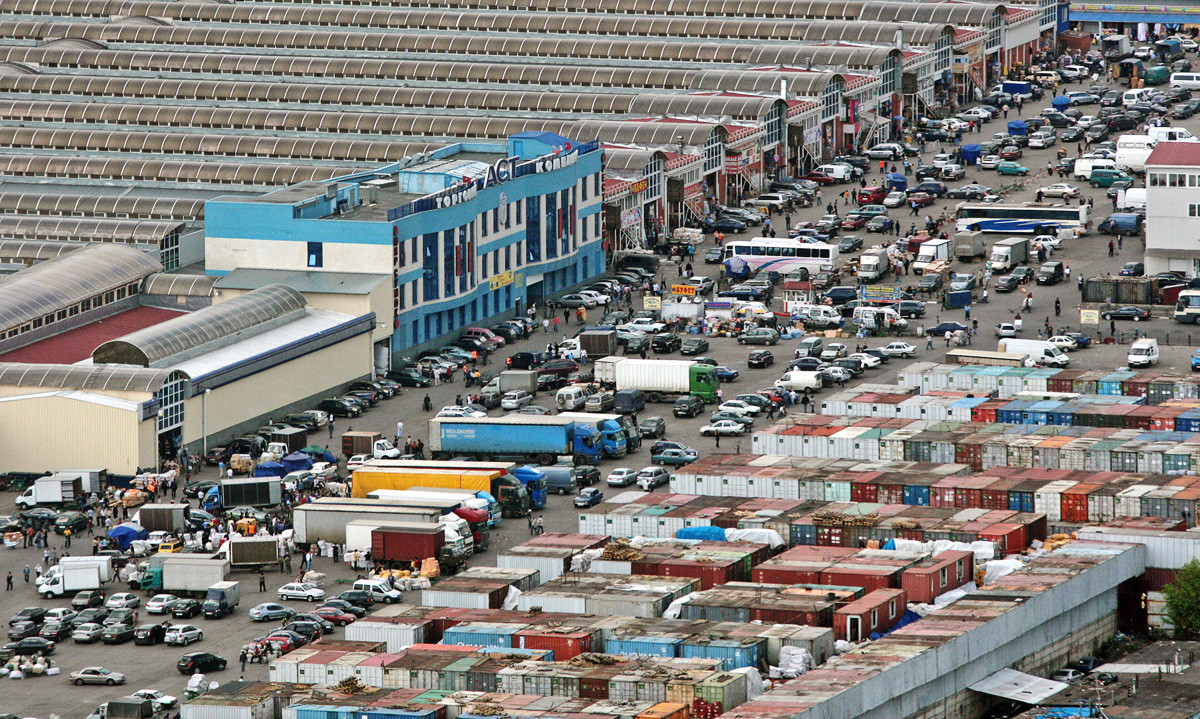 According to MACON Realty Group, there were more than 100,000 retail outlets and stalls on the site. Most were little more than small, cramped cubbyholes. At the same time, the rent was US$ 50,000 a month per stall. It was said that a stall could generate US$ 250,000 in sales every month, which might be true since few spaces at the market were ever vacant. 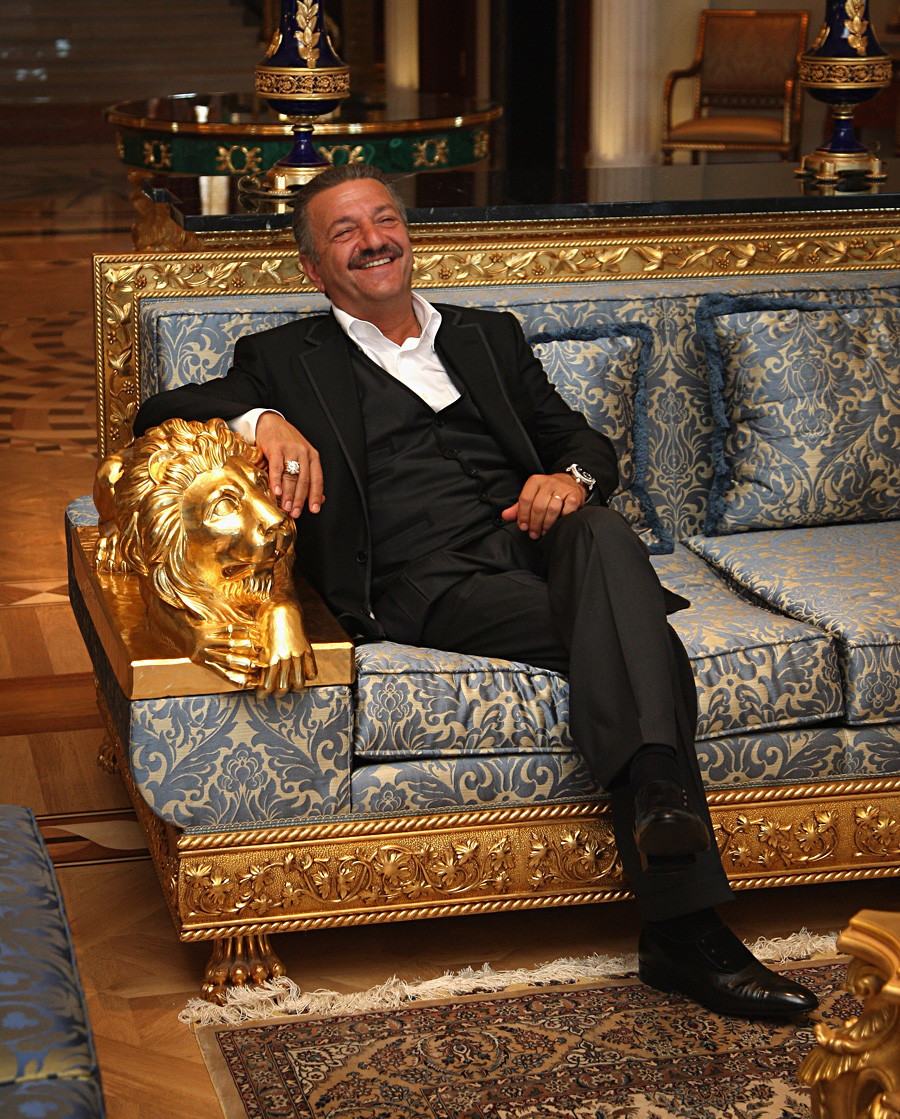 In 2006, Forbes estimated that the market's main beneficiary, Telman Ismailov, was worth $620 million. James Brown, Jennifer Lopez and other stars performed at his 50th birthday party, and Moscow’s mayor at the time, Yuri Luzhkov, made the first toast. 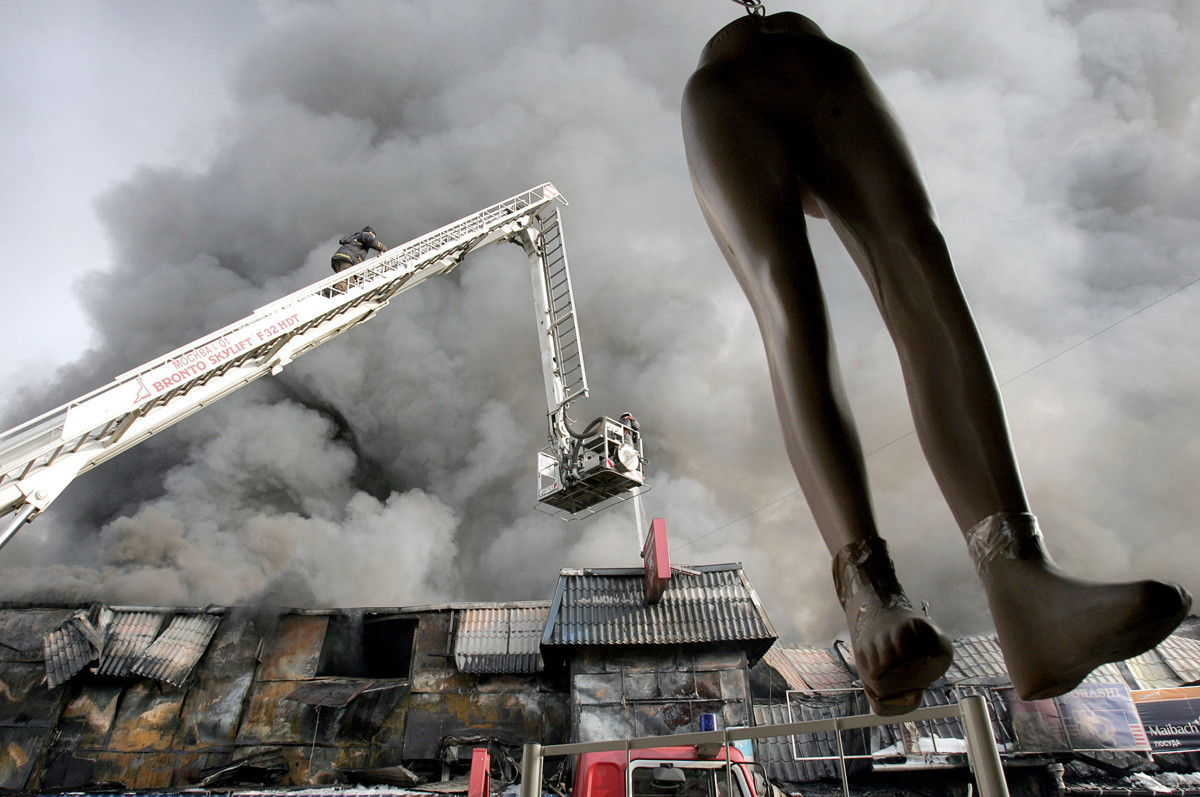 The empire first began to crumble in 2006, when a fire destroyed more than 500 square meters of the market and then, later the same year, right-wing radicals set off an improvised bomb at the market. The attack claimed the lives of 14 people, including two children. These incidents attracted the attention of the authorities. A proposal to close the market came from Rospotrebnadzor, the state consumer rights watchdog, which cited multiple violations of sanitary and fire safety regulations. 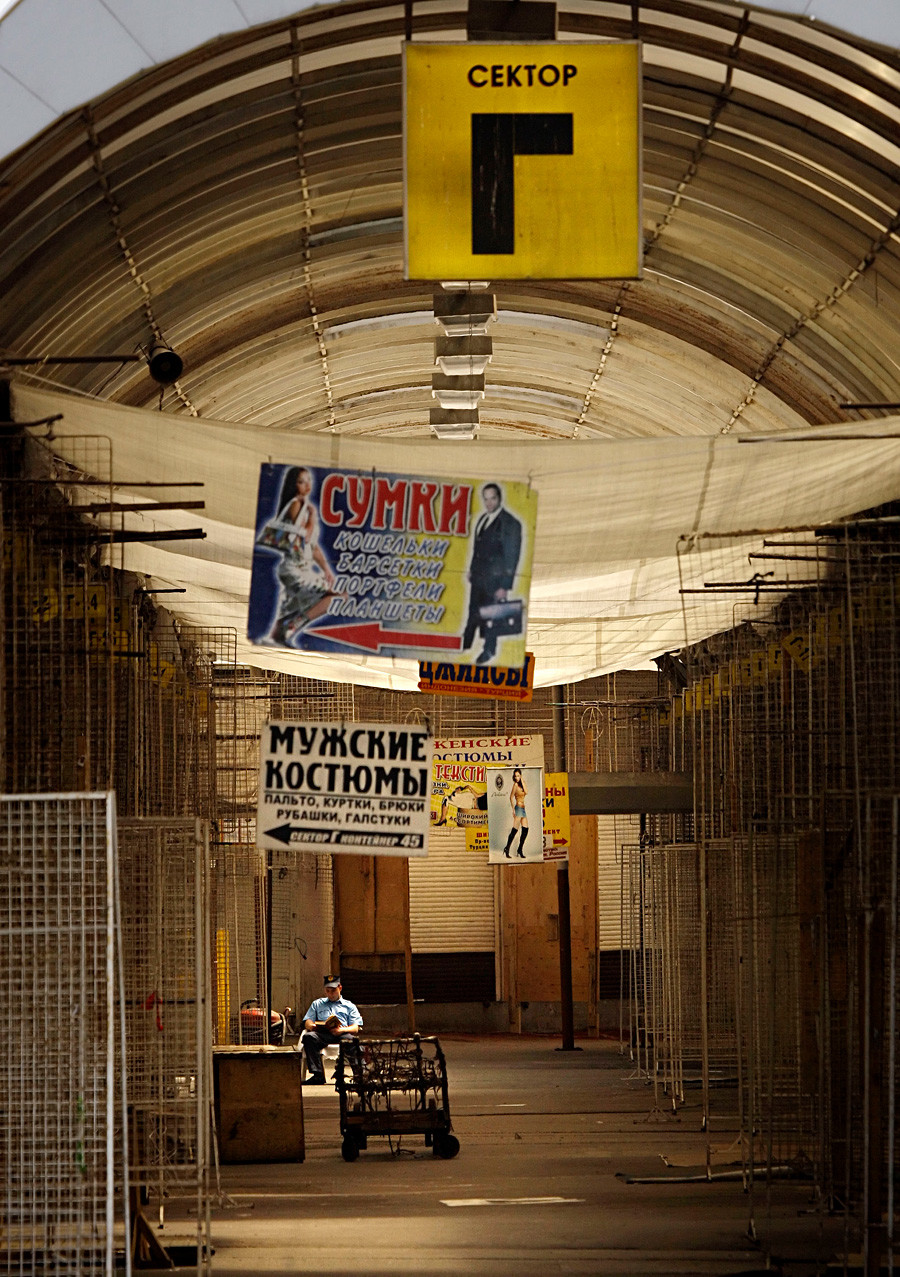 The Investigations Committee soon declared that it would seek the closure of this "hellhole," and Yuri Luzhkov immediately promised to do so as soon as possible. It all ended on June 29, 2009. The market’s former owner, Telman Ismailov, was arrested in absentia on charges of organizing two murders and arms trafficking. He was placed on the international wanted list but remains in hiding in Montenegro. 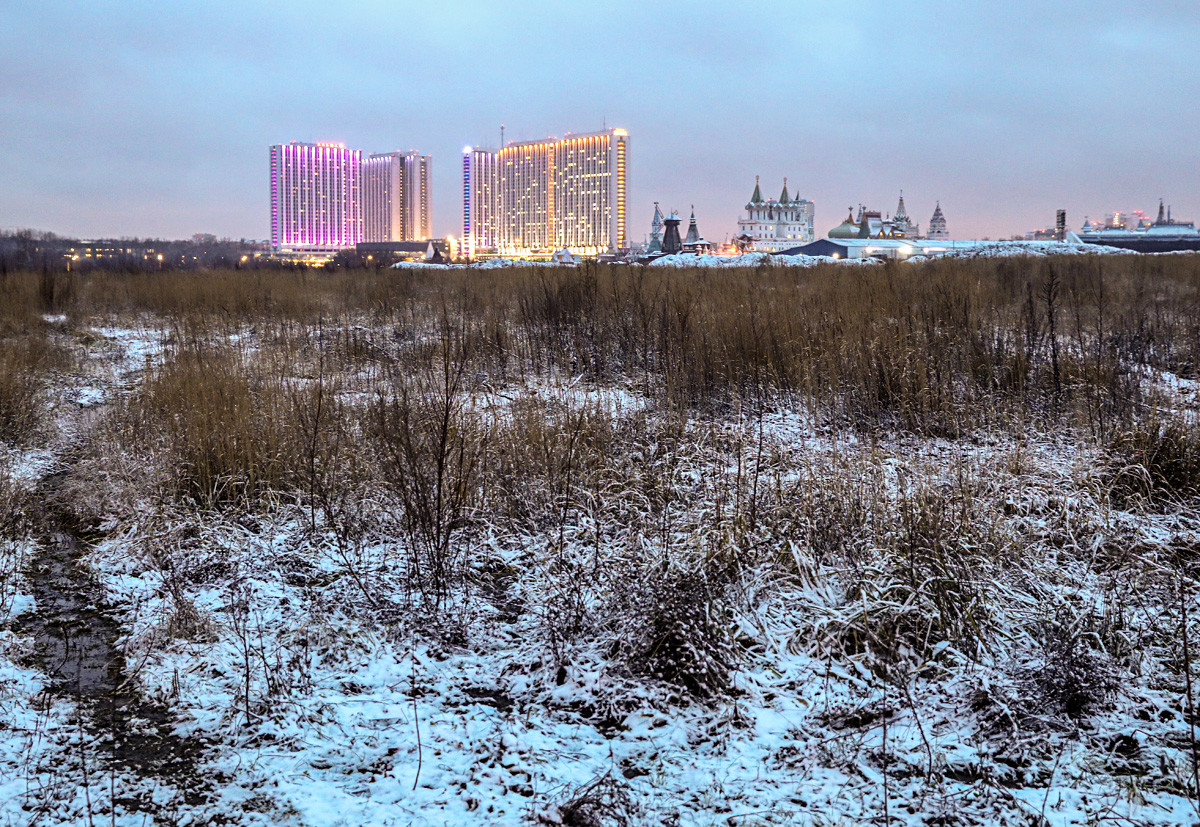 In the ten years that have passed since Cherkizovsky Market’s closure nothing has been built on its site. At first, IKEA showed interest in acquiring it, but nothing came of that and in 2018 the site was allocated for the construction of new housing.