Imprisoned with the Romanovs: The story of a very unlucky French tutor

History
Oleg Yegorov
Alexei Danichev/Sputnik; Archive photo
How extreme can the career of a French teacher be? The fate of Pierre Gilliard is a point in case, especially when you a royal family hires you.

Leaving Russia in 1920, on the deck of an American ship sailing from Vladivostok, Pierre Gilliard, a Swiss citizen who used to tutor the Romanov children, Prince Alexey and four Grand Duchesses, felt grim. “I keep a memory of the horrible events that I witnessed, deep in my soul. I saw one of the greatest empires in the world falling, side by side with its monarchs,” he wrote in his diary.

Such a melancholy note comes as no surprise, as Gilliard had spent the previous three years in Siberia – first together with his royal pupils, then separated from them. He knew well that all of them were dead, shot by the Bolsheviks. The fact he remained alive was a miracle.

The Swiss at court 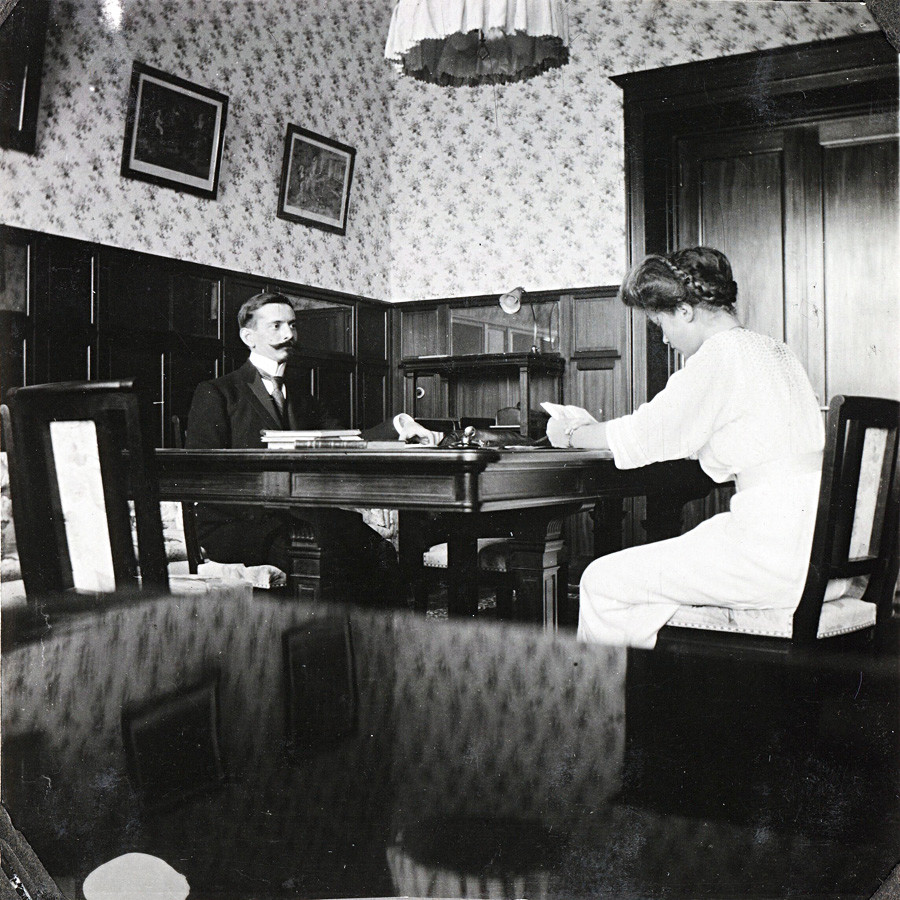 Sixteen years earlier, in 1904, Gilliard’s Russian adventures started off on a much more positive note. Originally invited to teach French in the family of Duke George of Leuchtenberg, the Romanovs’ cousin, the Gilliard soon switched to the royal family: Nicholas II and Empress Alexandra’s elder daughters, Olga and Tatiana, needed a tutor.

Inviting Swiss as French teachers was quite a common practice in imperial Russia, writes Anna Matveyeva for SWI Swissinfo: “Mostly, emigres from Switzerland were Protestants, and back then, Russians preferred them to Catholics.” In total, there were around 6,000 Swiss living in Russia, Matveyeva notes. 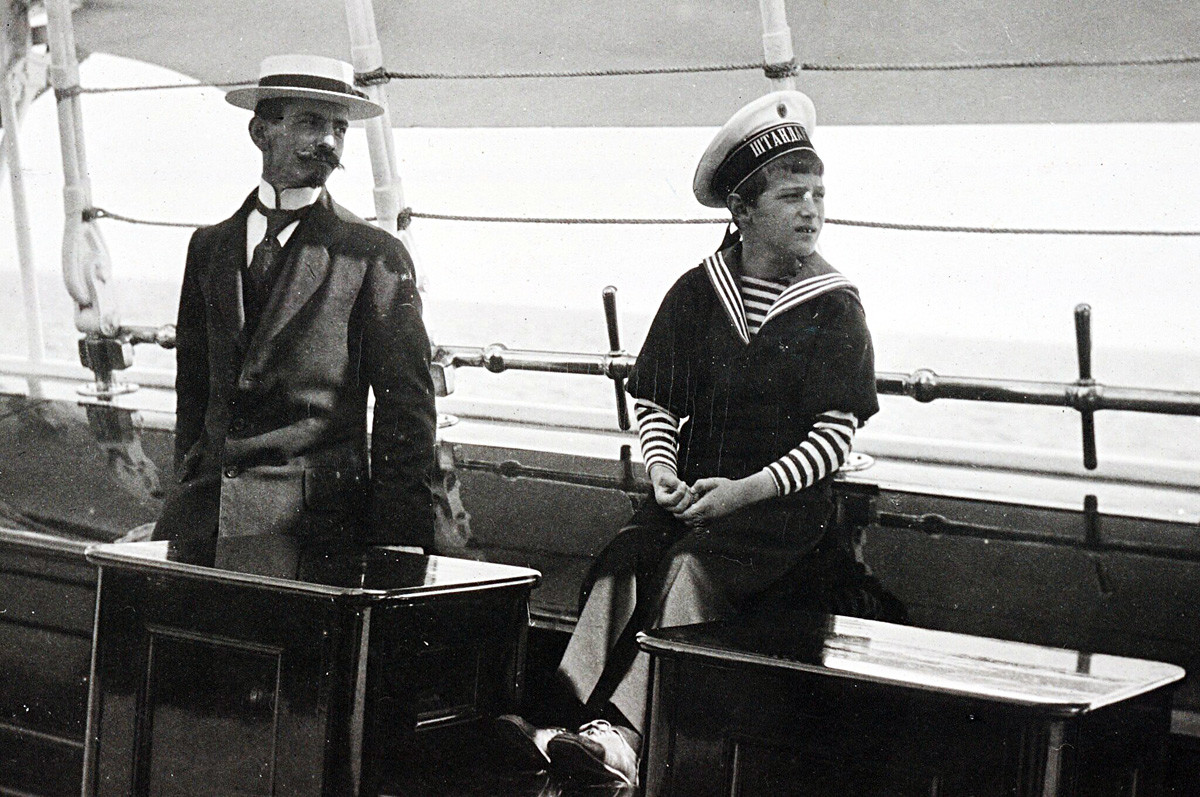 From 1909, Gilliard worked with the Romanovs on a daily basis: he lived in St. Petersburg, visiting Tsarskoye Selo (the royal residence nearby) five times a week. Soon he became a tutor for all four daughters of Nicholas and Alexandra, struggling to make their French fluent. The job wasn’t easy, as he noted in his memoirs.

“My pupils were slow to succeed – the royal family used to take trips to Crimea for several months… I regret that they didn’t have a French governess [to speak French], so each time they forgot a lot [without my lessons],” he complained. Nevertheless, he mentioned that all Grand Duchesses were smart and polite girls, always ready to learn. 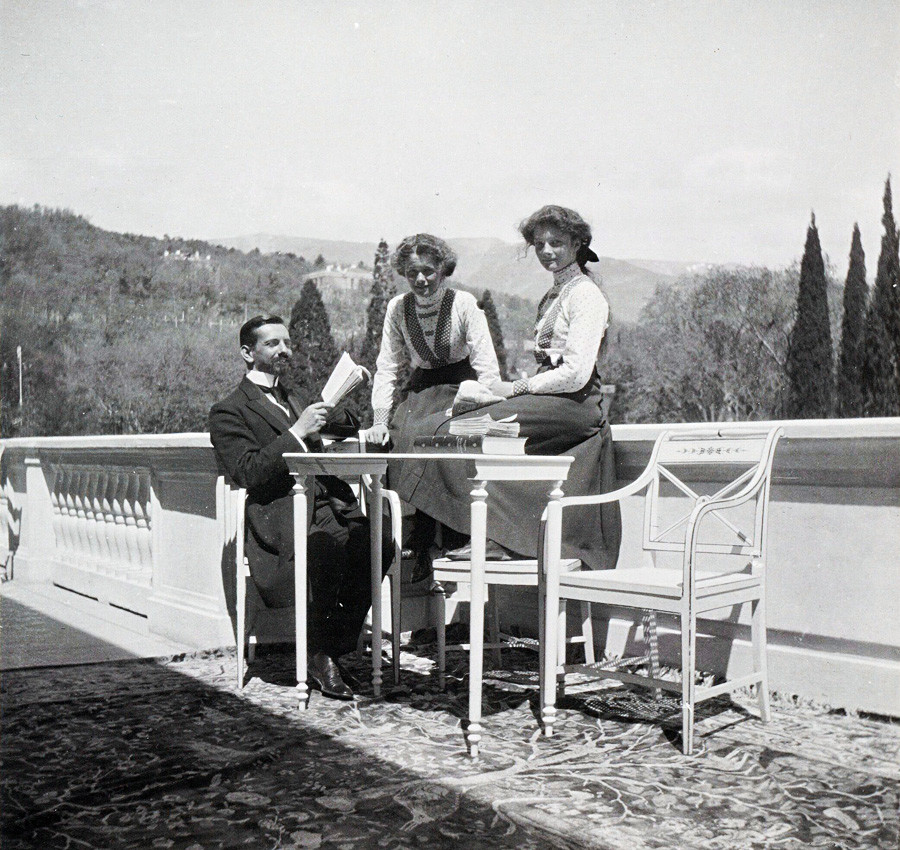 Gilliard with Olga and Tatiana at the Livadia Palace in 1911.

Perhaps the funniest incident he mentions in his memoirs was that when he and Olga, the eldest daughter, were reading Les Misérables, she came across the word “merde” (French for “shit”) and asked him what it meant. Gilliard flushed – of course, it was inappropriate to translate it to a young noblewoman. So she had to go to her father, Nicholas II, and he told her it was “a very strong word one should not repeat.” 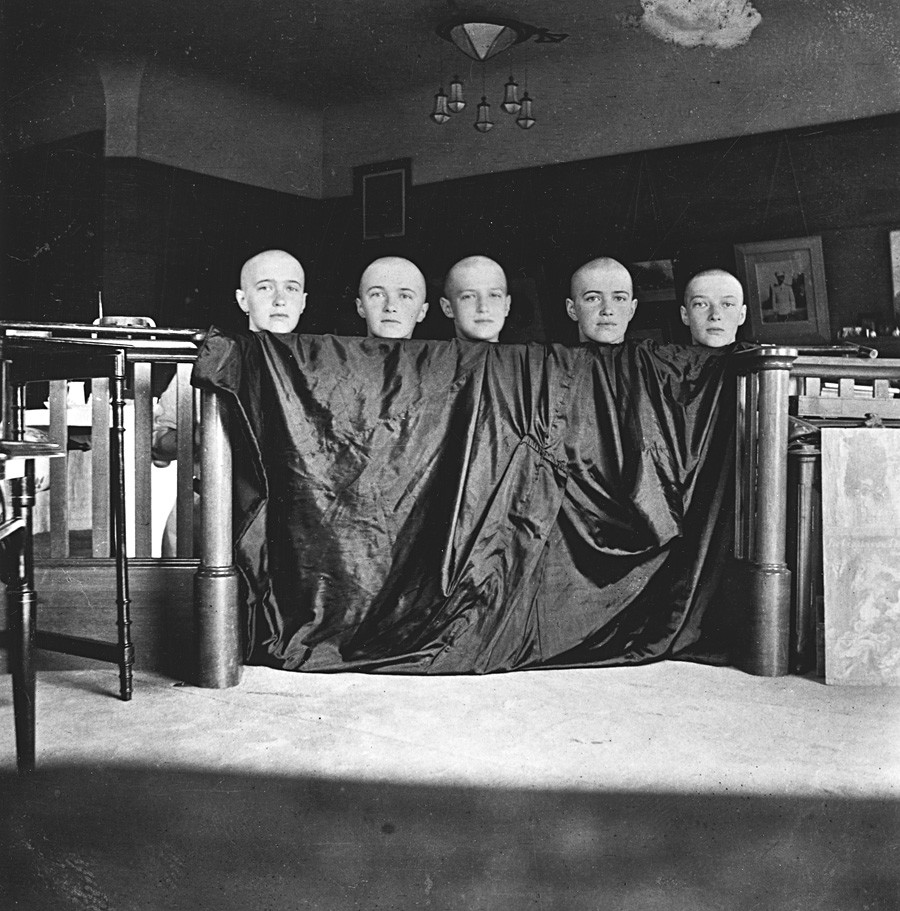 A photo of royal children with their heads shaved, during the measles epidemic, made by Gilliard. Empress Alexandra didn't like the photo, considering 'bodiless' heads a bad omen.

Gradually Gilliard became more than just a teacher – he befriended the Romanovs so much the Empress trusted him with tutoring Prince Alexei, the precious heir to the throne who suffered from the genetic disease of hemophilia. “With no doubt, this disease… resulted in the tragic solitude of the royal family, buried into their private life and the unbearable concern they had to hide from everyone,” recalled the tutor. Historians agree with him: overburdened with their son’s illness, Nicholas and Alexandra were losing control of the country.

Nevertheless, Gilliard adored Alexei, as well as the rest of the family: “When he could, he enjoyed life, as a joyful boy. He never boasted of being a royal heir, it was the last thing he thought of… Alexei was the center of the family, all hopes and love concentrated on him.”

The Swiss tutor was the one to inform Alexei that his father had abdicated in March 1917. The boy, as Gilliard mentioned, asked “Who is going to rule Russia now?” but worried not about himself, only about his family. 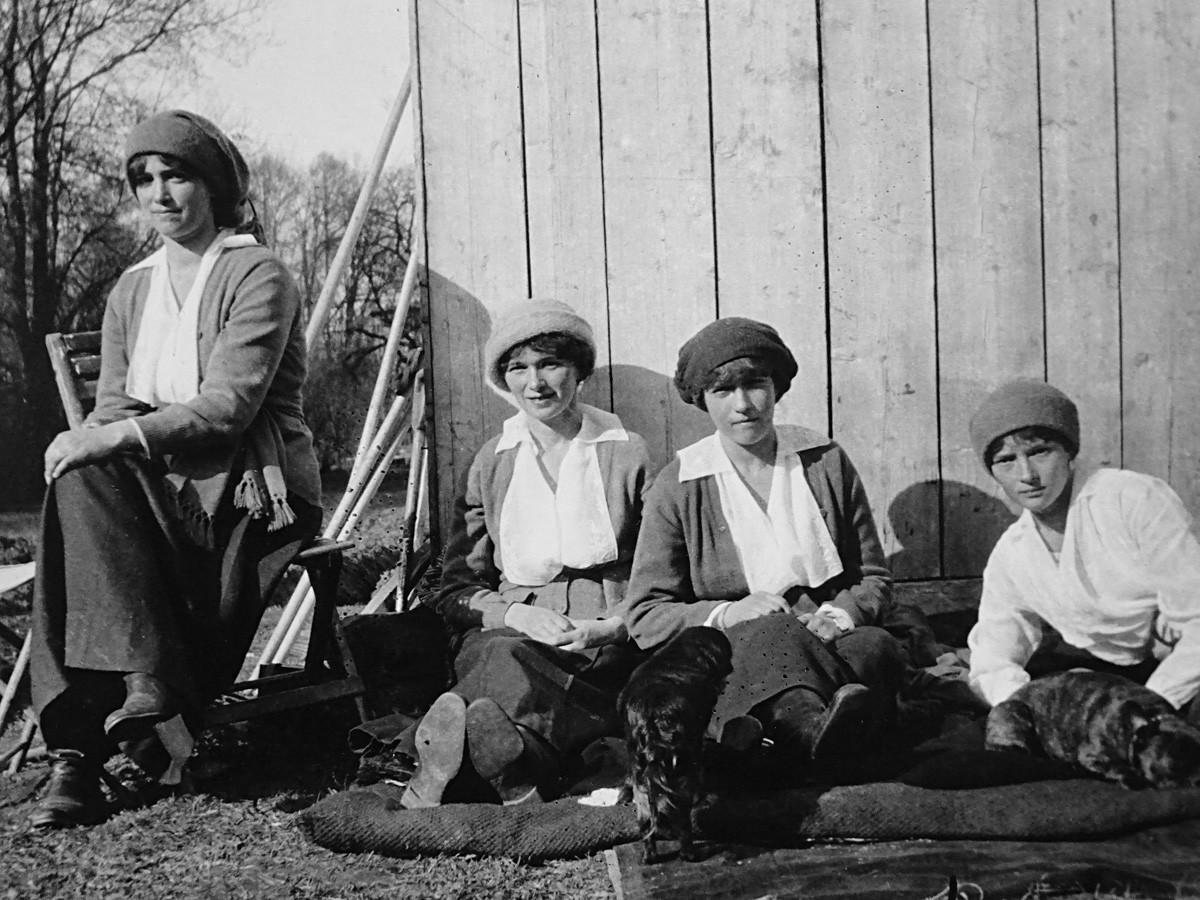 In 1917, as the Russian empire collapsed and the Romanovs were royals no more, Gilliard followed them into the horrors of de-facto imprisonment – first at Tsarskoye Tselo, then in Tobolsk (1,430 miles east of Moscow). “Gilliard was completely cut off from Switzerland. He was writing letters to his father and brother without knowing if they would be read,” wrote Gilliard’s biographer Daniel Girardin. Nevertheless, he notes that the rigorous Gilliard always reminded his Swiss relatives (from the middle of revolution!) to fulfill taxation papers properly.

As well as the royal family, their teacher carried on, always trying to cheer the children up and, of course, continuing their education. He even kept on photographing them – we owe many family photos of the last Romanovs to Gilliard. 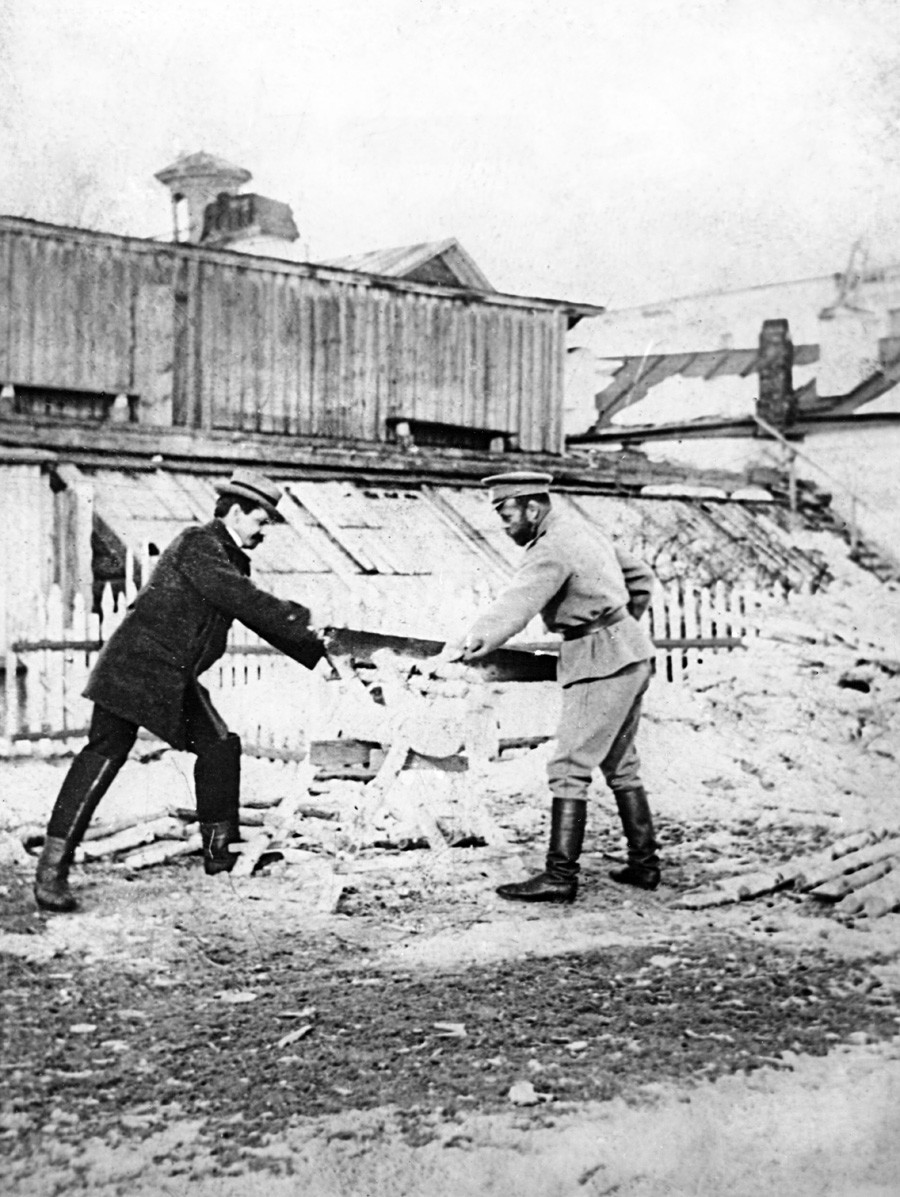 In April 1918, a Bolshevik commissar separated the family: Nicholas, Alexandra and Maria were moved to Yekaterinburg (1,050 miles east of Moscow), while Gilliard was ordered to stay with the rest of the children. In May the family was reunited in Yekaterinburg – but the Bolsheviks suddenly let Gilliard go, as well as Sydney Gibbes (English tutor) and Alexandra Tegleva, Gilliard’s future wife. 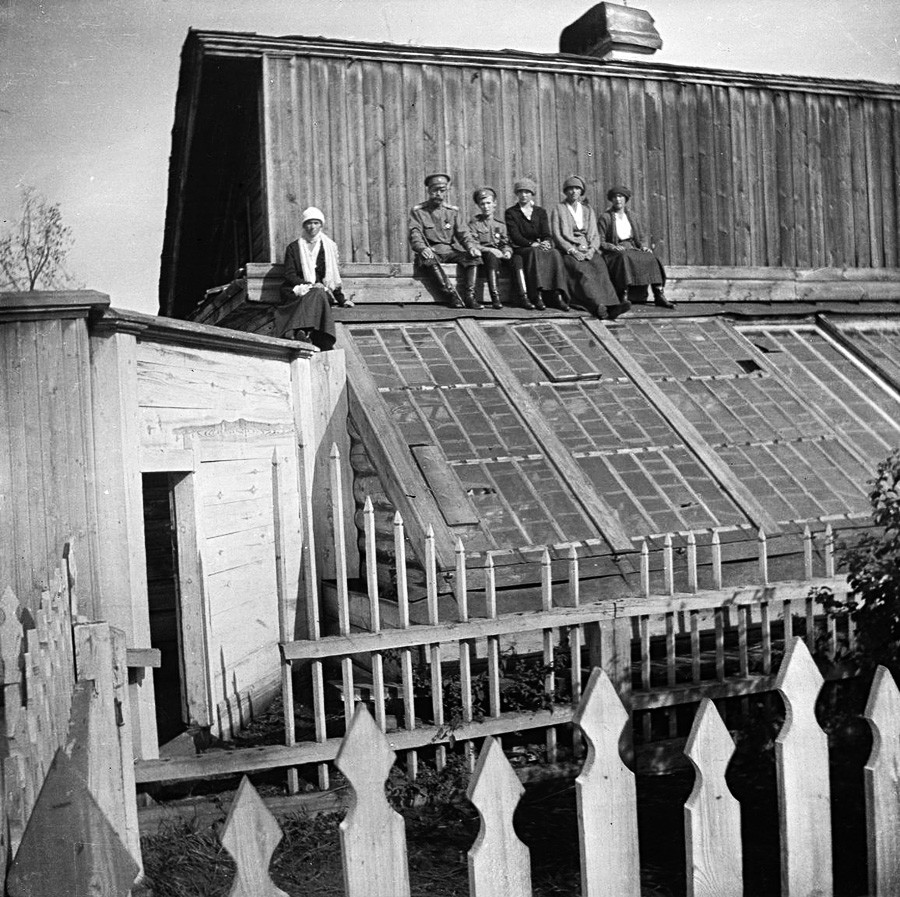 “I still don’t understand why the Bolsheviks kept us alive and set us free,” the tutor wrote in his memoirs. Indeed, it was a happy coincidence: in the city of Tyumen (1,600 miles east of Moscow) he, Tegleva and Gibbes were almost shot. “Speaking fluent Russian, he stated [in front of Bolsheviks] that he was protected by international law, waving his Swiss passport,” Girardin writes. Somehow it stopped them from shooting Gilliard – and soon the anti-Bolshevik White Army entered Tyumen, freeing him and his colleagues.

The ex-tutor took part in the Civil War, working as an intelligence officer and translator in the White Army. With the Whites, he entered Yekaterinburg – only to find out that all of the Romanovs, whom he loved so much, were shot on July 17, 1918. He couldn’t believe that the Bolsheviks would kill even the children but, unfortunately, it was true.

The rest is history. In 1918-1920 the Bolsheviks regained control over the country, so Gilliard retreated with the White Army, which led him to Vladivostok and, eventually, to his home in Switzerland. Marrying Tegleva, he promised her that as soon as there was a chance, they would return to Russia – but the chance never arrived. He died in Switzerland in 1962, aged 83.