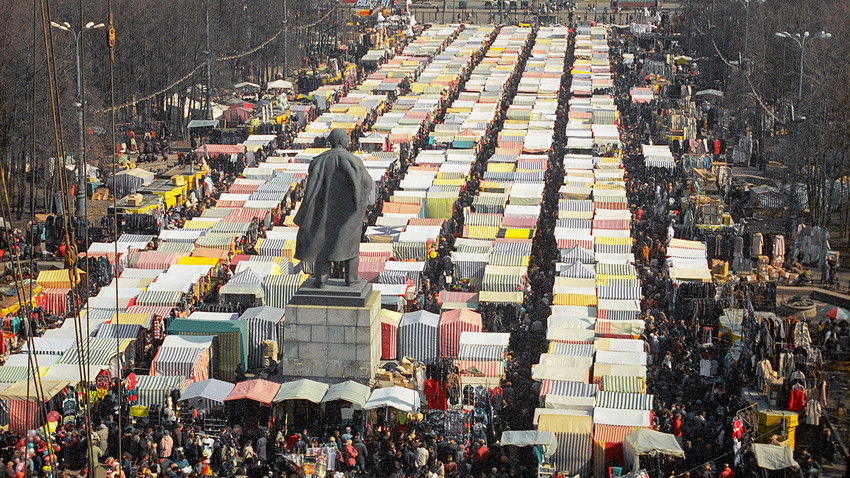 Yuri Abramochkin/Sputnik
Why cover the ground with cardboard? And what does the ideal checkered bag look like? If you don’t know the answer to these questions, read on. We discuss one of the main symbols of 1990s Russia.

When the Soviet Union collapsed, free trade suddenly became legal. That’s right, before then, private selling (be it a pair of self-knitted socks or a bottle of vodka) could land you in jail. That all changed in 1992, when street markets became a focal point of daily life and leisure.

Soon, however, they were replaced by shiny new shopping malls centers, and only a small handful of markets managed to survive in their shadow. That unique atmosphere in which they thrived has gone forever. Here’s why. 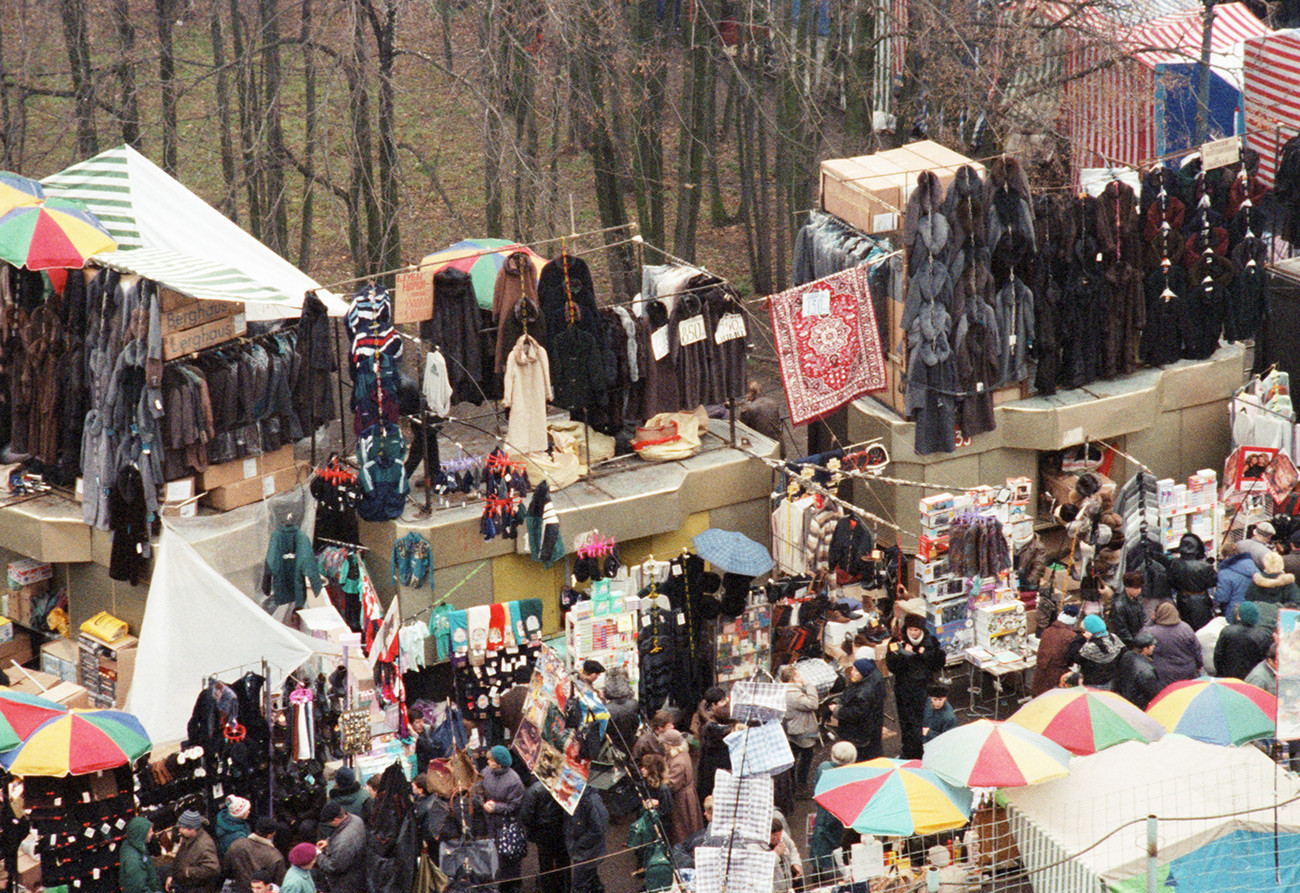 As goods of every possible sort and quality became freely available, markets mushroomed. They filled vacant lots, streets, underpasses, squares, stadiums (the largest market being at Luzhniki Stadium). Even hospitals and schools joined in the brisk trade.

It all resembled a post-Soviet version of the Wild West. Makeshift markets sprung up literally everywhere. All that was needed was a tent or two. Sometimes, sellers didn’t even bother with that, and traded directly off the back of trucks. Things like sanitation and heating were an irrelevance.

On the upside, buyers could get dressed up from head to toe without breaking the bank (just imagine an open-air Walmart), haggle, and find everything they needed in one place – from auto parts and pirated CDs to homemade compote. No modern shopping center would ever come close to replicating it. 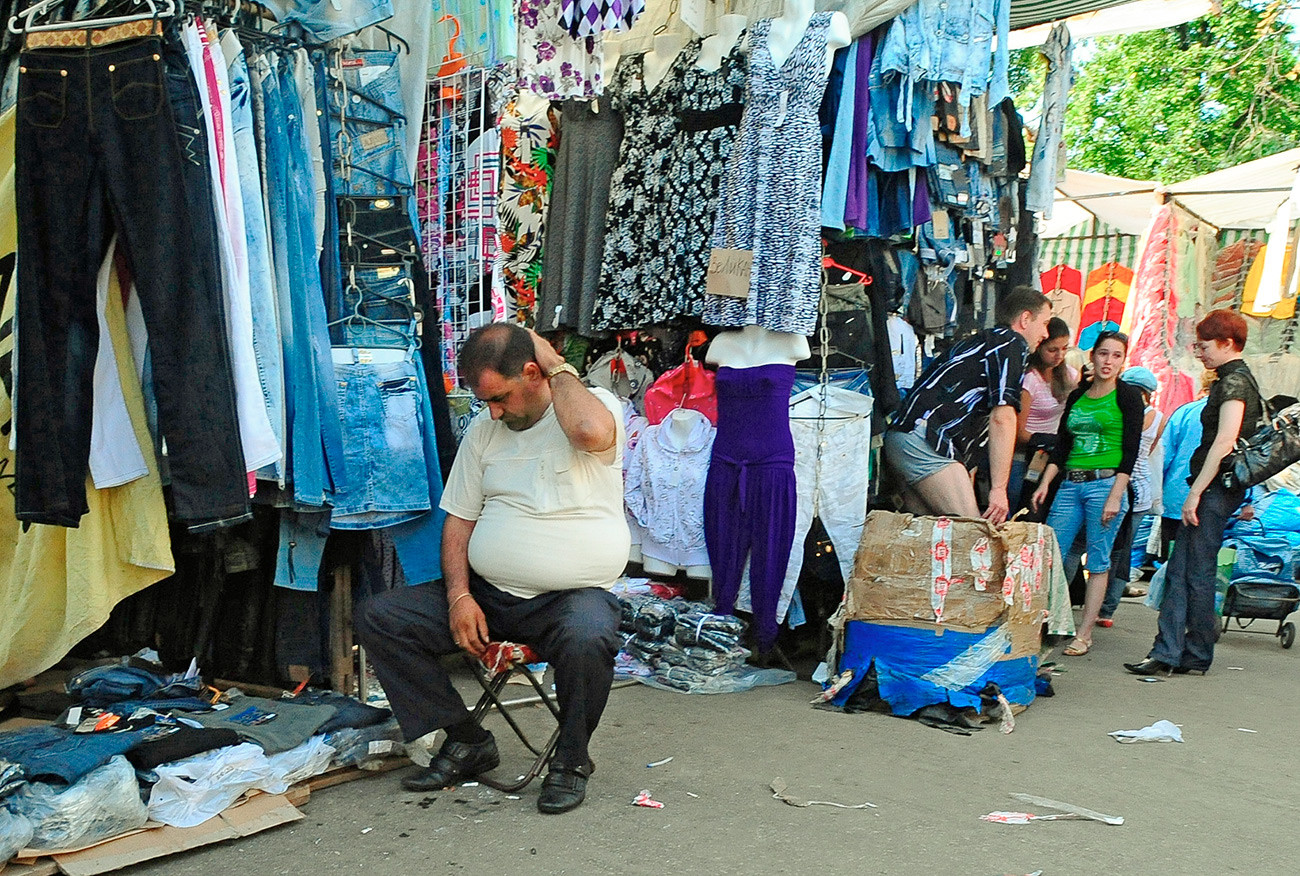 This requires a bit of explanation. As you might guest, tents and trucks offered no fitting facilities. Instead, a large piece of cardboard was laid out in a relatively secluded corner where buyers could take off garments without getting them wet or muddy (markets operated in rain, sleet, and snow). To be fair, some sellers were polite enough to hang a curtain up to hide the spectacle from prying eyes. But it wasn’t mandatory. Unlike the piece of cardboard on the ground. 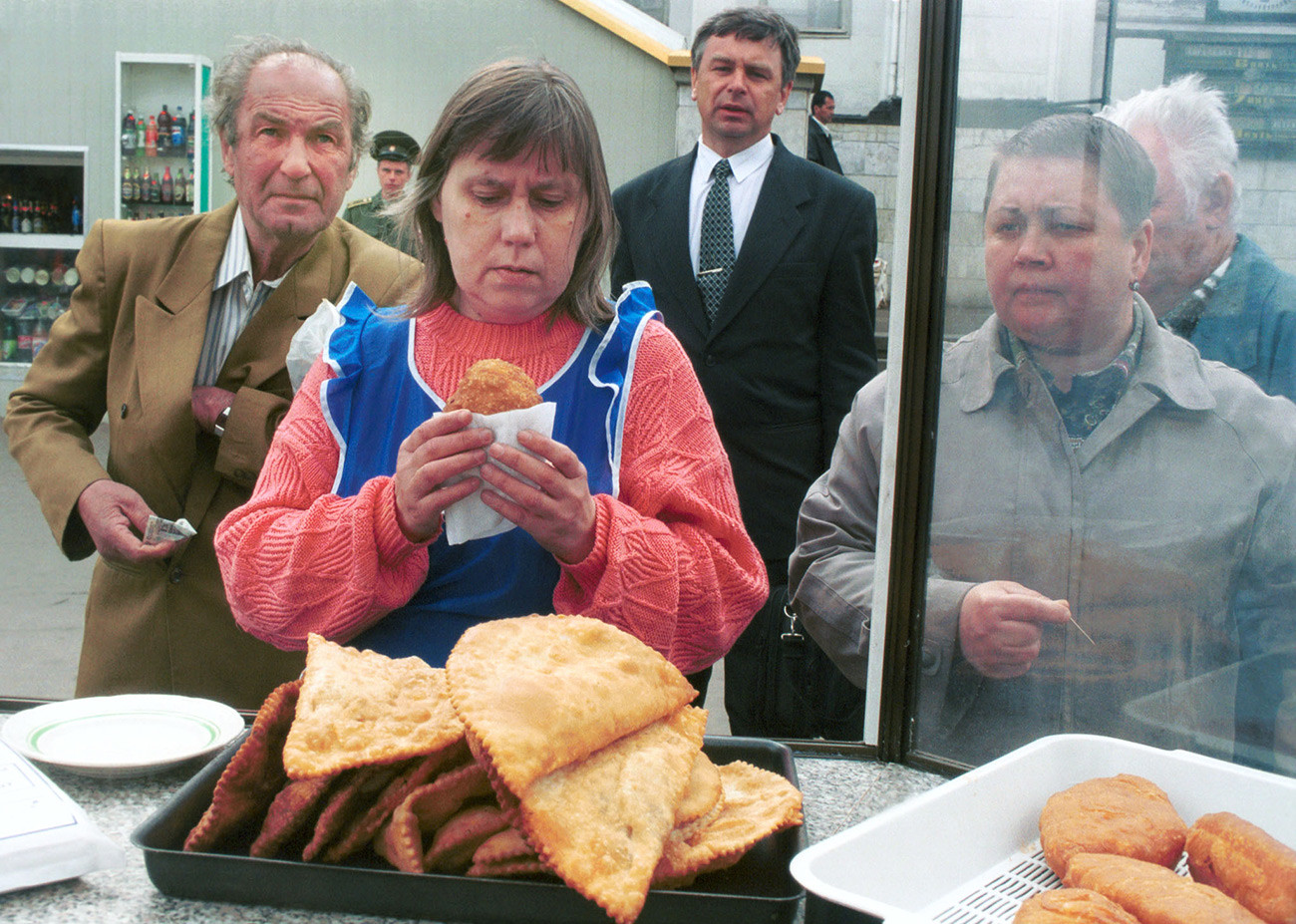 Every day, women pushed carts laden with food and drink through the rows of stalls, selling tea with lemon and sugar, sandwiches, Russian salad, and waffle tubes. Everyone looked forward to their arrival, both sellers and buyers. Babushka’s salad from the cart was always tastier than a box lunch. For a long time, many markets had no other catering facilities other than these carts. Only later would rudimentary “food courts” appear: sometimes a row of pavilions serving pancakes, candies, or kebabs. 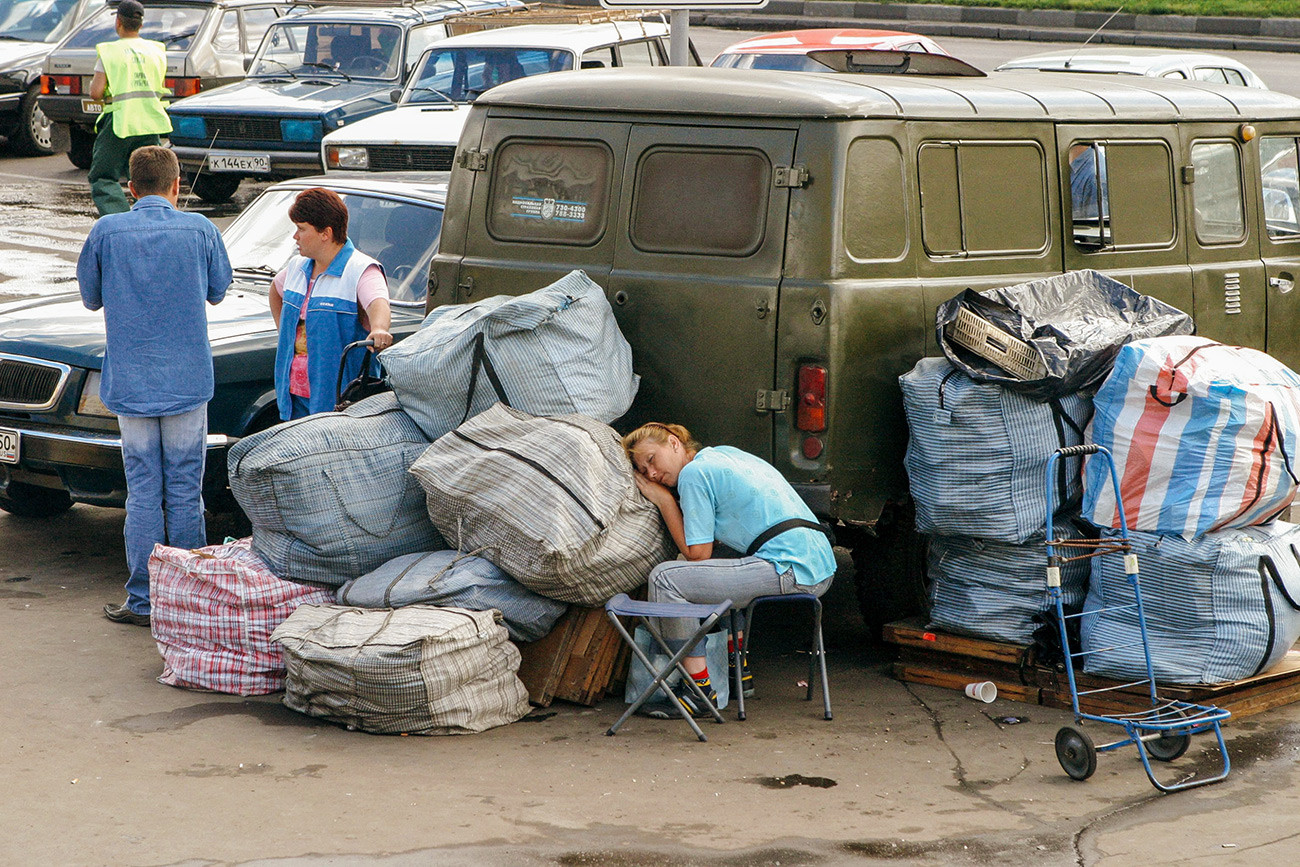 Shuttle traders were the superheroes of markets. They traipsed from city to city (sometimes country to country) to buy up goods, and could cover enormous distances in a single day. They didn’t seem to suffer from fatigue and had vast networks of contacts acquired over many years of almost daily journeying around the country. In the 1990s, many became newly minted “businessmen” (in the Russian sense). They were immediately recognizable by the huge checkered bags they carried everywhere they went. These were always chock-full of goods, and doubled up as something to sit/sleep on or eat off while waiting for a train or plane.

Although shuttle traders with their bags were not overly presentable (no one was back then), some amassed a fortune. 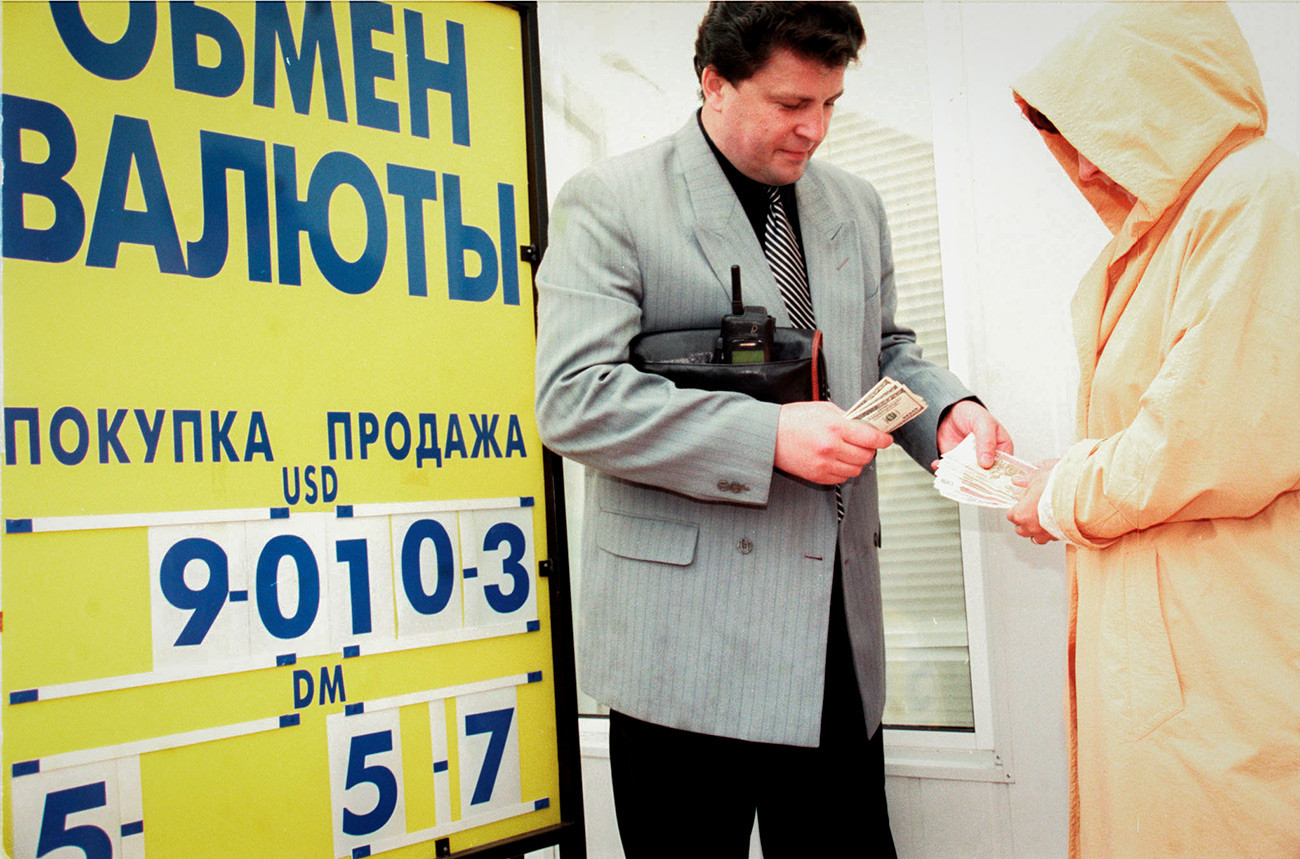 When it came to selling in the Soviet Union, foreign currency was the same as anything else, i.e. a crime. Not surprising, then, that the very first markets had “exchange offices” – men with wads of cash in their pockets and a “Buy $/DM” sign around their neck (DM = Deutschmark). Looking back, it all seems a little bit shady, to put it mildly, but at the time it was par for the course. People with signs around their necks gathered at market entrances, and spent the day smoking and drinking tea in between serving customers. 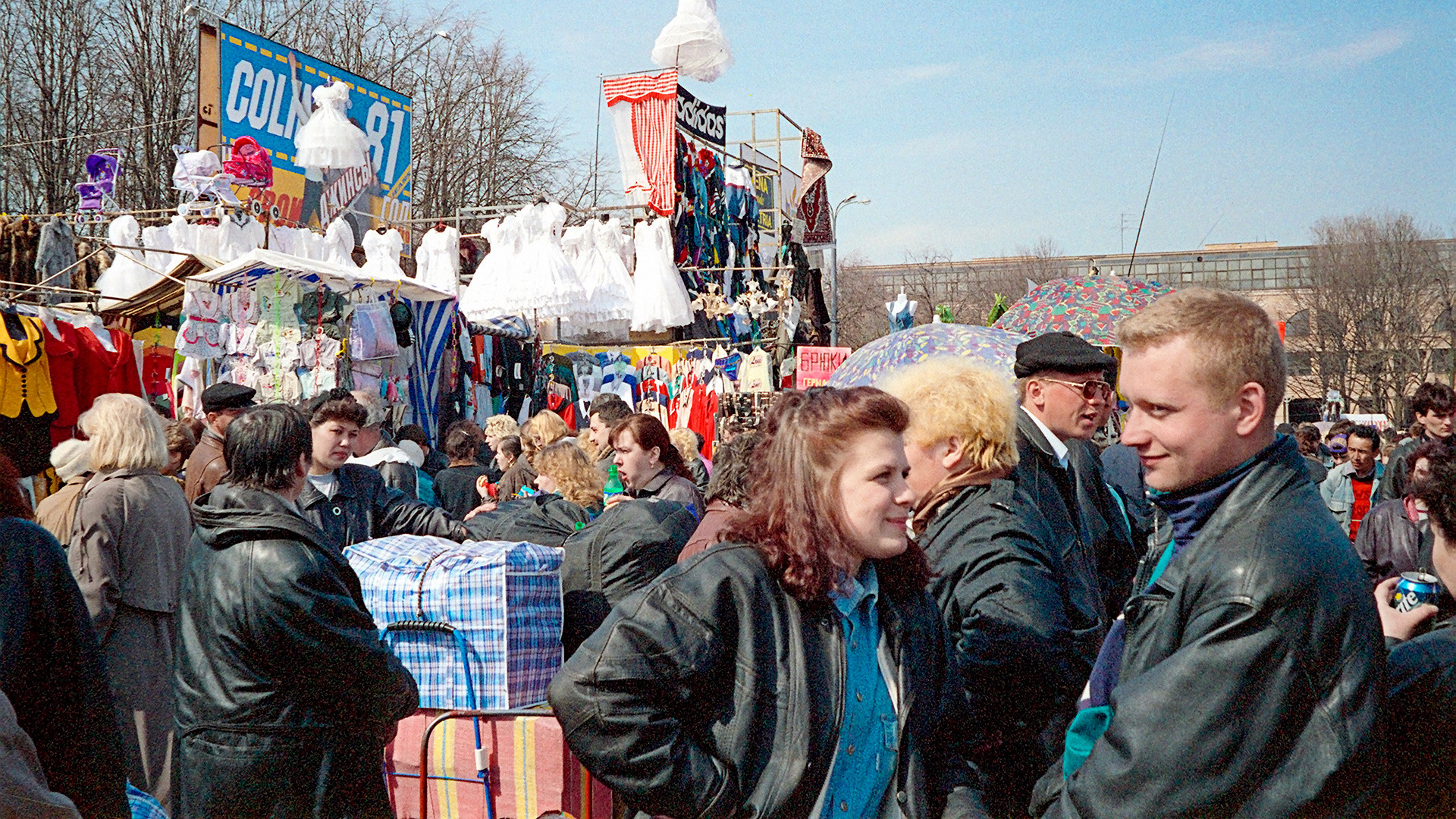 The average man in the street dreamed of owning a black leather jacket, a sheepskin coat, and a pair (or several) of jeans. There was no money to buy decent stuff from foreign brands, so cheap counterfeit items came to the fore. The quality was shocking, but not the price. They were supplied from nearby countries by those same shuttle traders. Turkish goods flooded the markets, and became their unofficial symbol.

“My friend Anton got into the trade through a few acquaintances of his, one of whom imported goods in an old Volvo pickup. We used to hang out items for sale on a metal structure. That was at Luzhniki Stadium,” recalls journalist Yuri Lvov. “The over two-meter-high stand we called beda (‘trouble’) – a very common word in Russia back then. That was also the name of the most popular women’s leather jacket model. Together with a shortened version codenamed polbeda (‘half-trouble’), it was worn by half of Moscow.”

It was the same story with denim. There was even nothing shameful about the triple denim look: jeans and denim jacket, topped off with a denim cap.