Google search fails: ‘When did the Soviet Union become Russia?’ 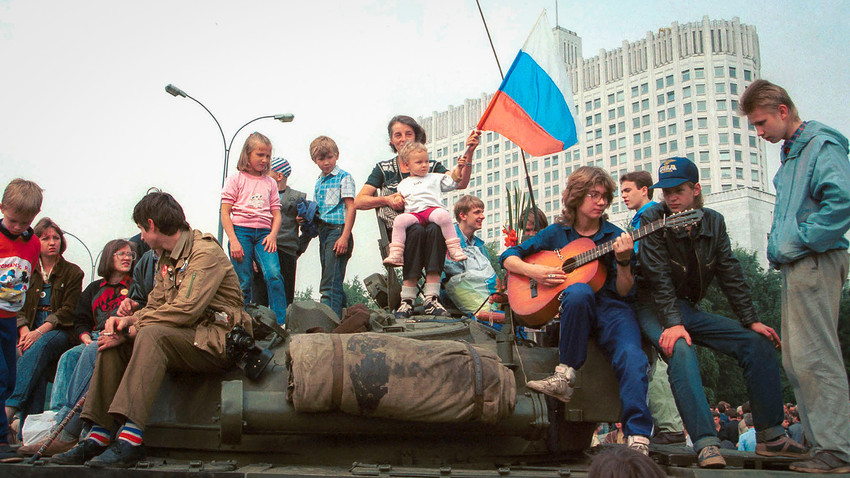 People in Moscow during the coup attempt of 1991, when hardline Communists failed to seize the moment and undo the perestroika.

Getty Images
As a result of cabinet battles and the whole Union falling apart, a new state – the Russian Federation – was born.

Russia, formerly known as the Russian Soviet Federative Socialist Republic (RSFSR), was one of the 15 republics that existed within the USSR from 1922 to 1991. In fact, it was the biggest of the 15 and the ‘heartland’ of the Socialist state. The RSFSR was always crucial for the USSR’s existence: it was in Moscow where decisions were made, and Russians constituted the majority of the Union’s population.

The thought of the RSFSR leaving the USSR was something close to imagining Washington D.C., New York and California seceding from the U.S., i.e. impossible. But this is exactly what happened. When did it happen and, most importantly, why?

A state in trouble 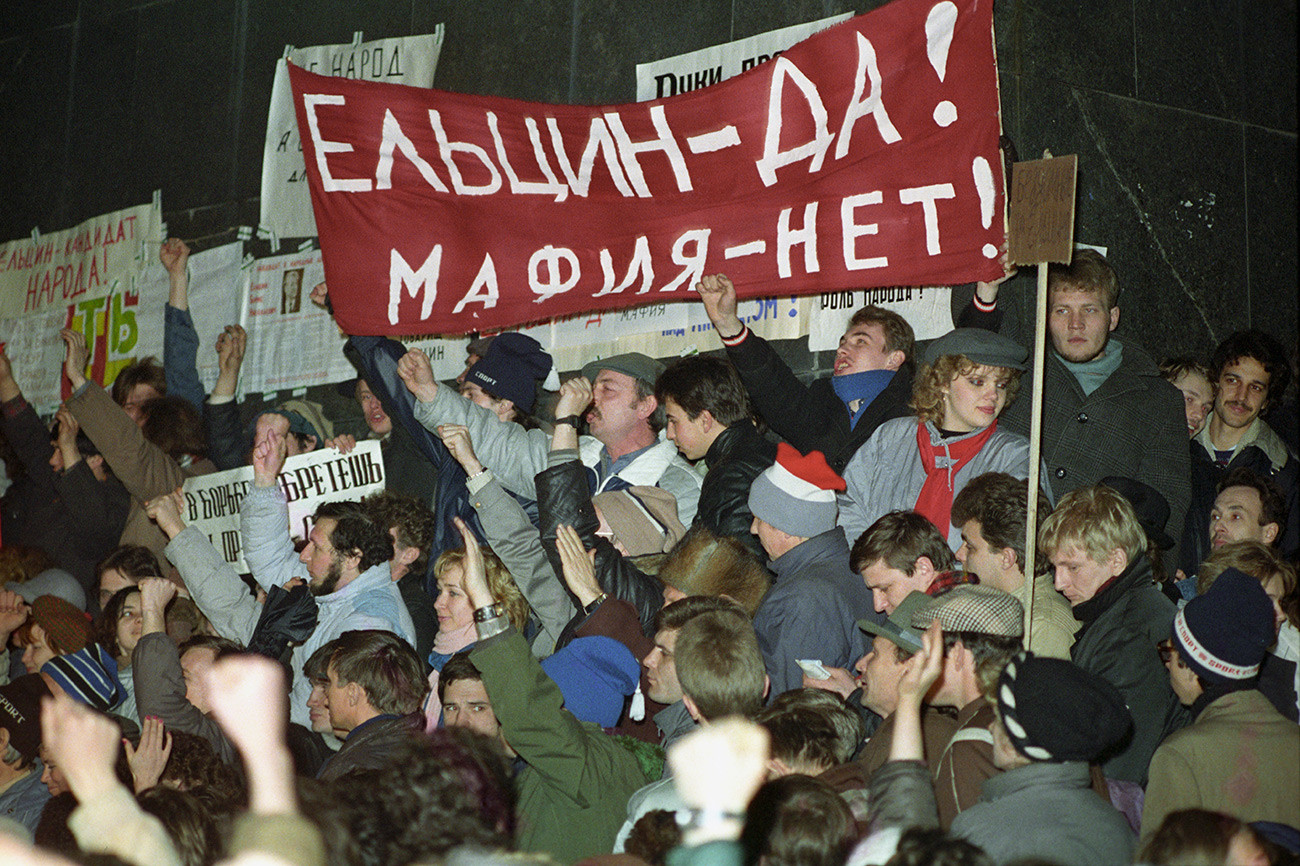 A demonstration in Moscow in support of the democratic reforms.

The Soviet economy had been struggling since the late 1980s: overburdened with military spending, the state had trouble providing its citizens with basic goods, including clothing and food. Oil prices dropping from $24 to $12 per barrel in 1986 worsened the situation drastically.

Against this backdrop, Mikhail Gorbachev’s policies of glasnost (“transparency”; free criticism of the party and the government) and perestroika (“rebuilding”; restructuring the economic system) were not very successful. “The government couldn’t control its own reforms or predict its consequences,” publicist Alexey Durnovo wrote, answering a question on the reasons why the USSR fell apart on TheQuestion (Russian Quora).

Enraged by the dire economic situation, people now had an opportunity to openly criticize the powers-that-be, which predictably led to serious crises, including ethnic ones. 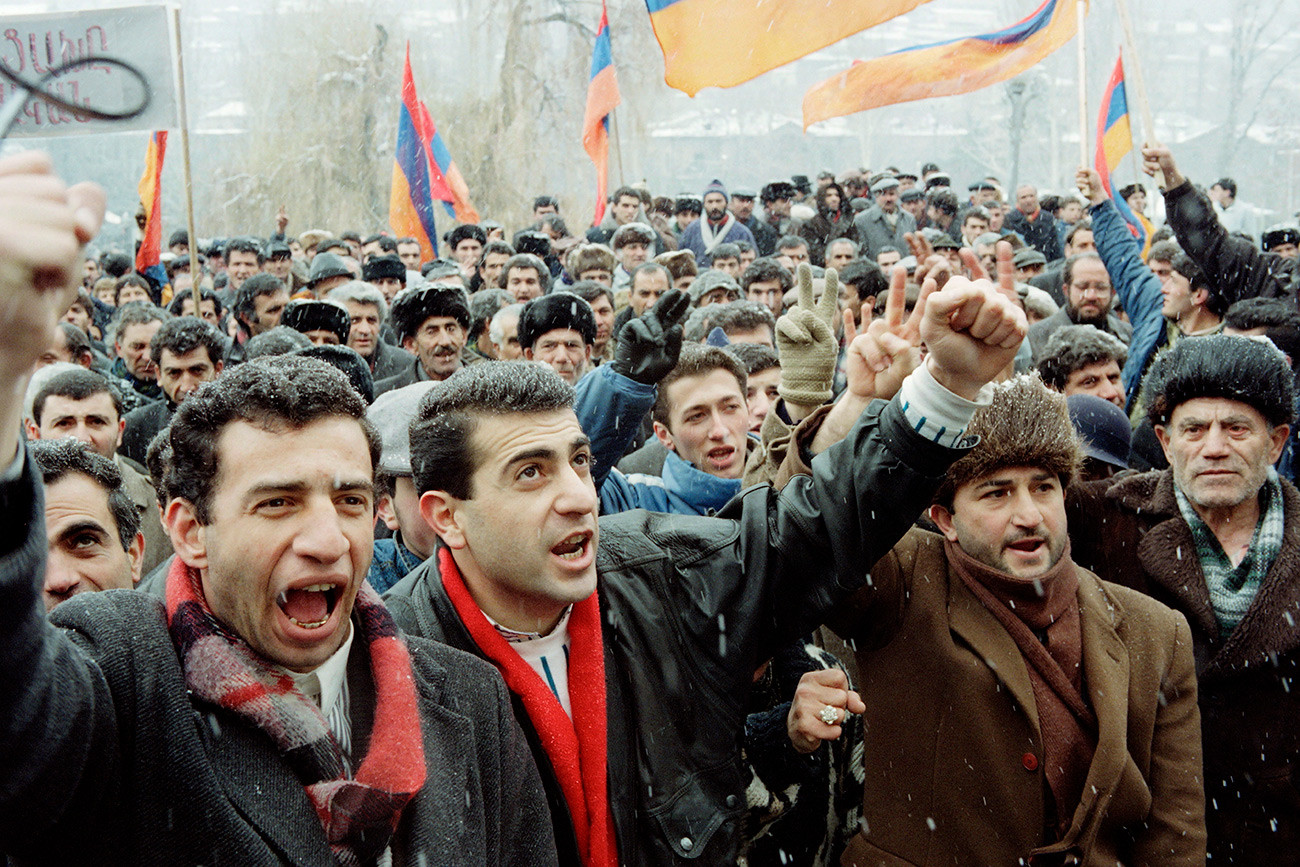 A crowd gathers in Yerevan (Armenia) to protest Azerbaijani actions in the disputed region of Nagorny Karabakh.

Among other reasons, Durnovo names regional elites’ pursuit of power. “It was honorable and profitable to be the main Communist in a Soviet Republic. But being a president of an independent state was even better. So, as they felt the Union was getting weaker, regional elites started to separate their ‘pieces’,” he writes. Add to this ‘sleeping’ ethnic conflicts and you suddenly got uncontrollable chaos in multiple Soviet regions.

During the late 1980s, several conflicts broke out: the Armenian-Azerbaijani conflict over the Nagorny Karabakh region, clashes between Georgians and Abkhazians / Georgians and Ossetians, quarrels between different ethnicities and religious groups in Tajikistan, etc. The government’s attempts to calm the tensions down proved to be totally ineffective. Later, in many cases, these conflicts would turn into full-scale wars, killing thousands of people.

Check out our article on how the USSR dissolved – in the form of a playscript.

This state is too small for both of us 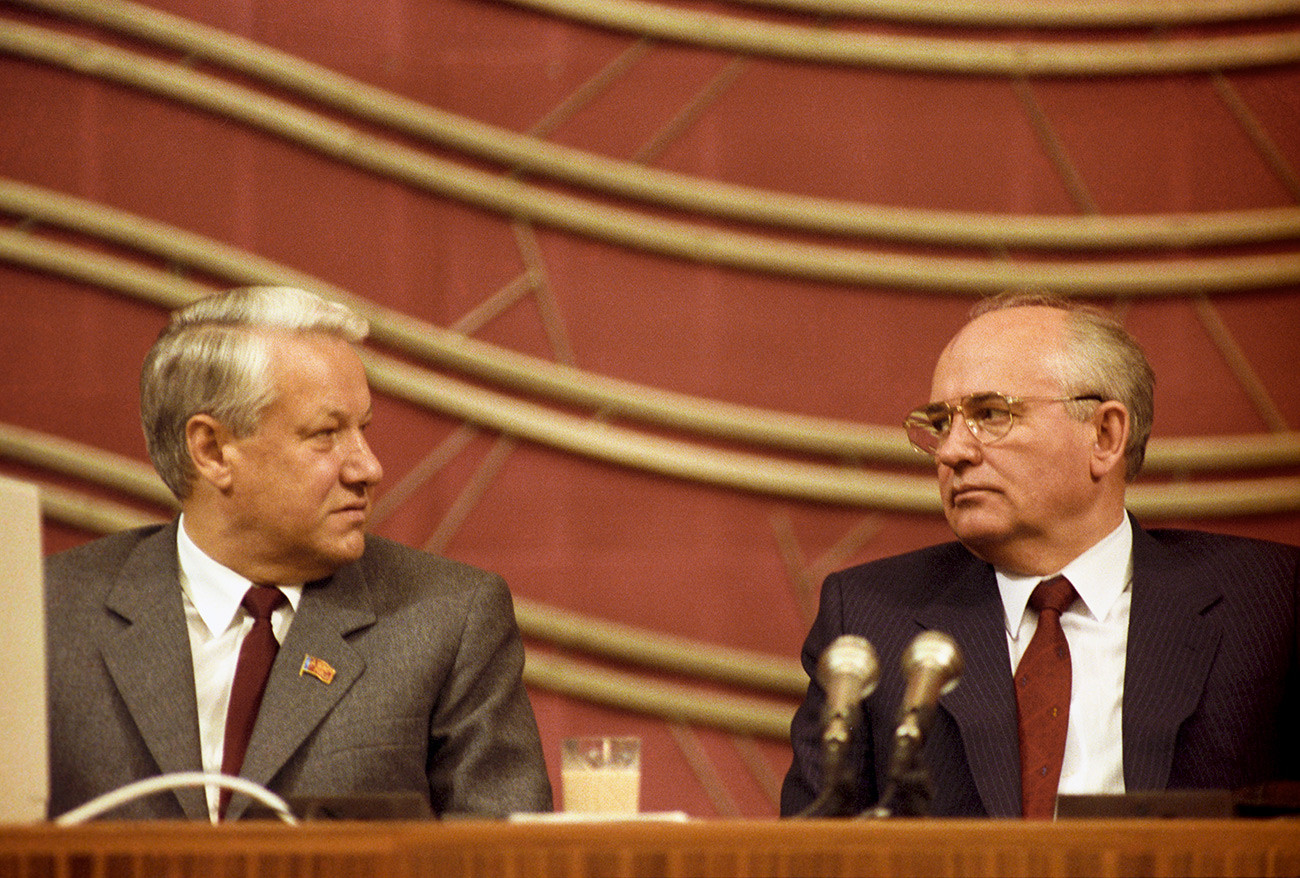 Boris Yeltsin and Mikhail Gorbachev facing each other.

With Soviet republics declaring independence one after another in the late 1980s – early 1990s, Gorbachev, being the president of the USSR (de-facto heading the federal power) struggled to keep the country united. Many of the heads of the republics within the Union were uneager to obey him - especially the leader who was heading the RSFSR (a subject within the USSR, much like Ukraine or Georgia at the time). This meant Gorbachev faced fierce competition even in Moscow. And his rival there was a popular Russian leader named Boris Yeltsin.

Yeltsin was elected the chairman of the Presidium of the Supreme Soviet of the RSFSR in May, 1990 (despite Gorbachev opposing his candidacy) and turned this mainly bureaucratic post into a very important one: on June 12, 1990, the Congress of People's Deputies of the RSFSR adopted a declaration of sovereignty. It wasn’t leaving the USSR yet, but the declaration created a strange situation: now there were two leaders in Moscow, one for the USSR (Gorbachev) and one for the RSFSR (Yeltsin). 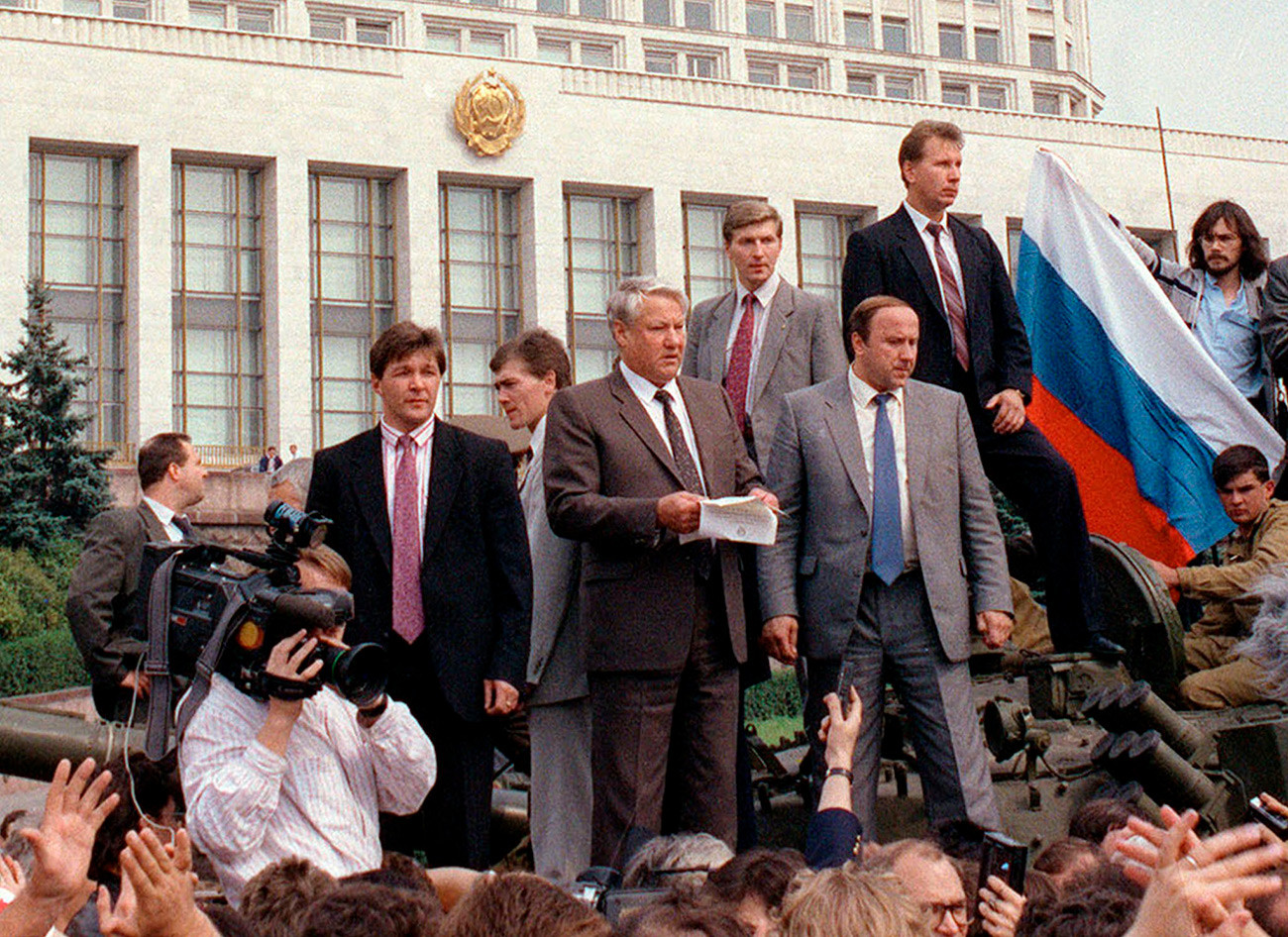 Boris Yeltsin (C) makes a speech standing atop in August, 1991.

Yeltsin then went further: in July, 1990, he left the Communist party, openly demonstrating his disobedience to Gorbachev. The RSFSR held its first presidential elections on June 12, 1991 – and Yeltsin won. Despite his opposition to Gorbachev, he played an active role in defying a coup attempt of hardline Communists opposing both him and the USSR leader a couple of months later. Therefore, Yeltsin portrayed himself as a strong leader, who led the people’s resistance, while Gorbachev was on vacation in Crimea during the coup attempt.

By late 1991, Gorbachev, formally remaining the president of the whole USSR, had close-to-zero influence on its policies. On December 8, 1991, Yeltsin met the presidents of Ukraine and Belarus (who had also declared independence by that point) to sign the Belavezha Accords that recognized the dissolution of the USSR.

Gorbachev had no other option but to accept what had already happened. On December 25, 1991, he officially resigned as president of the USSR. The Communist state ceased to exist – from then on, every one of the 15 republics was on their own, including the Russian Federation.