History
Boris Egorov
Igor Zerembo/TASS
Russian landing operations have often been poorly planned and organised. However, paratroopers and marines have been so persistent and fearless that they seized victory from the jaws of potential defeat. 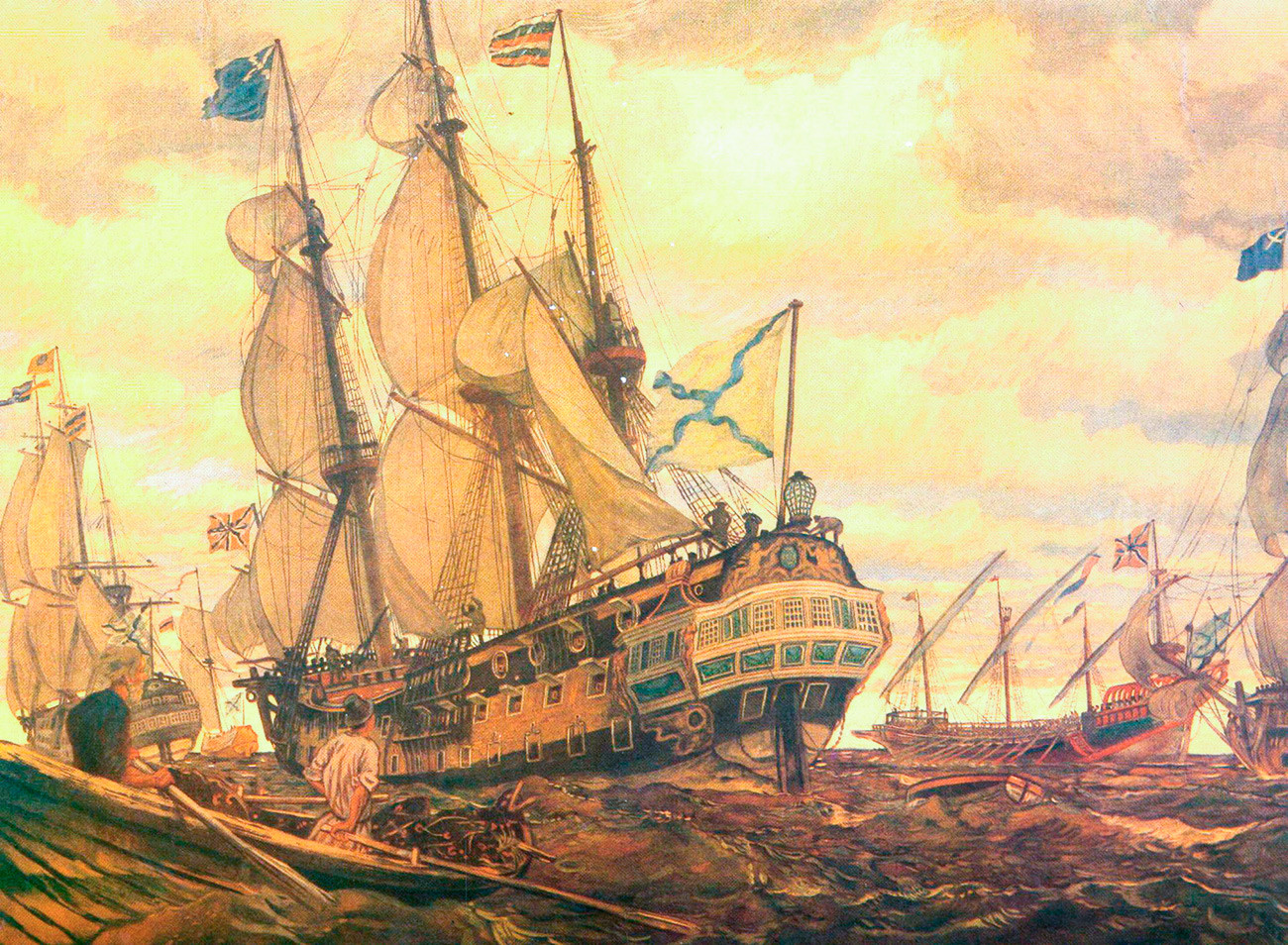 By 1719, the result of the Great Northern War was clear for both Sweden and Russia. The only question was how many territories the Swedes would lose. Seeing that the Swedish leadership was reluctant to conclude the peace, Russian leaders decided to make a final, “motivating” strike.

Over 26,000 Russian troops on 132 galleys, 21 ships of the line and 100 boats landed on the Swedish mainland and islands near Stockholm and started to pillage the territory. The troops didn’t plan to attack the enemy capital. It was also ordered not to kill the local population or burn churches. The plan was not to make the Swedes angry but to force them to conclude a peace.

Due to a counterattack by the Swedish fleet, Russian landing parties were forced to retreat. However, they still managed to pillage and burn 8 cities, 140 estates, 21 factories, 1,363 settlements, 21 mills and 26 military warehouses.

Landings of the troops continued to occur in 1720 and in 1721 until Sweden finally surrendered. 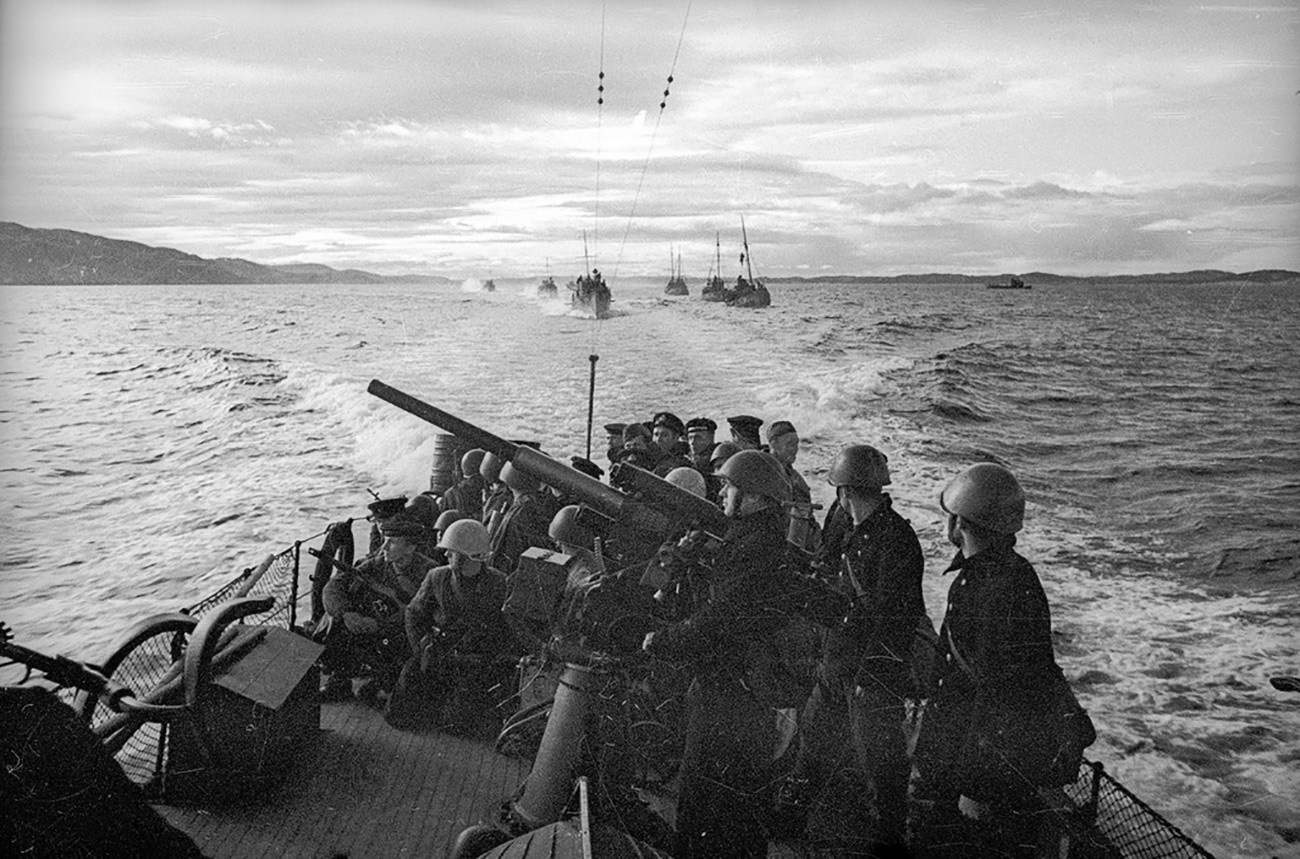 While most of Soviet military operations and counterattacks in 1941 ended in catastrophic disasters, the Kerch-Feodosia operation was a remarkable exception. At least, at the beginning.

By the end of 1941, the whole Crimean peninsula, except for besieged Sevastopol, was occupied by the Wehrmacht. To regain control over the lost territory, on 26 December the Red Army launched major landings in different parts of Crimea’s eastern region - the Kerch Peninsula.

At Kerch, soldiers jumped from landing craft straight into the cold winter water and moved on shore soaked to the skin. This led to huge casualties because of frostbite. The strong frost on the following days froze the Kerch Strait and allowed other troops, even light tanks, to land over frozen water.

In less than a week the Red Army crushed enemy resistance and liberated the whole Kerch peninsula. It lost over 40,000 men, while German losses are estimated at 10,000.

Despite the success of the landing, Soviet troops later lost the initiative and by May 1942 were again kicked out from the Kerch Peninsula. On 4 July the same year, Sevastopol surrendered, and the whole of Crimea fell into German hands. 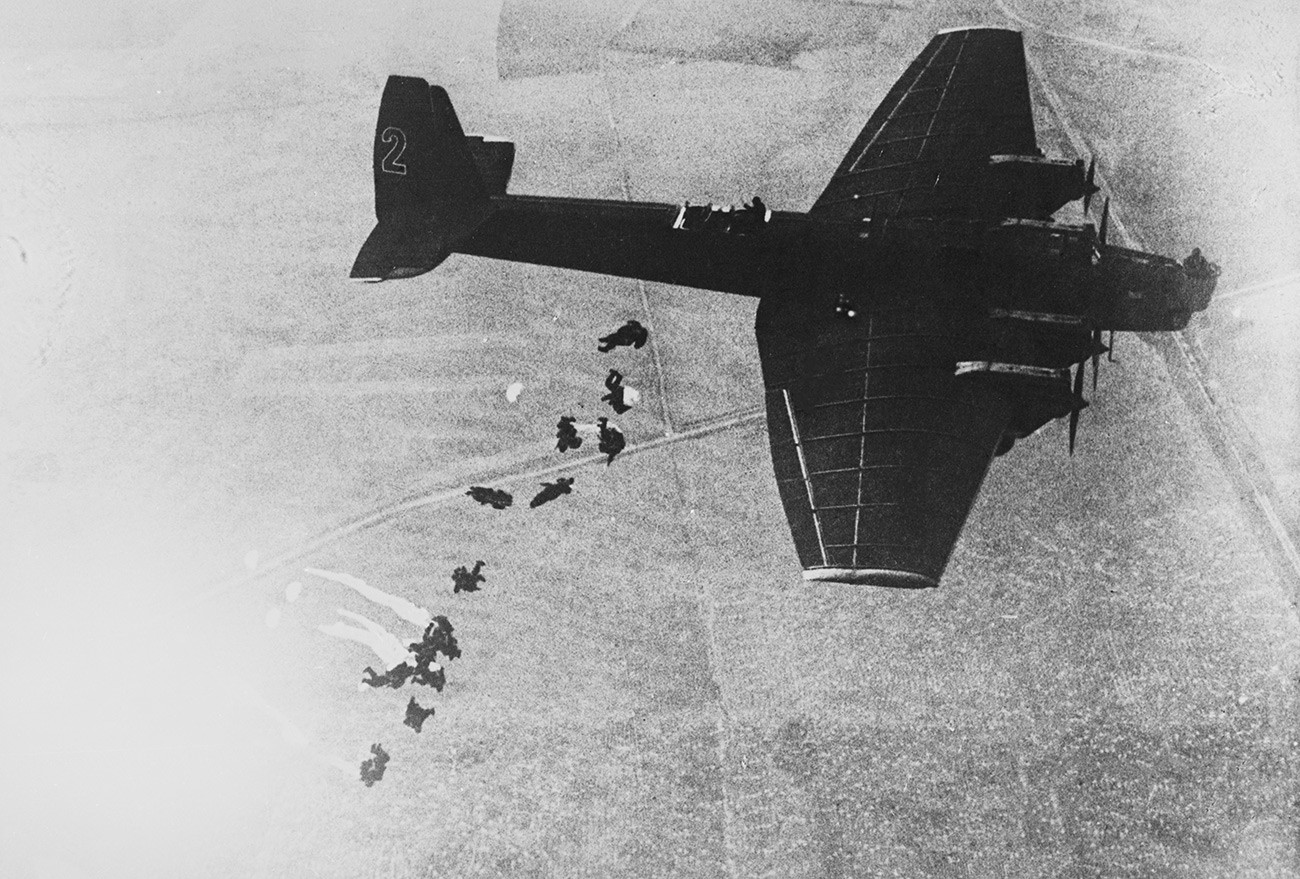 After the successful counteroffensive of the Red Army near Moscow in December 1941 the German assault on the Soviet capital, dubbed Operation Typhoon, collapsed. The enemy was pushed back westwards 90-250 miles.

The Soviet command decided that the time to gain initiative in the war had come. A widespread offensive against the German Army Group Center was launched in January 1942, and airborne landings were to be an important part of it.

Several groups of airborne troops were landed in the enemy rear near Vyazma In January-February 1942. Overall, more than 10,000 Soviet troops, armed with 320 mortars, 541 machine-guns and 300 anti-tank rifles fought the Wehrmacht behind enemy lines. Cutting German supply lines and hitting them in the back, the landing parties were supposed to move towards the advancing Soviet troops.

However, the operation didn’t go as it was planned. The major Soviet offensive ebbed with the Red Army suffering heavy losses. Instead of several days, the airborne troops were stuck in the enemy rear for almost five months. There they were strengthened by the 1st Guards Cavalry Corps, who broke through enemy positions.

These joint forces crossed enemy occupied territory over a distance of more than 500 km, avoiding encirclements, defending and counter-attacking, organizing saboteur missions and ambushes. Five German divisions were kept tied up by their actions.

Before the paratroopers and cavalrymen could reunite with the main Soviet troops in June, they had killed over 15,000 enemy soldiers. 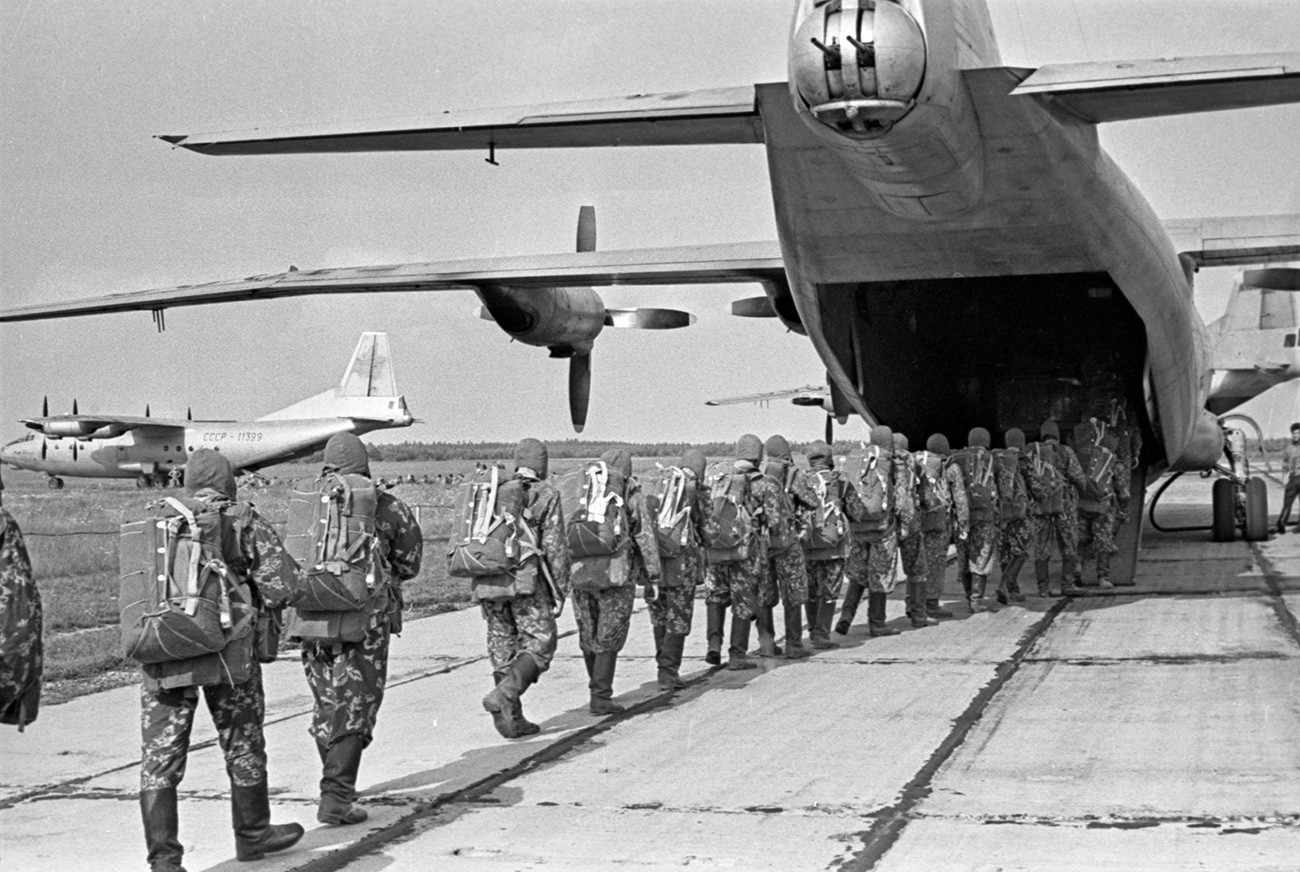 In 1968 one of the key members of the Soviet Bloc - Czechoslovakia - decided to go its own way. A period of democratization and liberalization in the country, launched by the government of Alexander Dubček and widely known as the Prague Spring, threatened to entirely detach the country from the Soviet sphere of influence.

There was no chance that the USSR would tolerate this. Together with other Warsaw Pact allies the Soviets launched Operation Danube - the military invasion of the country and regime change to one that more suited Moscow’s demands.

At 2am on 21 August, a “civilian” An-12 requested permission to land at Prague’s Ruzyně airport (today known as Václav Havel Airport) due to technical failure. After landing, hundred of soldiers ran out of the aircraft. These were paratroopers of the Soviet 7th Guards Airborne Division.

They quickly took the airport under control and secured further landing for other troops with equipment from countless planes, landing in Prague every minute. Simultaneously major columns of Warsaw Pact troops entered Czechoslovakia from different directions. Over half a million troops took part in the operation.

Besides Ruzyně, airborne troops landed at other key airports around the country. Thus, at Brno they jumped off landing planes before they had fully come to a stop. The paratroopers wore new blue berets, recently adopted by the Soviet Airborne Troops, leading locals to initially confuse them with NATO troops.

At 4:30am Soviet paratroopers assaulted government buildings, seized Dubček and his ministers and held them for several hours before handing them over to the KGB. The Prague Spring was totally crushed. 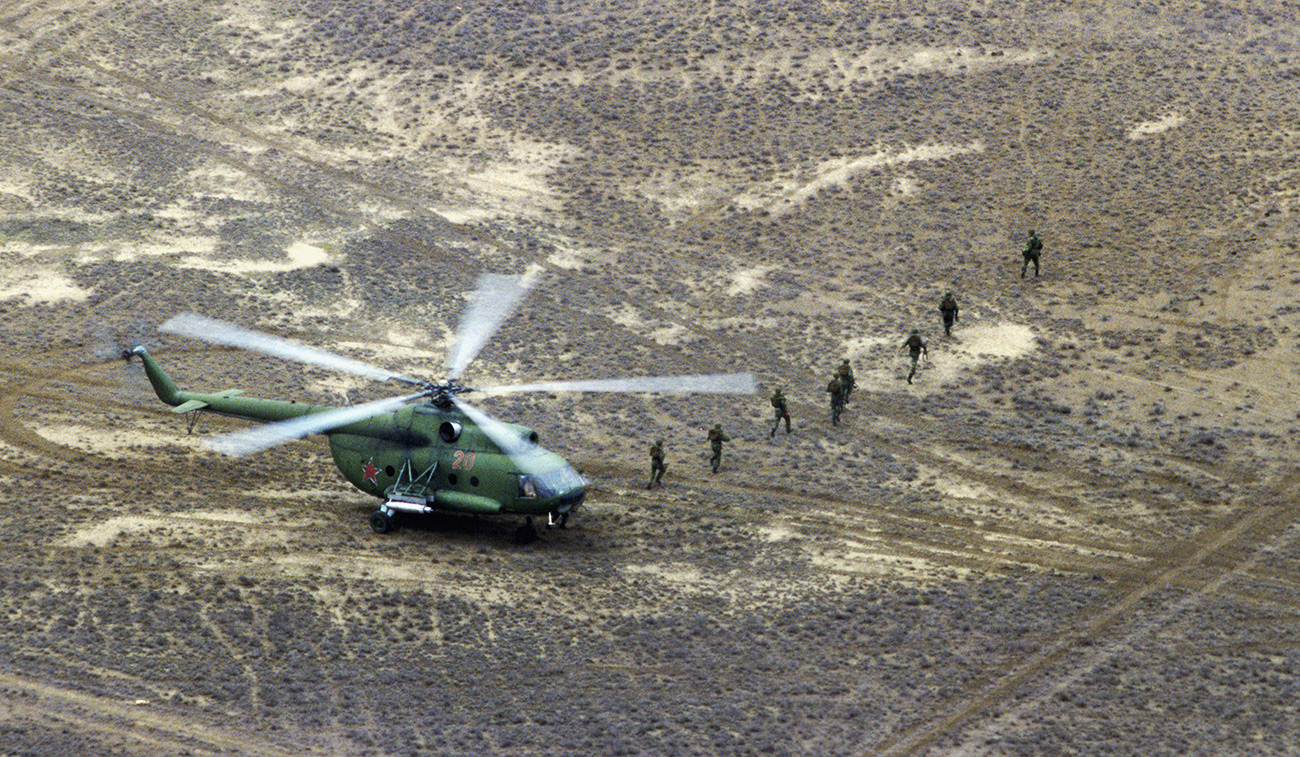 This was one of the top Soviet successes during the Afghan War. As a result of Operation Trap Soviet troops captured an important Mujahideen fortified supply base at Kokari-Sharshari on the border with Iran.

However, it did not start out so well. On 18 August, 1986, soldiers of the 345th Independent Guards Airborne Regiment planned a covert landing on dominating heights not far from the Mujahideen base. But, as so often during that war, the Mujahideen were perfectly aware of the time and place of the landing.

Paratroopers were forced to land from helicopters under heavy enemy fire, suffering high casualties, especially from enemy mortars. Mi-8 helicopters worked ceaselessly to take off the wounded and deliver reserves to the battlefield.

After they finally overcame resistance, the paratroopers secured the landing of the main troops and quickly marched to the enemy base, blocking it from different directions.

Supported by air strikes of Su-25s and artillery fire, on 25 August, the Soviet troops took the base, capturing 26 ammunition dumps, 25 fortified houses and 32 cave shelters. The key Mujahideen “Western United Group” was terminated in the process, although its leader - Ismail Khan - one of the most important Afghan commanders - managed to flee to neighboring Iran.