How Russia's size has become its problem

Natalia Nosova
When you live in a country like ours, geography reigns supreme over nearly every aspect of life. How does the Postal Service affect our government? Why is Russia in desperate need of at least 50 incorruptible governors? And why do Russians so rarely live detached from the group?

Is Russia a European country in the true sense of the word? Undoubtedly so. And not only since Peter the Great’s times - but from the very moment that Russian culture began to have an indirect influence on the development of Europe by stopping the onslaught of Mongolia’s Batu Khan on the West. The Mongolians in 1241 reached Hungary and had been within an inch of invading the Holy Roman Empire. But by then Batu’s army was stretched thin across the vast sprawling territory of the Rus. It’s as though the Rus swallowed them up, draining the Mongolian warriors of their might - something it would later also do to Napoleon, and then again, to  Nazi Germany.

But size is precisely the dimension where things could always go very wrong for Russia - so much so that the Mongols didn’t even want it. Too many cities spread out too thinly - it had been much easier for Tatars to rule from the capital of the Horde before Russian princes smartened up and decided to take back their land. For the same reason, the Russians would have taken 200 years to make that happen. Every principality in Russia equaled Belgium or Albania in size (take the Tver region, with its 28 thousand square kilometers). 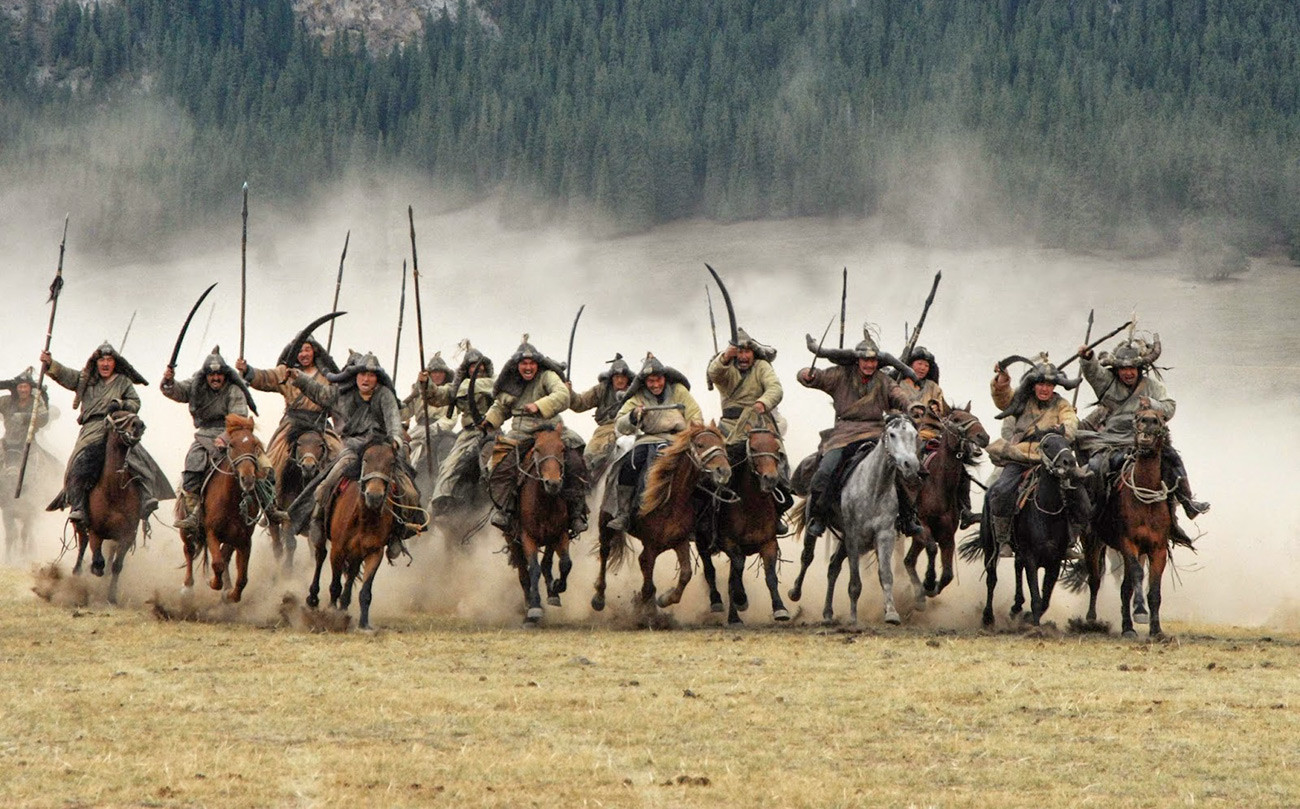 It was geography that made it practically impossible to have any other form of government than the one we have to this day. Ruling from the center was always a gargantuan task due to the vast distances between principalities. We are accustomed to looking at country sizes from the outside; now let’s have a look at some examples of what Russia feels like from the inside.

In 15-16th centuries the average distance between points of delivery in the principality of Moscow would have been 45 to 110 kilometers. When letters were sent from Moscow to Europe, it would take a month just to reach the inside of our own borders. A regular postal service that every civilian could make use of would only be set up in the 19th century, with parcels leaving the office twice a week 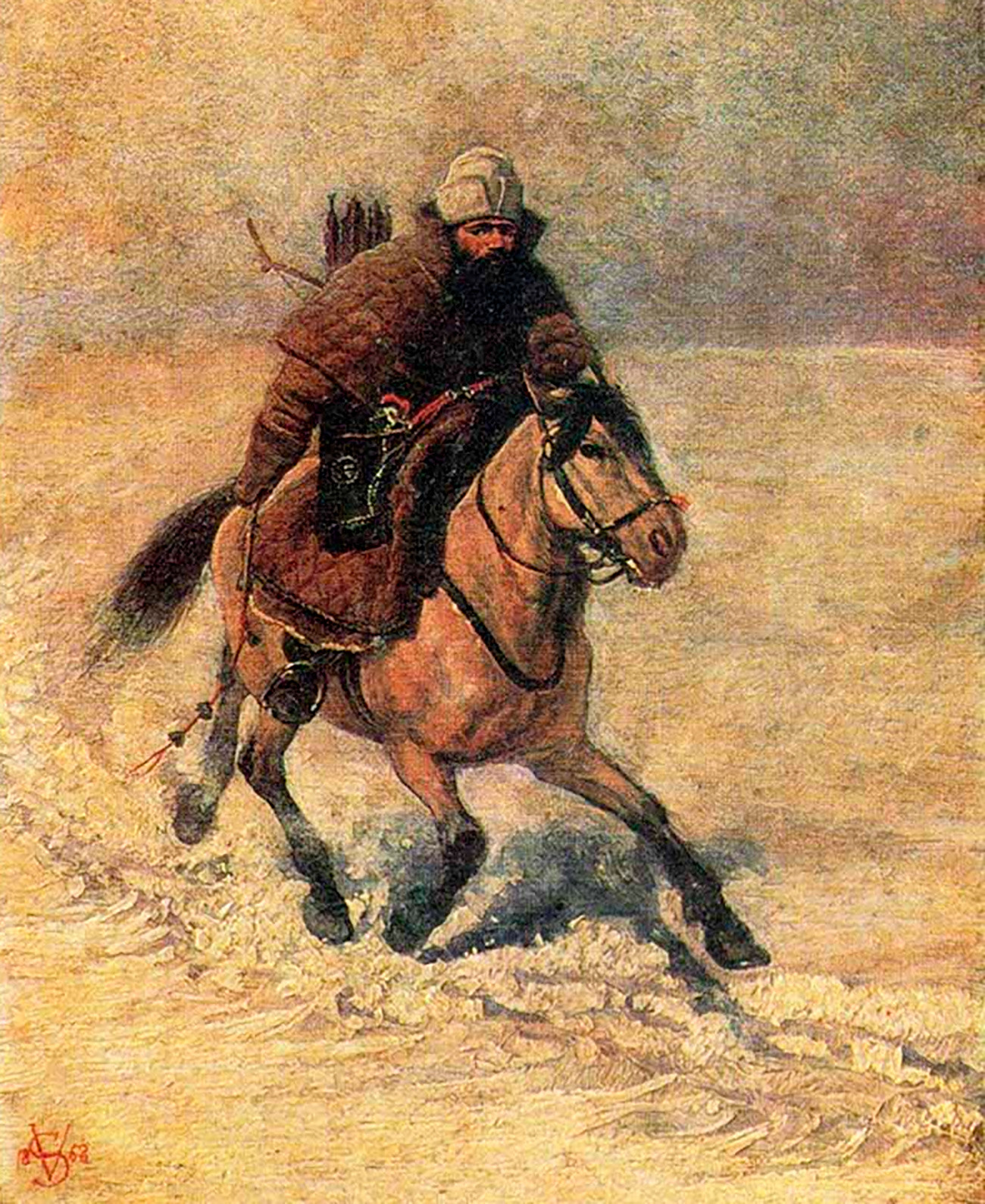 Messenger of the 16th century

the first quarter of the century, getting from Moscow to St. Petersburg would have taken you at least two days - and a total of six days, if you traveled using a slow carriage, which you could hire at the post office. The horses would travel between 110 and 160 kilometers daily at a speed of 12-15 km/ and required rest periods. By then the country had already spanned a territory from Khabarovsk all the way to European borders. In 1805, the Count Fedor Tolstoy, on a trip back from the Far East to St. Petersburg, had had to traverse it both on foot and on horseback. That journey took him an entire year 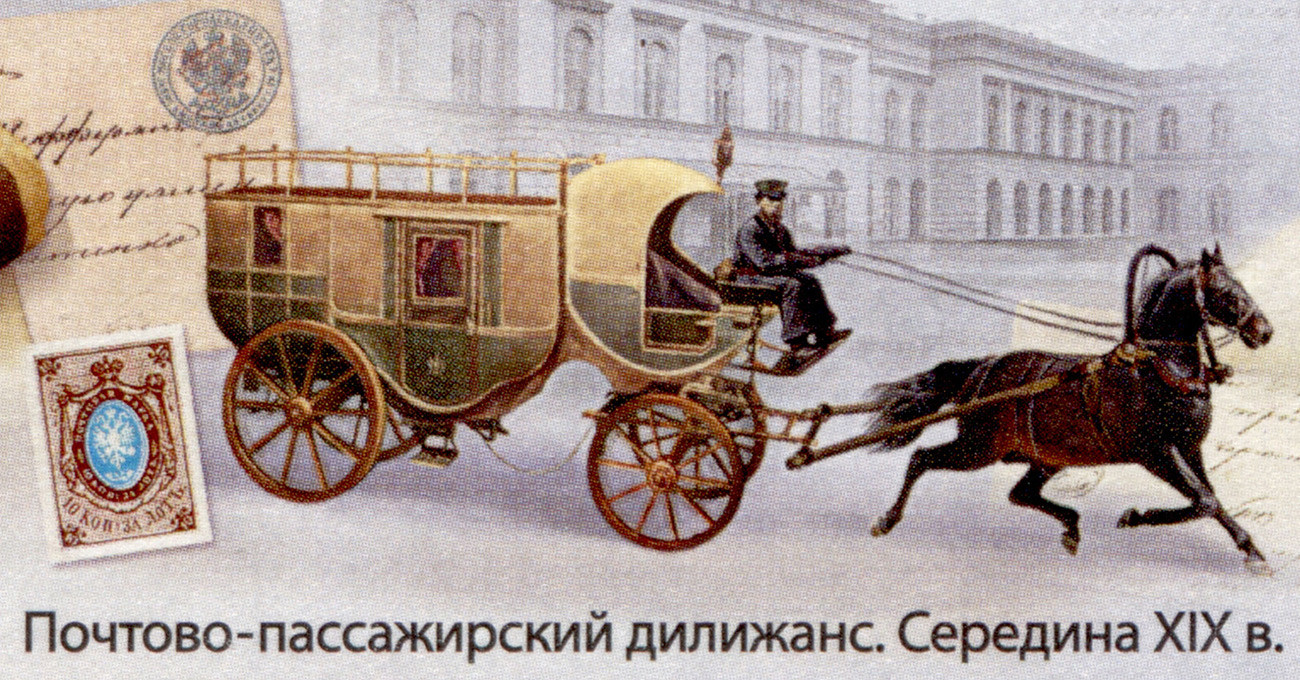 , what does the state system have to do with all that? Well, when you have a situation where a word (that includes official decrees) from the center takes a whole year to reach the country's extremities, one would have to install deputies to rule over the various faraway regions. When these persons took power, they would effectively embody the government, carrying out the rule of law according to tsarist decrees. However, you can imagine that they’d also take huge liberties, all of which depended on who they were as people - their own moral principles.

A deficit of honest governors 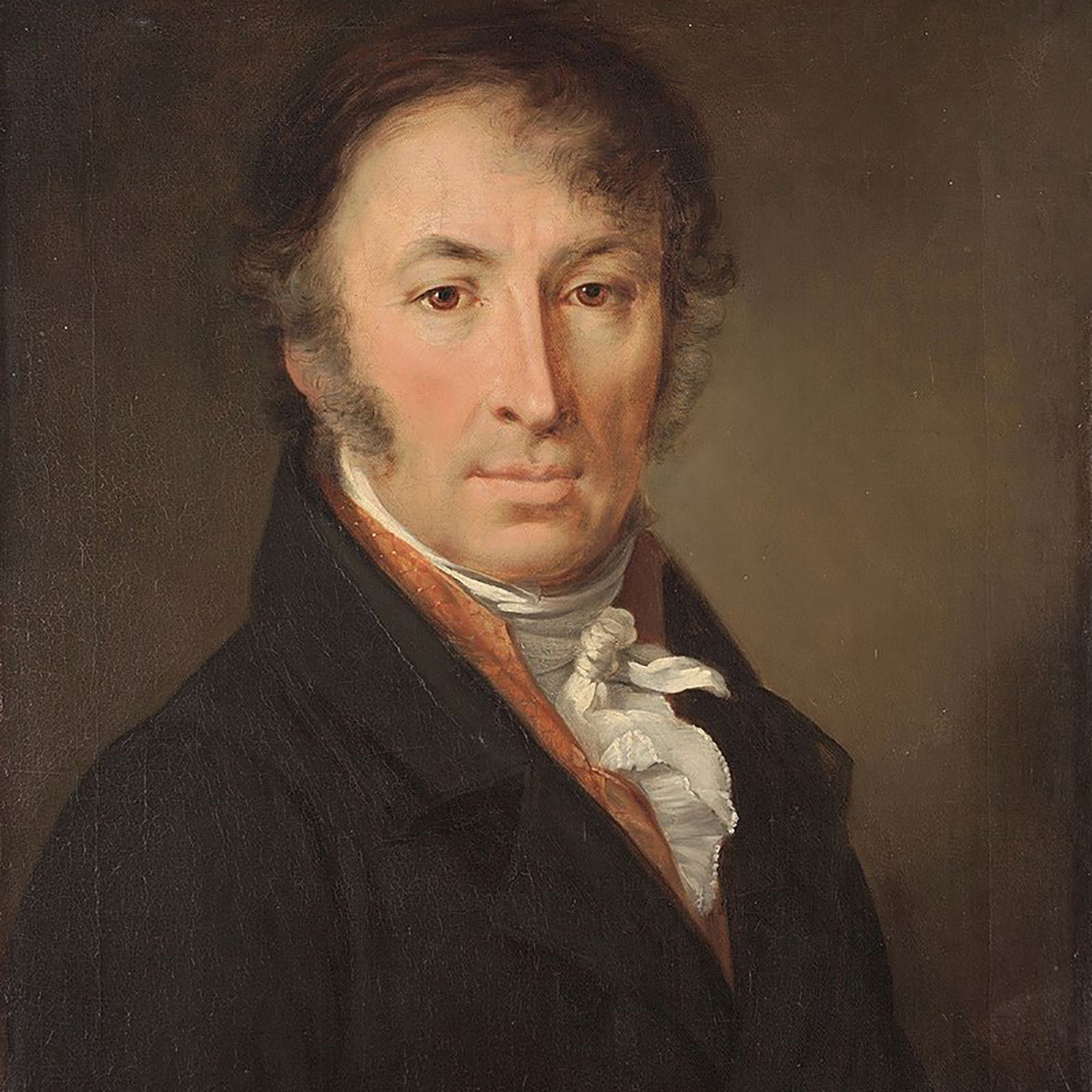 Historian and civil servant Nikolay Karamzin was of the opinion that the nature of governors lay at the heart of the success of Russian governance: “install 50 honest governors, and progress will happen,” he said. When comparing the Russian state system to other countries’, one should not forget size: our country is 26 times the area of France, and 47 times that of Germany - and those are the ‘big’ ones!

Some believe that comparing the size of one’s country to others is somehow uncultured, but there’s a sense in considering just how much more difficult the task of governing is made by size. Widespread reform, for example, is next to impossible to implement. 1861 saw the abolishment of serfdom… officially. It would be another 20 whole years before the same started happening in Irkutsk, in Siberia. That’s how long change took to make its way from one part of the country to the next. 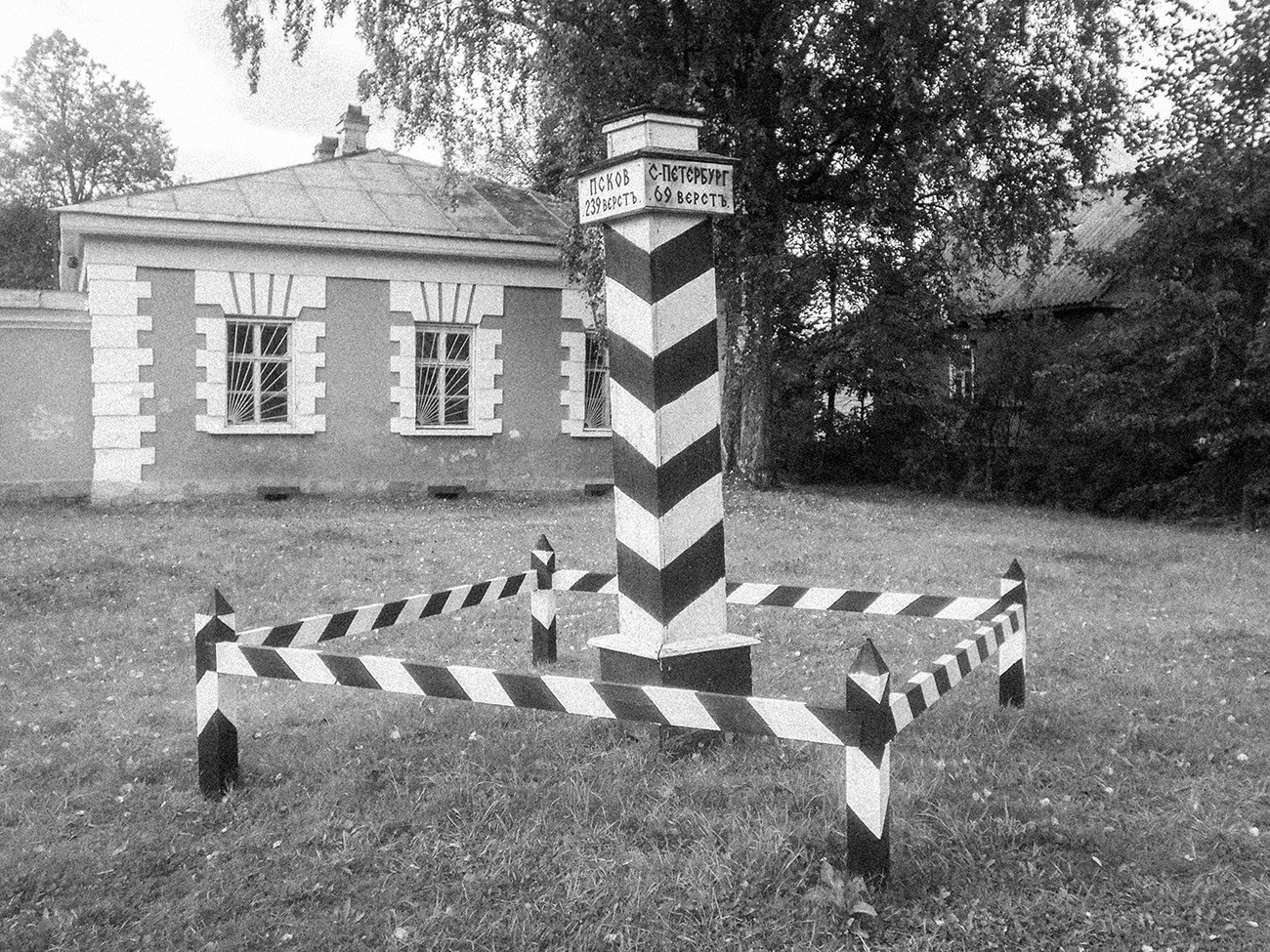 Size and distances are also invariably tied to criminality. It’s easy to get lost in Russia, to disappear. There are to this day places where there isn’t a soul to be seen for hundreds of miles. Crossing the country by train will take you a week. It’s a paradise for criminals. Those who abide by the law always tend to live in or near a populated area. Lonely ‘khutors’ or separate houses in the wilderness are more an exception than the rule: you could either be attacked by a gang or mauled by a bear - take your pick 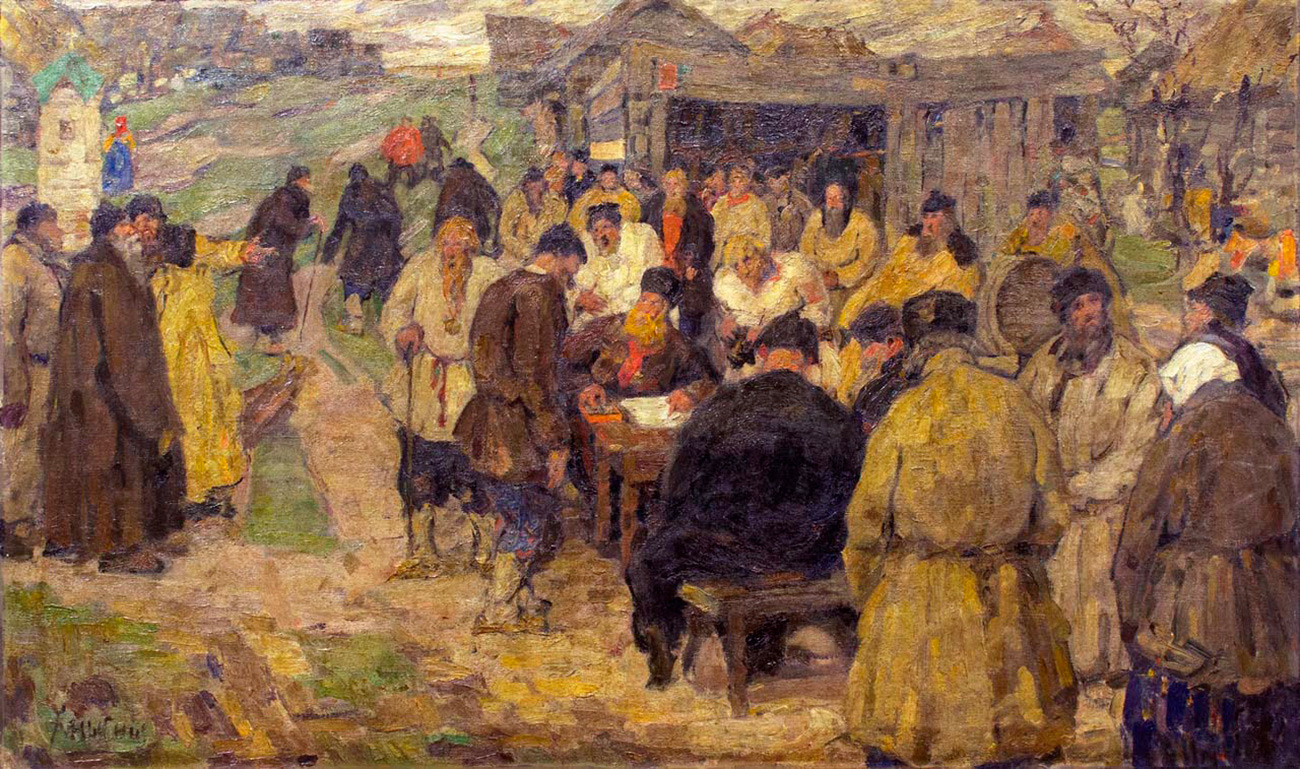 peasants would also have found it very difficult to tend to their livelihood living separately from a group - collecting the harvest is best done when you’re part of an ‘obschina’ (commune). That communal spirit permeated all life. But that didn’t stop at the peasant level: Russian nobility was just as bound by communal ties and mutual help and cooperation.

It turns out then, that geography in Russia has become a reason for both a sense of togetherness among its people, as well as promoting centralization of power. And what of individualism? What about the Russian individual’s striving for self-sufficiency, which he demonstrably wears on his sleeve? Well, that’s because deep inside, we are group-oriented and love communal life and friendly cooperation, while that projected striving for seeming independence of spirit is there to compensate for that.