Six wars and conflicts when Russia and UK acted as allies 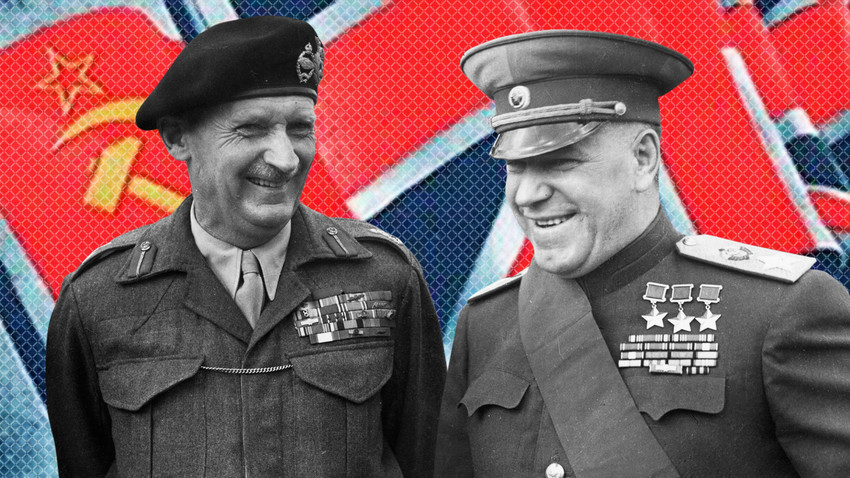 Getty Images
The history of Russian-British relations is not only one of confrontation. Both countries stood together in two world wars, and for almost 20 years jointly fought Napoleon and revolutionary France. 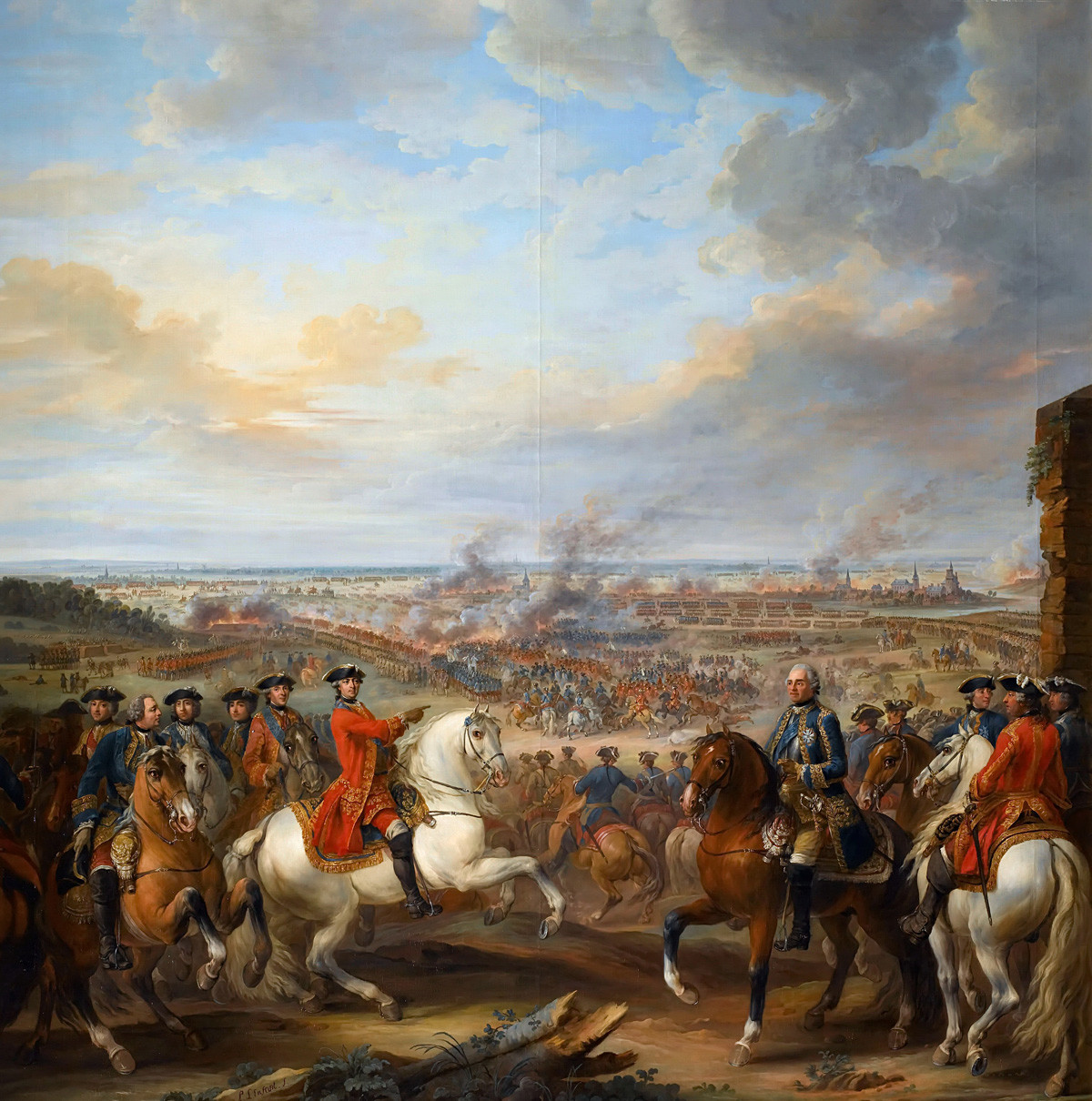 When in the mid-18th century, France, Prussia and Spain decided to bite huge chunks out of the vast Habsburg Empire, neither Great Britain, nor Russia could stay away and allow Paris and Berlin to strengthen their positions.

While the British concentrated on France, the Russian armies confronted the troops of the Prussian king, Frederick the Great. However, at the end of the conflict, in 1747, London and St. Petersburg signed a convention according to which 37,000 Russian troops were sent to the Rhineland to fight the French.

Russian and British military involvement helped the Habsburgs to preserve the general status quo in Europe. Despite some territorial losses, they kept most of their lands and didn’t allow Prussia and France to significantly expand. This was more than welcomed by Russia and Great Britain. 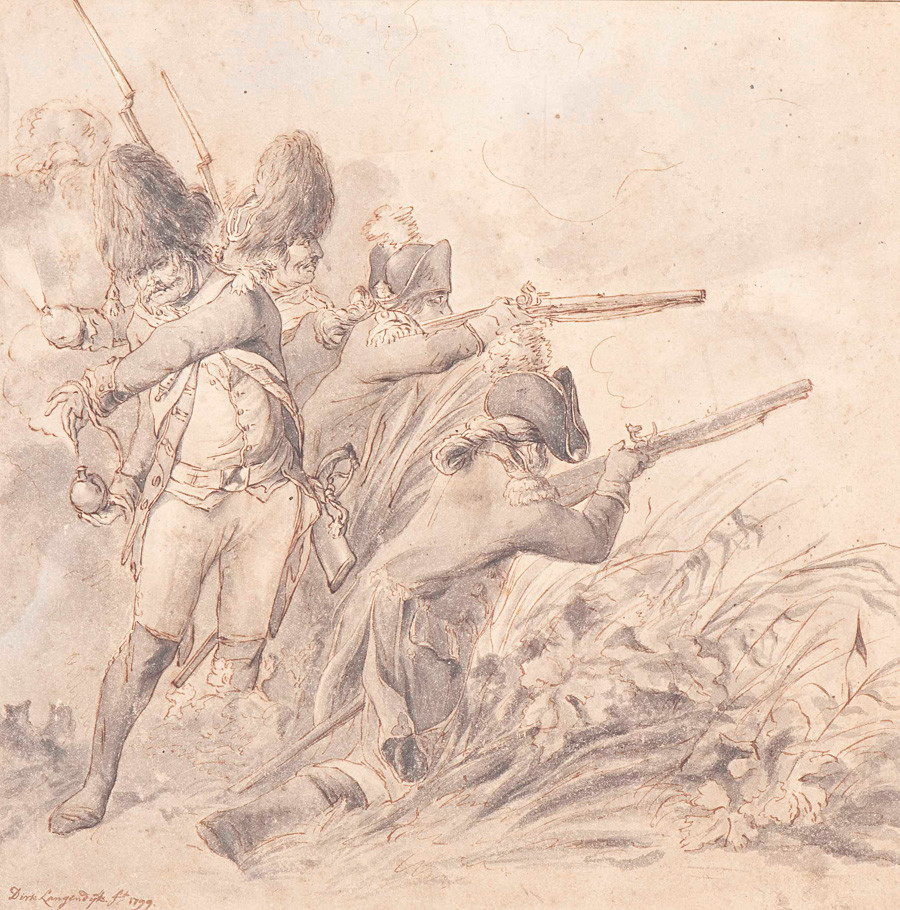 For almost two decades the Russian and British empires fought together to destroy revolutionary France and prevent its “infectious” ideas from spreading to their states. However, there were pauses in this cooperation, when the two powers switched from allied cooperation to conflict (1800-1801), and even to war (1807–1812).

Troops of both countries seldom acted jointly. While Russia waged war against the French in Germany, Italy and on its own soil, the British mainly fought Napoleon’s armies in Spain and Portugal.

The largest joint Anglo-Russian operation of these wars happened in 1799 in French-occupied Holland. A British-Russian expeditionary force was defeated by the troops of France and their puppet Batavian Republic, and forced to evacuate. For the British, however, the operation wasn’t a complete disaster, since they managed to capture most of the Batavian fleet. 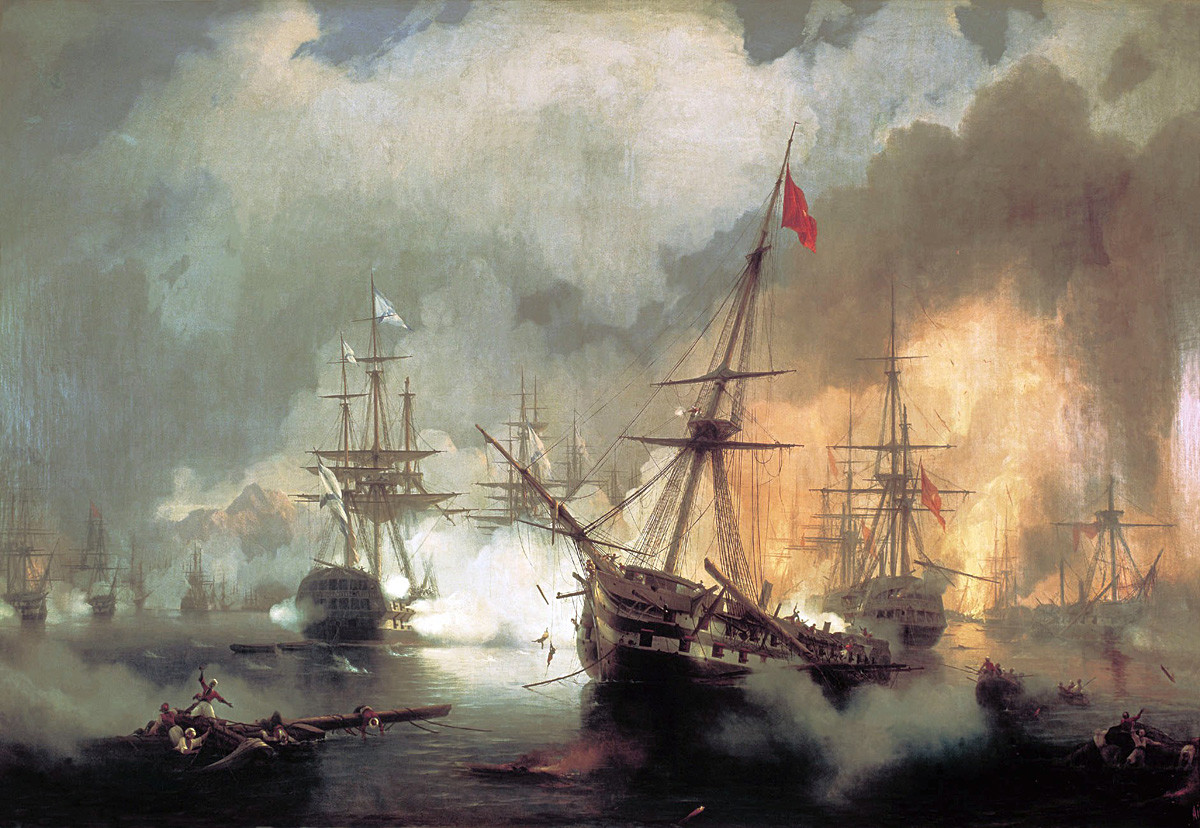 Russians at Battle of Navarino Date 1846 by Ivan Aivazovsky

For six years the European powers observed how the Greeks bravely and desperately fought for their independence from the Ottoman Empire. Morally and diplomatically supporting the rebels, they didn’t get involved in the conflict.

However, when by 1826 the Ottomans with the aid of their Egyptian vassals had occupied most of the Greeks’ territory and put their revolution on the brink of collapse, Russia, France and Great Britain intervened.

At the naval Battle of Navarino on Oct. 20, 1827, the joint Russian-British-French fleet completely destroyed the Ottoman-Egyptian forces, which lost over 60 ships. This victory significantly helped the Greeks to celebrate their freedom three years later. 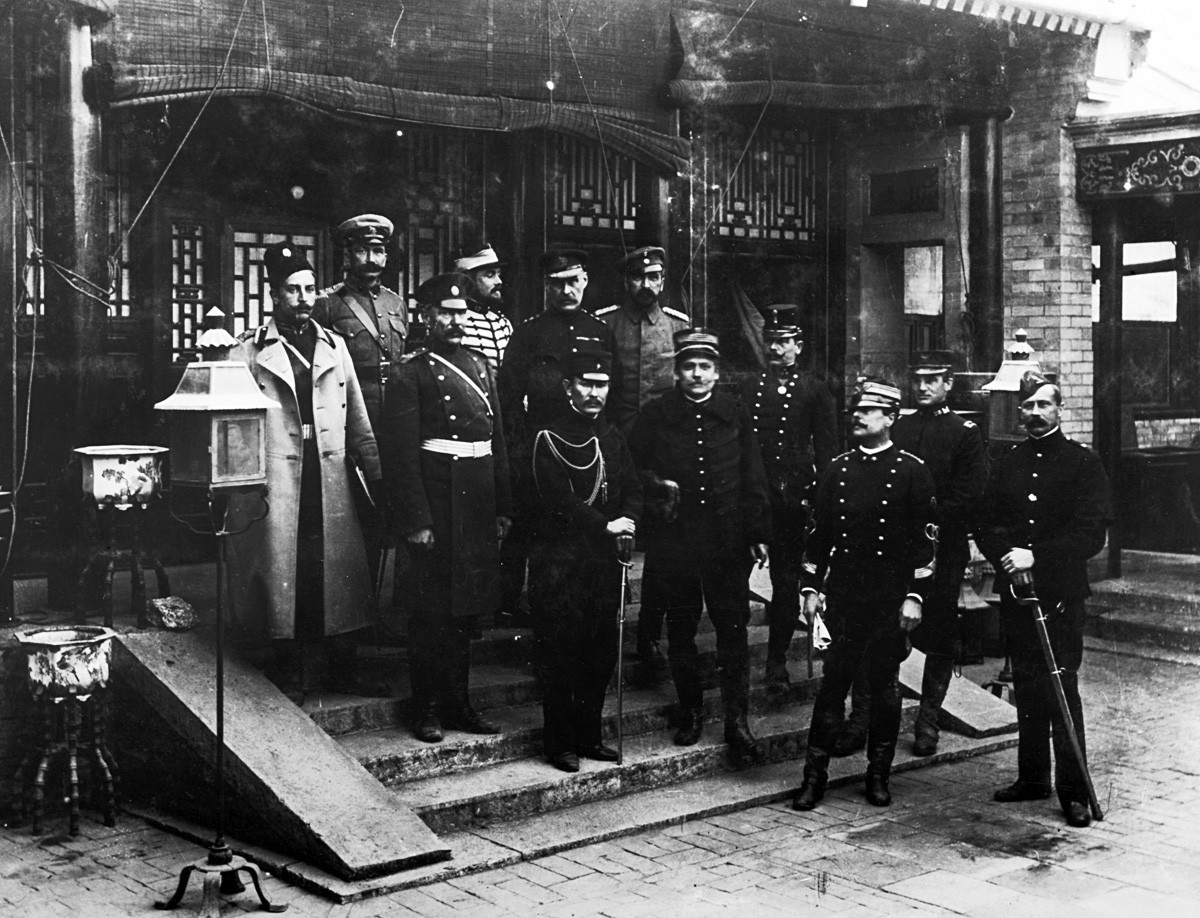 Representatives of the German, British, French, Italian, American and Russian military forces who combined to defeat the Boxer Rebellion in China, in Beijing (Peking)

In the late 19th century, China was going through a rough patch. Technically and economically lagging behind the Great Powers, it was duly turned by the latter into a semi-colony.

As a response, the Boxer Rebellion was launched. This mass uprising, aimed against foreign intervention, went hand in hand with the brutal killings of Europeans and Christians, and the burning of churches and embassies.

To save the situation the Great Powers formed the so-called Eight-Nation Alliance, which, beside Great Britain and Russia, included Germany, Japan, the USA, Italy, Austro-Hungary and France. The allies crushed the rebellion, dragging China into an even more desperate and dependent condition. 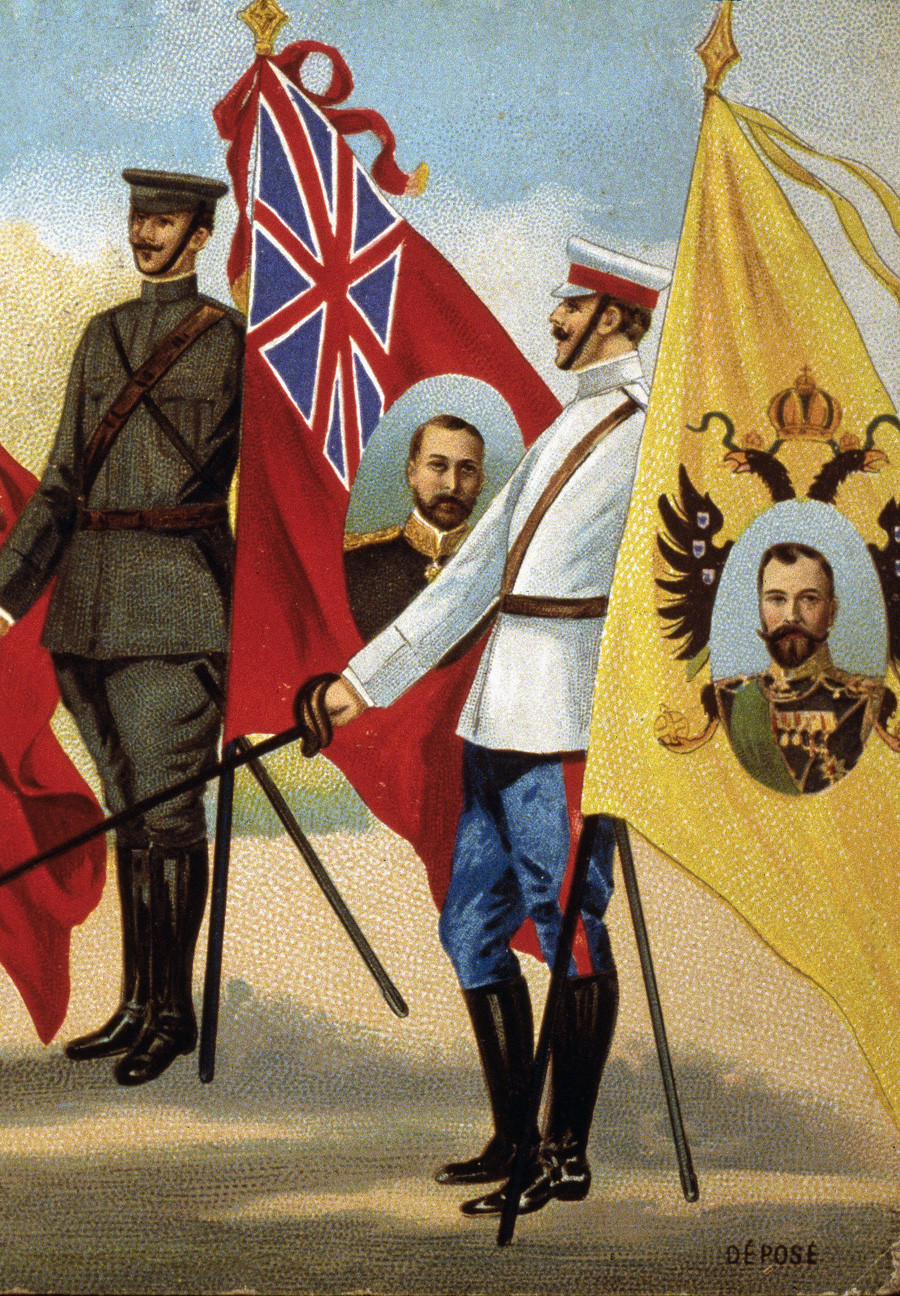 In the early 20th century, Russia, France and Great Britain overcame (or at least tried) their disagreements to jointly oppose the growing strength of the Triple Alliance between Germany, Austro-Hungary and Italy.

The Triple Entente was not initially formed as an alliance of mutual defense, but rather as an association of states which shared the same vector of foreign policy. During WWI, however, it became a powerful military union of over 20 countries.

Its unsuccessful intervention in Russia and failed support of the White movement against the Soviets was the Entente’s last major action, after which it was soon dissolved. France and Great Britain kept their allied relations, but this time without Russia. 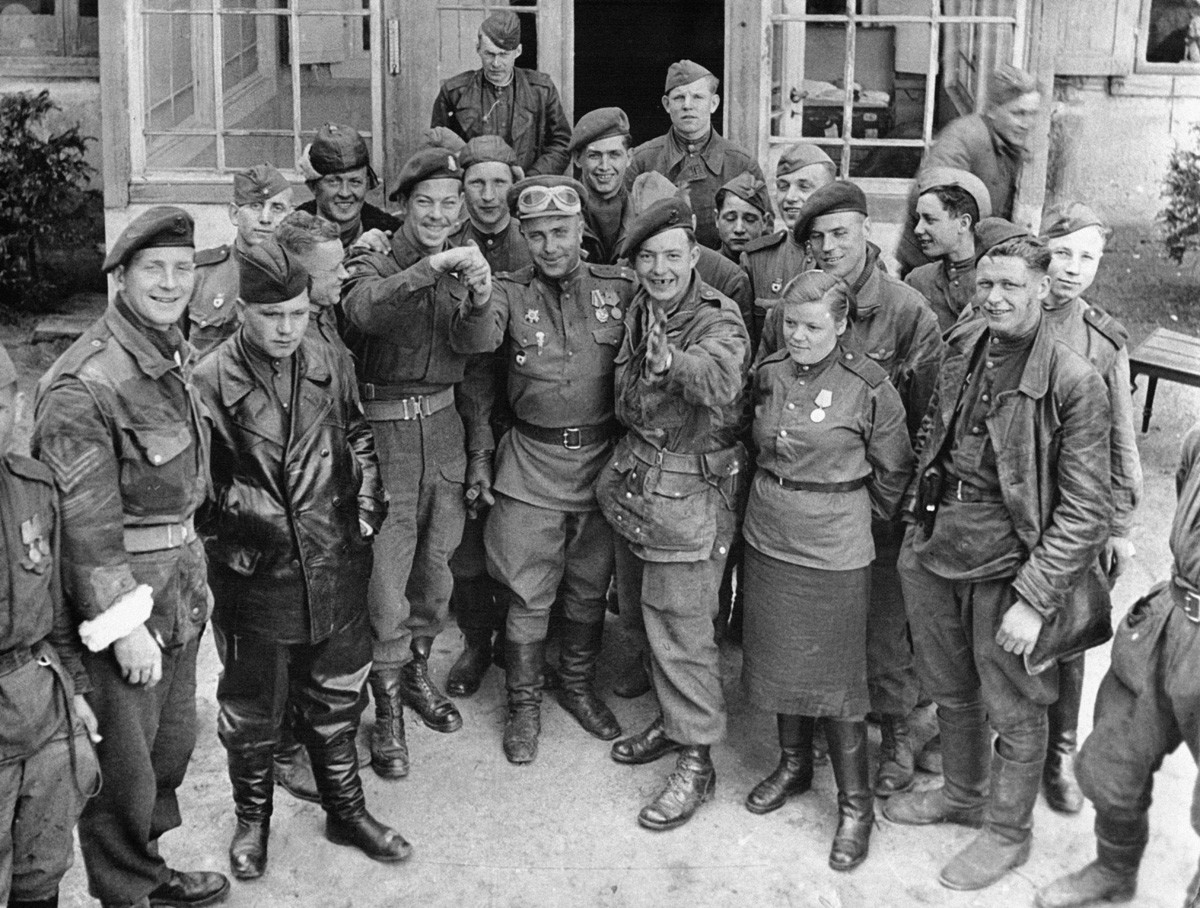 Soviet and British troops near Wismar on 3 May, 1945

On June 22, 1941, the same day that Nazi Germany launched Operation Barbarossa against the Soviet Union, the British leader Winston Churchill made a speech, promising Russia and the Russian people “any technical or economic assistance” which was is in Britain’s power and could be of service to them.

The frosty pre-war relations between the two countries changed to deep cooperation, which lasted for four years. Great Britain actively aided the Soviet Union via the lend-lease program. The two countries jointly occupied pro-German Iran in 1941, and effectively fought the Kriegsmarine and the Luftwaffe in the Arctic Ocean.

On May 3, 1945, near Wismar, the USSR and the UK organized their own “Elbe Day,” when the British Second Army established contact with the Soviet 3rd Guards Tank Corps. Soon after WWII, relations between the two countries quickly worsened, ushering in the Cold War era.