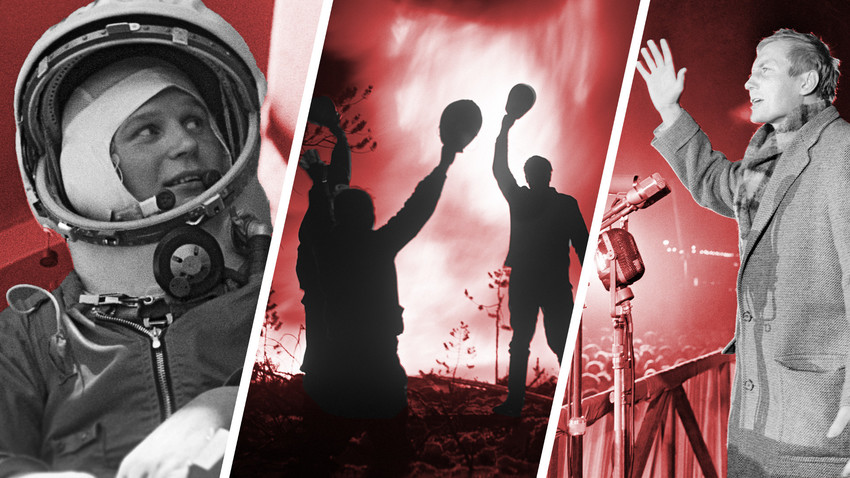 Sputnik, Oleg Ivanov/TASS, Sergei Lidov/Sputnik
In the 1960s the Soviets first sniffed the air of mild liberalization in the country, they sent the first man and woman into outer space and almost started a global nuclear war with the U.S. 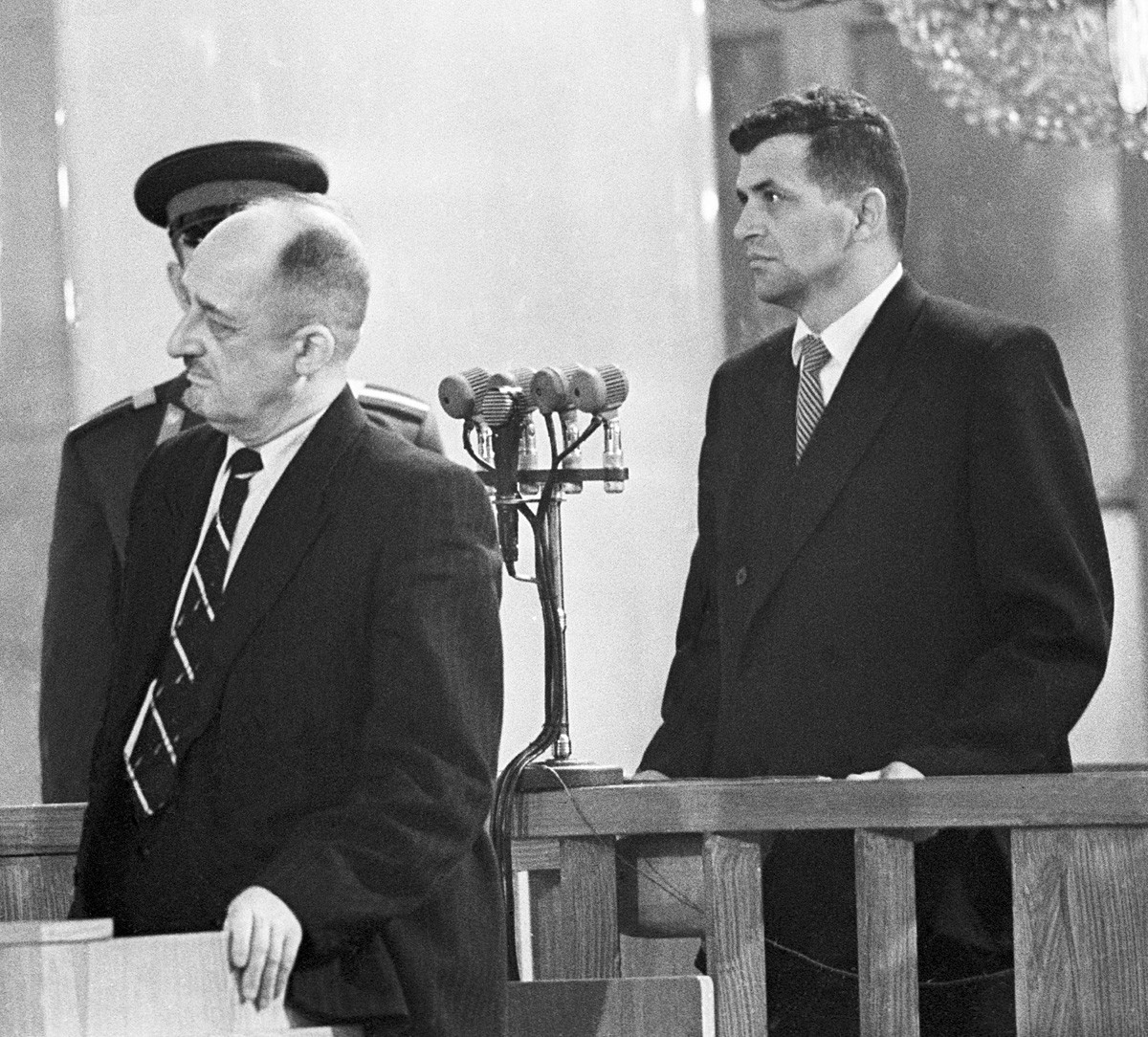 American pilot Francis Gary Powers (R) hears out the verdict of the Military Board of the USSR Supreme Court on August 19, 1960 during an open session in the Pillar Hall of the House of the Unions.

On May 1, 1960, Soviet Air Defense Forces shot down the U.S. U-2 reconnaissance plane over the Urals. Pilot Gary Powers was taken prisoner, and was sentenced for spying, but he was soon released after a prisoner exchange with the Soviet intelligence officer, Rudolf Abel. 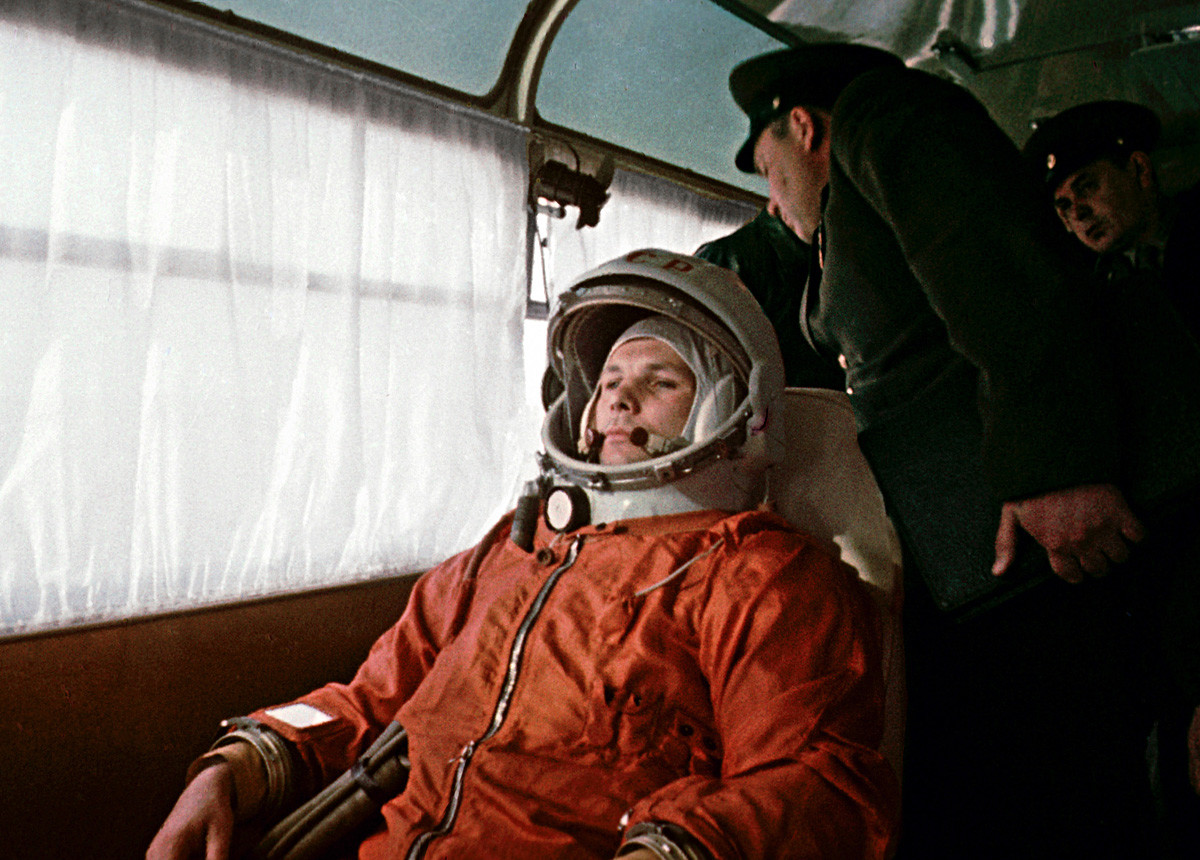 On April 12, 1961, Soviet cosmonaut Yuri Gagarin, riding on the Vostok space capsule, became the first human to cross into outer space. His flight lasted 108 minutes, from launch to landing. 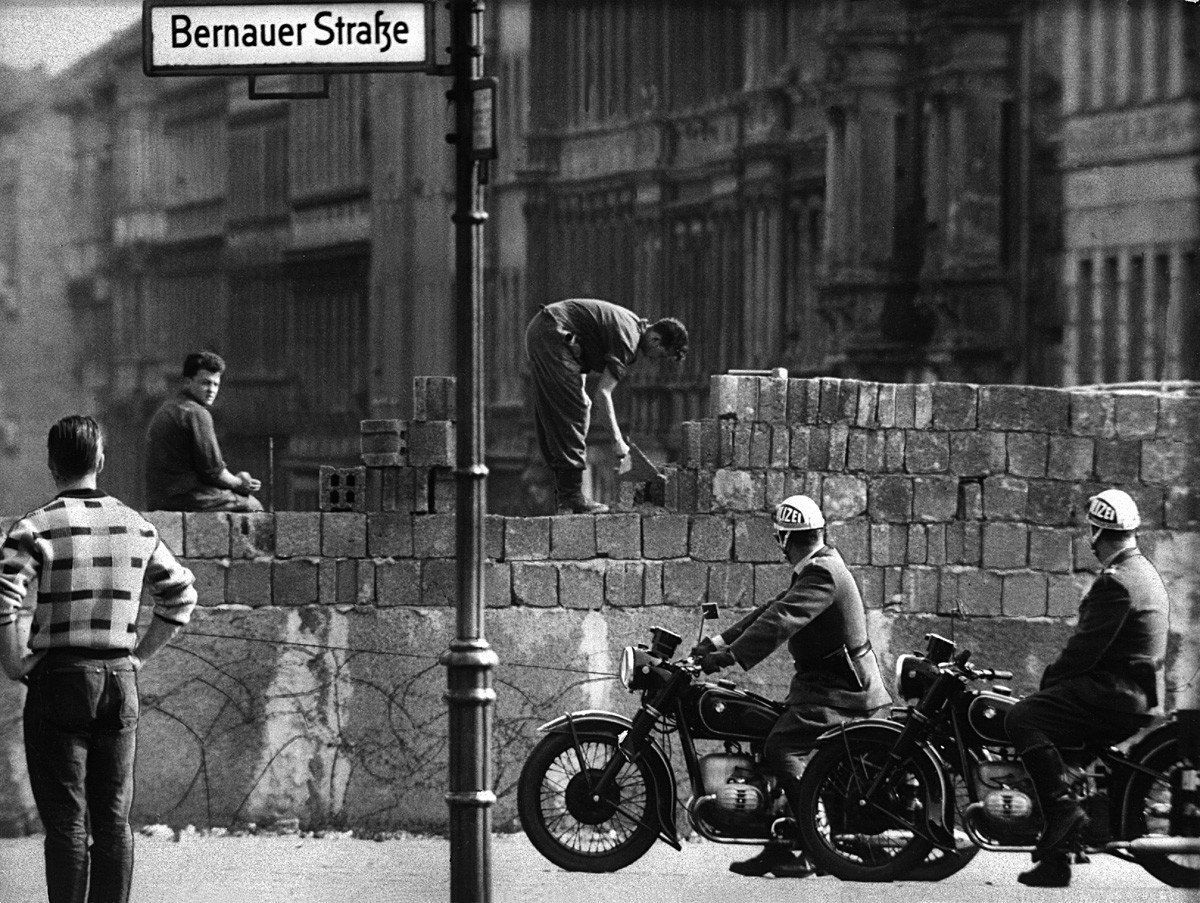 Police officers on a motorbike watch workers lay bricks on the other side of the so-called Berlin Wall in the street Bernauer Strasse in Berlin, Germany. On the morning of August 13, 1961,

To keep Western “fascists” from entering East Germany, the German Democratic Republic, with Moscow’s blessing, began construction of the famous (infamous) Berlin Wall. The first stone was laid on August 13, 1961, and for 28 years it physically and ideologically divided the city. 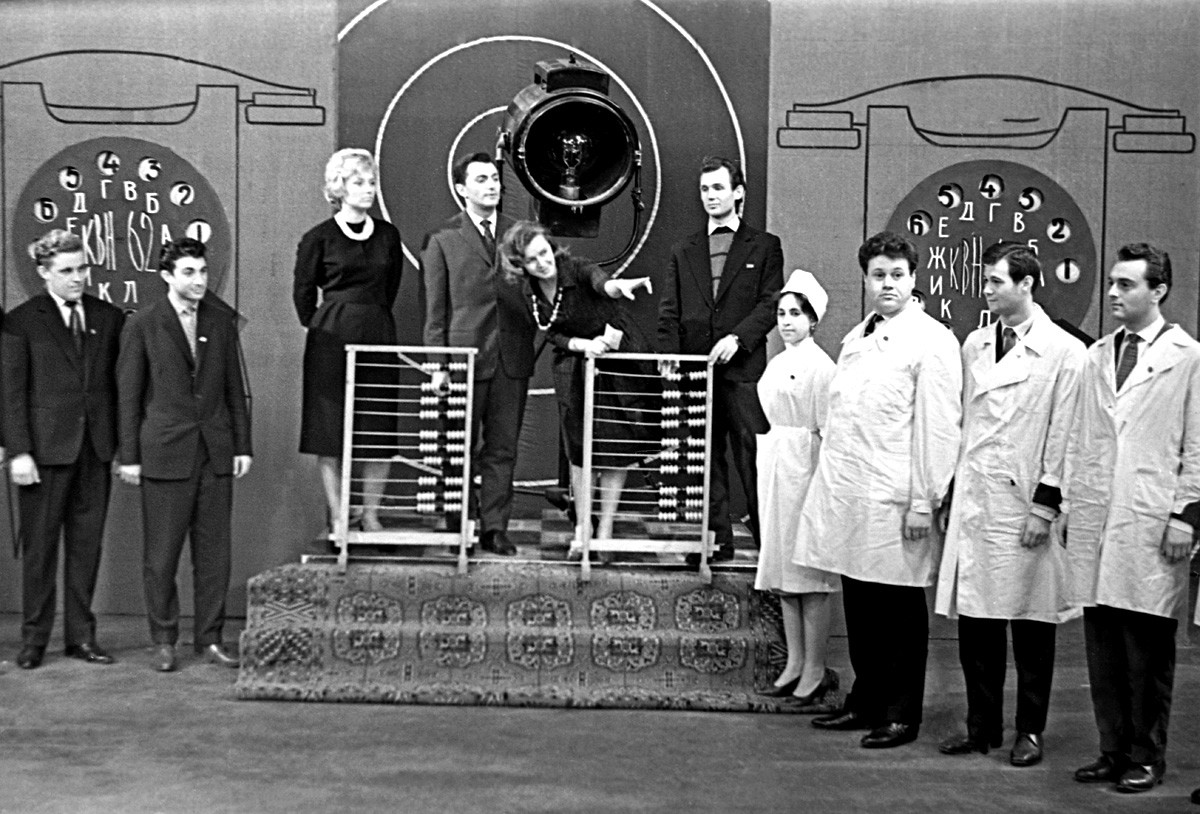 The KVN humour TV show is filmed at the Central Television Studio at Shabolovka.

In 1961, one of the most popular Soviet TV shows - the student humour competition, KVN (“Club of the Funny and Inventive People") - was launched. Today, it’s an extremely profitable commercial project, and successfully continues to entertain audiences in Russia. 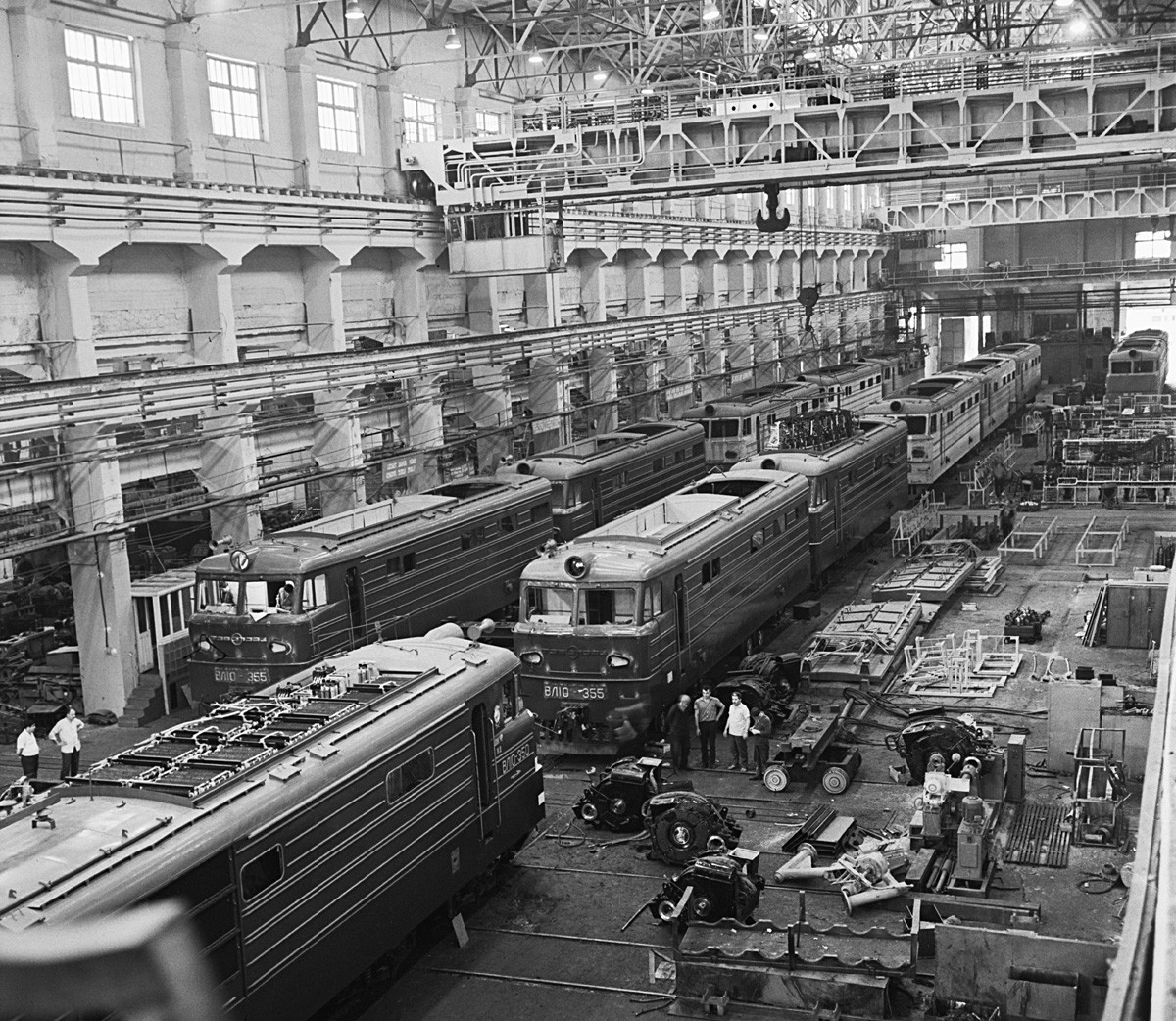 Assembly of the VL10 electric locomotives in Novocherkassk.

Over 5,000 people, mainly workers at the local electric locomotive plant, gathered in the southern city of Novocherkassk on June 1, 1962, in order to protest a significant deterioration in labor conditions. Failing to stop the crowd heading towards the city administration with two warning volleys, the police opened direct fire on the crowd, killing 26 and injuring 87. 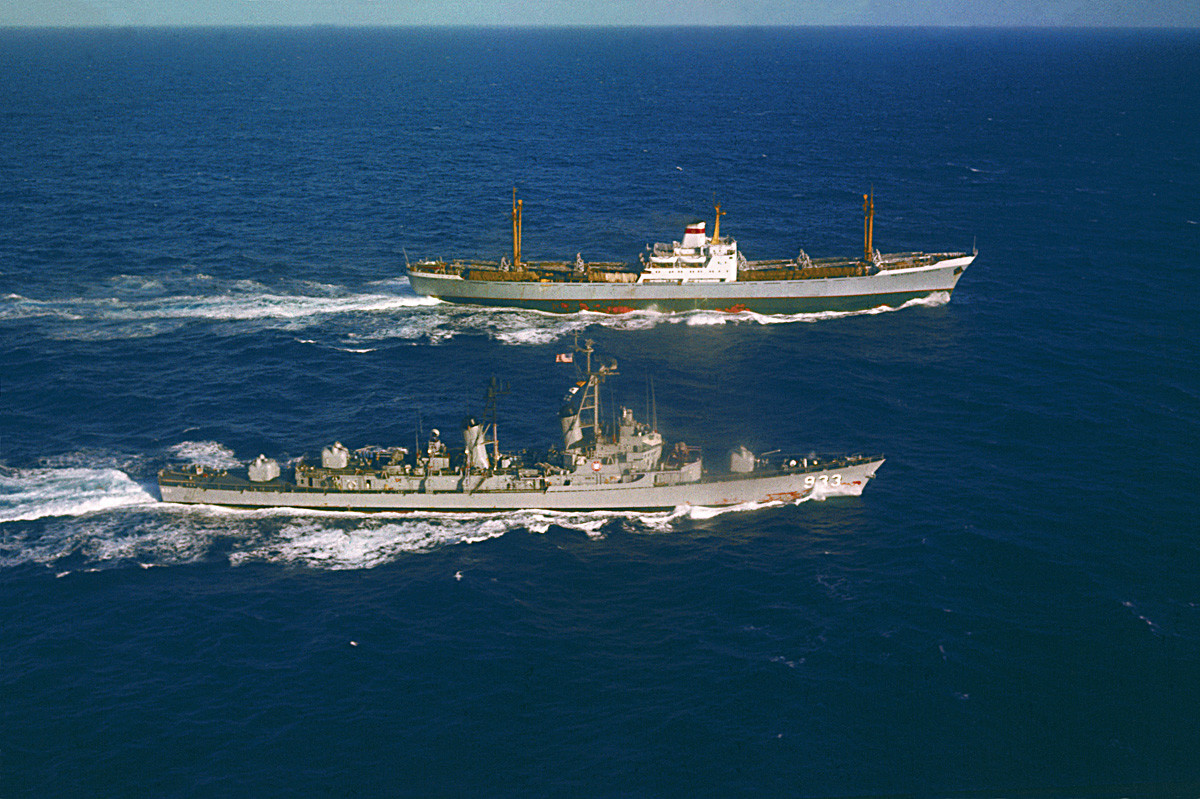 The USS Barry (left) steams alongside the Soviet freighter Ansov, outbound from Cuba, for an inspection of her cargo early today.

When the U.S. placed Jupiter ballistic missiles in Turkey, the Soviets saw this as a major threat, and as a response they sent a contingent of over 50,000 soldiers and nuclear weapons to Cuba, their new communist ally. Only close and intense last-minute cooperation between Nikita Khrushchev and John Kennedy in October 1962 averted a nuclear conflict. 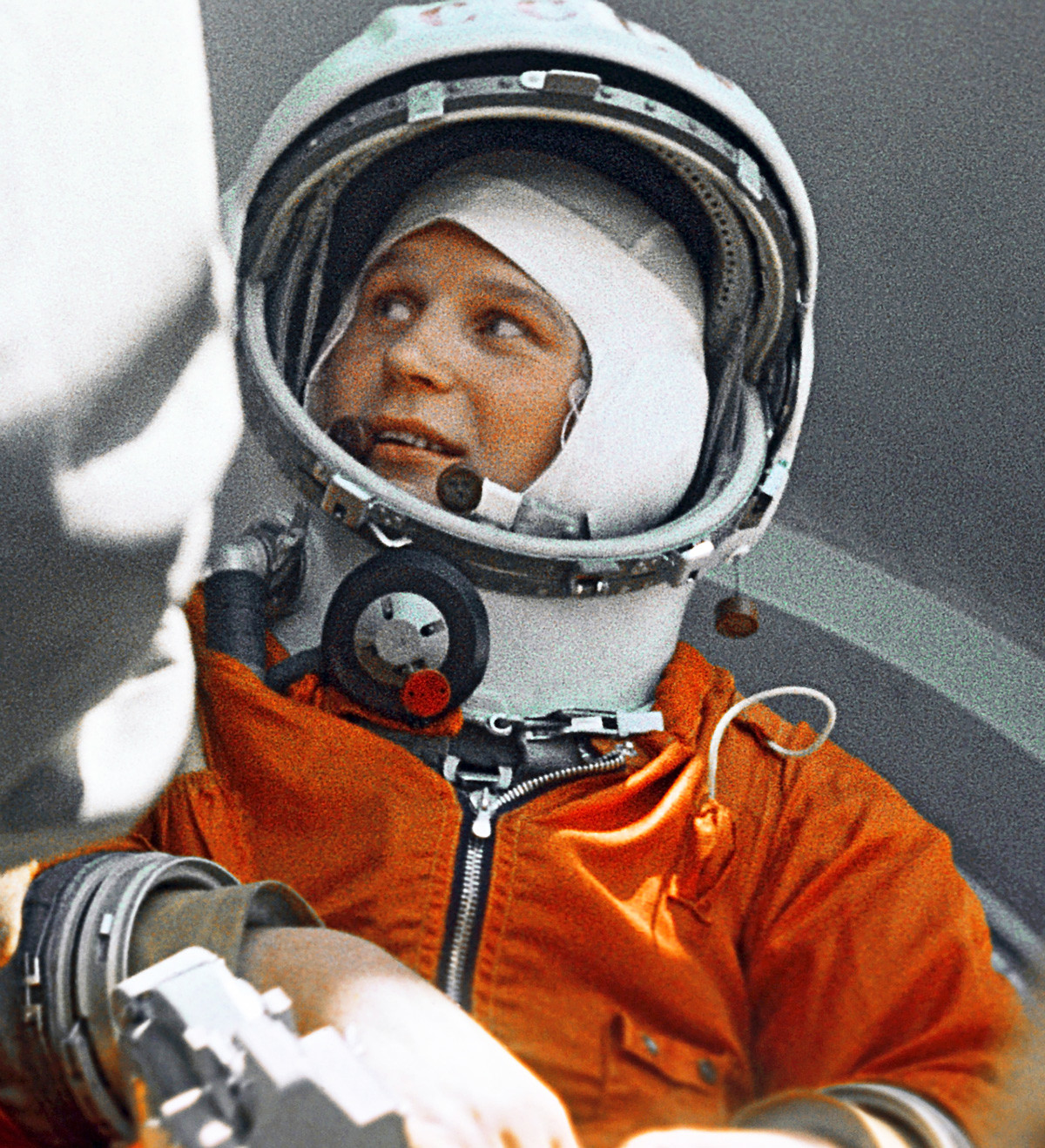 Cosmonaut Valentina Tereshkova before her space flight on June 16, 1963.

On June 16, 1963, Valentina Tereshkova became the first woman to go into outer space. She spent almost three days in orbit, going around the Earth 48 times in her Vostok 6 space capsule. 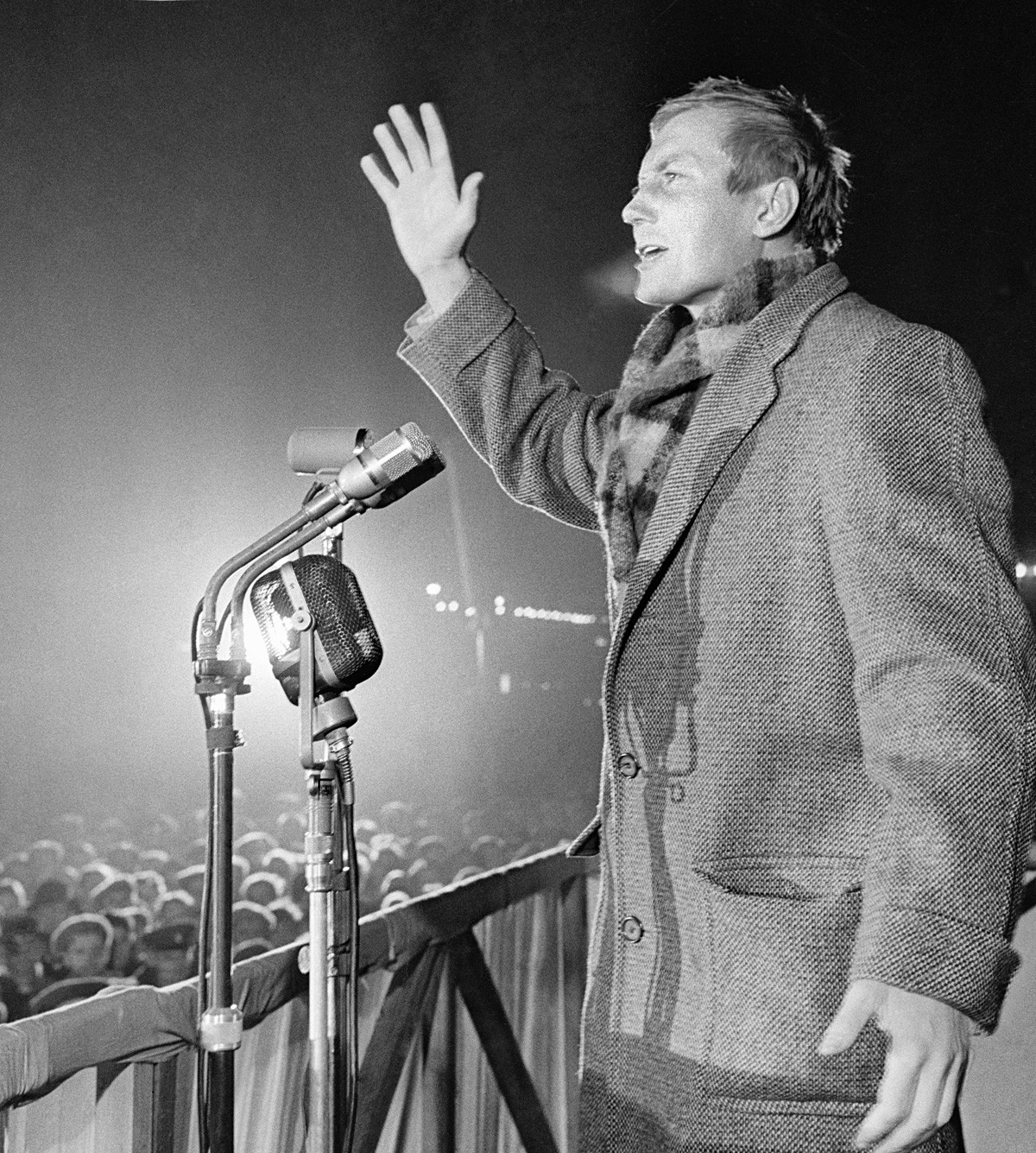 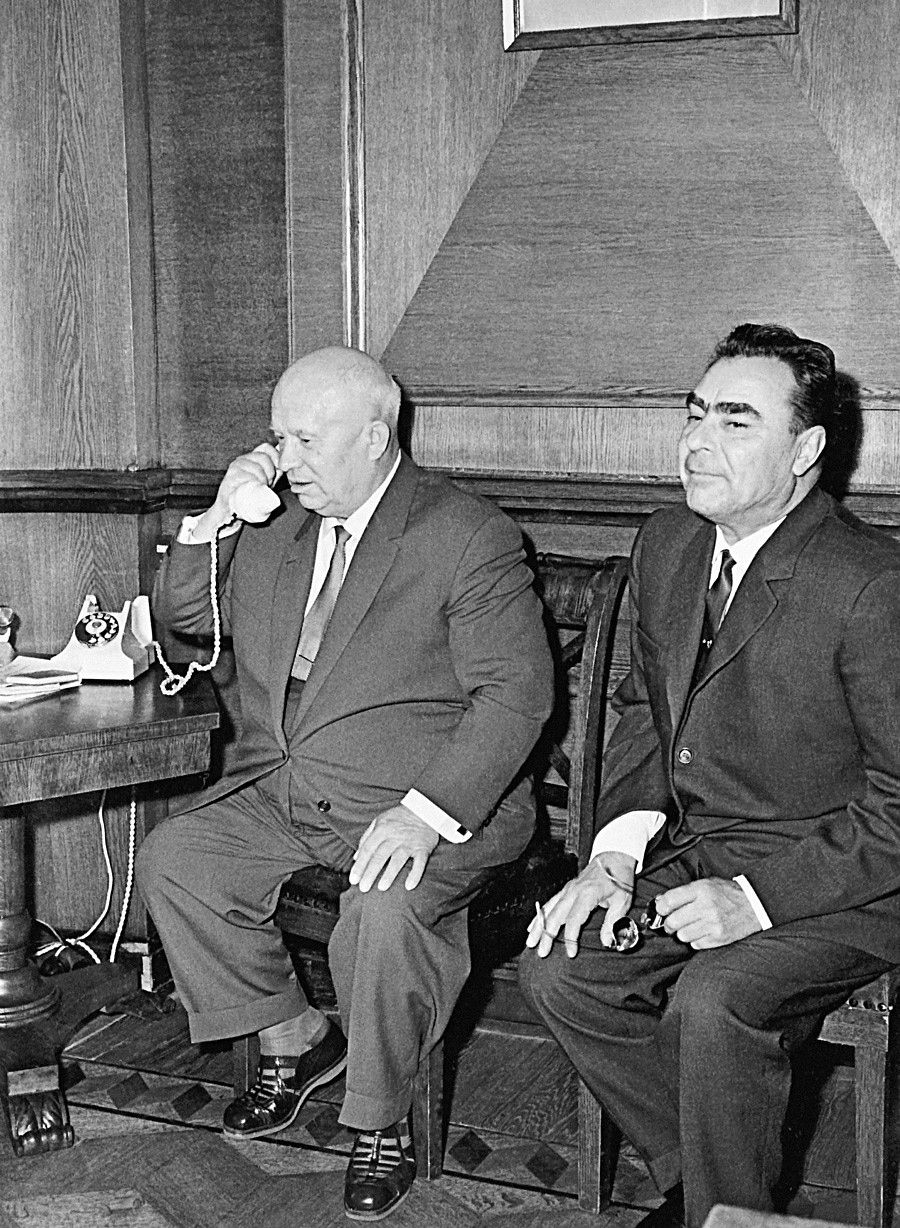 On October 14, 1964, a group of high-ranking officials organized the removal of Nikita Khruschev from power for reasons of "advanced age and ill health". This happened while he was on vacation in Georgia, and Khruschev decided not to put up a fight. Leonid Brezhnev became the new General Secretary of the Communist Party. 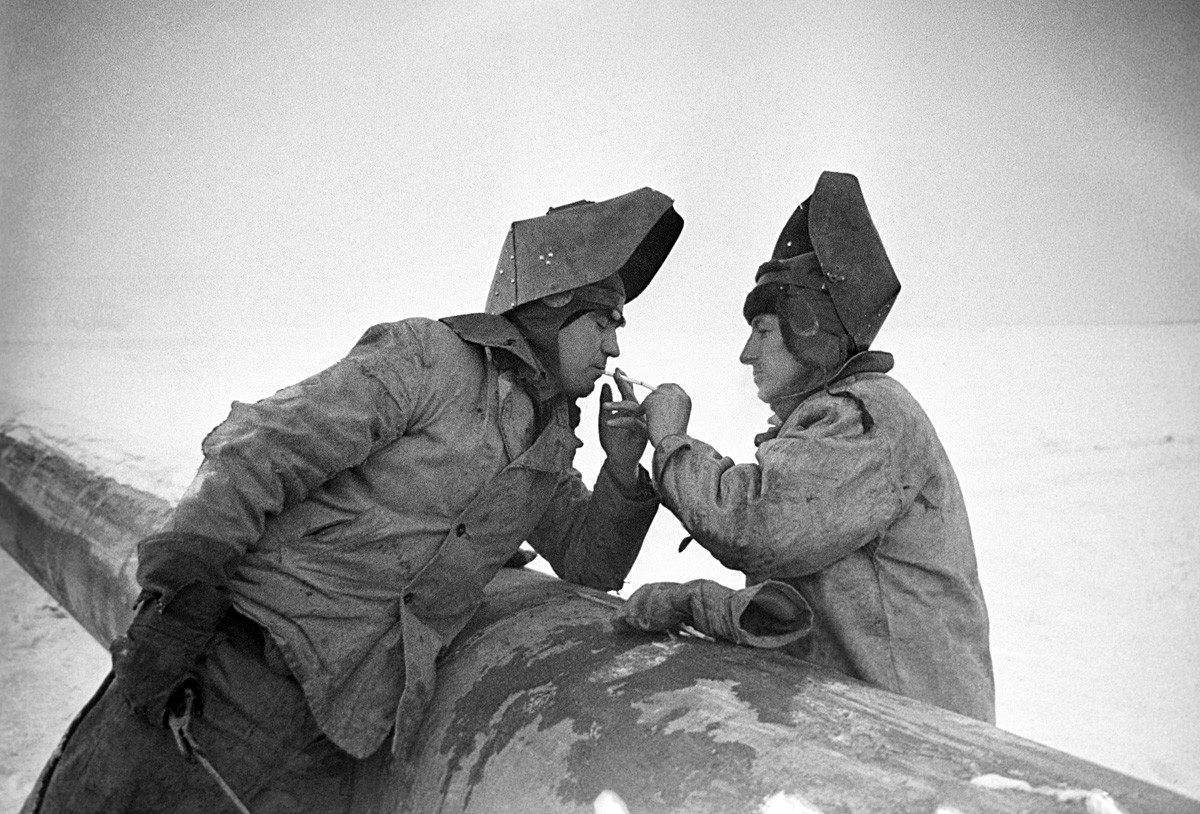 Electric welders smoking during a break during the construction of the second 320-km long chain of the “Druzhba” pipeline.

On October 15, 1964, the world's longest oil pipeline was launched. Almost 6,000 km long, the Druzhba (Friendship) pipeline started in the eastern part of European Russia and ended in Poland and the German Democratic Republic. The network was improved and enlarged in the years to follow, and remains in use today. 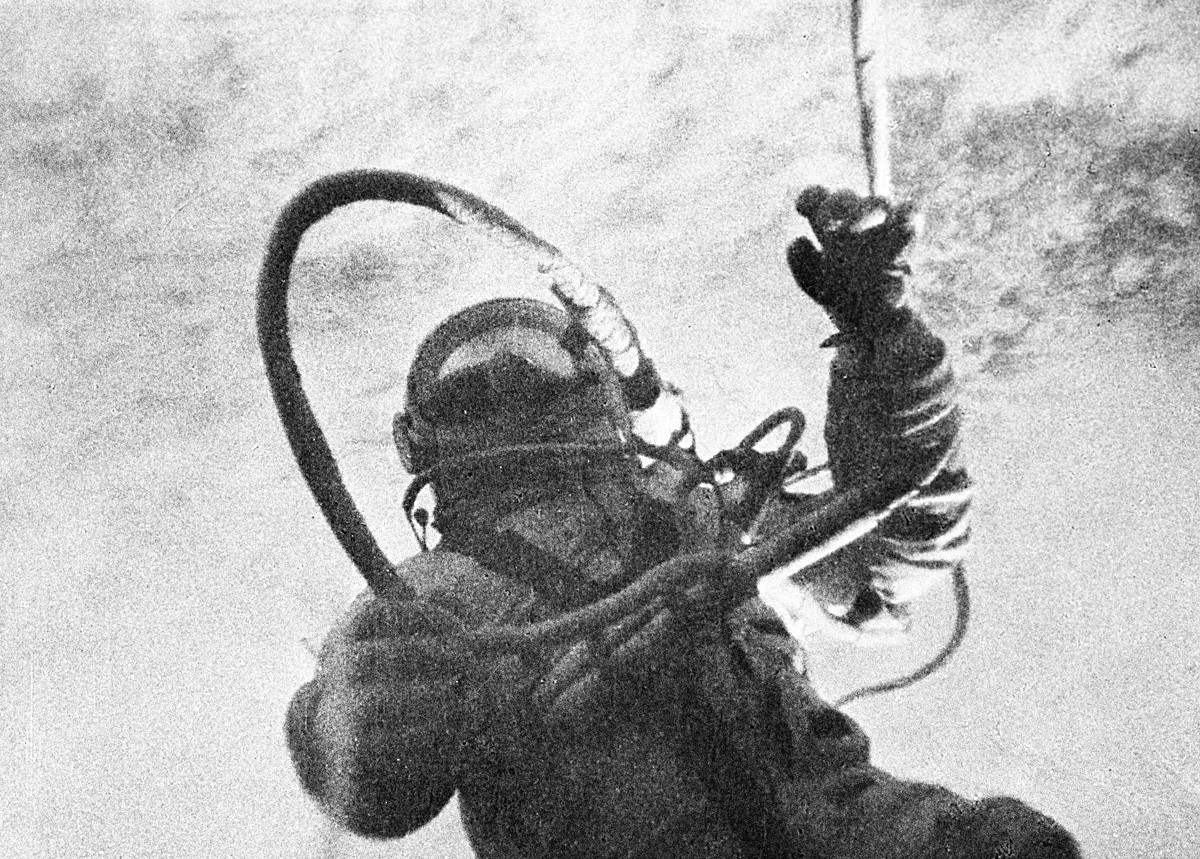 On March 18, 1965, Soviet cosmonaut Alexey Leonov became the first human in history to conduct a spacewalk. He exited the capsule during the Voskhod 2 mission, and spent 12 minutes in outer space. 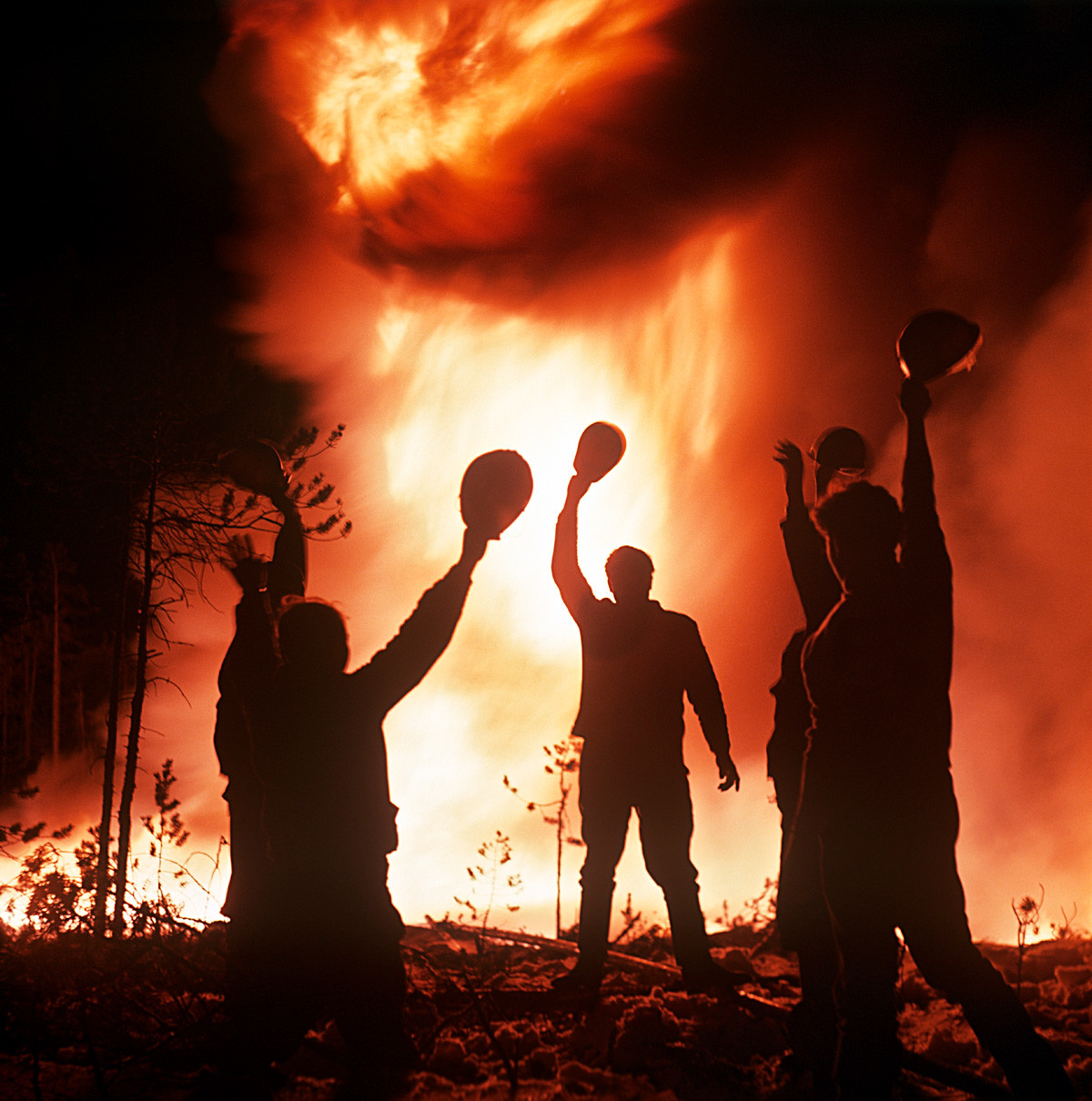 In 1965, the Samotlor oil field was discovered in Siberia. With an area of 1,752 square kilometres, it became the largest in the Soviet Union and entered the top-10 largest in the world. 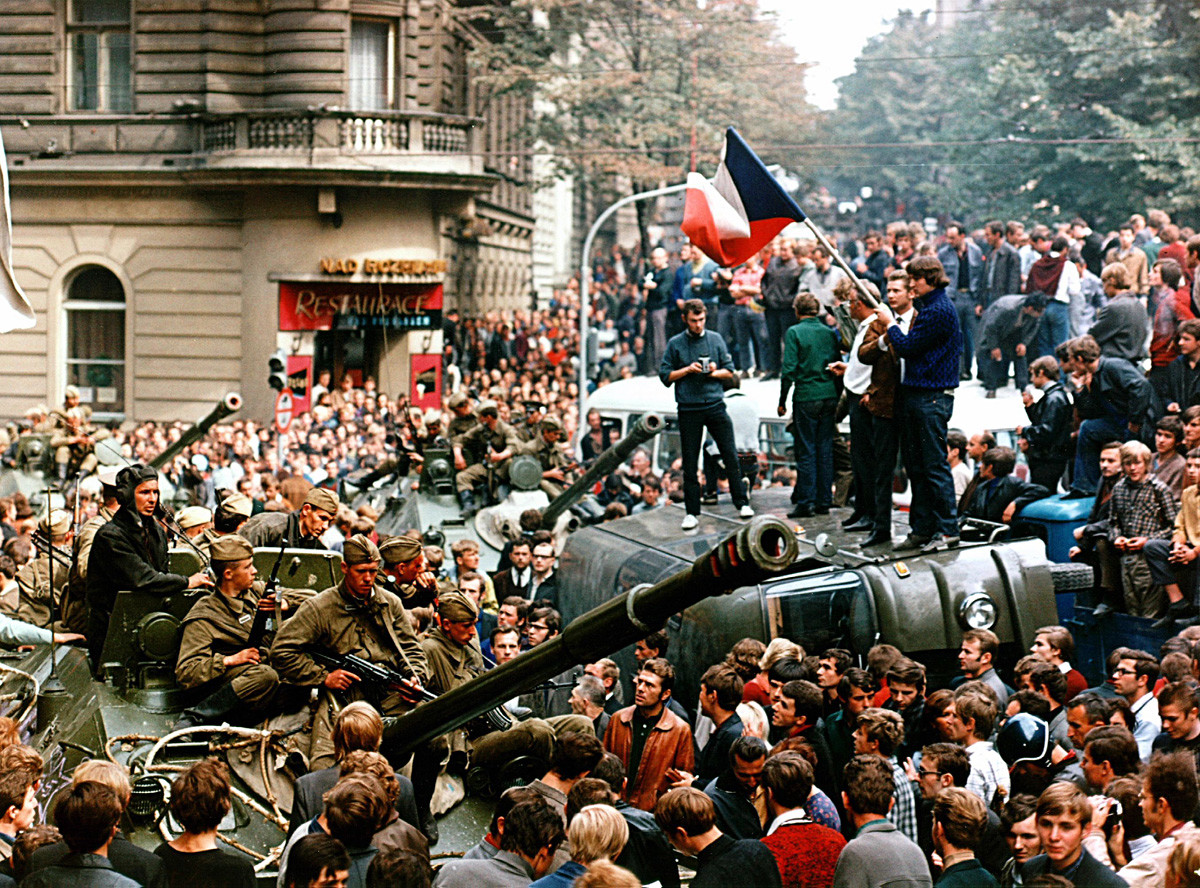 Soviet soldiers try to get to Prague headquarters of Czechoslovak Radio through streets packed by protesting people in August 1968.

The so-called Prague Spring, the period in 1968 of widespread liberalization and democratization in Czechoslovakia, scared the Soviet leadership, which subsequently organized an invasion with  Warsaw Pact troops to pacify the country. Over half a million troops took part in Operation Danube, which ended with a regime change that more suited Moscow’s interests. 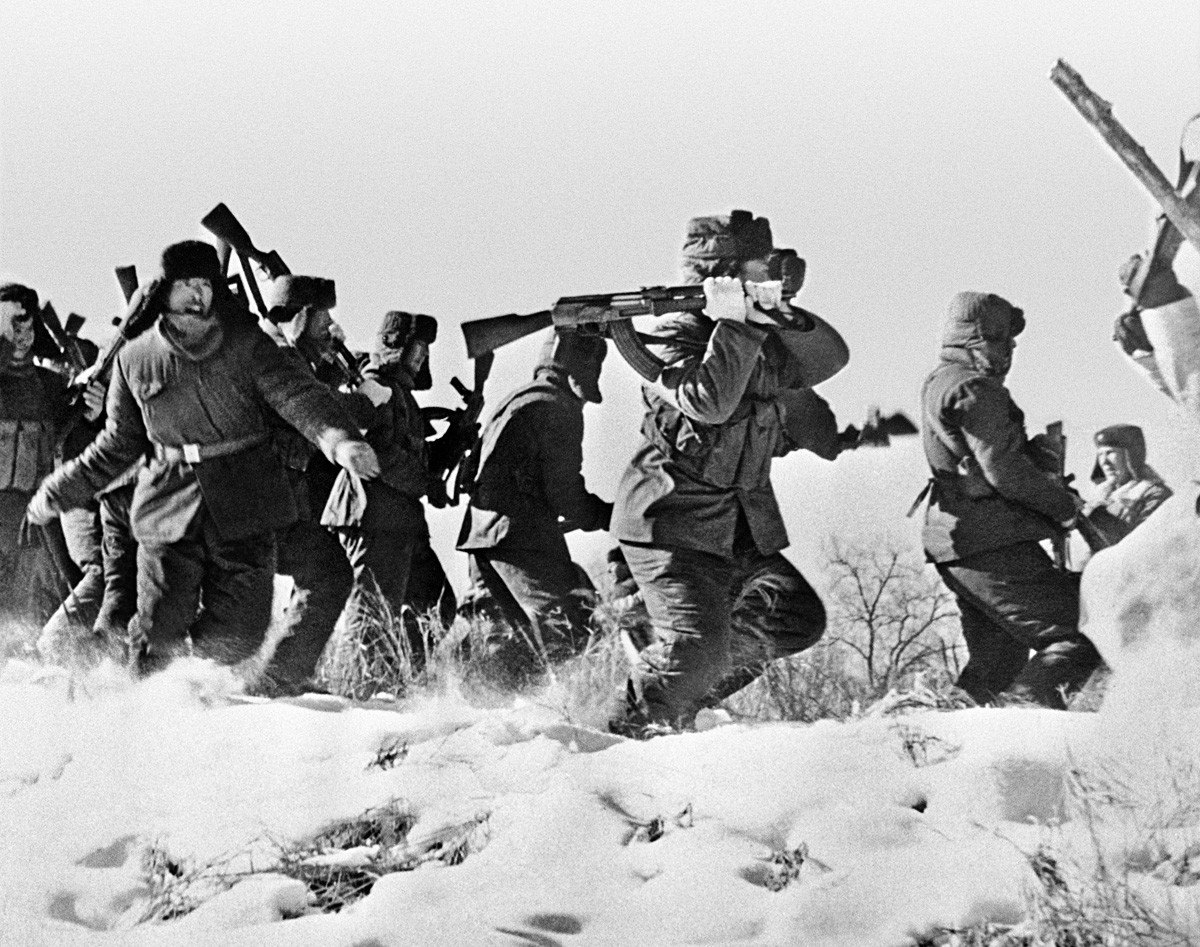 In 1969, the USSR and China fought the largest conflict in their history. During an undeclared war for the Soviet-controlled Damansky (Zhenbao) Island on the Ussuri River, and which was claimed by the Chinese, both sides lost several hundred soldiers. After hostilities ceased, the island remained a disputed territory until 1991 when it was officially given to China.