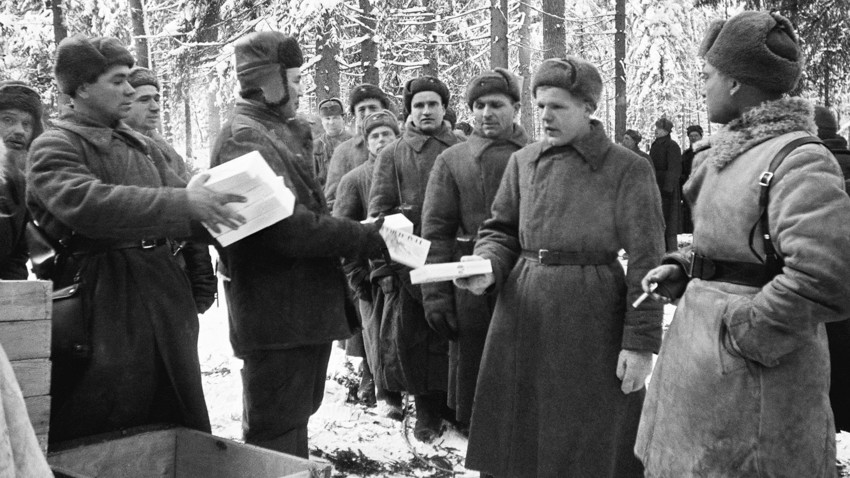 Presents given to the troops of the 8th rifle division, Western front, January 1st, 1942

Viktor Kinelovskiy/Sputnik
It was the darkest time in Soviet history. But even during the war with Nazi Germany, Russian people didn’t lose their spirits. We present excerpts from personal diaries of 1941-1945 on how New Year was celebrated in those times.

Elena Smolina, born in 1929, says the 1942 New Year party in Vologda was very modest. “We decorated a fir tree in school and circle-danced around it. There was no Father Frost, no fun, no cheerful laughing.” 1943 and 1944 were similar, party treats included wheat flatbreads cooked on a kerosene heater and canned stew. 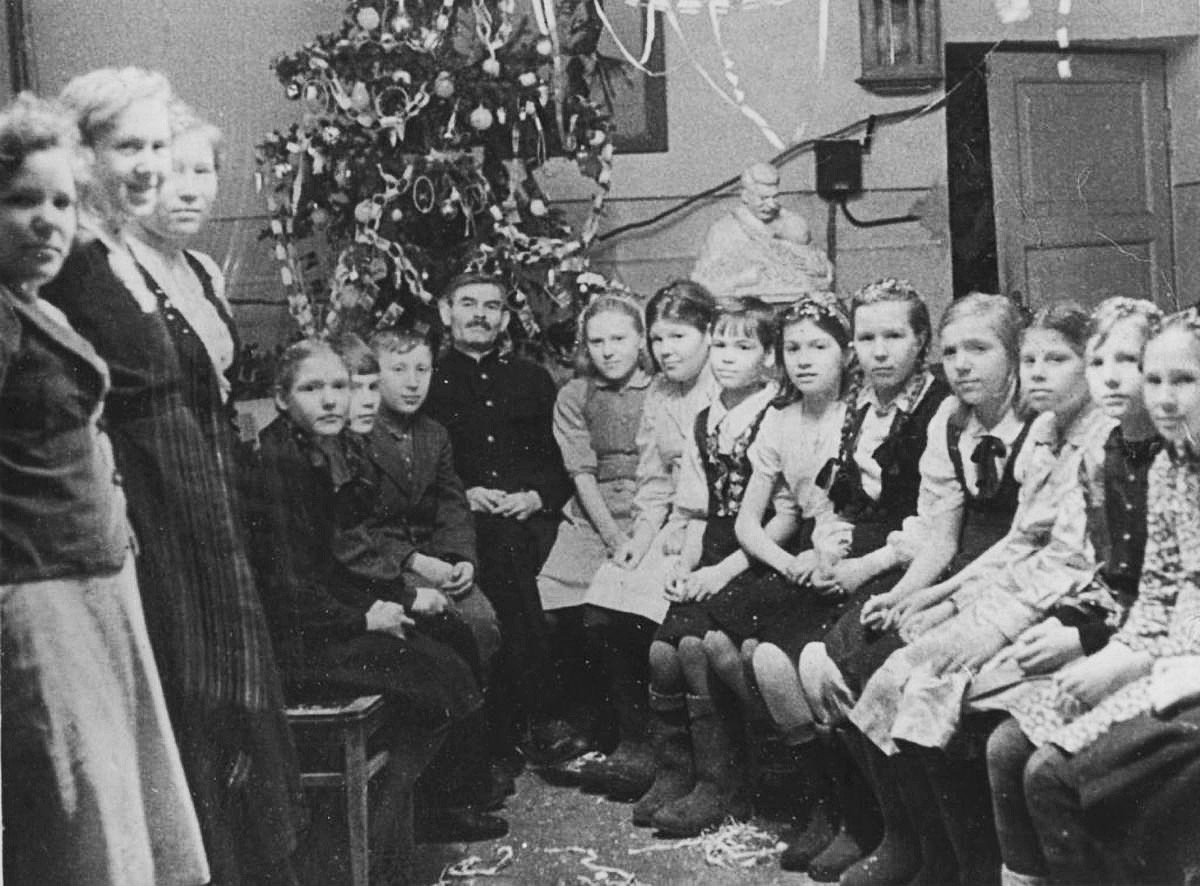 The first ‘real’ New Year was 1946: “Mom’s brother, uncle Seryozha, came to visit – the only one of the four brothers who survived the war! And here were presents, treats, and the joy of seeing each other again! Hot potatoes with herring, pickled cabbage and cucumbers were our meal. At 12 o’clock we listened to the greetings on the radio, congratulated each other, but didn’t stay up for long: January 1st was a working day!”

New Year on the front lines 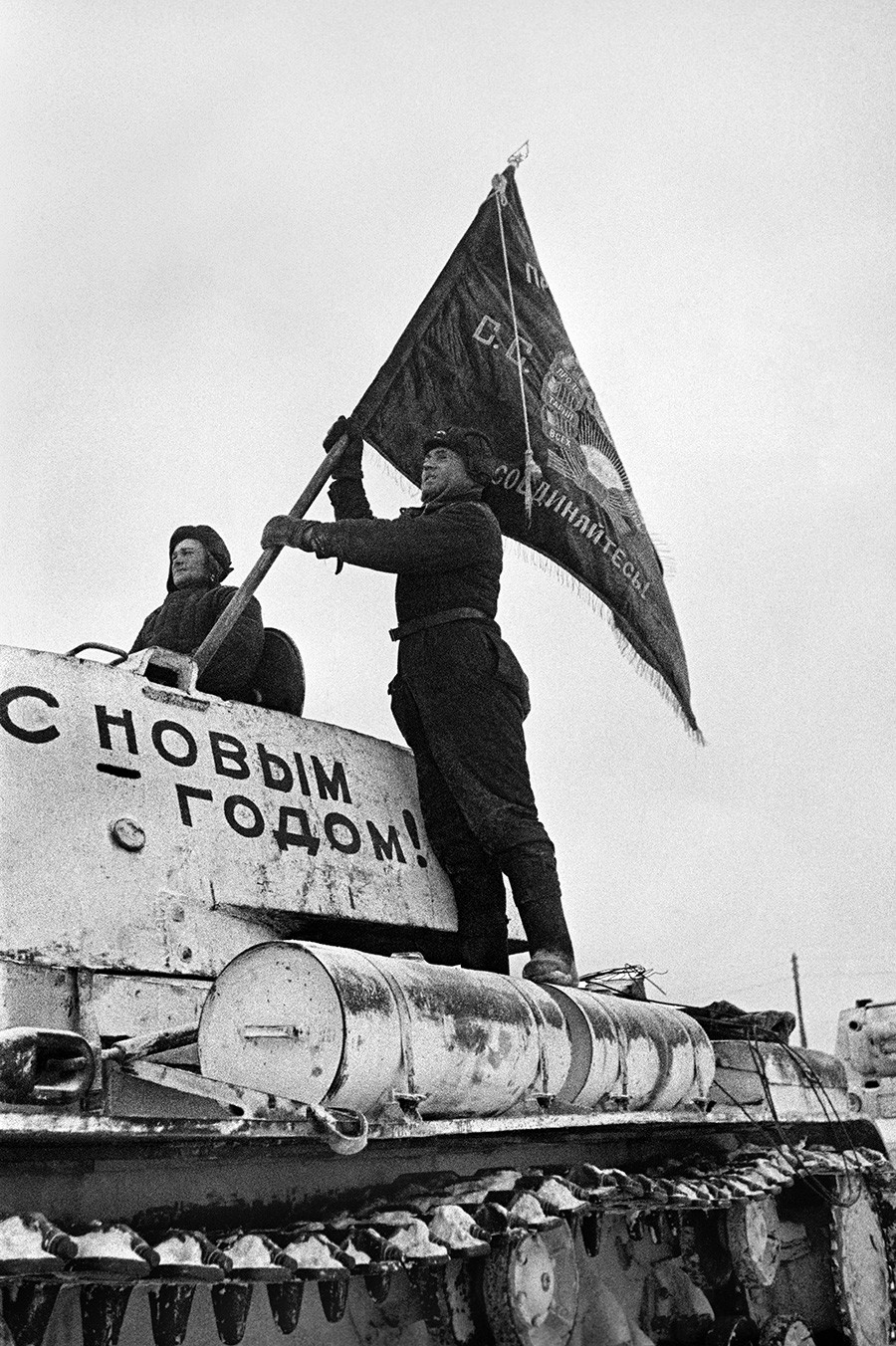 A tank going to the front lines with an inscription: "Happy New Year!", December 31st, 1941, near Moscow

New Year in besieged Leningrad was even more special in the face of the German army surrounding and attacking the city. Rimma Vlasova, remembers the 1941 New Year party: “They found a fir tree, decorated it and invited us, the weak, wasting and barely moving children. I don’t remember any fun at this celebration because it was very hard to cheer up these children, devastated by the bombing of the city, cold and hunger. Nevertheless, this celebration brought us all enormous joy, surprising that it occurred in such appalling conditions. But the most surprising were the treats. Instead of presents, we were handed glass jars that contained a loaf of bread and a tiny piece of horse sausage. This was the real miracle because recently, we didn’t eat anything except bread and water. The joy and the amazements lifted our spirits. And more, we were given presents – jars of sweet, tasty jelly. An unthinkable treasure in those times.” 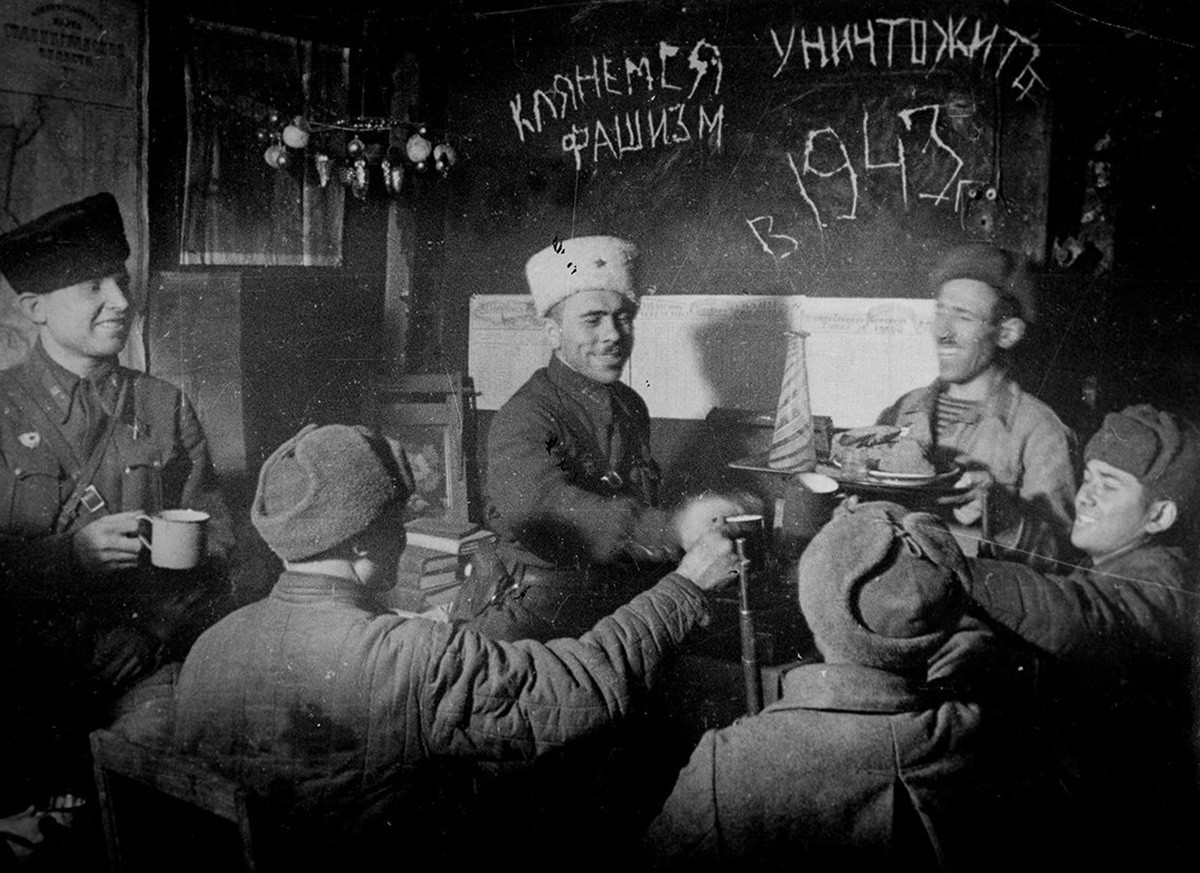 It was much harder on the battlefield, where there was no place for celebration. Leonid Weger, a Soviet intelligence officer, remembered the night of December 31st, 1942, near Stalingrad: “There was no dinner. Sitting in the cold, in damp clothing, it began to become most unpleasant. I remembered this was New Year’s eve; our gloomy New Year’s eve. When the fatigue has worn off a bit, I took my machine gun and went for a walk. In a nearby ravine, I found a tether and some horses. I felt a feed bag of one of them and found some corn cobs. I took one out and started chewing, took another one and put it in my pocket, heading back. We lit up a fire. It became warm. Chewing on the corn that seemed tasty, I went to sleep. I again remembered that it was New Year’s eve and thought, before falling asleep, that it’s not so bad.” 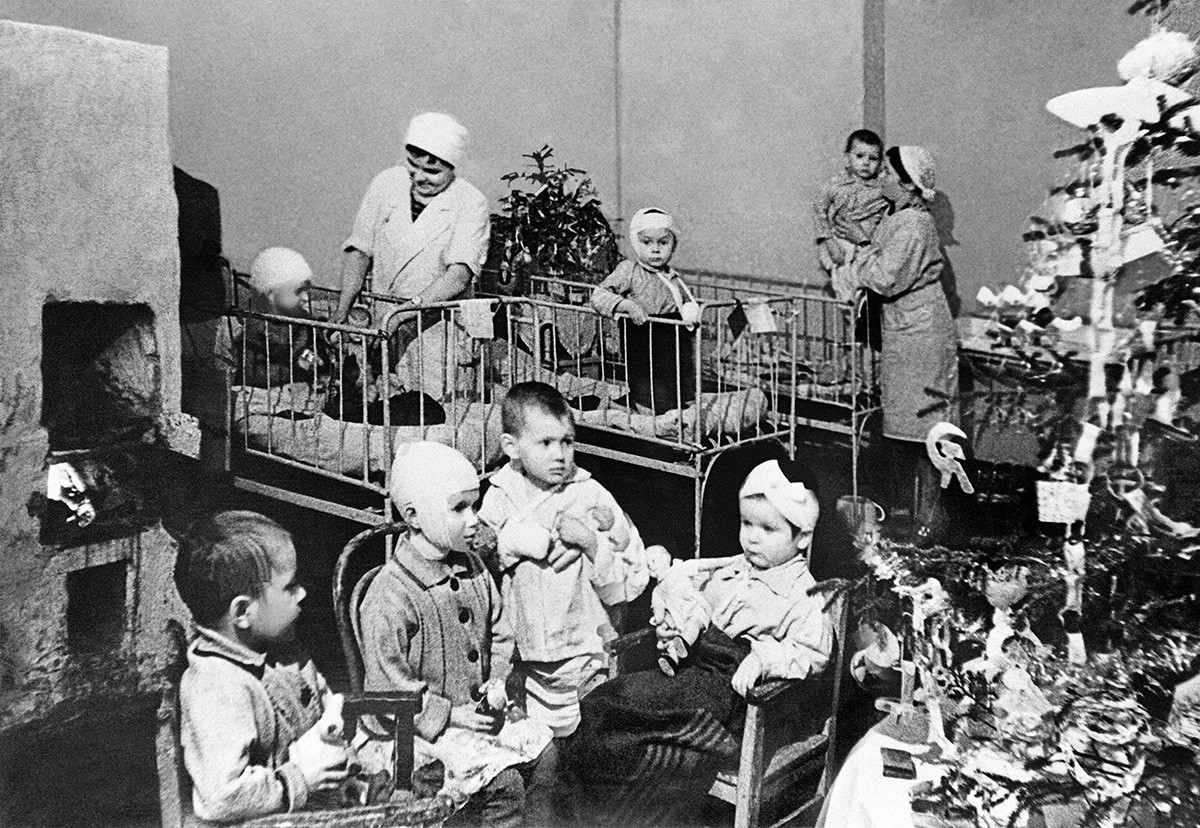 January 1st, 1942 at a child hospital in Leningrad

Some had to celebrate right in the middle of battle. Mikhail Obraztsov remembered that on the last day of 1942, he took part in a counterattack which pushed the Nazis back, and right after this, there was a New Year party. “After placing sentries at their posts, the rest of us gathered in the dugout. The Sergeant major brought us hot food, American beef stew, and vodka. We drank to commemorate the deceased, then drank for the heroism of our warriors, and for the New Year. One of our most sturdily-built soldiers, Kolya Semyonov from the Volga region, asked if he could sing, and started “When I was a coachman” (“Когда я на почте служил ямщиком” – a traditional Russian song). He sang so devotedly we caught our breath and listened, each of us imagining himself as the young hero of this song.” 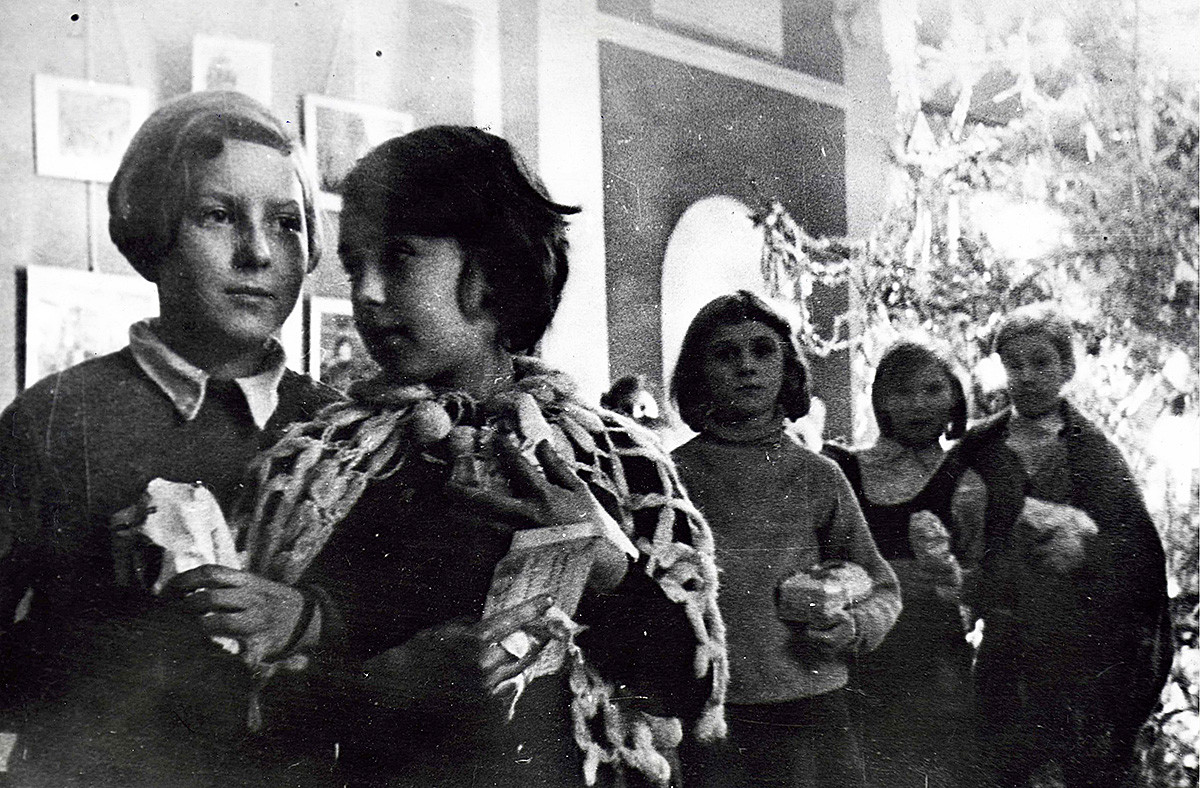 New Year in Leningrad during the siege, 1943

For Soviet people living in occupied cities, it wasn’t a matter of celebration, it was one of survival. “Our family lived in a basement near the German frontline,” remembers Konstantin Zimin, who was a child in wartime Stalingrad. “Shortly before the New Year, the Nazis expelled us, and we were on the street. It was cold and windless, the snow was falling. My older sister Klava carried three-year-old Galya, and I, a 12-year-old, led our 6-year-old brother Zhenya by the hand. We were looking for shelter. We found a summer kitchen, made out of clay, that somehow survived the bombing, and stopped there. We were starving, but we didn’t have anything. There was an elderly couple living close by. They gave us some burned wheat that we boiled and ate. This was our New Year’s dinner.” 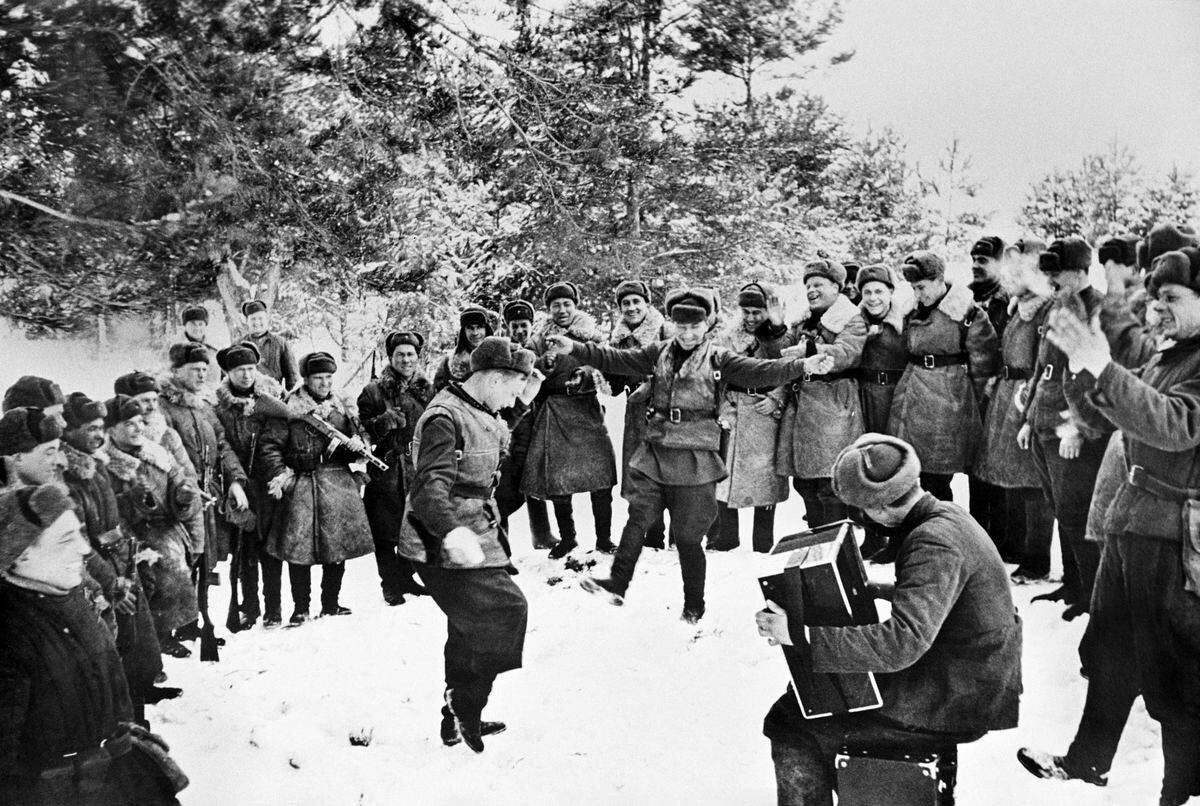 By 1945, when the Red Army was already chasing the Nazis through Eastern Europe, the population of formerly occupied countries joined Soviet soldiers in celebrating. Vladimir Mandrik, a Soviet partisan, wrote about the aftermath of a battle with Nazis on January 1st, 1945, that took place near Rimavská Sobota, a town in Southern Slovakia. After the skirmish, “we saw a small group of Slovaks, about a dozen, approaching us. They brought 30-liter jugs of Cuban rum that a local hotel director sent to us. And about 50 kilos of sausage – workers from a steel plant gave them to us. The locals gathered purposely to celebrate the New Year with us because they knew we warred relentlessly against the Nazis. The Slovaks trusted us fully. If they knew even a single Russian was around among the partisans, then it was their duty to go headlong to war.”