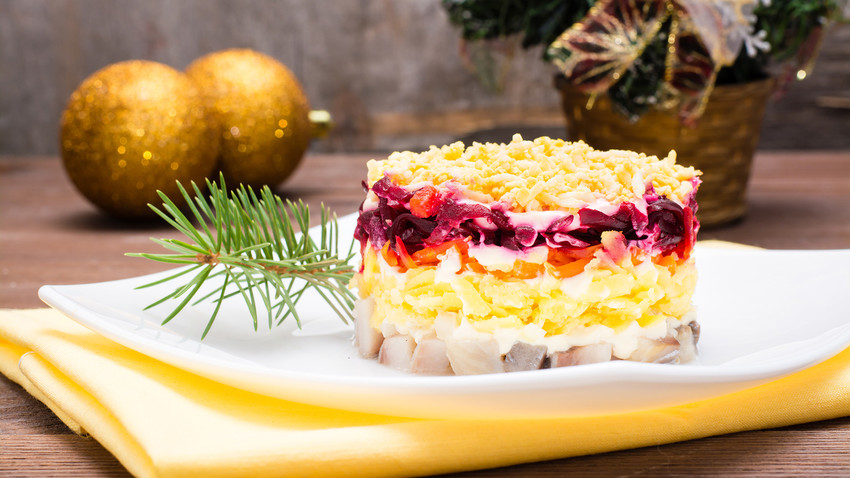 Legion Media
A New Year feast in Russia is unimaginable without salads, especially those made with mayonnaise and bursting with calories. The main courses and desserts take a back seat to these gems of Russian cuisine. 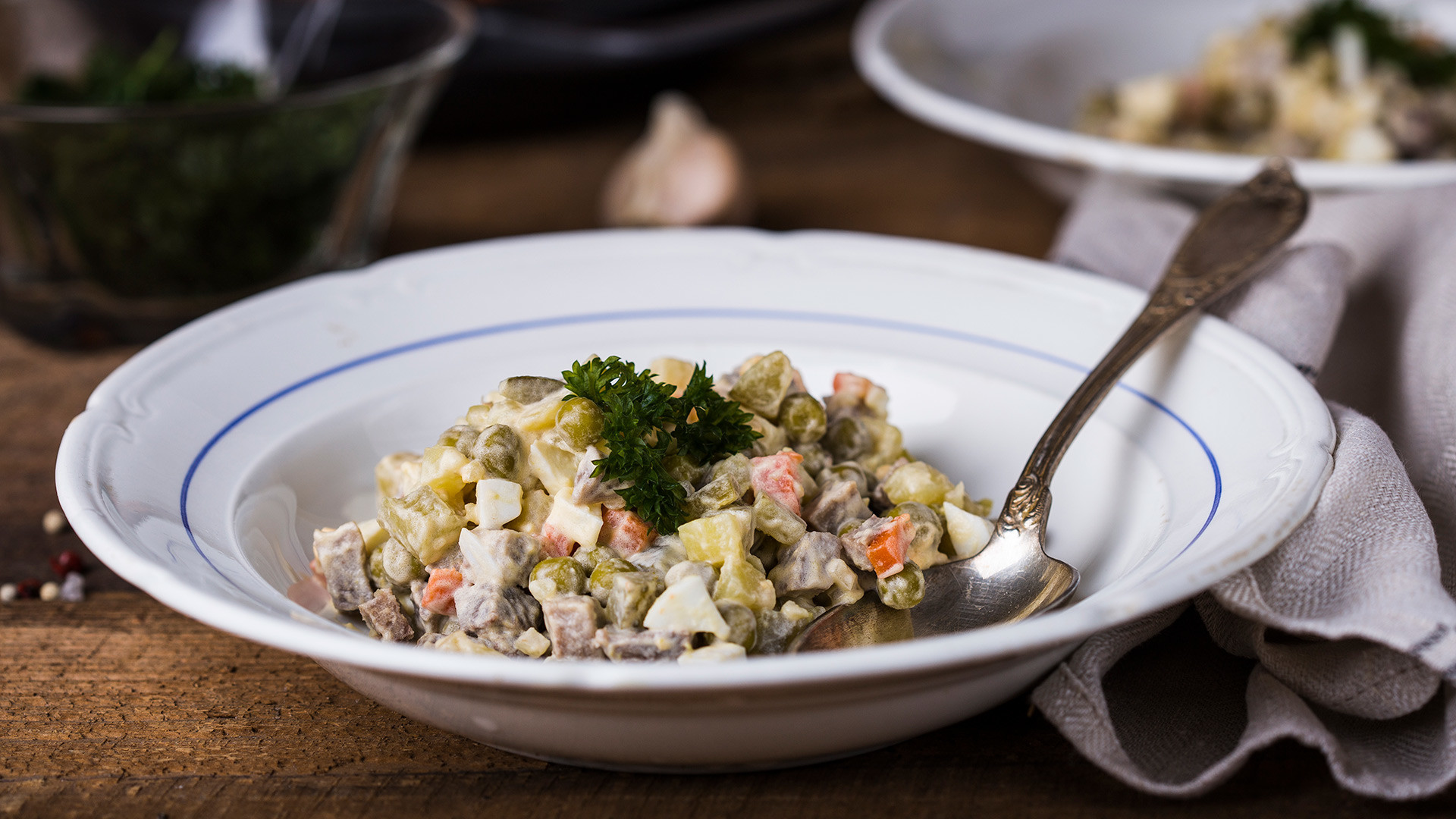 In the 19th century, French chef Lucien Olivier, who worked in the Hermitage restaurant in Moscow, kept secret the recipe for his trademark salad. The original version contained wild game, crayfish, caviar and a secret dressing. Later, the salad recipe changed, then disappeared and returned only in the mid-20th century. By then, expensive wild game was replaced by sausage, and capers with pickled cucumbers. The salad became affordable and accessible to millions of Soviet citizens.

2. Herring under a fur coat 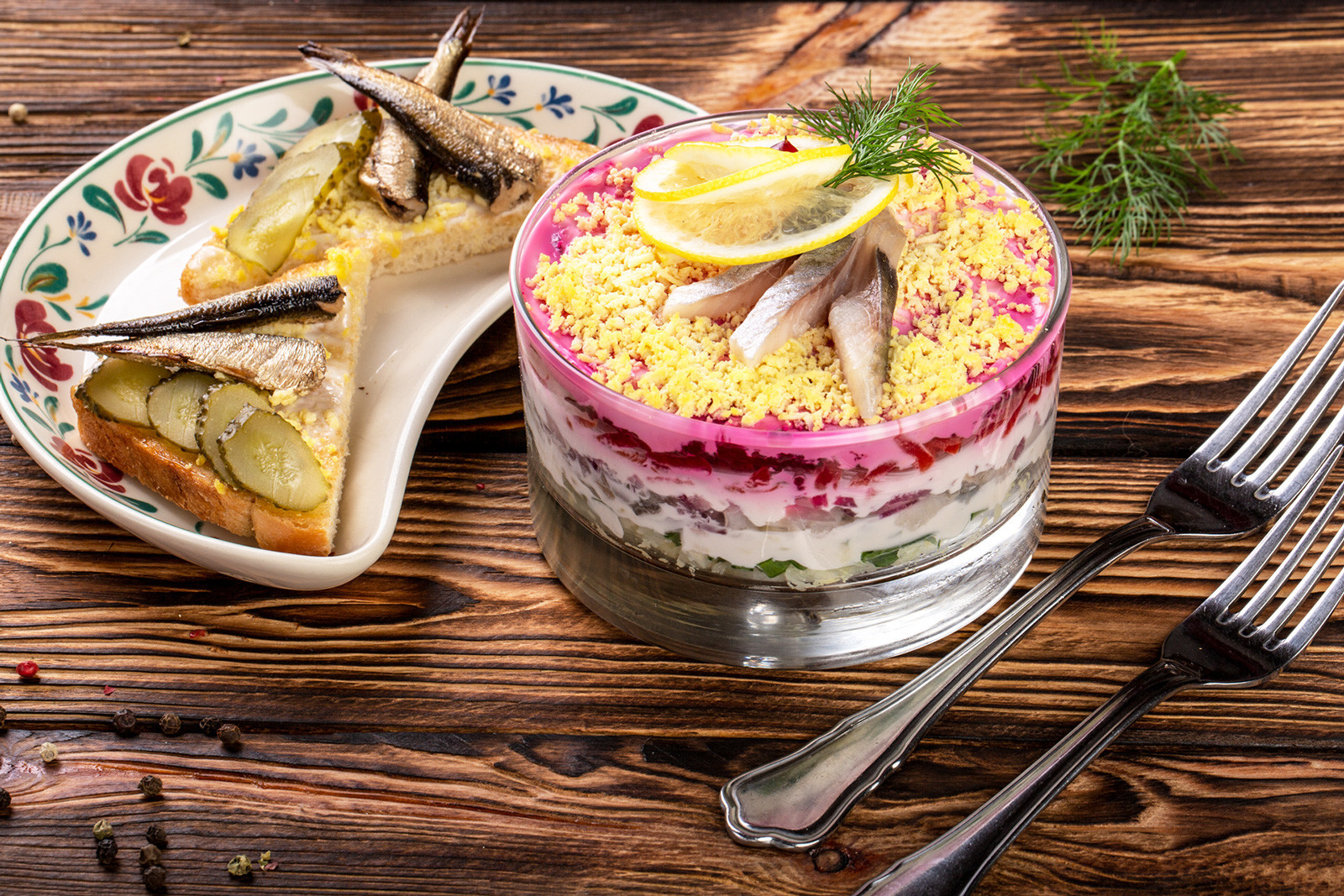 The origins of this layered salad are shrouded in legend. According to one, this dish existed before the 1917 revolution, and it was served in taverns since vegetables, onion rings and oil helped to conceal the less-than-perfect quality of the herring. In addition, herring is a good snack to have when drinking alcohol. According to another legend, the salad was created by Moscow merchant Bogomilov shortly after the revolution, and all its ingredients had a particular meaning: beetroot symbolized the revolution; carrots and onions - the peasantry; and herring - the proletariat. All the ingredients are placed in layers and dressed with mayonnaise. 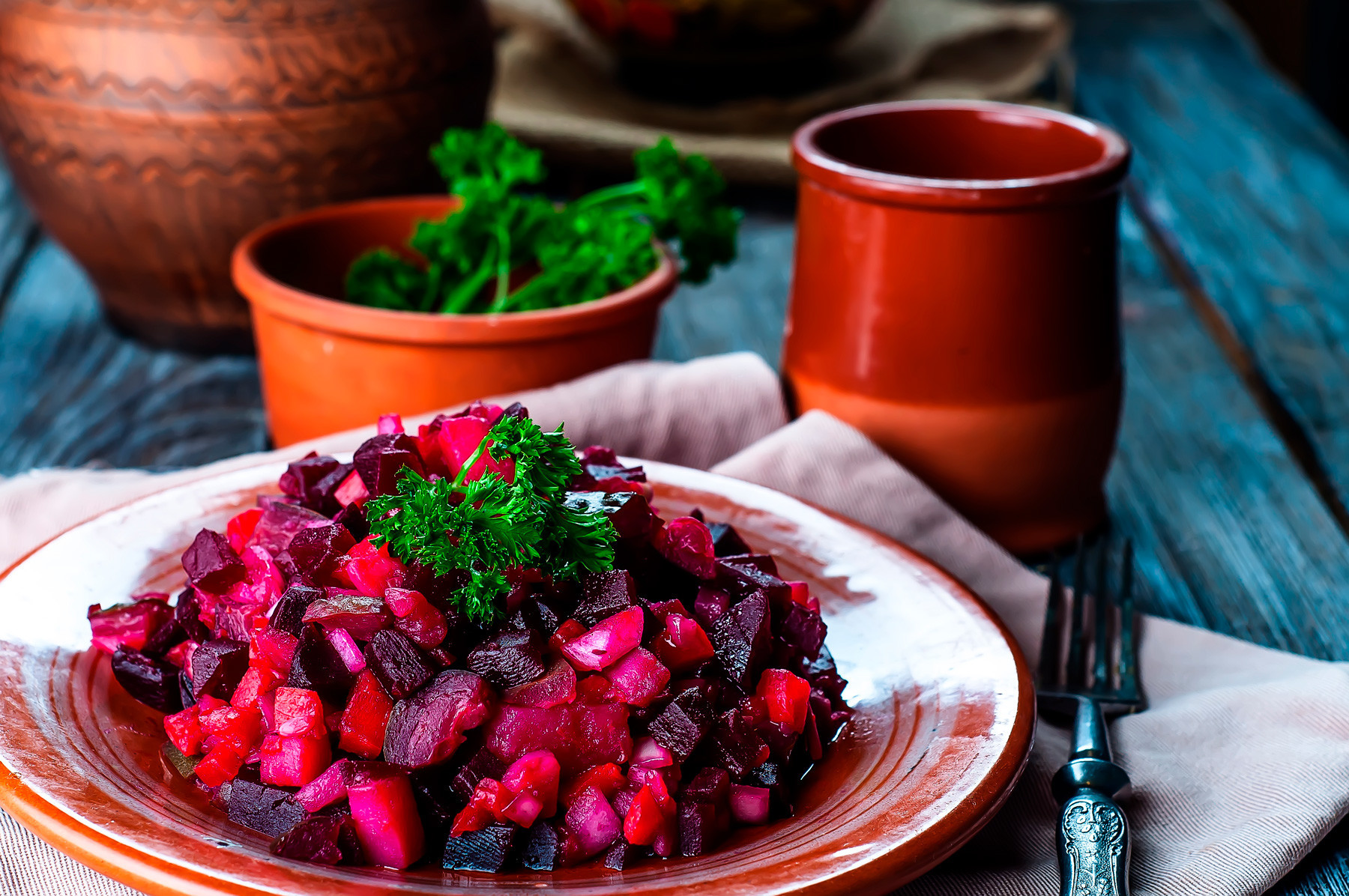 While it’s not certain when vinegret salad was first made in Russia (either in the late 18th or early 19th century), the fact is that it has become so popular that it’s now a staple of the Russian diet, and it’s prepared not only for special occasions. The dressing is vegetable oil and not mayonnaise, which is especially important when the table is packed with mayonnaise salads; thus, giving another option to those who might not like mayo. The ingredients are simple: beetroot, pickled cucumbers, peas, carrots, and potatoes. 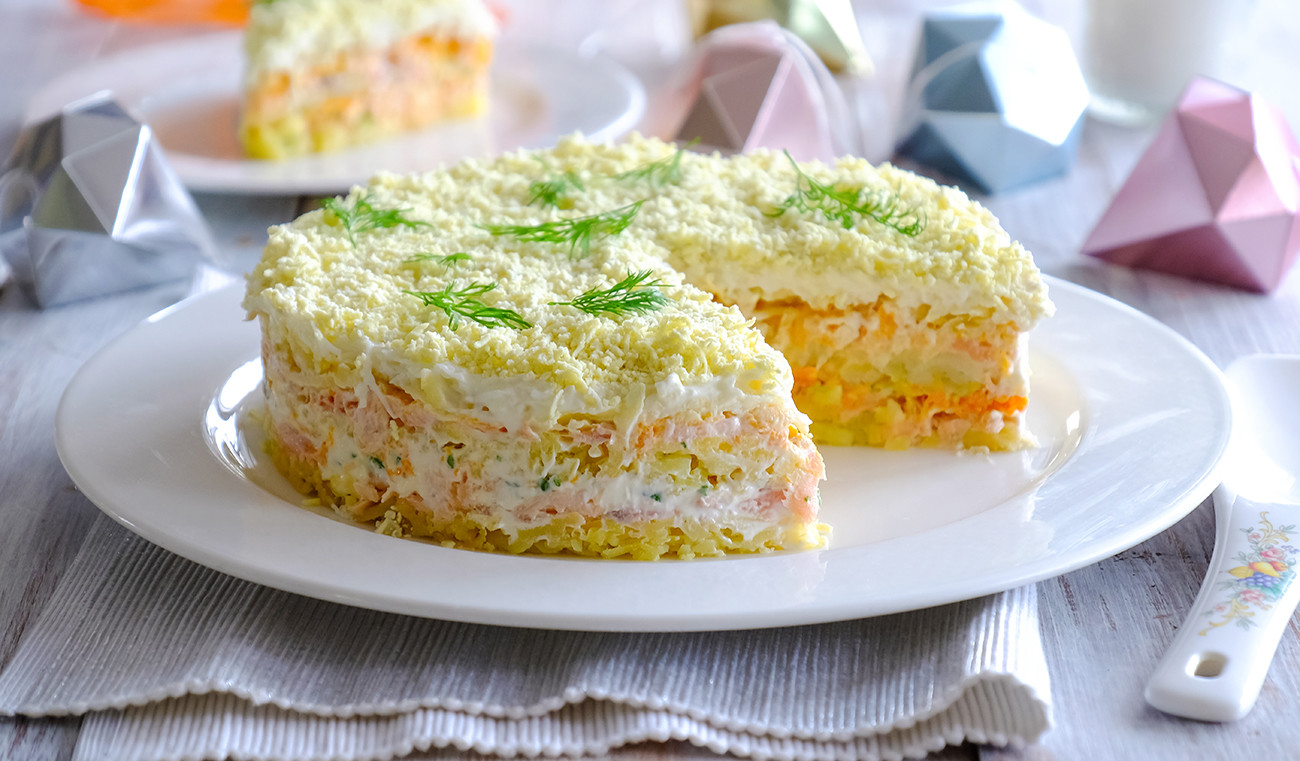 This salad, which is decorated with yellow crumbs on top, has become a regular on the festive menu since it appeared in the 1970s. There is a theory that it was created by chefs in Abkhazia ahead of International Women's Day, with the grated egg yolks on top symbolizing the mimosa, which grows in Abkhazia and is associated with the women's holiday, March 8.

Ladies vacationing in Abkhazia loved the salad made of canned fish, eggs, carrots and potatoes, and took the recipe home with them, thus spreading the recipe all over the country. These days, this salad is served mainly for New Year’s celebrations. 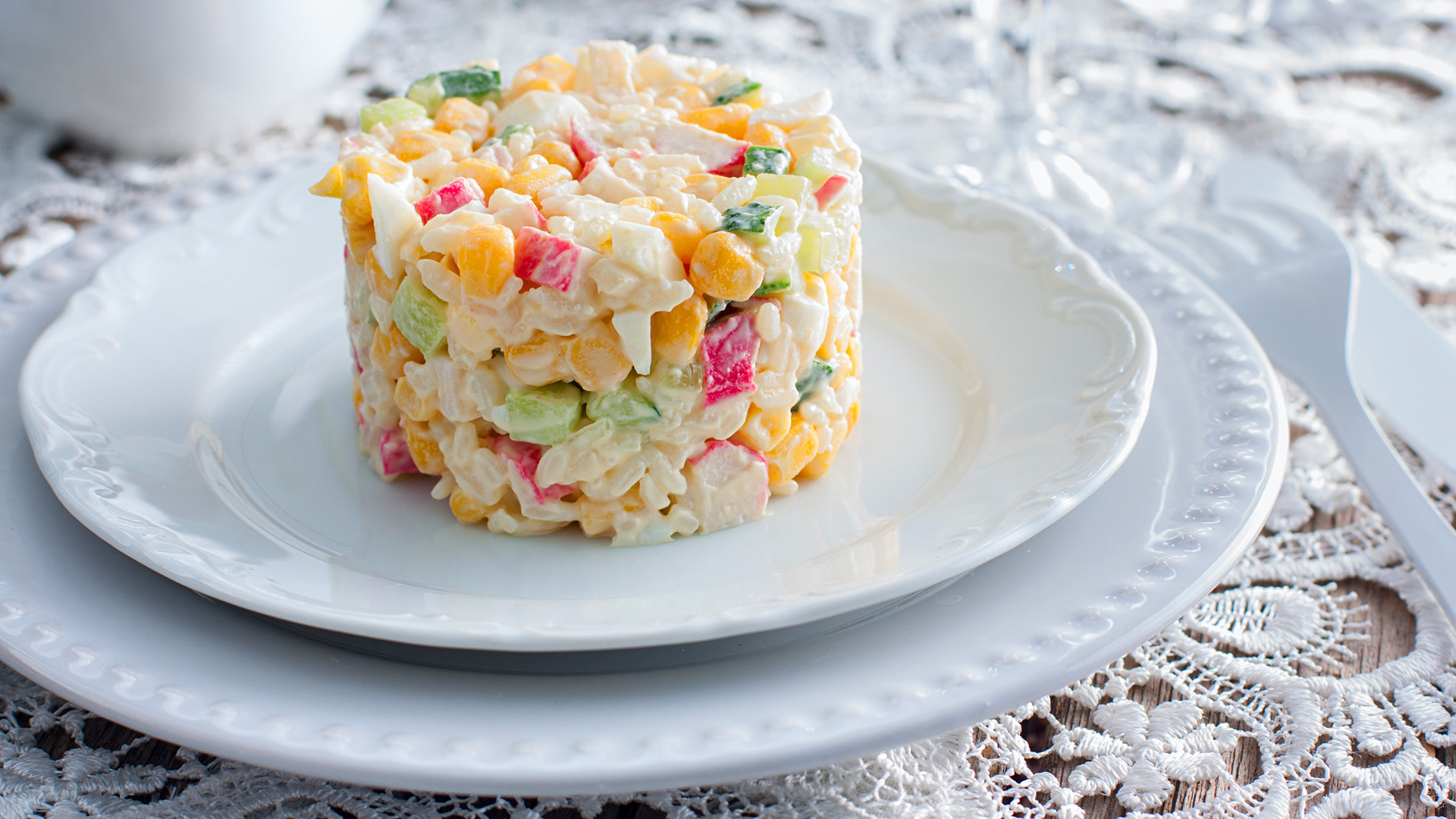 The recipe for this salad, another one made with mayonnaise, appeared in the USSR in the 1980s. The main ingredients are: crab sticks, eggs, and cucumbers, with rice and corn as optional additions. Few people still believe that crab sticks contain real crab meat, but the salad continues to be considered 'expensive' and therefore appropriate for special occasions.