5 favorite Soviet sauces, and how to make them 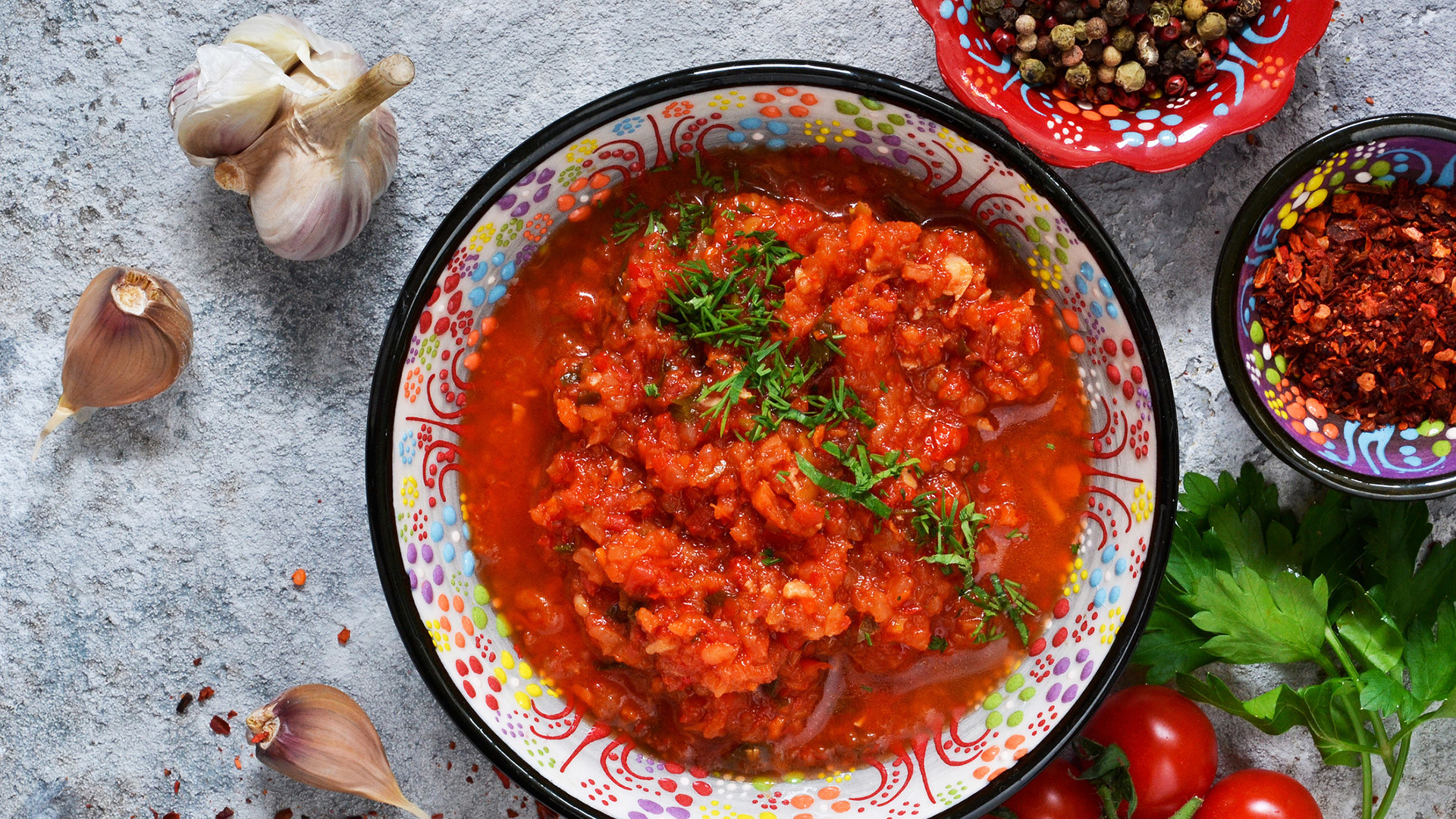 Legion Media
Making a sauce isn’t always about making a dish that much better - it’s also often about helping your body sort through all that fatty goodness you’ve just bombarded it with. So, if you’ve got a big dinner or bbq coming up, consider making these.

Soviet cuisine loves its sauces - we’ve got dozens of them. A few are difficult to pull off at home, and so were only available in stores or restaurants. What we’ve got here, however, is something you can definitely swing on your own. 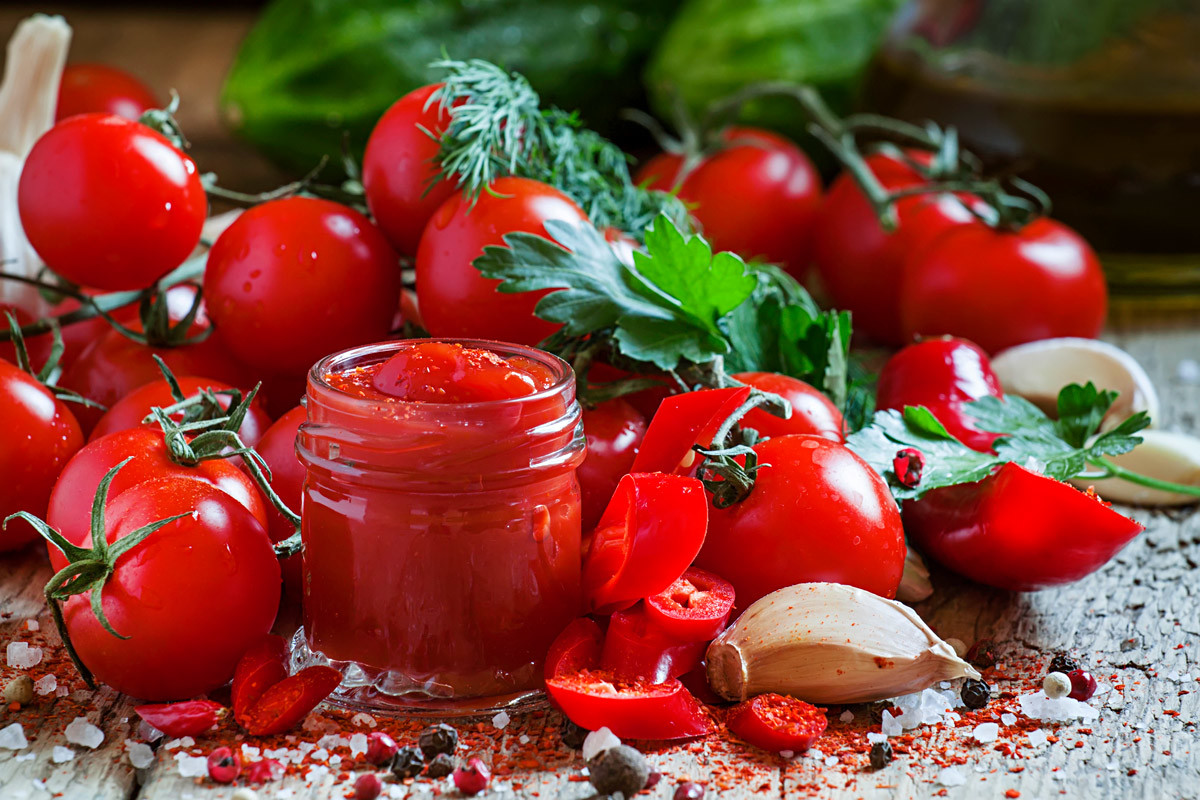 The orange-red shade of this tomato sauce has gone down in history as the most vivid memory of what people used to have on their meat patties when visiting public eateries. It differs from your traditional ketchup in that it’s made from peeled ripe tomatoes with added sugar, onion, garlic, vinegar and spices. You can use it as dressing for just about anything - from meat to entres and even soups.

How to make it: Start by blanching 2kg of tomatoes, peel them and cut out the middle. Place part of them in the pot, add 150gr sugar and some water. Bring to the boil. When the water evaporates, repeat the process. 15 minutes before finish, add crushed spices (20 seeds of cloves, 5g cinnamon, 1,5g mustard powder, 15 peppercorns of both kinds), follow that with 100g onion and 3 cloves of garlic, after running them through a grinder. Before you pull out the tomatoes, add 35g salt and 130g of 6% vinegar. Pour the results into jars and let sit before refrigerating. 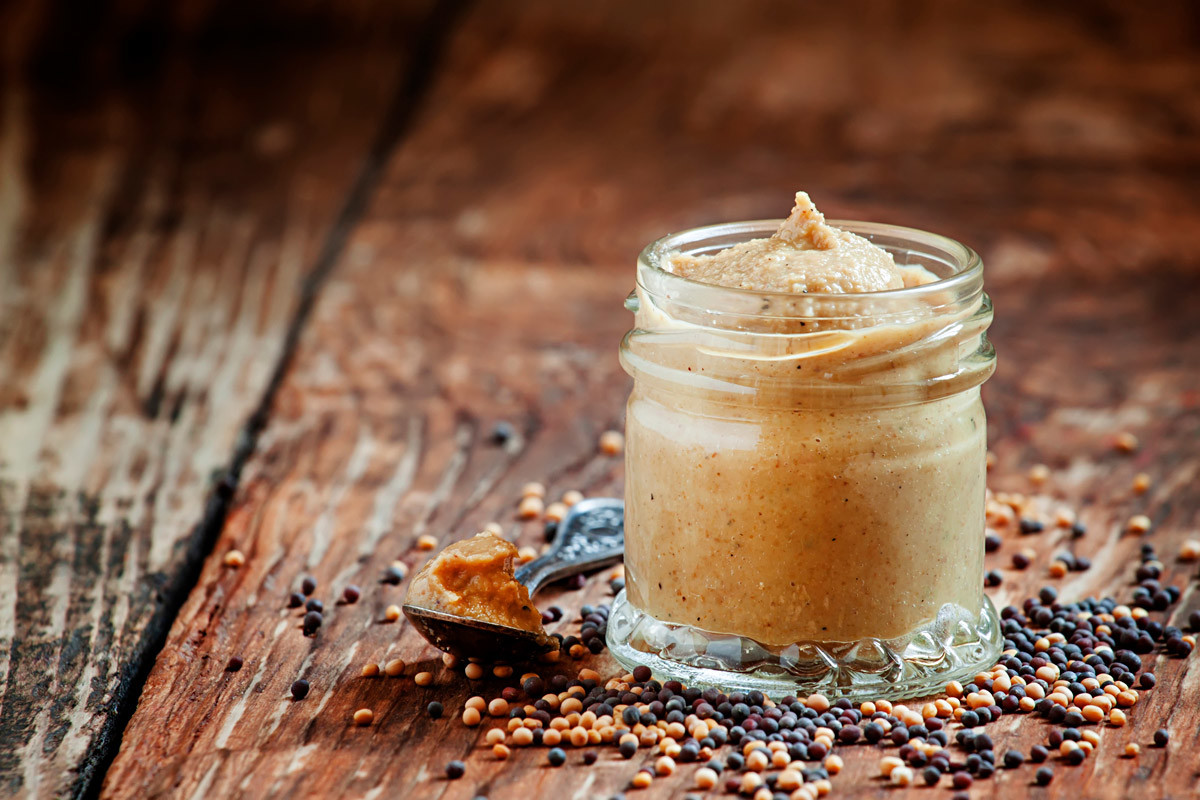 In Soviet times, mustard was one of the most common dressings to use. The Book of Healthy and Tasty Food (1952) says we used to produce it in such industrial quantities that there was practically no need to try doing it at home. Nevertheless, if you’re after the table kind - and not the Dijon - it can be used in a variety of marinades, as well as for various other home-cooked dishes, including meat and fish.

How to make it: Mix 100g mustard powder with a half-glass of boiling water, mix well, then add 2-3 more glasses of boiling water, and leave to cool for the night. The next day, pour out the remaining water and add 1tbsp each sugar and salt, 2tbsp 3% vinegar, a mix of spices to taste (usually cloves, cardamon, nutmeg or ginger). Stir the entire time when mixing in the seasoning and spices. Leave the resulting sauce for 2-3 days to come together, and you’re good to go. 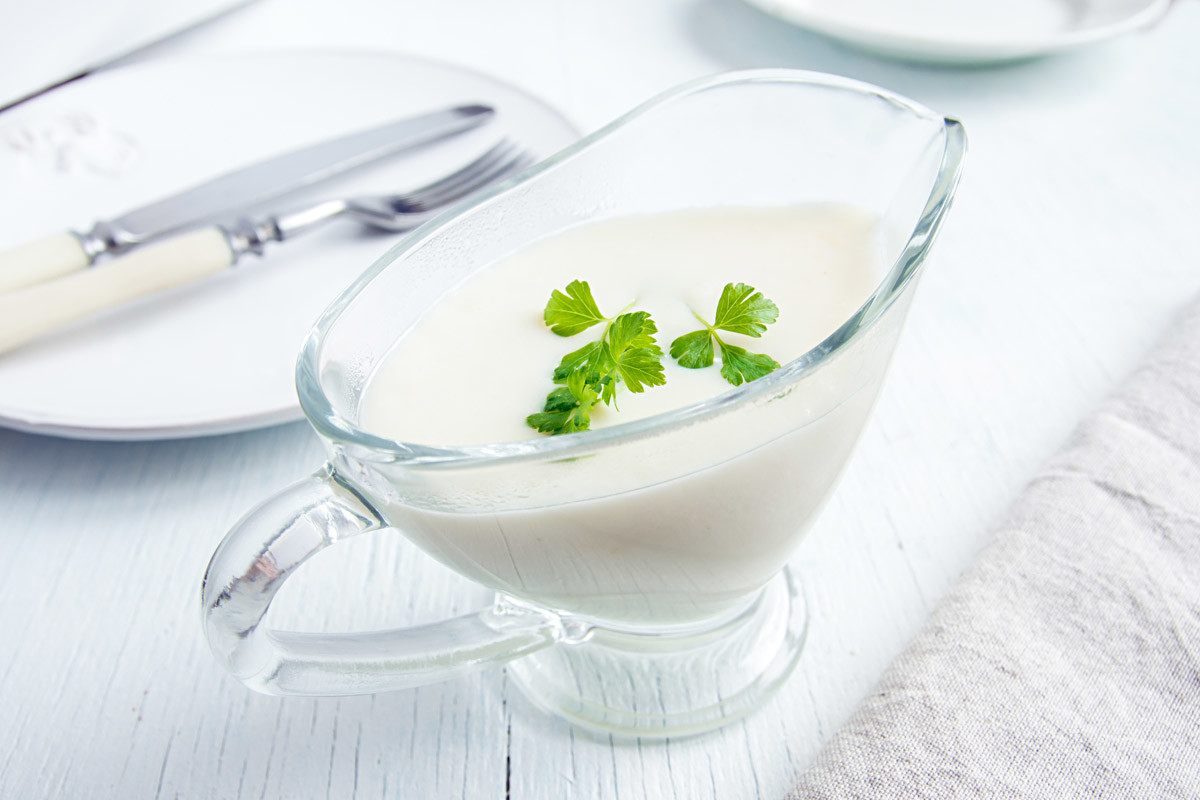 This deceptive invention isn’t quite sour cream. But it’s the best thing to go with your various potato pies and all manner of other potato dishes - or even the traditional Russian meat patties and meatballs. It’s very applicable in every scenario, and can be turbo-charged with horseradish and improvised with cheese or garlic - the possibilities are endless.

How to make it: 1tbsp flour mixed with 1tbsp butter whisked in and fried, stirring constantly, followed by ½ glass vegetable broth or water and 1tbsp sour cream. Leave to boil for 5 minutes, add salt to taste and drain. 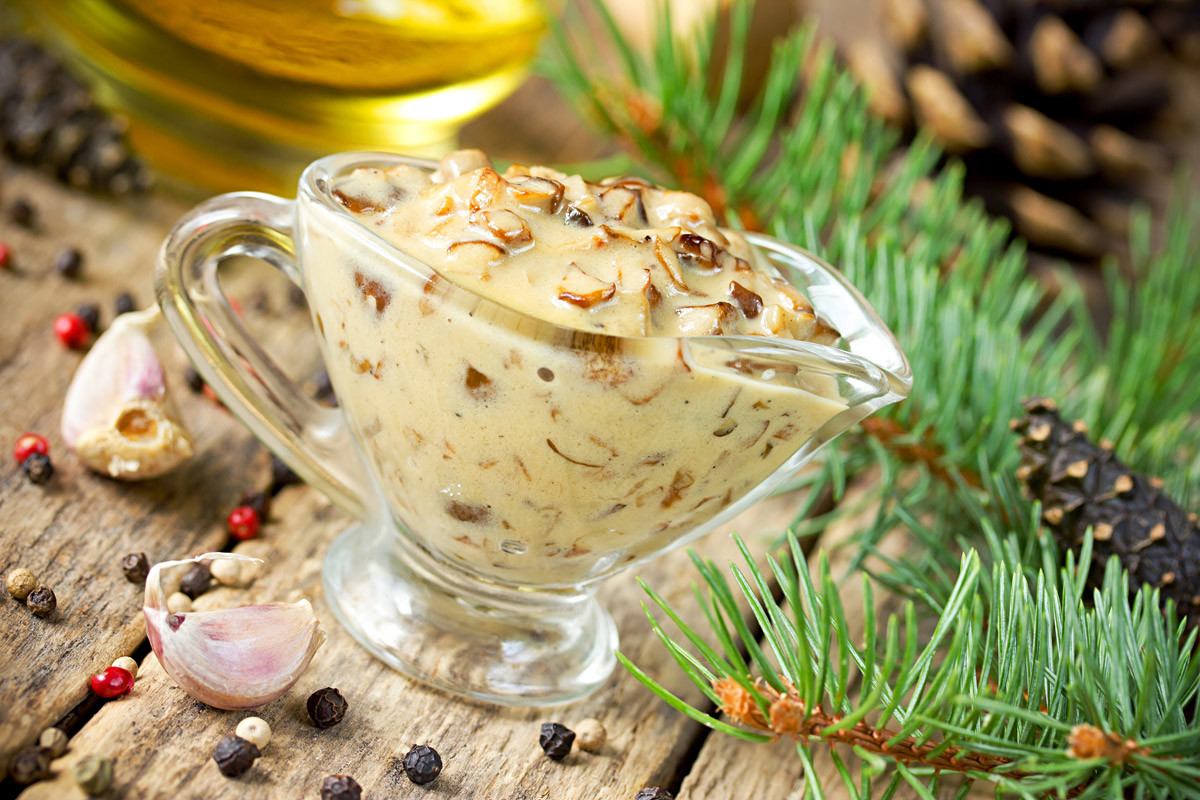 Nothing beats this bad boy when it comes to boiled potatoes, or pie or - again - patties, if you’re not a ketchup type of person.

Both fresh and dried mushrooms work equally well for this.

How to make it: Wash 50gr mushrooms in warm water and soak in 3 glasses of cold water for 3 hours. Then throw the mushrooms in a pot and bring to the boil. (When doing this with fresh mushrooms, you can boil immediately, skipping the first steps). 1tbsp flour + 1tbsp butter, fried until light brown, whisked with 2 glasses mushroom broth. Bring the resulting liquid to the boil for 15-20 minutes. Fry 1 finely chopped onion in a skillet with butter, add the diced boiled mushrooms and fry for a little while together for a few minutes. Then add the resulting mixture to the sauce, add salt to taste and let cook for a couple more minutes until simmering. 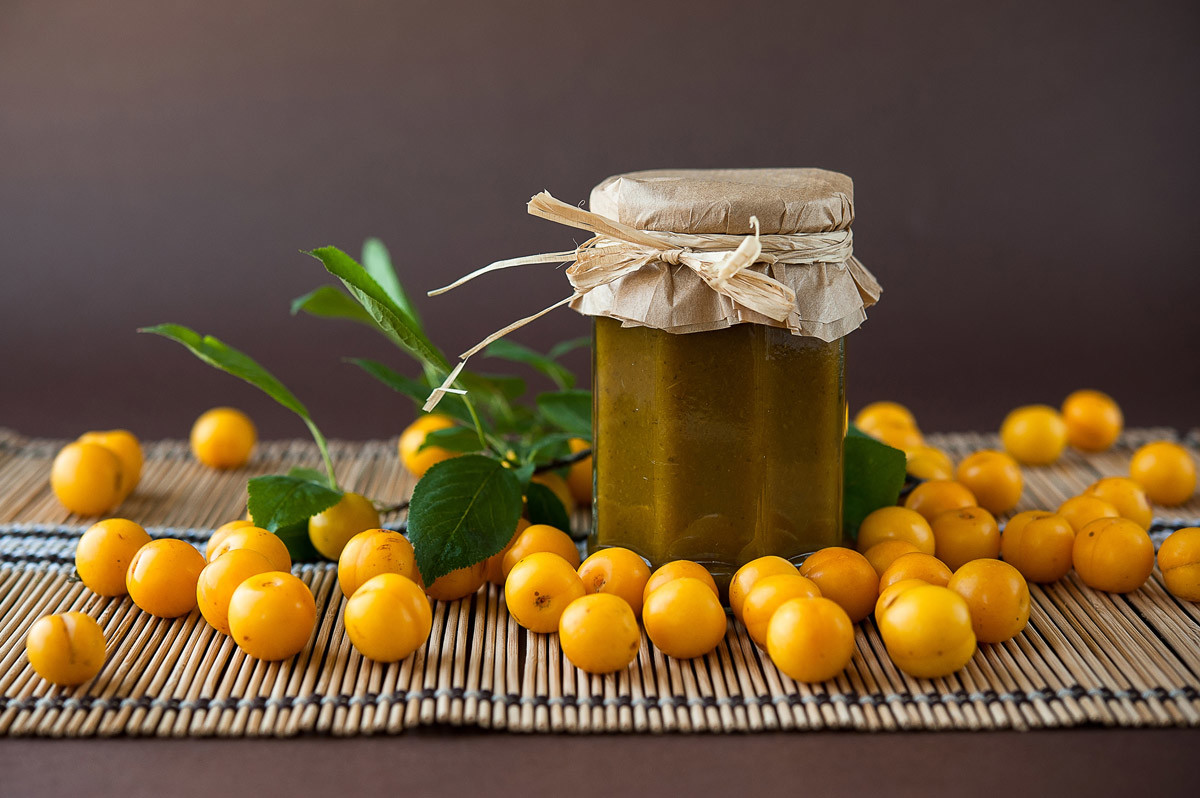 This is the heart and soul of Georgia. The name of the sauce actually comes from the plums used in its preparation. Use an under-ripe alycha (sour plum) if you can’t find the Georgian sort. Note: sweet plums won’t do here! But it’s worth the hassle, particularly if you’ve never tried it with shashlik or kebab, or any type of spitroast you might have going on, including chicken.

How to make it: Wash 1kg sour plums and drown in water. Bring to the boil for 10-15 minutes (medium fire). The resulting mixture must be drained and the pits taken out, followed by mashing the plums through a strainer and stir until you achieve the consistency of sour cream. Add 1tbsp garlic, 30gr sugar, 30gr salt, finely ground red peppers, 10g ground coriander, 50gr herbes de provence or something similar, bring to the boil for 15 minutes, then let cool.

If you’re preparing the sauce for later consumption (such as in winter), boil for 25 minutes.