How a Russian introduced bodybuilding to the masses 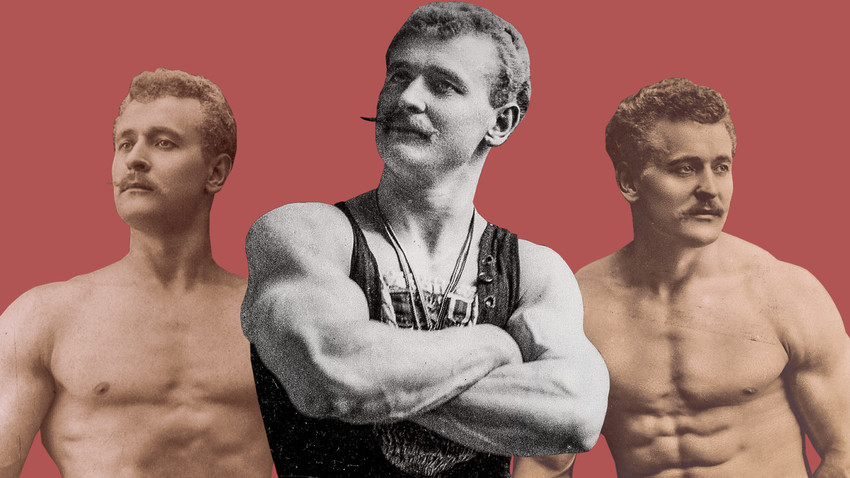 Benjamin J. Falk; Mary Evans Picture Library/Global Look Press; Library of Congress
Eugen Sandow was remarkable not only for his great strength but also his sharp mind. An active promoter of bodybuilding and the founder of the world's first chain of fitness centers, as well as a sports nutrition brand, he served as an inspirational figure for people like Arnold Schwarzenegger.

"The father of modern bodybuilding" Eugen Sandow is a cult figure for millions of bodybuilders around the world, including celebrities like Arnold Schwarzenegger. He didn’t just have big muscles and incredible strength, but also possessed sharp business acumen. It is thanks to Sandow that bodybuilding became universally popular and has been transformed into a multi-billion-dollar business today.

Eugen Sandow was born in 1867 to a German father and Russian mother. His name at birth was Friedrich Wilhelm Müller, but for his career he decided to use a pseudonym based on his mother's "colorful" Slavic maiden name of Sandov. 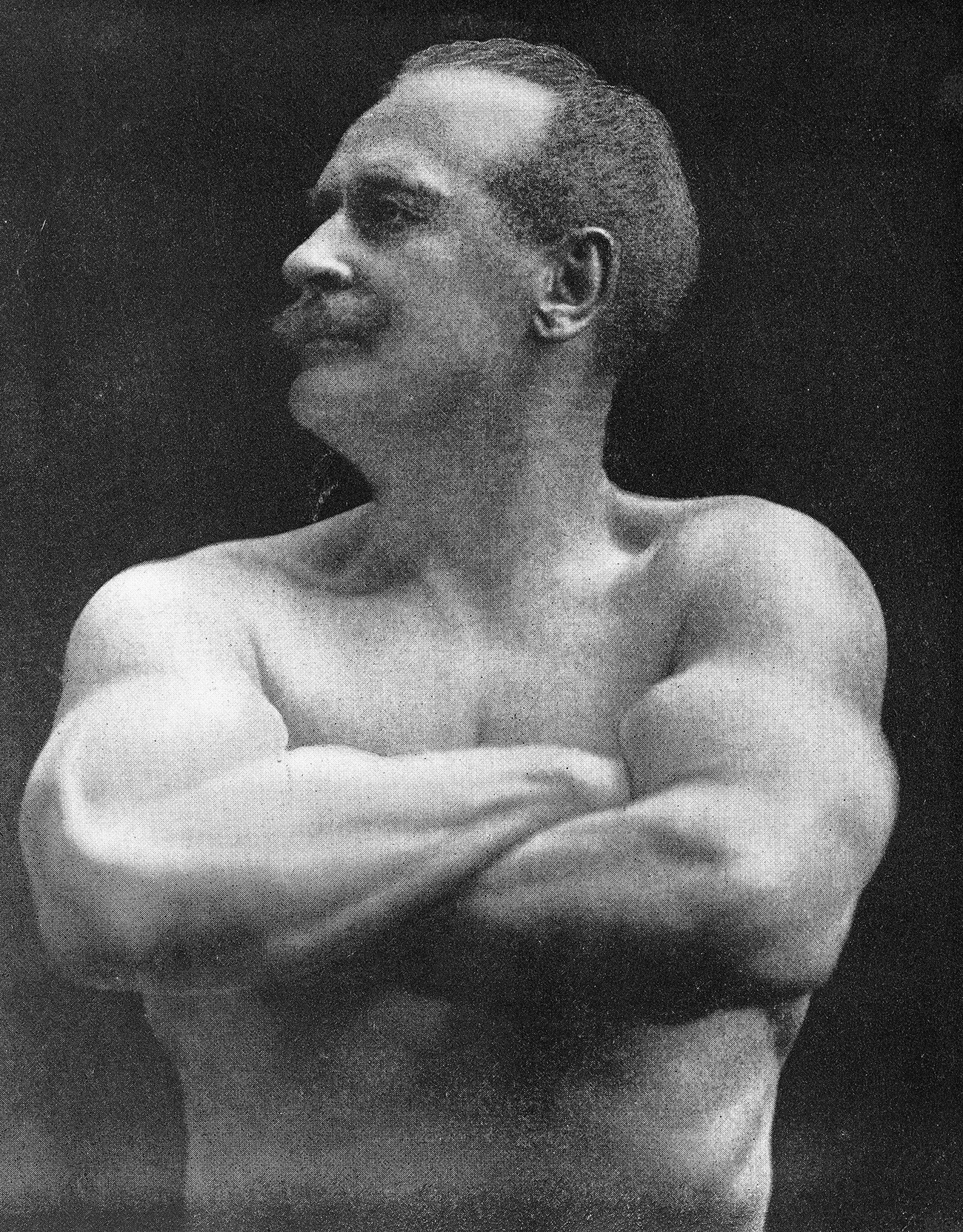 Like most prominent "self-made" bodybuilders, Eugen was skinny and sickly child. He embarked on a training programme in pursuit of the clear goal of completely changing his physique. He also became a medical student, studying human anatomy and physiology. This knowledge came in very useful when he left his native Königsberg (now the Russian Baltic exclave city of Kaliningrad) to promote bodybuilding around the world.

Famous German strongman Ludwig Durlacher, known as Professor Attila, played a big role in the making of Sandow as an athlete. Under his mentor's guidance, Eugen rapidly turned from a skinny teenager into a beefed-up athlete.

Sandow travelled the world and lived in Belgium, Britain and the U.S., where he worked as a circus strongman. He was not a giant at all - he was 5' 6" (170cm) tall and weighed 176lbs (80kg). However, he had enormous strength hidden behind these modest vital statistics. 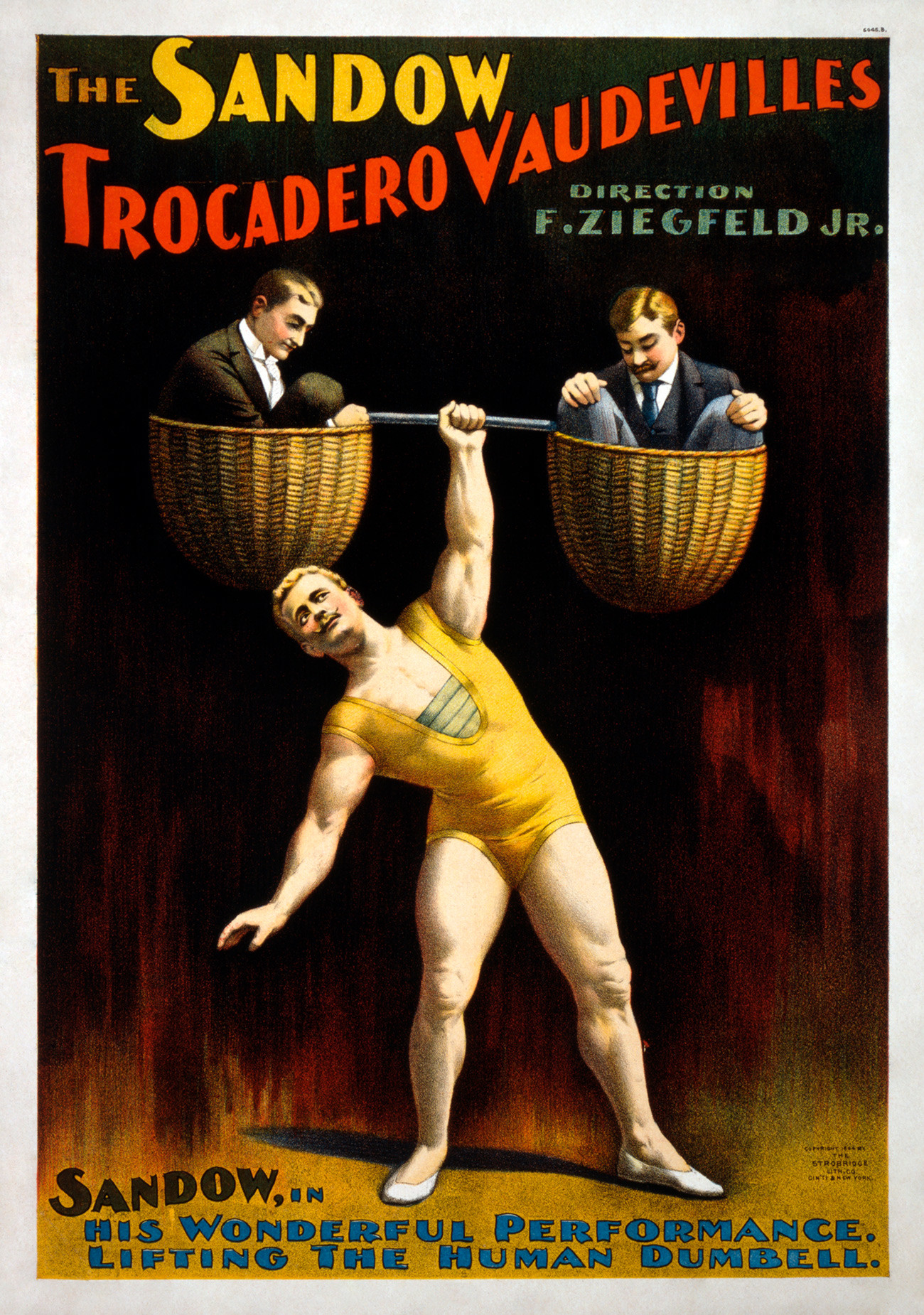 The athlete's tricks of strength were amazing. Eugen could do several hundred press-ups in a row, he could perform back-flips while holding two 60lbs (27kg) weights in his outstretched hands, support the weight of three horses on a platform on his chest, and lie down on his back and get up again holding a 250lbs (115kg) barbell.

Despite his impressive achievements, it is unlikely that the name of Eugen Sandow would have survived to this day had he remained a circus strongman. In the event, the athlete's ambitions went much further.

In 1897, when he was 30, Eugen launched one of the world's first lines of nutritional supplements for sportsmen and published a monthly sports magazine. The Sandow brand name also featured on sporting equipment and - difficult though it may be to believe today - even on cigarette packets (although the athlete himself, of course, advocated a healthy lifestyle). 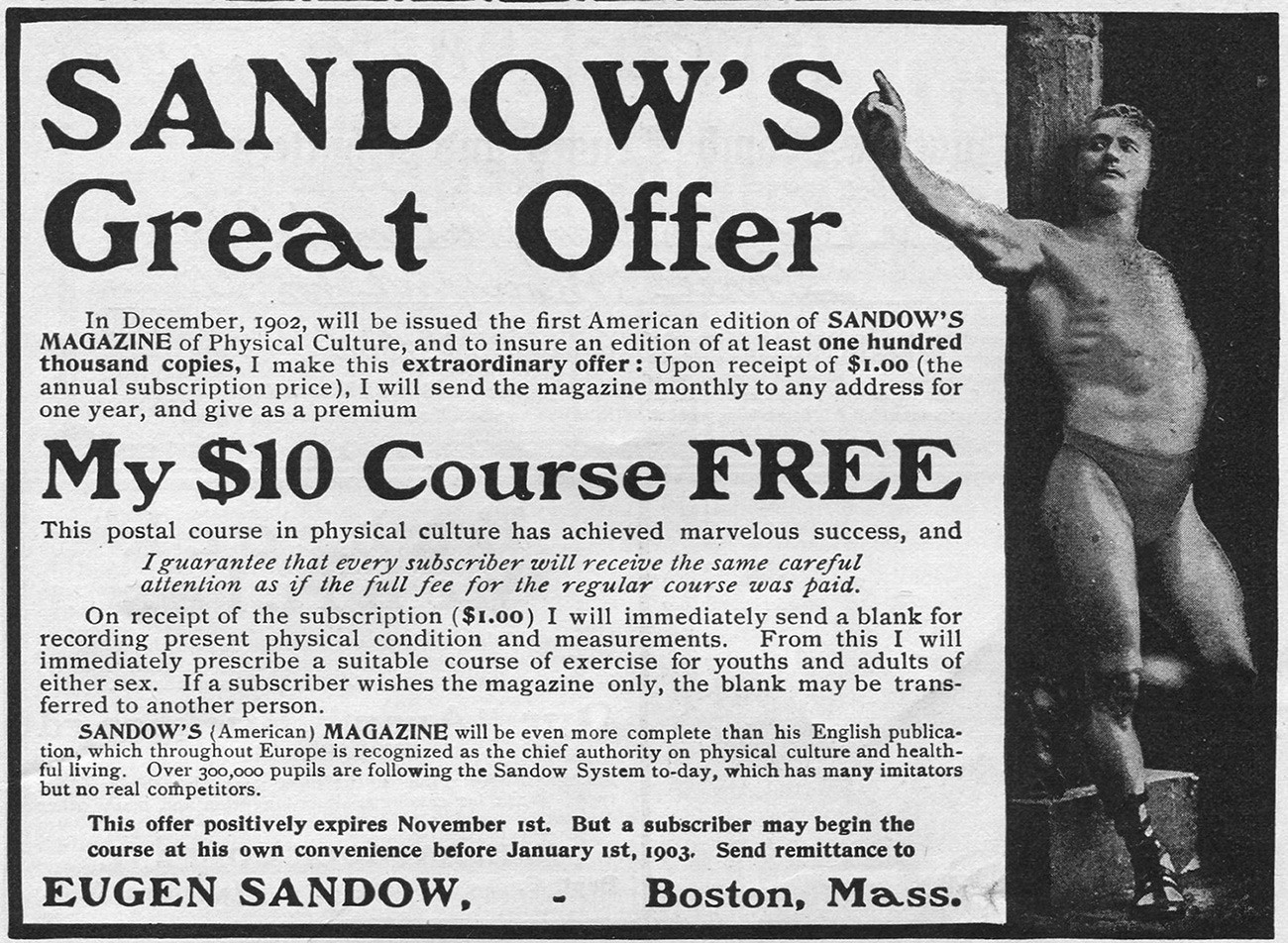 The talented businessman opened a chain of fitness clubs, both for ordinary people and more affluent enthusiasts of physical exertions. The posh clubs had thick Persian carpets, gilded mirrors and sports equipment in aristocratically white finishes.

Sandow's gyms sprang up in Britain, New Zealand, South Africa and Japan. They actively promoted a set of exercises devised by Eugen for all ages - the so-called Sandow System, interest in which survives to this day.

Friend of Writers and Royals

Hard though it is to believe, the creator of Sherlock Holmes and the circus strongman from East Prussia were very close friends. For many years, Sir Arthur Conan Doyle practised Sandow’s System, and, together with the sculptor Sir Charles Lawes, the three men were judges at the world's first competition to find the most perfectly developed body in 1901, more than 60 years before the first Mr Olympia arrived on the scene. 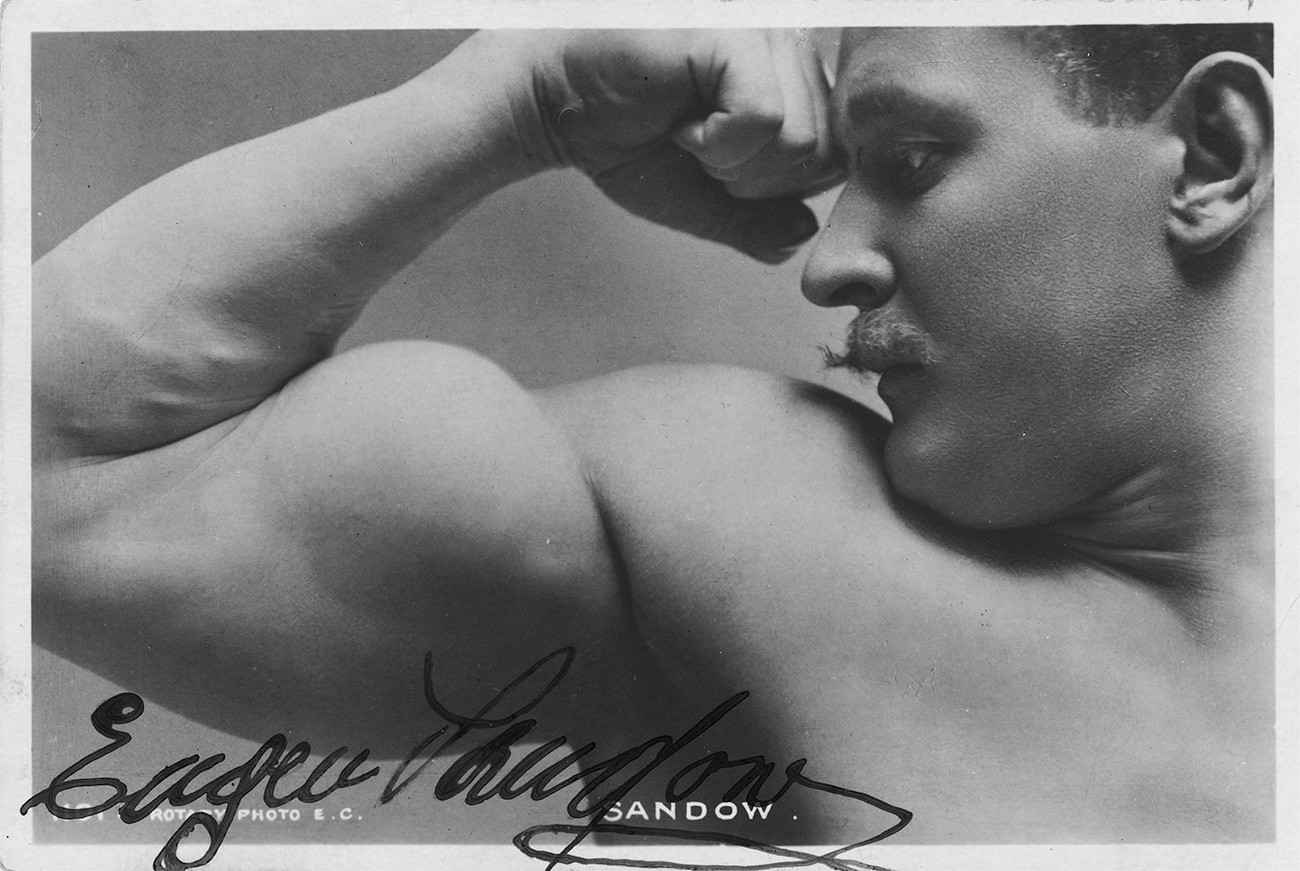 Eighty participants from all over Britain, dressed in leopard skins, gathered in the Royal Albert Hall in London to find the best bodybuilder among them. The rules for judging such competitions had not been devised yet, and it was far from easy to choose the winner. After a long selection, three contenders remained.

"The three men were all wonderful specimens, but one was a little clumsy and another a little short, so we gave the valuable gold statue to the middle one, whose name was Murray, and who came from Lancashire," recalled Conan Doyle.

In 1911, Sandow became the personal trainer to the King of England, George V. The monarch awarded him the title Professor of Scientific and Physical Culture. The 44 year-old gave up his career of record-breaking feats and began writing books on bodybuilding.

Eugen Sandow's whole life was to do with extreme displays of strength and his death proved no different. In 1925 he died from what newspapers said was brain haemorrhage several years after allegedly pulling his car out of a ditch with one hand, although his death certificate records the cause of death as aortic aneurysm. His grave, for many years left unmarked, is in Putney Vale Cemetery, London.