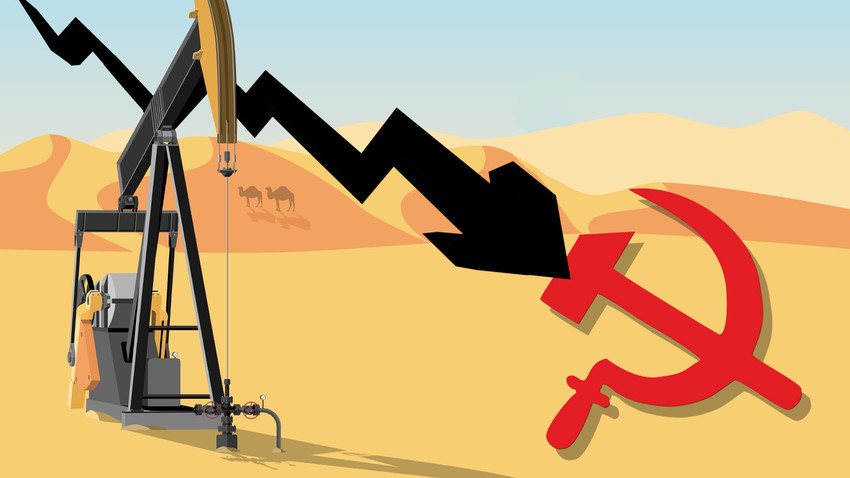 Getty Images, Russia Beyond
Saudi Arabia has recently launched an oil price war that affects the global economy. Previously, the same measures contributed to the collapse of the USSR.

The price for extracting oil has always been, and still is, very low in the countries that are members of the Organization of Petroleum Exporting Countries (OPEC), Saudi Arabia, Iraq, and Iran among them. So, some members of OPEC have always had the option of cutting or increasing the prices of their petroleum products on world markets to influence the global economy. Saudi Arabia, as the undisputed leader of petroleum extraction, has already exercised this option in the past – and on one occasion that policy helped bring down the Soviet Union. 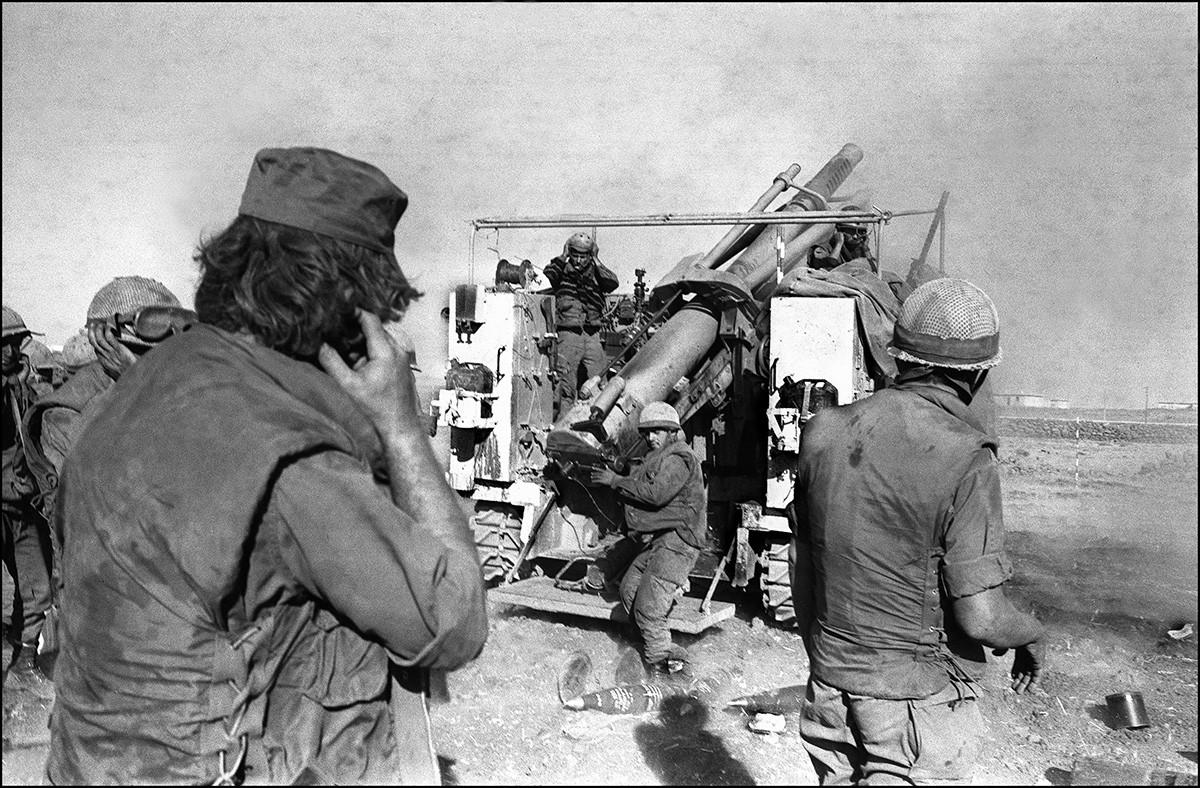 Israeli soldiers plug their ears as they fire shells from a French-made 155mm Howitzer gun at the Syrian lines on the Syrian Golan Heights, two weeks after the beginning of the Yom Kippur War, 17 October 1973.

The current drop in oil prices is still nothing compared to the drop of 1973. On October 17th that year,  the whole Organization of Arab Petroleum Exporting Countries (OAPEC), backed by Egypt and Syria, stopped selling petroleum to countries that supported Israel in the Yom Kippur War against Egypt and Syria.  These countries were Canada, Japan, the Netherlands, the United Kingdom, and the United States. The embargo was accompanied by gradual monthly production cuts – by December 1973, OAPEC’s production was a quarter of September 1973 levels.

In 1973, US oil production was just 16.5% of global output; the country was a major importer of oil. Although the US and other countries targeted by OAPEC’s decisions were serious customers, the low costs of extraction for OAPEC countries allowed them to preserve their balance of payments even without selling to the US, UK, and others. OAPEC’s 1973 decision triggered a global recession and economic crisis. By the end of the embargo in 1974, the price of oil had risen from $3 barrel to $12 barrel, and in the US, it was even higher. 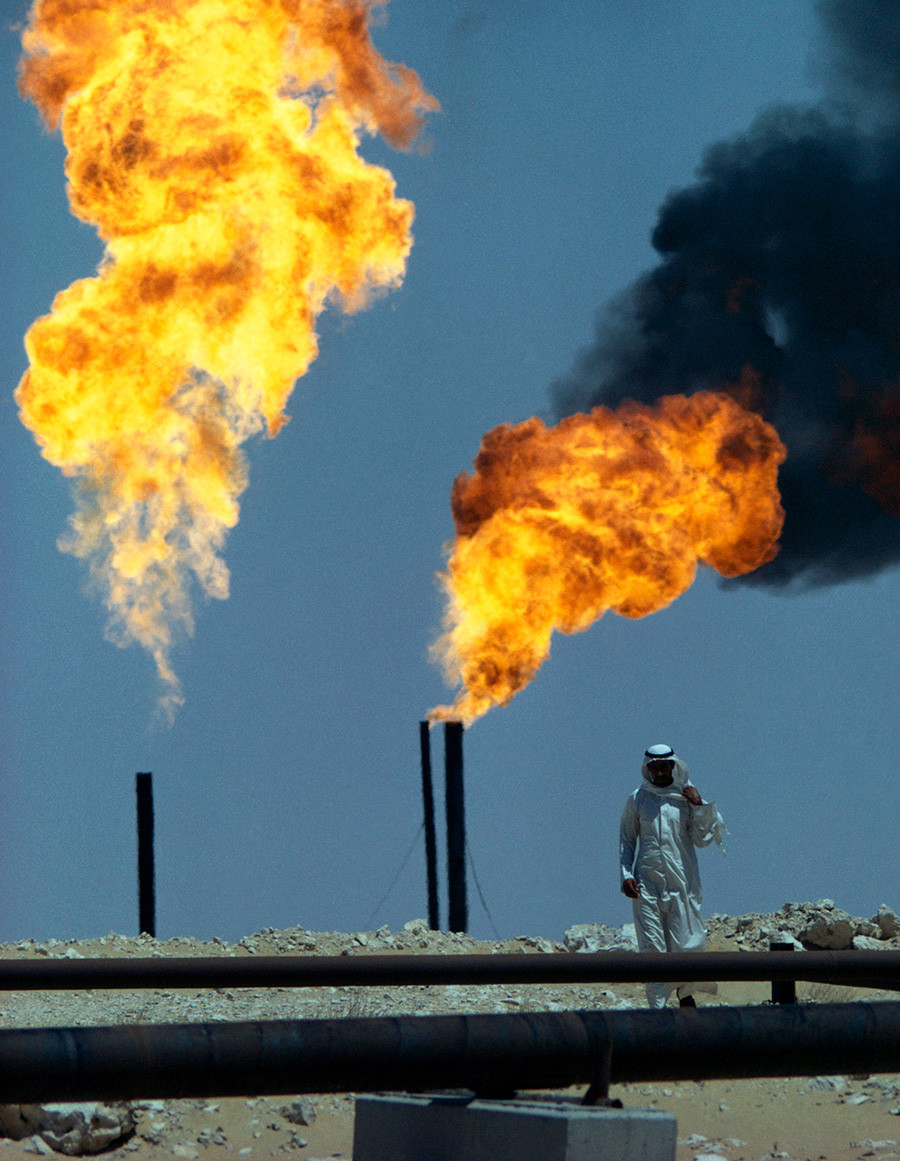 The Saudi sheiks prospered and quickly gained enormous wealth. This situation was also highly beneficial for the USSR, which increased its oil and natural gas extraction and quickly became one of the world’s leading oil and gas producers: oil and gas income now made up more than half of the national income.

Meanwhile, in the US, unemployment rates doubled, and GDP dropped by 6%. But the United States was preparing a counter move by persuading Saudia Arabia to act in US interests.

How the US won the Cold War 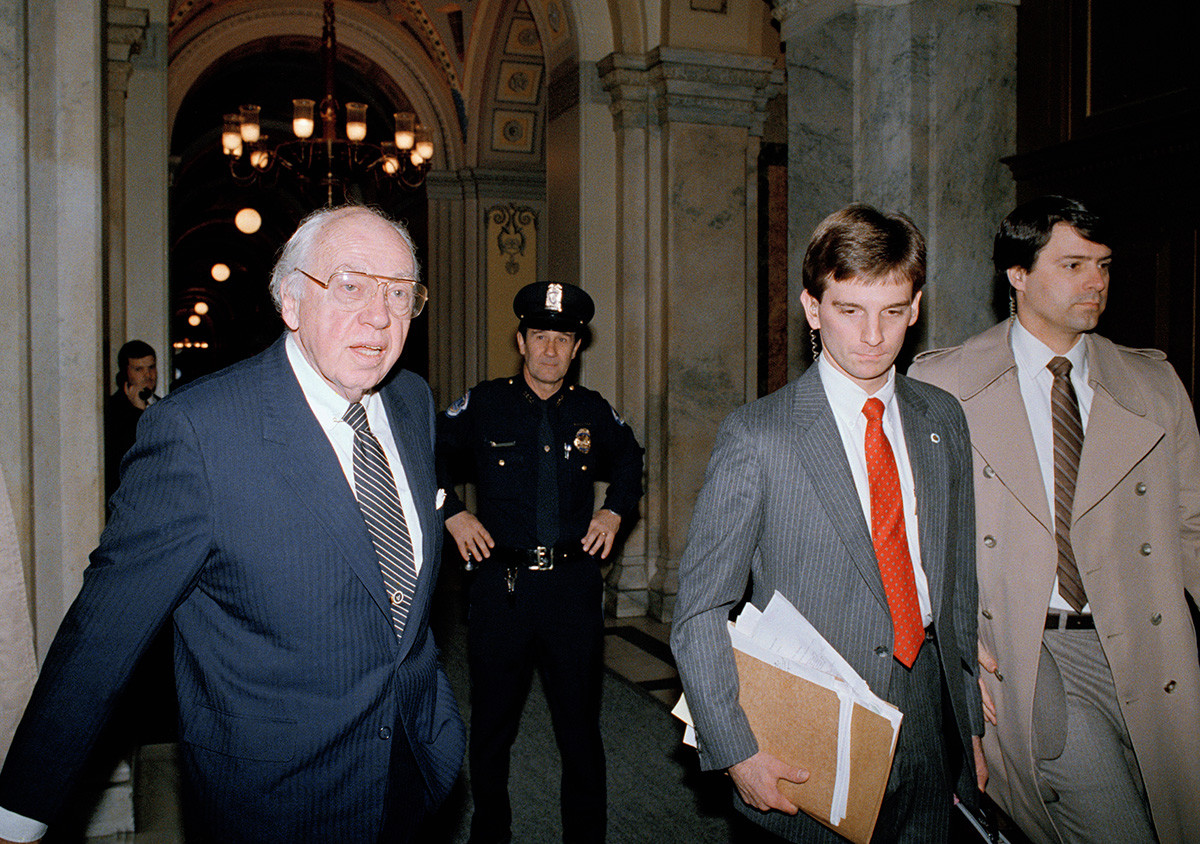 The 1973 crisis had long-term consequences. Japanese automobiles that could do double the number of miles on a single tank of gas became market leaders, while the US and other Western countries started looking for new oil deposits and improved extraction techniques. Meanwhile, the USSR was still making huge profits, selling its oil.

In 1979, the Islamic Revolution in Iran caused a severe cut in oil production there. This led to a further rise in global oil prices. The Iran–Iraq War that began in September 1980 only exacerbated the situation. But by the beginning of the 1980s, the joint efforts of the US and other ‘first-world’ countries had paid off: oil prices started dropping because of overproduction. In 1981, the US administration dropped the state price control for oil and oil products, at the same time lowering taxes. The prices dropped continuously from 1980 onward. 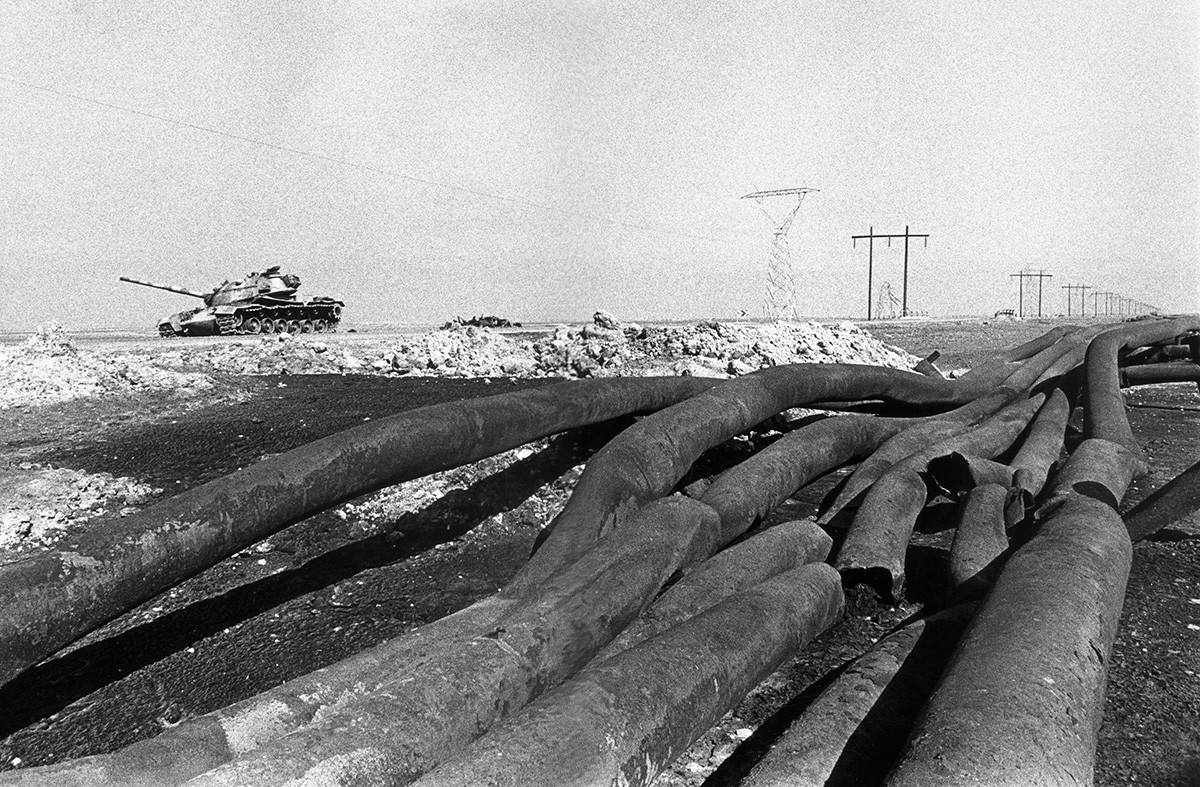 Abadan, Iran: A view of oil pipelines destroyed by Iraqi bombings during the Iran-Iraq war, in Abadan, south Iran, 1981.

In such conditions, all countries, including the USSR, started working on alternative energy sources, including nuclear power. In 1986, the Chernobyl disaster happened. It is still disputed whether the reason behind the disaster was the demand of the USSR administration to increase the plant’s power output, but the disaster delivered a strong blow to the USSR’s economy, international image, and energy industry.

Shortly after that in 1986, William Casey, then Director of the US Central Intelligence Agency, went to Saudi Arabia. According to Ronald Reagan’s national security adviser Richard Allen, Casey negotiated with King Fahd what was to occur next. For the six previous years, the Saudi government has been restraining oil prices, sharply decreasing their petroleum extraction; but after Casey returned, in September 1985, Saudi Arabia started rapidly increasing its extraction – even though the prices were still low! 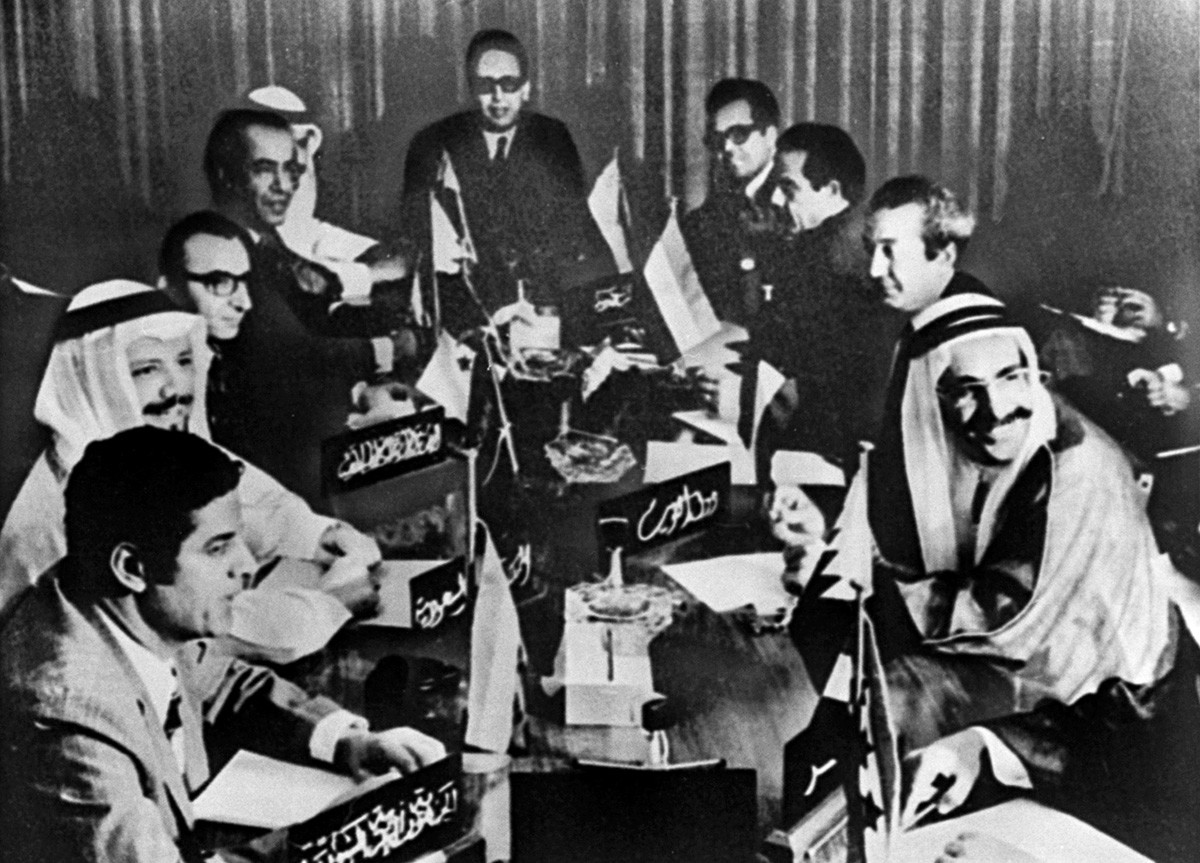 An unidentified group of ministers of Arab oil nations opens a conference in Kuwait on Oct. 17, 1973. The Arab oil nations, joined by Egypt and Syria, met to discuss the use of oil as a weapon against the United States in the Middle East war.

In four months, Saudi extraction rose from two million to 10 million barrels a day, and prices plummeted from $32 a barrel to $10. For the USSR’s economy - already accustomed to exorbitant incomes from its oil, this was a death blow. in 1986 alone, the USSR lost more than $20 billion (approximately 7.5% of the USSR’s annual income), and it already had a budget deficit.

But Saudi Arabia’s economy was also punished because of the low prices! Why did they do it? Allen’s opinion is that Casey offered the sheiks financial reparations in exchange for the move; this opinion is backed up by the fact that in 1986, 80% of Saudi oil was sold through Exxon, Mobil, Texaco, and Chevron – all American companies.

The Soviet Union plunged into recession following the 1985-1986 oil crisis. It was enough for the already unhealthy, command-style Soviet economy to crumble. In 1986, USSR’s external loans were about $30 billion; by 1989 they had reached $50 billion. 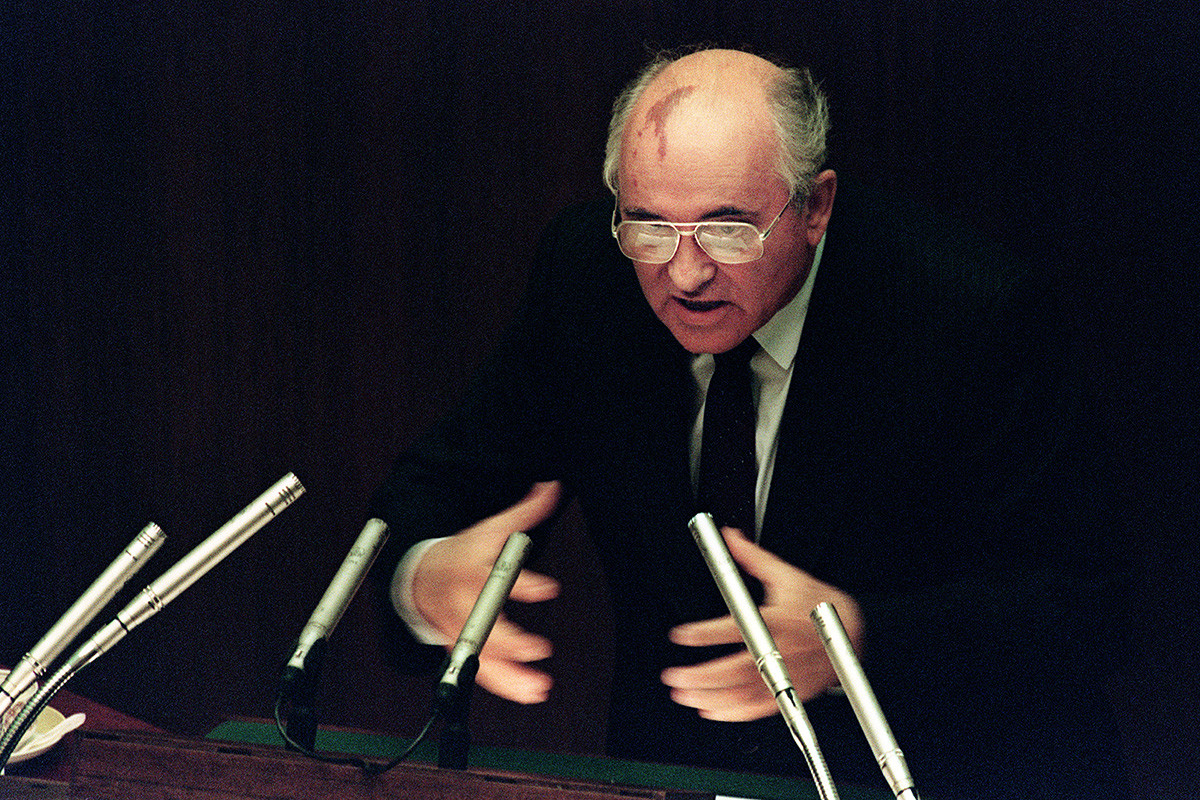 Soviet President Mikhail Gorbachev stresses a point on the second day of the extraordinary session of the Supreme Soviet in Moscow on August 27, 1991. Gorbachev threatened to resign if the republics refused to sign a Union Treaty to hold the Soviet Union together.

Saudi Arabian oil prices gradually recovered until the early 2000s when they finally reached profitability again, but the Saudi government didn’t seem to care much, as they likely had massive sovereign funds saved from the hyper profitable 1970s. The US predictably profited: in 1986, American gas stations even gave away free petrol for advertising.

The oil crisis significantly helped the US win the Cold War against the USSR: the economic recession led Mikhail Gorbachev to make hugely unpopular political decisions. An attempt to reform the governmental system (known as Perestroika) was largely hopeless due to the lack of funds. Gorbachev’s populist rhetoric didn’t play well with an impoverished population. They demanded responsibility for the government’s short-sighted actions, and that’s when Boris Yeltsin came in with his harsh critique of the Soviet system at large. By the end of the 1980s, the collapse of the Soviet Union was all but inevitable.