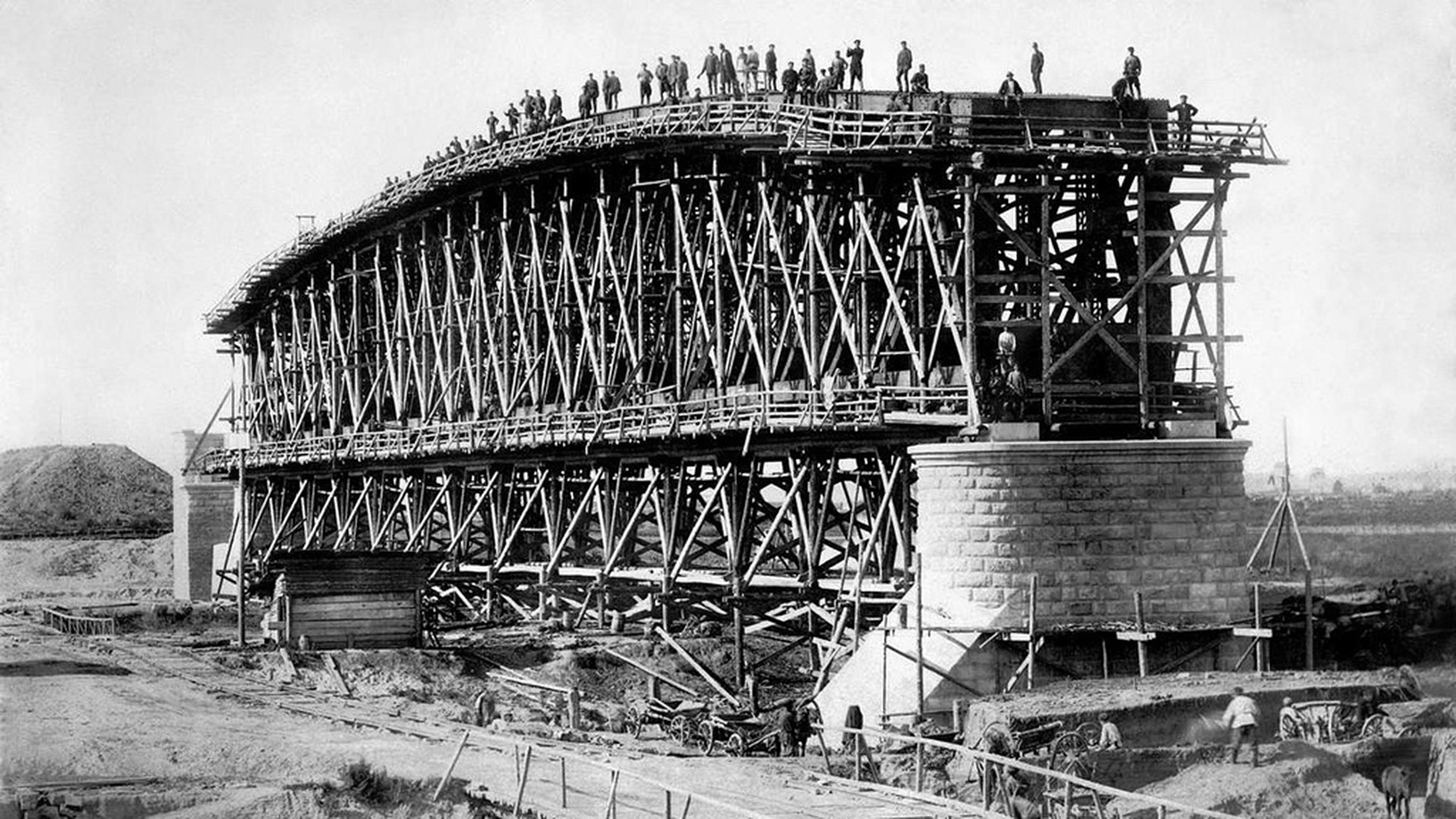 The State Museum of the South Ural History
The country’s sheer size called for construction projects on an equally gigantic scale, be it bridges, residential buildings or industrial facilities.

1. In 1862, a railway was laid from Moscow to Kolomna, a town not far from Moscow. Since then, the old town of Kolomna, which has its own kremlin, became an industrial center, with a steam locomotive plant and a large bridge over the Oka River. 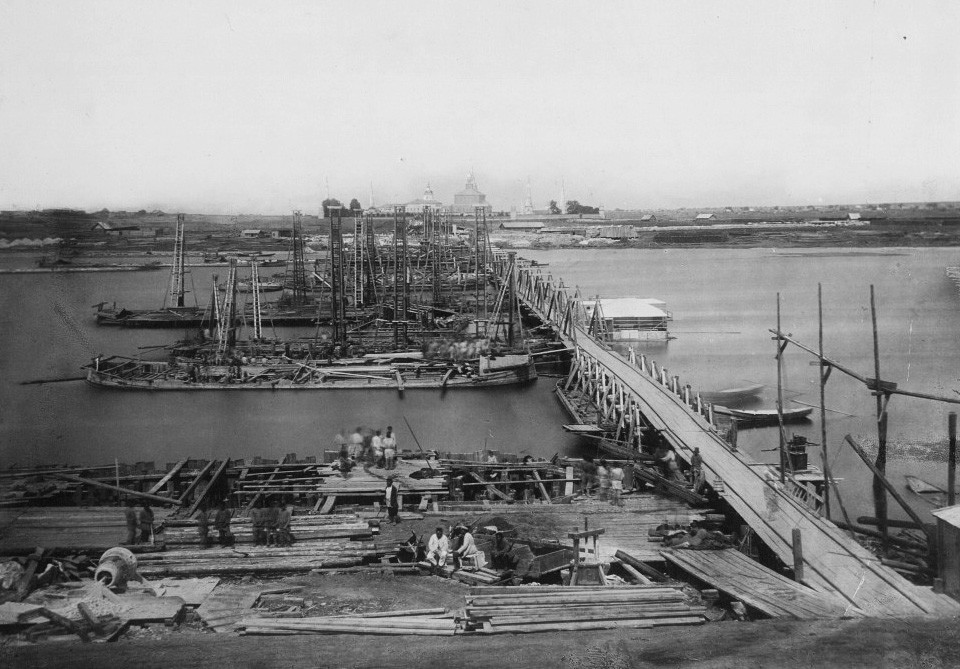 2. The Trans-Siberian Railway was one of the biggest construction projects in the Russian Empire. In this photo, workers are building a bridge along the Urals section of the railway line. Its construction lasted from 1885 to 1899. 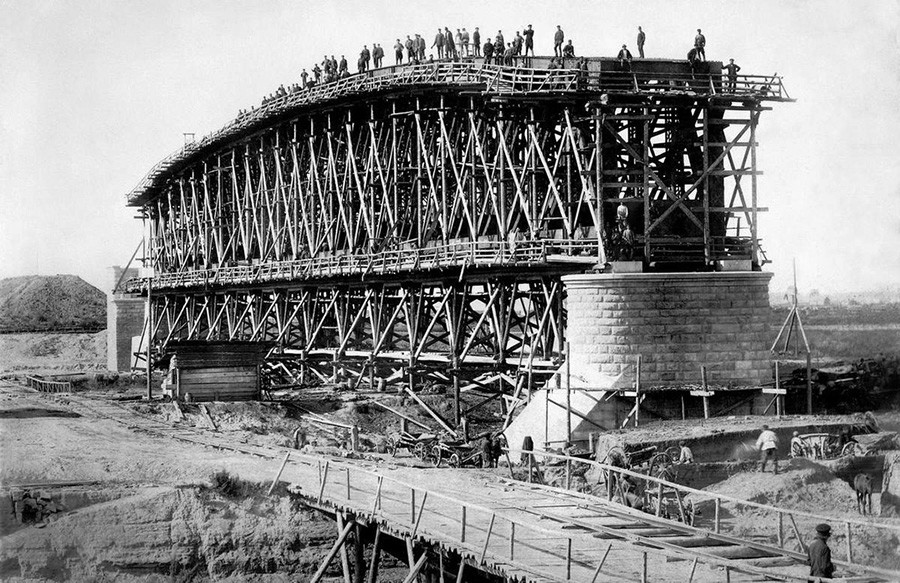 3. The White Sea-Baltic Canal was built in record time: 227 km in less than two years (1931-33). It also became one of the most infamous construction projects in Soviet history, as it had claimed the lives of some 12,000 Gulag prisoners who had been building it. 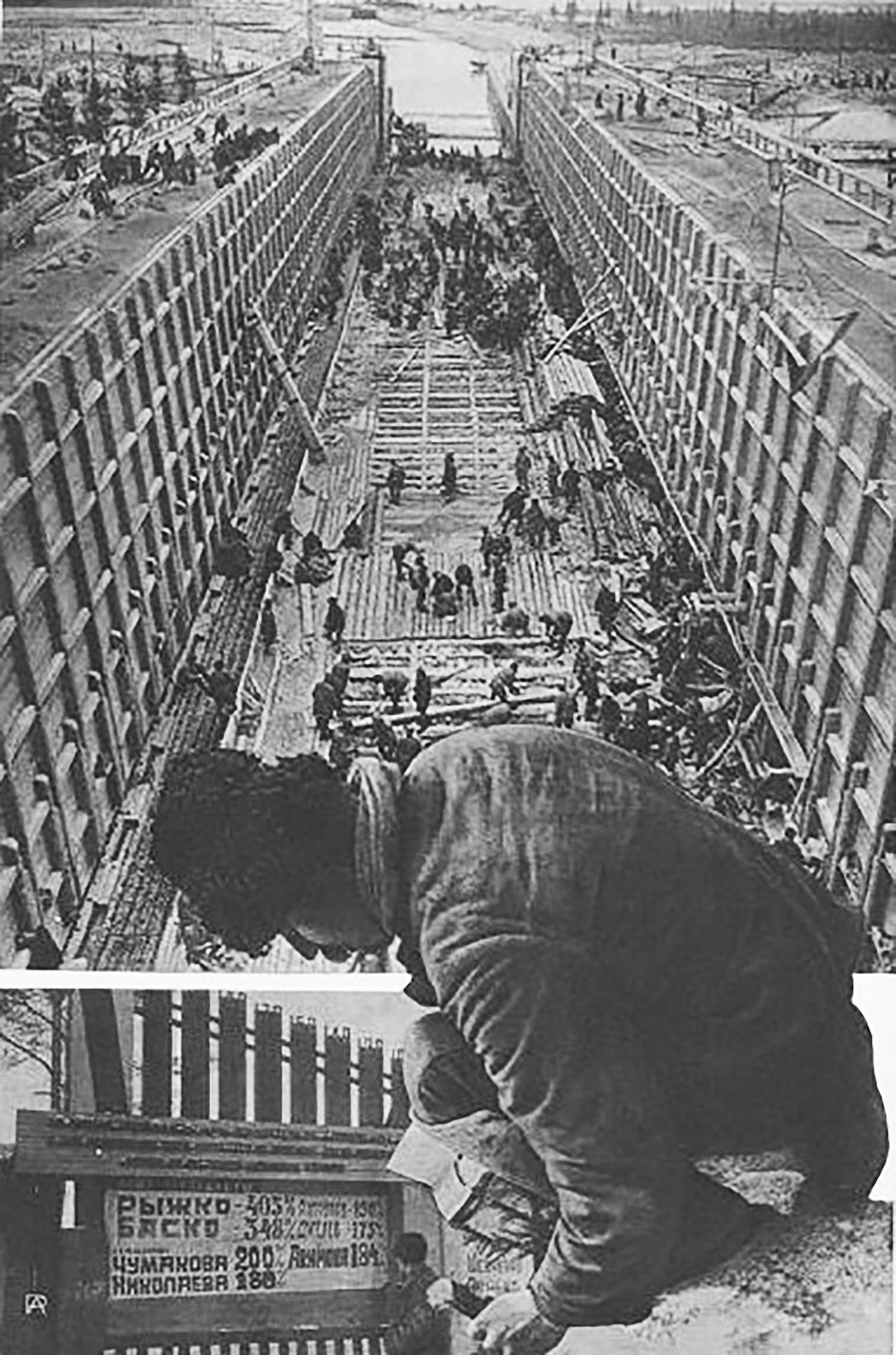 Photo for The USSR under Construction magazine.

4. One of the Soviet Union’s first hydroelectric power plants was built on the Dnieper River. Its construction began in 1927, and Soviet authorities purchased some foreign equipment for the plant. Several of its units were commissioned, but during World War II, when the Soviet troops were retreating, the NKVD (secret police) decided to blow the power plant up. It was restored only after the war. 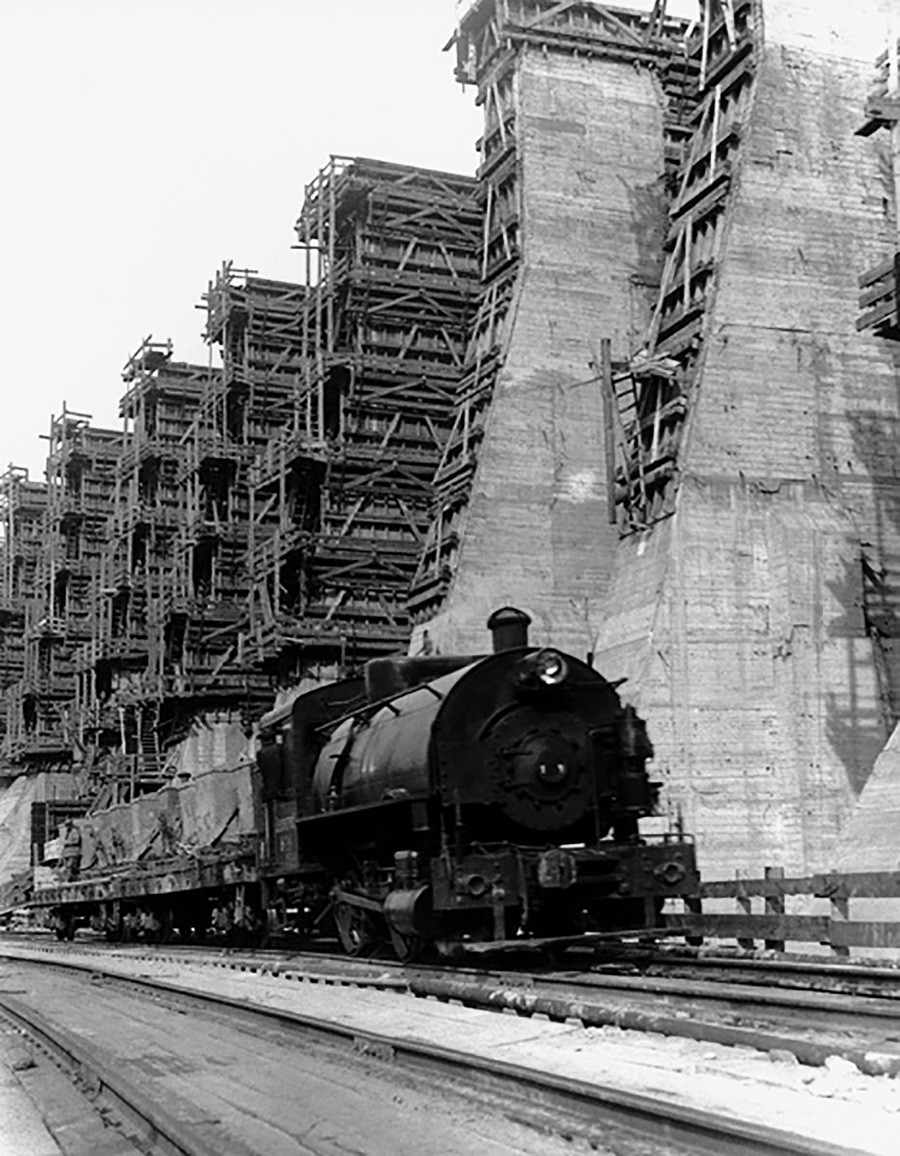 5. The first line of the Moscow Metro was built in the 1930s, but its large-scale expansion was carried out only after the war, in the 1950s. One of the most ambitious projects was the Metro Bridge across the Moskva River, which linked the Luzhniki Embankment and Moscow State University to the center of the city. 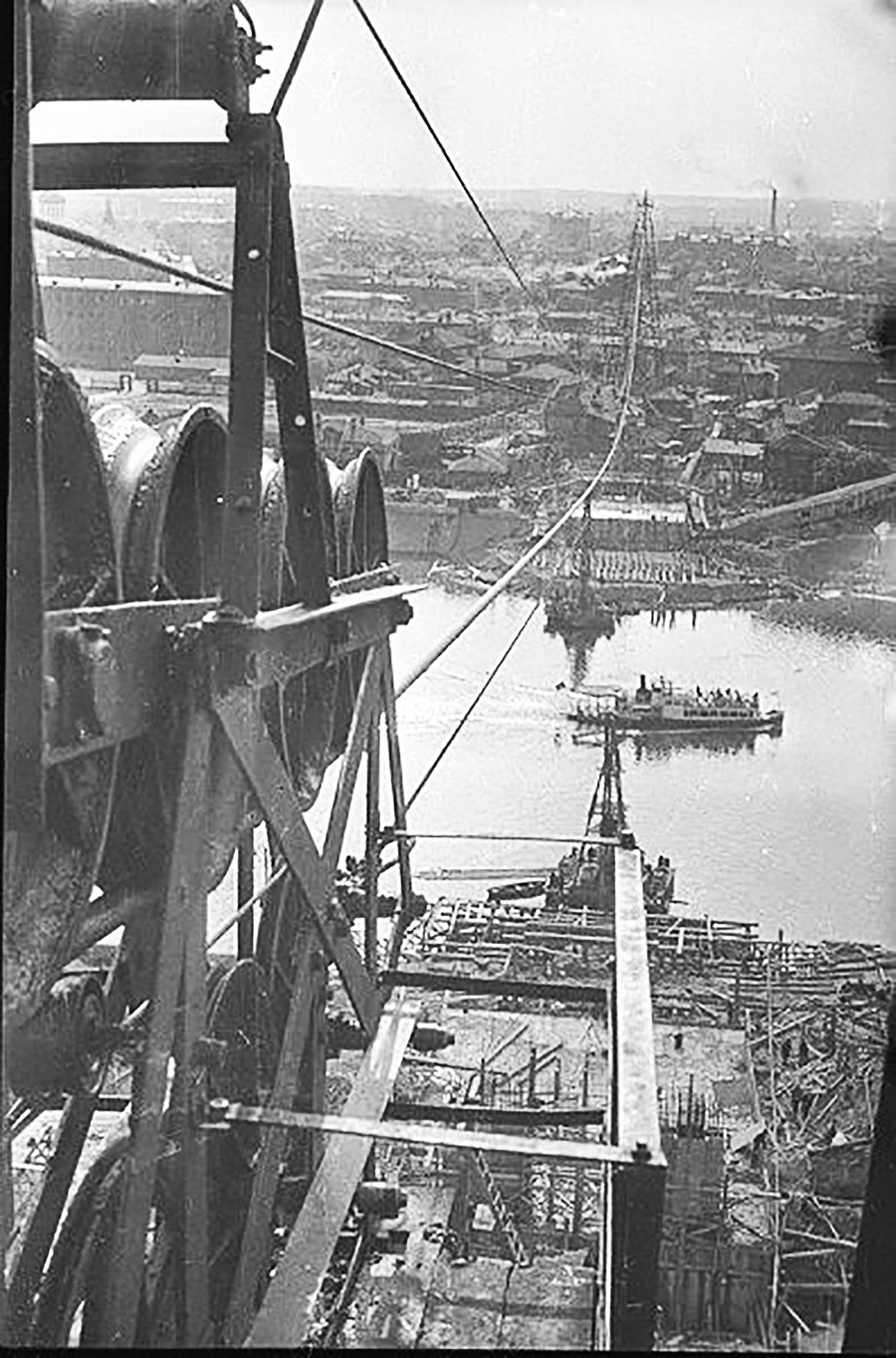 6. The famous Seven Sisters buildings were Moscow's main construction projects of the 1950s. The original plan was to have nine of these buildings, but in the end, only seven were built. The left photo depicts the construction of the Kotelnicheskaya Embankment Building, while the photo on the right shows the building of Moscow State University. 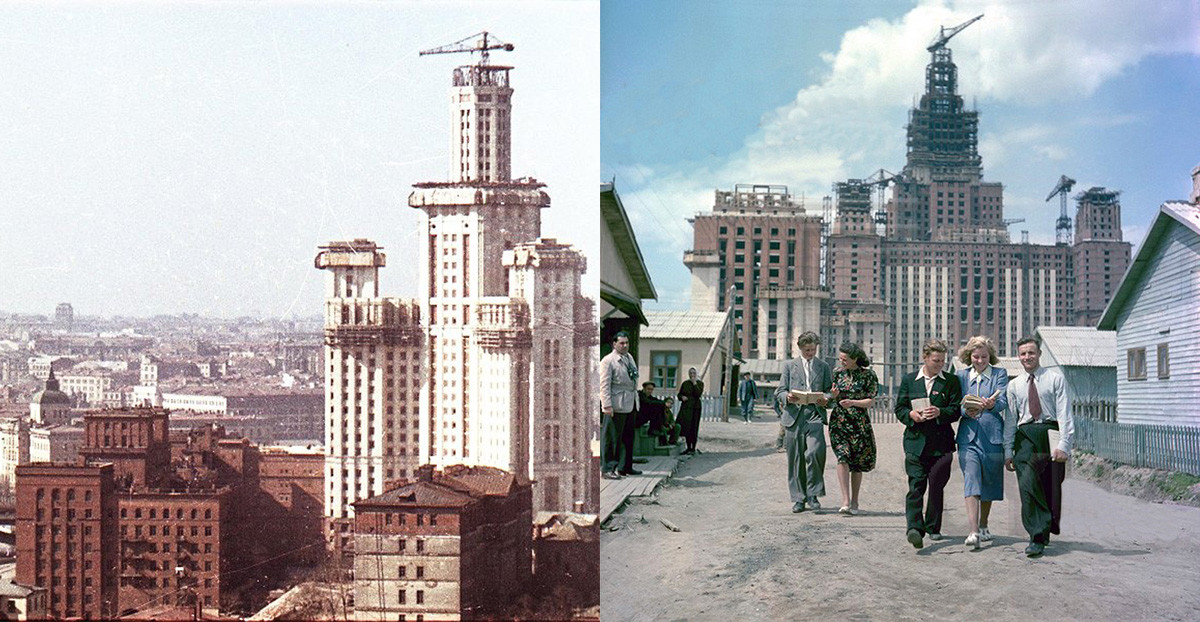 7. The scene in this photo looks like the construction of the Egyptian pyramids, but in fact, it depicts the construction of the Great Fergana Canal. The canal was key for the irrigation of vast cotton plantations in the Uzbek, Kyrgyz and Tajik republics, which at that time were part of the USSR. In 1939-40, some 160,000 collective farm laborers worked on that construction site. 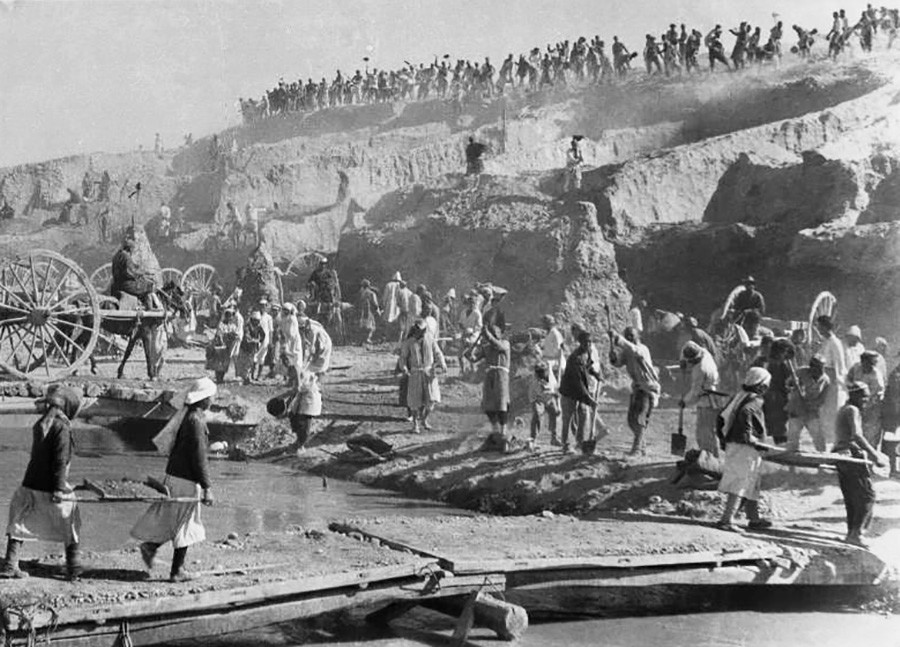 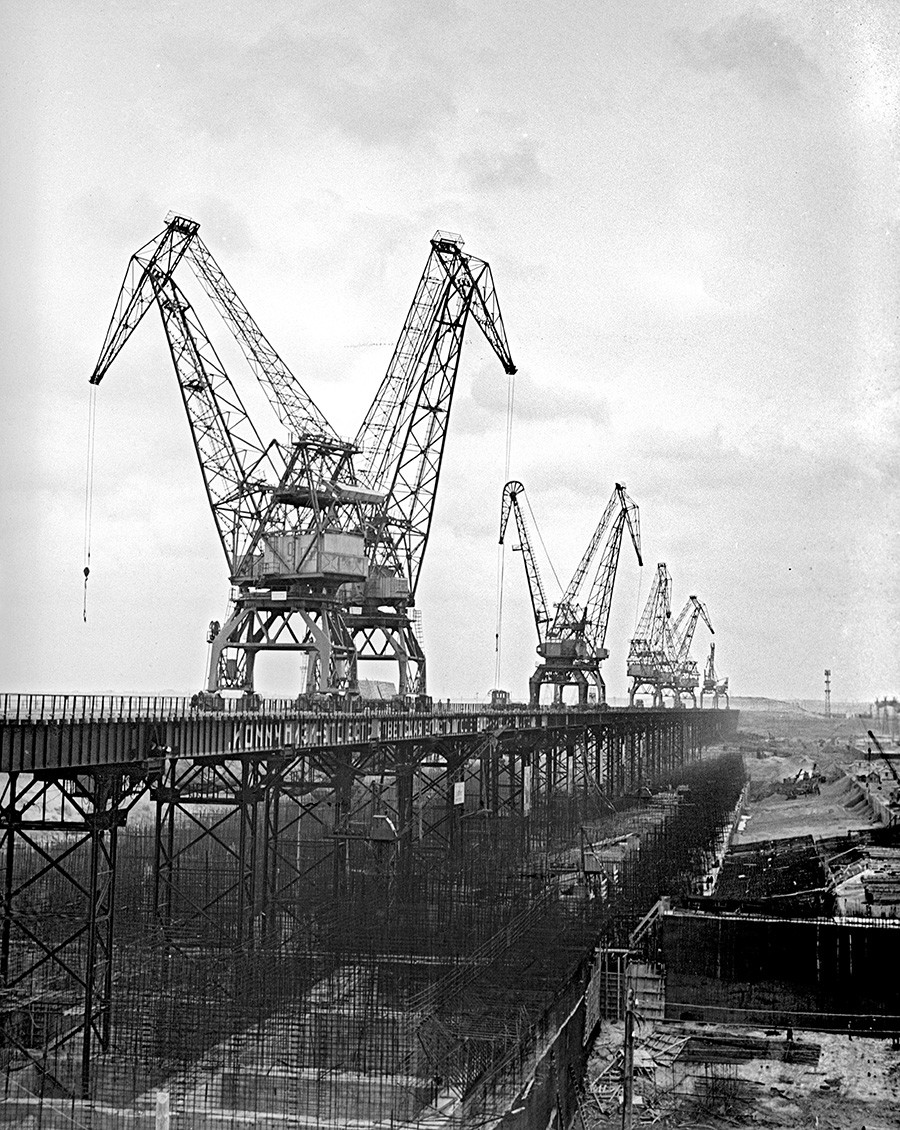 9. This photo shows the construction of the famous Bratsk Hydroelectric Power Station on the Angara River. When it was commissioned in 1961-66, it was the most powerful hydroelectric power station, not only in the USSR, but throughout the world. But in 1971, it was outdone by another Soviet hydropower plant, the Krasnoyarsk one, on the Yenisei River. 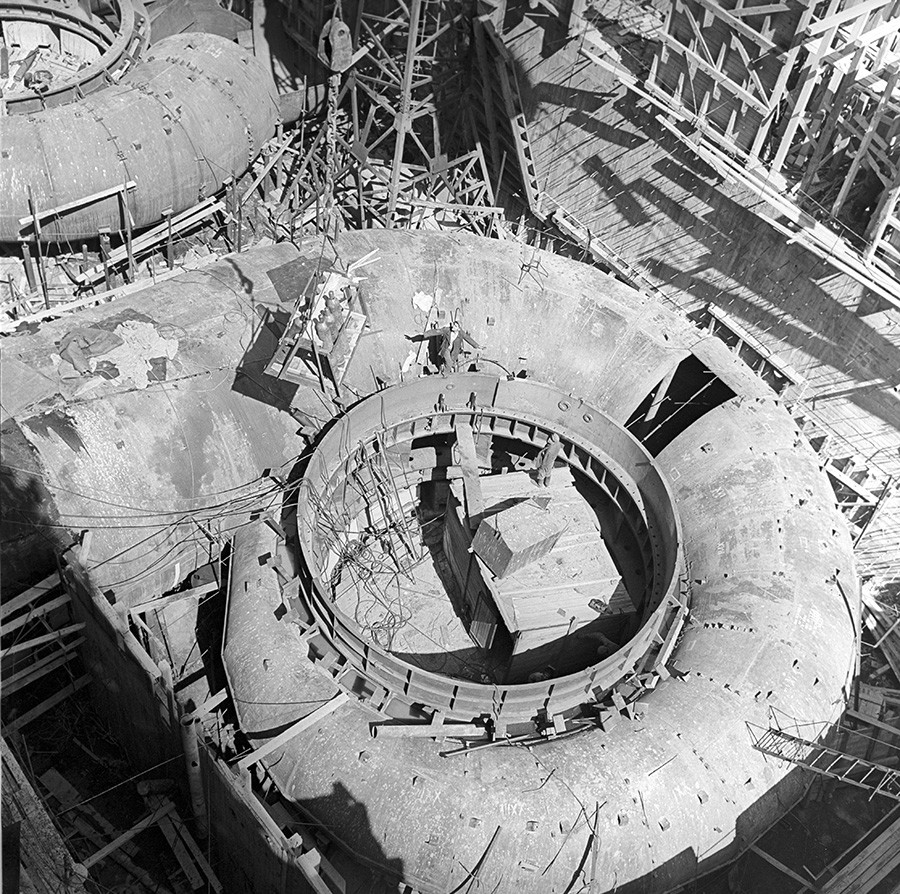 10. In 1935, Stalin approved a Master Plan for the Reconstruction of Moscow, which envisaged the construction on a massive scale of residential buildings, the metro, as well as the expansion of existing streets and the laying of new avenues. For example, on Tverskaya Street in the very center of the city, whole buildings even had to be moved! Whereas Kalininsky Avenue (now Novy Arbat) was laid in the early 1960s, already after Stalin’s death. 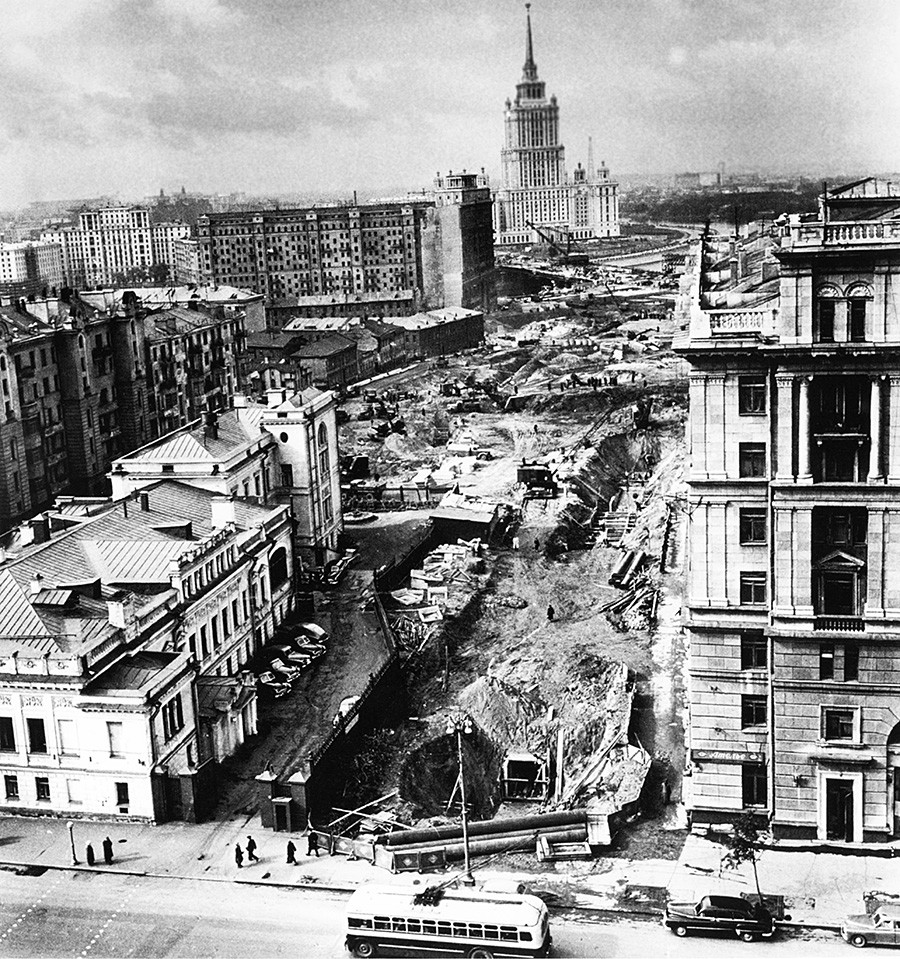 11. The Sayano-Shushenskaya Hydroelectric Power Station on the Yenisei River is currently the largest in Russia. Its construction began in the Sayan Mountains in 1963, and was completed only in 2000. This photo below dates back to 1972. 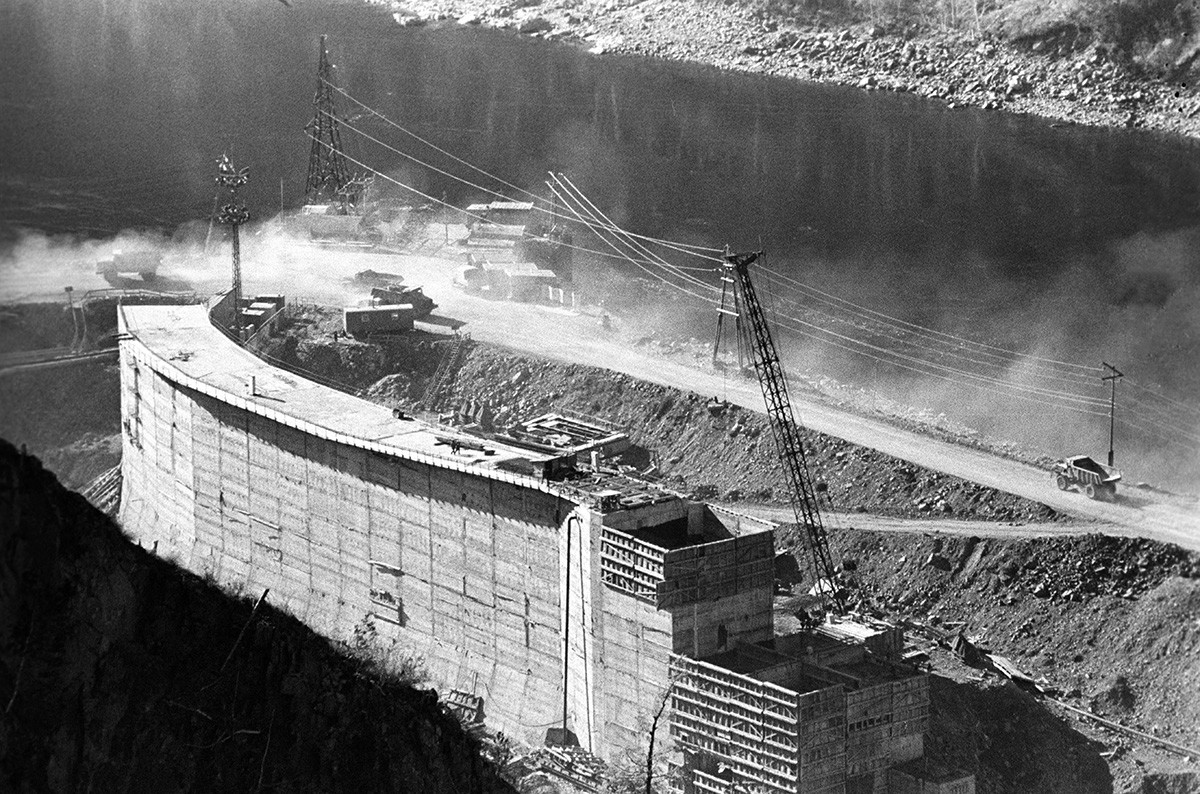 12. The Baikal-Amur Railway in the Russian Far East is one of the longest in the world: 4,300 km in total. Its construction lasted from 1932 to 1984! The photo below shows the project already in its final stages. Initially, a Gulag department was set up for the construction of the railway, and about 160,000 prisoners helped build it in extremely harsh weather conditions. 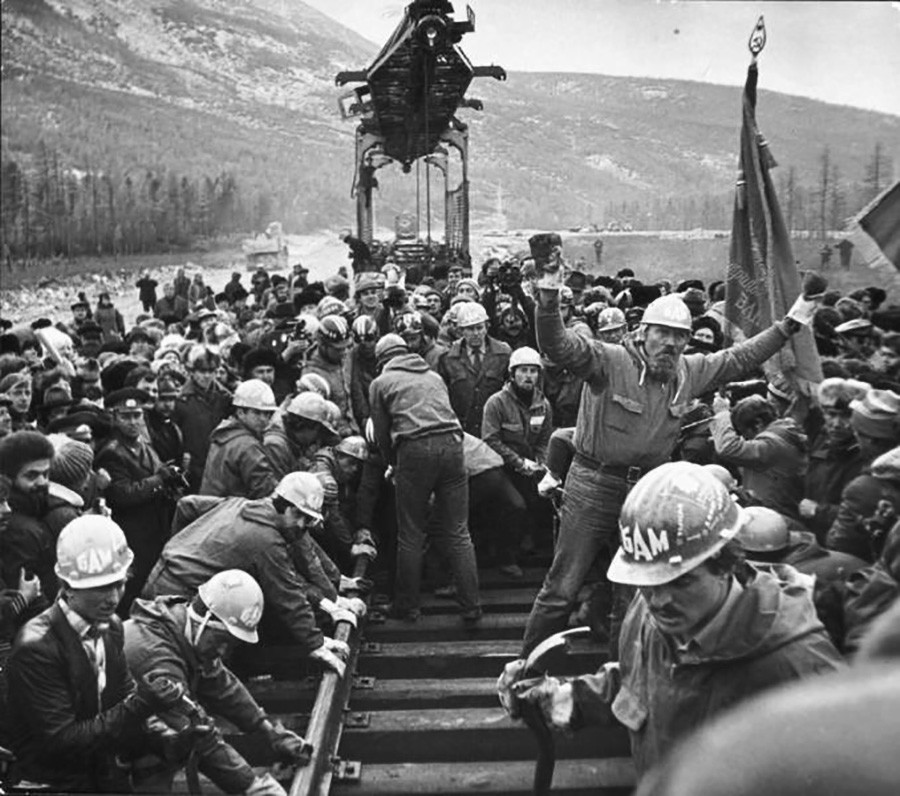