Foreign leaders and celebrities on top of Lenin’s Mausoleum (PHOTOS) 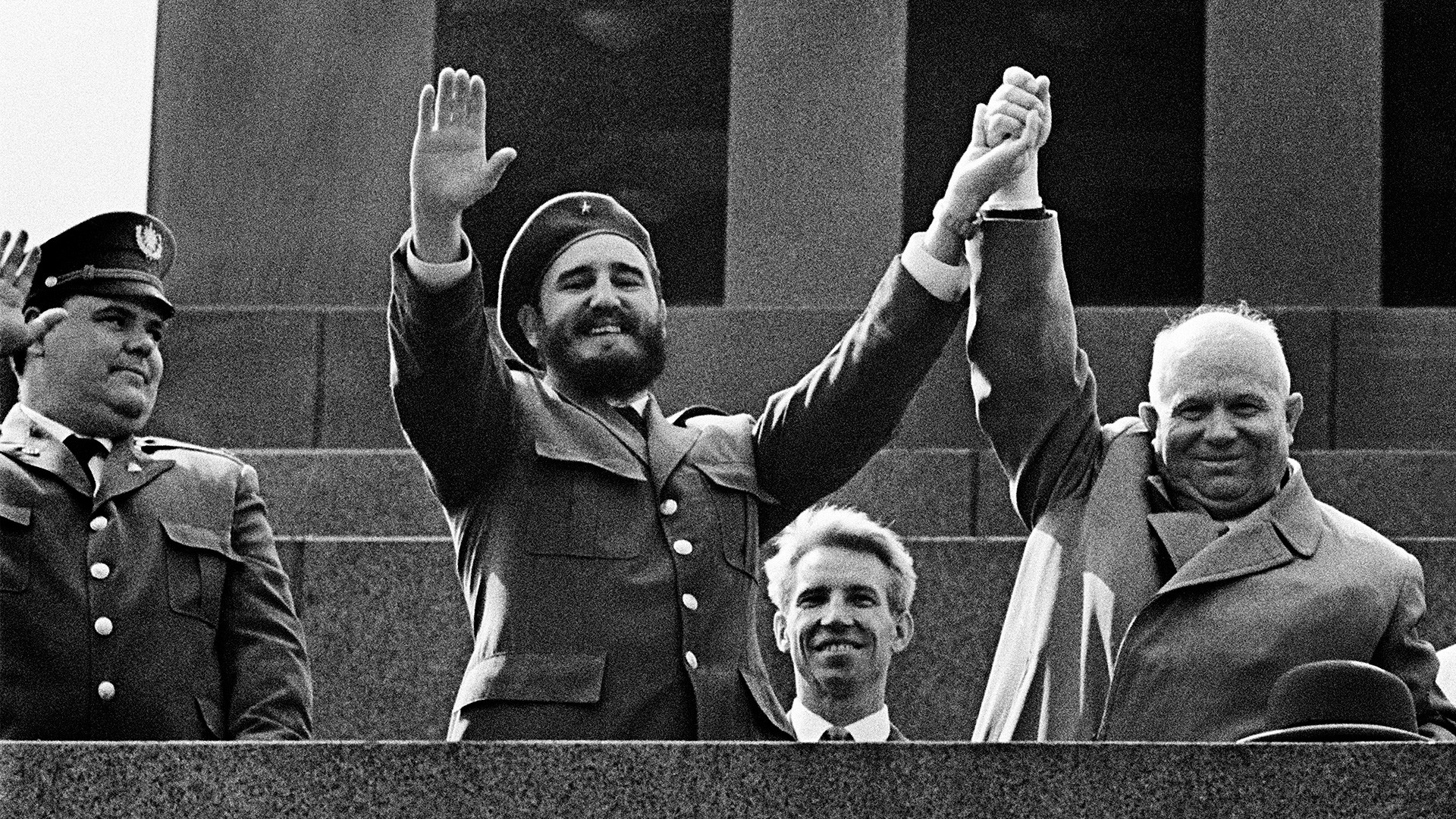 Anatoly Garanin/Sputnik
It was normal for Soviet leaders to appear on the Red Square’s tribune, but who else did they give the ''honor'' of climbing the ‘Soviet Olympus’ to?

The mausoleum of the first Soviet leader, Vladimir Lenin, is certainly the most famous site on Red Square that dates to the communist era. The structure used to act as a tribune for the Communisty Party’s main leaders and heroes. Just like gods climbing Olympus, on major holidays and demonstrations the Soviet elite climbed those stairs and saluted applauding crowds below. Sometimes, however, people not related to the party elite or politics took their place there: national heroes, cosmonauts and even acclaimed writers. Very few foreign honored guests were invited to be on top, but we’ve compiled a list of some of them. 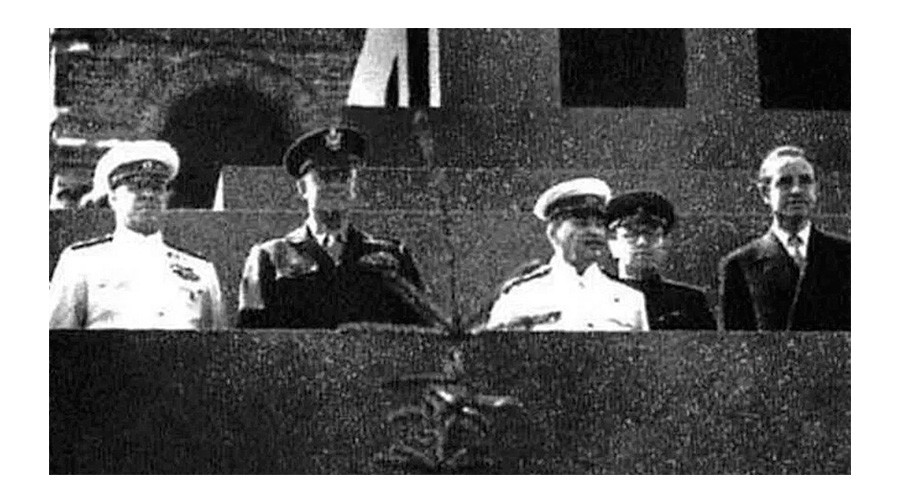 The future U.S. president was invited to visit Moscow for the Victory parade in June 1945, while still an Army general. However, he wasn’t able to attend, though later in July 1945 he joined Stalin in welcoming the Physical Culturists Parade and became the first American official to climb the Mausoleum. Soon after that Soviet-American relations descended into the Cold War and Western leaders were not welcomed in the USSR; for sure not on this main podium of the Communism faith. 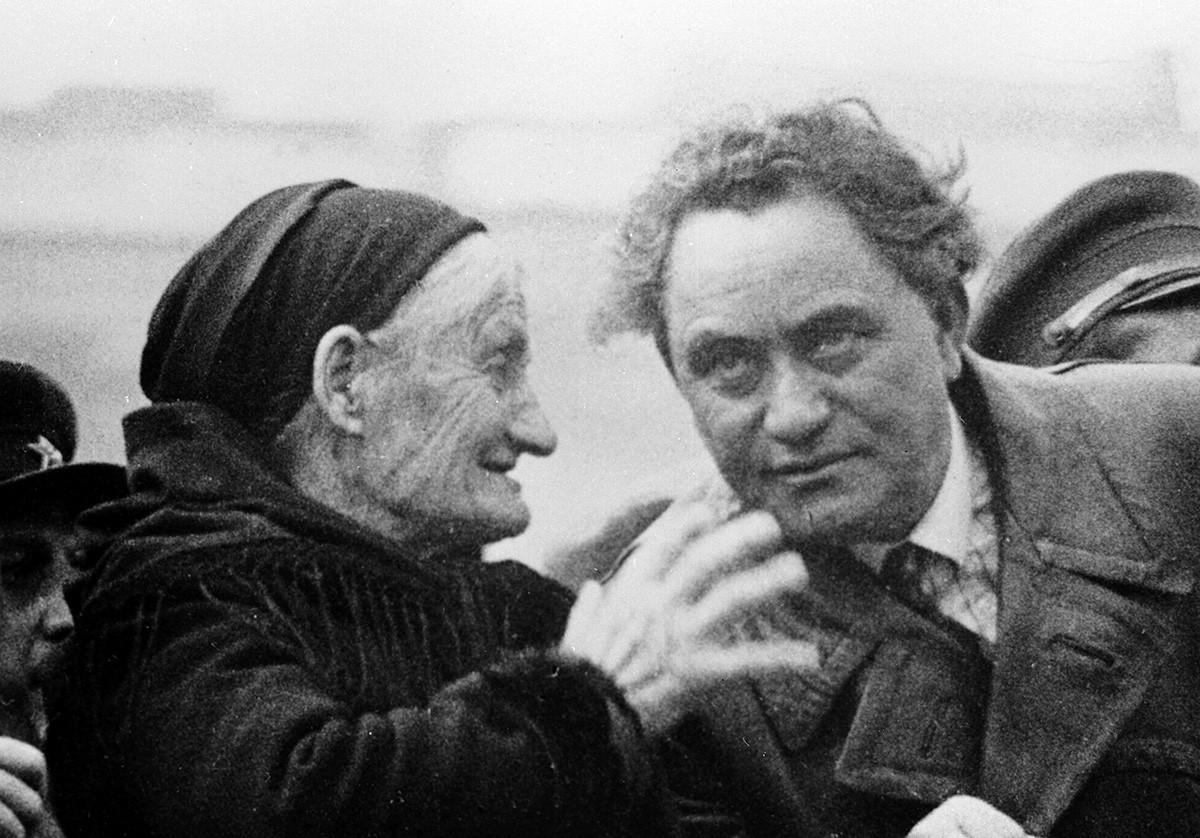 Georgi Dimitrov and his mother

A Comintern member, Dimitrov was sentenced in Berlin and blamed for setting a fire in the Reichstag. While on trial in court he made an impassioned speech supporting Communism against National Socialism, and so he was invited to the USSR and granted Soviet citizenship. He was even called ‘the Bulgarian Lenin’ - and reviewed the Labor Day Parade on Red Square. In the photo he is with his mother. Interestingly, after his death a mausoleum was built for him in Bulgaria. 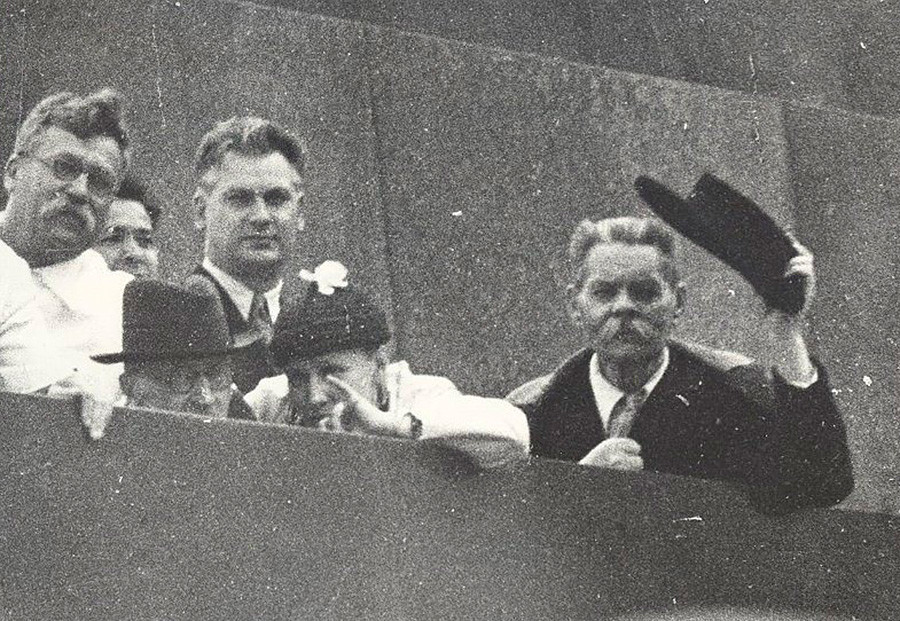 Romain Rolland was one of the USSR's best friends. In 1935, he came to Moscow at Maxim Gorky’s invitation. The French writer guested for a month in his Moscow house, and even had a meeting with Stalin and was absolutely charmed by him. As the most beloved Soviet proletarian author, Gorky was a frequent guest on the Mausoleum tribune, and with Rolland they stood there to welcome the Physical Culturists Parade. Rolland (portrait in a hat) was amazed by the spectacular procession of half-clothed athletes. 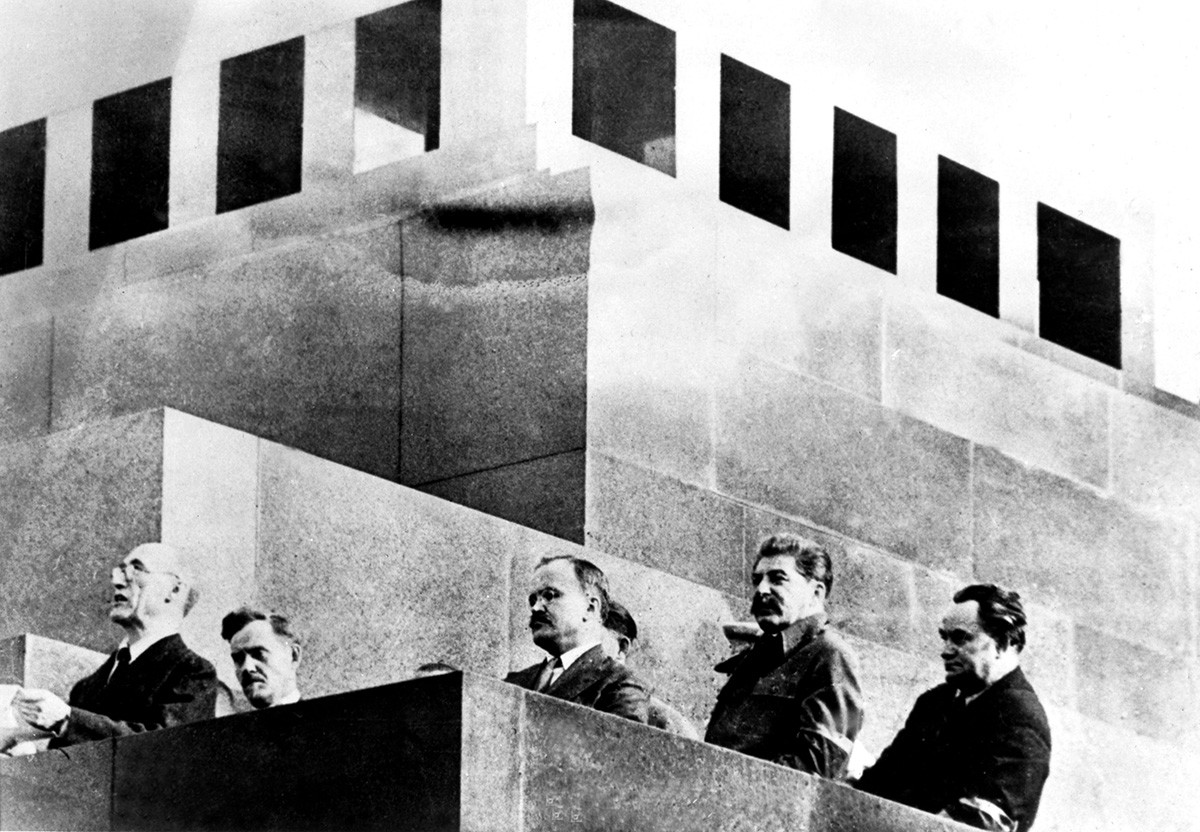 Another Soviet friend, the famous French writer Andre GIde, came to Moscow in 1936. He appeared at the funeral of Maxim Gorky and gave a speech on the Mausoleum. Traveling across the USSR, Gide lost his romantic perception of the country's new regime and of Stalin, and upon returning to France he wrote a negative expose in his nonfiction book Return from the USSR. Eventually all his works were banned from publication in the Soviet Union. 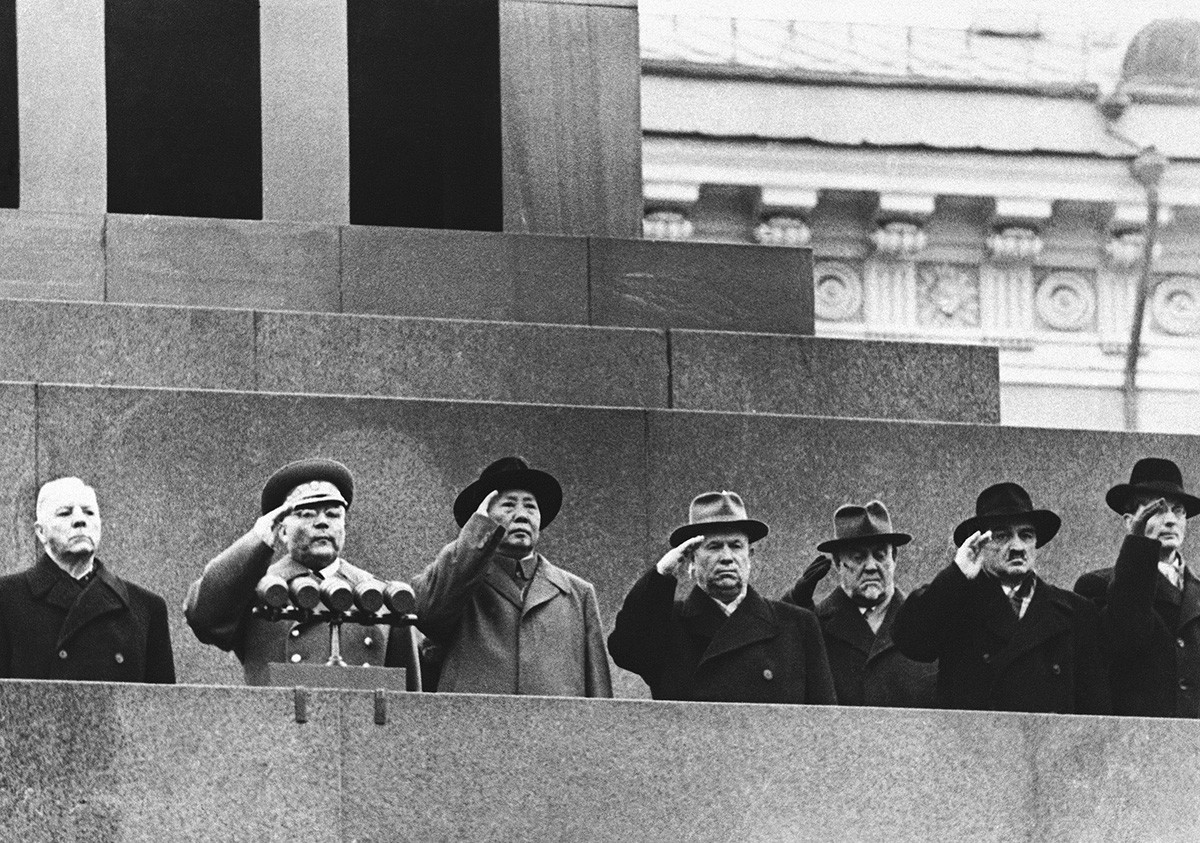 The most famous Chinese Communist, Mao Zedong only traveled abroad twice- and both times to the USSR. The first time was in 1949 when he attended Stalin's 70th birthday. And then he returned in 1957 and joined Khrushchev for the Revolution’s anniversary celebrations on the Mausoleum tribune. Well, after his death he got his own Mausoleum and even bigger than Lenin’s. 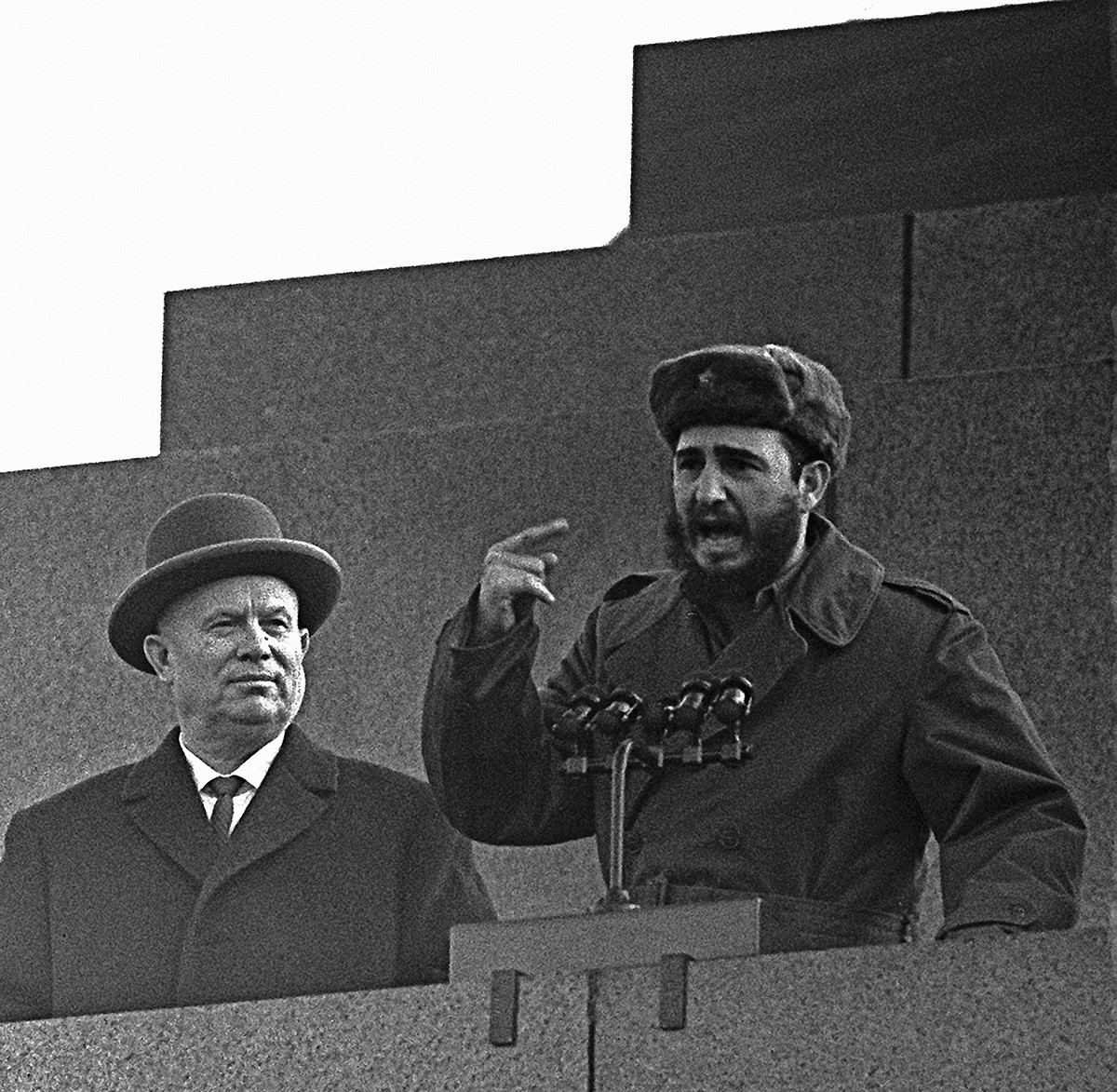 The Cuban revolutionary was a living legend and an honored guest in the USSR. He visited the Soviet Union and stood on the Mausoleum tribune several times. In 1963, Castro spent a month in the USSR and watched the May Day parade from the mausoleum shoulder by shoulder with Nikita Khrushchev. Then on May 23 he gave a two-hour long speech from the tribune. In 1987, Fidel climbed the Mausoleum again to watch the Revolution’s anniversary parade with Mikhail Gorbachev. 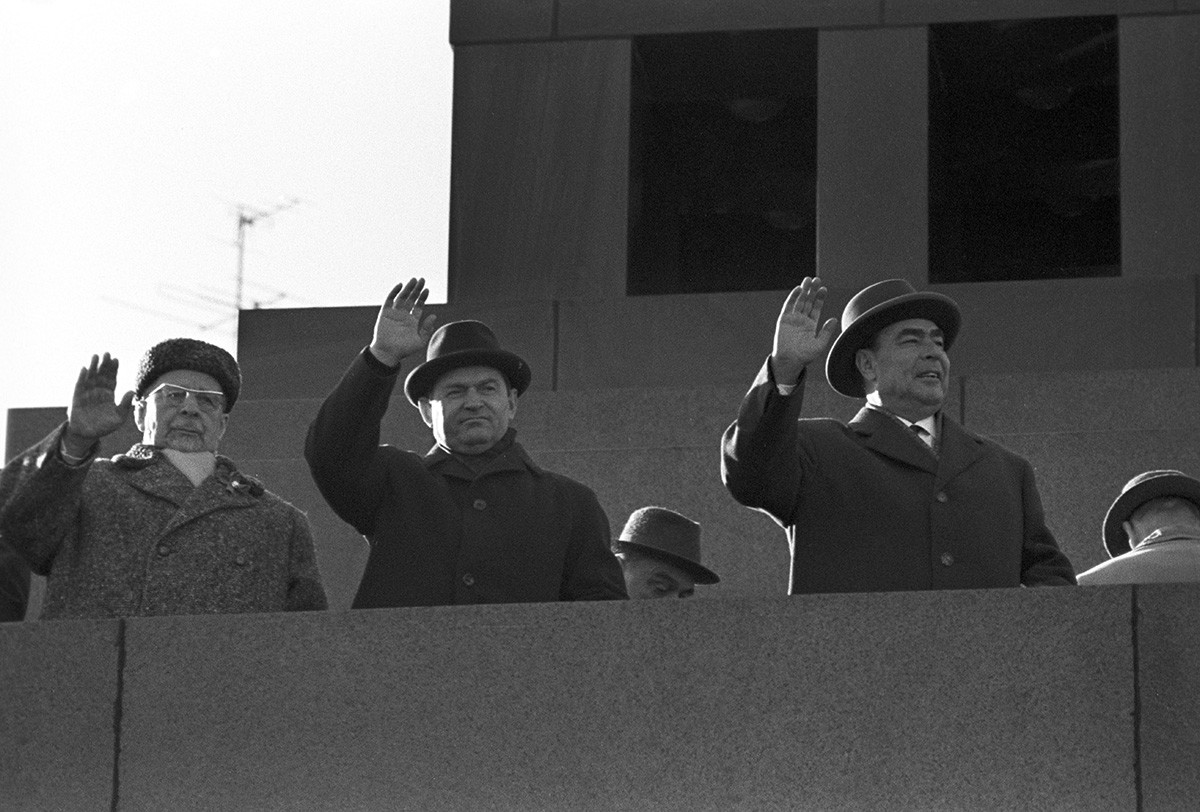 Walter Ulbricht was a founder of the Communist Party in Germany and an Eastern Germany politician. In 1969, as a chairman of the State Council of East Germany, he came to the USSR to celebrate the 50th anniversary of the Revolution. 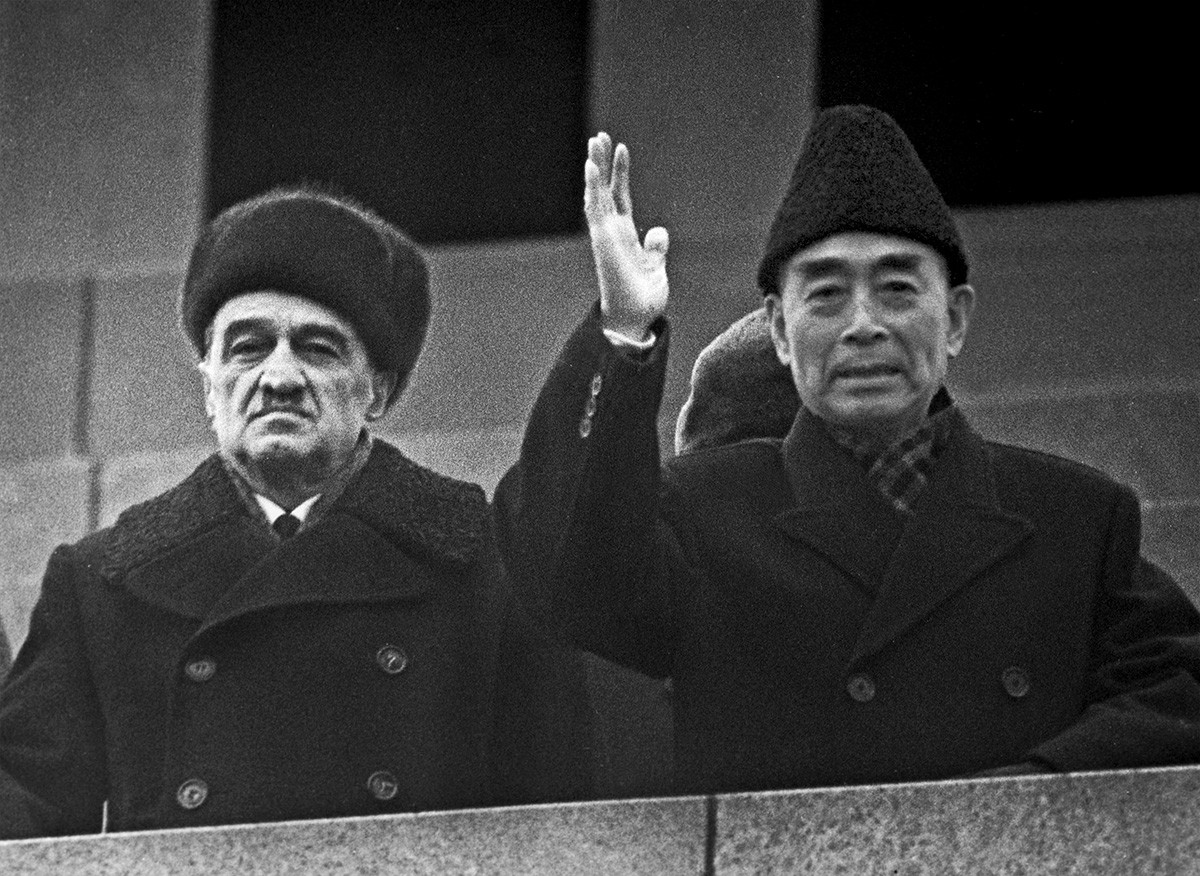 The Chinese communist Zhou Enlai had a long history of relations with Soviet Russia. In the 1930s, he was recruiting Chinese students for the Communist University of the Toilers of the East in Moscow. In 1964, already as Premier of the People's Republic of China, Zhou Enlai climbed the Mausoleum to celebrate the Revolution’s anniversary in Moscow. 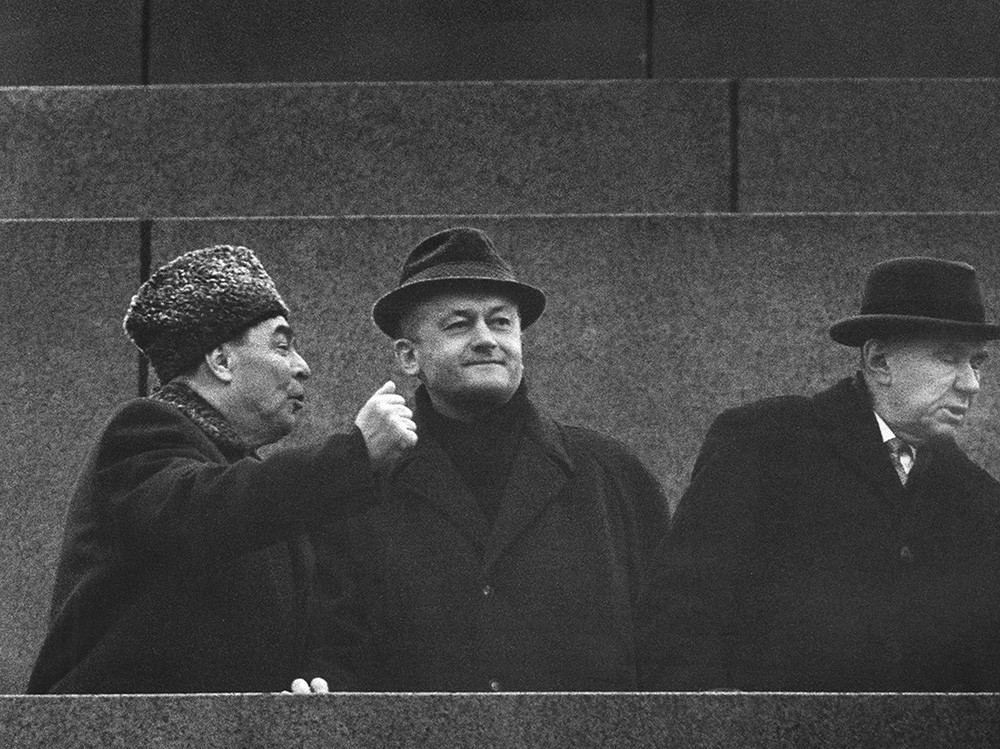 These two communist politicians were very pro-Soviet and acted against the liberalisation of the Czechoslovak Republic (the so-called Prague Spring), and even called for ‘fraternal assistance’ from Moscow,- supporting the invasion of Soviet tanks into Czechoslovakia. Their loyalty was appreciated , and these two were invited to Moscow to celebrate the Revolution’s anniversary in 1968. 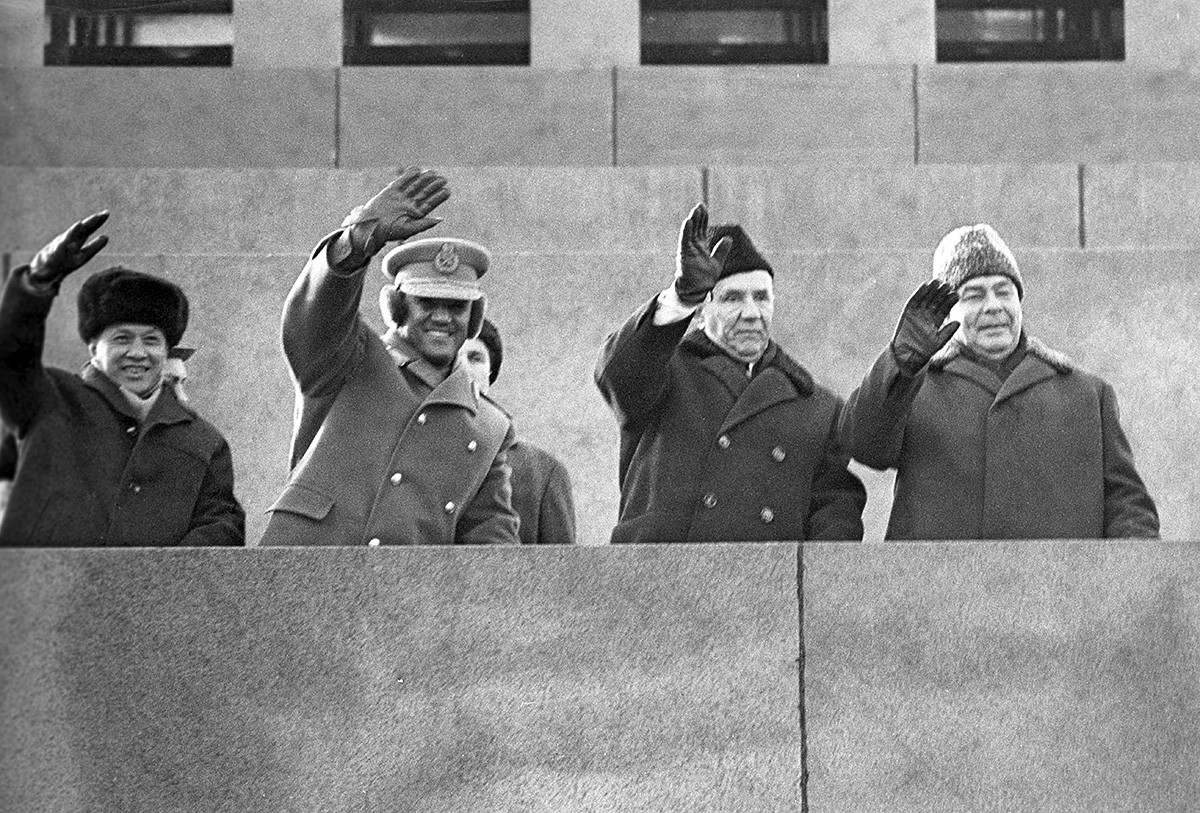 In 1969, another celebration of the Revolution in Moscow gathered two allied leaders of the Soviet Union. Sudan Prime Minister Jaafar Nimeiry, who by that time had arranged a coup-d'etat in Sudan, taking the country to the political left and orienting it toward the USSR. Another honored guest was Nguyễn Hữu Thọ, chairman of the Provisional Revolutionary Government of South Vietnam that was socialistic and was at that moment an exiled opposition to the ruling government. 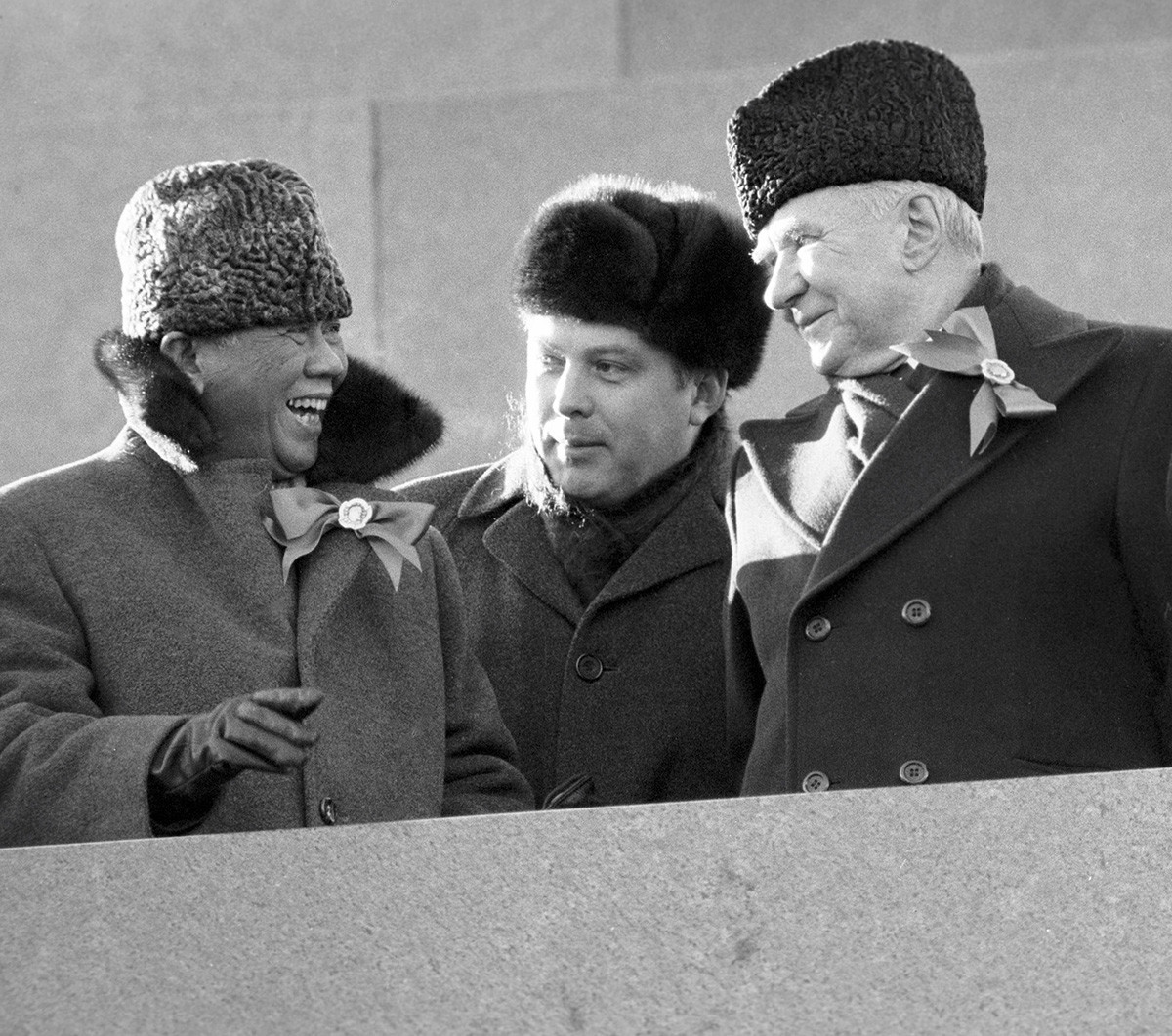 Vietnamese leaders were frequent guests in the Soviet Union. In 1978, the General Secretary of the Communist Party of Vietnam, Lê Duẩn, was invited to celebrate the 61th anniversary of the Revolution and watch the parade on a cold November day.