The USSR under Nazi occupation (PHOTOS) 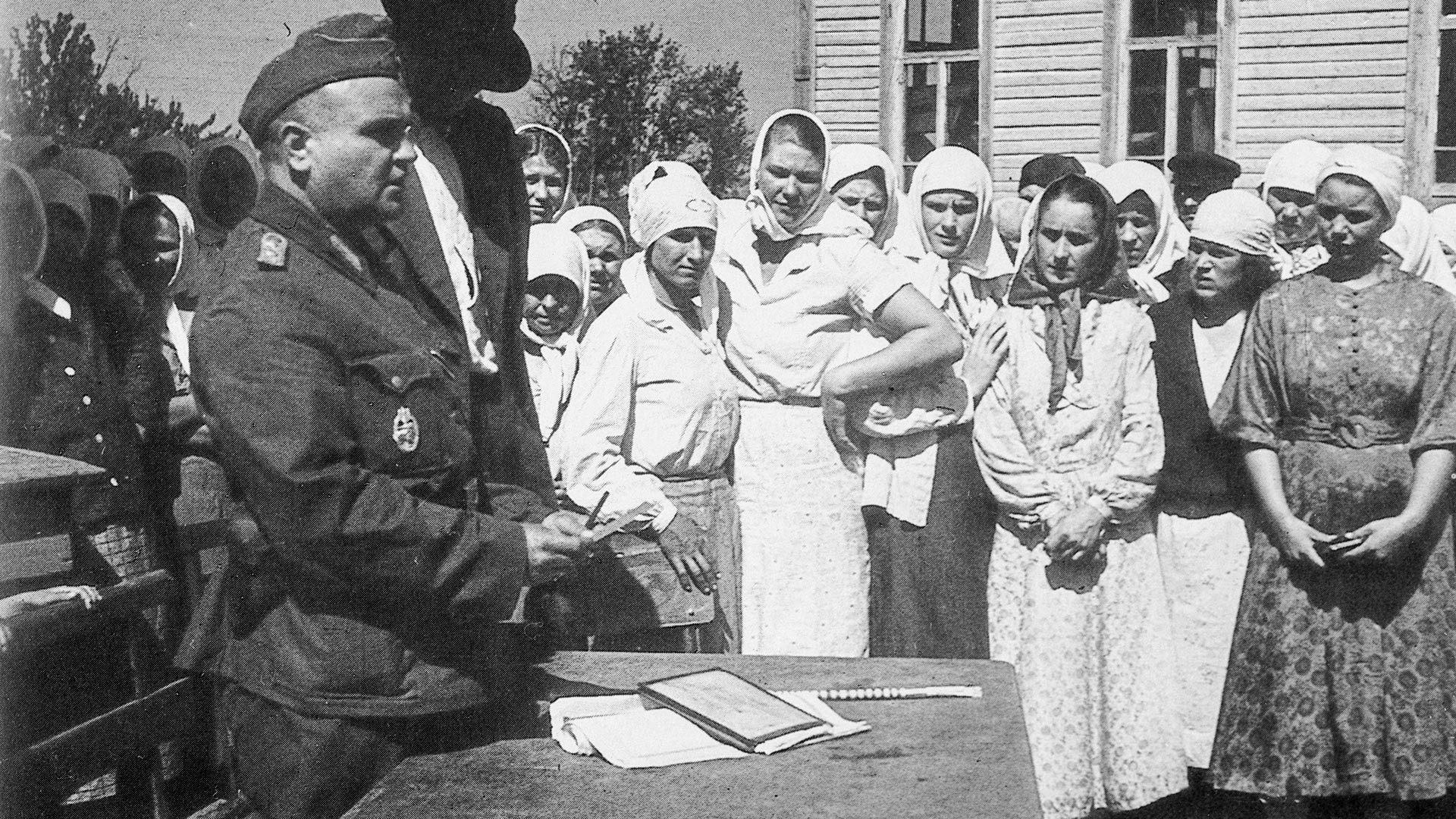 Valery Khristoforov/TASS
Under the German New Order, citizens of the Soviet Union were to be subjected to total enslavement and then extermination. And such Nazi policies in the occupied Soviet territories managed to claim the lives of over 13 million civilians.

“Russia cannot be approached with legal or political formulations, since the Russian question is much more dangerous than it seems, and we must use colonial and biological means to destroy the Slavs,” Adolf Hiler told Romanian Foreign Minister Mihai Antonescu in 1941. Under the Nazi-devised Generalplan Ost (“Master Plan East”), of the whole Soviet population in the European part of the Soviet Union occupied by Germany, only 14 million people were to remain to “serve the interests of the new regime”. The rest were earmarked either for extermination or forced deportation to Siberia. 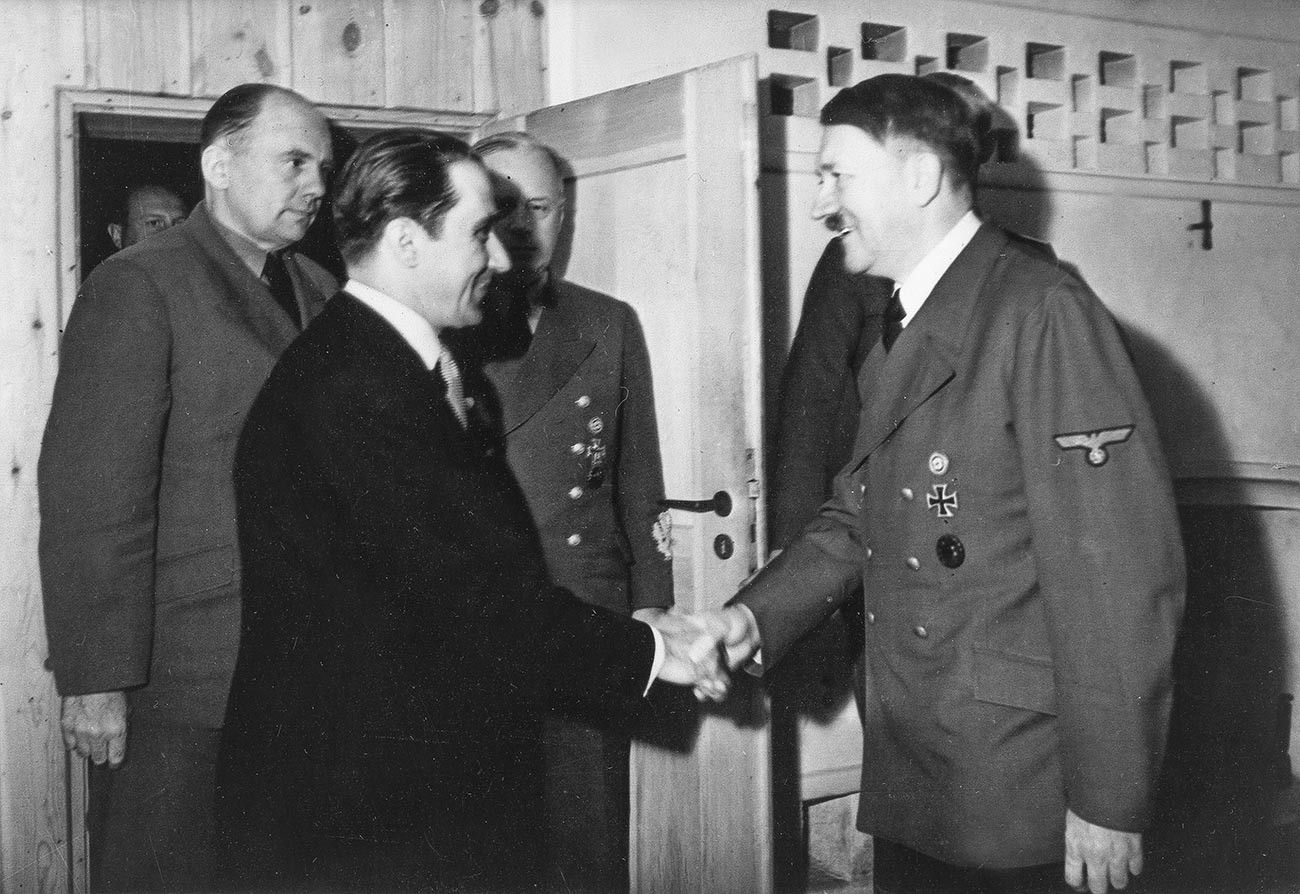 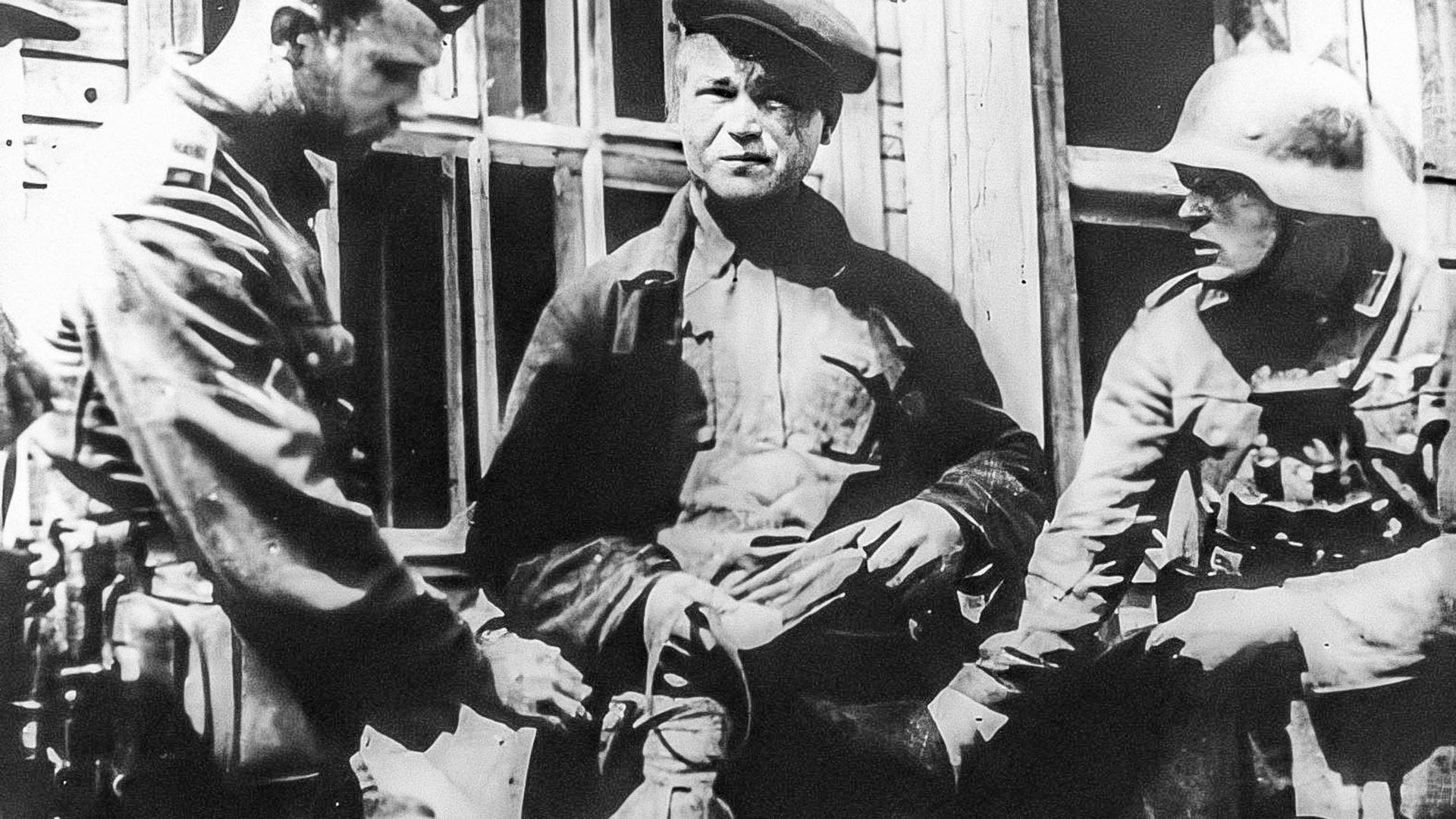 Despite being at the top of the administrative pyramid in the occupied territories, the Germans, nevertheless, could not do without the help of collaborators on the ground. As a result, a so-called “new Russian administration” was set up: Burgomasters appeared in cities and village chiefs were ‘elected’ from among local people in rural areas. The authorities collaborating with the enemy were responsible for ensuring timely supplies of food to the German army, maintaining law and order, fighting partisans and saboteurs, keeping roads in good condition and implementing propaganda work among the population. “The sooner the Jewish-Bolshevik domination is destroyed, the sooner will come the happy future which we have already started creating with our own hands,” wrote Konstantin Dolgonenkov, editor-in-chief of the collaborationist Novy Put newspaper in Smolensk (and a former member of the Union of Soviet Writers). 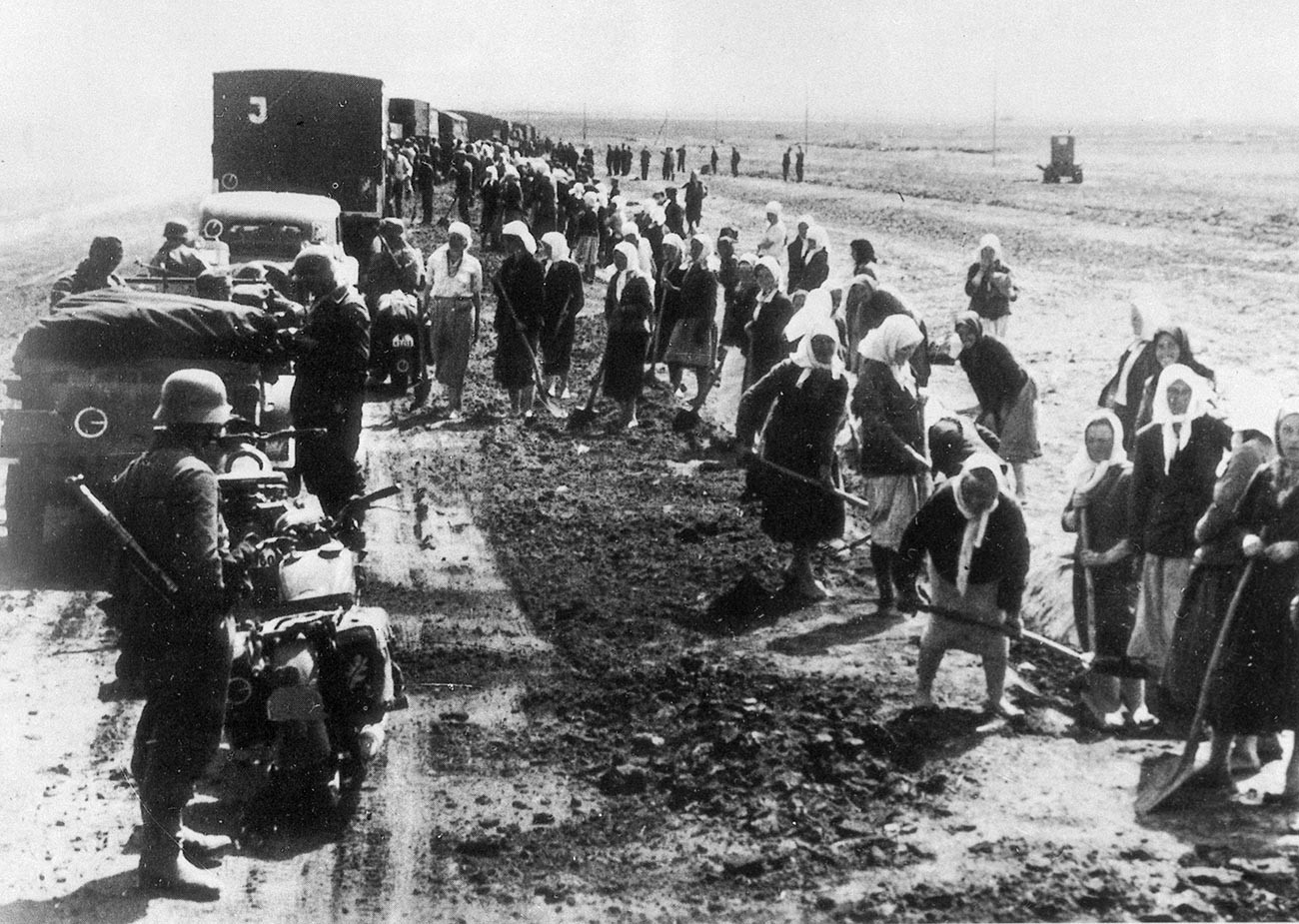 From the first days of the war, large German corporations, via their subsidiaries - the so-called ‘Eastern Companies’, began to take control of abandoned Soviet industrial enterprises. Most of them were adapted for military production, and machinery and skilled personnel were brought in from the Third Reich. As for the Soviet population, it was subjected to forcible mobilization for hard labor at construction sites, in agriculture, in peat and coal extraction and at logging enterprises. In addition, about five million Soviet citizens - the so-called Ostarbeiter - were deported to Germany as workers. 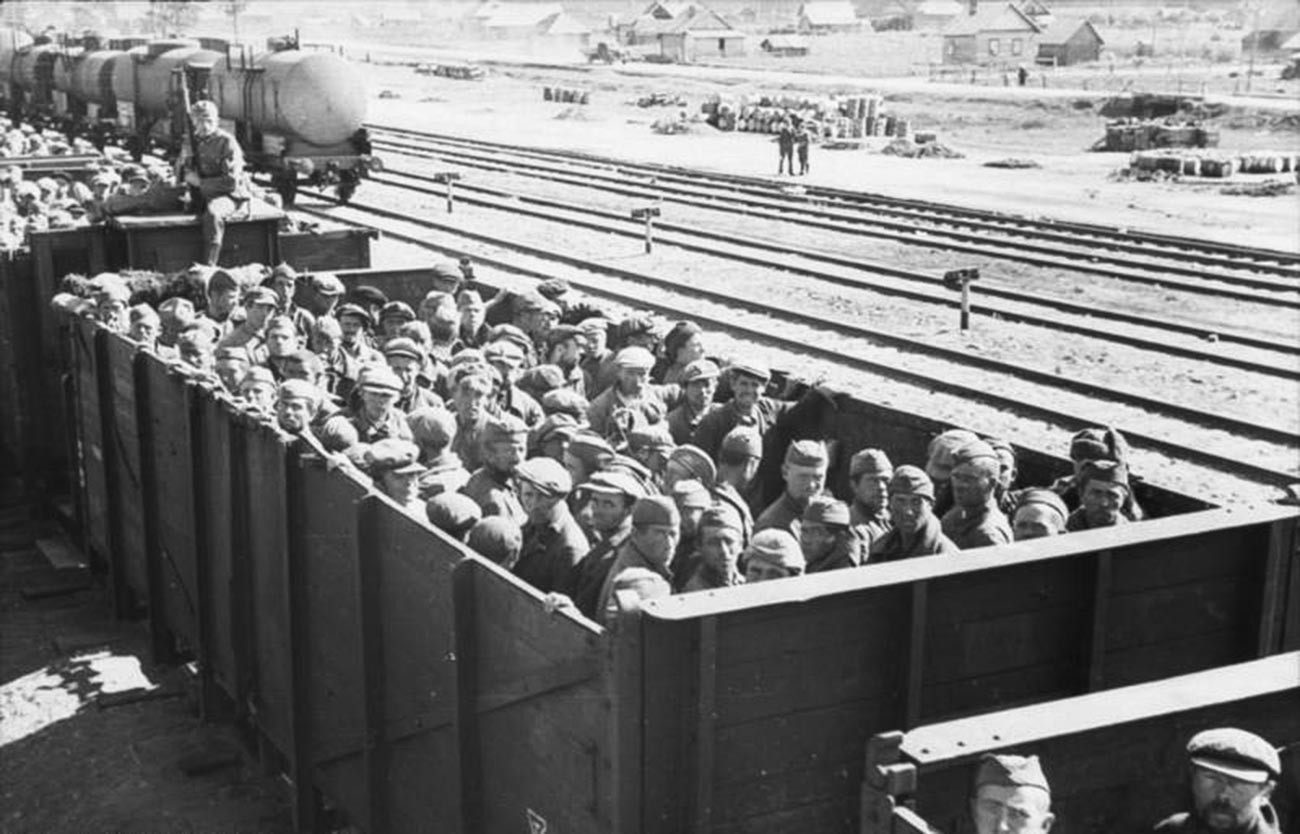 When a quick victory over the Bolsheviks failed to materialize and the war began to drag on, the Germans had to become more subtle in their dealings with the local population, trying to motivate people to jointly build a “New Europe”. On February 27, 1942, the Reich Ministry for the Occupied Eastern Territories issued a decree abolishing collective farms and instituting a gradual transition to private ownership of peasant holdings. The reform was presented as “Adolf Hitler's gift to the Russian peasantry”, some of whom did indeed hate the Soviet system of collective farming. In reality, however, the plots could be taken away just as readily as they had been allocated when their owners failed to meet the constantly growing compulsory delivery quotas and the peasants were subjected to punitive measures. At the time of their retreat from Soviet territory, the Germans stopped even pretending to observe “legality” and simply forcibly requisitioned the cattle and food they needed. 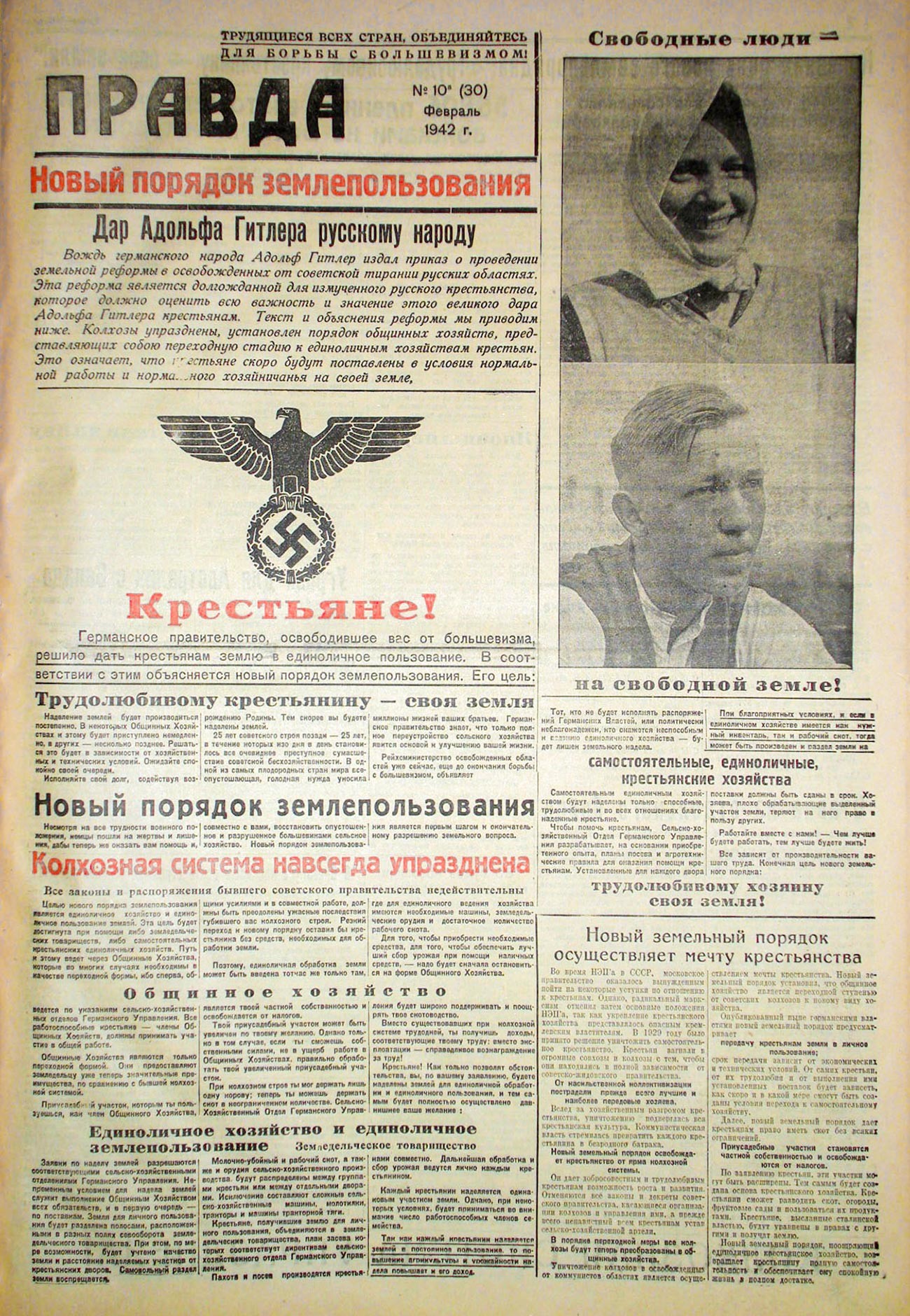 The first police units drawn from local collaborators were set up at the very beginning of ‘Operation Barbarossa’. As losses among German soldiers increased on the different military fronts and the partisan movement intensified its operations in the rear, the importance of these detachments steadily grew. Well armed and well trained, they were widely used for punitive expeditions against partisans and for guarding key military and transport facilities, as well as fighting the Red Army. In 1943, the majority of military detachments of Soviet collaborators joined General Andrey Vlasov’s so-called ‘Russian Liberation Army’. 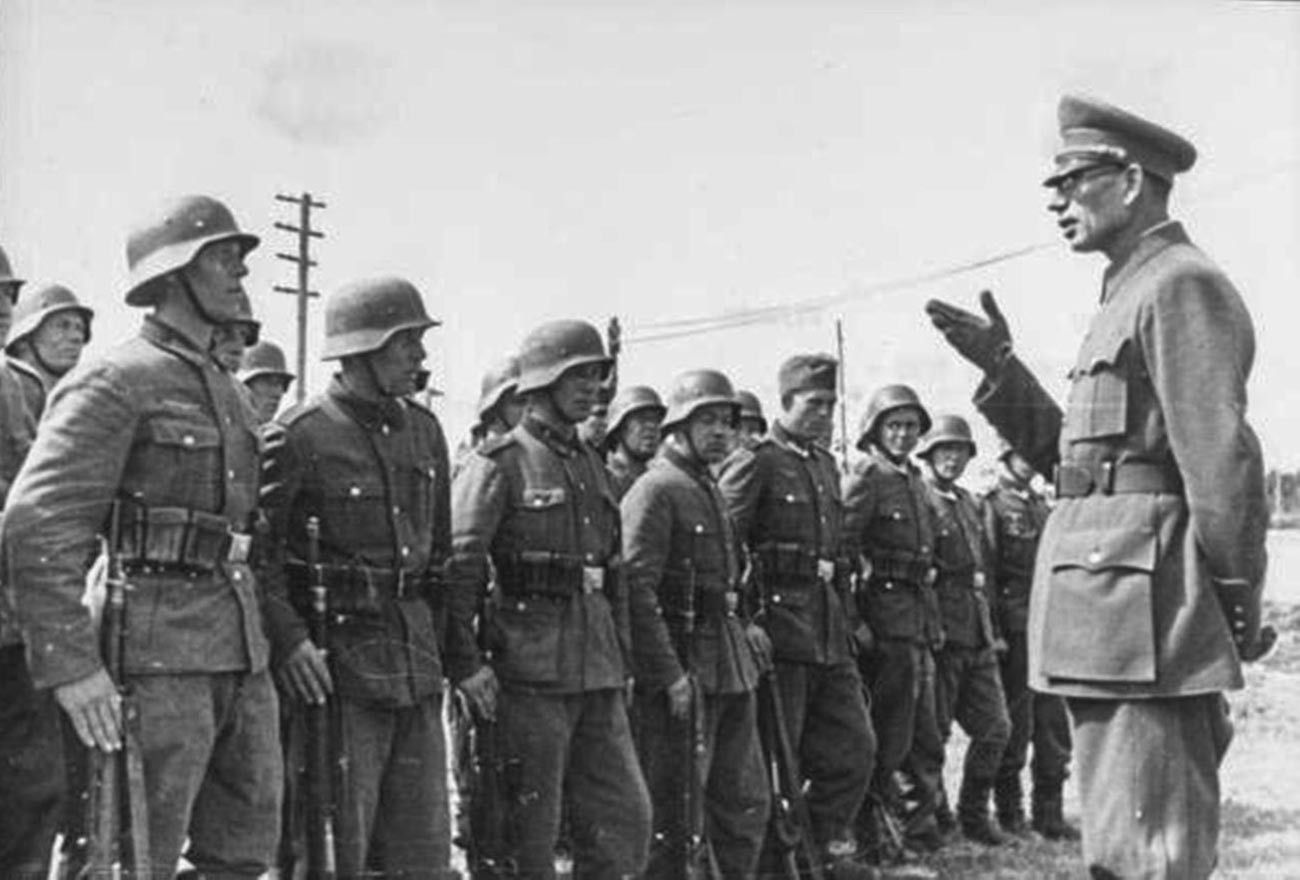 Andrey Vlasov with soldiers of the Russian Liberation Army.

Soviet intelligence did everything in its power to demoralize the collaborationist military formations with propaganda. Far from everyone served the Germans of their own free will and many were faced with the dilemma of whether to serve the Nazis or die. As a result, soldiers often fled to join the partisans. When on September 13, 1943, the 781st Turkestan Battalion, consisting mainly of Uzbeks, murdered all their German officers and switched to the Red Army side, Hitler even wanted to disarm all the Eastern Legions (Ostlegionen) and send their men to work in the coal mines, but, he abandoned the idea. Thenceforth, the Nazis were to try to keep them away from the Soviet-German front and use them against partisans in the Balkans and the Allied forces who had landed in France. 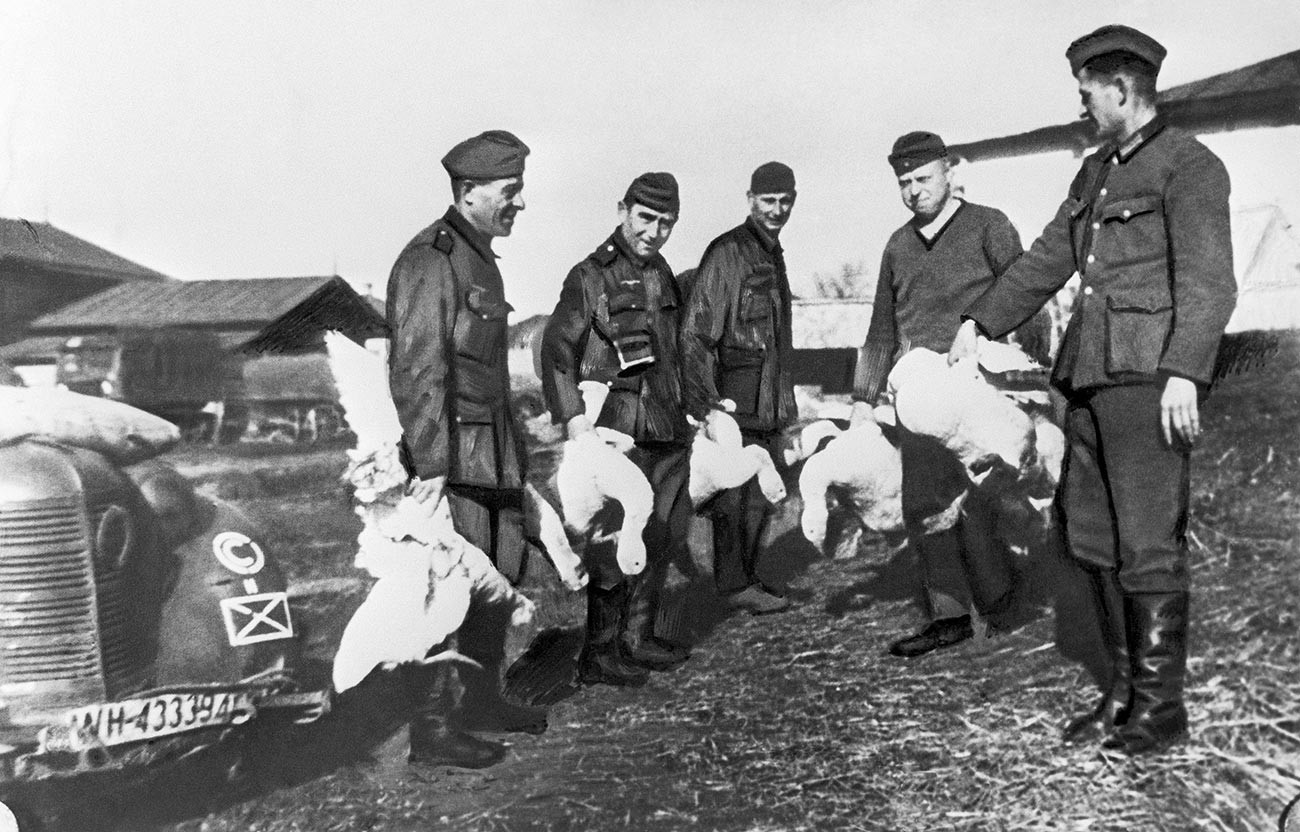 The partisan war became a real headache for the German occupying authorities. Over a million people fought against the enemy in partisan detachments during the whole period of the war. And whereas initially their operations were limited to the organization of acts of sabotage, small-scale ambushes and assassinations of village chiefs and other collaborators, from 1942 onwards the partisan groups, now significantly greater in number and battle seasoned, were wiping out whole garrisons and obstructing important enemy transport routes. Unified command was exercised by the Central Headquarters of the Partisan Movement, which in turn coordinated its actions with the Red Army leadership. In 1943, it organized the large-scale operations Concert and Rail War to destroy railroad tracks in the enemy rear with the involvement of more than 100,000 partisans. 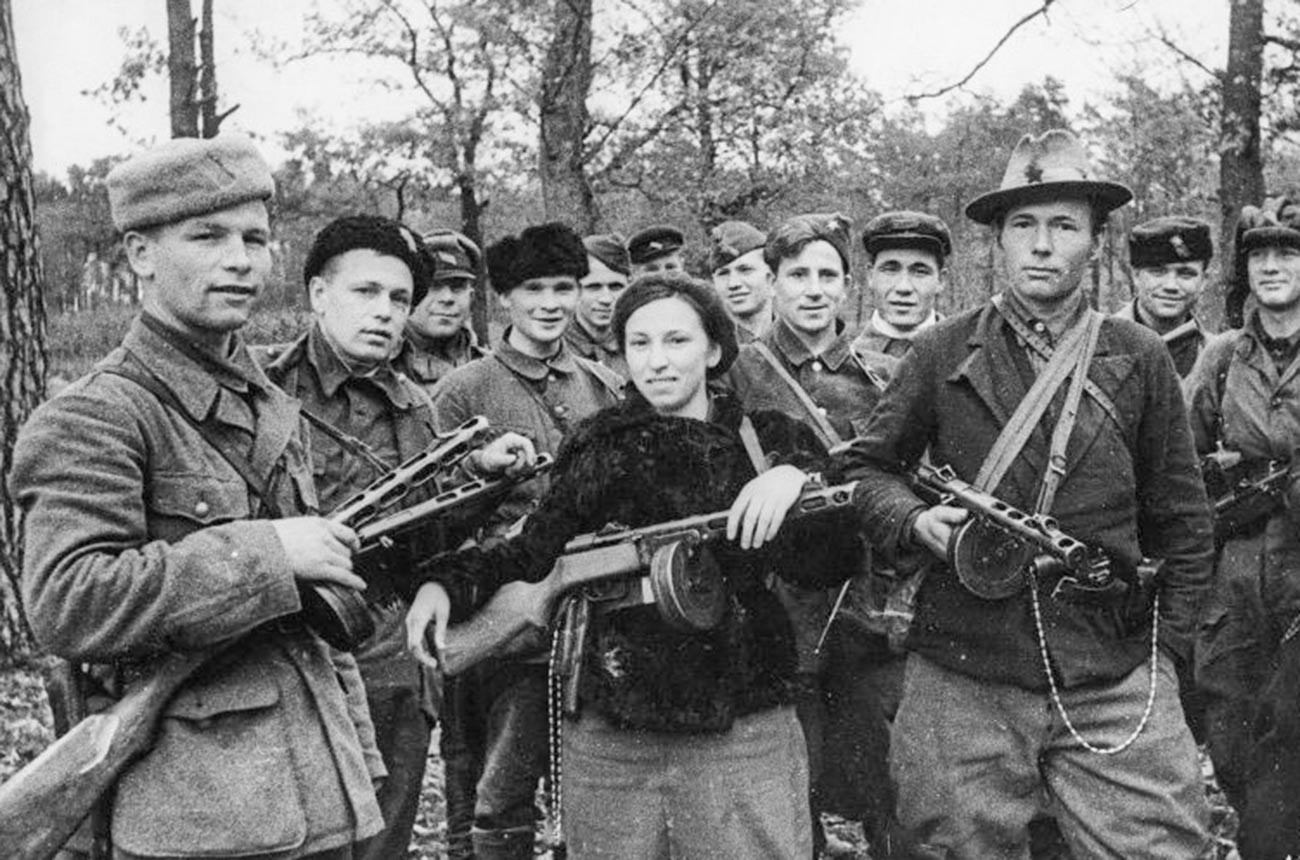 Stalin described this popular struggle as “our second front”. Sometimes partisan groups managed to liberate an area of territory in the enemy rear and restore Soviet power there. Sometimes these territories, which were called ‘partisan lands’, could occupy an area of thousands of square kilometers and exceed the size of certain European states. With the approach of the Red Army, the partisan groups were absorbed into its ranks. 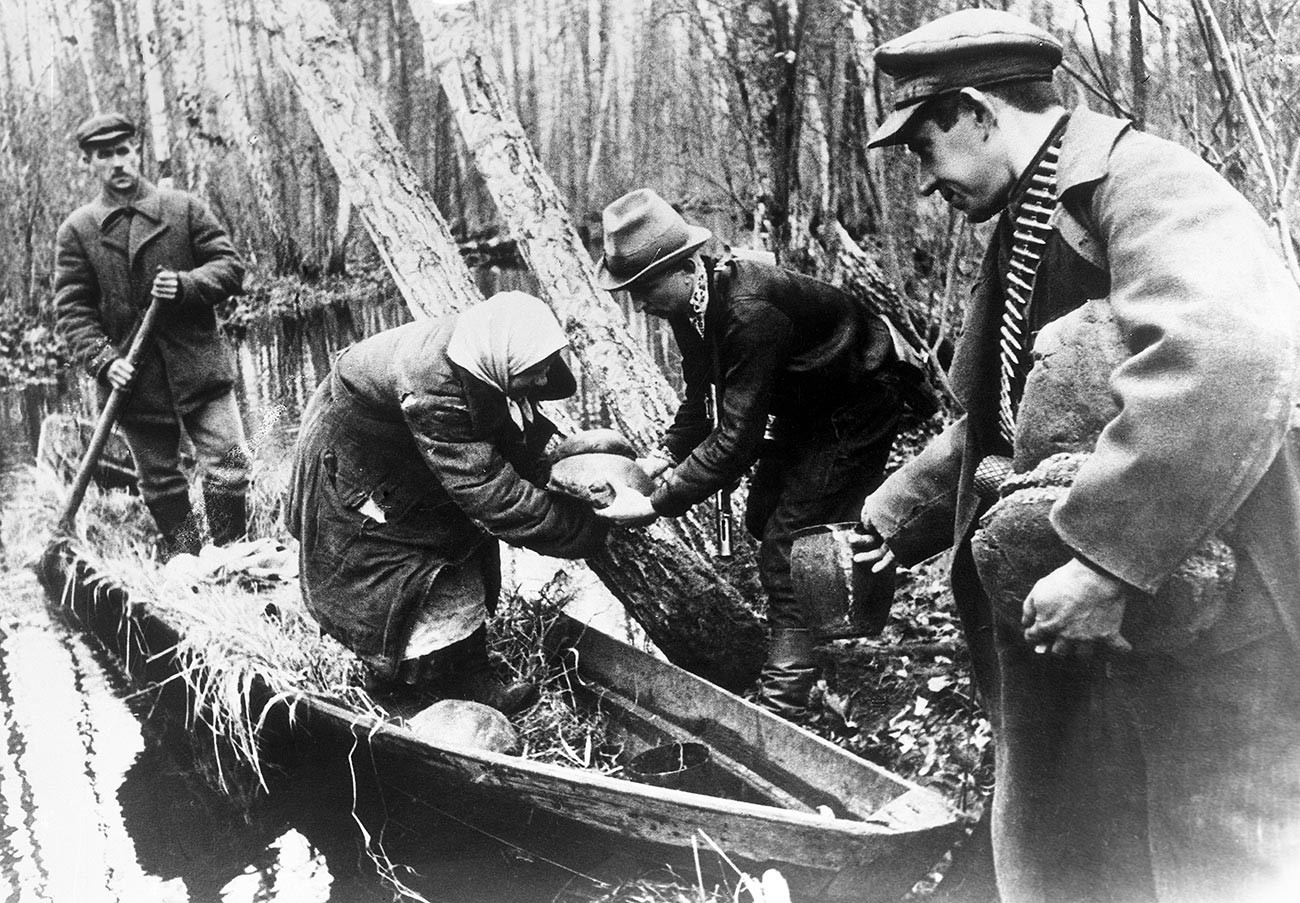 Anti-partisan operations became one of the Germans’ most important tasks during the war. Collaborationist police detachments, Wehrmacht and SS units, and also special “killer teams” of experienced hunters (the so-called Jagdkommandos), who were well versed in the tactics of the partisans, were deployed against them. The tactic of using fake partisan detachments was widely employed. These either established contact with the local population to discover the location of the real partisans, or, to discredit them, would engage in looting, rape and murder. Those who assisted or sympathized with the partisans were brutally punished. Their bodies were left strung up on gallows in villages for weeks before being allowed to be taken down. On March 22, 1943, 149 inhabitants of the Belorussian village of Khatyn were shot or burnt alive in retaliation for the killing of several German soldiers. 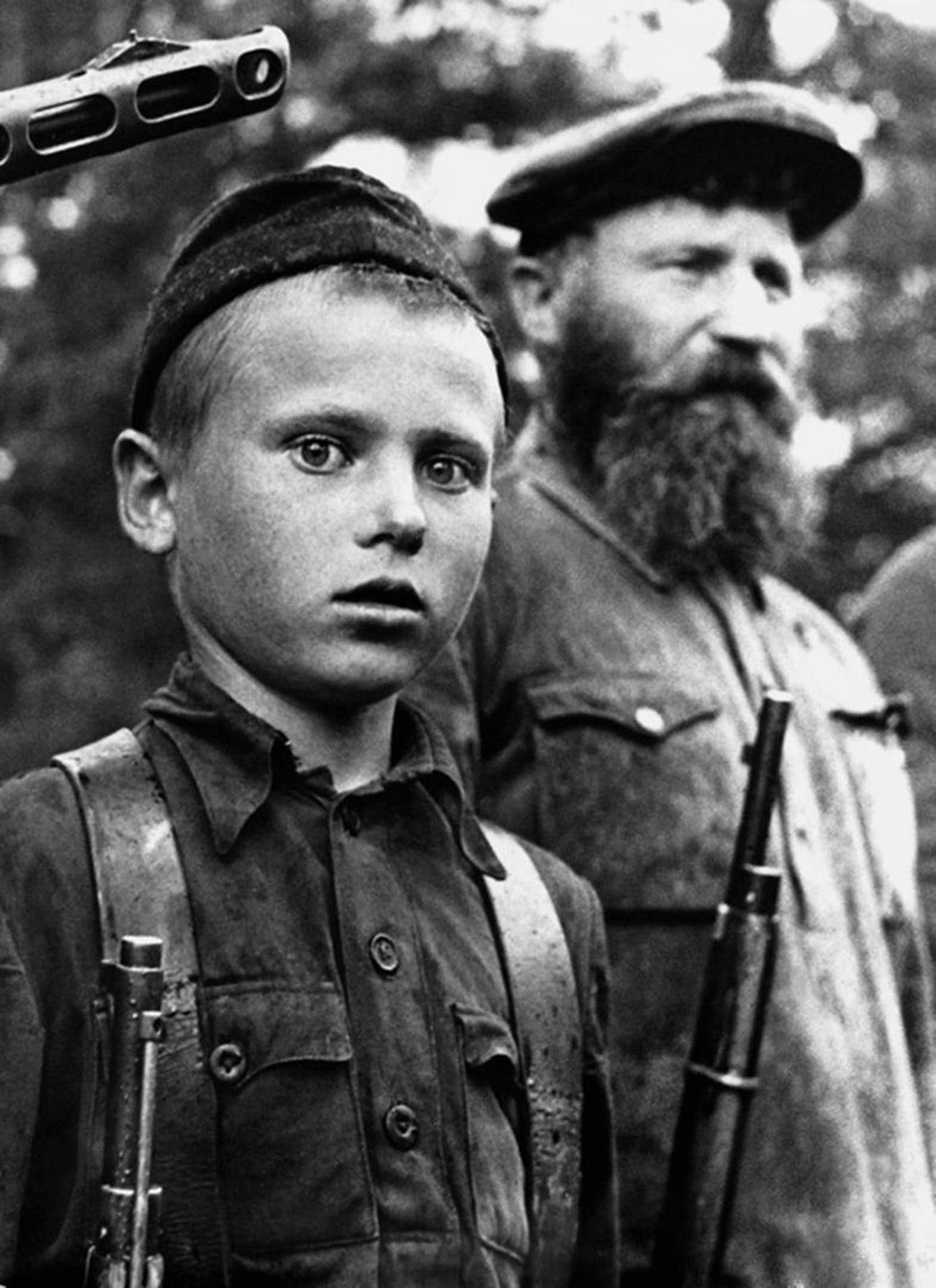 The German policy of systematic extermination of Jews, gypsies, Communists, partisans and Soviet citizens abetting them, unreliable elements and people overtly opposed to the new regime in occupied Soviet regions led to the deaths of more than seven million people among the civilian population. Four million people died of starvation, infectious diseases and the lack of any kind of medical assistance. Another two million Soviet citizens perished on the territory of the Third Reich, where they were deported for forced labor. 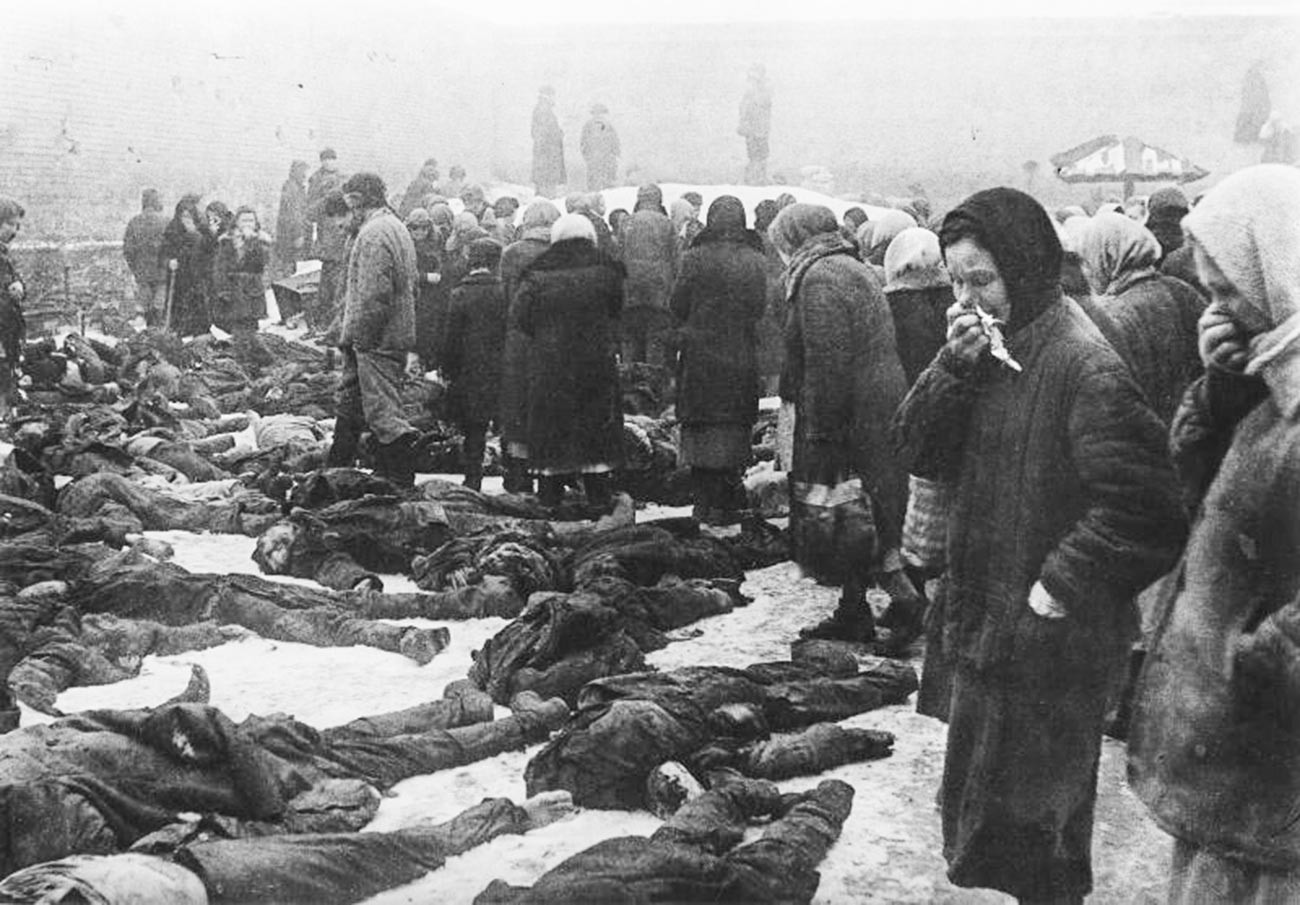