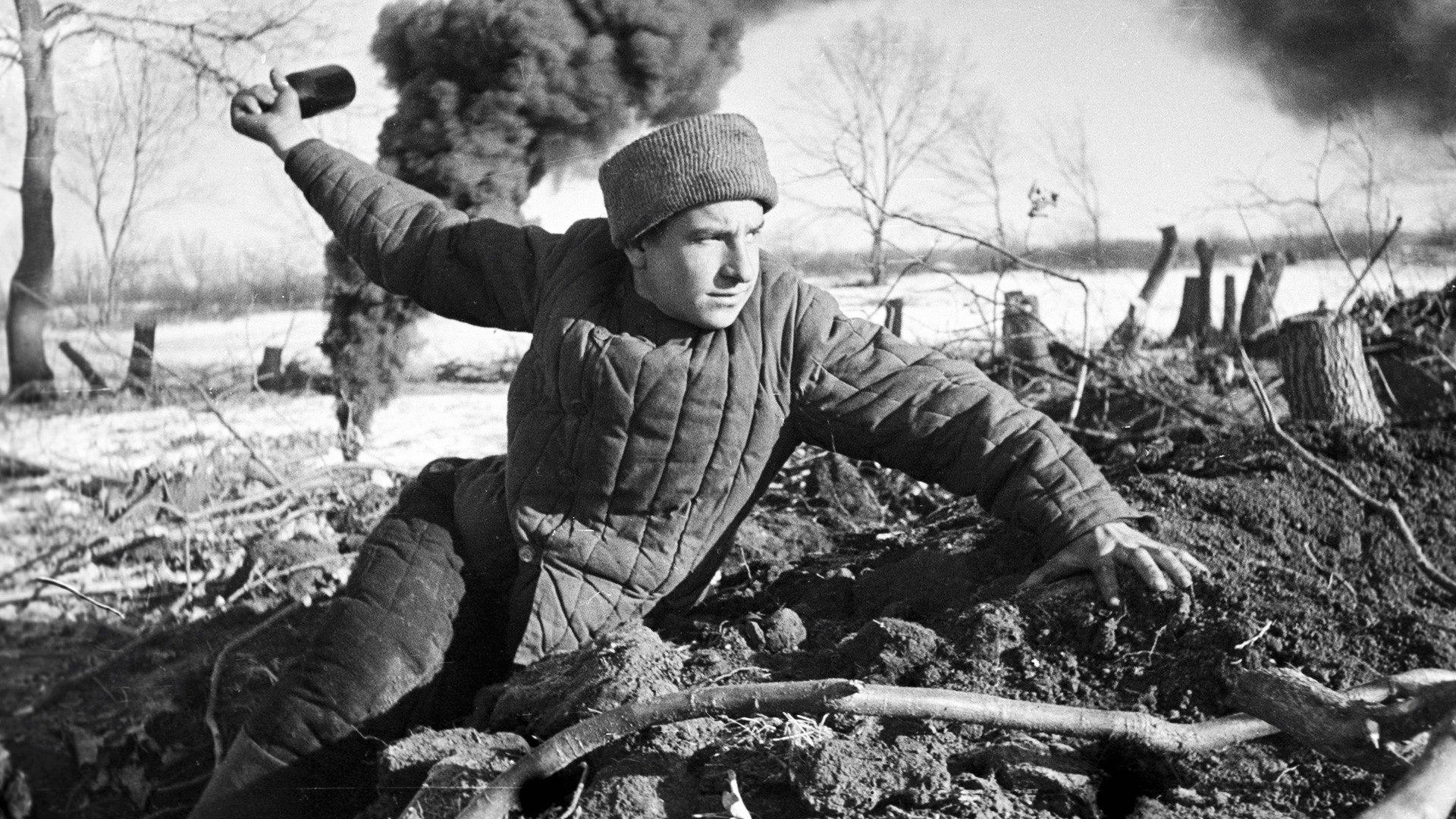 Georgy Zelma/Sputnik
By using some of our most popular articles, we’ve put together a guide to the Soviet Union’s participation in history’s most horrible military conflict. 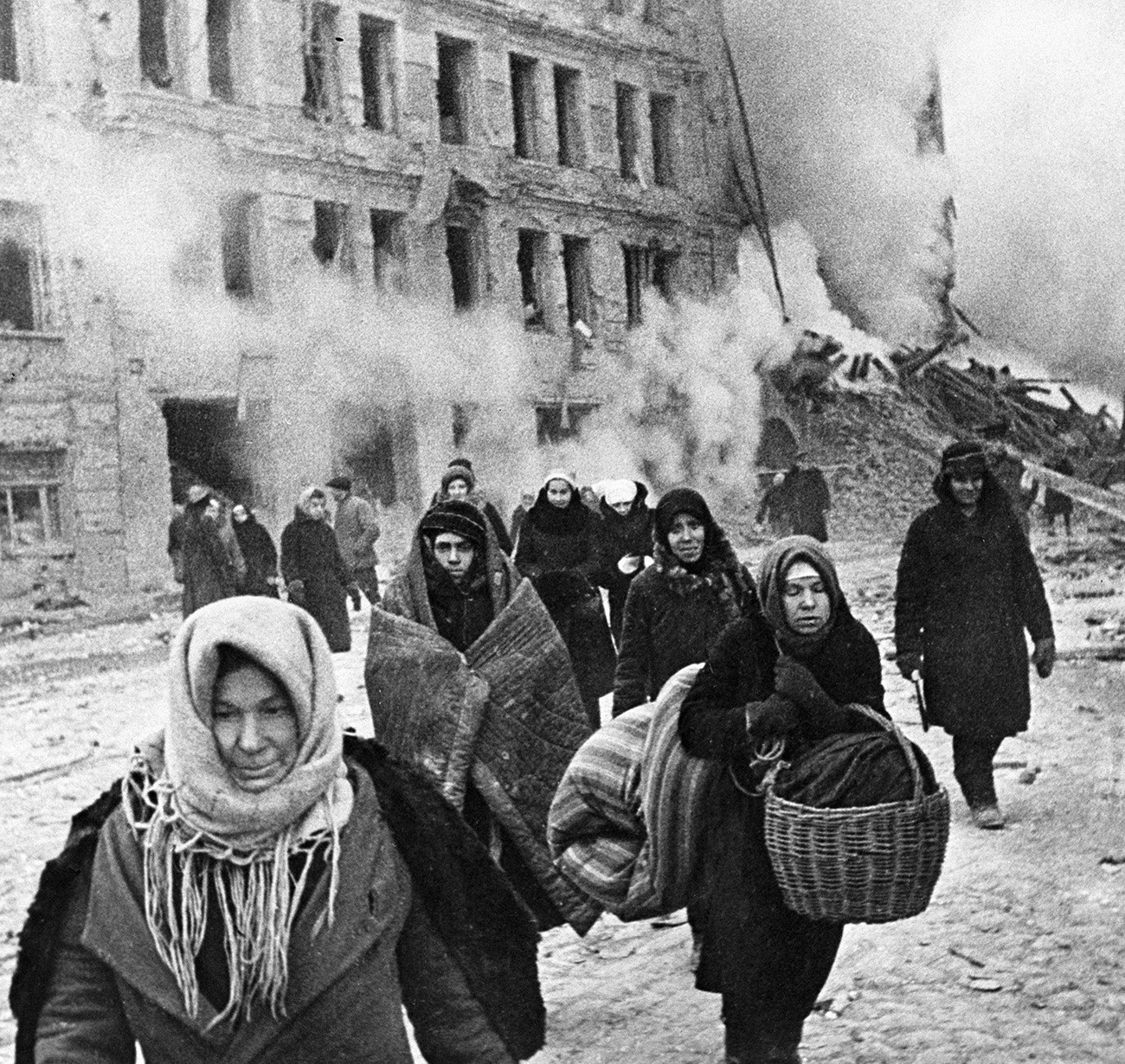 Citizens of Leningrad during the siege of the city.

By far the most deadly and destructive military conflict in history, World War II took the lives of at least 27 million Soviet soldiers and civilians. The war on the Eastern Front (or as it is known in Russia - the Great Patriotic War) lasted 1,418 days, and took place across vast territories: from the freezing Arctic to the warm Caucasus region, as well as from the outskirts of Moscow to the heart of the Third Reich, Berlin.

Before the fight against the Nazis began on June 22, 1941, the Soviet leadership concluded a non-aggression pact with Hitler, which, as it turned out, determined the future of Eastern Europe for decades. Here you can read why Moscow made such a decision.

Stalin knew that the conflict against Germany was inevitable. The Soviet goal was to buy time and prepare its armed forces before the clash of the titans began. The relative weakness of the Red Army was clearly demonstrated during the Winter War against Finland, about which you can read here. 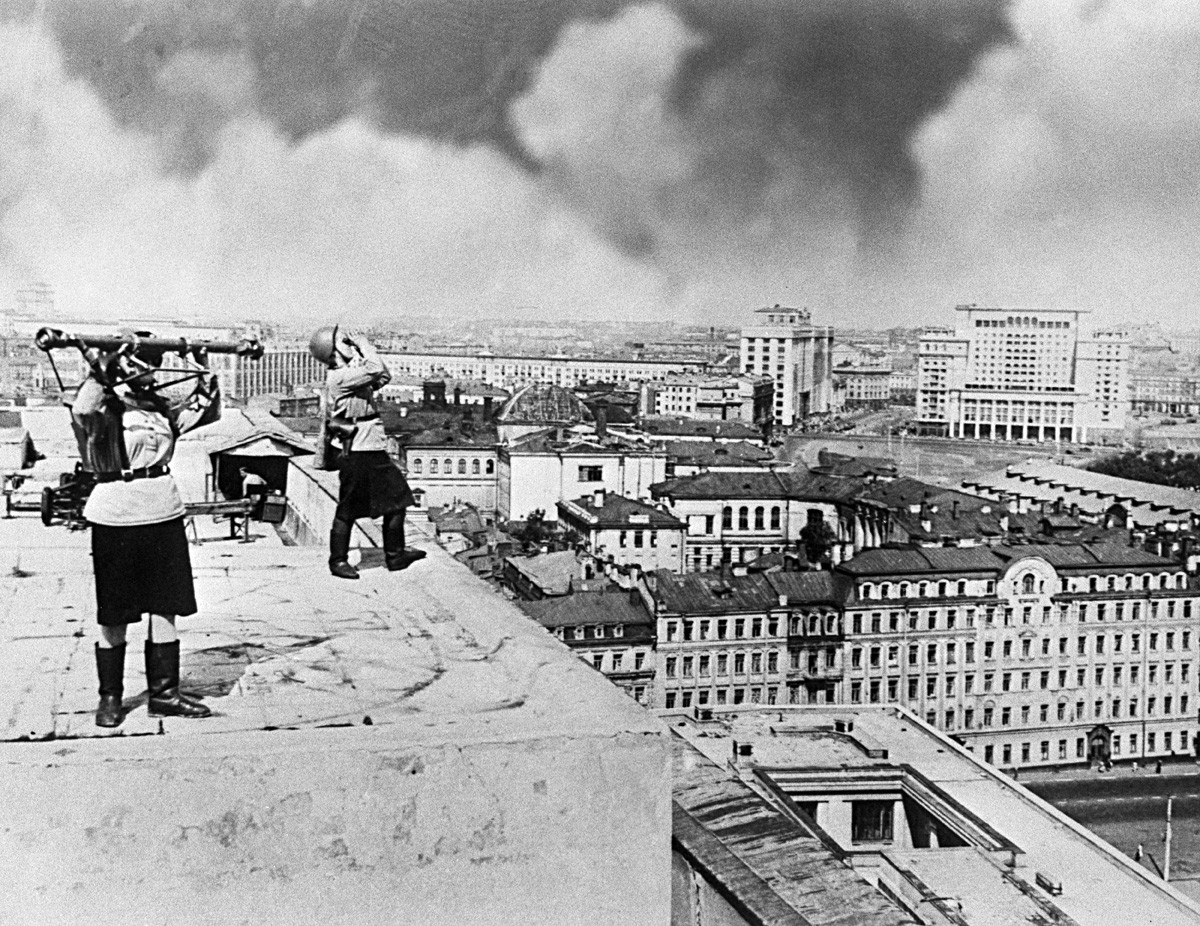 Sentry post on the roof of the Bolshoi Theatre in Moscow.

Following the Soviet-Finnish war proper conclusions were reached about the mistakes made, and military reforms were taken. Nevertheless, 1941 was a horrible year for the Red Army and the entire USSR. During the first several months of the war, Germany occupied vast parts of Belarus, Ukraine and the Baltic region, and its troops reaches the gates of Moscow and Leningrad.

The Soviet Union, however, wasn’t going to surrender and actively demonstrated to the world its strong will to fight. Even in such critical times its aviation bombed the German capital, and while the enemy was just several dozen miles away the Red Army held a solemn military parade in Moscow.

During the battle for the Soviet capital, the Nazi war machine was stopped and pushed back. Read how the Kremlin was “hidden” from the ravenous Luftwaffe in the skies above Moscow and other interesting facts about this battle. 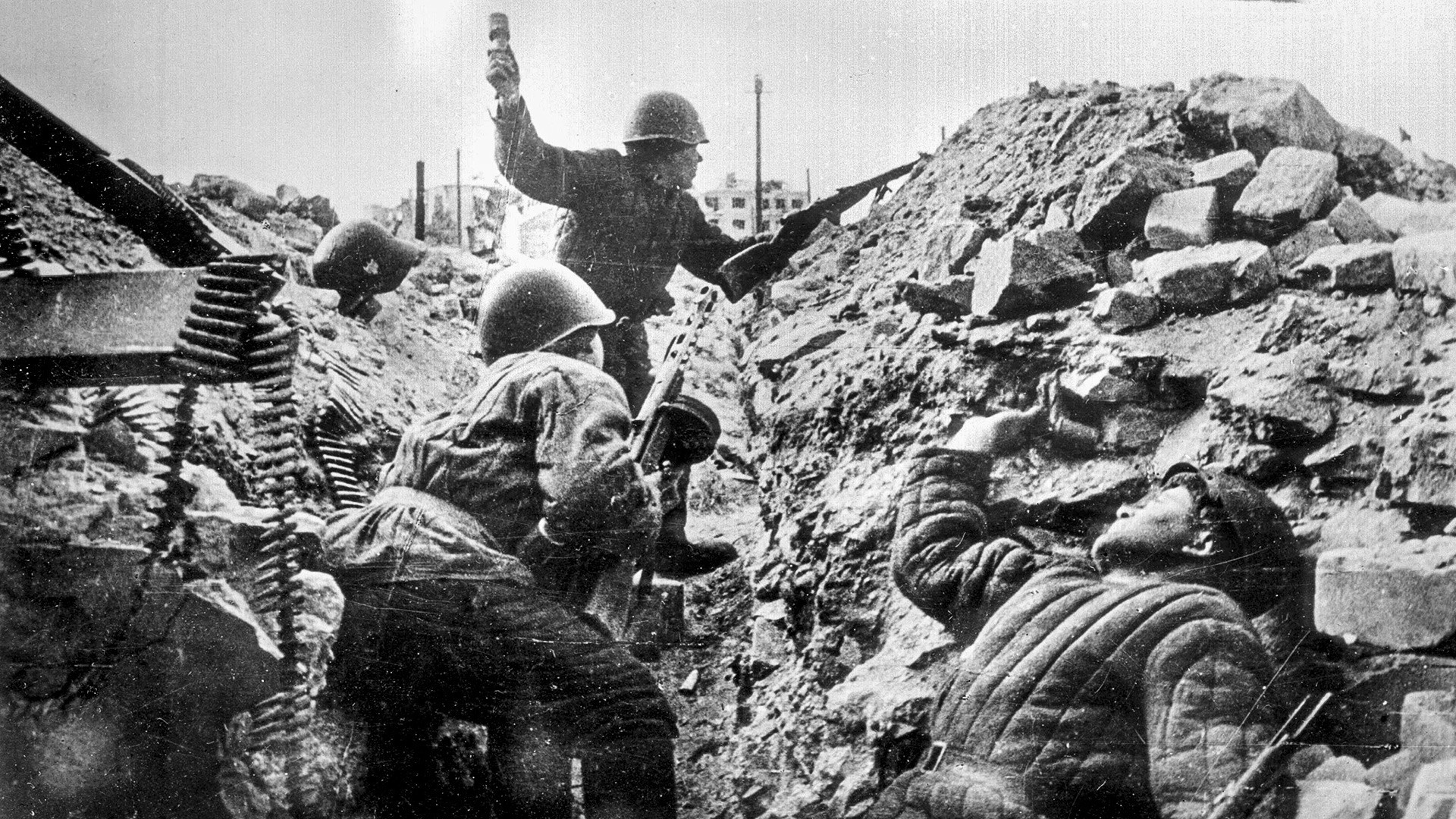 Almost two million people died in one of the bloodiest clashes in history - the Battle of Stalingrad, which in large part determined the final outcome of World War II. You can experience the ferocity of the fighting in our compilation of Soviet soldiers’ memoirs, and in this article devoted to great heroic deeds during that fight.

What started at Stalingrad continued at Kursk. The Third Reich’s last chance to win was lost in summer 1943 when their offensive operation, ‘Citadel,’ collapsed. Henceforth, the Red Army firmly and irrevocably had the initiative in its hands.

The enemy was gradually squeezed from Soviet territory. On January 27, 1944, the Siege of Leningrad, which lasted 872 days and took the lives of at least 648,000 civilians, was finally lifted. Here you can read what helped citizens to survive this nightmare. 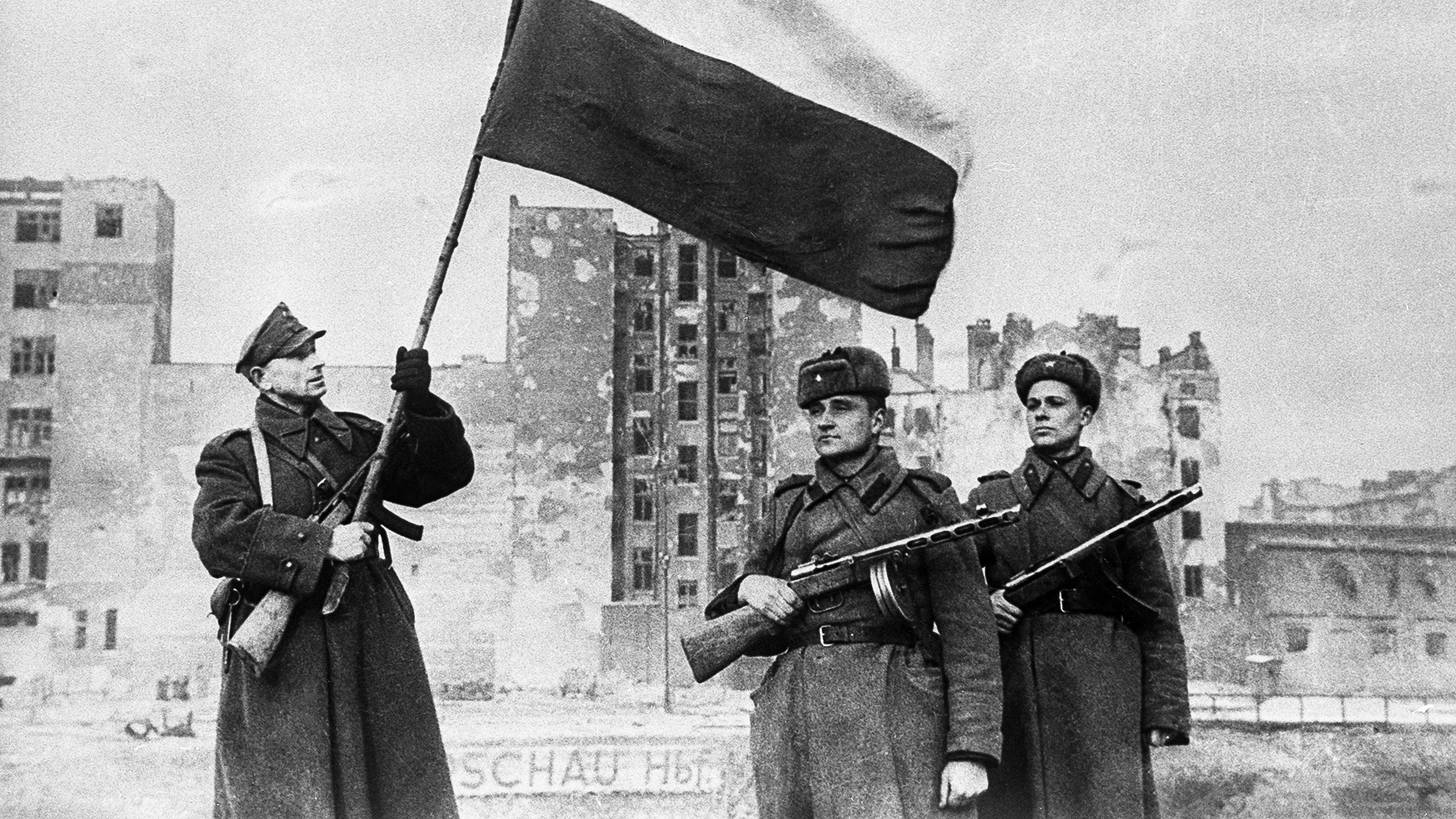 On March 26, 1944, Soviet troops reached the Prut River, beyond which was Romania. It was the first time during the war when the Red Army crossed the state border of the USSR. Here you can read how Soviet soldiers liberated European cities.

In 1941, the Soviet Union suffered much from the German Blitzkrieg. However, in 1944 it returned the favour. Watch the photo gallery of the breakthrough offensive operation, “Bagration”, which ended in complete annihilation of the Army Group Center. Thousands of German POWs were taken to Moscow and shown in a parade, which is certainly what they weren’t dreaming of when they started the war.

The final blow against the nearly defeated enemy came with the Battle of Berlin. Did you know that the Red Army wasn’t the only one that assaulted the city in spring of 1945 and that American tanks also fought Germans on Berlin’s streets? These and other interesting facts about this battle can be found here. These photos will show you how the capital of the Third Reich looked like when the battle ended. 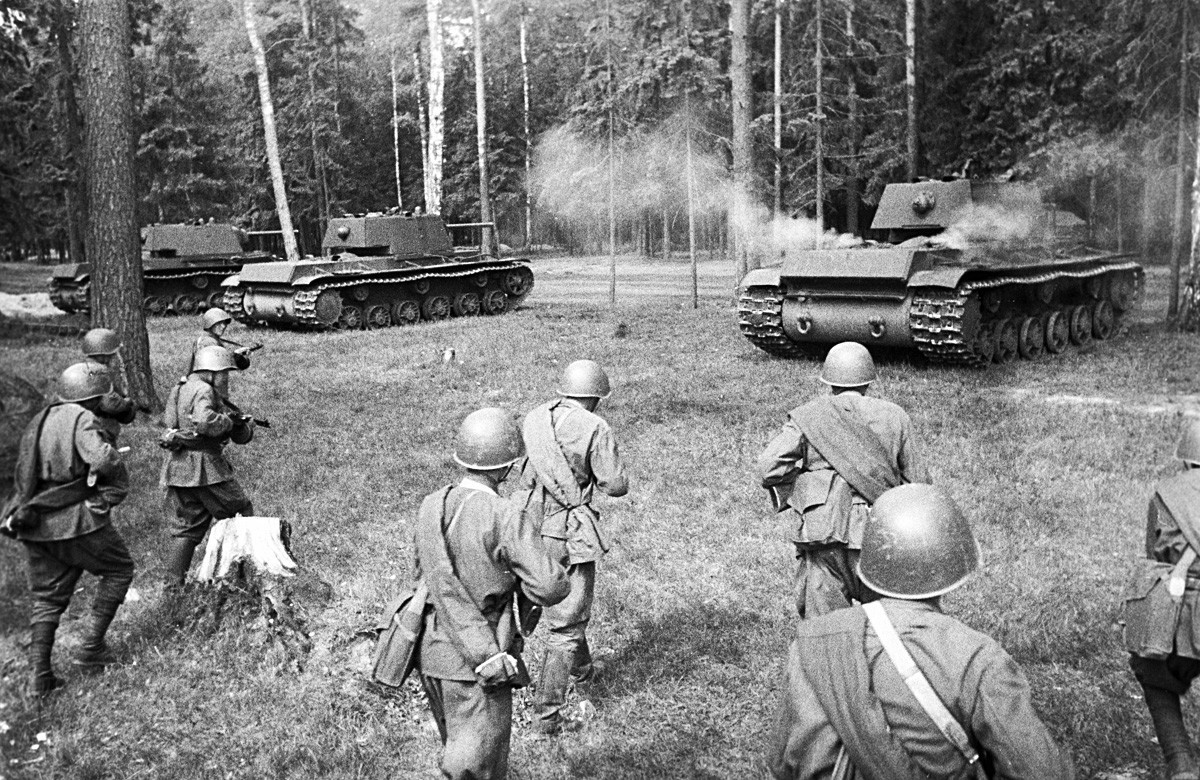 Though the Red Army performed poorly during the early period of the war, its weapons subsequently stunned the Germans. They often gave Soviet military equipment nicknames, such as “Russian monster,” (KV-1 heavy tank), and one even stopped the movement of an entire Wehrmacht division; “Stalin’s Sledgehammer” (B-4 howitzer); “Stalin’s Organ” (Katyusha multiple rocket launcher); and even “Mickey Mouse” (BT-7 light tank).

Of course, not all Soviet weapons were perfect. Here you can read about the worst Red Army tanks and aircraft during the war. You can also find out why this anti-tank gun was called by Soviet soldiers, “Farewell, homeland!”

The Red Army also used a very special weapon - animals. During the early period of the war there were specially trained suicide dogs that crawled under enemy tanks while carrying explosives. We should also mention the so-called “meowing division” that was sent to fight an army of rats in Leningrad after the Siege was lifted. 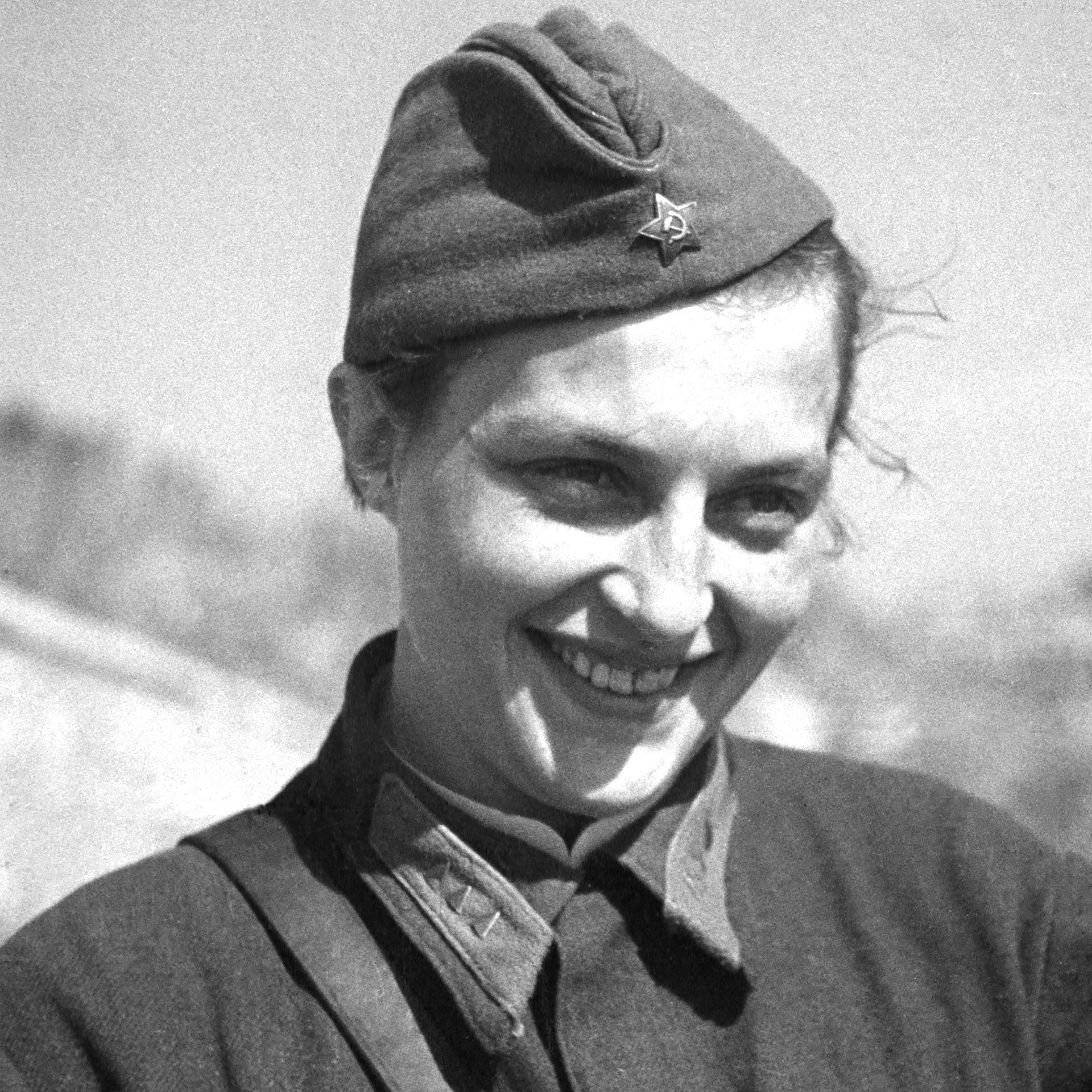 A total of 11,657 men and women were granted the highest honor that any Soviet citizen could aspire to - they became Heroes of the Soviet Union during the war. Among these were top Allied tank killer, Dmitry Lavrinenko, leading Allied fighter ace, Ivan Kozhedub, and artillery officer Vasily Petrov, who lost both his hands but continued to fight.

Not only Soviet citizens were heroes. Here you can read about the foreigners who chose to fight for the USSR during the war, and Moscow was thankful to them for this. Even a Wehrmacht soldier counts among them!

It was not enough to simply receive the highest award — recipients had to earn the right to keep it. As such, 72 people were stripped of their title. Read why here. 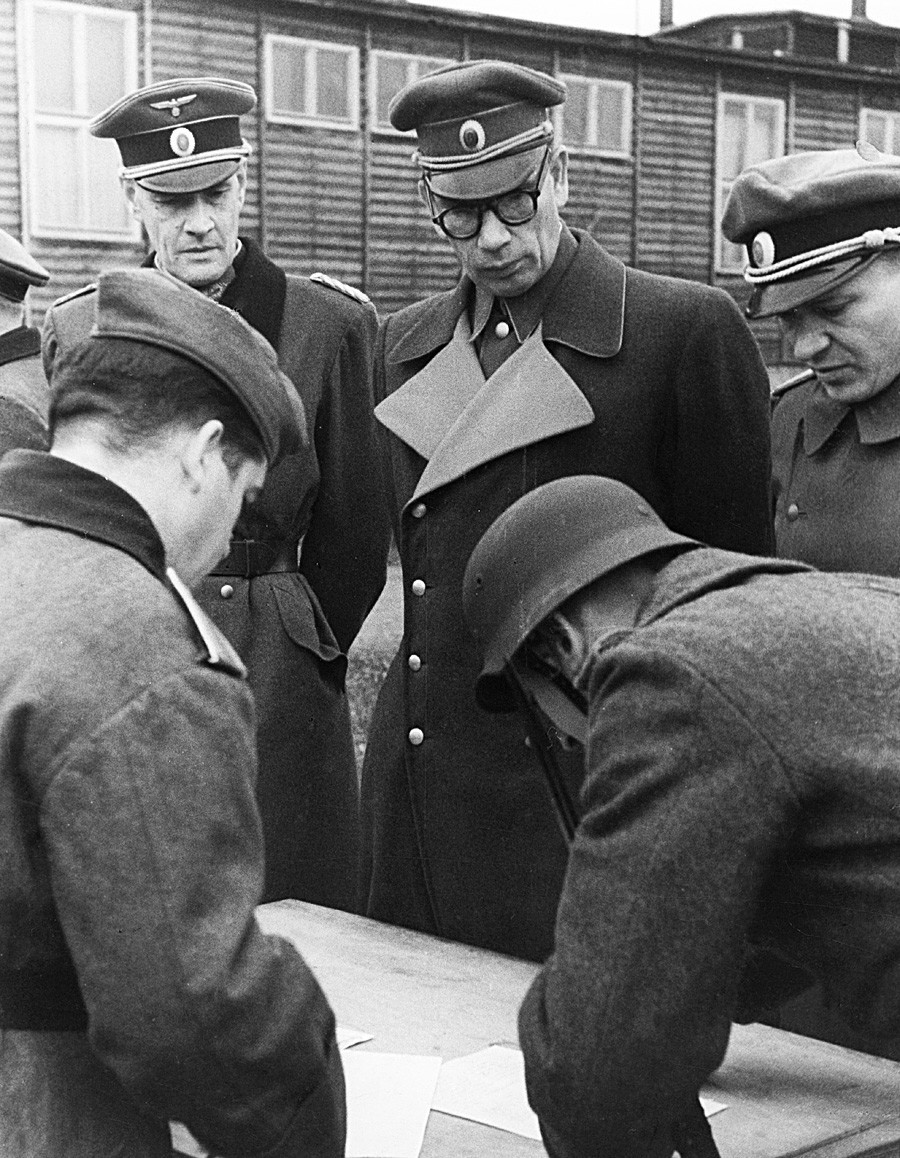 While some gave their lives for their Motherland, others chose treachery. Over one million Soviet citizens and Russian emigrants served within the ranks of the Wehrmacht, SS, Nazi police and pro-German militias.

One such collaborator, known as Tonya the Machine-Gun Girl, personally executed several hundred people. Find out why she peacefully lived in the USSR until the late 1970s.

Hard to believe, but two Russian Jewish emigres somehow became Wehrmacht generals. Read our article to find out how they managed to do so.

A battle of nations 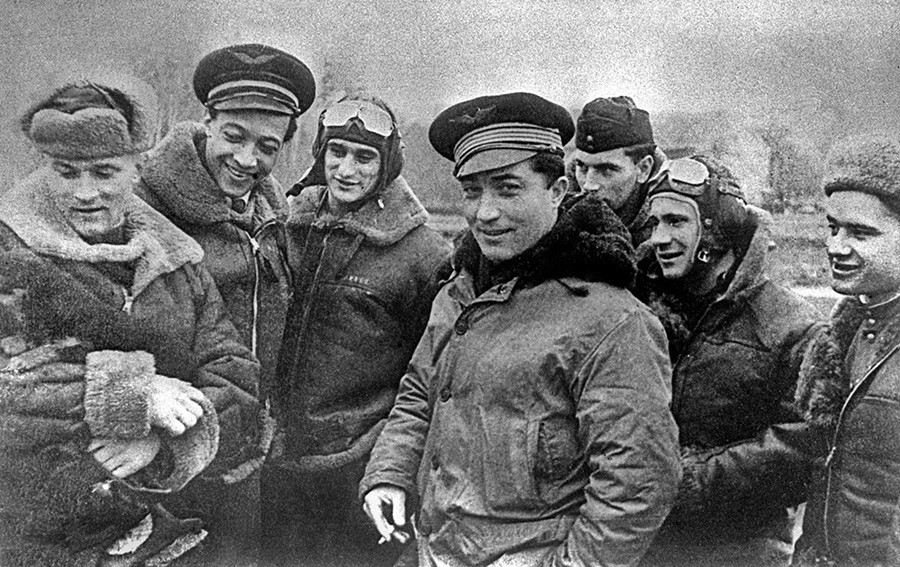 Russian and French pilots during the joint East Prussian military operation in January 1945.

It is well known that Germans didn’t attack the Soviet Union alone, but used a number of allies: Slovakia, Romania, Finland, Italy, Hungary and Croatia. They were also joined by many volunteers from neutral states and even countries occupied by the Nazis.

Thus, French collaborators joined the war “to restore the glory of Napoleon's Grande Armée” and Spaniards sought revenge against the Soviets for their involvement in the Spanish Civil War. Even the Swedes joined the fight, and here you can read why.

However, the Soviet Union wasn’t alone in its fight on the Eastern front. French pilots of the Normandie-Neman Regiment hunted Luftwaffe aircraft in the skies, two Polish People’s Armies and Czechoslovakian Army Corps fought the enemy on the ground, side to side with the Red Army. Poles even participated in the assault on Berlin.

Though the Western Allies fought on fronts far from Eastern Europe, their soldiers occasionally appeared in the USSR to fight with Red Army soldiers. Read how in August 1941 pro-Nazi Iran was jointly occupied by Soviet and British troops, RAF pilots defended the Soviet Arctic and the U.S. Air Force suffered one of its most terrible defeats in its history while using a Soviet airfield for bombing Germany. 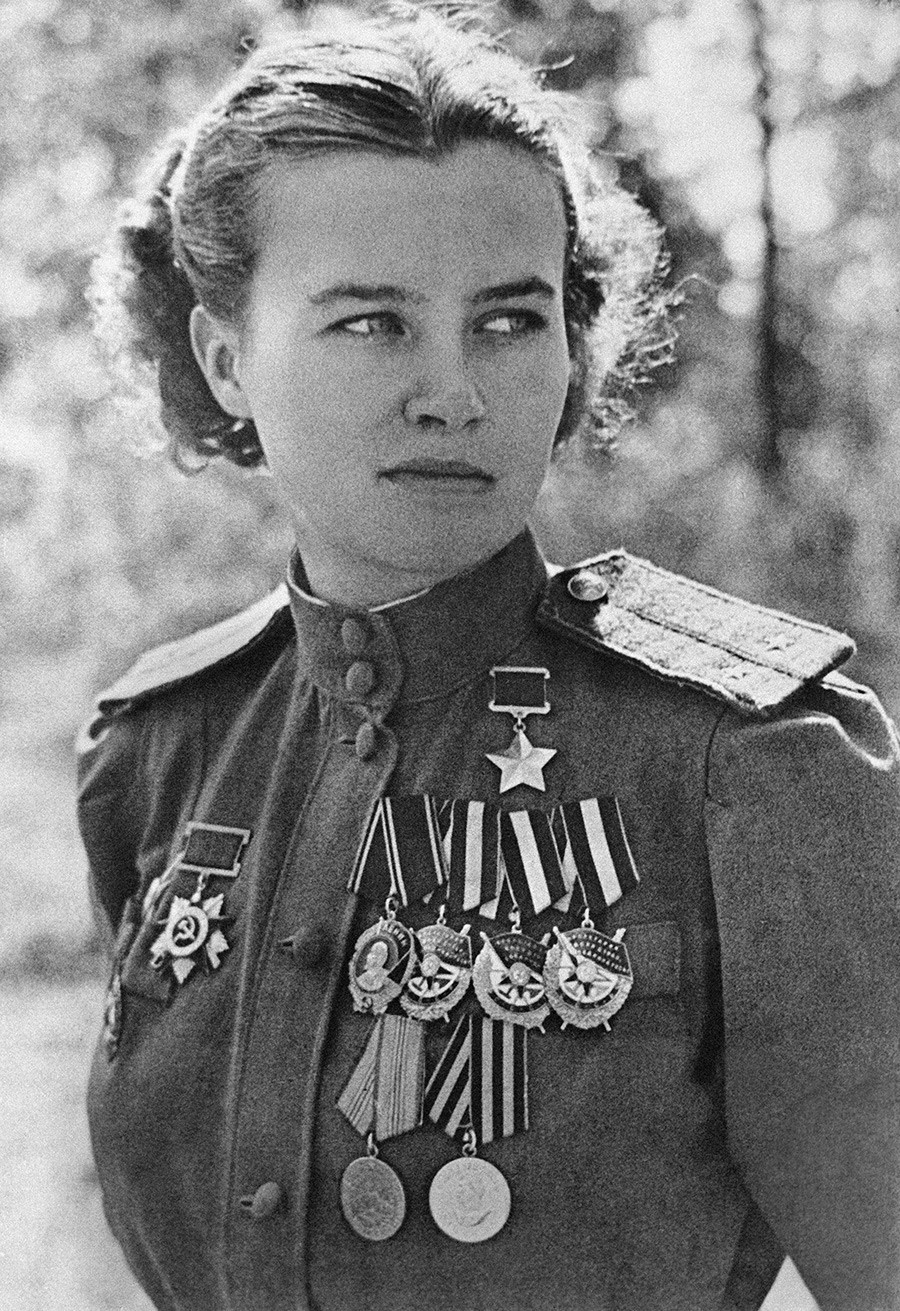 Up to one million Soviet women joined the Armed Forces to fight the enemy, and over 80,000 held commanding posts.

Germans were terrified of Soviet female snipers, who often proved to be very deadly, and they would be truly surprised if told that some Red Army tanks were led by female crews.

Soviet women were also excellent pilots. They flew bombers (nicknamed Night Witches by the enemy) and were fighter pilots. Two of the latter, Lidya Litvyak and Yekaterina Budanova, even were top guns. 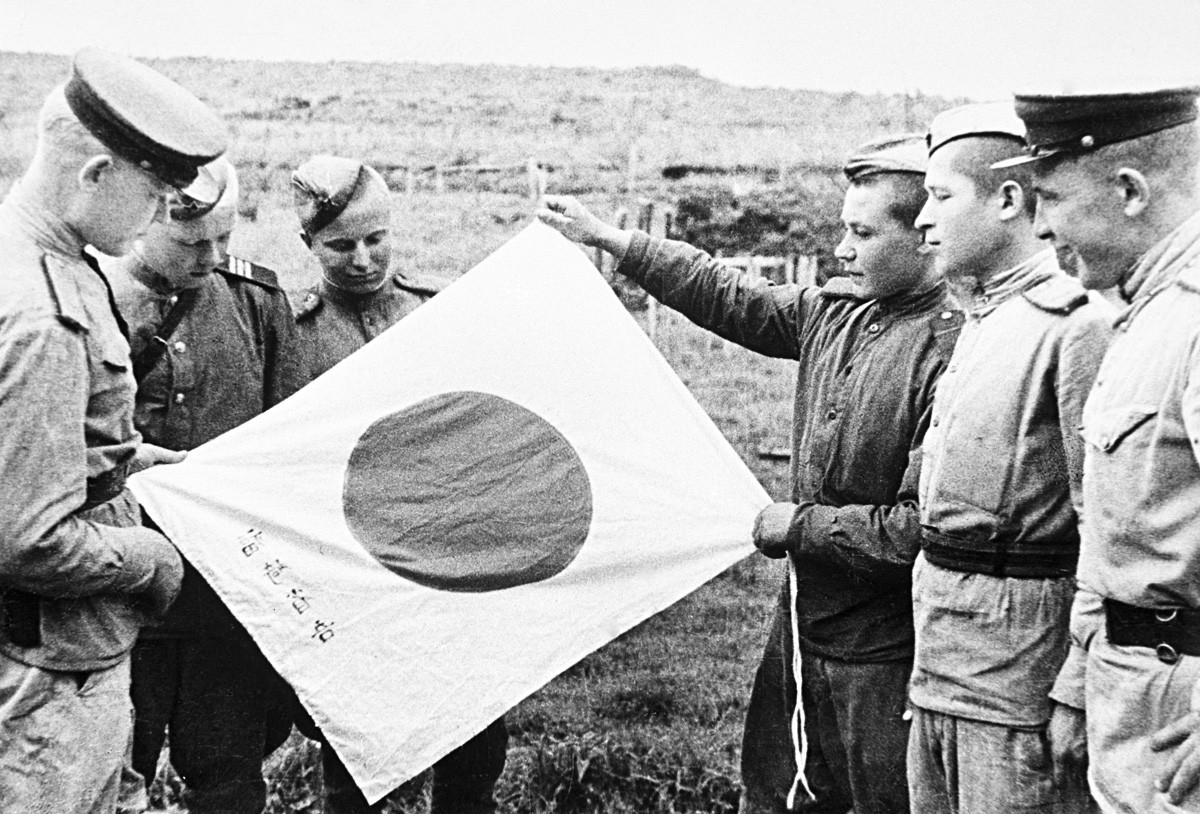 When Nazi Germany was defeated and capitualted, there was one more enemy left. In the three months after the victory over the Third Reich, the USSR attacked the Japanese Empire.

This was another type of war, not the war of extermination as with Germans. Still, the Soviets lost over 12,000 men in that conflict, which lasted less than a month.

Read here how the Red Army crushed the Kwantung Army in Manchuria, and how one Soviet sailor alone captured 5,000 Japanese soldiers.