Yes, this photo is fake. But the suicidal aerial stunt was real 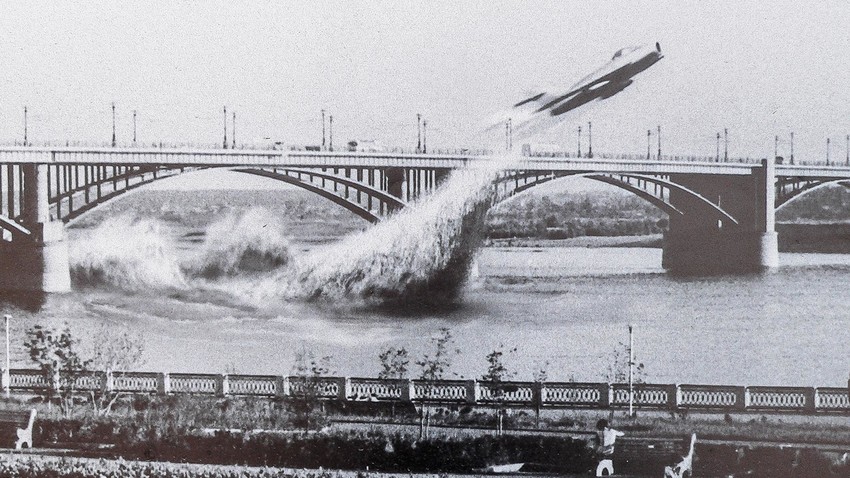 The Novosibirsk museum
A Soviet ace pilot did indeed fly under this bridge and was able to dodge severe repercussions.

On a hot summer day on June 4, 1965, a town beach in Novosibirsk was crowded and the embankment adjoining to the Ob river was packed, too, when the people heard a growing rattle.

Suddenly, a military jet appeared in the sky, reached the water and raced towards the October bridge that lies across the Ob River. The onlookers froze: a catastrophic collision seemed imminent…

When Valentin Privalov was only 6, Nazi Germany invaded the Soviet Union. The boy, who lived near Moscow, witnessed how the enemy troops marched through his land. It was then when he first saw a military airplane in action.

“One day, two Polikarpov I-16 planes flew over my head, almost touching the rooftops of houses below. Before that, I hadn’t even seen a train. This was the beginning of my dream,” said (link in Russian) Privalov many years after the bridge incident that would make him an image of the notorious daredevil of Soviet aviation.

Privalov followed his childhood dream and by the age of 20, he became a lieutenant of marine aviation serving in the Baltic where he got used to flying over bodies of water — a routine that some other pilots may find challenging.

A few years later, Privalov was transferred to Siberia where he flew from, among others, the Novosibirsk airport. He and his fellow pilots often spent free time relaxing on the very town beach where shocked onlookers would later witness Privalov’s suicidal stunt. 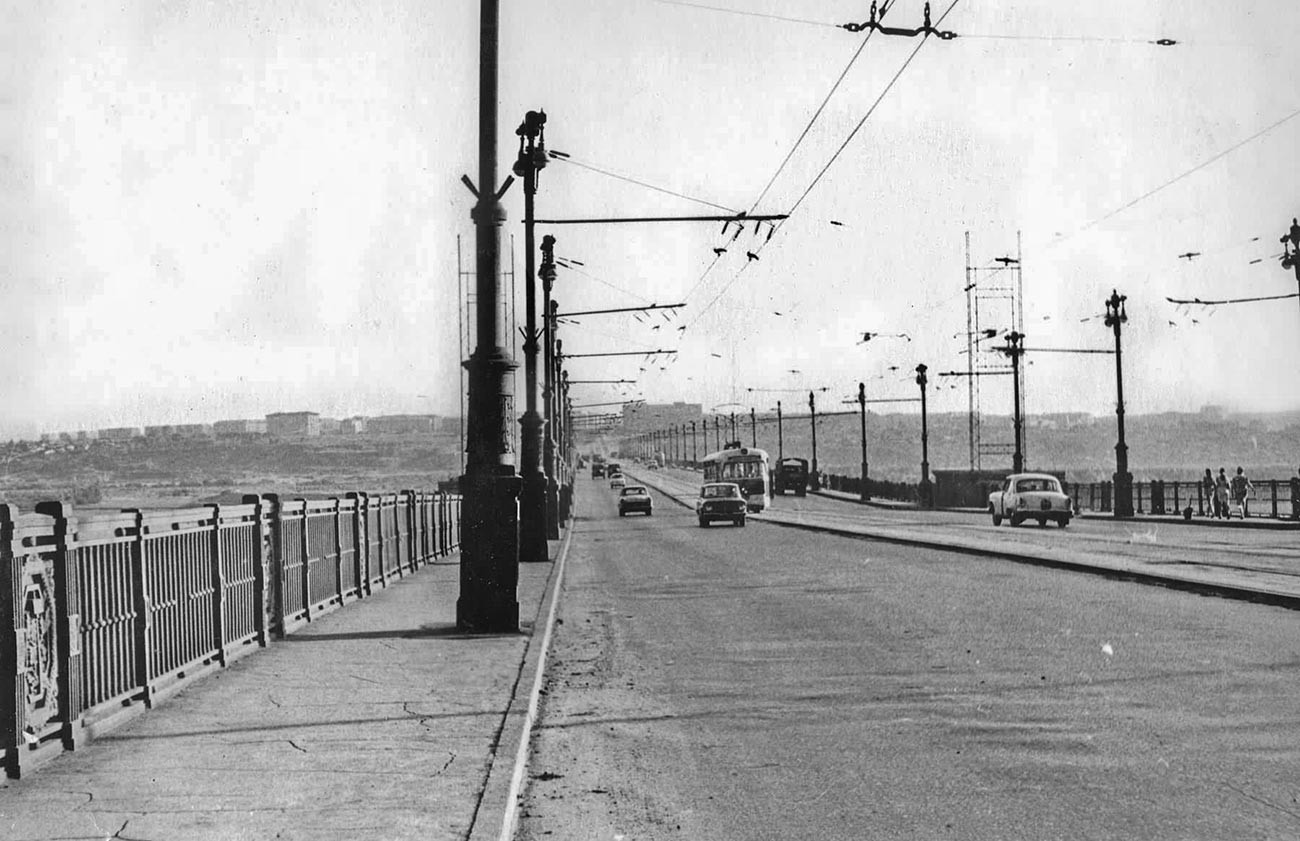 The October bridge in Novosibirsk.

“The idea of flying under the bridge came to me a long time ago. But I knew that if I did it I would be suspended from flying,” said Privalov.

A gift of fate

On June 4, 1965, Privalov and three other pilots had an order to fly a route within a 30-minute interval between the planes. When Privalov’s MiG-17 high-subsonic fighter jet departed from the airdrome, the pilot had to navigate in the clouds.

“When I received an order to descend I pierced the clouds and suddenly saw this very bridge. That was it. I didn’t belong to myself anymore. It looked as if fate had given it to me,” said Privalov.

Naval training gave Privalov confidence that he could correctly estimate a safe distance from the surface of the river, so the pilot went full throttle. Flying one meter above the water, Privalov reached the speed of 700 km/hr to make the jet extremely responsive to controllers.

The bridge arch that the pilot has chosen as his “gates” was 30 meters high and 120 meters wide. 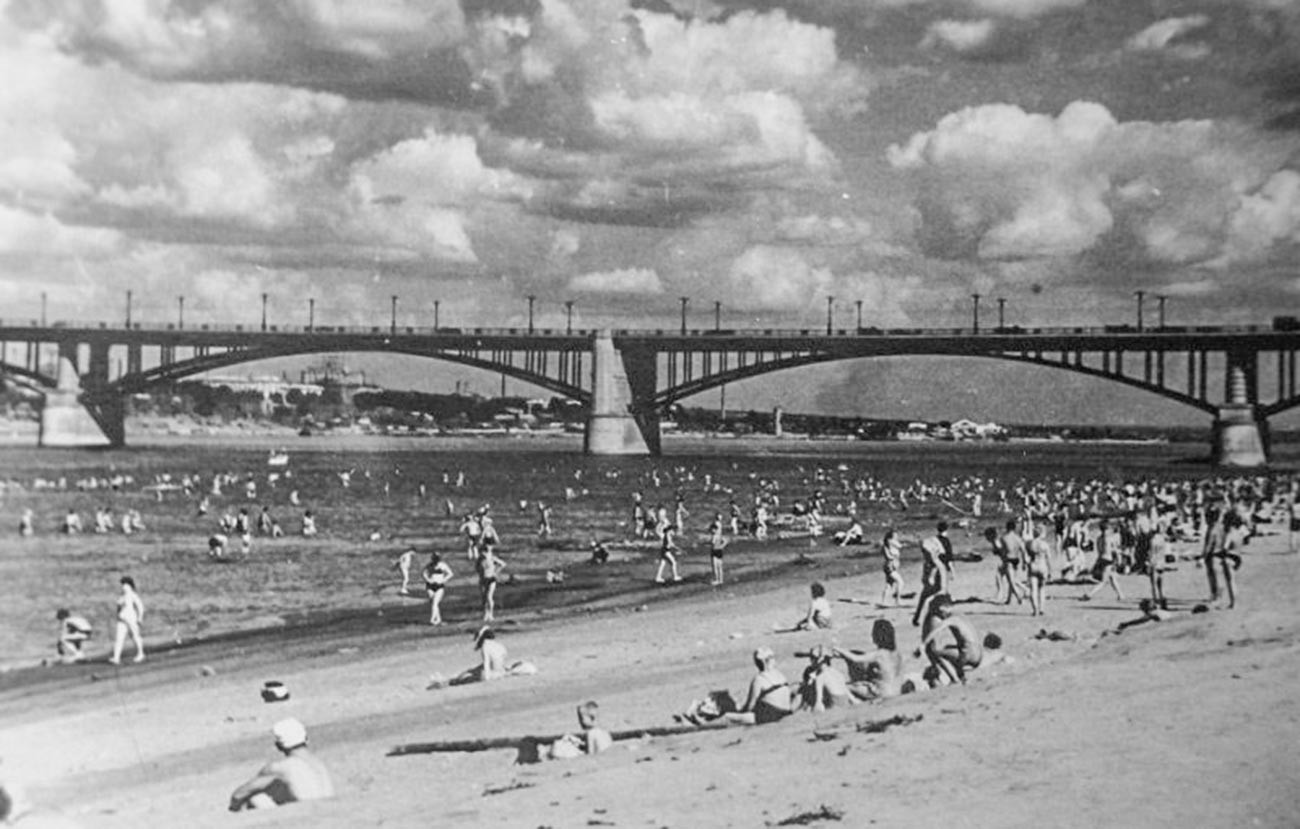 The October bridge in Novosibirsk.

“The most interesting thing is that when you approach the bridge, it is logical to assume that the closer you get the wider space would appear. But for me it was the opposite: the window [of the arch] narrowed and narrowed further. But I was very calm. […] As soon as I felt that the bridge was behind me, I pulled the controller towards me and went up into the clouds,” said Privalov.

Privalov was so excited that he barely noticed the shocked onlookers and naively thought that his escapade would have been unnoticed.

Soon enough, all four pilots who participated in the training flights were put under arrest and a commission was formed to investigate the incident. The culprit was immediately exposed.

Privalov was escorted to Eugene Savitsky, a former fighter pilot who now was air marshal of the USSR. Savitsky was inspecting an airplane factory in the city where the incident had taken place.

“Of course, he gave me a good verbal thrashing,” said Privalov. Ironically, the factory where the disciplinary conversation took place was named after Valery Chkalov, an iconic Soviet test pilot notorious for his mischievous escapades.

The Marshal was accompanied by two aides who secretly told Privalov that he should not worry: the high command had decided to resolve the incident positively for him.

In a week, Privalov’s military unit received an order from the Minister of Defense of the USSR Rodion Malinovsky: “Do not punish Privalov further. The disciplinary measures [already taken at the factory] suffice. If he didn’t have vacation, give him a leave for 10 days. If he had vacation, give him 10 days of rest in the unit.”

Privalov, who soon resumed his flying work, could only have guessed his courage and audacity had pleased heroic Soviet Marshal Malinovsky who, it seems, was no stranger to taking bold risks.

As for the famous photograph of the stunt that became viral on the internet years later, it is undoubtedly fake: the proportions of the plane against proportions of the bridge are false, and the plane’s tilt angle is too steep to be true at this low altitude. 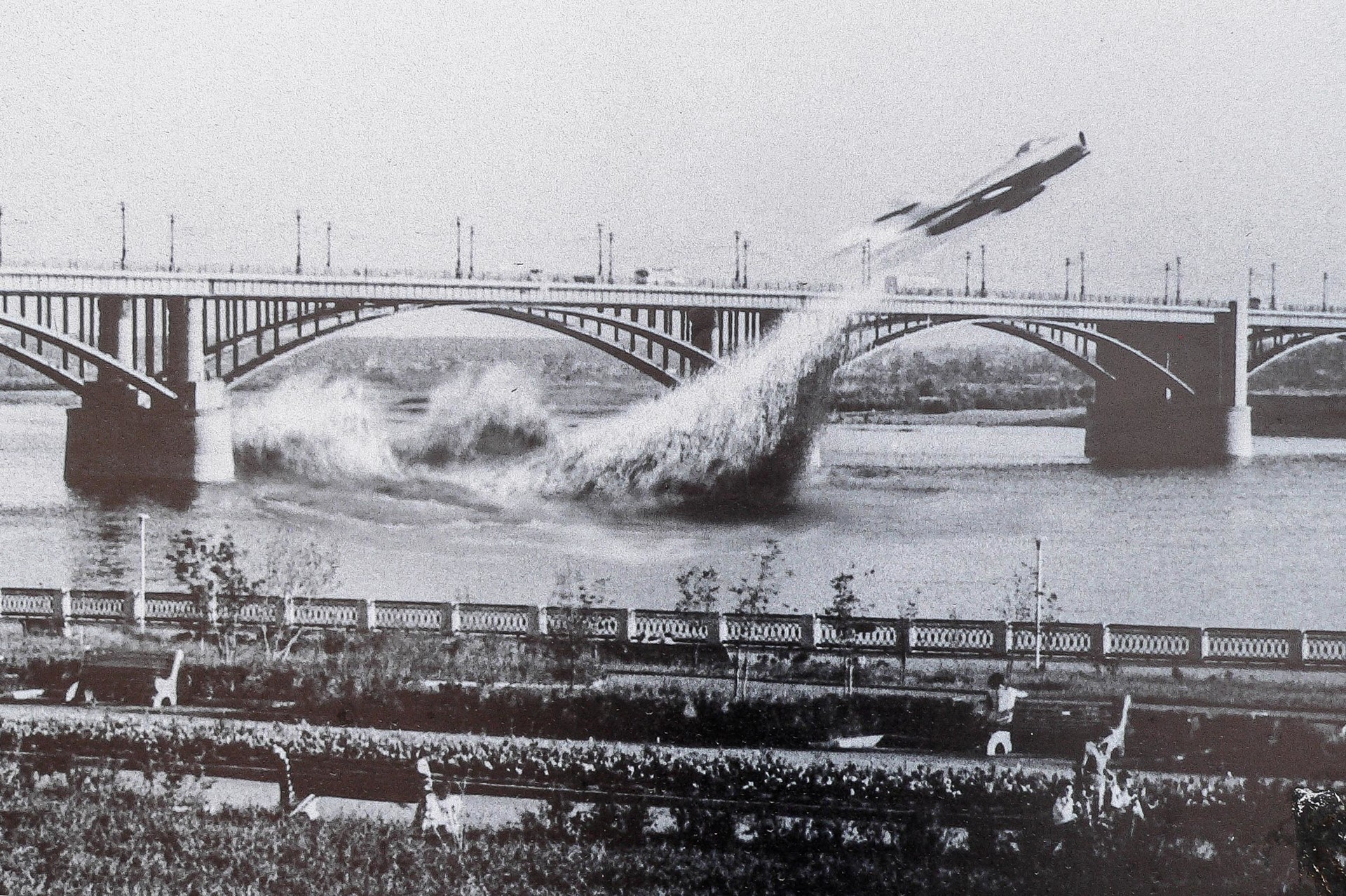 According to one version, the fake snap was created by designer Eugene Sotsihovsky for the Novosibirsk museum.

According to one version, the fake snap was created by designer Eugene Sotsihovsky for the Novosibirsk museum. “Proportions were intentionally distorted so that nobody in sound mind could imagine it was real,” said local historian and the museum’s employee Konstantin Golodyaev.

Another version has it that the snap was created by the order of a local newspaper to illustrate an article about Privalov’s crazy stunt. 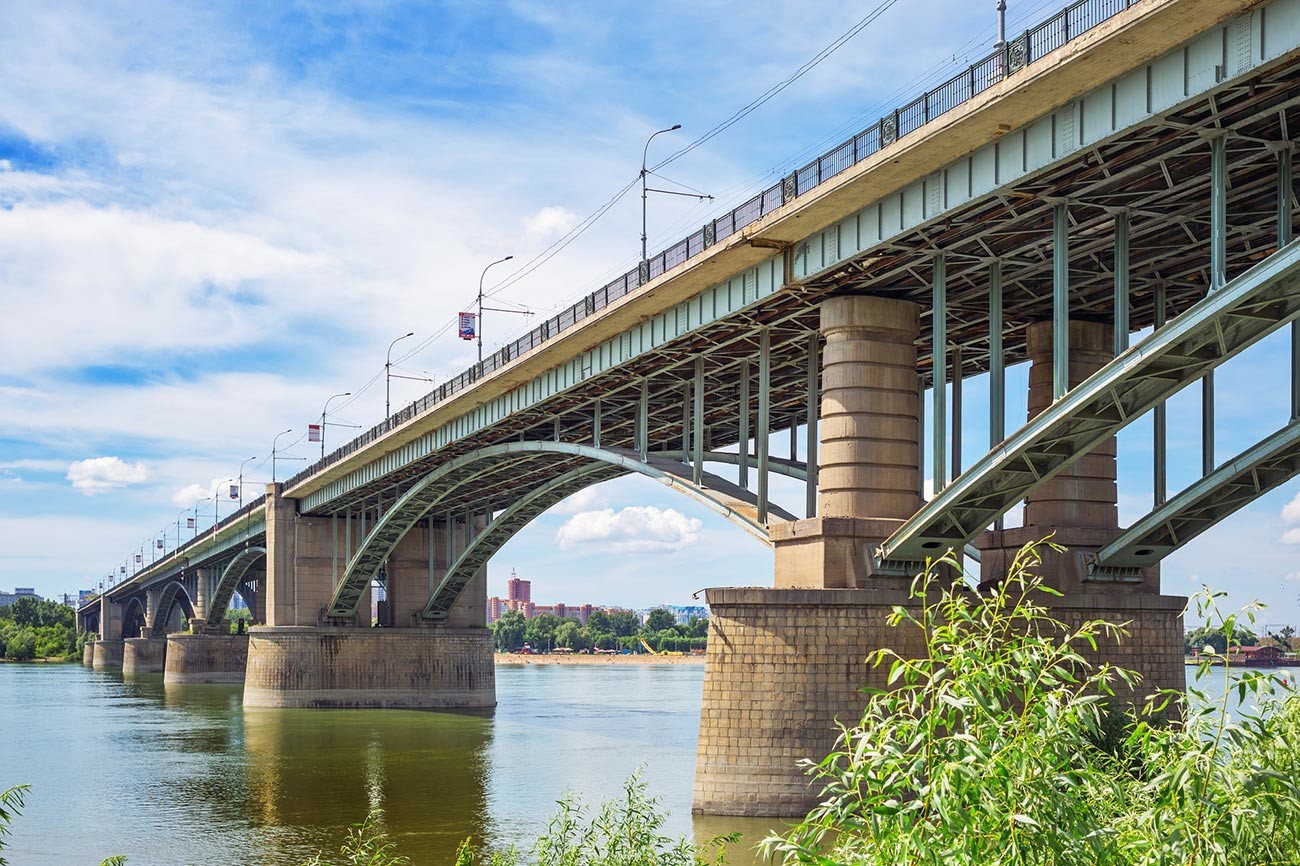 This is how the October bridge looks today.