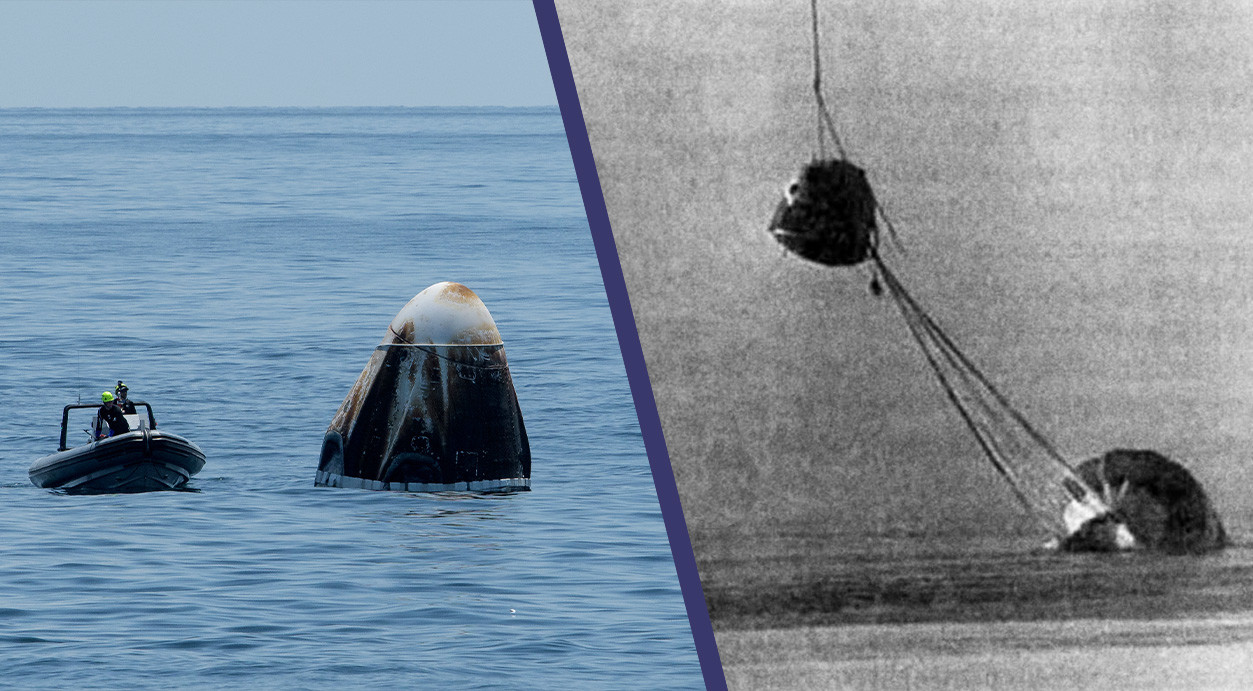 Reuters, archive pjoto
When, on August 2, 2020, the Crew Dragon manned spacecraft landed in the Atlantic Ocean, it was the first such landing in 44 years. Until then, the last crew to carry out such a manoeuvre was the crew of the Soviet Soyuz-23 spacecraft - although, in their case, a water landing had not actually been planned.

On October 14, 1976, the Soyuz-23 manned spacecraft was launched from the Soviet Baikonur Cosmodrome (now situated in Kazakhstan and leased out to Russia). The crew consisted of two members - commander Vyacheslav Zudov and flight engineer Valery Rozhdestvensky. The flight mission was to dock with the orbiting Salyut-5 space station to carry out scientific and technical research.

In his book ‘Space Catastrophes. Pages from a Secret Dossier’, Russian journalist cosmonaut Mikhail Rebrov points out that an unpleasant smell and malfunctions had been reported aboard the Salyut-5 and the new crew was expected to carry out a full inspection of the station and fix these problems. 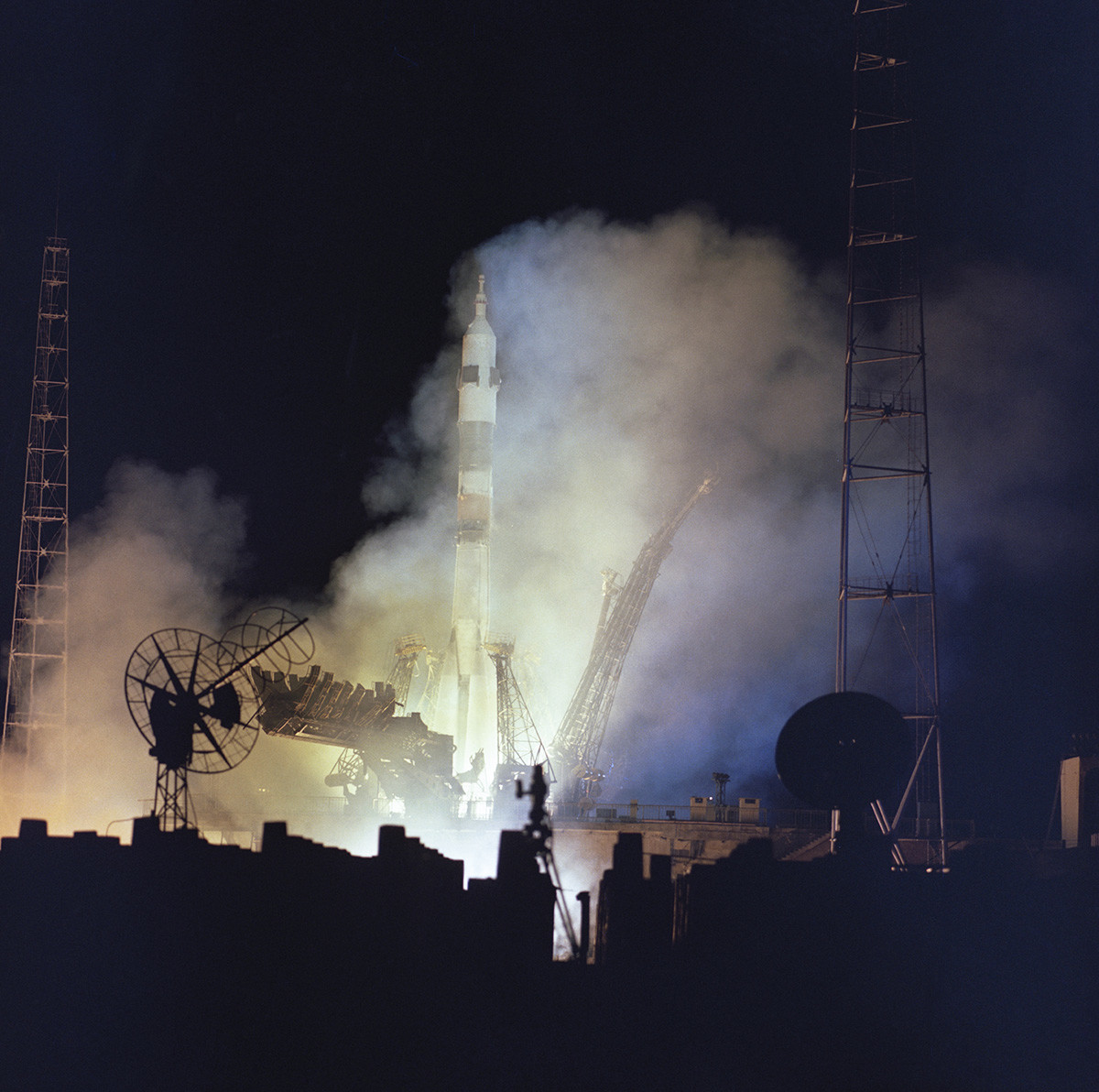 October 14, 1976. A night launch of the carrier rocket with the Soyuz-23 spacecraft at the Baikonur cosmodrome

The flight to the station took two days and there was only enough fuel for three days at the most. On October 16, problems emerged during a docking attempt - the Igla automatic docking system malfunctioned, because the programmed data about the movement parameters of the craft and station did not correspond with the real values.

So it was deemed impossible to dock Soyuz-23 to the station without taking a risk and the commander decided to return to Earth.

Landing had to be done quickly while there was still enough fuel. For landing, the flight commander on Earth chose the town of Arkalyk in Kazakhstan. When the spacecraft started descending over southern Africa, Flight Control Center dispatched helicopters with rescue teams to the intended touchdown area.

Owing to a blizzard, instead of the designated landing area, Soyuz-23 ended up landing in Lake Tengiz in Kazakhstan in temperatures of −20 °C two kilometers from the shore. 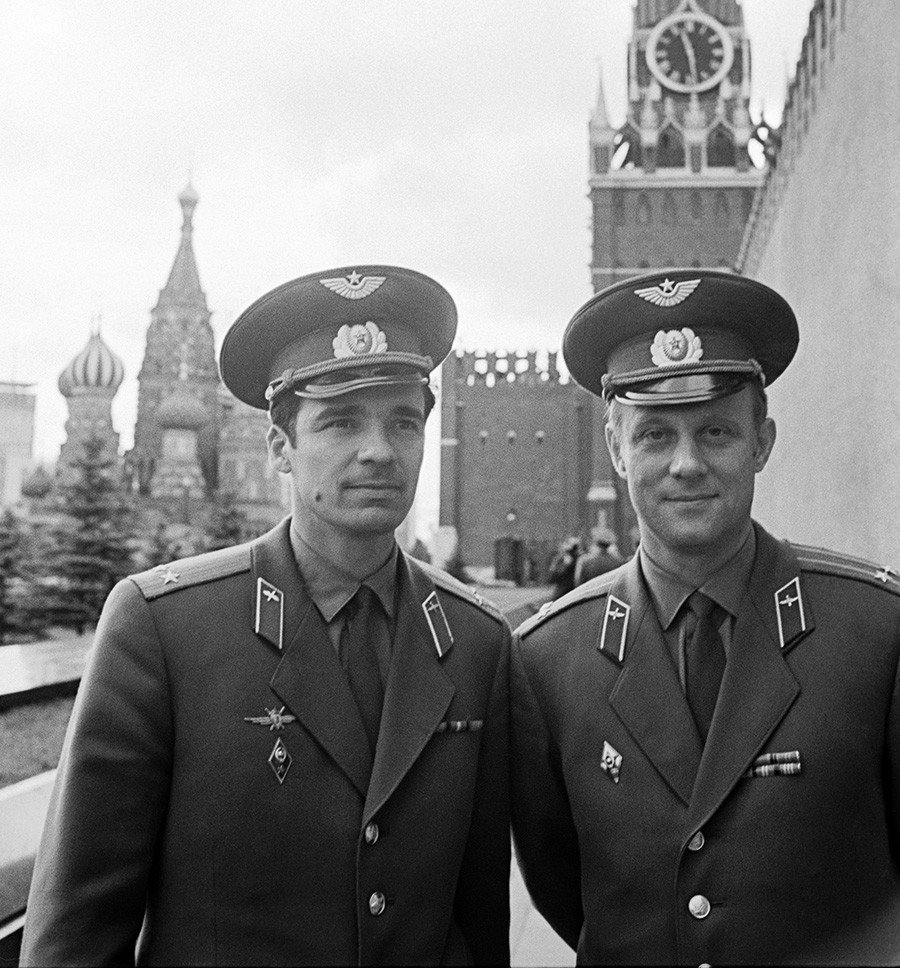 Meanwhile, two boats failed to reach the spacecraft, as they got stuck in the ice of the frozen lake. Salt water then came into contact with the spacecraft’s external connectors, some of which were still live. The capsule’s reserve parachute automatically deployed and, as a result, the capsule overturned and the hatch that was to be used for the cosmonauts’ exit ended up submerged. 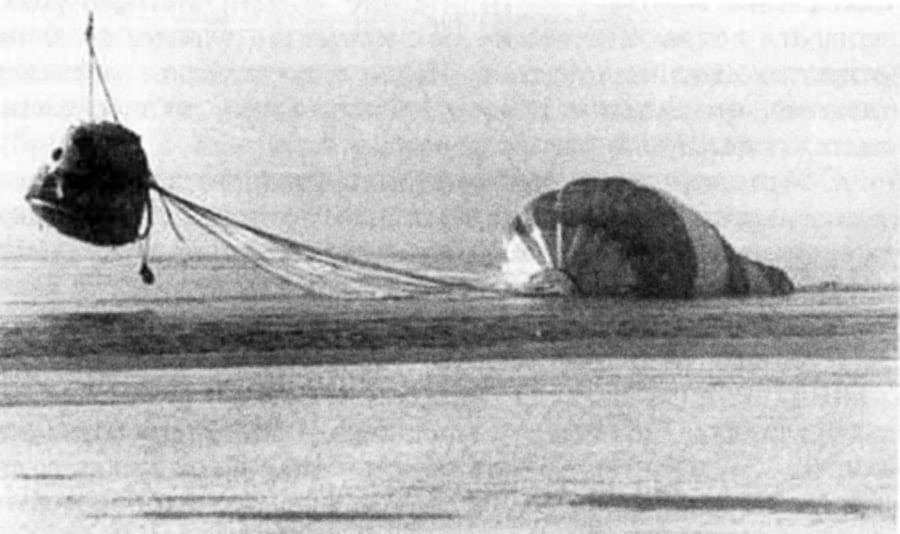 Towing the device with a parachute by helicopter

“Two hours after the reserve parachute deployed, the crew experienced the first symptoms of oxygen starvation, which was gradually leading to asphyxiation, because of the accumulation of carbon dioxide. Zudov and Rozhdestvensky, who were periodically contacting the rescuers, were breathing heavily, wheezing could be heard through the microphones and their voices were becoming unrecognizable,” according to the Aerospace Equipment Testers internet encyclopaedia website, which cites one of the members of the rescue operation, instructor Iosif Davydov.

The snow that was falling soon stopped and the temperature dropped to -22 C. The rescuers and helicopter crews lit fires in order to keep warm. Then, Rozhdestvensky reported in a croaking voice that Zudov had lost consciousness from asphyxiation.

Only a single boat managed to get to Soyuz-23. In it was Mi-6 helicopter commander Capt. Nikolai Chernavsky. But he was suffering from the cold himself and couldn’t reach the cosmonauts, because of the overturned position of the capsule. 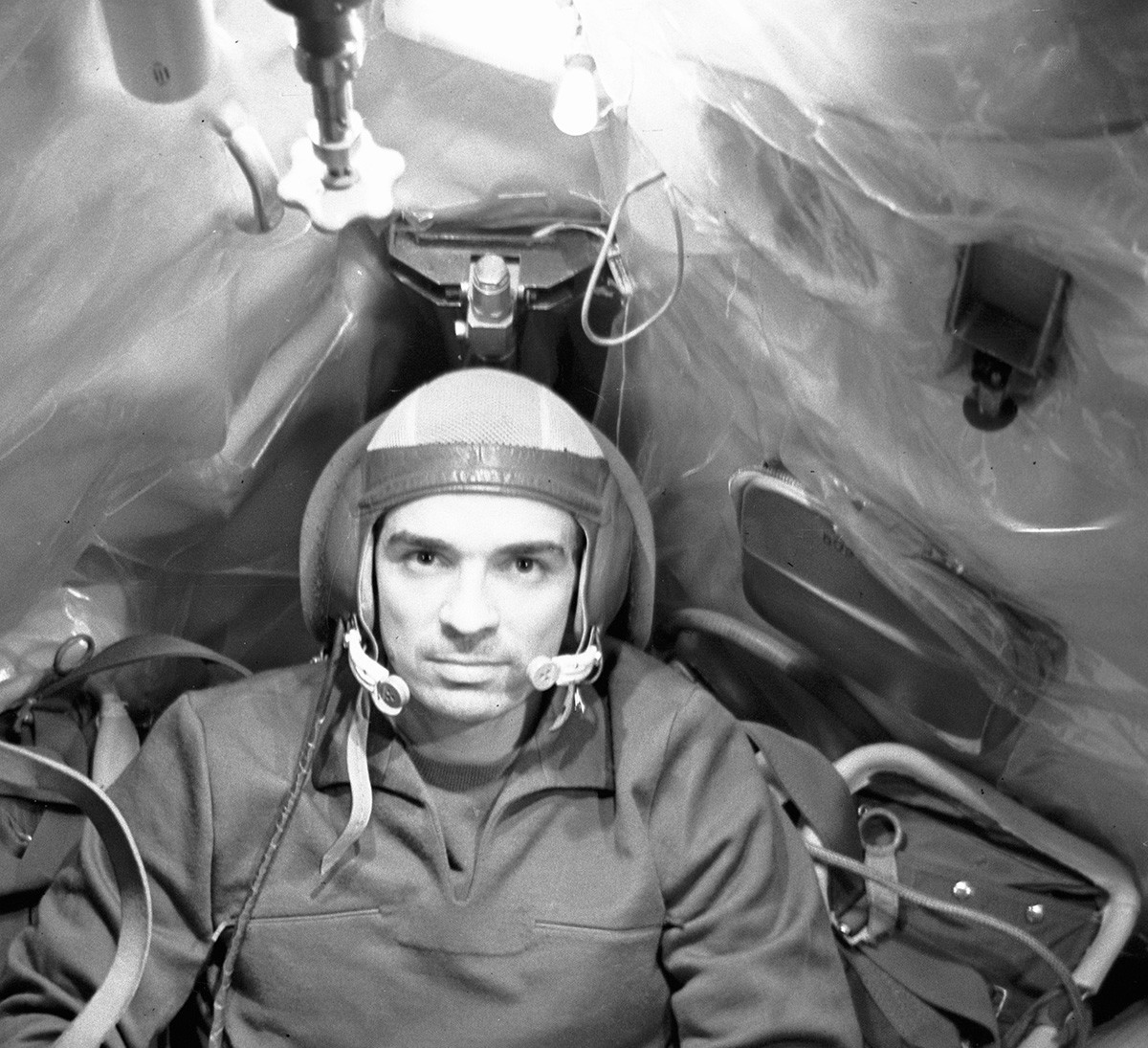 Nearer to dawn, another rescue helicopter reached the capsule. It had flown out of Karaganda, and was commanded by rescue helicopterman Lt.-Col. Nikolai Kondratyev. TASS news photographer Albert Pushkarev was also on board.

It was this helicopter, under the command of instructor Davydov, that managed to attach a cable to the craft and drag it to shore.

“Then, through the hatch, the pale exhausted face of Vyacheslav Zudov appeared. He smiled. He was helped to the ground, and then Rozhdestvensky was dragged out after him. He didn’t look too good, either. Never known for having much colour in his cheeks, Valery Rozhdestvensky was now white as a sheet, with black rings around his eyes. They were both shaking with cold, their teeth chattering,” Davydov recalls. 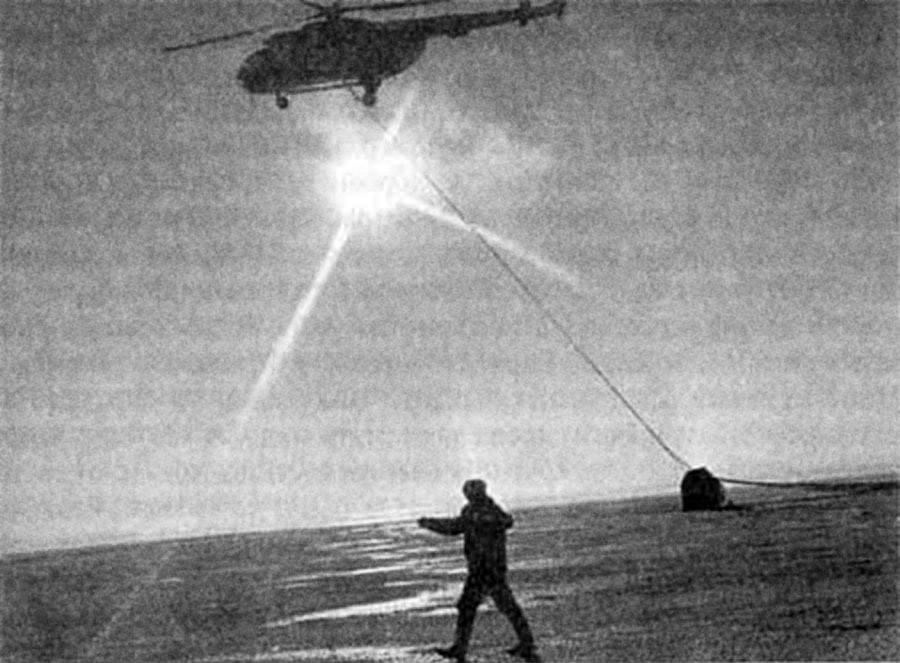 Towing the device with a parachute by helicopter

Davydov recounts how TASS photographer Pushkarev ran up to craft at that moment. Despite the fact that the cosmonauts needed urgent hospital treatment, he asked for them to be helped up and made to smile, so that on the photograph they would look like “cosmonauts and not duffers”.

The rescue operation had lasted 12 hours. Neither Zudov nor Rozhdestvensky went up into space again.

Valery Rozhdestvensky served at the Cosmonaut Training Center until 1992, was a keen rower, retired with the rank of colonel and died in 2011.

Vyacheslav Zudov also served at Flight Control Center in different capacities until 1991, and simultaneously worked as presenter on the ‘Znai i Umei’ (“Know How”) TV show on Central TV. He is now 78 and is retired. 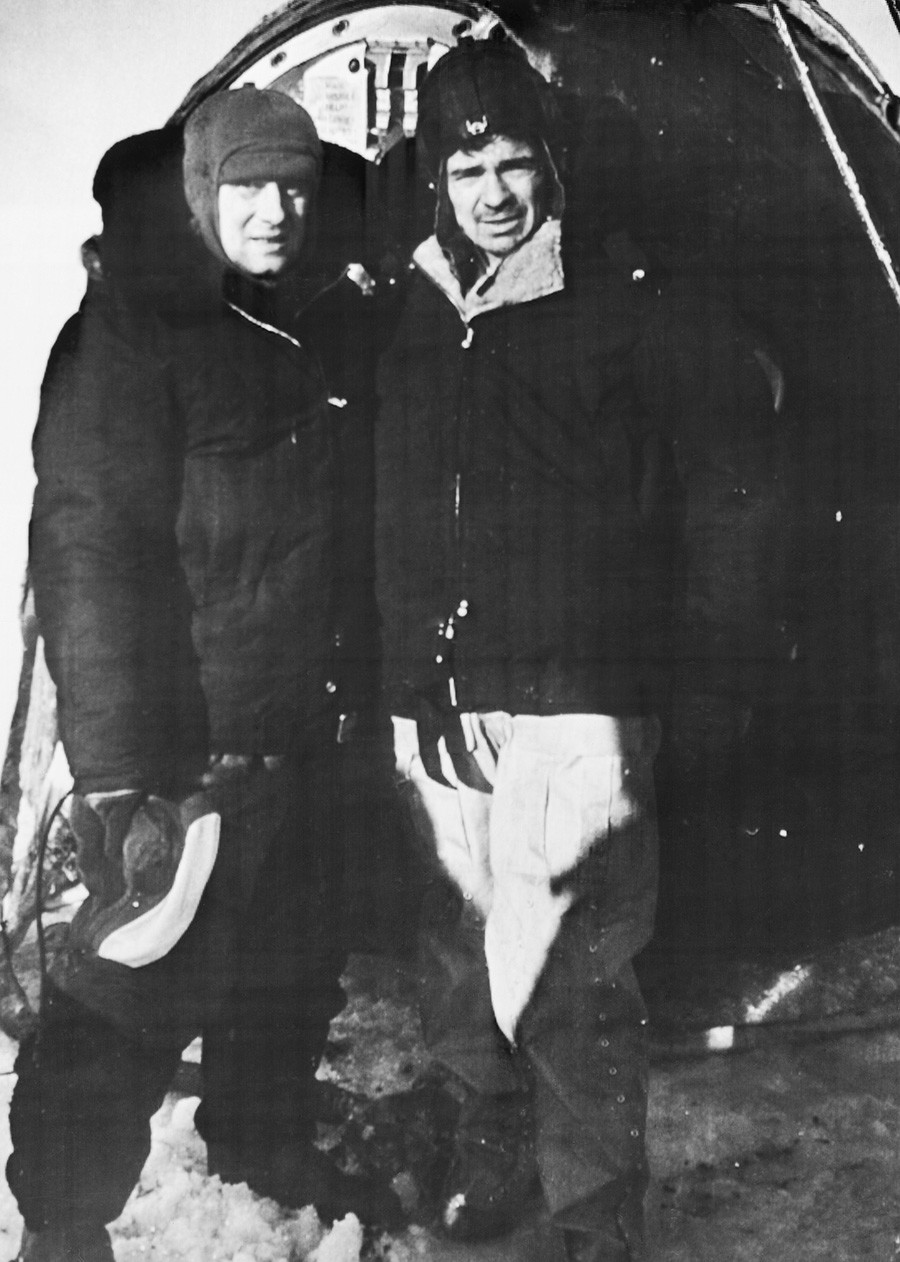 The crew members of the Soyuz-23 spacecraft, commander Vyacheslav Zudov and flight engineer Valery Rozhdestvensky pose for a photo after the landing on the surface of the Tengiz Lake

In 2019, Zudov said in an interview with a Nizhny Novgorod news website that he was pleased the era of the space race was over.

“We are engaged in joint work on the International Space Station, in the development of which 14 countries took part. It is a positive step towards ensuring that mankind lives in peace. Working there, people do not feel the negative things happening on earth,” Zudov said. 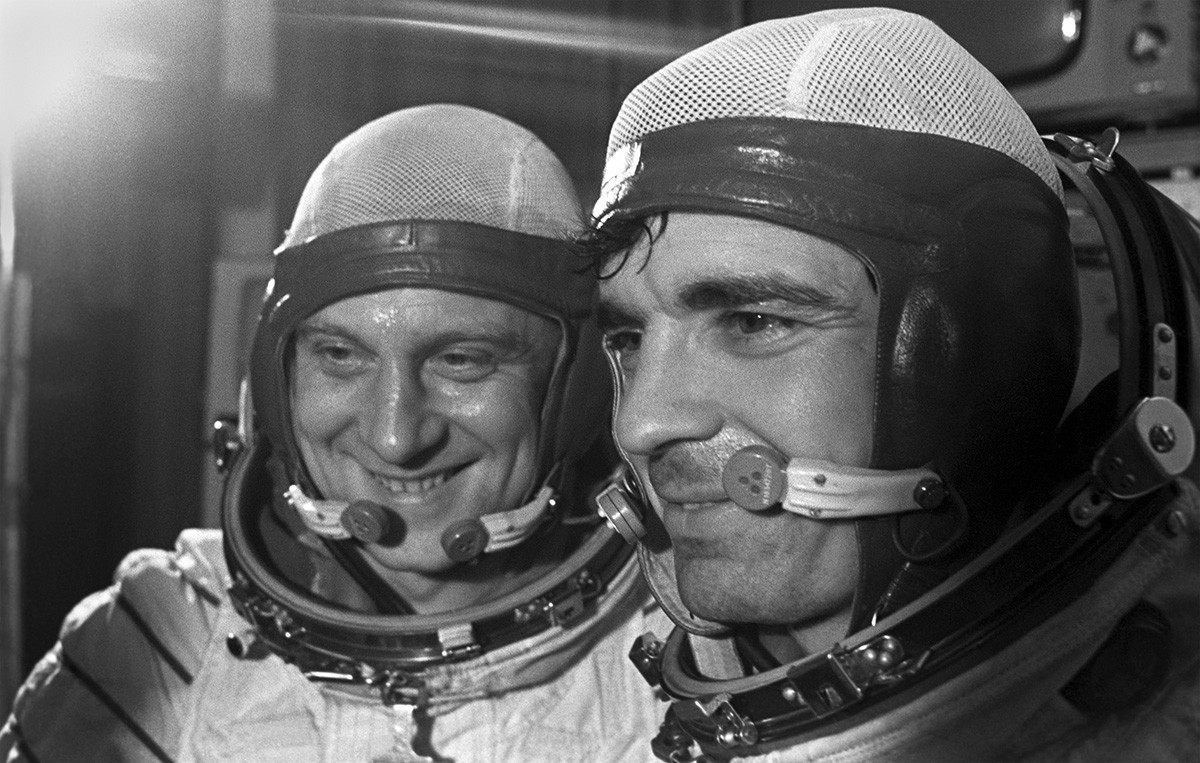