The 1962 mass murder the USSR covered up 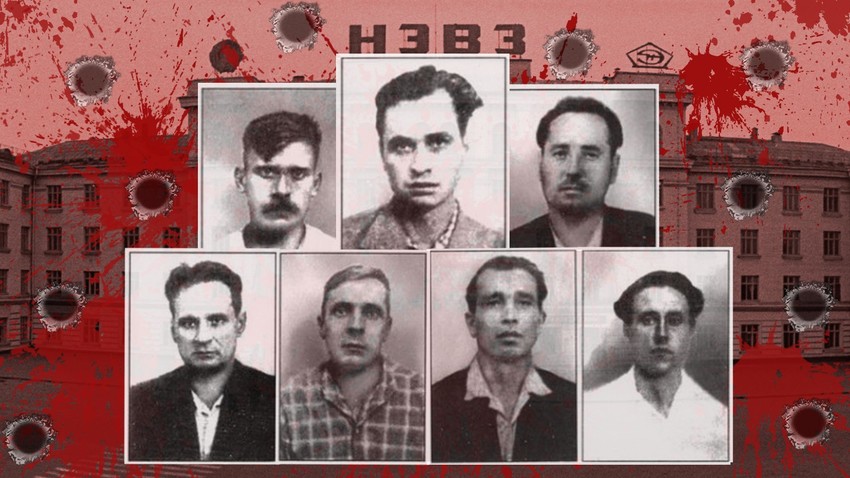 Russia beyond; Archive photo
26 dead, dozens wounded, 7 executed and hundreds sent to jail. In 1962 in the southern Russian city of Novocherkassk, a protest by unarmed workers was violently put down by the Soviet army. These events were kept secret for decades, until the fall of the USSR.

Sergey Sotnikov was 25 in 1962. After he finished 7th grade, he went to work as a machinist at the Novocherkassk Electric Locomotive Building Factory. His father died in the war, his mother was a nurse in the hospital. Sotnikov was a member of the Communist Party, a devoted worker and a father of two little girls. He did not have a criminal record. The family lived in poverty – when a KGB investigator later tried to make an inventory of the Sotnikovs’ property, he had nothing to describe.

On June 1st, 1962, Sotnikov was among the protesters at his factory, and suggested encouraging workers at other plants to also go on strike. He then joined a group of workers who went to another factory and tried (unsuccessfully) to reason with the workers there to join the strike.

Sotnikov was sentenced to death by shooting, one of seven protesters condemned to execution by Soviet authorities after the strike at the Novocherkassk Electric Locomotive Building Factory. The unexplained, insane cruelty of the authorities in this case remains one of the darkest pages in the history of the USSR. These disgusting events were kept secret until the Soviet Union collapsed.

The reasons for the strike 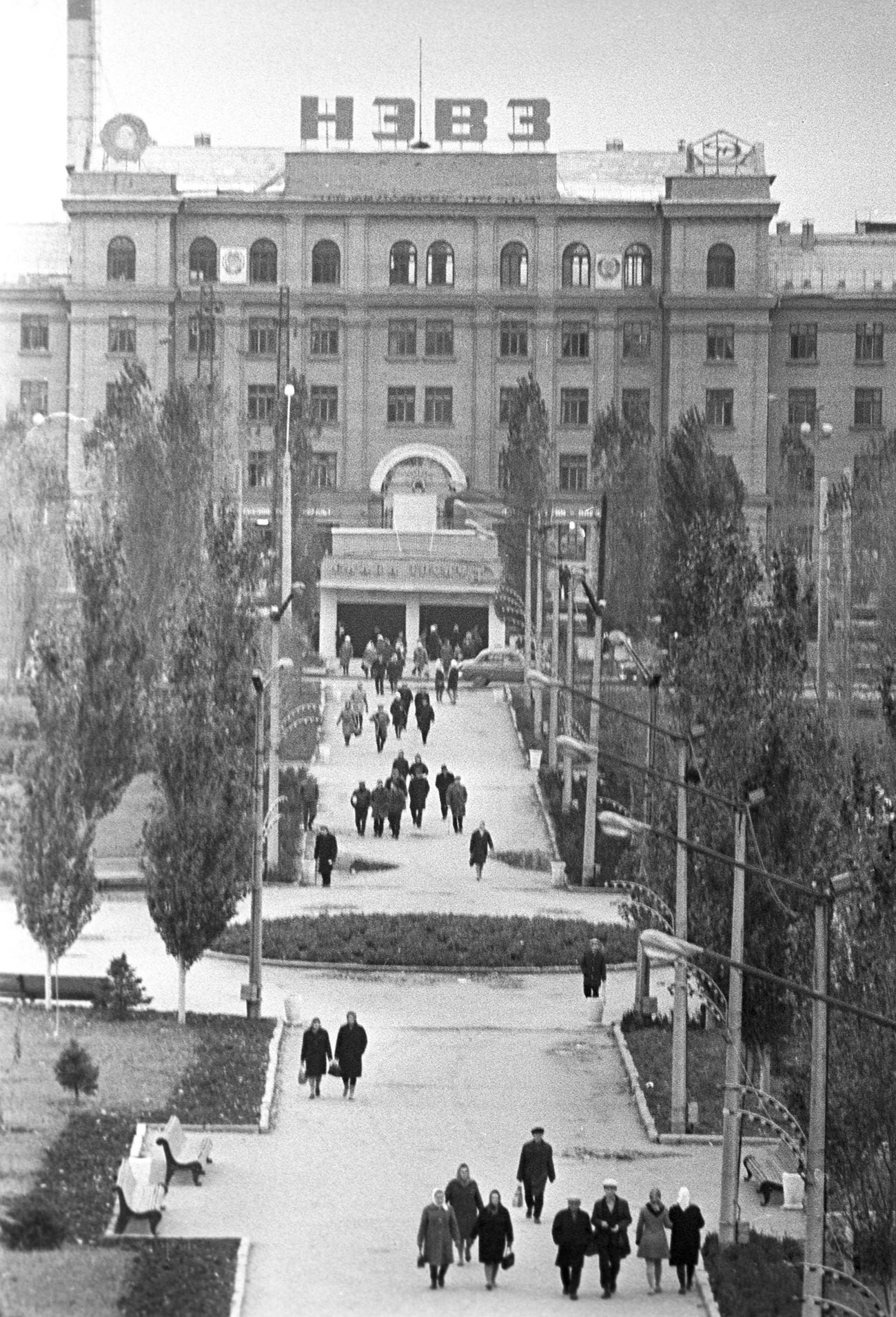 The economic and monetary reforms implemented by the government of Nikita Khrushchev in the late 1950s – early 1960s were rather questionable. Even before the 1961 redenomination of ruble, the Minister of Finance Arseniy Zverev resigned – he thought the redenomination was going to be devastating. And it was. While formally, all money was redenominated 10:1 (10 rubles became 1 ruble), the prices sometimes stayed the same: some products, most notably meat and dairy, increased in price 2-3 times, which was a harsh blow to the poorest people of the USSR - factory workers.

Novocherkassk, Rostov Oblast, was the capital of the free Cossacks in pre-revolutionary times. In 1962, it was one of the poorest regions of the country. The Novocherkassk Electric Locomotive Building Factory (NEBF) was among the most ill-funded factories in town. The workers suffered bad living conditions; there was not enough housing for their families. There were a lot of former convicts among the NEBF staff – they agreed to work for very low wages. All of these conditions combined became the gunpowder that exploded in early June 1962. Unfortunately, the factory’s supervisors and the local authorities didn’t do anything to prevent the uprising until it was too late. 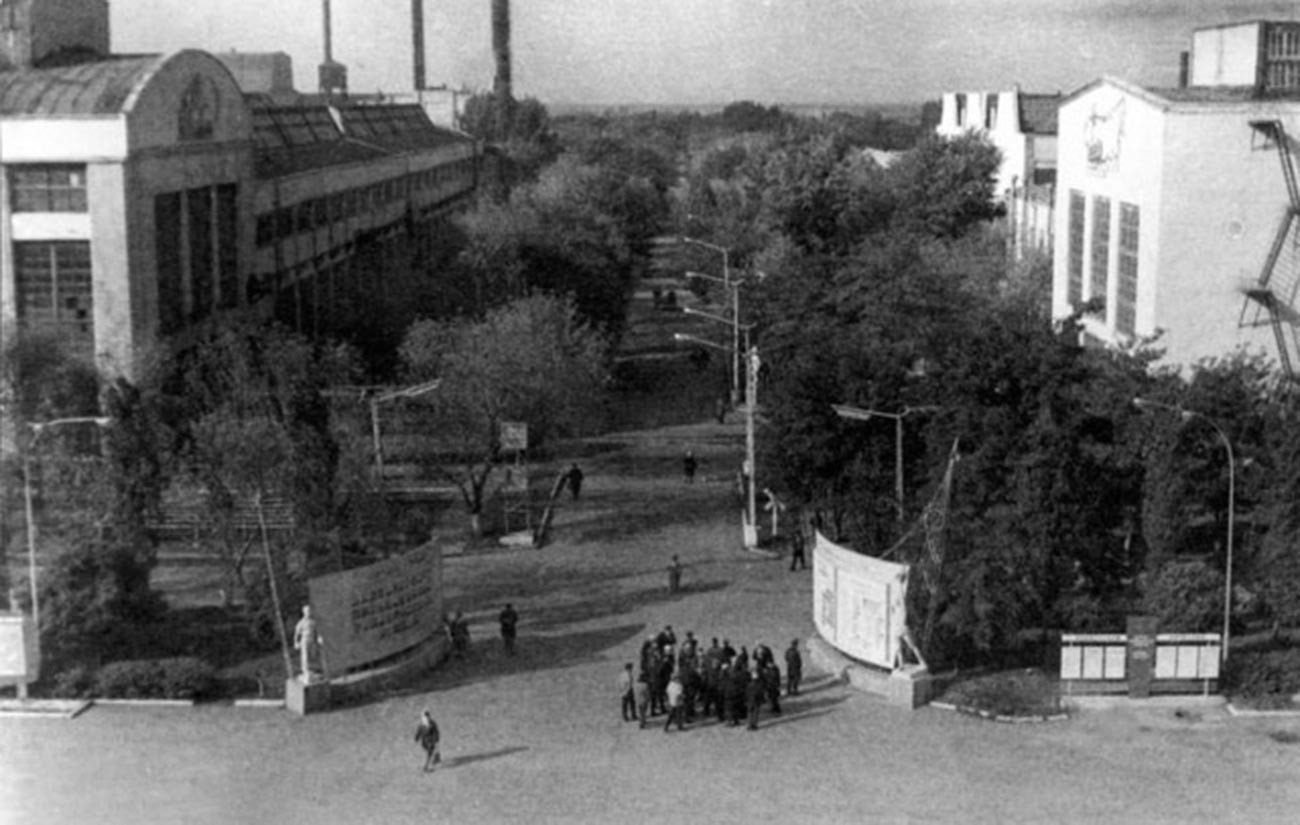 Early on the morning of Friday, June 1st, 1962, the workers at the NEBF learned about another price rise for dairy and meat products. Coincidentally (and obviously, at the unlucky connivance of the factory administration), the day before the workers learned that the performing standards for them had been increased, while wages remained static. At 7:30am, the workers at the steelmaking workshop stopped working and gathered to discuss the situation. But ‘discuss’ would be an understatement. As historian Vladimir Kozlov writes in his book “The Unknown USSR,” the workers “may have put it much harsher than even the KGB was able to report” – they started openly cursing the Soviet administration, the Party and even General Secretary Khrushchev himself, and in those times, that alone was a criminal offense.

Other workers joined the steelsmiths, and the strike continued in the public park on the factory’s territory. The authorities who urged the workers to return to work were ignored and verbally abused. Boris Kurochkin, the factory’s director, went out to calm down matters, but he said a really stupid thing – “If you don’t have money for meat, eat liver patties.” This insult outraged the workers. Kurochkin barely made his way back to the administration building. By 11am the time of the first break at the factory, over 200 workers had joined the strike. 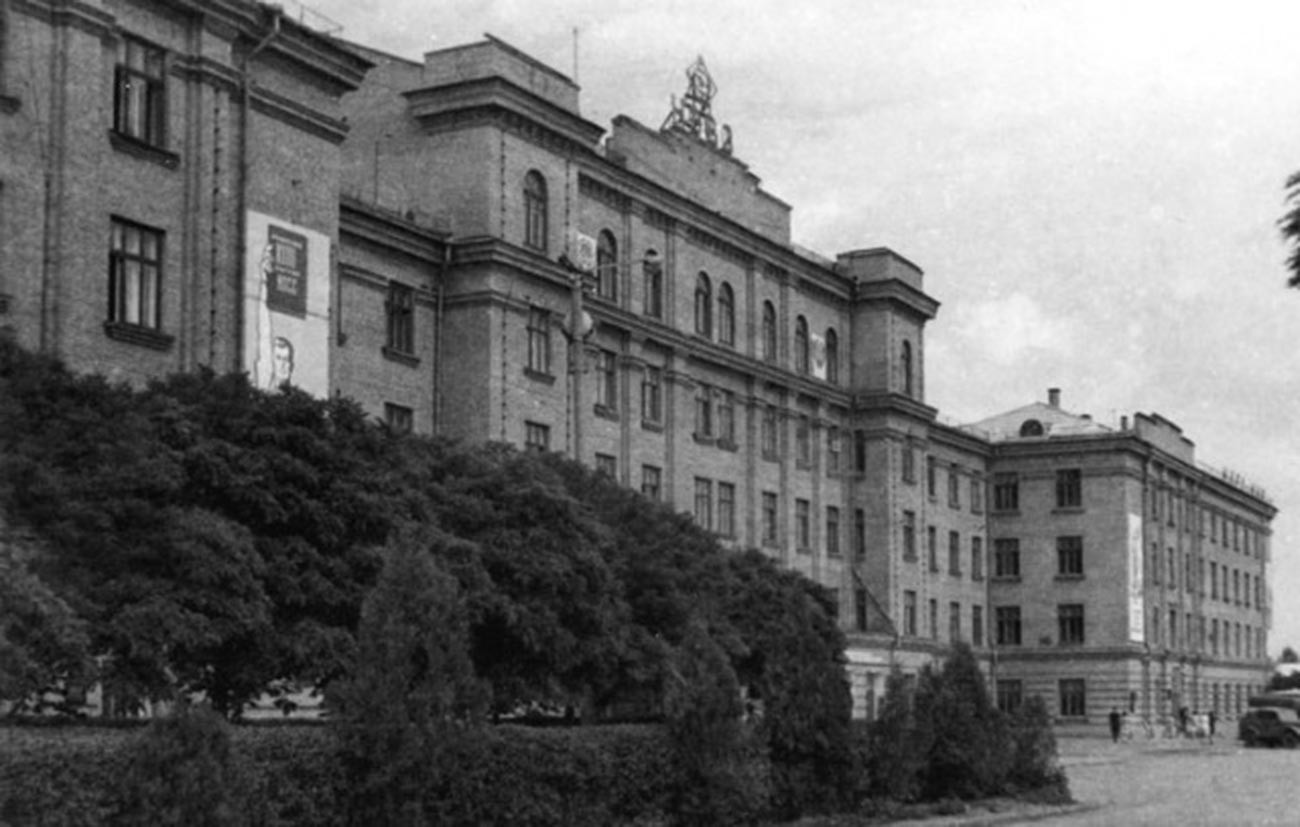 Vyacheslav Chernykh, 24, whose young wife was pregnant with their first child at the time, later told interrogators: “To buy meat, butter, we had to go as far as Rostov. Why was [Novocherkassk] so poorly supplied? One conclusion: not enough attention from the authorities for the needs of the working people…” On June 1st, Chernykh and 15 other workers went to the factory’s control room and engaged the factory whistle at full volume. Then, he and the factory sign painter Koroteev daubed a slogan: “Meat, milk, higher wages!” on a banner and put it high up a pole standing in the factory yard. With this call, the workers’ protest has gained power.

In towns like Novocherkassk, sounding a factory whistle at an odd time meant an emergency at the factory. Soon, even the workers on their day off, any of whom were drinking at home, appeared at the factory square, and a full-fledged uncontrolled riot started. 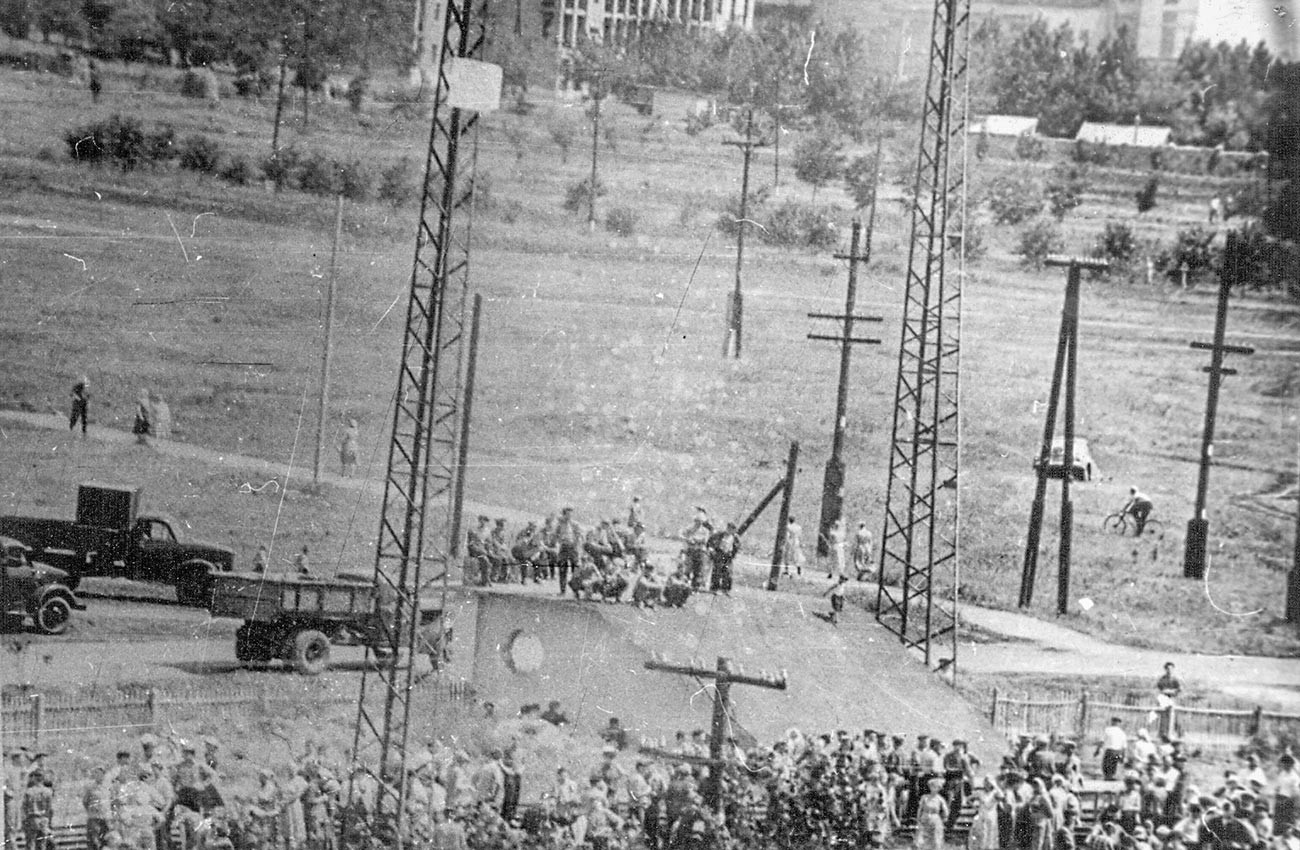 A rare photograph of the actual 1962 strike

By noon, there were 5,000 rioters near the plant. They blocked the railroad line to Rostov, stopping a passenger train. Somebody made a chalk inscription on the locomotive: ‘Khrushchev for meat!’ The events were turning grim very fast. “Meat, butter, higher wages” – chanted the crowd around the train. People improvised protest speeches right there, using the locomotive as a rostrum. Some of these orators were drunk. But most of the protesting workers apparently believed that the authorities would heed their pleas and calls. However, some disillusioned ones like a cleaner named Maria Zaletina, who had three children and a husband who had died in WWII, plainly shouted: “Them fat-bellied pigs! Beat the Communists!”

By 4pm, the authorities of the town and region, including the local Communist Party regional head Alexander Basov, all were gathered in the factory’s administration building, while the workers were storming its doors. They took down the portrait of Khrushchev from the facade and stomped on it. Basov tried to address the raging crowd through a loud-hailer from the balcony, but workers started throwing stones and bottles at him. 200 men from the locale militia were called in, but retreated, outnumbered by the workers. At 8pm, soldiers and three armored personnel carriers appeared at the factory. However, they didn’t attack the protesters: they were there only to draw their attention while the authorities fled the factory. However, even the soldiers didn’t scare the protesters. The soldiers soon left, while the raging crowd stayed in the factory square late into the night, building barricades. 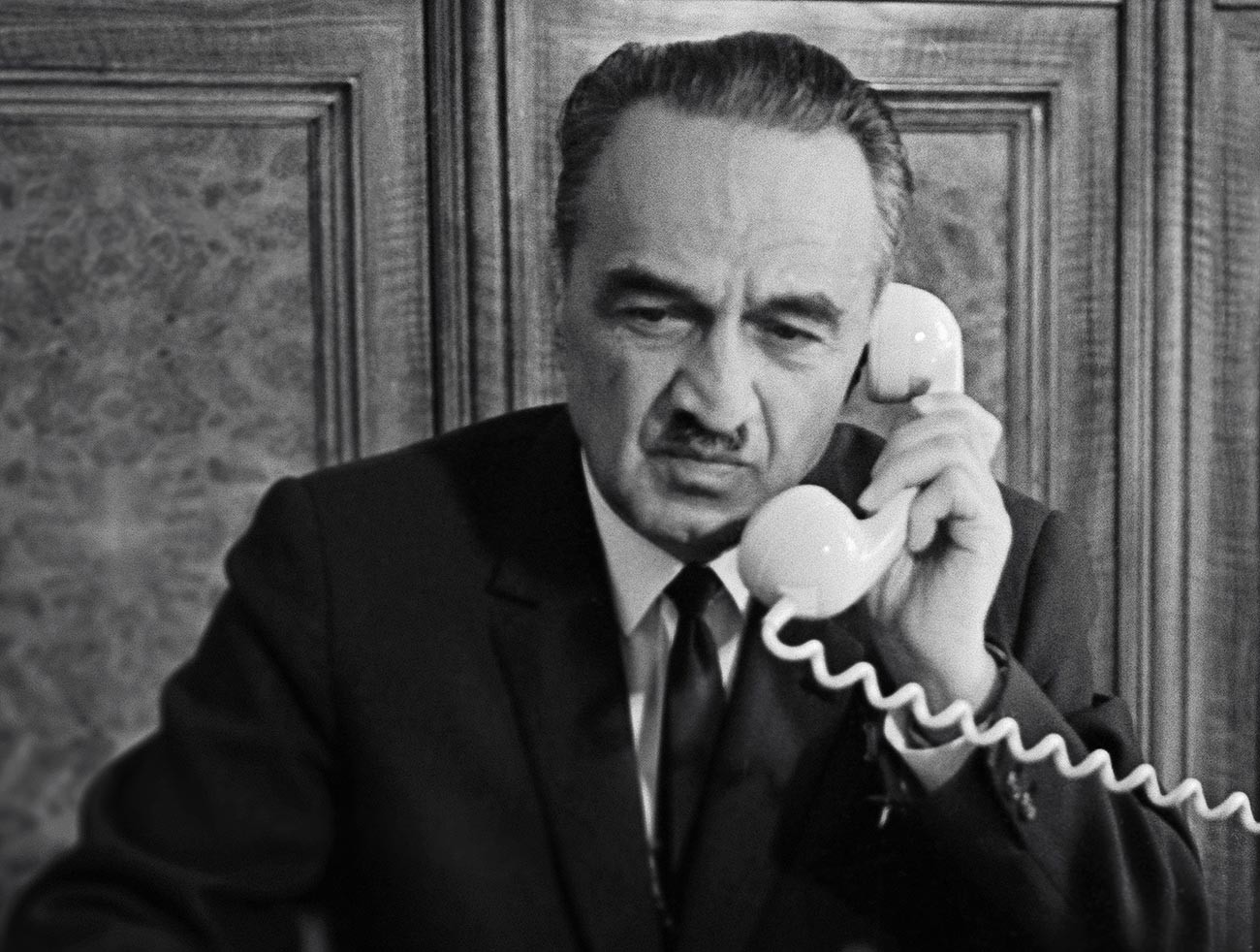 Anastas Mikoyan (1895-1978), First Deputy Chairman of the Council of Ministers of the Soviet Union

In the early hours of the morning on June 2nd, tanks entered Novocherkassk. This scared and enraged the protesters. Some of them attacked tanks with hammers. There were rumours of people being crushed by tank tracks. Meanwhile, a group of the highest party officials from Moscow hastily arrived in Novocherkassk, including First Deputy Prime Minister Anastas Mikoyan, Frol Kozlov and Alexander Shelepin, the Secretaries of the Central Committee of the Communist Party. The strike became a matter of national concern. However, measures were taken so that the strike remained secret outside Novocherkassk. No mass media or newspapers covered the events – Khrushchev feared that the leaked information might outrage the Soviet people in large numbers.

On June 2nd, the workers who casually came to the factory saw soldiers on all entrances and refused to start work “under the barrel of a gun.” The strike resumed. Another train was stopped on the railroad. Other factories of the town joined the strike, and by midday, a vast crowd of protesters headed to the centre of the city, to Novocherkassk’s main administration building, where the Party officials were gathered. The crowd carried red Soviet flags and Vladimir Lenin’s portrait, which symbolized that it was a peaceful workers’ strike to demand their rights. The way of the crowd was blocked by the tanks, but the workers got through anyway. 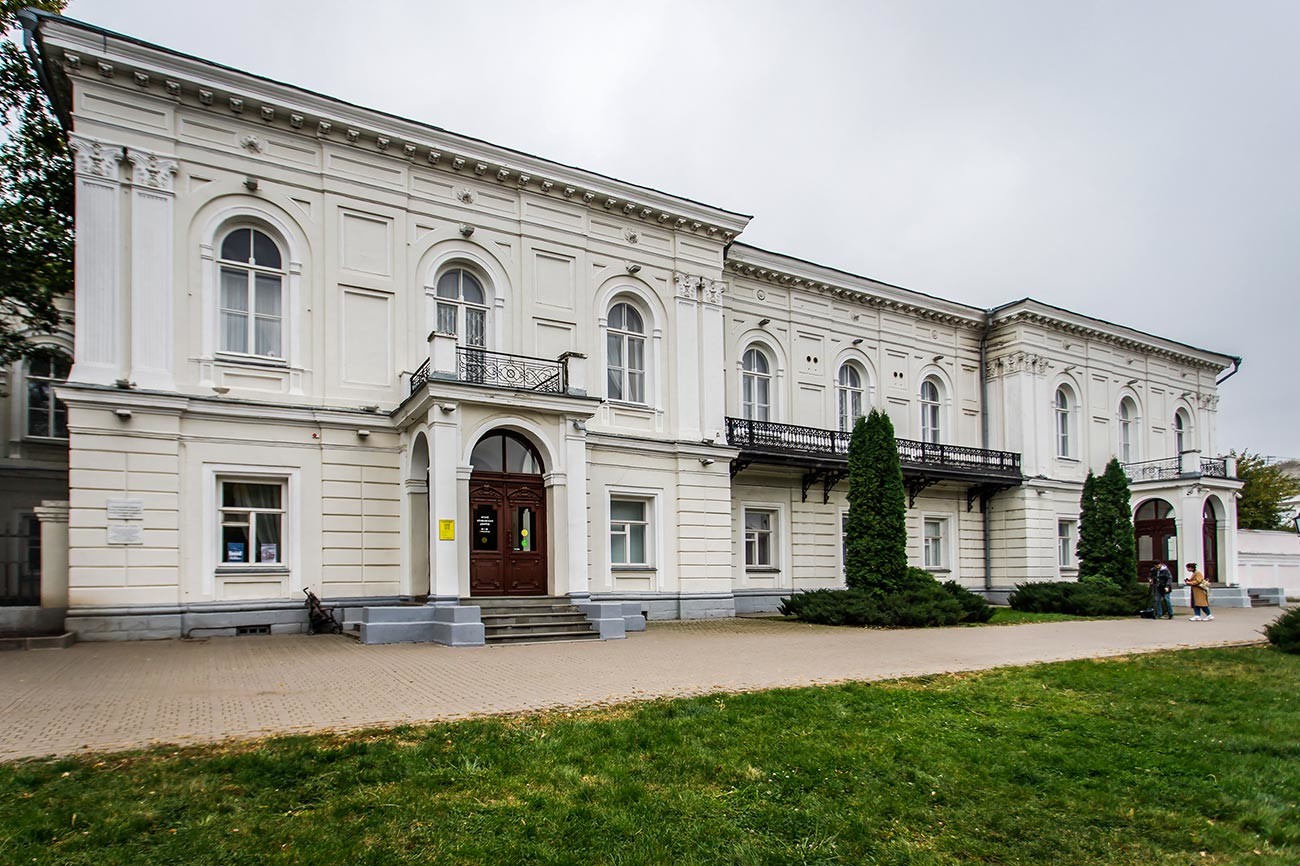 The main administrative building in Novocherkassk, where the shooting happened

The crowd stormed and invaded the administration building, wrecking it and beating bureaucrats trapped inside. They demanded to see Anastas Mikoyan, the second man in the Soviet government. But by then, Mikoyan and other Party bosses had been evacuated, terrified by the workers’ rage. The riot went on. Suddenly, 50 soldiers with automatic rifles appeared before the crowd. Their commander, Major General Ivan Oleshko, addressed the crowd, ordering them to disperse, but he was met only with screams and threats. The crowd pressed on and tried to attack the soldiers. 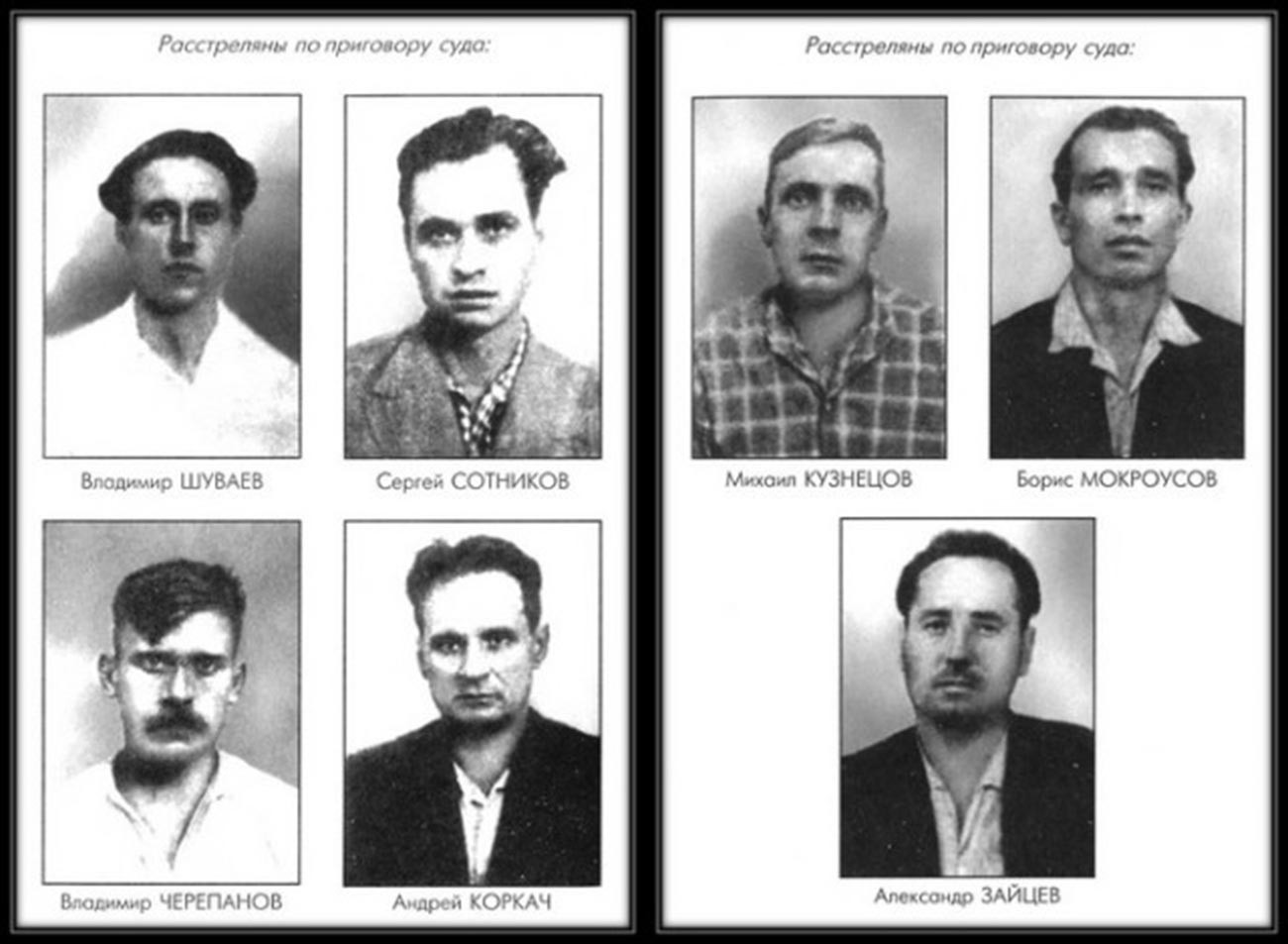 There are mixed accounts of what happened next, but most sources say that after two warning volleys, the troops opened fire on the crowd. Up to 15 protesters were killed on the spot, and an unknown number wounded. The crowd panicked and fled. Rumors spread across the town that soldiers had shot unarmed Soviet workers during the strike. Novocherkassk drowned in silent terror. According to KGB data cited by historian Tatiana Bocharova, 26 were killed and 87 wounded that day. Immediately after the shooting, fire trucks entered the square and hosed down all traces of blood.

Later, the bodies of the people killed that day were buried anonymously at various graveyards of the Novocherkassk area. There was never any official commemoration or acknowledgement of this horrible murder on the part of the Communist authorities. 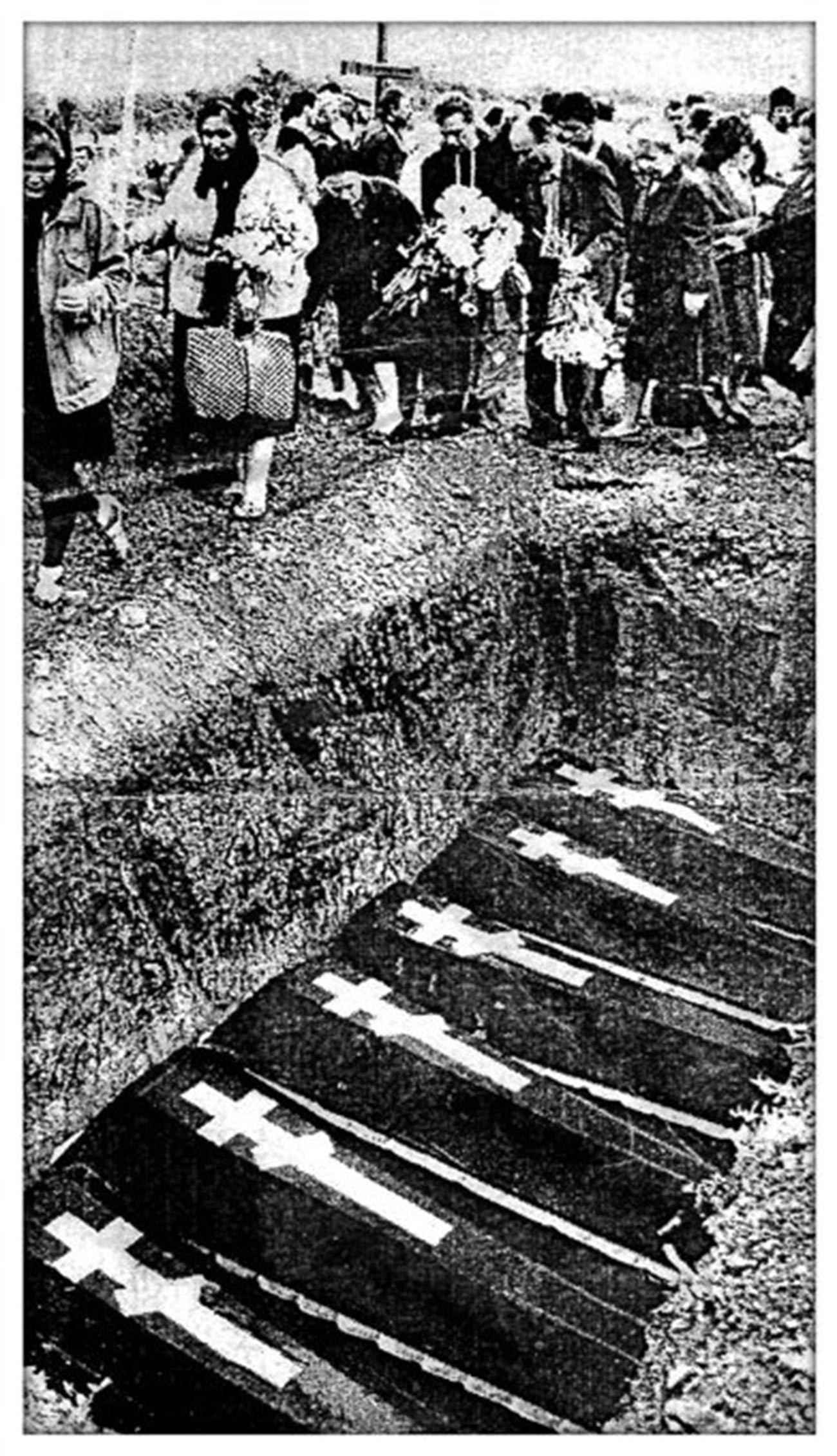 The symbolic reburial of the 1962 massacre's victims on a graveyard in Novocherkassk, 1994

On June 3rd, the riot stopped. Only some lonely protesters, drunk for the third day in a row, wandered the streets, while the militia and KGB arrested strike leaders. Frol Kozlov, the Party’s Secretary, addressed the people of Novocherkassk on the local radio station, trying to calm down the city and put the responsibility for the whole grim event on some ‘hooligans and instigators’. The authorities firmly denied any shooting, and talking about it could lead to being interrogated and jailed by the KGB. Between June 3rd-4th, more than 240 people were apprehended. 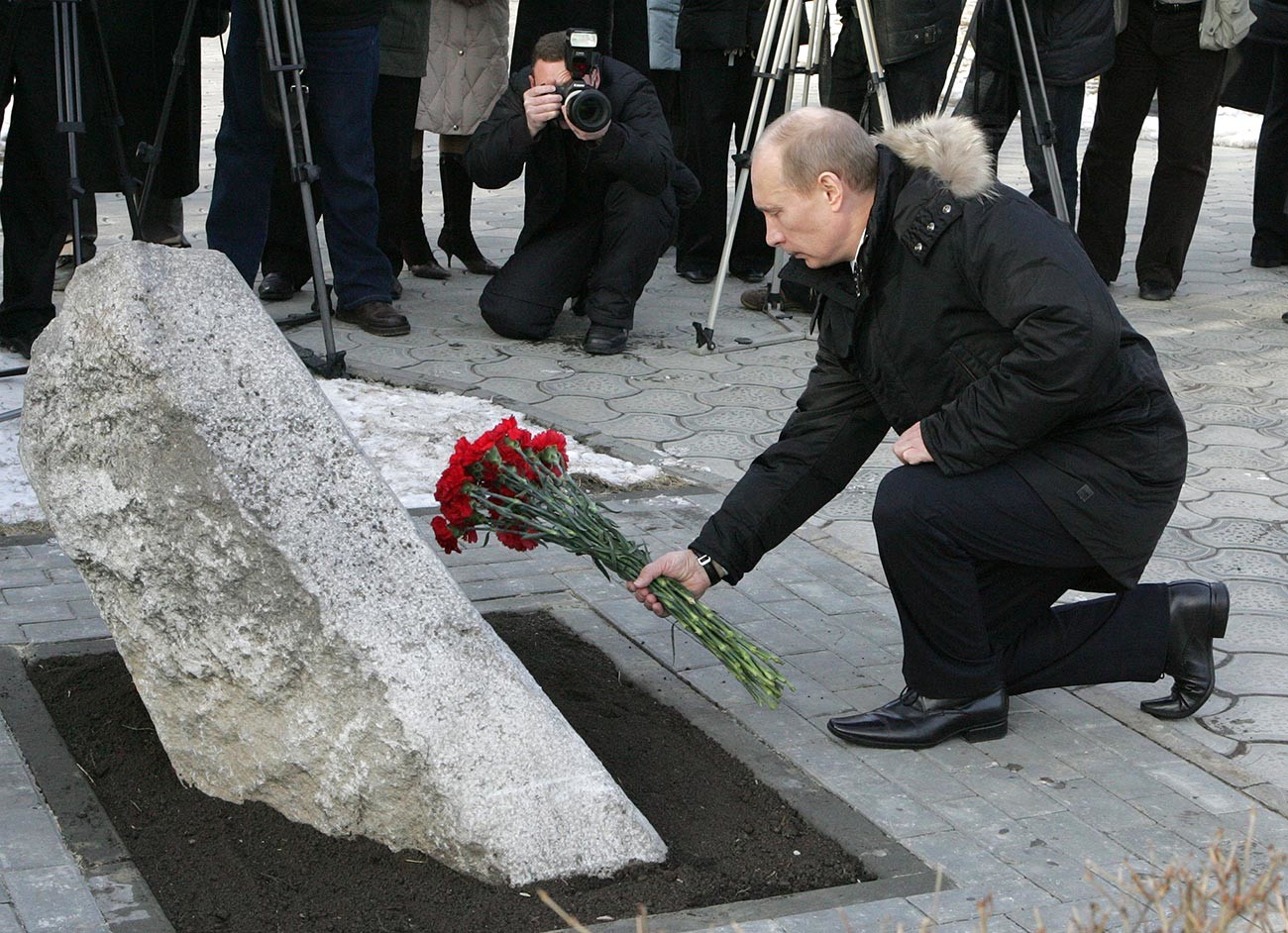 Vladimir Putin, President of the Russian Federation, commemorating the victims of the 1962 shooting in Novocherkassk

But the eventual trial wasn’t made public nationwide. It only happened in Novocherkassk in August 1962, and the sentences were extremely harsh. Many people who just happened to be there, 105 men in total, were sentenced to 10 to 15 years in hard labor camps. 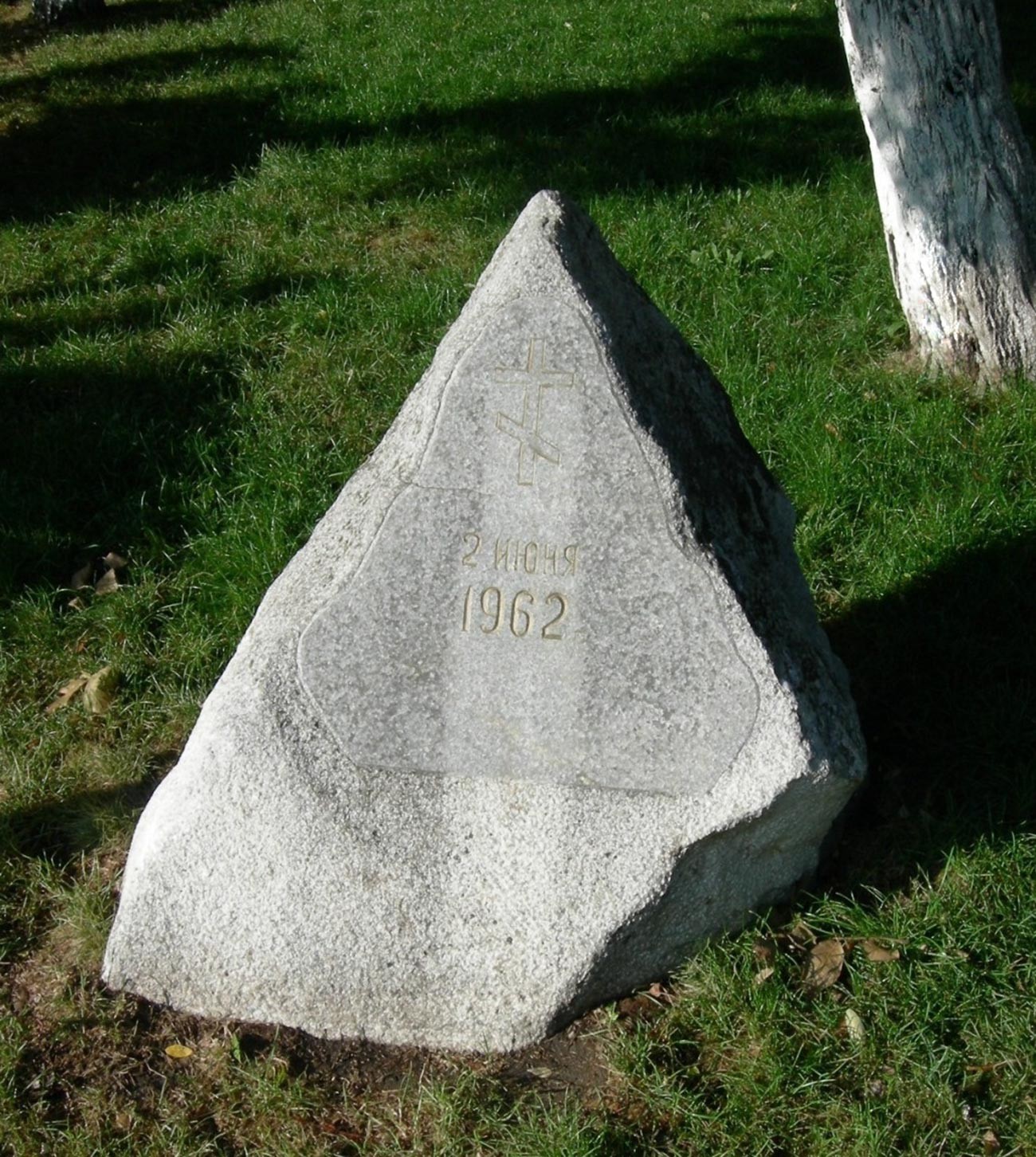 The "Stone On Blood", a Novocherkassk contemporary memorial to the 1962 massacre victims

Seven were condemned to execution by shooting. The events were made public only in the late 1980s. By then, it became apparent that most documents, photographs and audio recordings related to the shootings had disappeared or been destroyed. 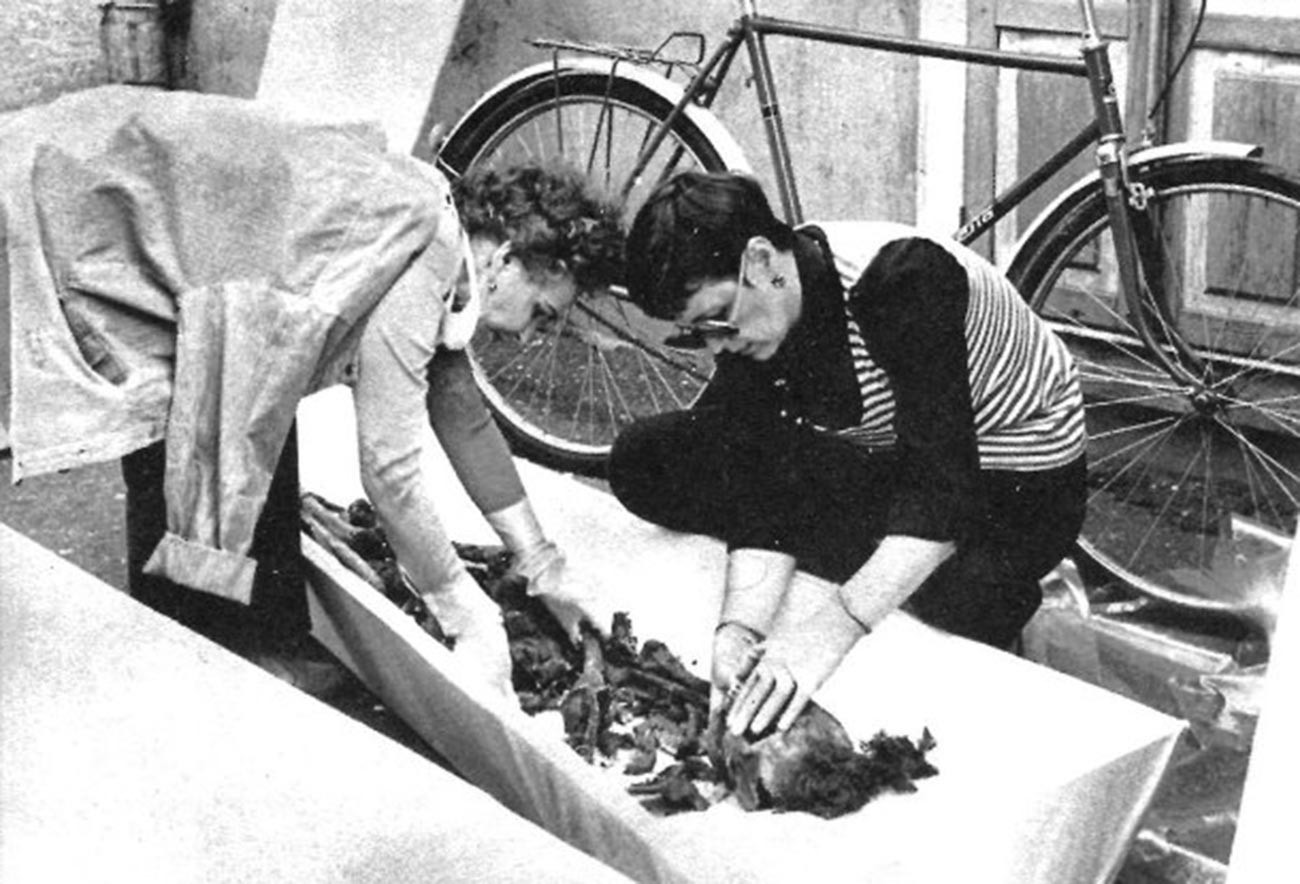 Only in the 1990s, were the burial sites of the people shot revealed, but the bodies of most of them are still missing. The USSR did everything to hide and bury the memory about one of the worst and most appalling deeds in its history.

Not a single person among the authorities responsible for the shootings has ever been condemned.