Why the Bolsheviks never renamed Moscow 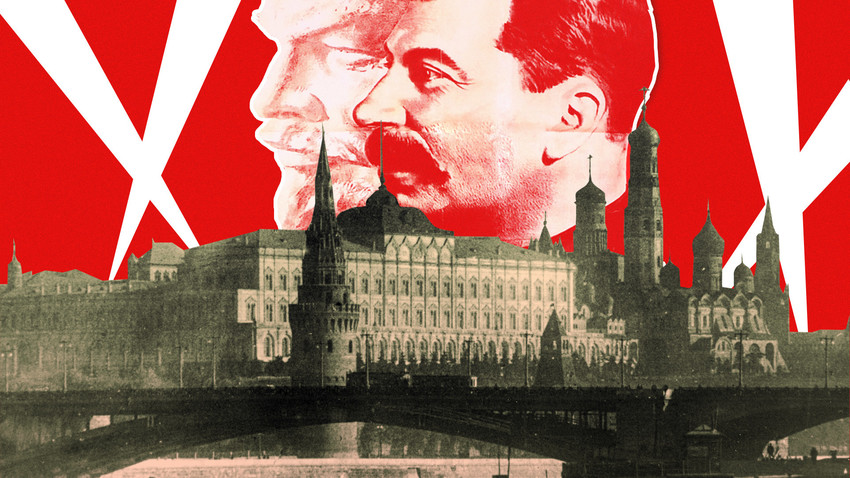 Getty Images, Russia Beyond
After Lenin died, St. Petersburg was renamed Leningrad. Soon, several other cities would also be renamed after famous Bolshevik leaders. But why and how did Moscow escape this fate?

It all began with the relocation of the capital. After the October Revolution, before St. Petersburg had become Leningrad, it lost its function as the capital of Russia.

You may remember that by the time the Bolsheviks had their second revolution in 1917, St. Petersburg also briefly carried the name Petrograd (1914-1924). Now, with that confusing detail out of the way, let’s look at why Petrograd gave up its status to Moscow in 1918. 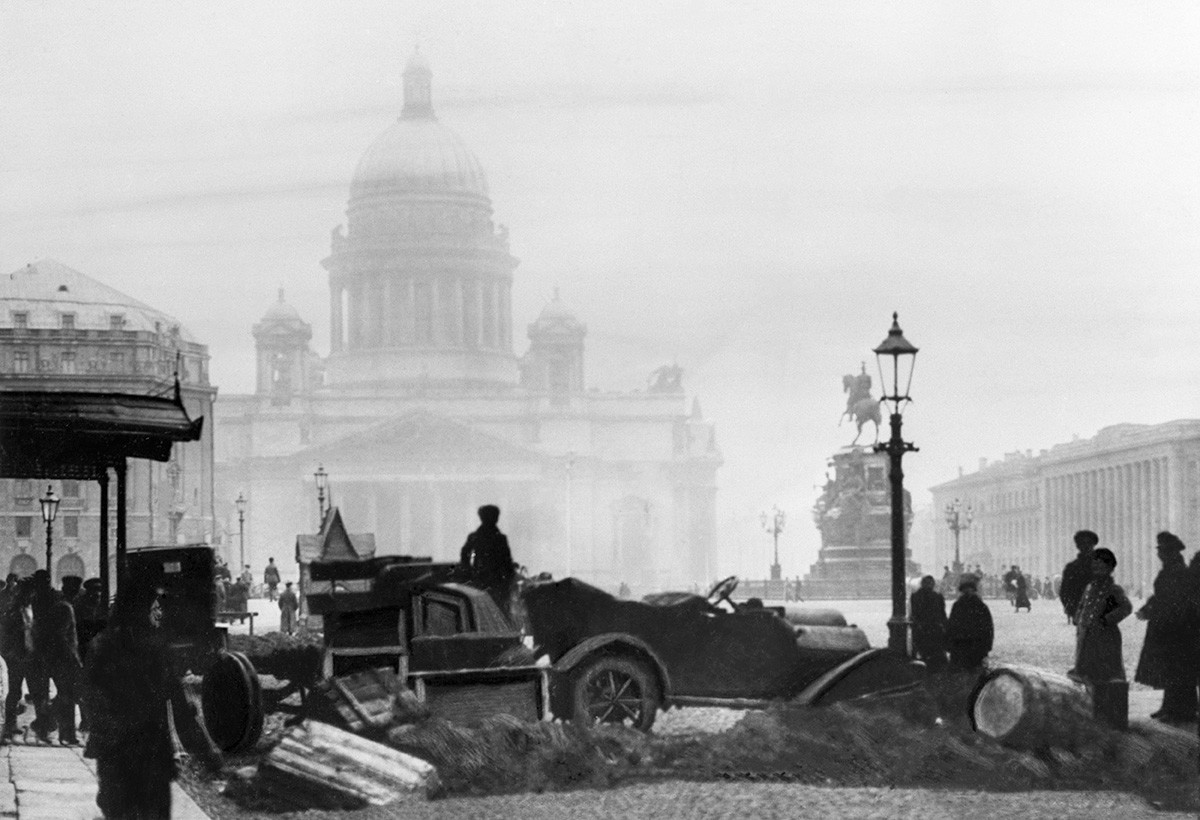 There were several reasons for the move. First, the former Tsarist civil servants boycotted the Bolshevik government. In the civil institutions in Petrograd – the State Bank, the Ministry of Foreign Affairs, the Central Telegraph, and others, the servants either didn’t show up to work, destroyed documents, or simply locked themselves in their offices. With the office workers preventing the institutions from functioning properly, the Bolsheviks had no choice but to set up new state offices in Moscow.

Secondly, there were a great number of anti-Bolshevik people and soldiers of the disbanded Russian Imperial Army in Petrograd. They organized provocations, attacked the Bolsheviks and their supporters, planned conspiracies, and organized terrorist attacks. Only by blocking the city and cutting off food supplies could the Bolsheviks make the monarchy’s supporters surrender. Apparently, the government couldn’t operate effectively under these conditions.

The third and probably most important factor was the First World War that was still underway in 1918. After Finland was declared independent on December 6, 1917, the state border lay only 35 kilometers from Petrograd. By the end of February, the German army was so close to the capital that, on March 2, it started bombing it with long-range artillery. On March 10, a secret train with Vladimir Lenin and other high-ranking Bolshevik leaders left Petrograd for Moscow. On March 12, the process of relocating the capital was completed, and on March 16th, it was formalized by the 4th Congress of Soviets.

But that still leaves us with the following question: why was Moscow never renamed? 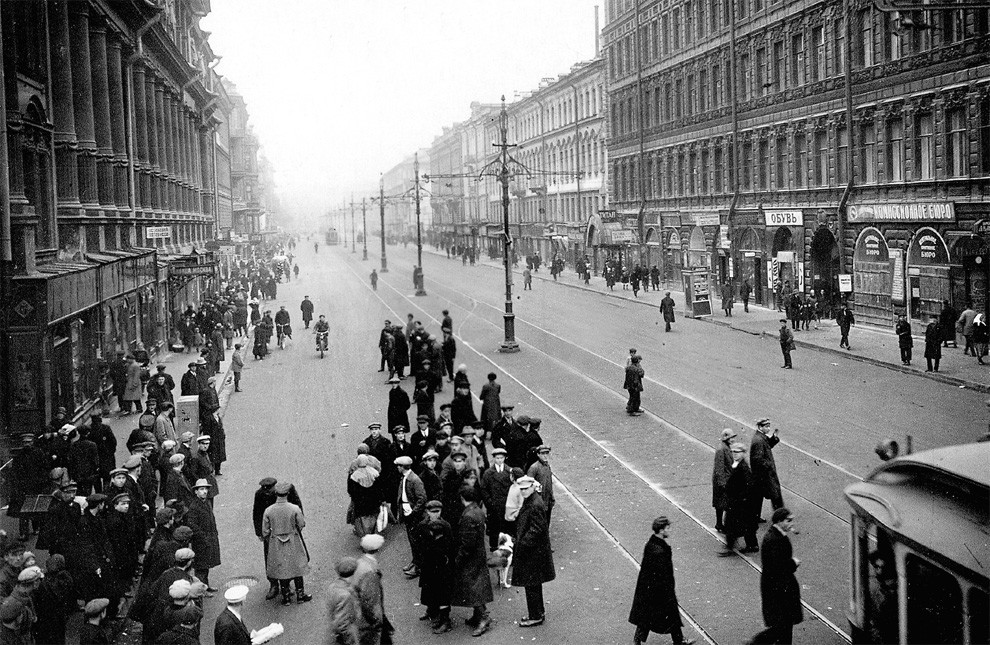 Petrograd in the 1920s. Nakhimsona prospect.

During his life, Lenin was firmly against the renaming of any cities, towns, streets, etc. after him. After his death, his widow Nadezhda Krupskaya repeated on numerous occasions that Lenin would have found the idea distasteful, but her voice was left unheard. On January 26th, 1924, just five days after Lenin’s death, the Second Congress of Soviets of the USSR renamed Petrograd into Leningrad, citing as their reason that “the revolutionary activities of Vladimir Lenin first blossomed in Petrograd.”

The ‘renaming fever’ was put in effect by Joseph Stalin, who didn’t leave himself out of the history books either: the town of Donetsk, in the currently disputed Donetsk region of Ukraine – formerly Yuzovka, was renamed Stalino in 1924. A year later, in 1925, Tsaritsyn (modern Volgograd) was renamed Stalingrad. While Dushanbe (the capital of the Republic of Tadzhikistan) had become Stalinabad in 1929, and Novokuznetsk, in Siberia, had started to go by Stalinsk in 1932. The list goes on...

Russia’s other largest and most important cities had also received names of prominent Bolshevik leaders. In 1924, Yekaterinburg had become Sverdlovsk, after Yakov Sverdlov (1885-1919). In 1931, the ancient town of Tver was renamed Kalinin, after Mikhail Kalinin (1875-1946), in 1932 Nizhny Novgorod was renamed Gorky, after the famous socialist-realist writer Maxim Gorky (1868-1936), who was born there – although Maxim Gorky himself fiercely opposed the decision, and banned the city’s new name from being used among his family and friends. In 1935, Samara had become Kuibyshev, after Valerian Kuibyshev (1888-1935), and Stavropol had switched to Voroshilovsk, after the military commander Kliment Voroshilov (1888-1969). Again, the list could go on...

By implementing his campaign of renaming, Stalin sought to delete the toponymy of the Russian Empire, substituting it with a Soviet one, and thus creating a new, Soviet reality. All of these renames were made to look like the will of the people, with the government kindly obliging to rename the cities to honor the generous and heroic Leader. However, Stalin firmly and repeatedly opposed any attempt to rename Moscow. 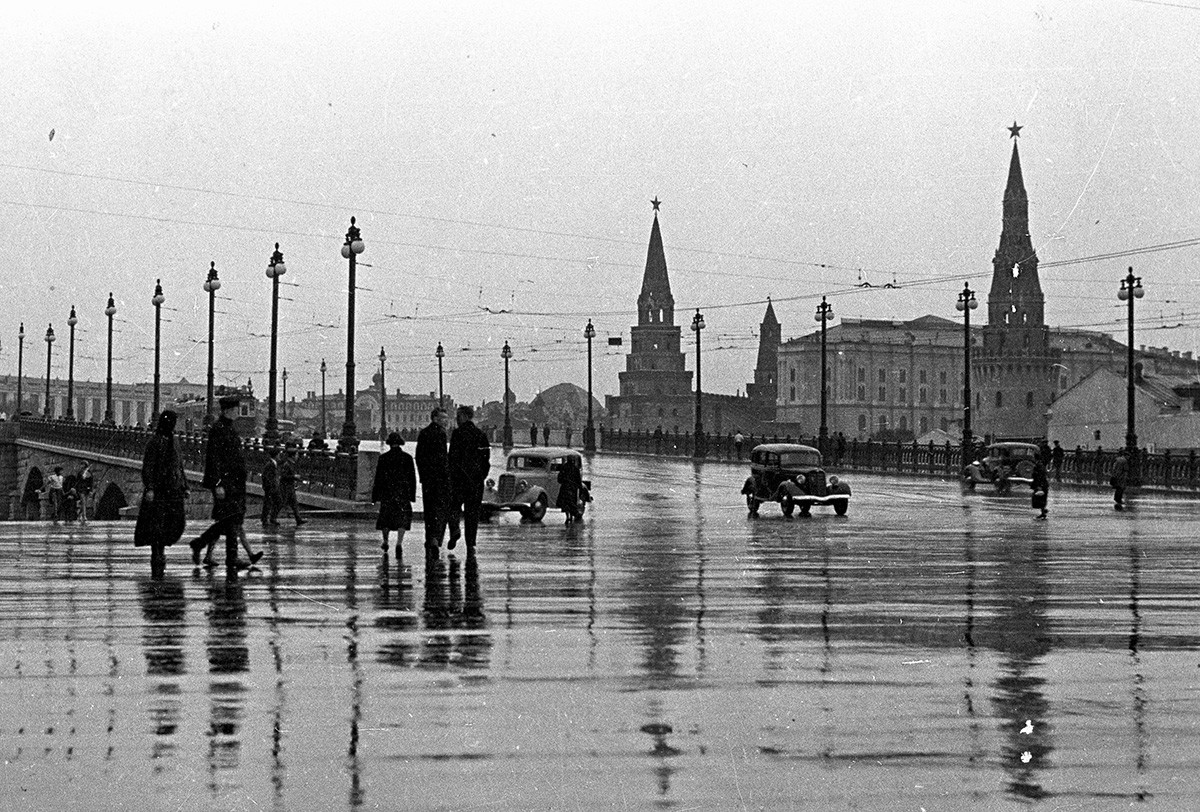 A view of the Kremlin from Bolshoi Kamenny Bridge. Moscow, 1937.

The first time the idea was floated, in 1927, about 200 Bolshevik civil servants filed a plea to rename Moscow to Ilyich (the patronymic of Vladimir Lenin), writing that “Lenin founded the free Russia.” Stalin refused the proposal on the grounds that having two large cities renamed after Lenin would have been too much (with Petrograd having then just become Leningrad).

The second attempt came in 1938 and was put forth by Nikolay Ezhov (1895-1940), then the People’s Commissar for Internal Affairs – also a ruthless henchman and executioner, who was starting to lose his power and trust in Stalin’s eyes. In an attempt to win back the leader’s favor, Ezhov commanded his subjects to create a project of renaming Moscow to Stalinodar (translated as “Stalin’s gift”). Ezhov’s project even cited letters and poems from “simple Muscovites”. But Ezhov didn’t take into account that Stalin hated plain flattery. He dismissed the suggestion as “foolish.” Ezhov didn’t survive long after that, having been executed two years later.

There are accounts that Moscow was subject to another renaming campaign after WWII, (but Stalin refused the suggestion again); and another, after Stalin’s death, when some of his former aides and henchmen tried to rename the capital in his honor posthumously. However, this last attempt was made futile by the policy of de-Stalinization.

One may find it strange that the totalitarian leader, who had numerous cities and towns renamed after him and had gigantic monuments to him installed in various parts of the country, didn’t want the capital to be renamed after him and firmly opposed attempts to do so. However, it was not the only time he showed a lack of vanity: we know that Stalin deleted his image from the drafts to the Order of Victory and dismissed the idea of renaming the Moscow State University after him as well.