Did Stalin speak Russian with a thick Georgian accent? 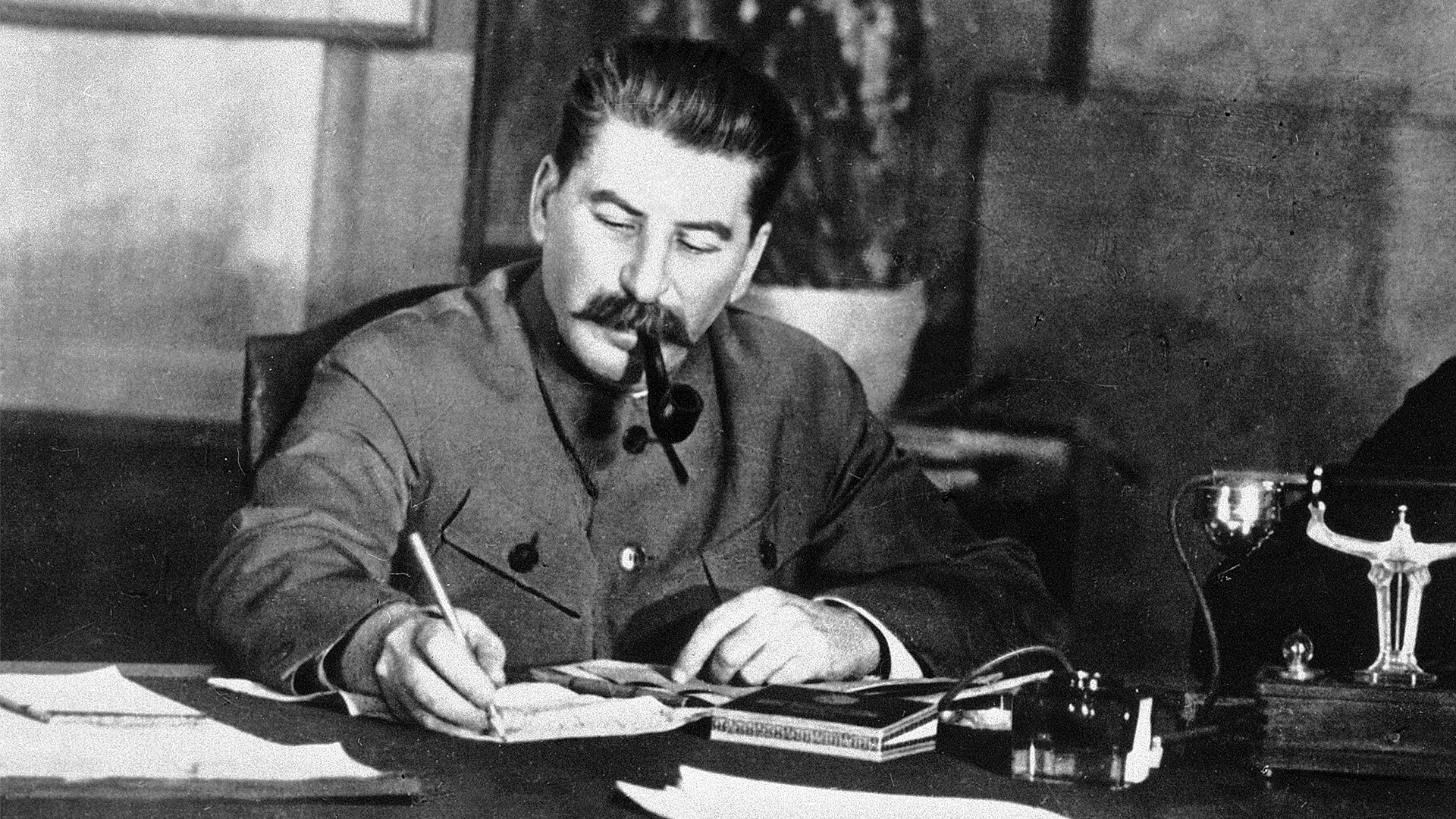 Sputnik
In popular perception the Soviet dictator spoke Russian with a strong Georgian accent - this is how he was often portrayed in films, and the accent can be heard in numerous recordings of his speeches. In real life, however, he spoke differently.

Most Russians living today never saw Stalin in real life; nor have they seen video recordings of his speeches. So, when such recordings appear on YouTube many users write comments that they are "hearing his voice for the first time," and are amazed at his behaviour when they see him laughing or joking and ordinary people applauding and glowing with happiness just because they met him. This is not surprising: Footage of this other Stalin, charismatic and "positive", was kept hidden in the archives for many years. 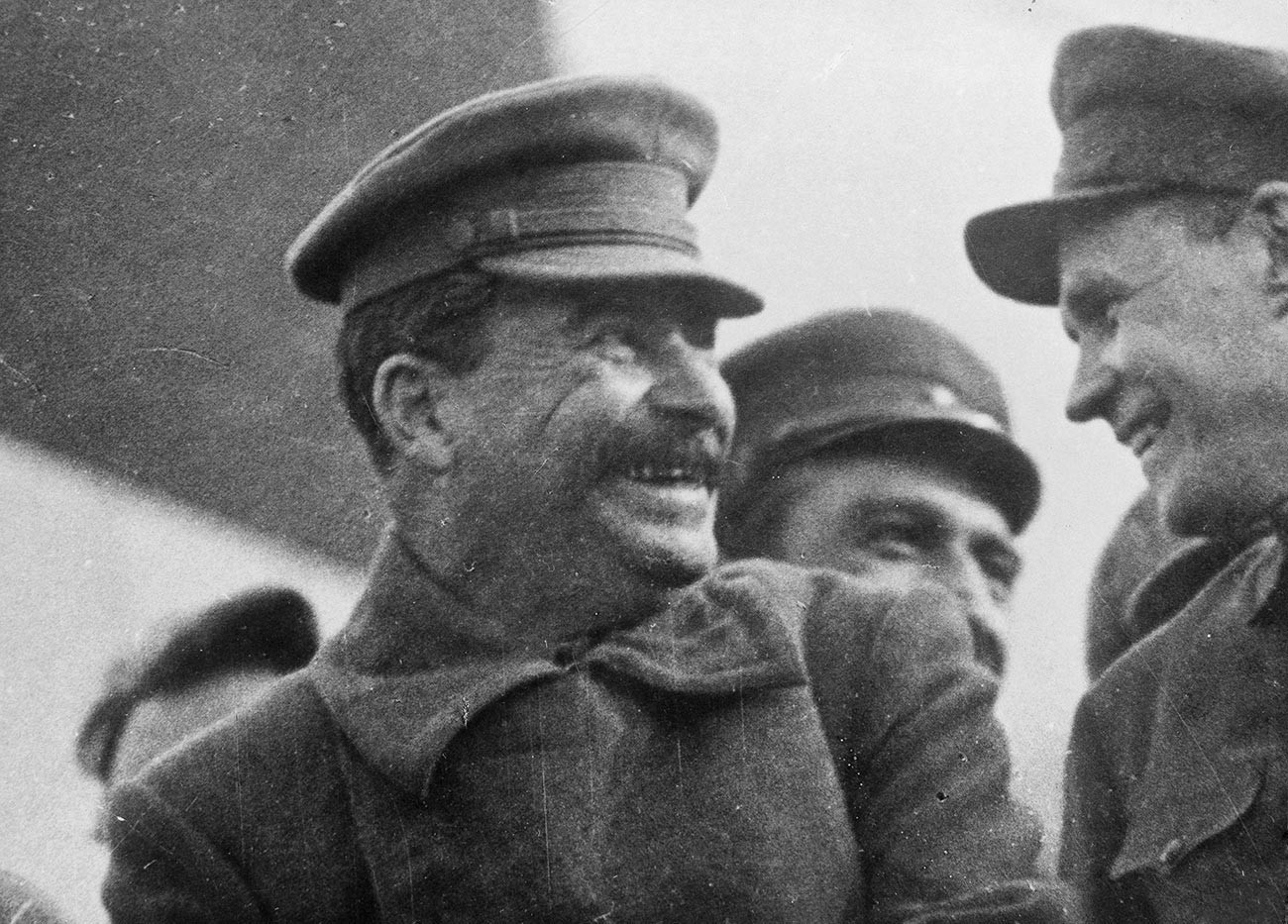 At the pivotal 20th Party Congress in 1956, the new general secretary, Nikita Khrushchev, delivered a report about Stalin's crimes and set a course for dismantling his personality cult. Stalin's body was removed from the Mausoleum and buried in the Kremlin Wall; monuments to him were demolished throughout the country and he was no longer shown on television. Khrushchev also said that cinema had played a significant role in creating the Stalin personality cult, and for the next few years, by government decree, no propaganda films of Stalin made during his rule were shown, and no new films were made.

Today, Russians are accustomed to perceiving Stalin in the manner in which he is depicted in many late Soviet-era and contemporary films, as well as in comedy sketches where the "great leader of the peoples" is portrayed in an exaggerated way with his various indispensable attributes - in a military uniform and cap, with a pipe and speaking with a strong Georgian accent. As if the latter makes him sound more sinister.

To what extent, however, does this image correspond to reality? And how strong was his accent? Those who heard the Soviet leader speaking in the flesh were surprised that they couldn't recognize his voice in recordings. The former archive of the Politburo of the Central Committee of the CPSU [Communist Party of the Soviet Union] has preserved the diary of Stalin's relative, Maria Svanidze. (Her husband was the brother of Stalin's first wife, and the two families were close). Usually, Maria listened to Stalin speaking in the flesh but once, in 1936, she heard him on the radio and was very surprised. "How strange, I couldn't recognize his voice - through the microphone the tone quality of his voice was different and, most importantly, the accent was 100 percent stronger than in real life. He speaks Russian with a very pure accent and he has a good command of the idiomatic Russian language…"

Stalin - his real surname was Dzhugashvili - was born in 1878 in the small town of Gori not far from the city of Tiflis in the Russian Empire (today's Tbilisi, capital of modern Georgia). He didn't speak Russian before the age of eight, but his mother, who wanted to send him to the Tiflis Orthodox Theological Seminary, asked the children of a local priest to teach Russian to Joseph. As a result, he learned the language in just two years and was admitted directly into the second year of studies at the seminary. 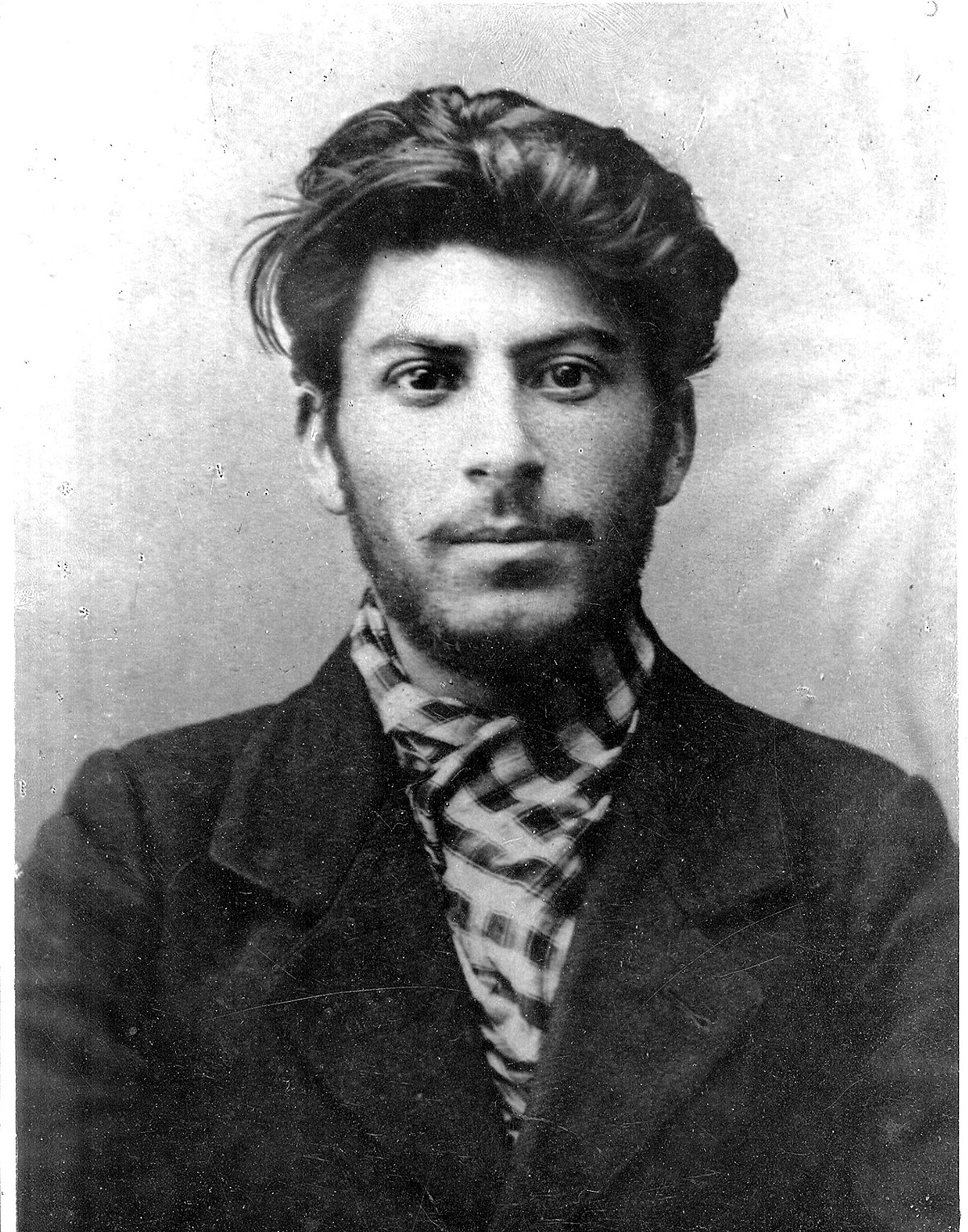 At this time, there were many revolutionaries in Tiflis, exiled there from Moscow and St. Petersburg. Joseph maintained close contact with them and developed an interest in Marxism, and was later involved in political activism across the Russian Empire. It goes without saying that he predominantly spoke Russian and he assumed the pseudonym of Stalin, a clearly Russian name. Later, Vladimir Lenin appointed him to an important position in the party structure.

In her memoirs, Twenty Letters to a Friend, Stalin's daughter, Svetlana Alliluyeva, says that before the age of six she didn't even know that her father was Georgian. The family spoke Russian at home and it was her elder brother who told her that "father used to be a Georgian". She didn't even know what that meant exactly. According to her, "Georgian culture was not cultivated at home - father was completely Russified". Also, the nationality question was of little interest to people and Stalin was even irritated by reminders of his roots. "My father got really angry when comrades from Georgia came and, as is customary - it's something Georgians can't do without! - brought generous gifts with them: Wine, grapes, fruit."

Problems with his voice or with the recordings?

At the same time, Svetlana recalls that Stalin liked Georgian songs - as well as Russian and Ukrainian ones for that matter - and enjoyed singing them with friends. "He had an excellent ear for music and a high, clear voice; by contrast, he spoke in a muffled, low and hushed voice for some reason."

Caretakers at Stalin's dacha in Sochi also recalled his muffled voice. His office had special acoustics installed so that those present could hear the supreme leader clearly, because he muttered under his breath.

At the same time, Maria Svanidze spoke about the very poor recording quality, which made it appear that Stalin was speaking in a noisy room, and it was very difficult to figure out what he was saying. Maria even suspected "sabotage on the part of the signal operators".

It seems that the Soviet leader's indistinct voice with its slight accent - something that is often simply impossible to get rid of entirely - was only made worse by old microphones and recording equipment.

There are also differences between speeches and the contexts in which they were made. Here is a rather spontaneous and jocular speech by the leader at the opening of the Moscow Metro. The accent is almost imperceptible, discernible only in individual words and sound combinations.

There is also a recording of Stalin's radio address to the nation in 1941, at the very beginning of the war. He utilizes pauses and is clearly controlling his voice. No accent is detectable.

Here is another recording from 1941, a more spontaneous speech by Stalin addressing Red Army soldiers. He only occasionally looks at the text, but otherwise his remarks are unscripted. Here the accent is more noticeable, probably because he is nervous.

And here is one of Stalin's last speeches, addressed to the Party in 1952. He speaks very clearly, leaving pauses. Practically no accent is discernible. The tone quality of the voice and the accent are very different from the 1941 speech - experts believe it is highly unlikely that his voice could have changed so much because of age, so the transformation is counted as a historical mystery.

So did he have an accent in real life?

In his memoirs, Marshal Zhukov wrote that Stalin spoke quietly, separating one phrase from another in a precise manner. "He spoke with a noticeable Georgian accent, but he knew the Russian language perfectly well and liked to use vivid literary comparisons, examples and metaphors."

Stalin's translator, Valentin Berezhkov, noted that Stalin had a Georgian accent and, what is more, he was capable of "playing" upon it. He recalled that during talks with Churchill about the opening of a second front there was a tense moment, and Stalin, "slowly articulating his words and possibly even with a deliberately emphatic Georgian accent", pronounced a fairly strongly-worded speech to the effect that the British should not be "afraid" of the Germans.

Vladimir Yerofeyev, who was Stalin's translator later on, narrated another interesting detail in an interview. "Molotov warned that on no account should Stalin be asked to repeat something. If you didn't hear the first time round, then find some way out of the situation. Otherwise Stalin gets offended at the idea that someone could have found his accent incomprehensible."

It is interesting that Stalin's attitude to his own accent also seemed to change. A large number of pseudo-historical propaganda movies in which Stalin was portrayed as a hero were released by Soviet filmmakers. With Stalin's approval, the role was for many years played by Georgian actor Mikheil Gelovani, who never talked to Stalin personally and trained for his roles by listening to the leader's radio broadcasts, and tried to imitate the particularities of his speech and accent. In 1949, the film, The Battle of Stalingrad, was under discussion and Stalin decided that the Georgian actor was not suitable for the role of Soviet leader and conqueror. He told Cinema Industry Minister Ivan Bolshakov: "Gelovani has a strong Georgian accent. Do I really have such an accent? Think of a suitable actor for the role of Comrade Stalin. Best of all, someone Russian." So, the actor Aleksei Dikiy was chosen for the part.

Many people hold the view that after the victory against Hitler, Stalin definitively considered himself to be a Russian supremo and no longer wanted to be identified with provincial Georgia.

Some researchers suspect that the differences in people's perceptions can easily be explained by the fact that Stalin had a number of doubles. Some had a stronger accent and others had none at all.

There is another popular theory - that Stalin was not Georgian. His family is said to have Ossetian not Georgian roots. The theory that Stalin's father was not Vissarion Dzhugashvili, but the traveller Nikolay Przhevalsky, who is believed to have paid a brief visit to Gori, sounds even more outlandish. 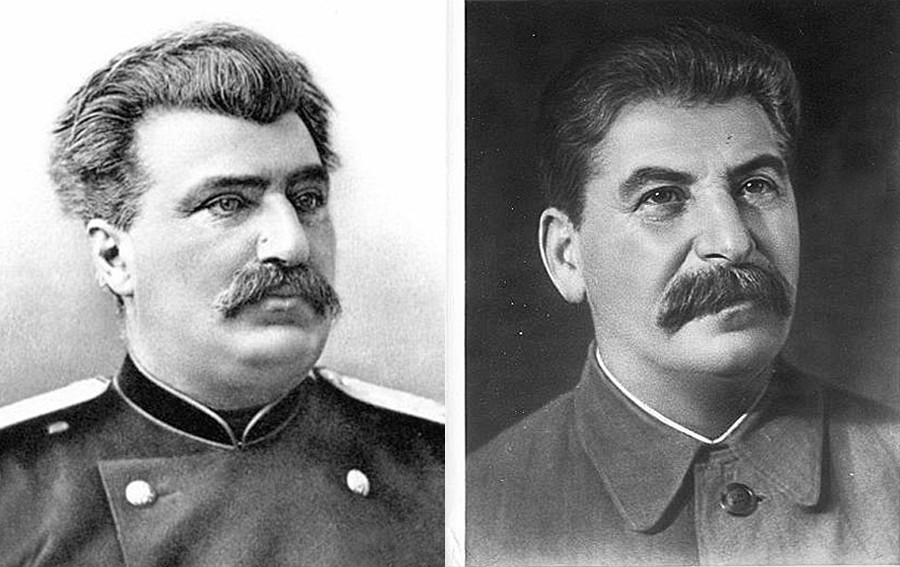 It is not clear, however, how a biological father can have anything to do with a person's accent. The fact is that Stalin spoke Georgian until the age of eight. Moreover, Stalin frequently spoke Georgian with his close associate Lavrentiy Beria, who had the stronger accent.

Finally, there is the theory that radio broadcasts were not made by Stalin but by someone else, and that another person's voice could have been dubbed into the video.  Indeed, we are hardly likely ever to know the truth. All we can do is watch the footage and wonder how Stalin could simultaneously be a cruel tyrant and so captivate the masses.