5 pieces of furniture EVERY Soviet home had (PHOTOS) 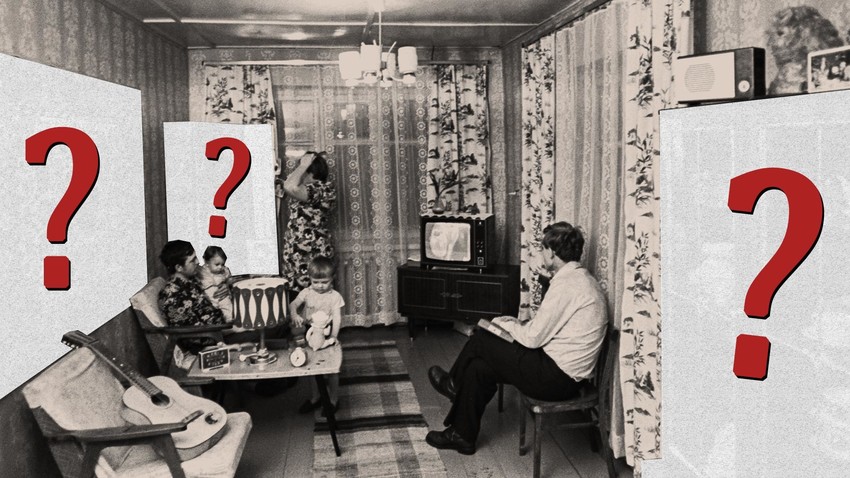 Anatoly Semyokhin/TASS
Every piece of old furniture has a story attached to it. We looked back over several decades and selected the most essential pieces of furniture nearly every Soviet household had. 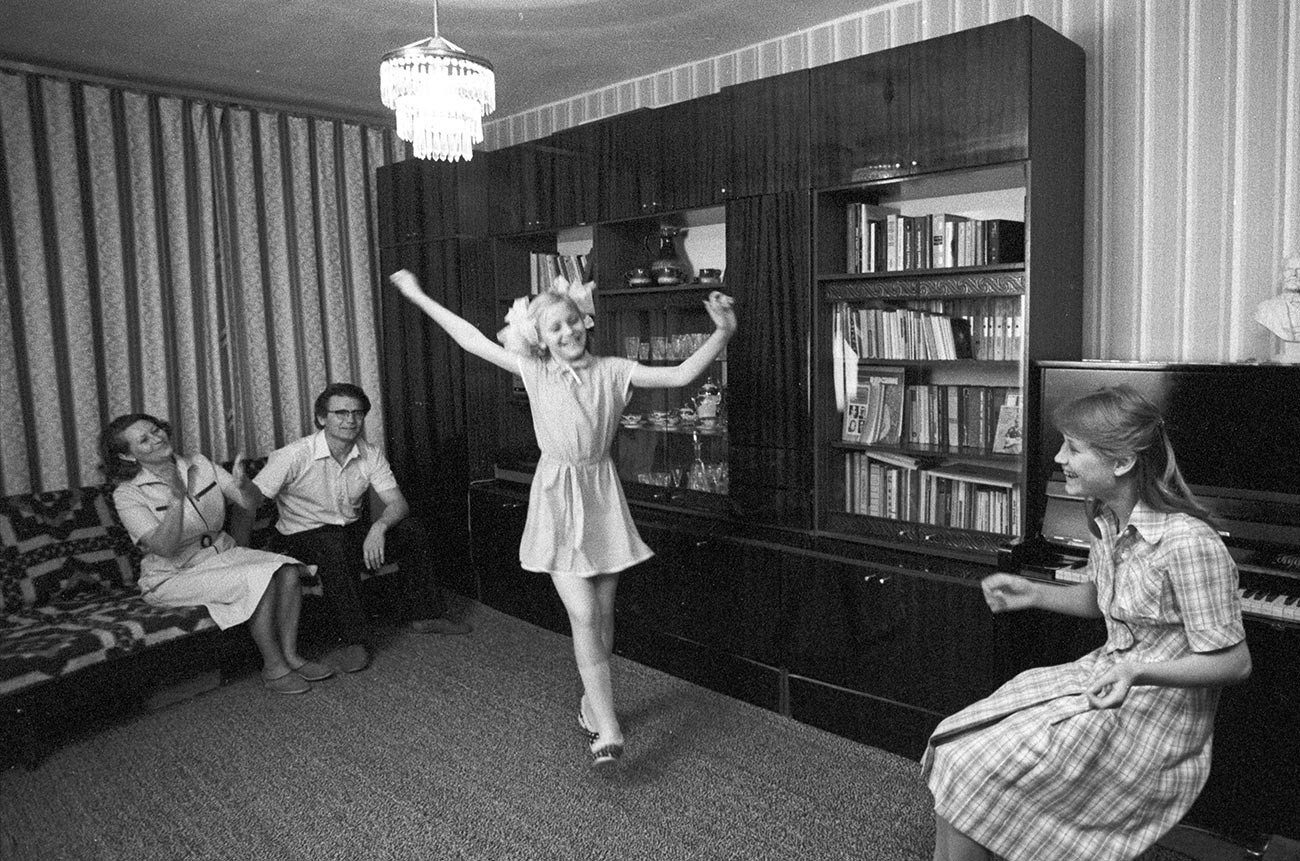 Iconic Romania or Yugoslavia-made furniture sets proved to be the major storage solutions throughout the 1970s-1980s, the be-all and end-all of a typical Soviet living room. It was a period for teak, walnut or mahogany wood, dull autumn colors and glitzy lacquer in the furniture realm.

Let’s face it: popular back in the day, those solemn wooden cabinets, commonly referred to as a stenka (“furniture wall”), were designed to be functional above all other “nonessential” qualities. To serve that central purpose, they boasted panels to hide clothes, compartments with spacious drawers and cabinets to store tons of books, bottles of alcohol, sparkling Czech glassware, porcelain tea sets, trademark blue-and-white Gzhel figurines, plastic toys, endless gifts from relatives, childhood photographs, as well as piles and piles of personal memorabilia.

Given that the wooden cabinets were meant to contain a person’s whole life, people had to wait for months to buy their three or five-piece sets. Such furniture actually cost an arm and a leg. Individuals lucky enough to earn 90 rubles a month would line up to purchase their storage system, which actually tended to take up a lot of room space.

The coveted stenka was mostly made in East Germany or neighboring Poland and could cost about two times what a family earned in a year (which was more than 2,000 rubles). 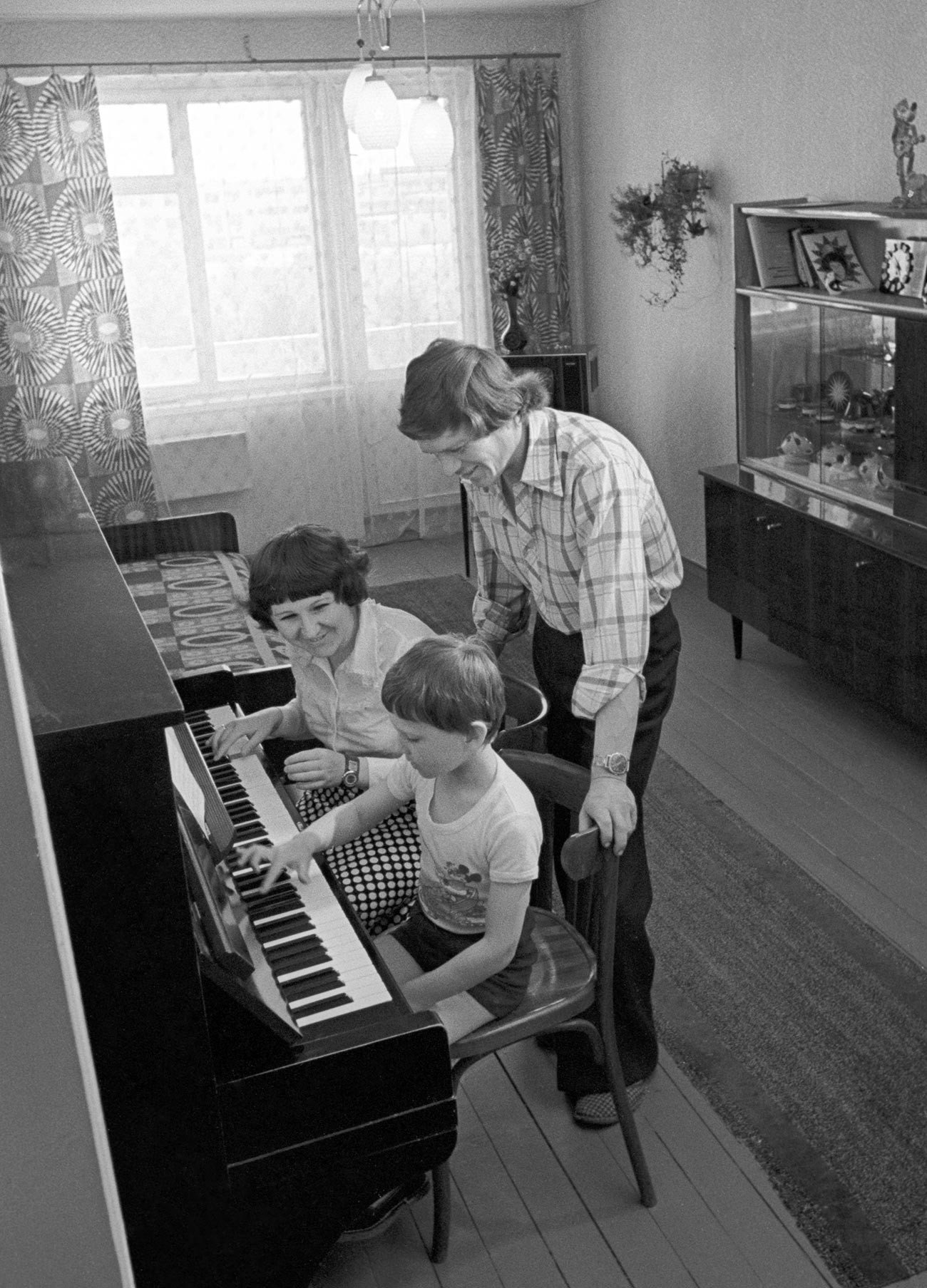 Varnished furniture had a common place in Soviet households, in addition to the floor lamp and a piano in the living room.

Music was a vital aspect of the Soviet public school education. Many parents of young children would go to any ends to buy them a piano and arrange for lessons, even more so if their kids had no musical talent whatsoever.

A music school diploma was an absolute must, therefore a Soviet piano, such as a Lira, Krasny Oktyabr or Zarya, had to be acquired by all means. For instance, Soviet-made Lastochka pianos cost an ordinary citizen some 526 rubles and were of mediocre quality, while the famous Petrof instruments from the revered Czech manufacturer could cost up to a whopping 1,400 rubles. In the end, it was strictly a matter of money. 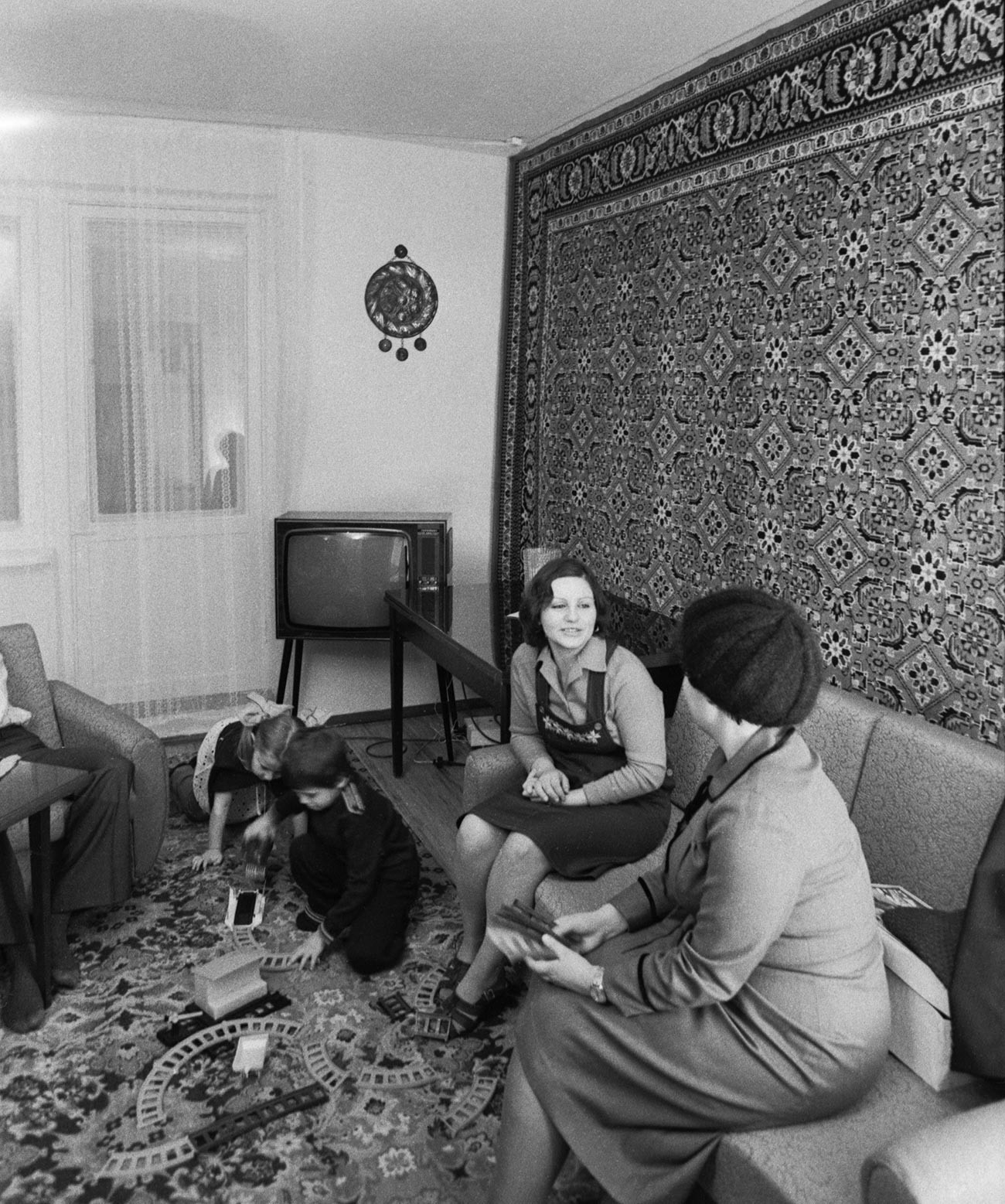 Laugh or cry as you like, but a typical Soviet living room also had huge carpets hanging on the walls, cementing the 1980s in the minds of several generations of children as the decade of bad taste.

In their heyday, these usually thick and colorful carpets pinned to the walls were truly the epitome of luxury and prosperity, making them a chunky statement in millions of family rooms across the Soviet Union.

The carpets usually came with an average price tag of 200 rubles. Former Soviet Republics of Azerbaijan, Turkmenistan and Kyrgyzstan were the leaders in the production of this now outdated “luxury” item. Some exotic carpets covering the entire walls could even cost as much as 800 rubles.

Those who couldn’t “keep up with the Joneses” for financial reasons opted for wall tapestry with some animal-print, preferably featuring swans or deer. They were also often cheaper. And these tapestries and carpets would make cold apartment walls feel warm and soft. For this reason, they were often hung over beds.

Among the most sought-after designs was a wall tapestry featuring a reproduction of the famous painting by Ivan Shishkin and Konstantin Savitsky titled ‘Morning in a Pine Wood’.

Both carpets and ‘Gobelin’ tapestry were objects of sentimental value passed down through several generations, until finally dumped unceremoniously in the trash by great-grandchildren. 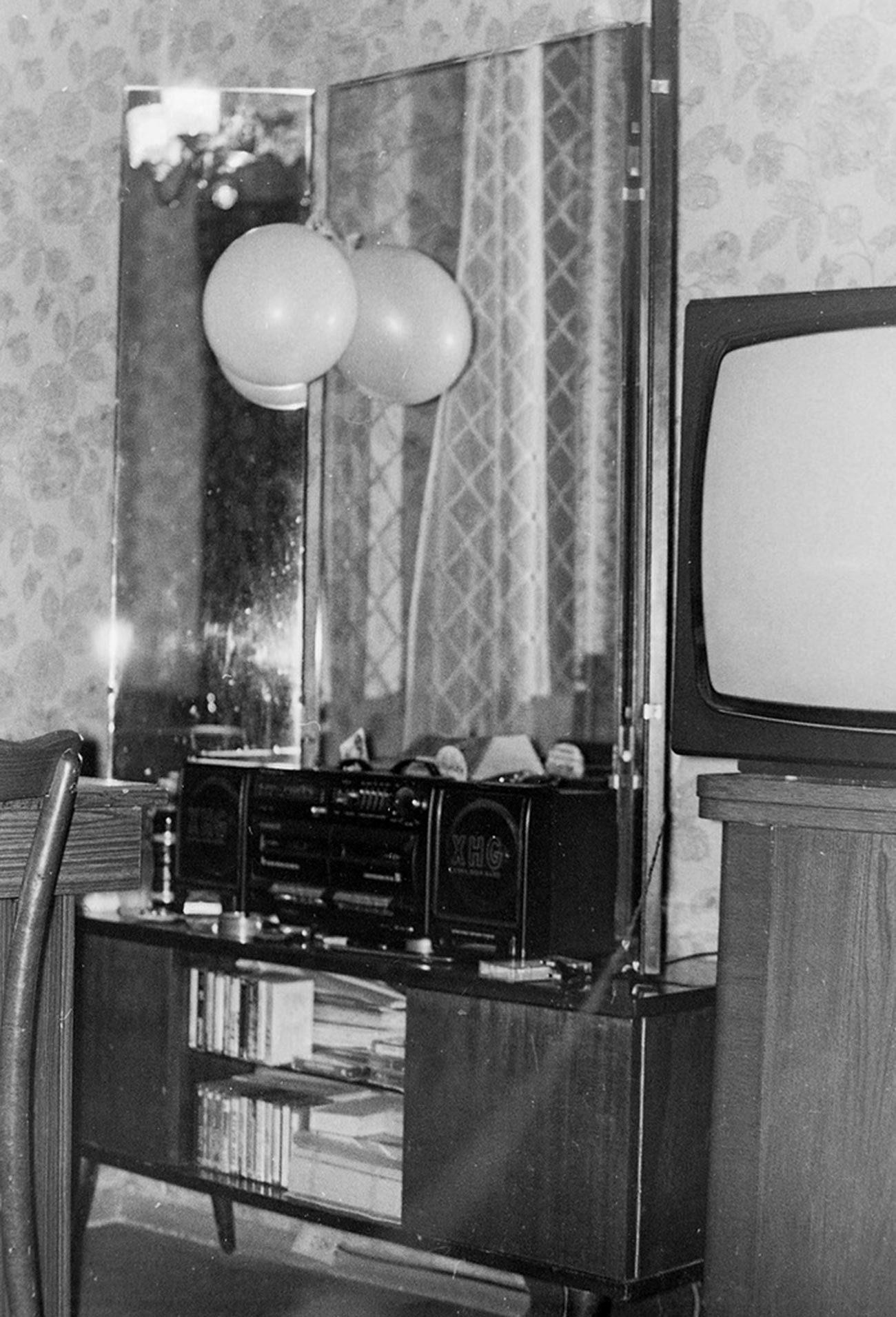 Some Soviet women were very serious about their makeup and wanted to see their reflection from all possible angles. A three-winged wood framed mirror gave them the scope they were looking for. It wasn’t cheap though, available for around 100 rubles, which was roughly equal to the average monthly salary.

Traditional-style trifold dressing tables with a chest of drawers probably looked great in your grandma’s bedroom, recreating the classic women’s boudoirs of the 18th Century. Featuring a 180-degree rotatable mirror, in Soviet reality it was much more than just a piece of reflecting glass.

The dresser served as a multi-purpose desk, storing just about anything, from nail polish and aspirin to kids’ school books and sewing magazines with patterns. But many were so poorly designed that it was impossible to pull up a chair and sit comfortably at the desk, as the stand happened to be too low and you couldn’t get your legs under it. 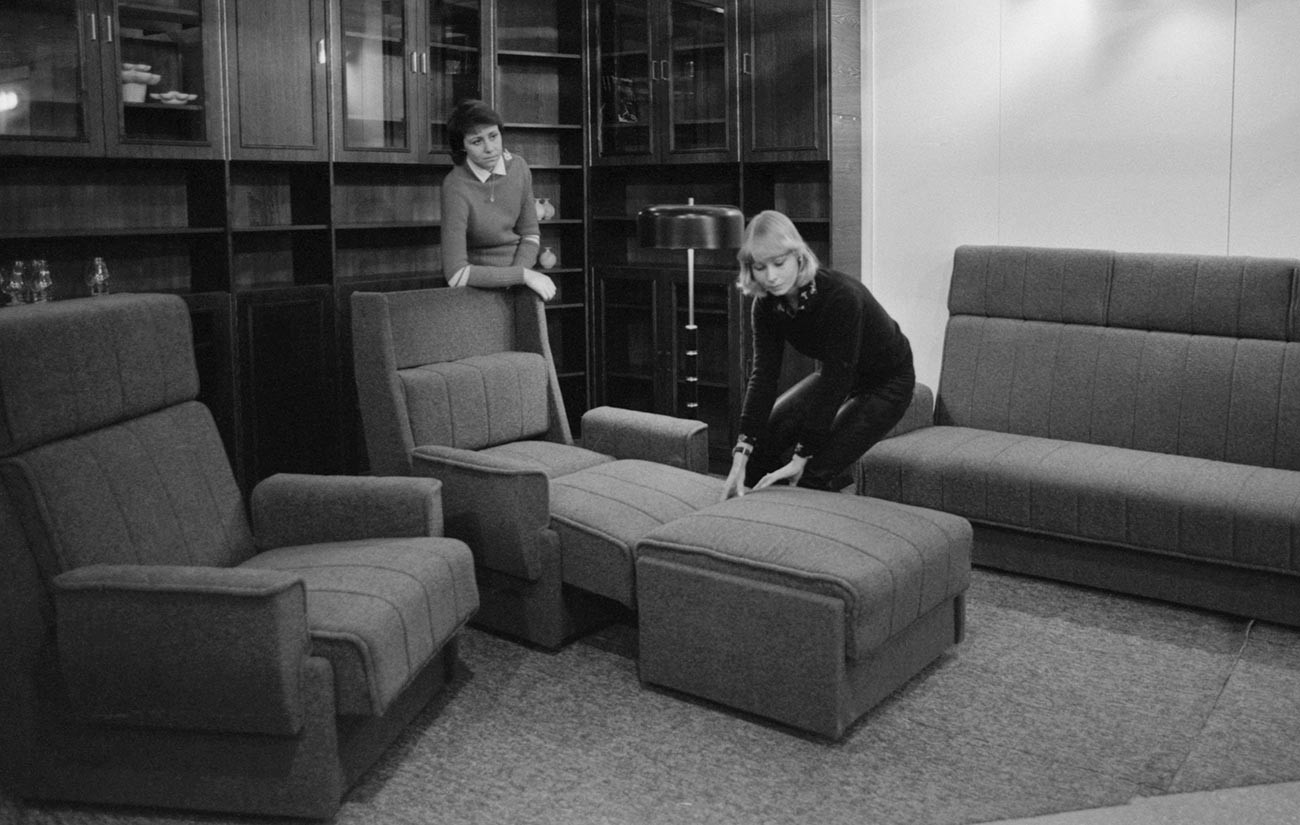 In the realm of furniture design, the legacy of the 1970s lies, among other things, in its innovation in arm chairs. A chair that turns into bed proved to be a great solution for a small Soviet apartment where a proper sleeper couch just didn’t fit in.

The pull-out sleeper chair with fabric or leather upholstery was not only a great space saver, it also killed two birds with one stone by becoming a comfy seat for a family member and a decent bed for guests. Its design proved to be timeless. The chair also “only” cost around 50 rubles and was more or less affordable. When the pull-out sleeper chair was not being used as a bed, it served as a regular armchair.

And yet, those who couldn’t afford one were forced to buy cheap, but practical fold-up cots that rested on metal legs. They were an essential addition to the typical Soviet family. Uncomfortable but durable, they cost around 15 rubles and were widely used in kindergartens, summer camps and even home kitchens, becoming some of the most important fixtures in Soviet apartments.