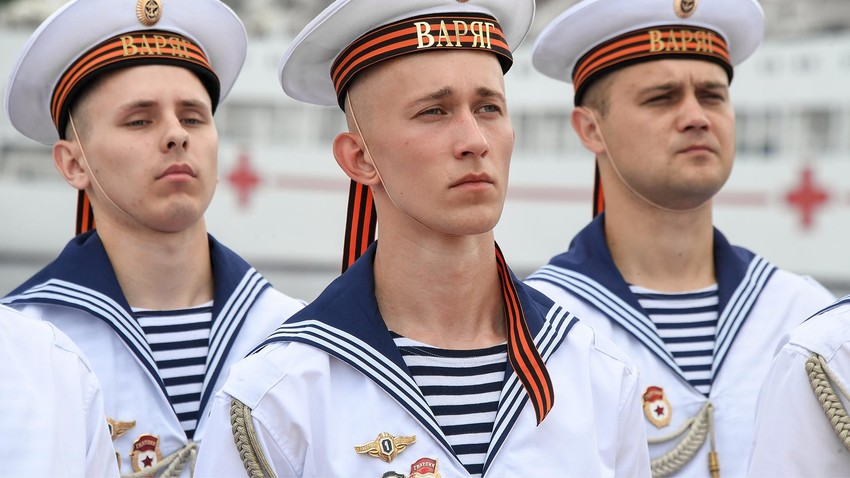 Vitaliy An'kov/Sputnik
This striped cotton undershirt became the trademark of the Russian sailors, Airborne Corps, and even an art movement. Why is it so important?

“Tel’nyashka is just a garment. But try to put it on at least once – you will immediately want to straighten your shoulders. Blue stripes on your chest, the color of an ocean wave. Between them, the white horses of foaming choppy crests... The sea on your chest!”

These are the words of Vasiliy Zaytsev, the famous Soviet sniper and hero of the Battle of Stalingrad. Before WWII, he served in the Soviet Navy but later volunteered to be transferred to the front lines. Zaytsev became a sniper but kept his sailor’s tel’nyashka as a symbol of a sailor’s pride and relentlessness in the battle. Why was tel’nyashka so important for Russian sailors and soldiers? 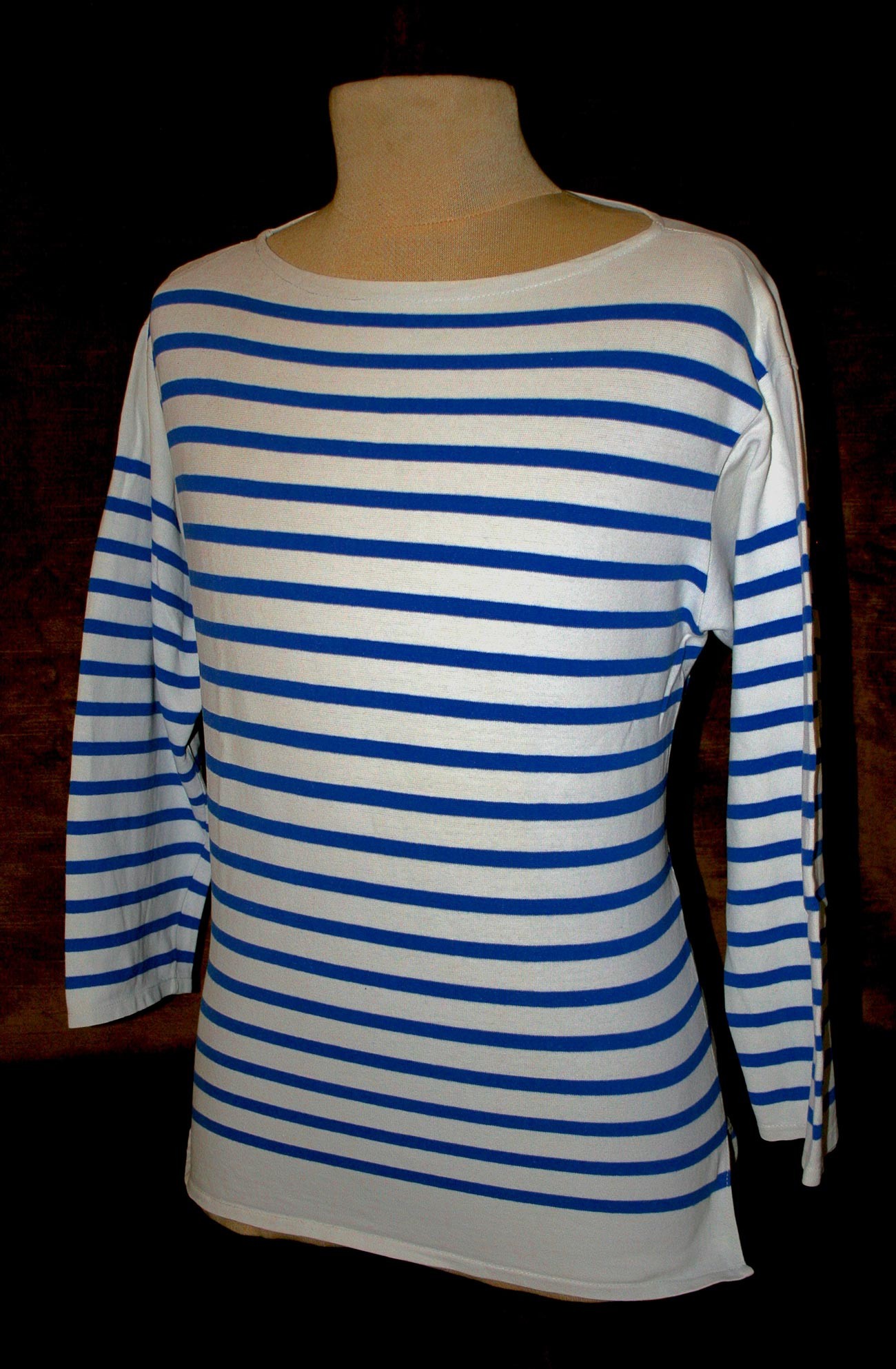 A cotton long-armed shirt with horizontal blue and white stripes, called a marinière, was worn by French sailors as early as the 17th century to distinguish themselves from other sea-faring nations. It is also called a Breton shirt because many sailors in the French Navy were from Brittany.

The stripes were there for an obvious reason – visibility. In the dark, in the fog, or during sea storms and downpours at sea, a man in a striped shirt was clearly visible, even amidst crashing waves. Remember that the first swimsuits were also striped – for the same reason. Also, a sailor in the striped shirt was visible against the sails, while adjusting them. 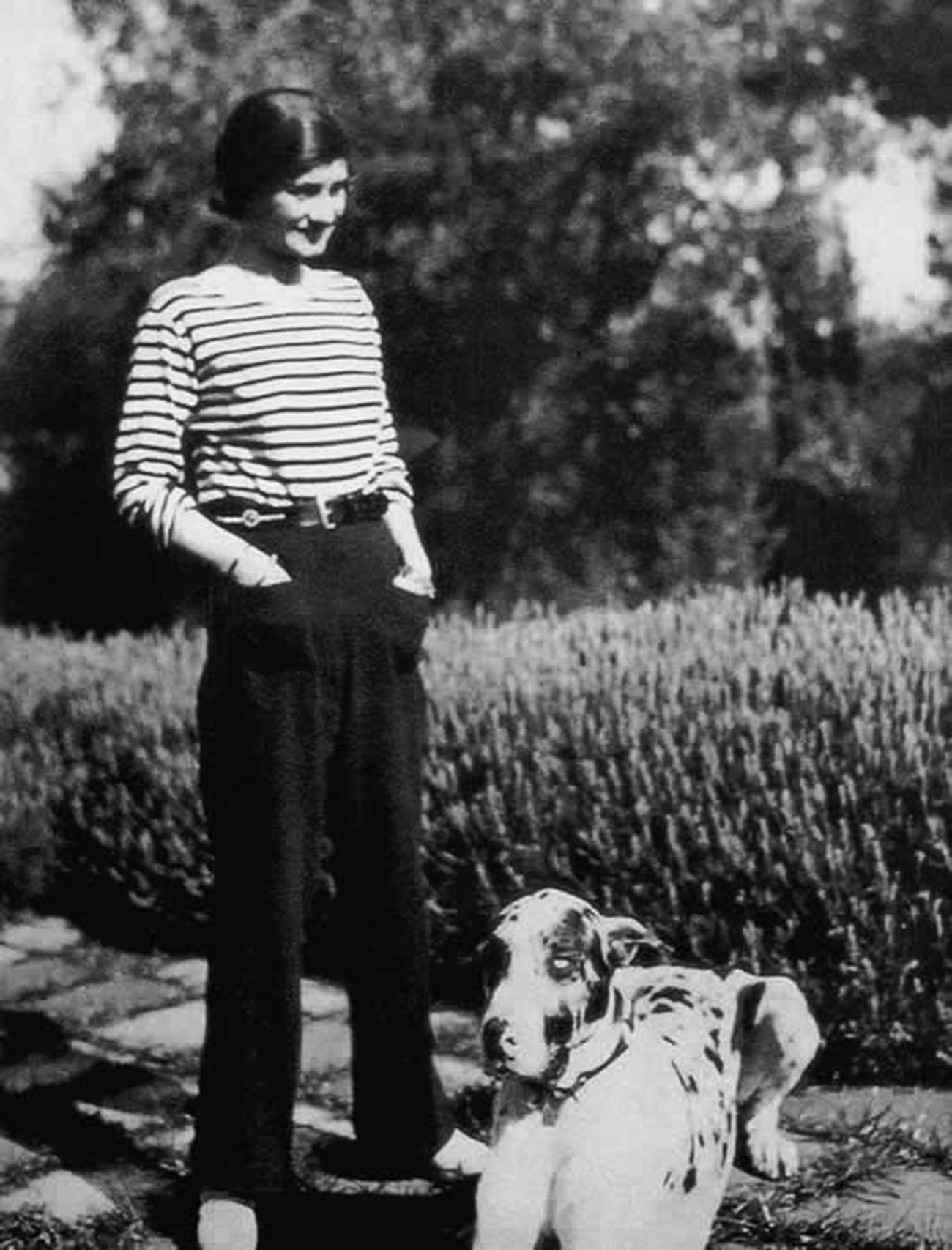 Gabrielle Chanel in a marinière, in the interwar period

The shirt became so closely associated with the French that it became a part of the stereotypical image of a French person. In 1858, the Breton shirt became the official uniform for French seamen. Soon enough, it was also introduced in the Russian navy (1874) and the Dutch navy (1877).
August 19, 1874, is considered to be the “birthday” of the Russian tel’nyashka – on this day, a law on the navy uniform was signed by the Russian Emperor Alexander II. The name tel’nyashka is derived from the Russian word “telo” (тело, ‘body’) because it was the garment closest to the body. 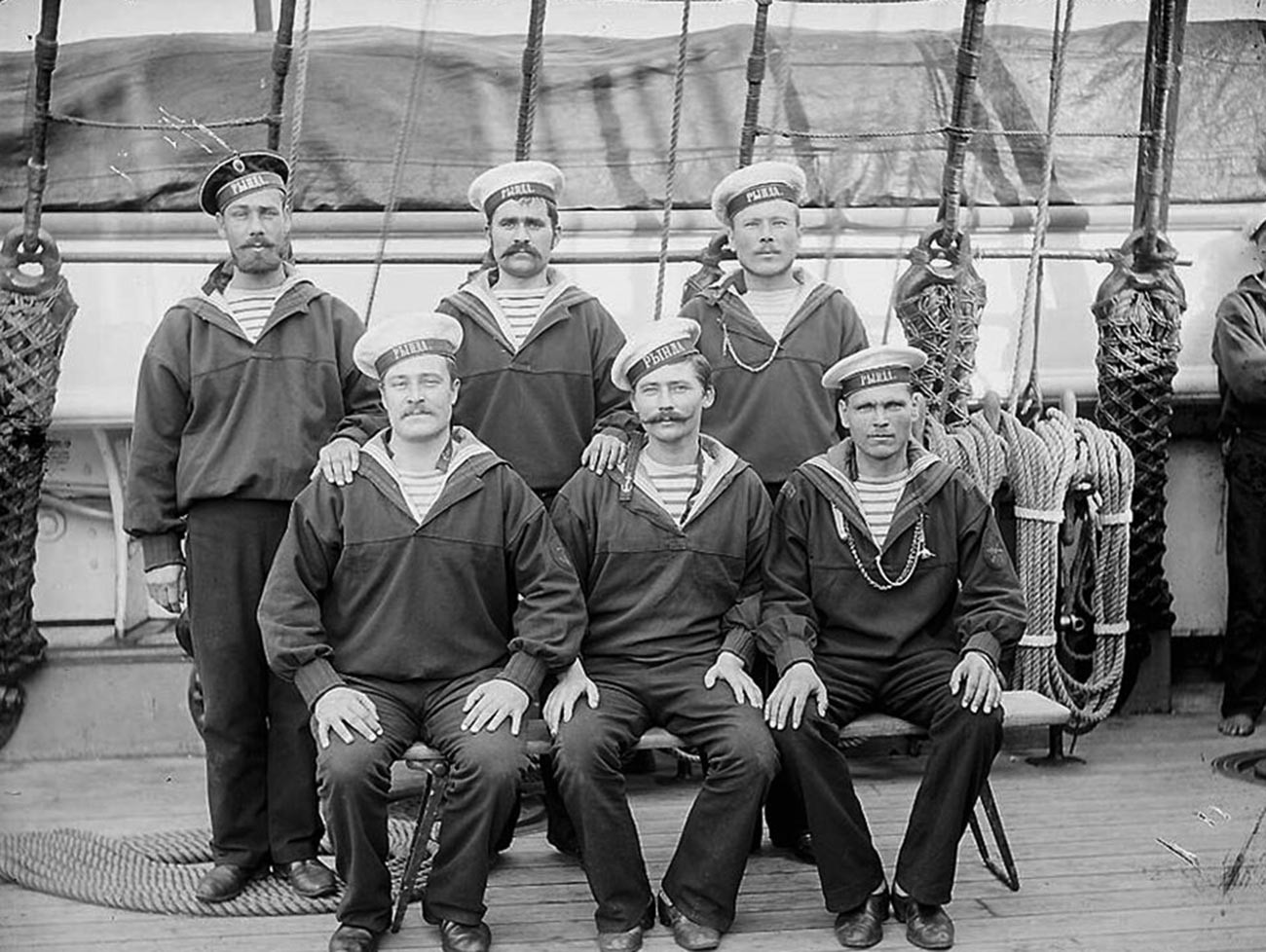 Russian sailors of the 19th century in an old-style tel'nyashka

But the tel’nyashka of those days did not yet go by that name and looked different from today. It had blue stripes 11.11 mm (0.43 inches) wide divided with white stripes 44.45 mm (1.75 inches) wide and was 50 percent cotton, 50 percent wool. Blue and white were the colors of St. Andrew's flag, the main Russian naval ensign since the times of Peter the Great. However, some formations of the Russian Imperial navy had tel’nyashkas of other colors – for example, red. 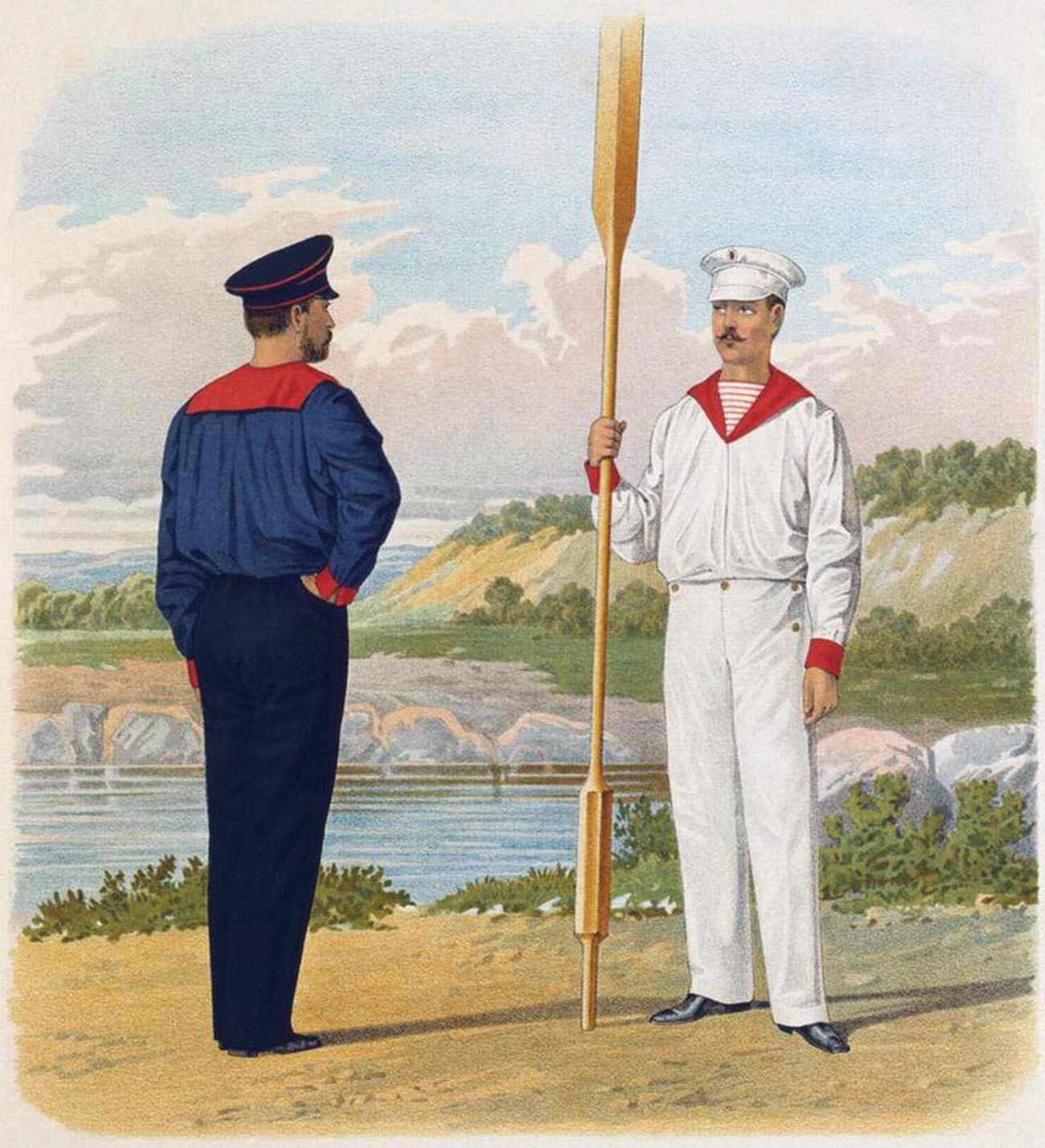 A Russian sailor in a red-striped tel'nyashka.

In 1912, the Russian tel’nyashka gained its classical form – blue and white stripes of identical width: 0.43 inches. The number of stripes varied depending on the shirt’s size. 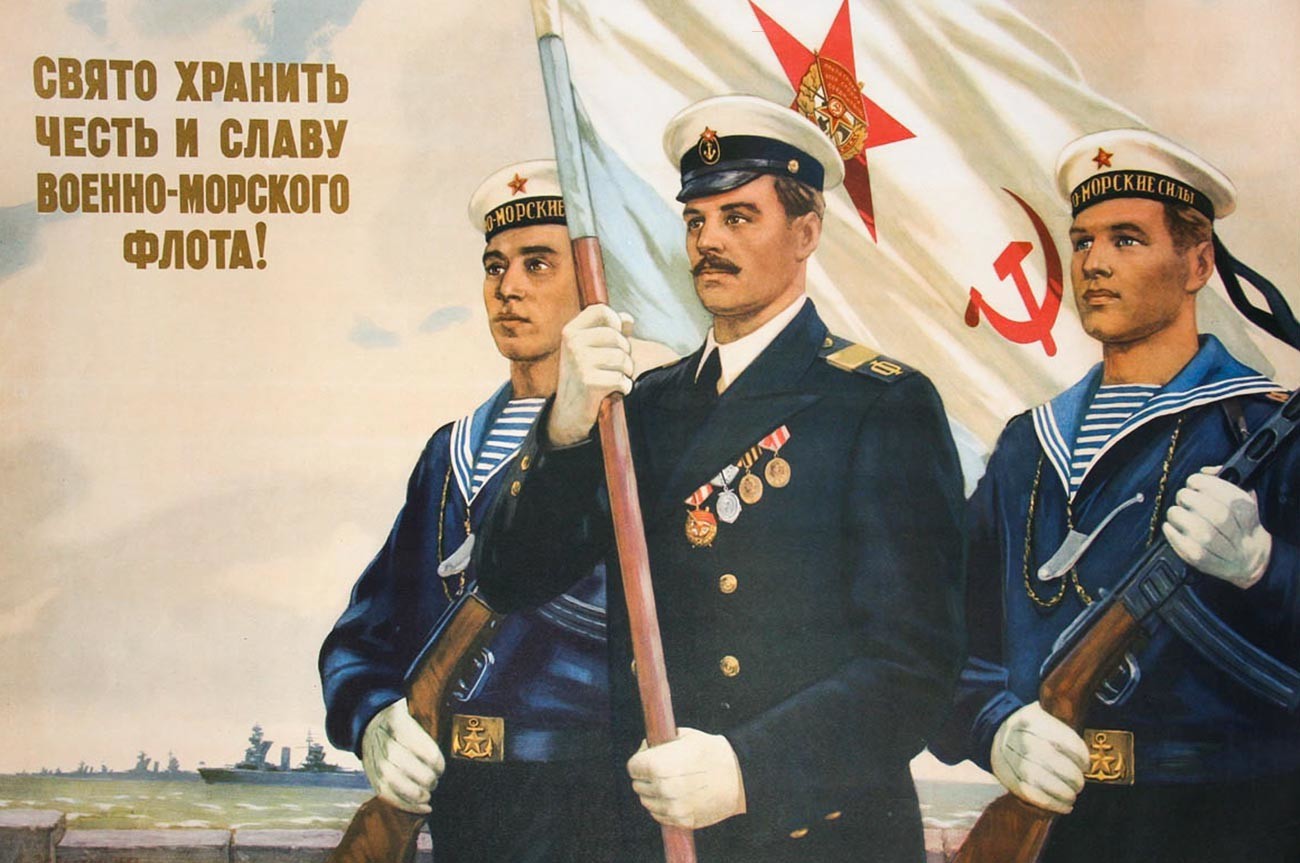 Tel’nyashka gained a new significance during the February and October Revolutions of 1917, when the sailors of the Baltic fleet became one of the main enemies of the Tsarist government. Later, on numerous Bolshevik agitational posters, striped-chested sailors embodied the image of fierce revolutionaries.

Before and during WWII, a new kind of elite military branch appeared in the USSR – Airborne Corps. These quick-response units, manned with the most physically strong troops, able to undertake complicated and dangerous operations involving parachute landings were the menacing power of the Soviet Army. After WWII, the development of Airborne Forces was carried out mainly by General Vasily Margelov (1908-1990). 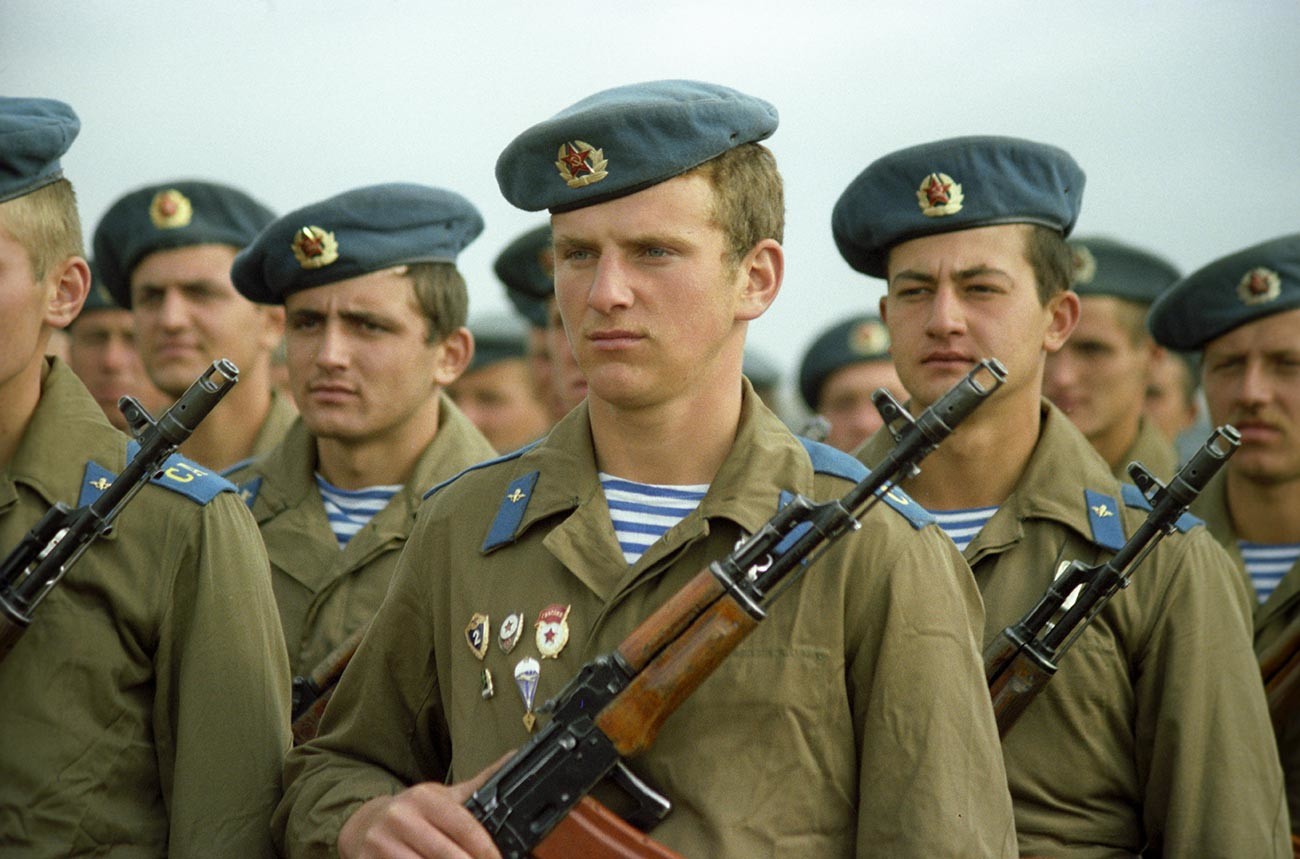 Soldiers of the Airborne Corps of the USSR

However, according to the Soviet Airborne Corps tradition, a newcomer gained the right to wear a tel’nyashka only after he performed his first parachute landing on water.

Today’s four colors and the ‘Mit’ki’

In today’s Russian army, tel’nyashka comes in different colors for different military corps. The sailors (including submarine forces) wear a classic white-and-navy-blue tel’nyashka. Members of the Kremlin Regiment wear an indigo-blue one. Coast Guard of the Border Service of the FSB brandish light green stripes on their tel’nyashkas, dark rose is the color of the stripes for the Rosgvardiya tel’nyashkas, and the men of the Ministry of Emergency Situations wear orange-striped shirts.

But the tel’nyashka is not reserved solely for the military men. It is and always was a symbol of freedom and even lawlessness – a homage to the unruliness of the Baltic sailors in the years of the Revolutions. This is why many Soviet and Russian rebels and delinquents in film and fiction are often seen wearing a tel’nyashka. 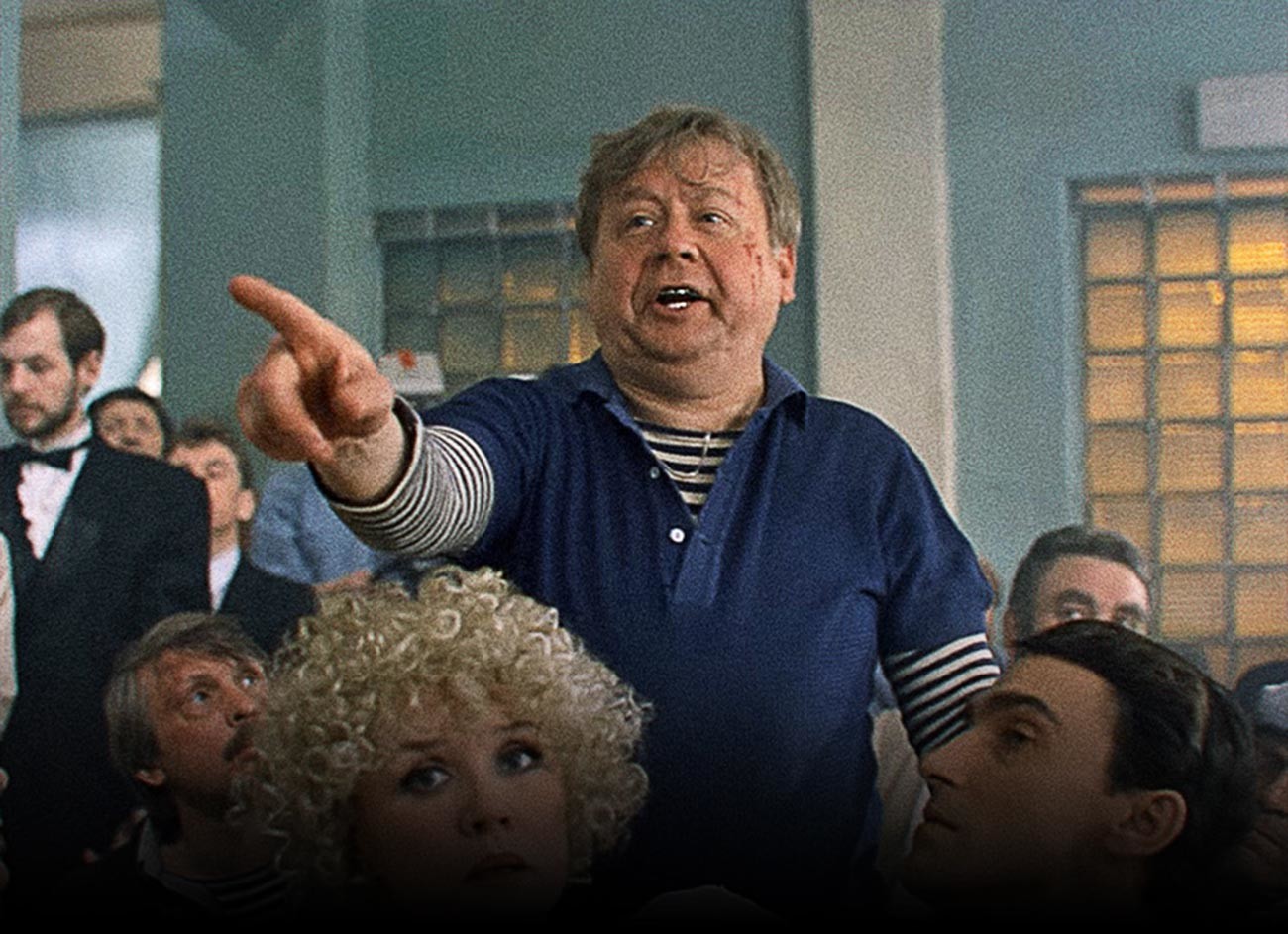 The Tel’nyashka has also become the symbol of a St. Petersburg art group called ‘Mit’ki’ (“The Mityas”), taking their title from the name of their founder and leader, Dmitry “Mitya” Shagin. St. Petersburg is and always has been a navy city, founded by Peter the Great as the base for the Baltic fleet, so in St. Petersburg, a tel’nyashka is an unmistakable symbol of “our guy” – the symbol widely employed by the “Mit’ki” in their primitivist and heartfelt pictures.