This was the BEST Soviet accesory ever! (PHOTOS) 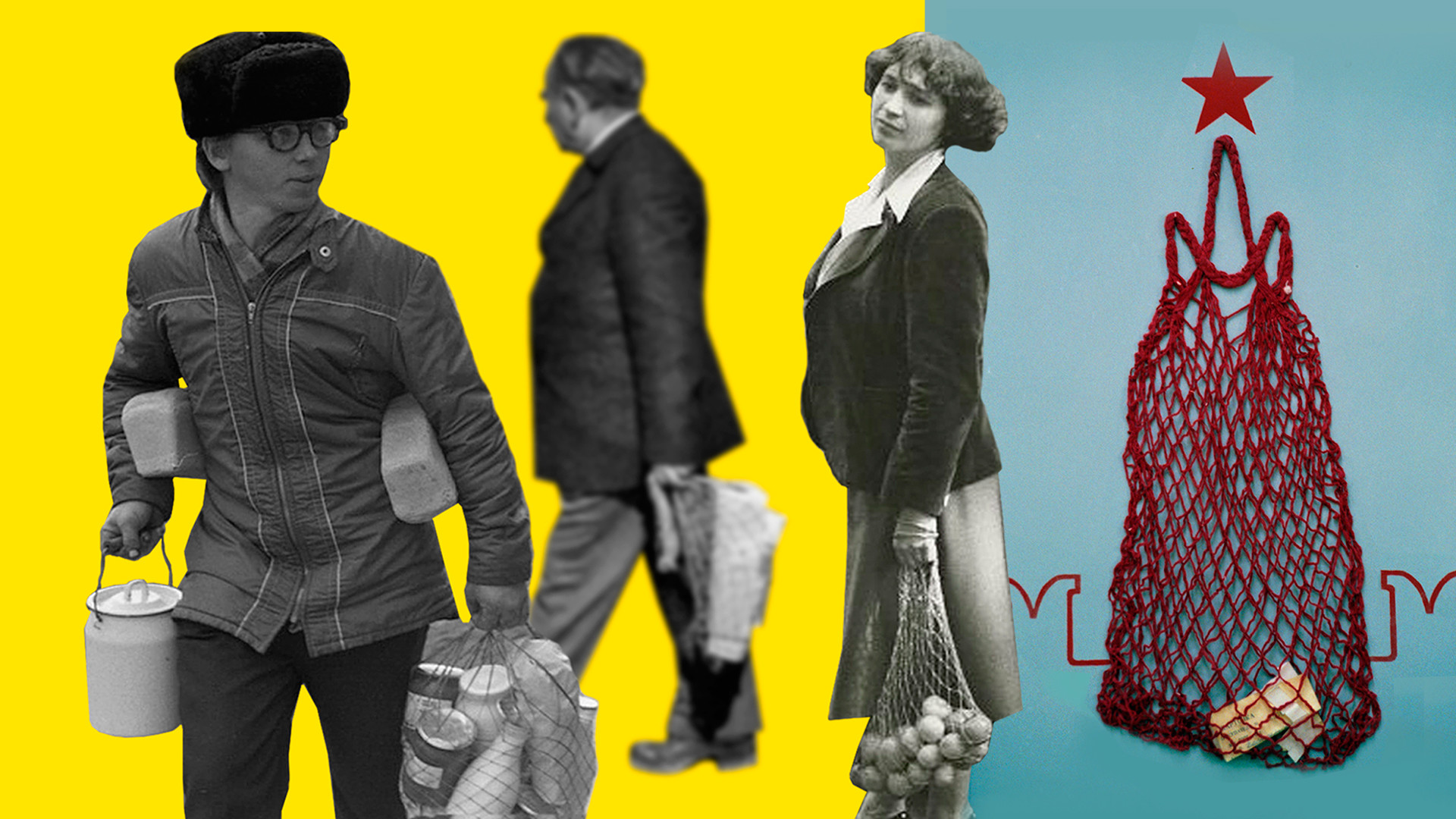 © Gennady Popov/TASS; Pavel Sukharev; Vladimir Vorobiev; Anatoly Boldin/MAMM/MDF/russiainphoto.ru
In the USSR, literally everyone used an 'avoska.' These days, this humble string bag has made a comeback as a global fashion trend. What is its secret? 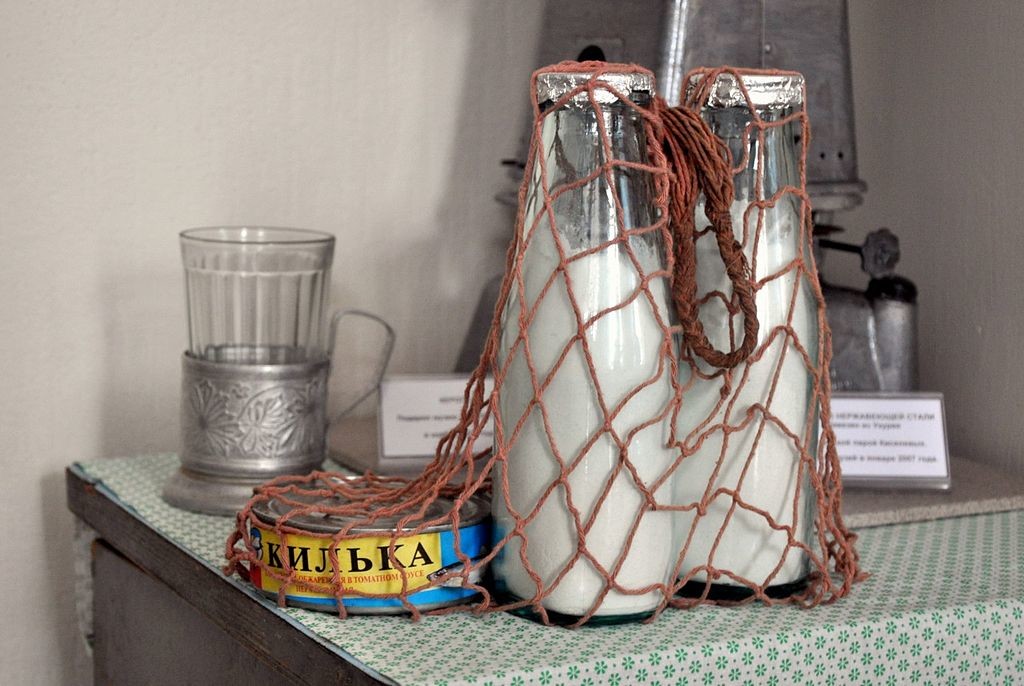 Every person in the Soviet Union carried an avoska everywhere they went. This string bag is incredibly convenient, as it fits easily into a handbag, a briefcase, even a pocket! An avoska could hold up to 70 kg (154 lbs) and, like Mary Poppins’ bag, could fit an infinite number of items. It was ideal for carrying a watermelon and it did not get torn by the sharp edges of grocery packages, especially Soviet pyramid milk packs.

Mass production of avoskas began in the USSR in the 1930s: the net bag always had 14 rows, each consisting of 24 cells. At first, the avoska had string handles, like the rest of the bag. Later they were replaced with flexible tubes, which were easier to hold. The avoska had its own accessories that were sold separately, the coolest of which was a special hook for hanging your bag, for example, on a rail on public transport - very convenient!

The only drawback of the avoska was its 'transparency': the contents of your bag was there for everyone to see. That said, privacy was not something that Soviet people took for granted, so they did not carry anything “untoward” in their net bags. Hence the comedic effect of an episode in Leonid Gaidai’s cult comedy ‘The Diamond Arm’, when the main character puts a pistol in his avoska in the hope of hiding it from view.

2. Its origins may go back to the fishing net, or not 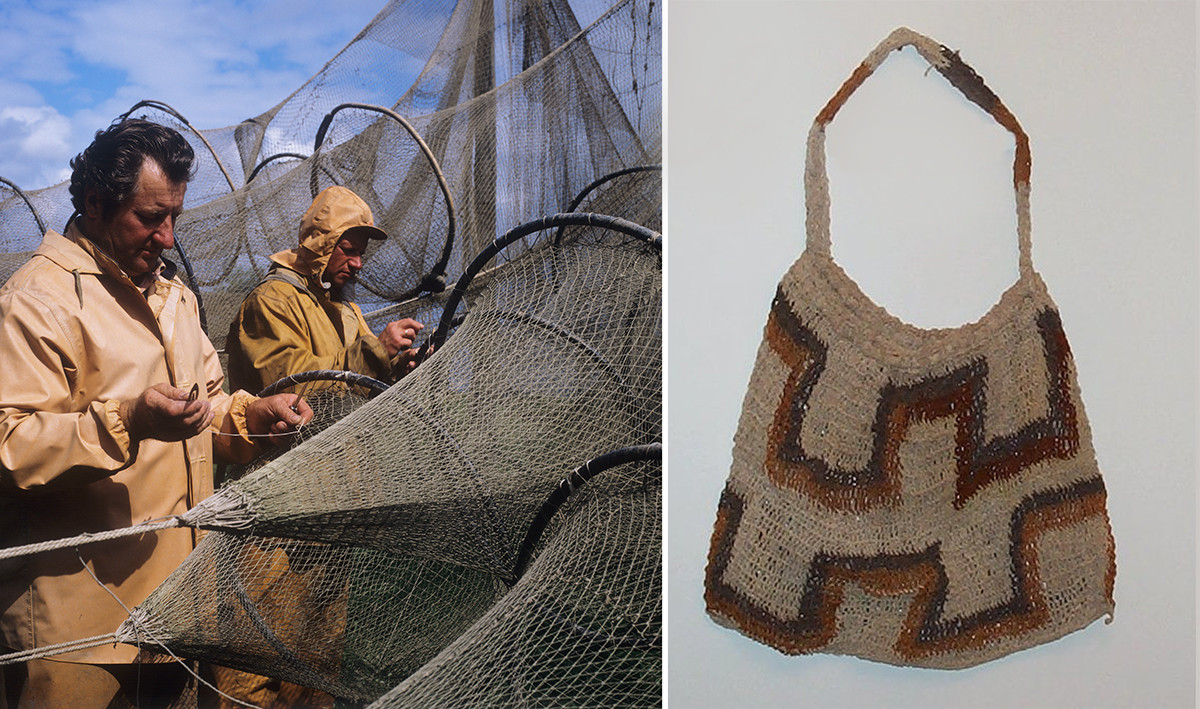 So, who came up with this miracle of functional design? There are several – not mutually exclusive - theories as to how the avoska was invented. Its Russian origin story goes back to the fishing net, as fishing was (and still is) very widespread in Russia. Furthermore, Russian craftsmen traditionally were very skillful at weaving various items from a variety of materials: bark, vines, threads or ropes, and the first Russian string bags were knitted with the same knots.

There is another Czech theory of the origins of the string bag. At the end of the 19th century, entrepreneur Vavřín Krčil launched the production of women’s hair nets. “The business was not going very well, so Krčil came up with a new use for the already manufactured nets. He attached handles to them and began to sell them as bags,” says Olga Druzhinina, development director at the Moscow Design Museum.

The string bag can be considered a distant relative of the bilum. “Bilums are special mesh bags in which women in Papua New Guinea and Panama used to carry babies (and still do): they swing the bag with a baby onto their back and rest its wide strap against their forehead,” Druzhinina explains.

3. The word avoska derives from the particle avos’ 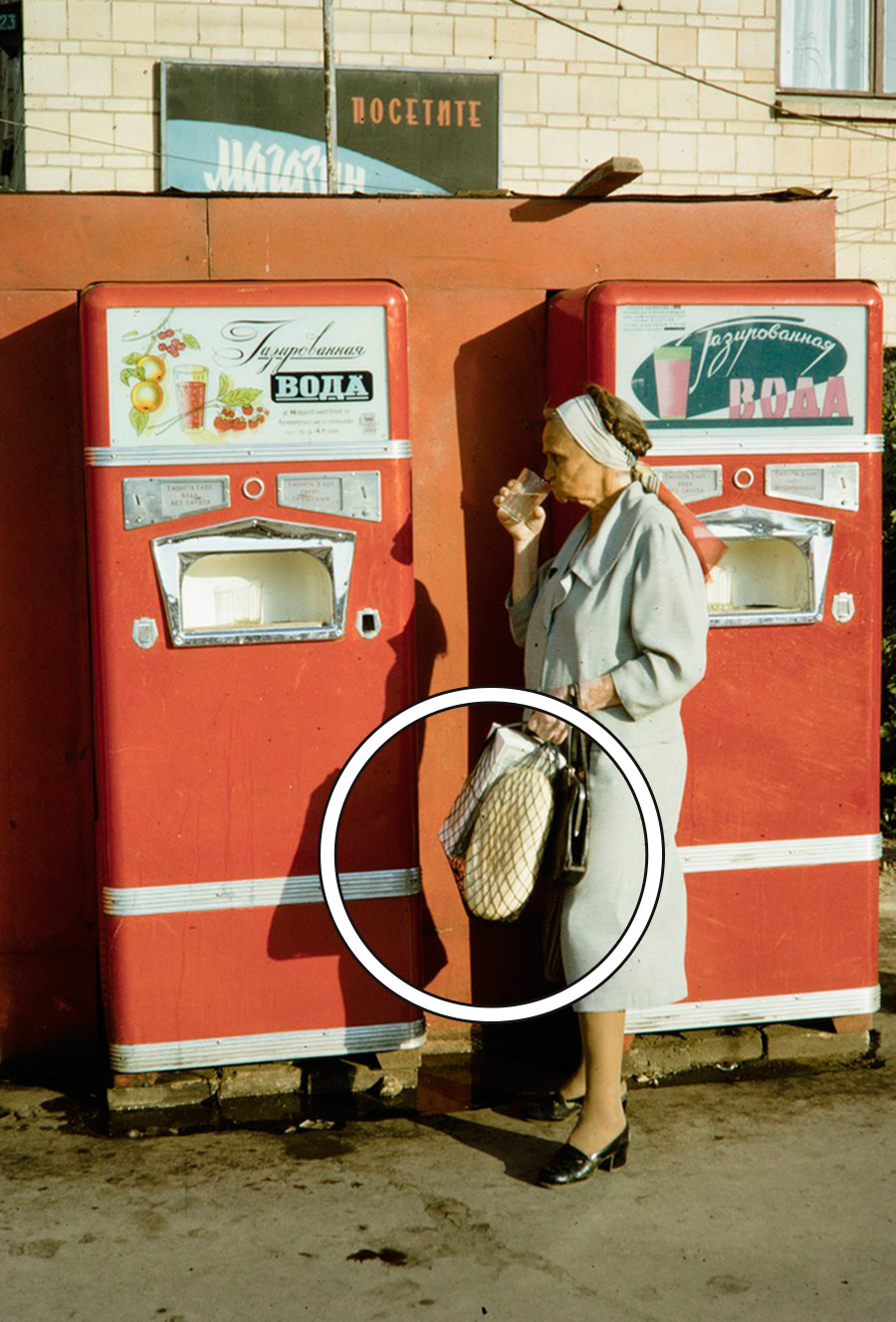 Everything ingenious is simple. This is true of both the avoska itself and the origin of the word, although many people are still surprised to discover the latter. The avoska can be translated into English as a “maybe bag” or a “what-if bag”. The first string bags appeared in Russia after the revolution. In her memoirs, Leo Tolstoy’s daughter Alexandra described the years of the Russian Civil War as follows: “People were walking along the pavement, pulling sleds behind them, or carrying sacks and avoska bags, called so in the hope that maybe they will manage to get something to put in the bag – some butter, horse meat, dry roach or herring.” The word avos' means “maybe” with a connotation of hope for success although there is little reason for this hope.

The word avoska became widely used in the 1930s, with the beginning of mass production of these string bags, and gained popularity thanks to a sketch by popular Soviet comedian Arkady Raikin, in which he portrayed a man with a string bag and joked: “This is a what-iffie. What if I bring something in it…” 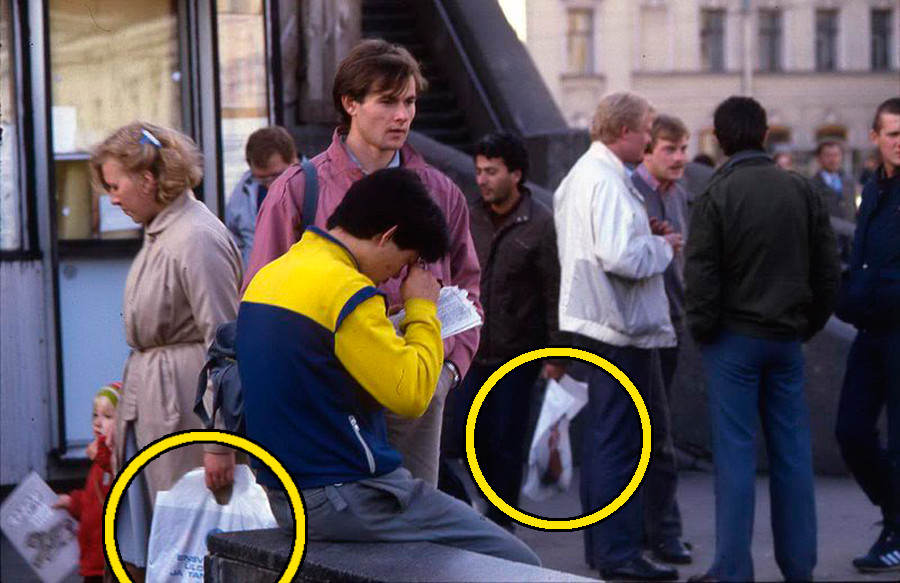 Avoskas stopped being an essential everyday item for Soviet people in the late 1970s with the arrival of the first plastic bags. The latter most often were brought from abroad and quickly became a downright fashion accessory. But old habits die hard, so Soviet people - same as with their avoskas - washed their plastic bags, dried them and used them again (and threw them away only when they became completely unusable).

Yet the avoska has survived in its other incarnation, that of a kitchen appliance for storing garlic and onions, or hanging food out of the window in winter, popularly known as “refrigeration Soviet style”. Avoskas were also used as an ordinary fishing net – for catching crayfish.

5. Back in fashion again 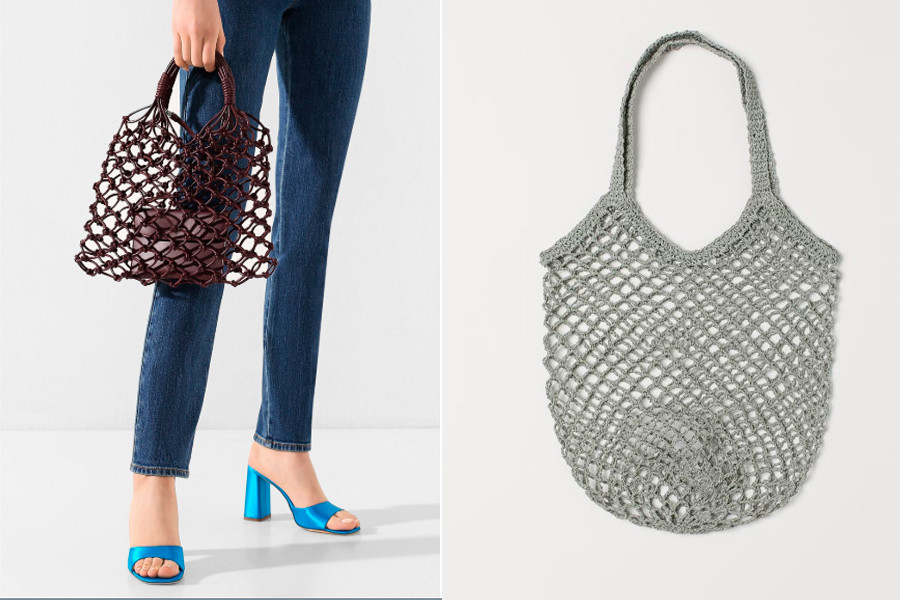 The USSR had many eco-friendly habits: in addition to collecting waste paper and scrap metal and holding subbotniks, one of those habits, undoubtedly, was going shopping with a string bag. Given the current attention to environmental problems and efforts to stop the use of plastic, the avoska has made a comeback as an excellent and cheap alternative to the despised plastic bags that pollute our planet.

It turned out that the avoska is not only environmentally friendly and practical, but also very cheap! Its basic varieties start at 150 rubles (approx. $2), however, an increasing number of fashion designers are creating their own versions of the string bag - trendy and, of course, very expensive. The avoska has inspired fashion brands Prada, Kenzo, Stella McCartney, whose varieties of the humble string bag cost anywhere from 30,000 rubles (approx. $400). Incidentally, the avoska has also entered the everyday life of ordinary Russians in another way – as the name of an affordable supermarket chain.