5 gangsters that TERRORIZED Russia in the early 20th century 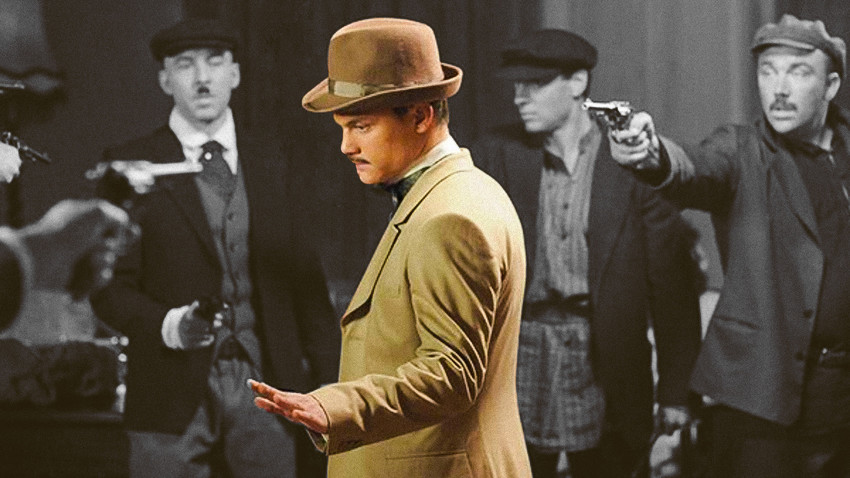 Sergey Ginzburg/ Channel One Russia, 2011
These criminals would have made a great cast in the newly released Mafia: Definitive Edition game if it was set in revolutionary Russia. 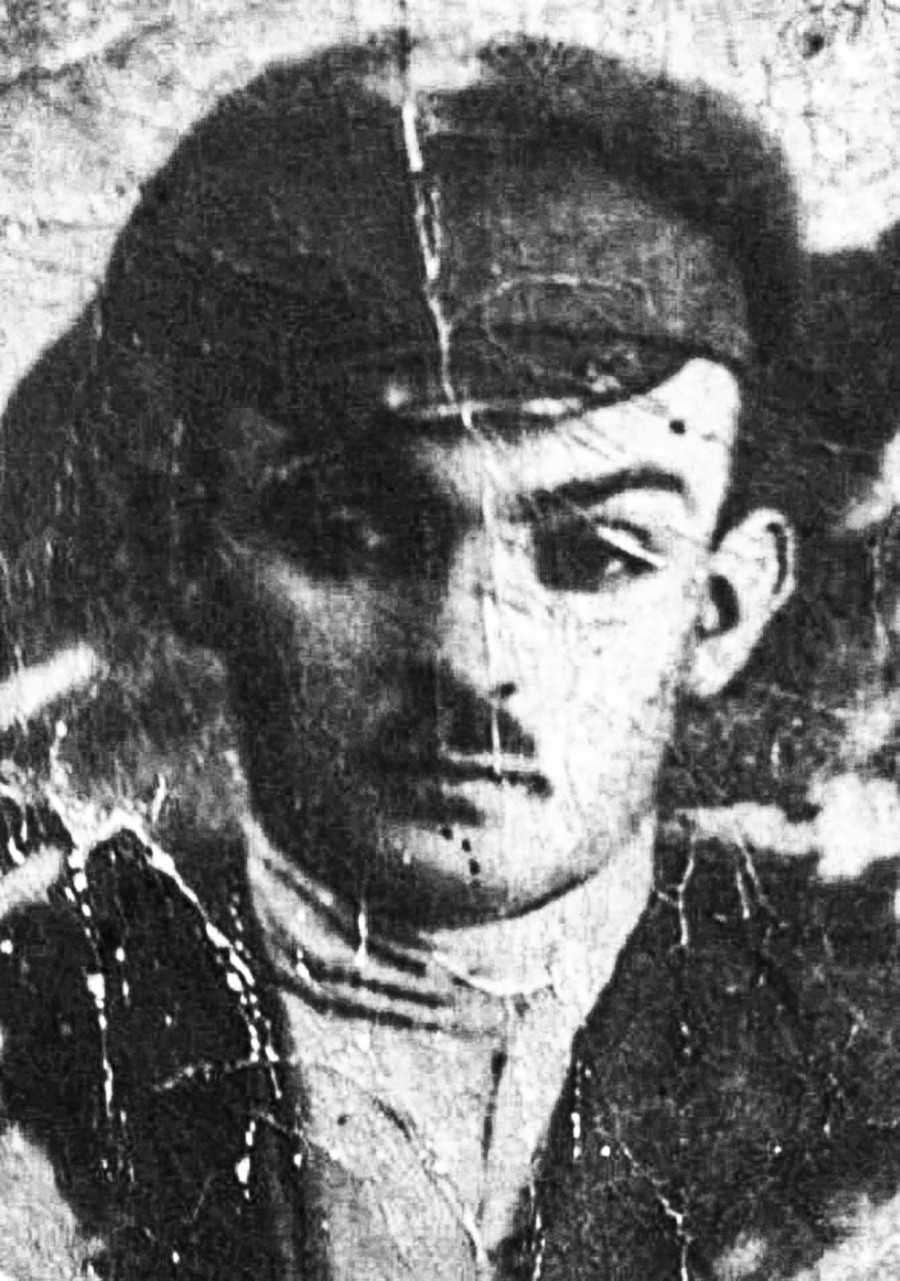 A picture of Mikhail Vinnitsky, the legendary criminal killer of Odesa, widely known as Mishka Yaponchik and Babel's Benya

Audaciously bold and incorrigible, this daredevil rushed into the 20th century’s underworld with a splash loud enough to reverberate in popular culture a whole century later. During his prime years — 1917-1919 — Yaponchik and his gang raided stores, factories and even a brothel that the mobsters adopted for their needs, converting the lewd establishment into their headquarters.

“Yaponchik has good organizational skills. This made him the king of the criminal world on the Odessa scale. Bold, enterprising, he managed to get his hands on all the Odessa thugs. In American conditions, he would undoubtedly have made a great career and could have firmly stepped on the toes of even Al Capone,” said renowned Soviet singer Leonid Utesov of the gangster, who he knew as both were born in Odesa and shared Jewish origin.

Surprisingly, Utesov also noted that Yaponchik did not stand the sight of blood — a rather odd weakness for a person of his occupation. “He turns pale at the sight of blood. There was a case when one of his subjects bit his finger. Mishka was screaming like he was stabbed,” said Utesov of his acquaintance.

Although Yaponchik did not sympathize with the White movement — anti-communist forces who fought the Bolsheviks after the 1917 revolution — he was a misfit for the Red Army, too. His inner appetite for anarchy, looting and heist did not correspond well to the Bolshevik’s plans of subjecting this Odessa gangster to their new hierarchy. Their short-lived “marriage” ended in a split when Yaponchik and his mobsters had had enough of their share in the Russian Civil War and disbanded their ill-disciplined regiment that consisted of criminals, gangsters and anarchists. The defectors hijacked a passenger train intending to return to their native Odessa.

However, the thugs’ plan did not work out as intended and Yaponchik was killed by a Red Army detachment that had stopped the train on August 4, 1919. 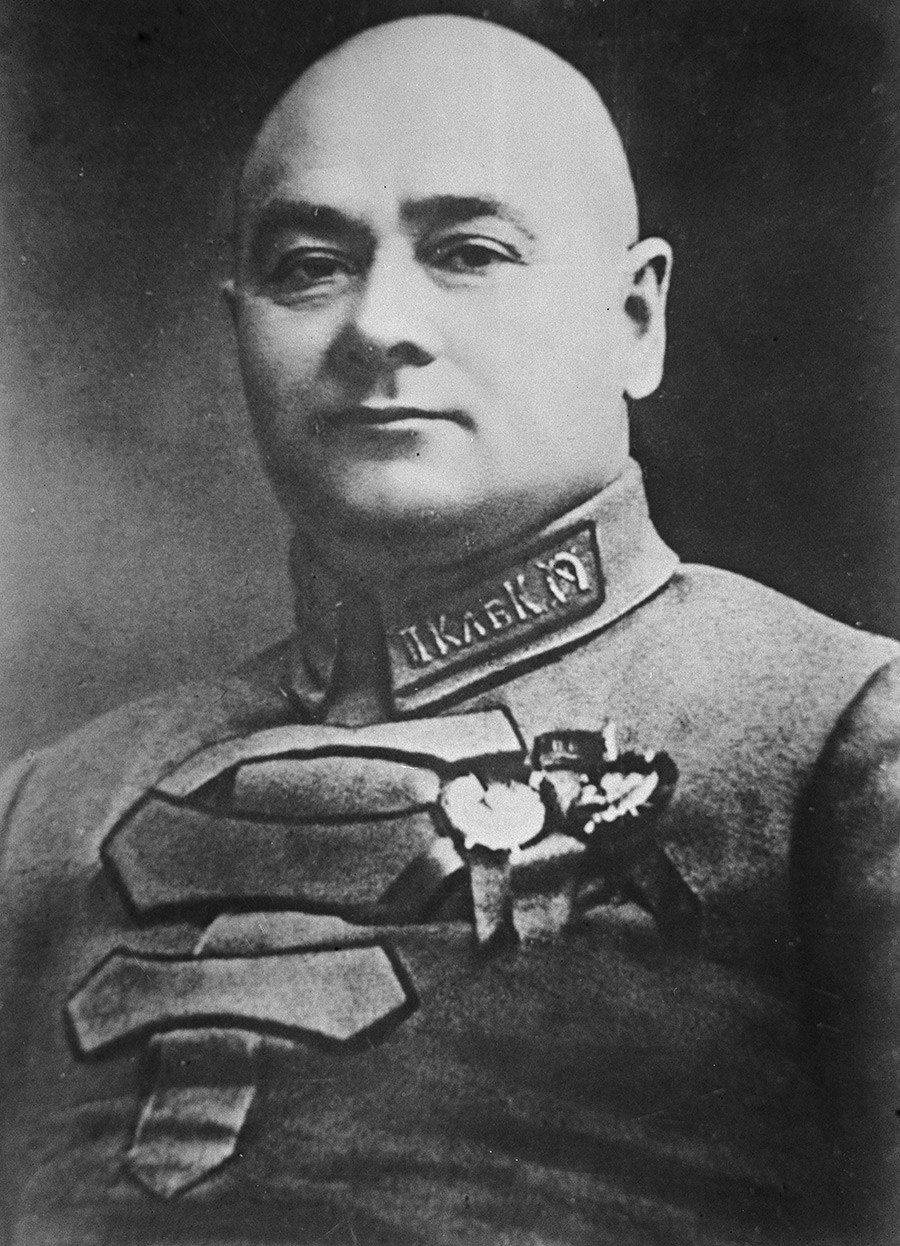 This image of a respectable political figure, decorated with numerous medals for heroism in combat, may have seemed incompatible with the notorious reputation of a violent mobster, yet Kotovsky excelled in both these roles.

At first, he justified his raids on merchants and their apartments, landowners and officials, and even banks, citing the revolutionary struggle as his cover. Kotovsky had strong charisma that helped him control and lead other criminals and later paved the way for him into the Soviet political and military leadership.

“[Kotovsky] leaves the impression of quite an intelligent person, smart and energetic. In his treatment, he tries to be elegant with everyone, which easily attracts the sympathy of all those who have communication with him. He can pass himself off as a manager of estates, or even a landowner, a machinist, a gardener, an employee of a company or enterprise, a representative for the preparation of food for the army and so on. Tries to make acquaintances and relationships in the appropriate circle… In conversation, noticeably stutters. Dresses decently and can play the real gentleman. Likes to eat well and exquisitely,” described a secret police dispatch of the mobster.

Kotovsky was arrested multiple times, but always found a way to escape prison. Once, he allegedly sold his shackles at an ad hoc auction at the Odessa opera house on the day of his yet another release from prison in May 1917.

As the Bolshevik Revolution spread across the Russian Empire, Kotovsky gained so much influence with the new authorities that when he was murdered in 1925 by a former associate of Mishka Yaponchik, the authorities threw a solemn state funeral and buried the ex-mobster in a mausoleum erected anew specifically for this purpose in 1925 in a settlement of Birzula (now the city of Podolsk, Ukraine). 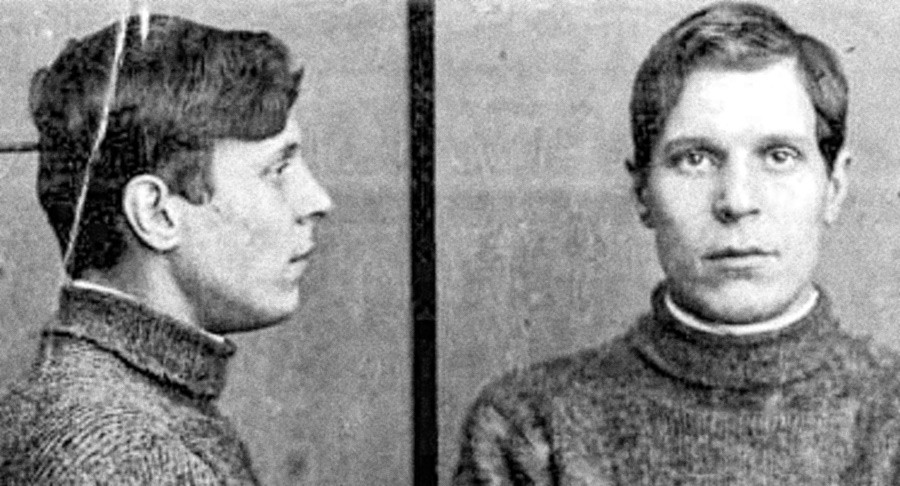 The criminal who robbed the leader of the Russian Revolution Vladimir Lenin — this is how this mobster and thief from Moscow went down in history.

Koshelkov, whose real name was Kuznetsov, came from a family of a thief: His father was a convict sentenced to indefinite exile in Siberia for numerous armed robberies. His son, Yakov, unhesitatingly followed in his footsteps.

By the age of 27, Kuznetsov was already arrested and convicted ten times. He began his criminal career as a pickpocket at Khitrovka, a square in the center of Moscow. Soon enough, he achieved a serious status among the Moscow underworld and managed to build his gang, who terrorized common people and even some Moscow-based factories.

Arrested in February 1918, Kuznetsov escaped from under arrest by seriously injuring two and killing one guardsmen with a gun wrapped in a loaf of bread that was passed to him by his accomplice.

On January 6, 1919, Koshelkov and his gangsters accidentally stopped Vladimir Lenin’s car. The criminals did not know the car belonged to the head of state and ordered everyone to get out, as they needed the vehicle to commit another robbery.

Lenin, his sister Maria Ulyanova, Lenin’s driver and bodyguard obeyed, after the criminals failed to recognize who they were robbing. According to Lenin’s driver, the leader of the Russian Revolution protested at first and named himself, but Koshelkov misheard Lenin’s name. “What’s wrong? I’m Lenin!” Protested the politician. “The hell with you that you are Levin. I am Koshelkov, the master of the city at night,” Koshelkov replied brusquely.

By the time the mobster realized who he robbed, Lenin’s aide had already reported the incident to the secret police that was actively searching for Koshelkov and his accomplices. Koshelkov managed to evade the police for six more months, conducting armed raids and robberies in the meantime. However, on July 26, 1919, he was ambushed by the police, hit with six bullets and killed. When the body was searched, Lenin’s Browning gun was found on him. 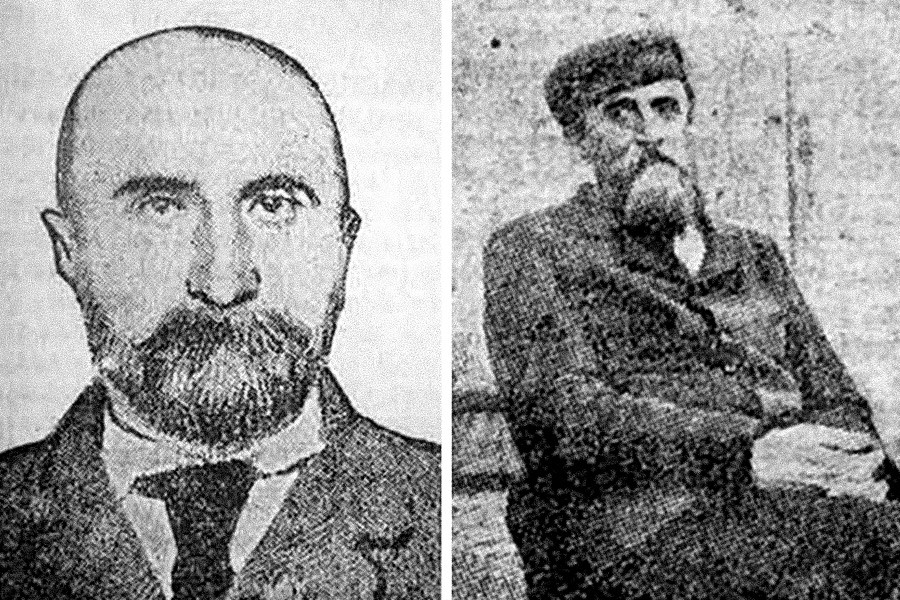 Not all Russian gangsters were from simple families, at least one of them came from a noble ancestry. Nikolay Savin was known as an international criminal and opportunist — alike American conman and impostor Frank Abagnale — yet few facts of his biography are corroborated and some of his declared deeds are so ridiculously outrageous that they raise suspicions about their validity.

For example, there is a story of Savin tricking an American millionaire into buying the Winter Palace in St. Petersburg (that is currently a part of the Hermitage Museum) from him for a few million dollars in cash. Supposedly, Savin fooled the American by providing him with the paperwork sealed by simple coin prints and a mocking message written in Russian.

He is also claimed to have fooled the Italian government by promising to sell Russian horses to Italy and then disappearing with the advance payment.

Another story has it that Savin appeared before Sultan of the Ottoman Empire Abdul Hamid II posing as Grand Duke Konstantin Nikolayevich of Russia, brother of Tsar Nicholas I — his cover supposedly blown up by a hairdresser, who had used to work in St. Petersburg before he moved to the Ottoman Empire.

To make Savin’s life story even more absurd, he is believed to have moved to Osaka, Japan, lobbying the Japanese to wage a war against the Bolsheviks and then believed to have relocated to Shanghai, where he died in poverty.

Yet, the most famous story of Savin’s fraud is related to the theft of diamonds from the bedroom of Princess Alexandra of Saxe-Altenburg, a wife of Nicholas I’s second son, in the Marble Palace in St. Petersburg. Although this crime really happened, Savin was not even questioned in relation to the case at the time of investigation that had established another culprit: Grand Duke Nicholas Constantinovich of Russia, who had allegedly stolen the diamonds to finance his courtship to American paramour Fanny Lear. Savin is often mentioned in the context of this historical incident because of his alleged association with Lear. 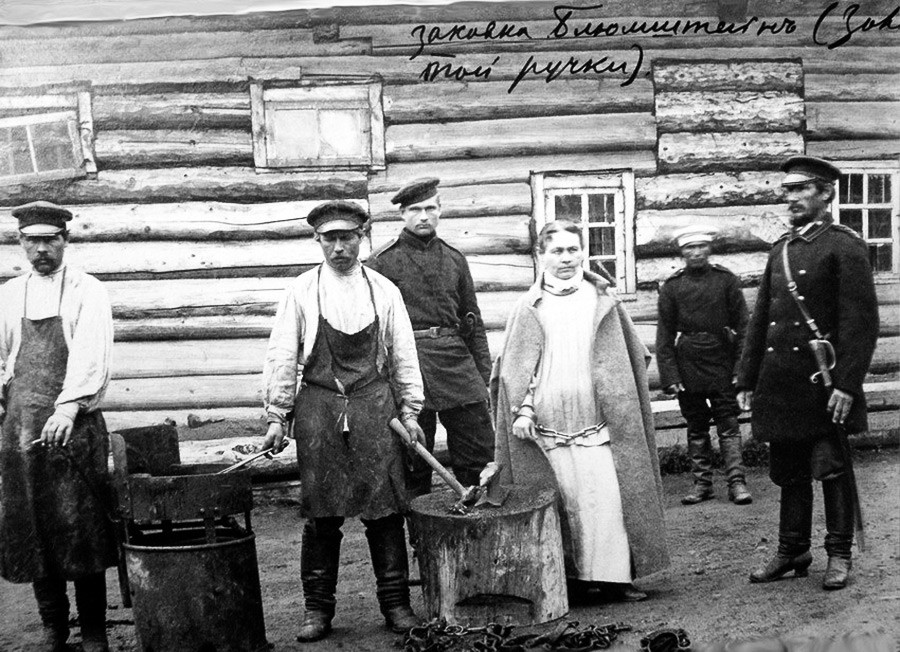 The only woman on the list, this thief and opportunist could easily surpass the achievements of any of the male criminals mentioned above. Sonya Golden Hand — born Sofia Blyuvshtein — was notorious for the gift of artistry and theatrical performance: Her heists were always accompanied by a theatrical change of her appearance.

She was also notoriously charming to such an extent that she was able to seduce her prison guard and talk him into orchestrating her escape from penal servitude that she was sentenced to for her multiple heists in Russia and other European countries.

In 1888, she was sentenced to hard labor and exile on Sakhalin Island in Russia’s Far East. She attempted three escapes and was subsequently shackled by the prison administration. In exile, she met Russian writer Anton Chekhov, who was not impressed by the aging thief and compared her to a mouse.

Click here to read about 5 most SADISTIC gangs of the Soviet Union.