Why did U.S. and Soviet leaders meet in the middle of nowhere during the Cold War? 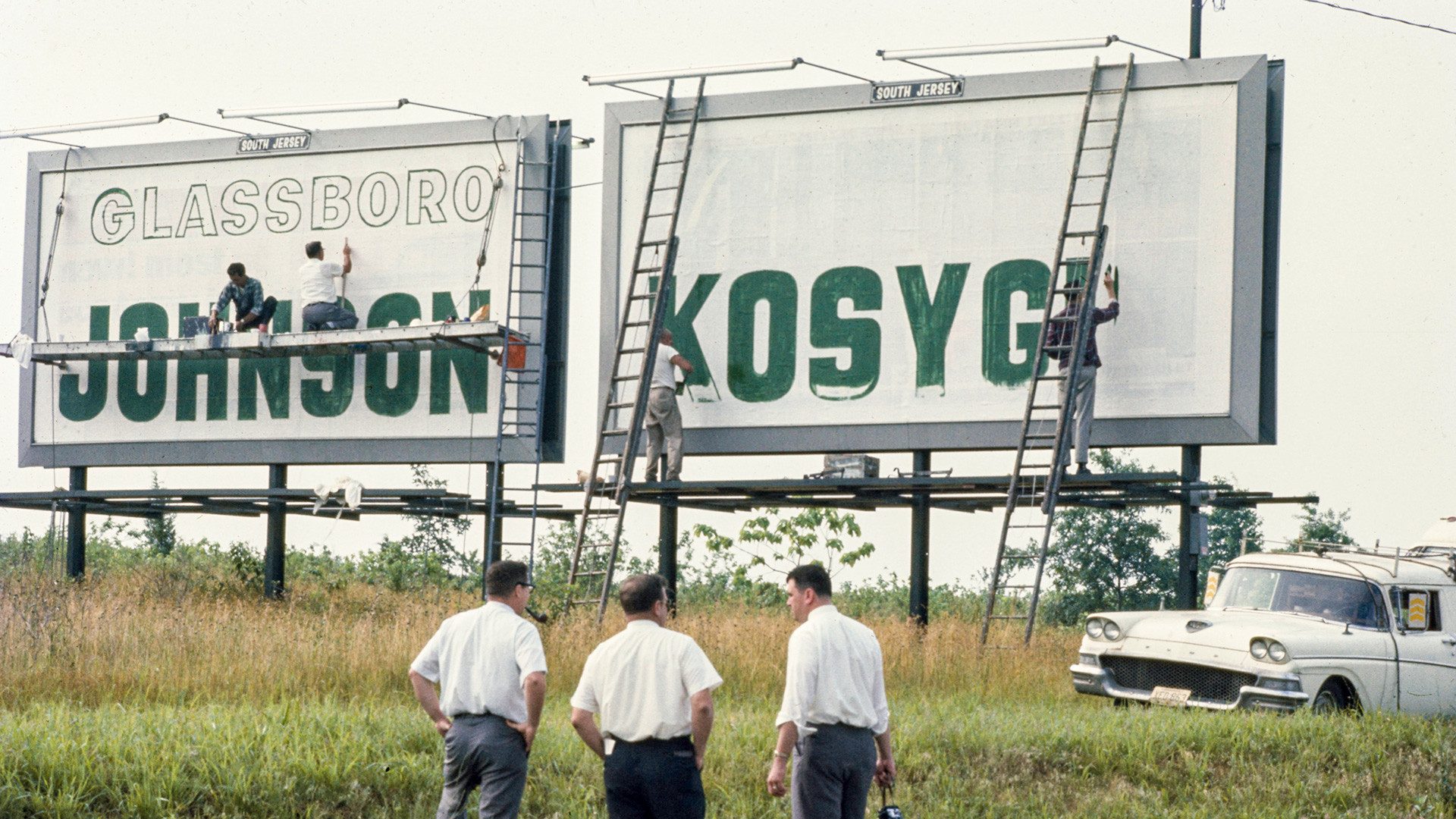 Welcome signs with the names Johnson and Kosygin on the highway during the Glassboro Summit Conference on Soviet-U.S. relations in Glassboro

Getty Images
Glassboro, New Jersey probably won’t mean much even to seasoned experts in international relations. But in summer 1967, it was the capital of the world for three days, when U.S. President Lyndon B. Johnson met with Soviet Premier Alexei Kosygin.

While summer 1967 wasn’t the Cold War’s most tense period — such as during the 1962 Cuban Missile Crisis or the 1979 Soviet invasion of Afghanistan — there was nothing simple and easy about that year in regard to relations between the United States and the Soviet Union.

The U.S. was bogged down in a brutal war against North Vietnam, a crucial ally of Moscow in Asia. Also, a civil war had begun in Nigeria and turmoil in the Middle East threatened to drag the superpowers into direct confrontation.

In this increasingly hostile atmosphere, at the last minute and to the surprise of nearly everyone, the American and Soviet leaders decided to meet. Soviet Premier Alexei Kosygin was going to be in the U.S. anyway to address the United Nations on June 19.

With President Lyndon B. Johnson soon to face re-election (in 1968) some type of foreign policy success would be welcomed. He had come to power in November 1963 after President John F. Kennedy was assassinated in Dallas by Lee Harvey Oswald, who had lived several years in the USSR. 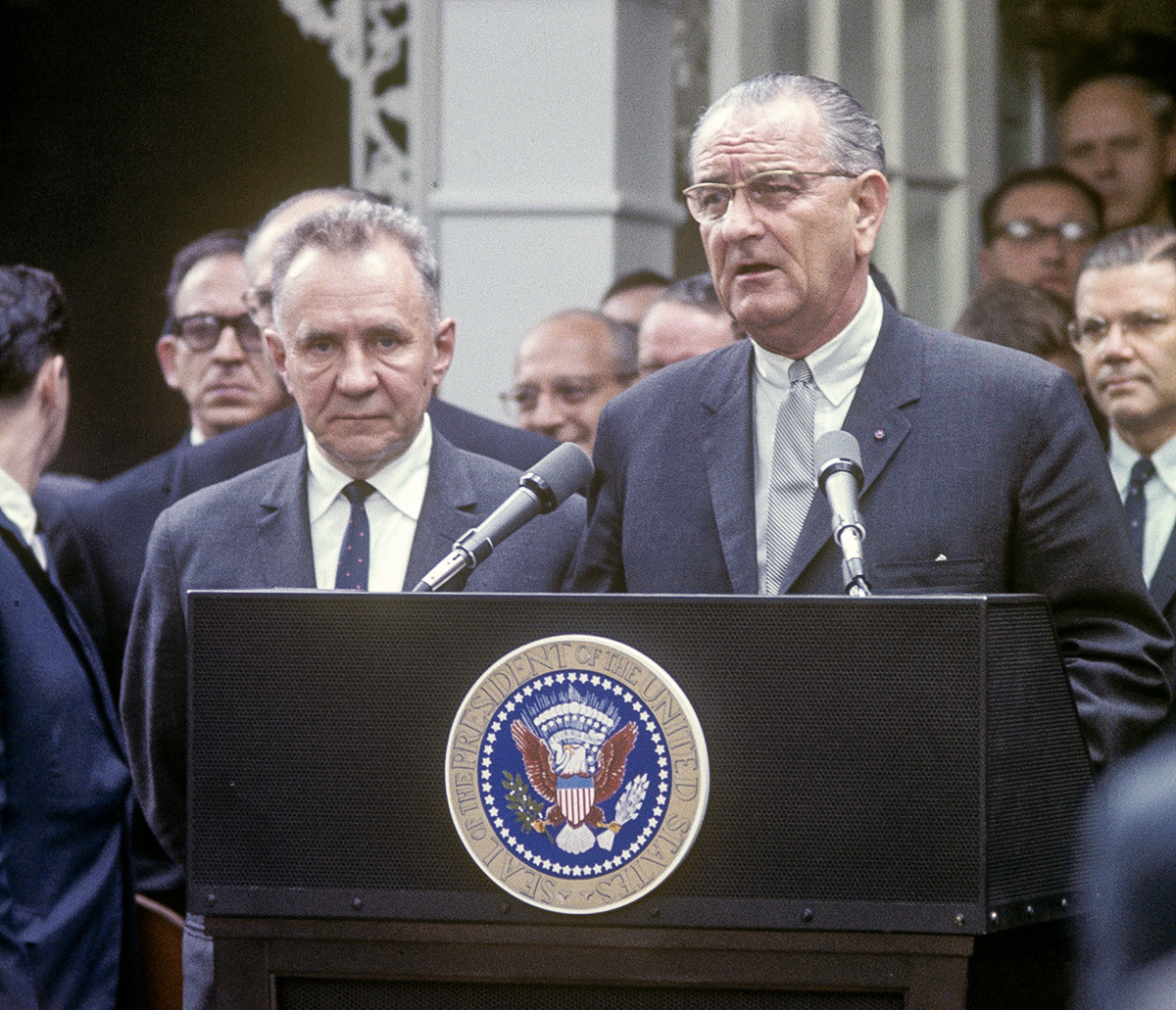 And so, after the UN session, on June 23-25, the two leaders met at Glassboro State College to discuss the most pressing issues threatening world peace. Where? If you’ve never heard of it, you’re not alone. Pretty much in the middle of nowhere in the south of New Jersey, halfway between New York City and Washington D.C., lies the small town of Glassboro.

Here’s the backstory — Kosygin didn’t want to travel to Washington, D.C., and Johnson didn’t want to meet in New York, fearing Vietnam war protests there. The relatively remote Glassboro, a halfway point between those two major cities, was seen as the best compromise. 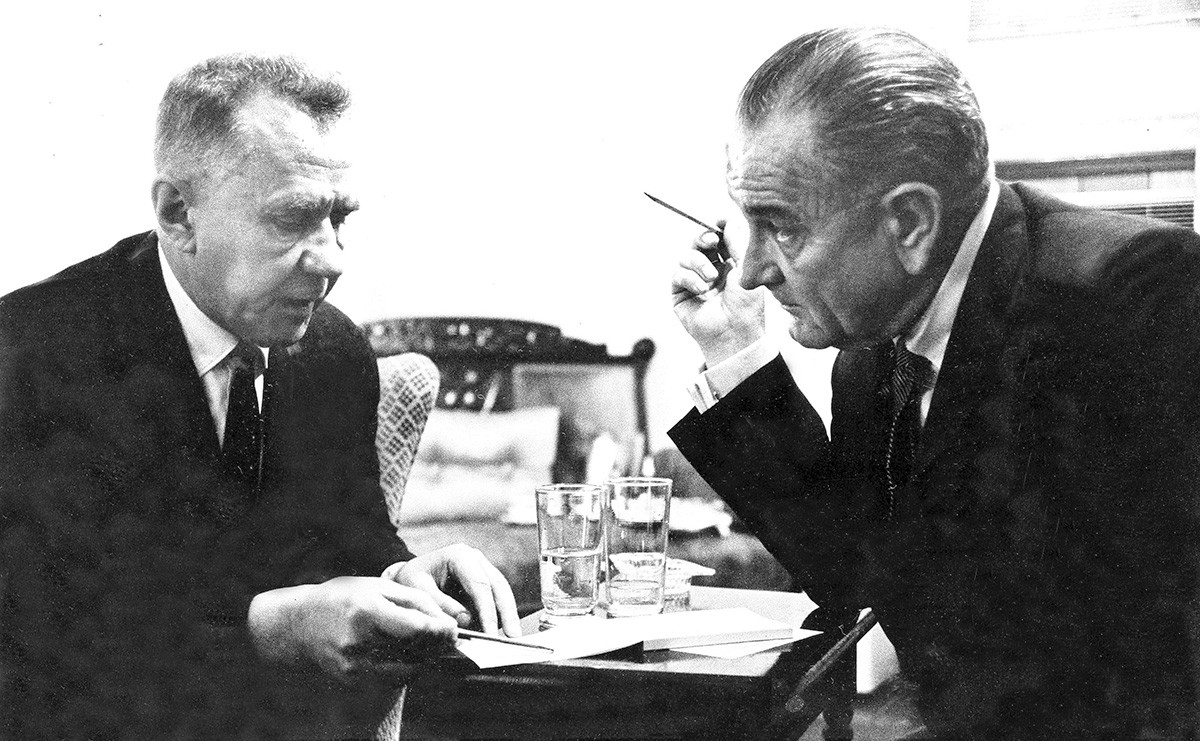 “This was the first superpower summit in an ordinary community, rather than at Camp David or the White House,” said Professor of Soviet Studies, James Heinzen, who teaches today at Rowan University, the successor to Glassboro College, which in 1967 was a public teachers’ college in a town of about 10,000 residents.

The college and the town had 16 hours to prepare for the summit and Hollybush, a 19th century mansion that was home of Glassboro College’s president, had to be modernized to host the two leaders — 12 small air conditioners were installed, as well as 16 telephones. Meanwhile, the local cinema screened the comedy ‘The Russians are Coming, the Russians are Coming!’ 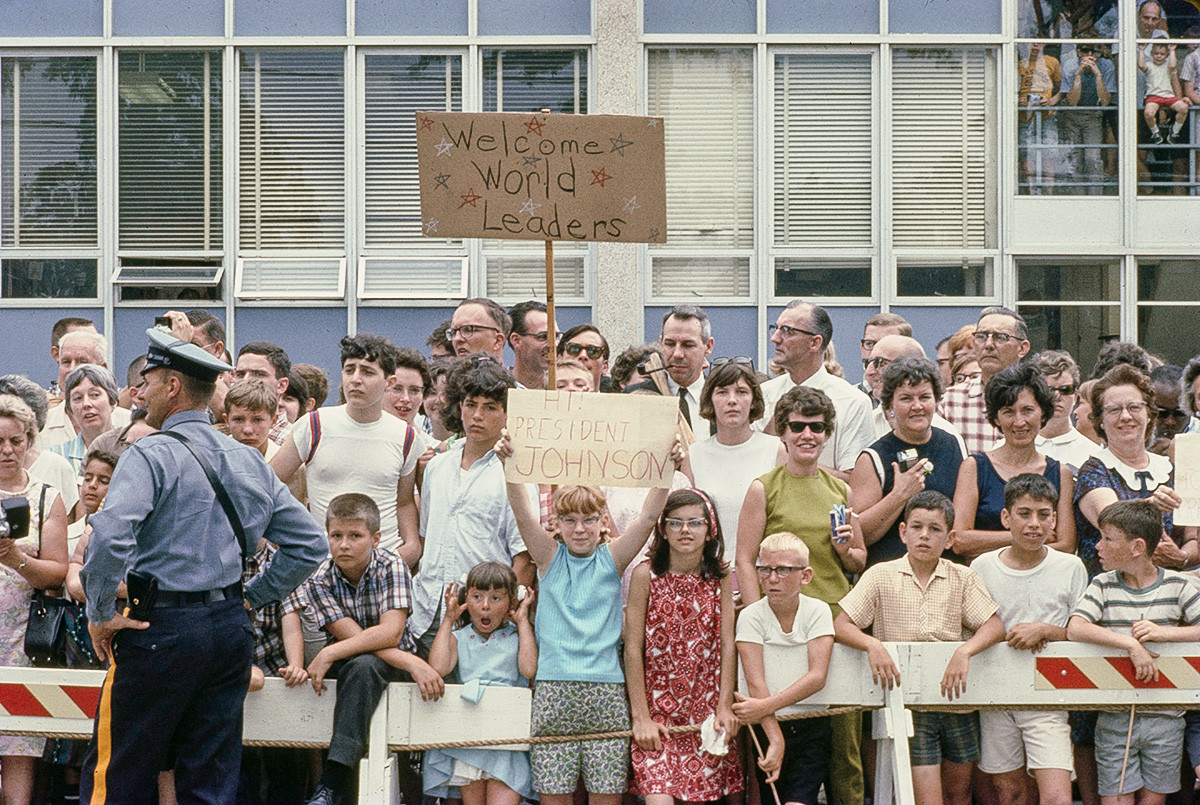 Crowds at the Glassboro Summit Conference

“Hundreds of Secret Service officers and state troopers swarmed over the campus and checked every room of every building. Snipers took up positions on every rooftop,” said Professor Heinzen. “Since the summit had been organized with only 16 hours’ notice, students and staff were taken by surprise when approached by armed men asking for identification.”

The Spirit of Glassboro

During those three days, Johnson and Kosygin met for a total of almost 10 hours in Hollybush’s small library. The topics discussed included the Arab-Israeli Six-Day War that took place just weeks before, as well as the nuclear arms race and the Vietnam War. 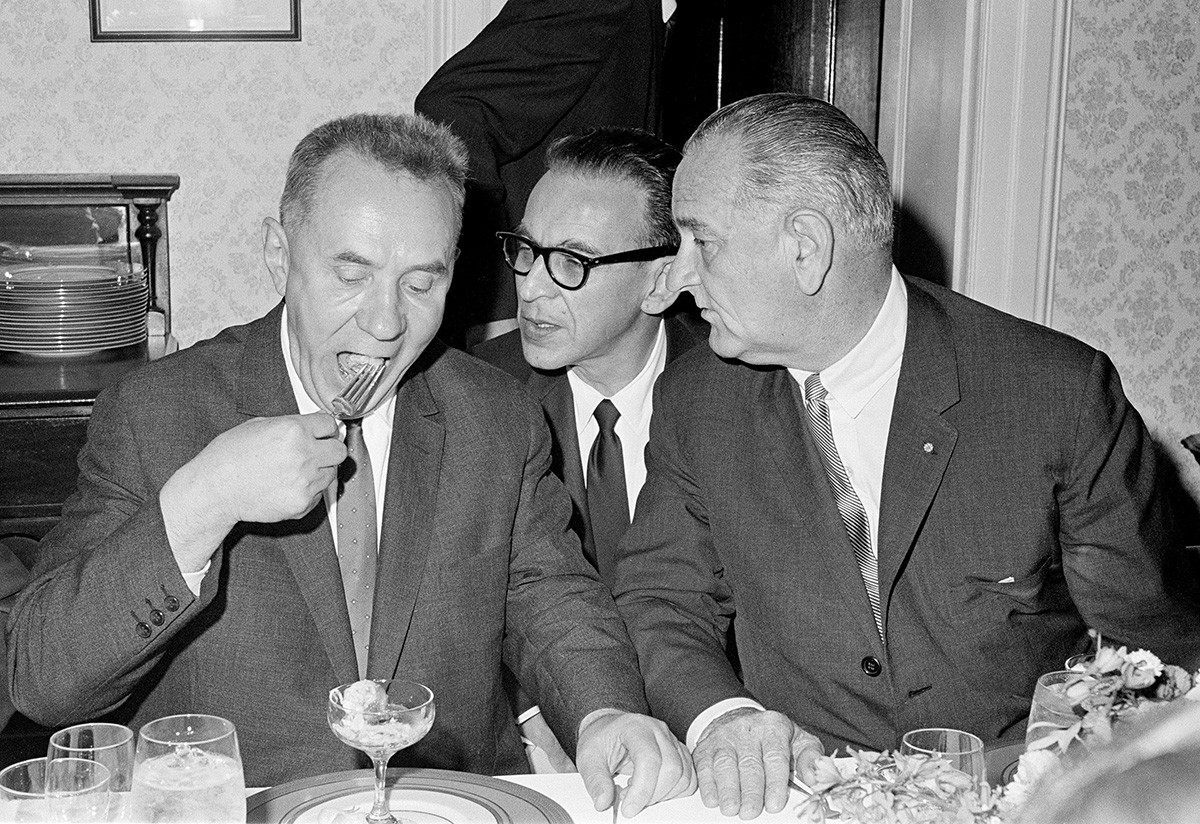 While no major agreements were signed at Glassboro, Johnson considered the summit a triumph and afterward he invoked “the Spirit of Glassboro” when referring to improved relations with Moscow.

Johnson and Kosygin gave press conferences on the steps of Hollybush mansion while thousands cheered on the street. Almost 1,000 journalists from around the world covered the summit, including Dan Rather, the then CBS White House correspondent.

“We may have differences and difficulties ahead, but I think they will be lessened, not increased, by our new knowledge of each other,” Johnson said, noting a “spirit of direct, face-to-face exchanges between leaders with very heavy responsibilities”. 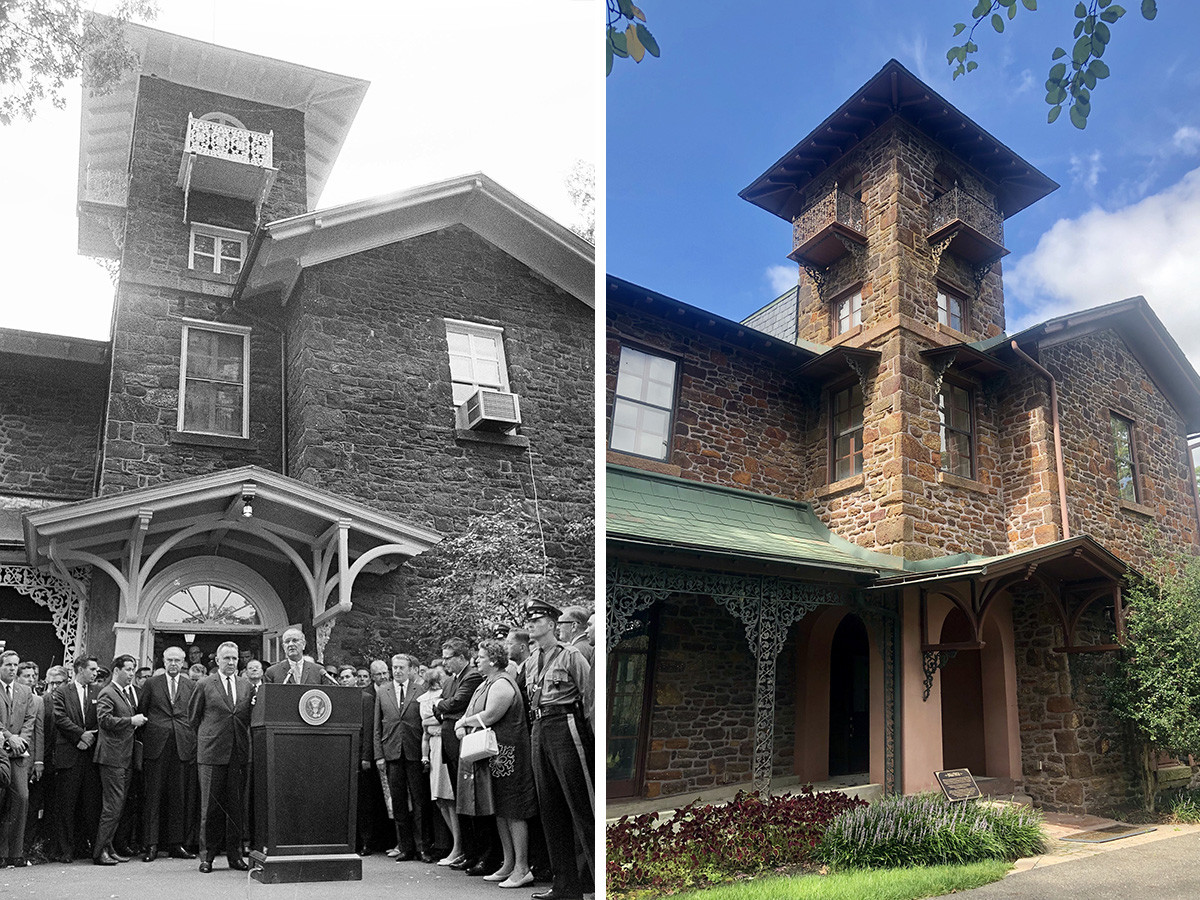 On the left: June 23, 1967, President Lyndon Johnson speaks at the podium in front of the Hollybush mansion, on the campus of Glassboro State College. On the right: This place (now called Rowan University), 2020

Johnson showed photos of his new grandchild to Kosygin, who was also a new grandparent, and he in turn showed Johnson his pride and joy.

“They bonded over these photos. Johnson was an outgoing Texan, while Kosygin was a typical Soviet stony faced apparatchik. Johnson wanted to connect personally with Kosygin with the idea that this would make their conversations about very complex issues more productive,” said Professor Heinzen.

“New agreements are not always reached in a single conversation,” Johnson told the media on June 25 as the talks ended. “We’ve gone more deeply than before into a number of the many questions before our two countries.” 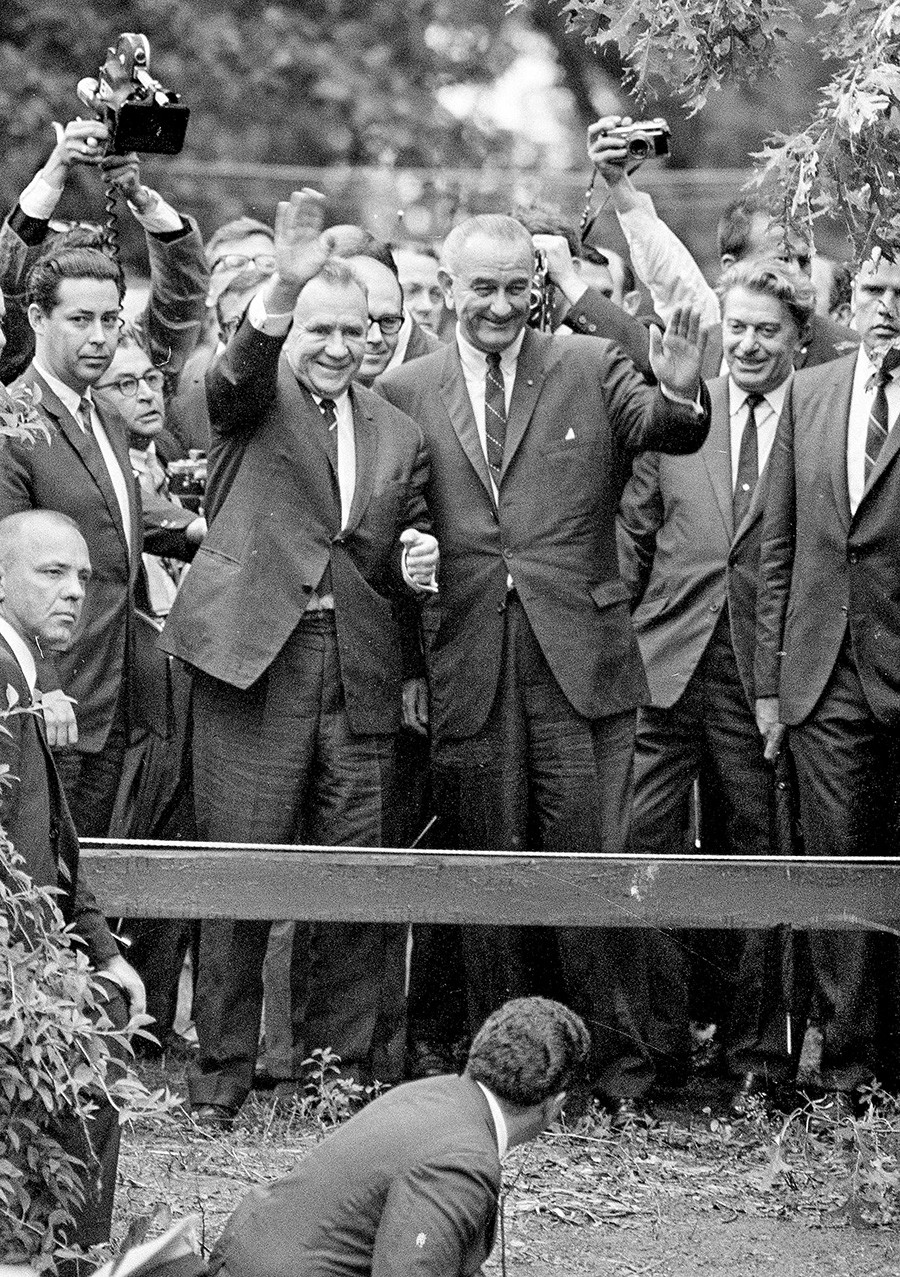 A little more than a year later, however, the Soviets invaded Czechoslovakia, thus ruining that good spirit.

Nevertheless, that spirit lived on, if even only just a flicker, and almost 20 years later, President Ronald Reagan invoked the Glassboro Summit and the “spirit of Hollybush” when remarking about his successful negotiations with Soviet leader Mikhail Gorbachev.