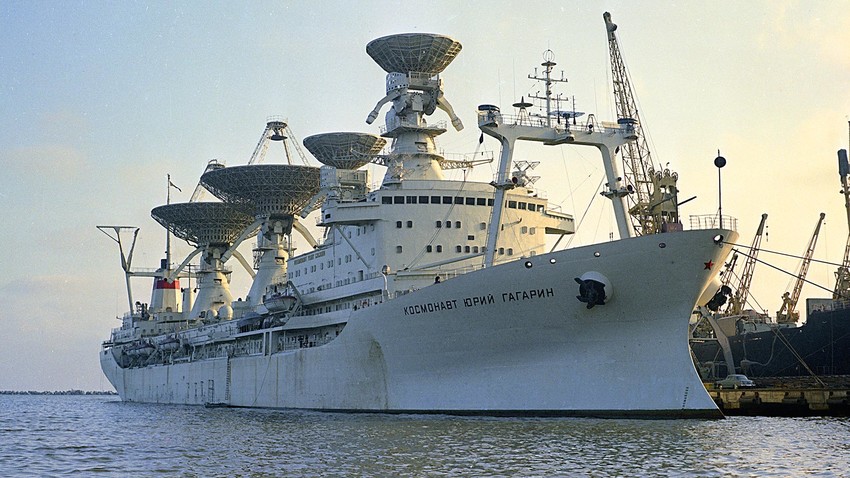 Starting from the 1950s, the Soviet Union spared no resource developing its space program. Soviet engineers launched the first ever artificial satellite, successfully put a man in space and carried out the first ever spacewalk.

Each subsequent mission was tougher than the one before. New objectives demanded creative decisions. This was especially true for the field of space flight control.

Ballistic calculations showed that spacecraft circumventing the planet along the Earth’s orbit made six of their 16 daily turns over the Atlantic Ocean. During those times, communication with Soviet-based mission control would always strongly deteriorate in quality.

Scientists then thought of a clever solution: Why not create floating mission control, capable of overseeing space flights from any point on Earth?

In 1971, the ship ‘Kosmonavt Yuriy Gagarin’ was lowered to water. 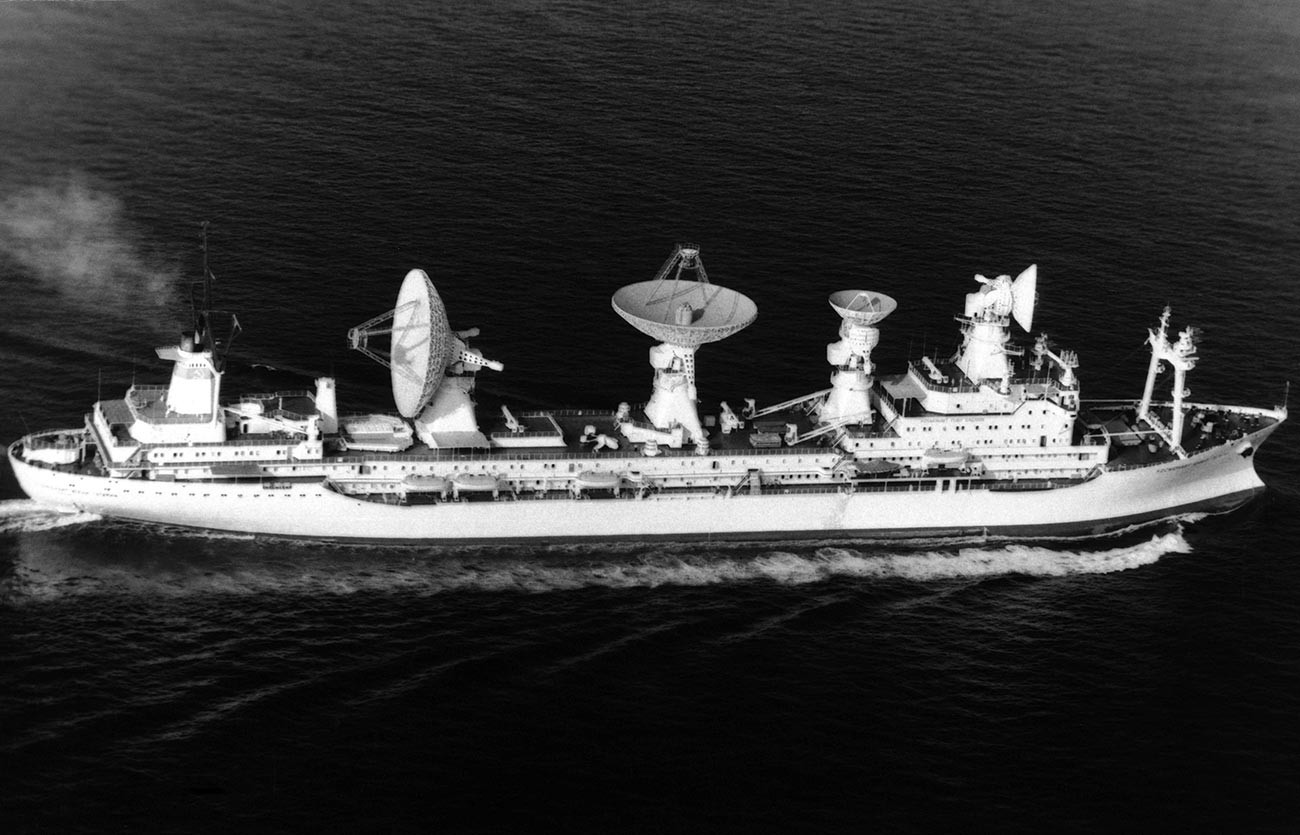 The absolutely unique vessel’s unorthodox looks are the first thing that stood out, due to the baffling number of antennae and satellite dishes. The ship carried an entire radio-technical command and measurement complex - the ‘Foton’ - for monitoring spacecraft on missions.

The equipment allowed working with up to two spacecraft simultaneously, passing along coordinates, changing trajectory and keeping contact with the cosmonauts, using telephone and telegraph. The ship was also in constant communication with the Mission Control Center in Korolev. 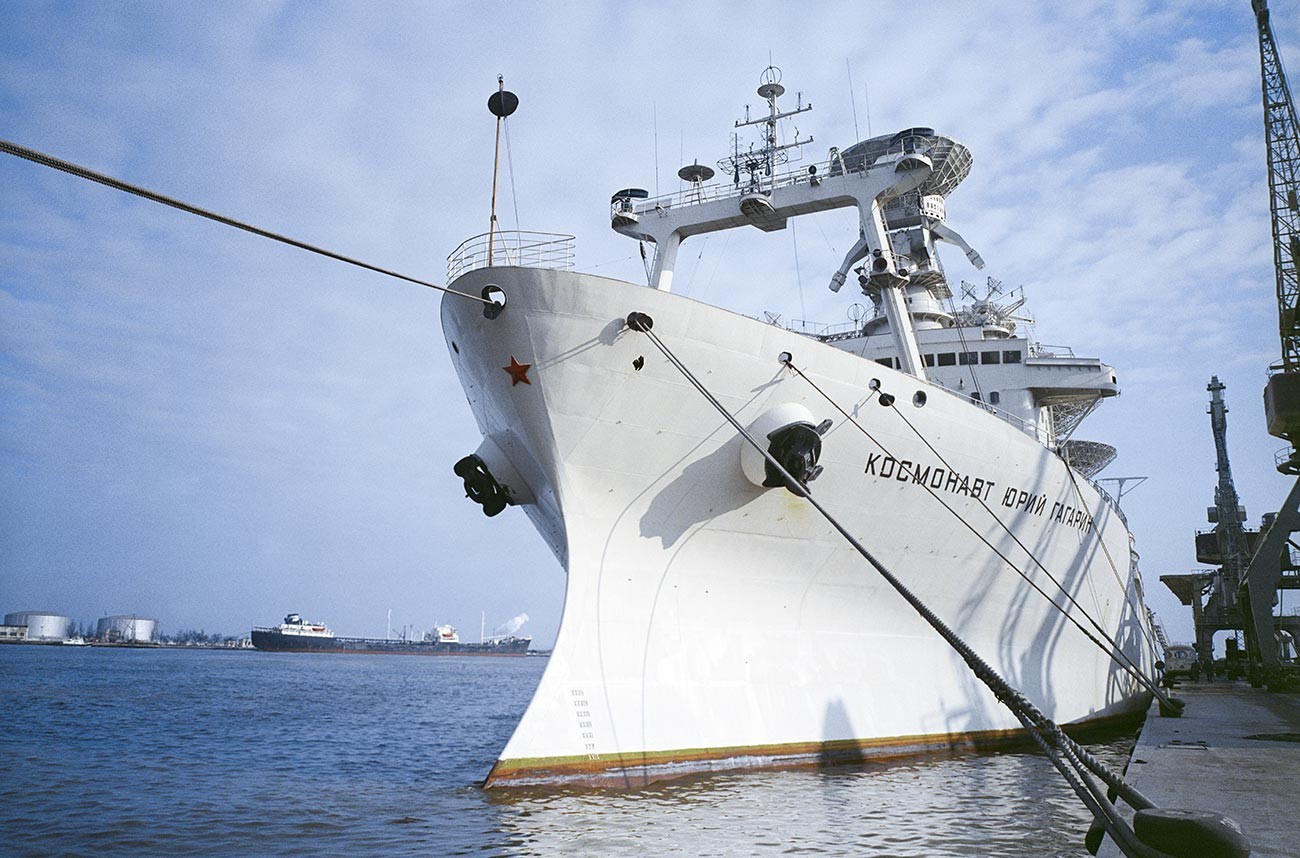 Aside from just flight control, The ‘Kosmonavt Yuriy Gagarin’ was also capable of searching for missing spacecraft and overseeing ocean-based rescue of cosmonauts.

The vessel hosted a total of 75 antennae and satellite dishes of varying size and purpose. But of all those, the gaze is always drawn to the four biggest ones. Two of them, installed at the nose of the bridge, used to be 12 meters in diameter and weighed 180 tons each. The other two were even bigger and more powerful, with each measuring 25 meters in diameter and weighing in at a staggering 240 tons each. 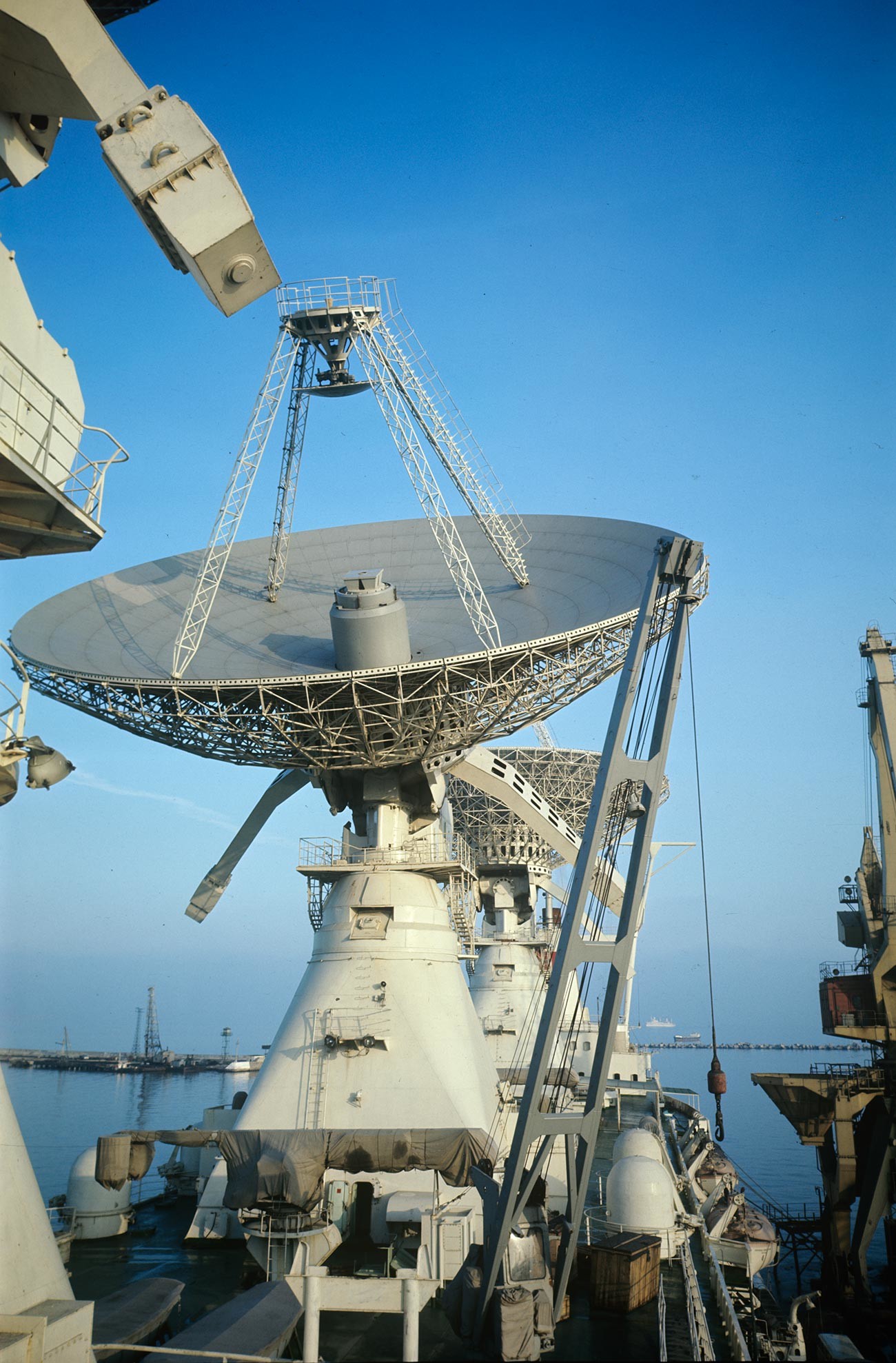 The huge quantity and specific location of the antennae created certain problems to do with the ship’s navigational capacity and required unique and constructive solutions.

The biggest issue was in ensuring the ship’s stability, its capacity to withstand external forces and the ability to return to a state of equilibrium once these forces subside. 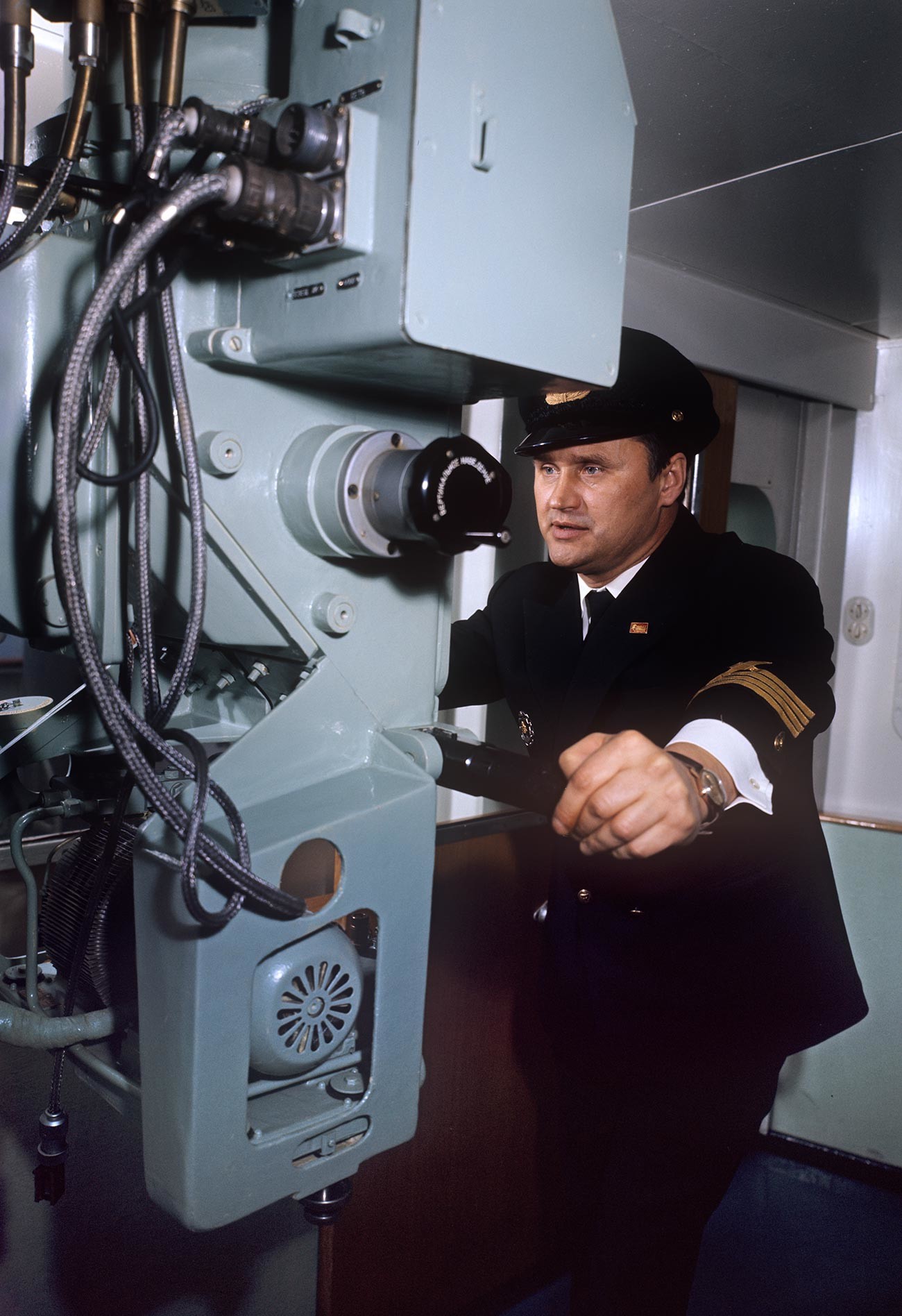 Gigantic satellite dishes, with their electrical supports and foundations, didn’t just weigh tons - they all had to be placed at the least convenient spots for ensuring safe and stable navigation. The heaviest elements towered high over the deck, while by comparison, the very light electrical and navigational equipment was all located below deck. 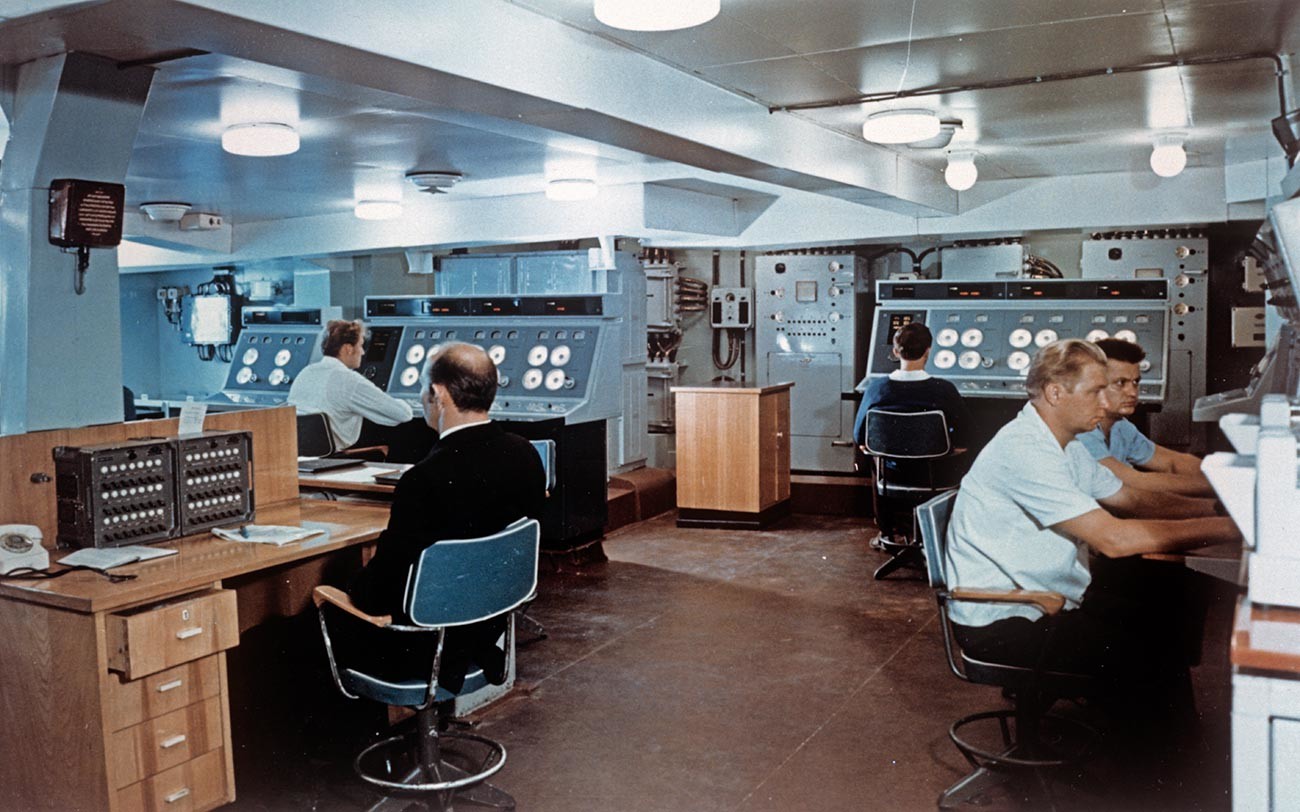 An additional problem was the sailing quality, added by the sheer size of the satellite dishes, whenever they needed to be turned on their side when connection was being established. To avoid the risk of breakage - or the ship simply capsizing, communication sessions were never performed during strong winds.

Gyroscopic instruments aboard the ship would report its location and any side and keel toss down to just a few arcminutes.

Whenever the ship was busy communicating with spacecraft, it could not choose a course and had to stick to a set trajectory. This led to the need for improving the ship’s maneuverability even in favorable weather conditions and at lower speeds.

In order to solve that task, special internal steering devices were installed in the form of two winged movers in the nose and at the aft. Such a construction eased steering at lower speeds, during drifts and docking by compensating for the strength of the tide during communication.

The tasks set before a floating space mission control center presuppose a high degree of autonomy, given the vessel’s near constant location out at sea, away from fuel and provisions. Fuel reserves directly affected the range of uninterrupted travel: this was a crucial factor for specific tasks that could only be performed in certain locations, often hundreds of miles away from the closest port. 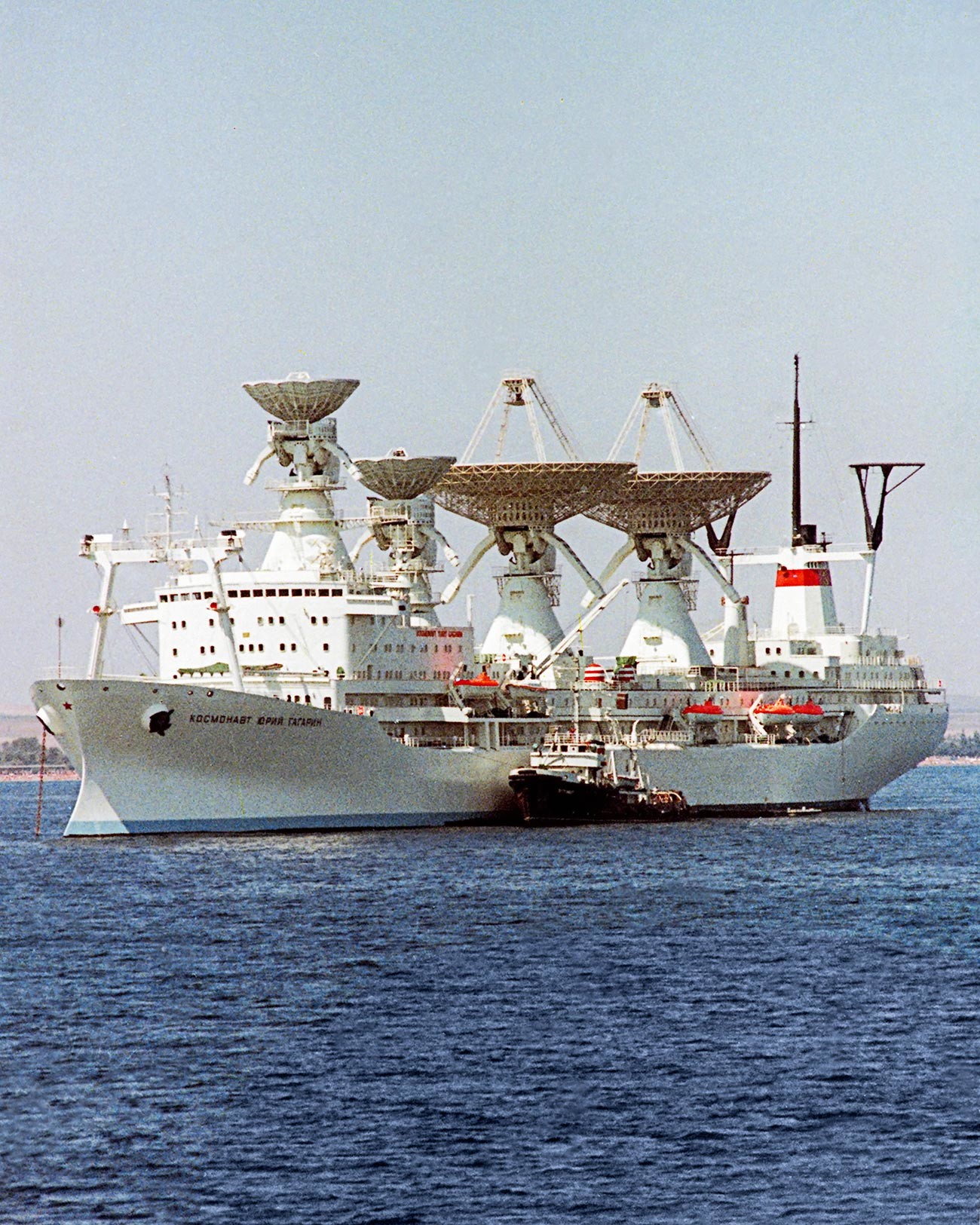 Despite its unique characteristics, the famed ship met a sad end. After the breakup of the Soviet Union, the vessel - previously registered in Odessa, passed over into the hands of the now-independent Ukraine and its Ministry of Defense.

The ship’s new owners did not harbor Russian-sized space ambitions and had no spacecraft or cosmodrome of their own. The Gagarin, as a result, stood idle. In 1996, Ukraine sold the ship to Austrian company Zuid Merkur for $170,000 per ton.

Click here to read about the 3 tragic disasters of the Soviet space program.