How a Stalin project became known as ‘Dead Road’ 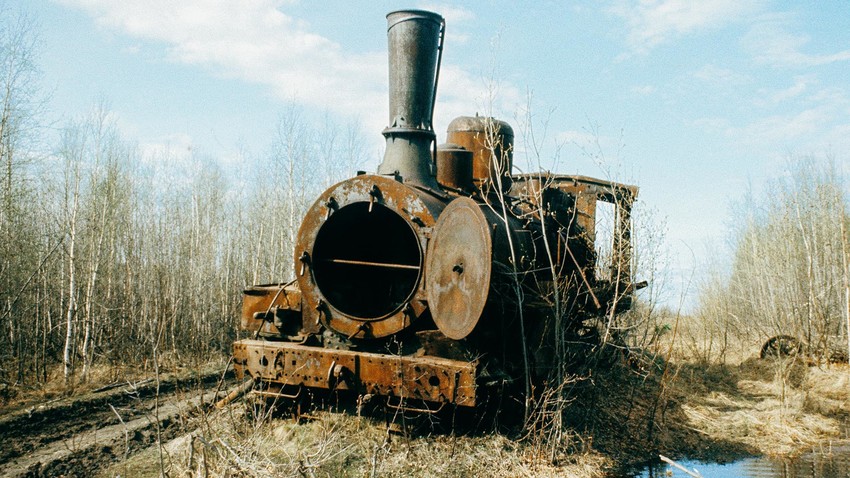 Vitaly Ivanov/Global Look Press
During the Stalin era, the vast stretches of Russia’s Zapolyayre (Eng.: arctic) were to become the site of a new gigantic railroad. However, the ill-fated construction was immediately abandoned after the Soviet leader’s death.

The endless grit of the mighty North has always excited humanity, which knew it could not possess it, but tried its utmost to at least tame it. However, there was nothing simple about accomplishing that, either. A great many projects were drawn up in the days of the Russian Empire, as well as the USSR, but the vast majority of them stayed on paper. 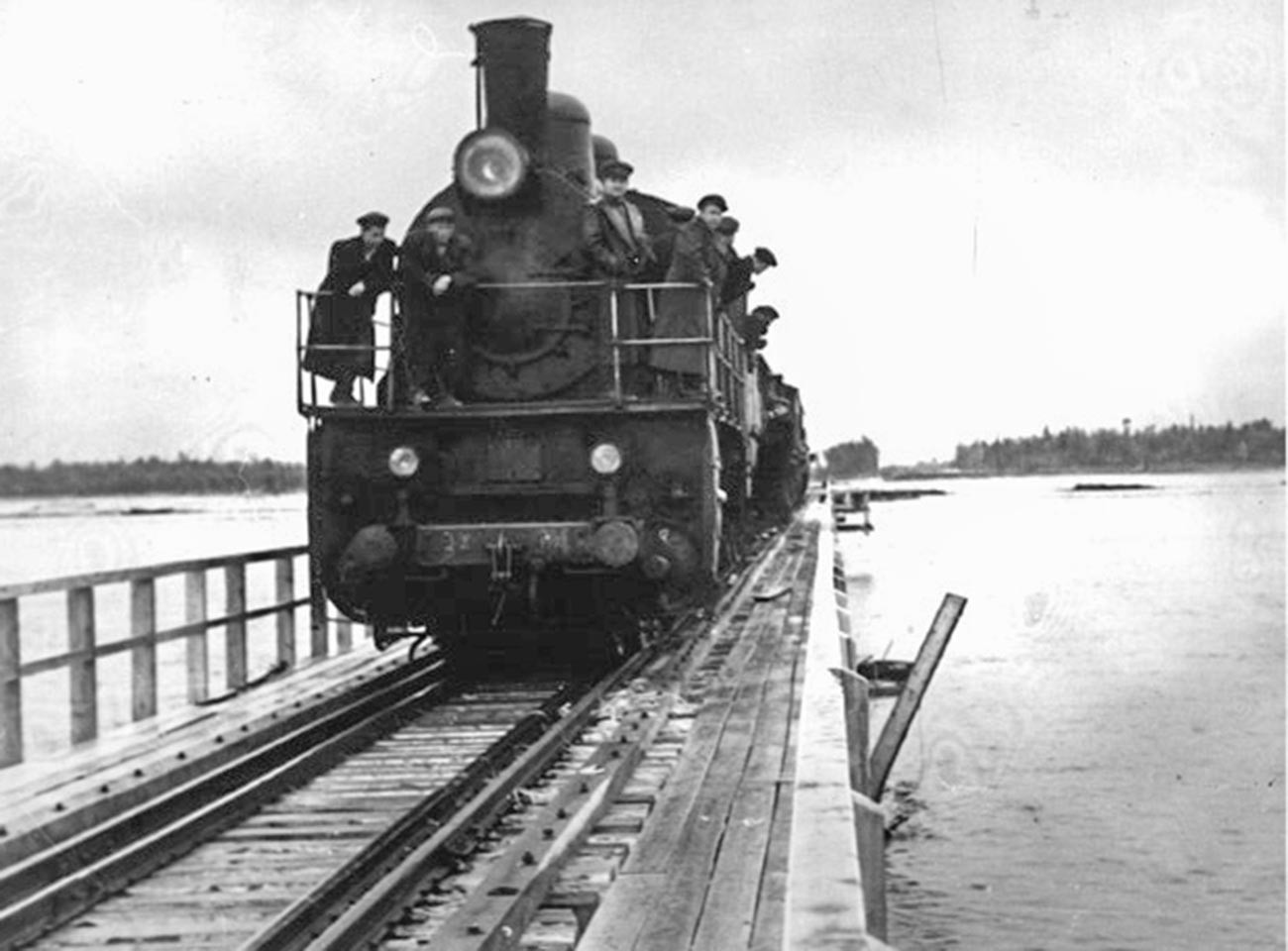 The Great Patriotic War was a big indicator for the Soviets that the country lacked defences in the Zapolyarye. The conflict revealed that the USSR’s main northern port, Murmansk, was dangerously within reach of the enemy and could easily be attacked or even captured. Joseph Stalin saw the need for a new port that would be situated further from Russia’s land borders. The next step was constructing a railroad to get there. That is how the idea for the Transpolar Mainline was born.

The initial plan was to chart a route through Cape Kamenny on the Yamal archipelago. In 1947, work had begun, with GULAG inmates as the labor force. One part was tasked with building a port, while the other was ordered to build the railroad, which would begin from the Pechorskaya highway. More than 700 kilometers of railroad had to be constructed. 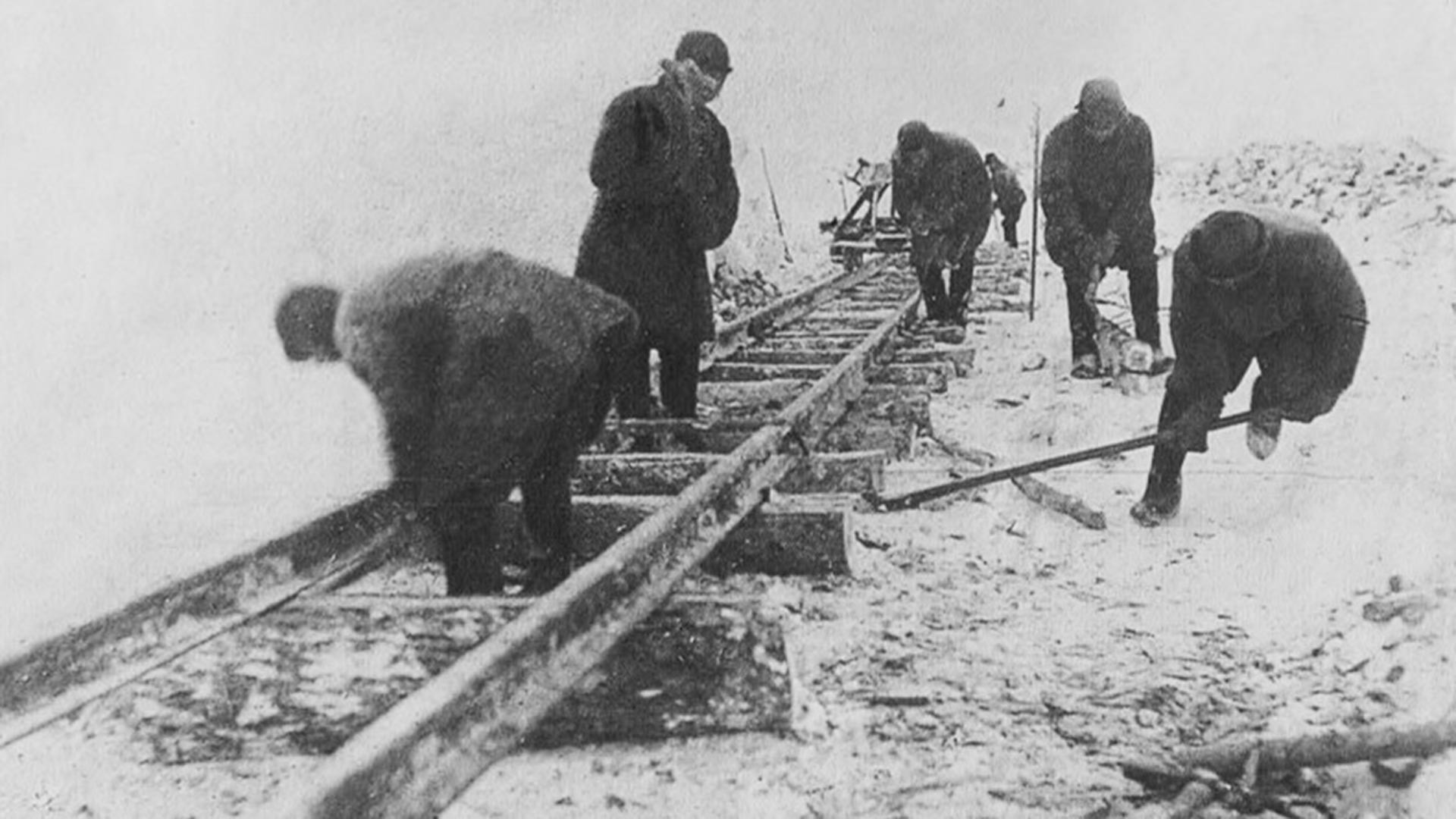 But the project was not well thought out. In a year, it became clear that the waters around Cape Kamenny are too shallow for larger ships, so a port was out of the question. The railroad had by then made it to Labytnangi station, on the shores of the Ob River. Work there had come to a standstill, as well. It turned out that the swampy tundra was no place to build any kind of infrastructure. And so, construction No. 501 wrapped. 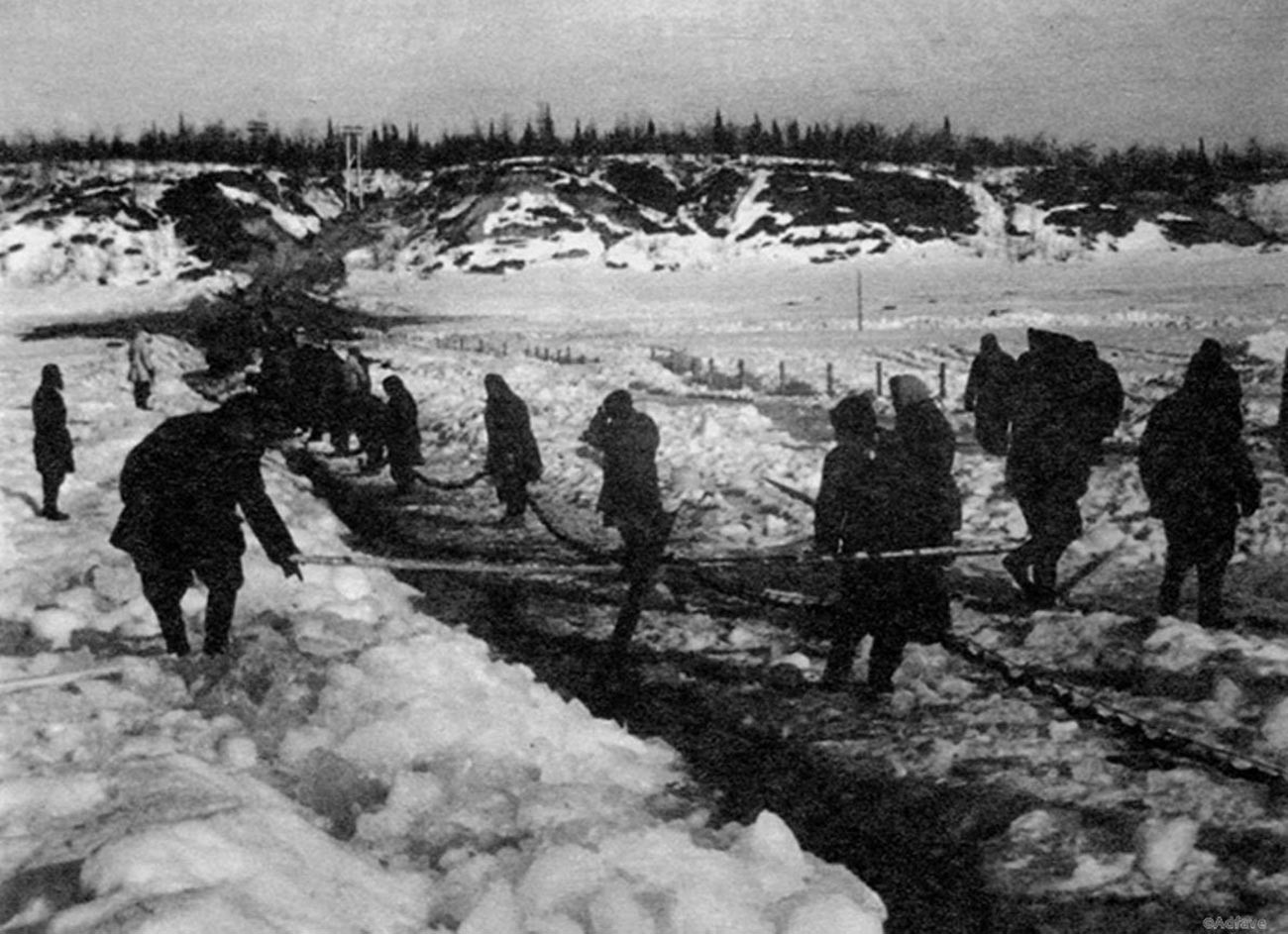 But the Soviet government wasn’t about to give up. Stalin decided that the new port could be moved to the east, so a decision was made to lay tracks from Igarka to Salekhard, a distance of about 1,260 kilometers, including ferry journeys across the Ob and Enisey. That is how constructions No. 502 and 503 began.

Not thanks to - but in spite of

Work had once again begun. And since everything had had to be done “yesterday”, there again wasn’t enough time to fully survey the land. Prisoners were once more picked for the job. The exact figure is unknown, but various sources put their numbers anywhere between 80,000 and 100,000 people. 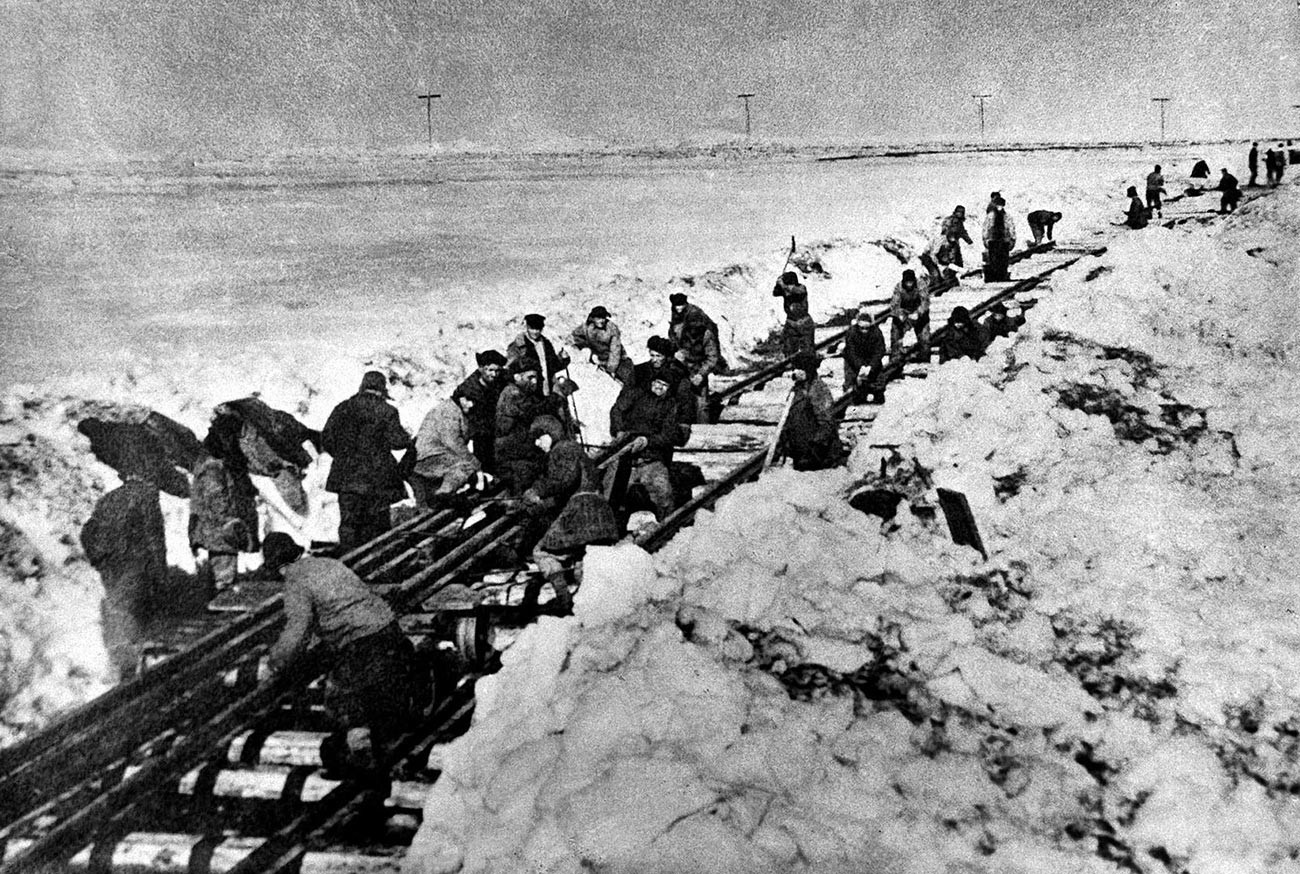 The prisoners were the hardest hit by the ill-fated project. They erected camps several kilometers apart from each other and lived in tarpaulin tents or dugouts. And only once wooden barracks were constructed and the territory fenced off could the workers relocate.

The lion’s share of the work was performed manually. Digging was the toughest task. Prisoners had to dry swamps without using any special equipment. Since the soil was unsuitable for any kind of construction, things would often collapse, with work having to be restarted from scratch.

Just as there’s no information on the number of workers hired to complete the “construction of the century”, there’s no information on deaths, either - no one had bothered to count. Bodies were either dumped into the swamps or buried in mass graves. Posts with planks nailed to them still stand today to mark the graves - not only of the workers, but everyone associated with the project. Everyone lived under equal conditions and all were unprepared for what the North had in store for them - where every day was a battle for survival. 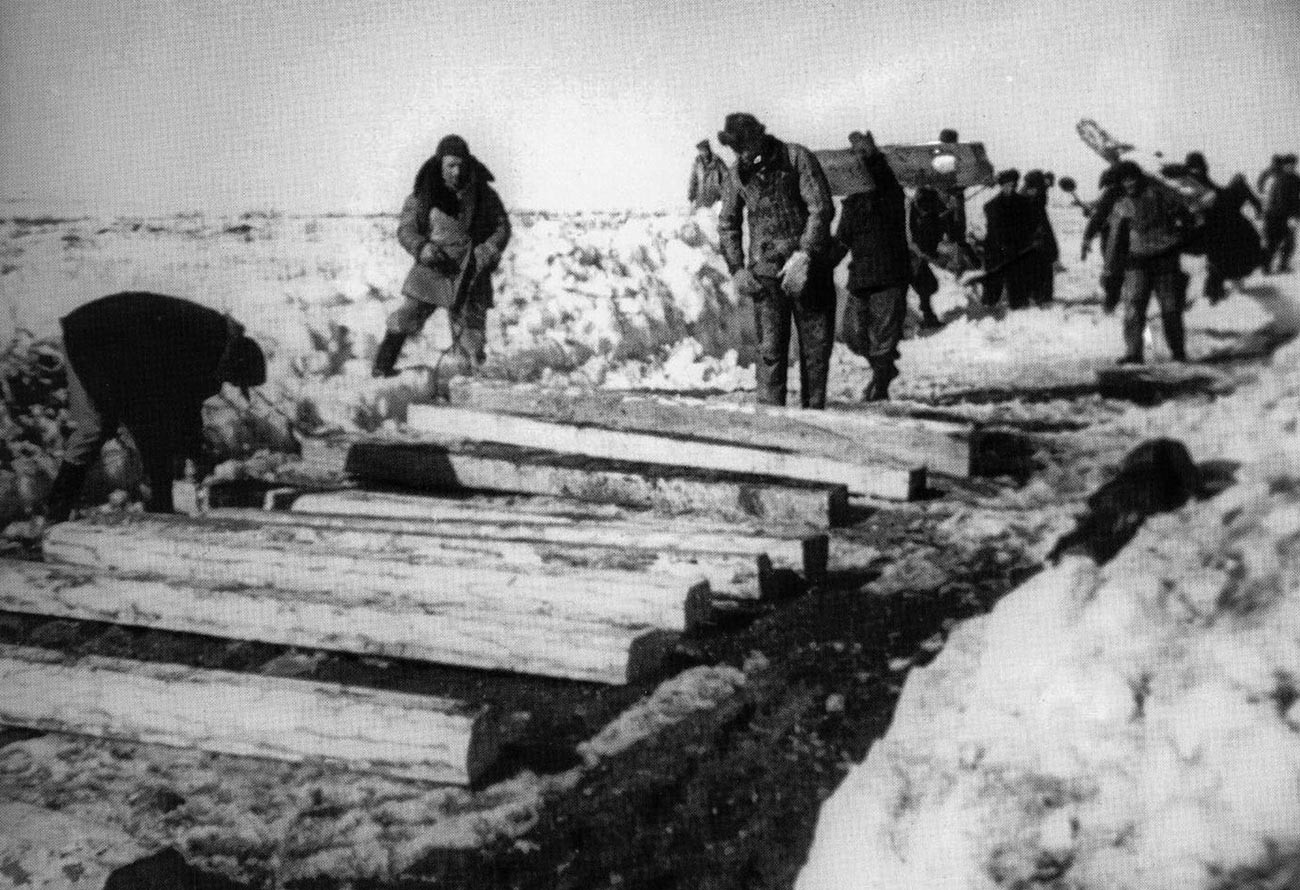 Former director of the museum in Salekhard Lyudmila Lipatova dedicated many years to studying the history of the railroad’s construction and the fate of its builders. One story talks of a woman who was a simple bookkeeper in the Ukrainian SSR. One night, rats burrowed into the safe and ate a part of the money. The woman was accused of theft and sent to the GULAG to work on the Transpolar Mainline.

Lipatova found out that many of the laborers were ordinary people who were tried on political grounds.

Despite the numerous hardships, construction went on. People adapted to the deadly frosts during the winter and hordes of mosquitoes during the summer. 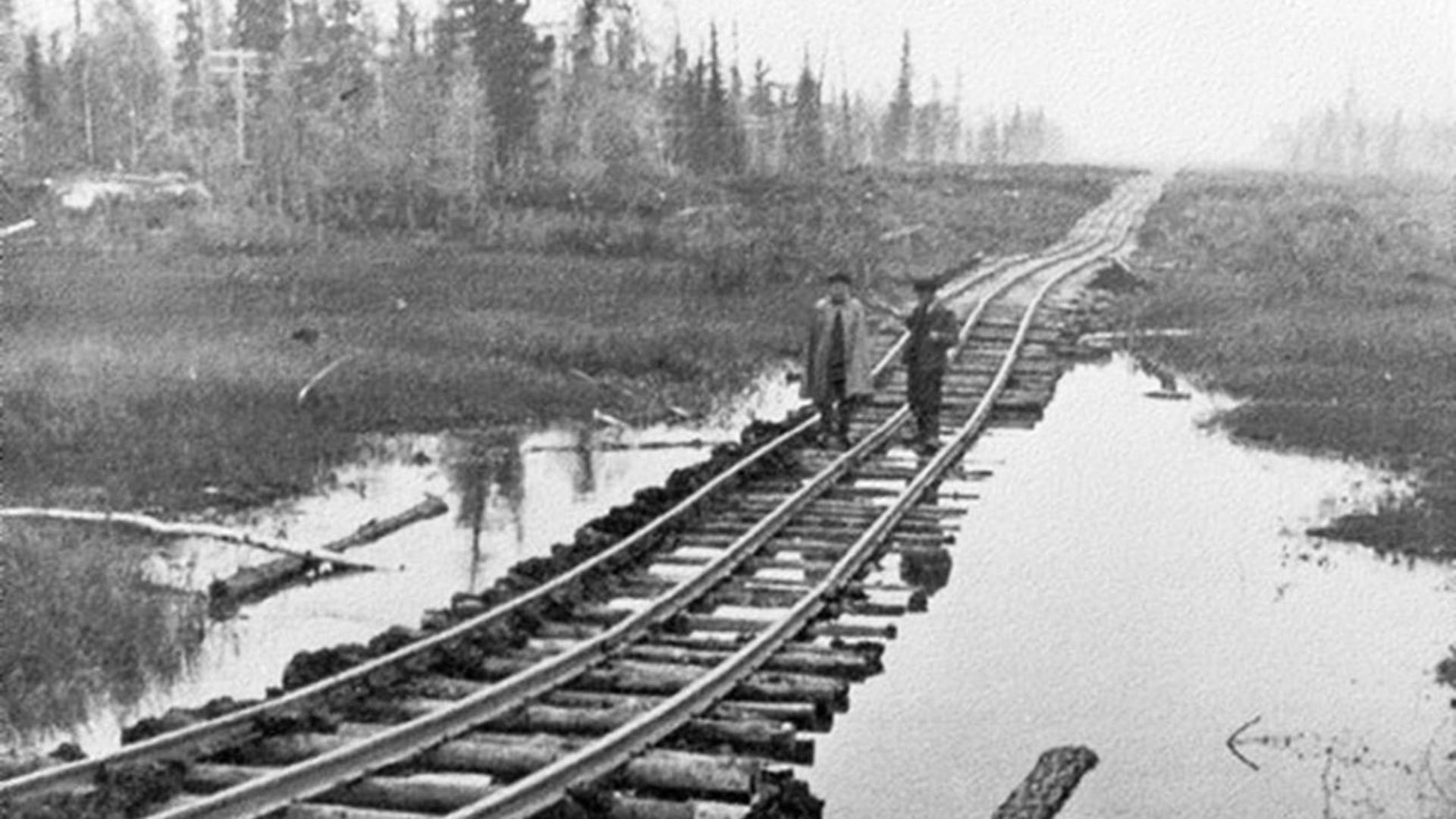 The terrain was incredibly inhospitable for construction

A wide variety of rails and sleepers from across the USSR were transported to the works - both new and old ones, dating back to the Russian Empire. There was the odd foreign-made rail, having ended up in Russia after World War I. And although the GULAG held no shortage of free manpower for the digs, there was still a catastrophic shortage of specialists and equipment. This would frequently lead to old tanks being used in place of non-existent tractors. They were converted by removing the turrets. The “specialists” to operate the machines were again taken from prisoner ranks.

The quality of the work left a lot to be desired. For instance, some parts had rails and sleepers attached together without using linings, while others had connecting pads made of wood. The railroad was already coming out lousy even before construction could finish. 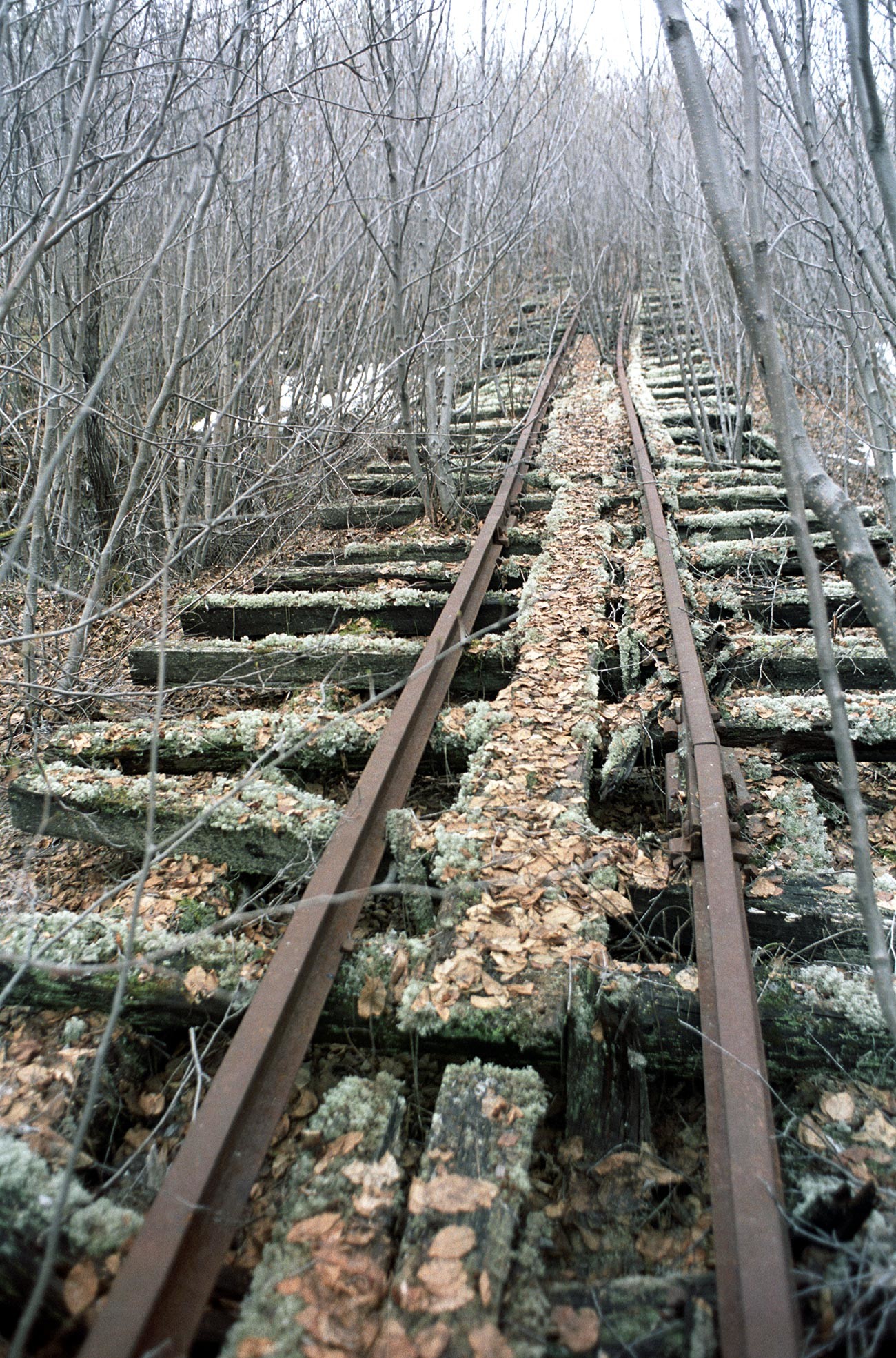 What remains of the 'Dead Road'

Somehow, by spring of 1953, several hundred kilometers of track had been laid under Novy Urengoy. It was even operational for a while, albeit with trains having to crawl through some sections at 10 km/h.

Since the whole project was being realized spontaneously, so was the financing: It was being calculated according to need, with no prior budgets approved. The official version holds that the construction bill was 1.8 billion rubles. Despite being a large sum, the Baikal-Amur highway actually cost the government almost 10 times as much. A 1991 tally suggested that it stood at 17.7 billion. 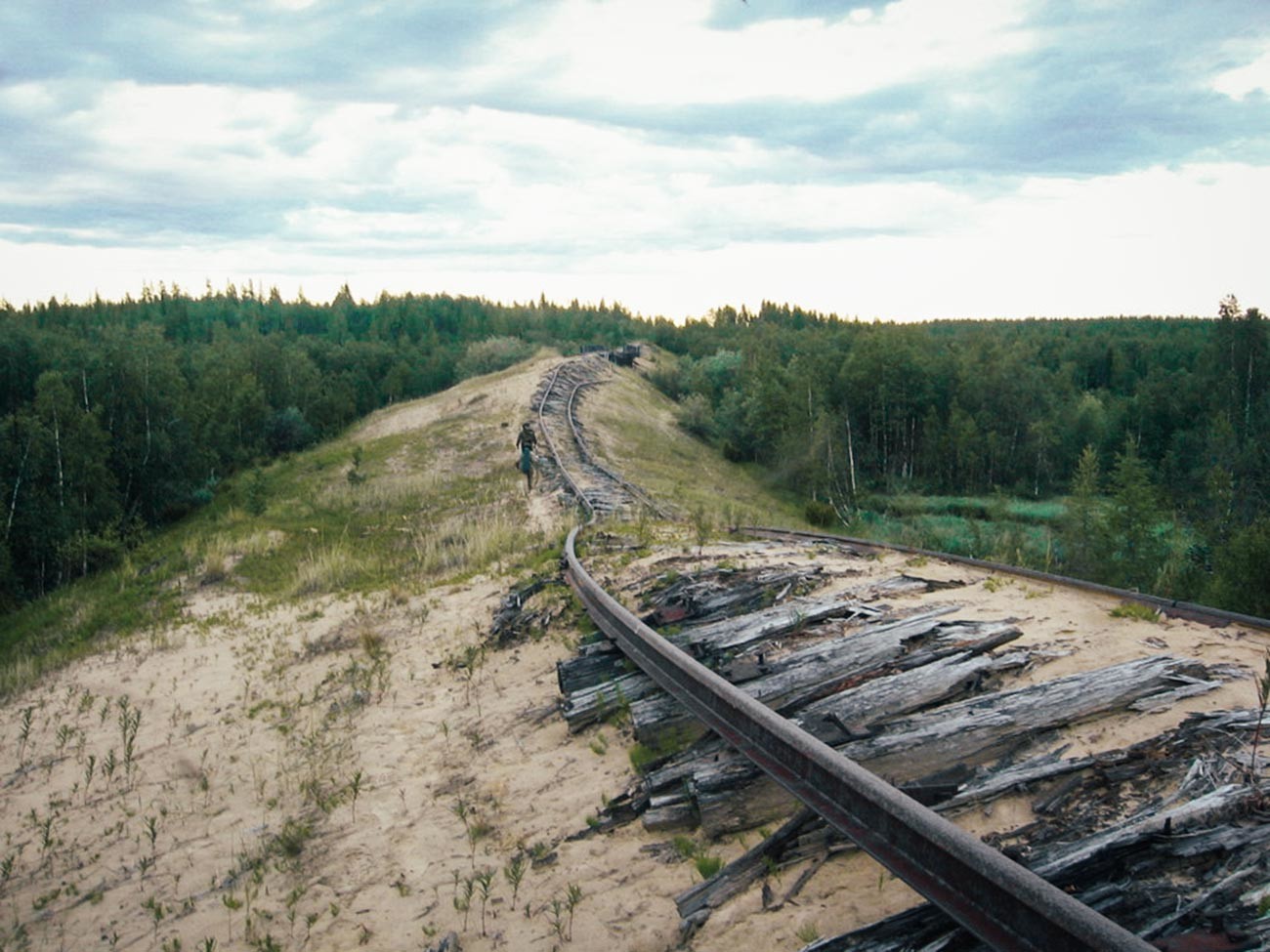 The remains of the Transpolar Mainline, 2004, Salekhard - Nadym

In spring of 1953, construction ceased abruptly. Stalin had died and the Council of Ministers of the USSR ruled to end all work on the railroad. Then Lavrentiy Beria, who became Minister of Internal Affairs and State Security, declared amnesty. A part of the workers were freed as part of some one million prisoners under the ruling. Parts of the railroad then started to be taken apart. The bigger part, however, was left untouched. Silence fell over the places that witnessed tireless work only the previous day.

It transpired that, for six long years, an untold number of people had been toiling away for nothing. All that was left of the massive and expensive project was a small section of the railroad between Chum and Labytnagi, approved by the Ministry of Railways. Meanwhile, the Ministry of Communications got a phone line out of it. Everything else, however, was discarded and abandoned. The railroad became an open-air museum. 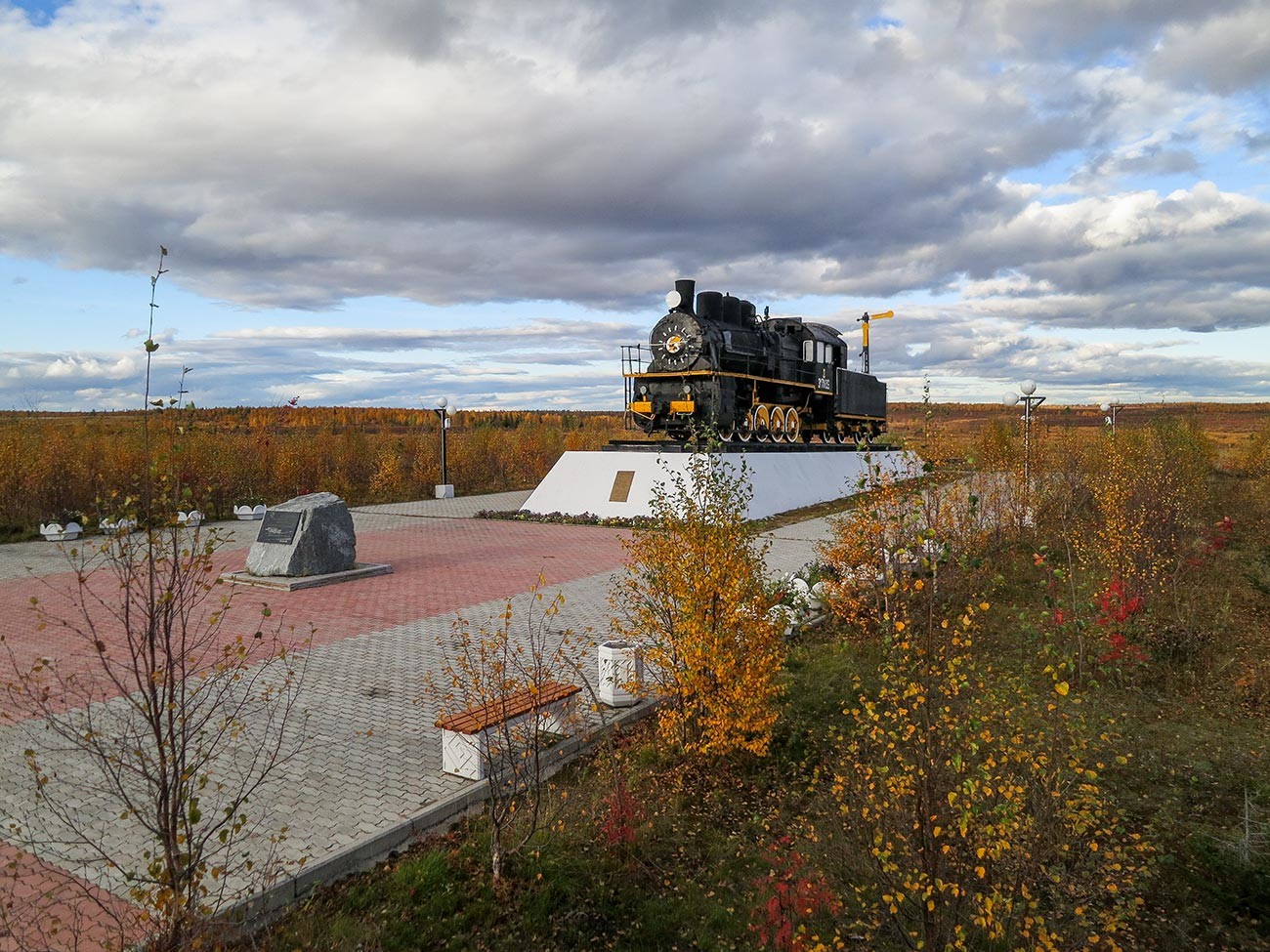 Memorial to builders of 501 Railroad

Later, after the project was scrapped, opinions started to emerge that the true motivation behind the project wasn’t to create a path to the port. Some researchers believed that Stalin sought to connect as much of the country as possible by railroad. Others were certain that he wanted to connect all of the nickel mines in the north to factories in the west. Whatever his reasoning, Stalin’s dream was not to be. The ground eventually sagged, the rails rusted and the ruts filled up with shrubs and trees. Soviet folk forever remembered the project as ‘Dead Road’ or ‘Stalinbahn’.