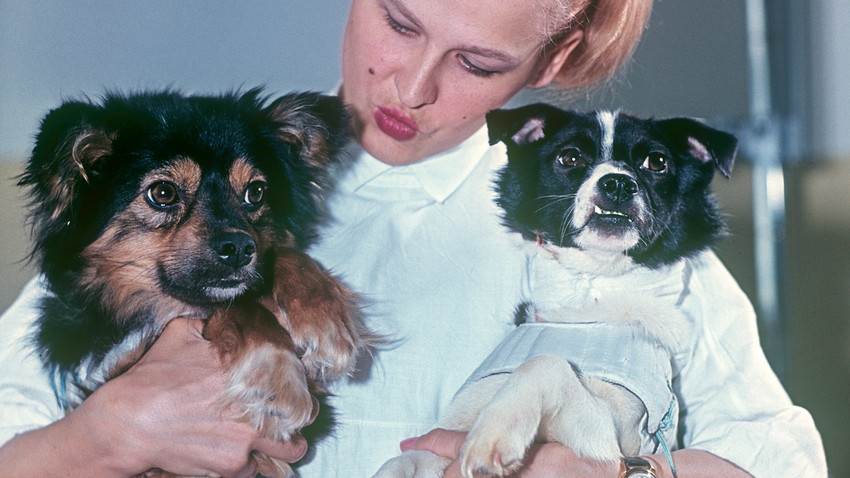 Lev Polikashin/Sputnik
It was a complex experiment in which the two dogs, Veterok and Ugolyok, thrice remained practically immobilized for nearly two months. However, they became national heroes.

One might wonder why dogs continued to be launched into space even after the first manned flight took place. At one banquet, Yuri Gagarin famously joked: “I still don’t understand whether I am the first man or the last dog [in space].” However, the Soviet Union continued to launch dogs into space even after Gagarin’s flight. On February 22, 1965, the Kosmos-100 biosatellite was launched into orbit with the dogs named Veterok and Ugolyok on board. 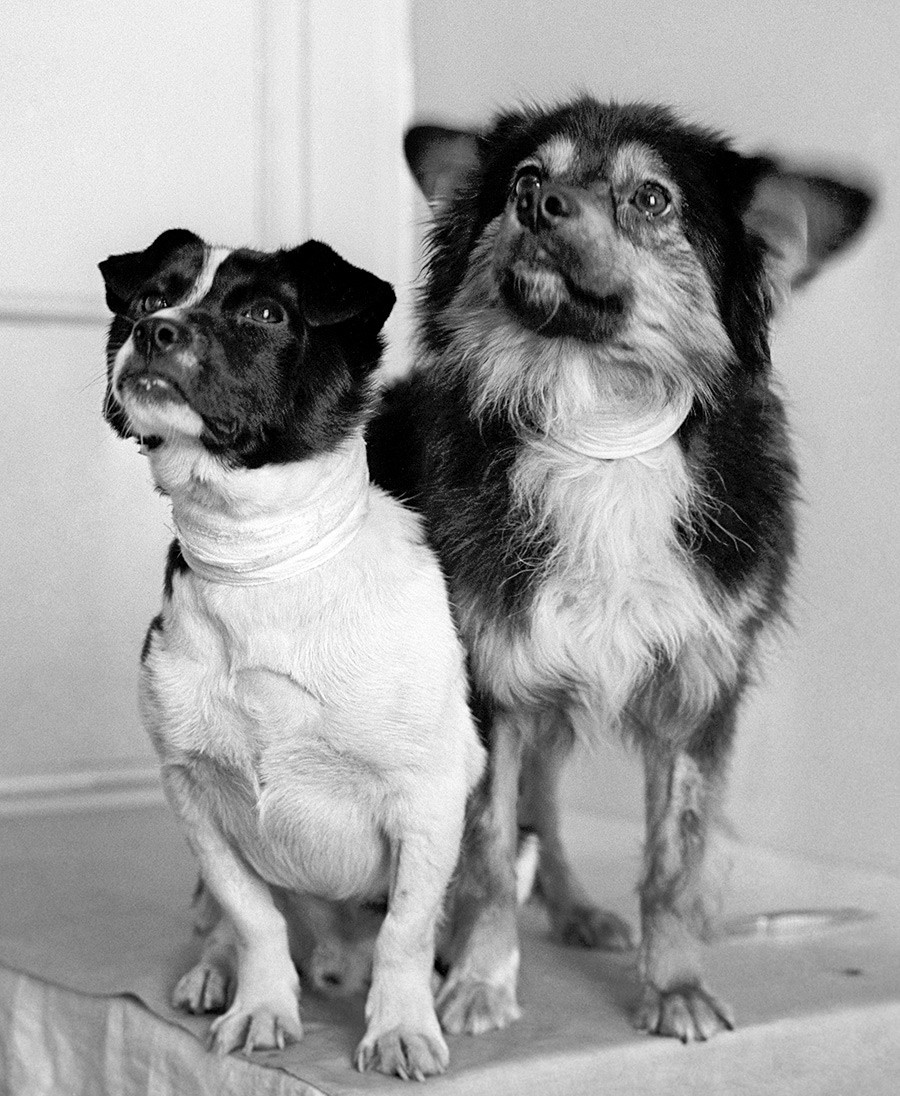 Those two dogs were perhaps the most heroic canines in the history of space exploration. They spent 22 days in space, an absolute record for both dogs and humans. It was only beaten five years later, when the cosmonauts of the Soyuz-11 mission spent two hours more in orbit. However, the two dogs paid a heavy price for their achievement.

Five days. That was the maximum duration of manned flights until 1965. Humankind had developed technical capability for putting humans into space, but could not be sure that they could spend there longer without doing long-term damage to their health.

Nevertheless, it was planned that soon space flights were to become longer, so it was necessary to assess the effect that weightlessness and increased radiation had on the human body. As usual, it was decided that the tests would be made, yet again, on dogs. 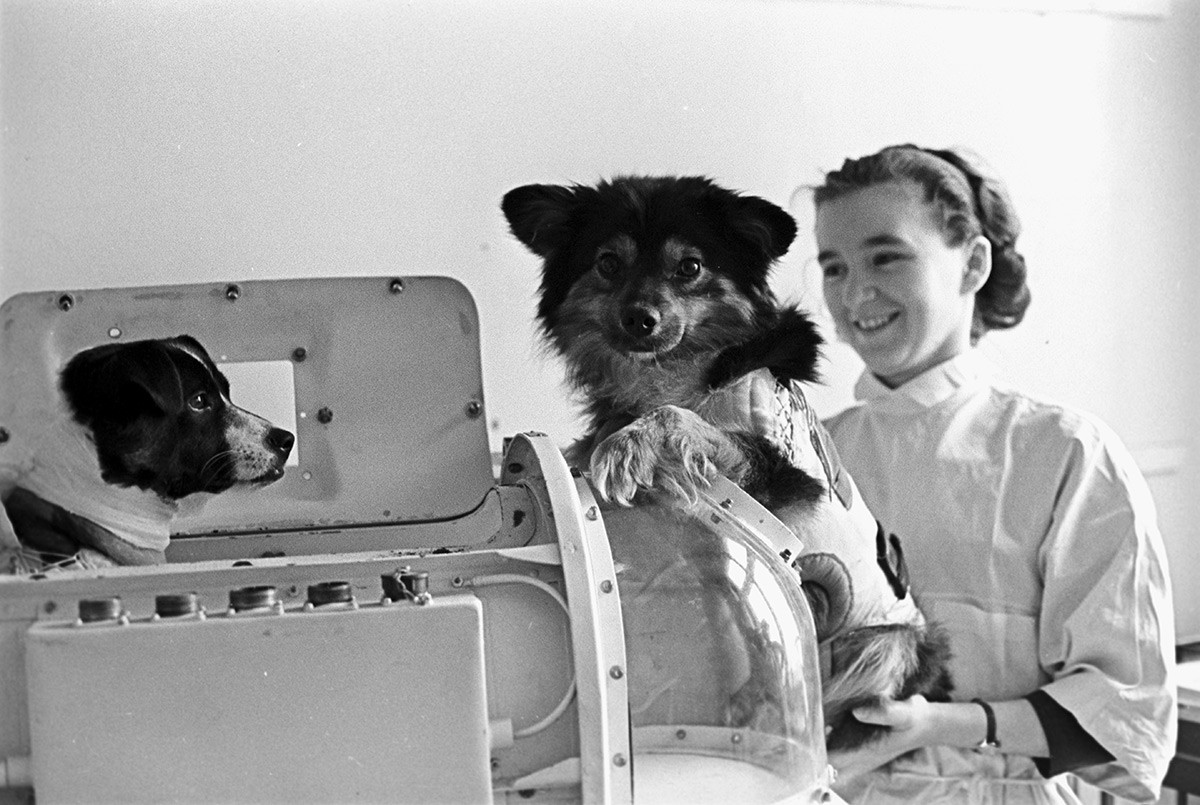 Veterok and Ugolyok were two of over 100 mongrels selected for the experiment. The primary criteria were very specific. Dogs were picked up from the streets because mongrels were considered hardier and smarter than thoroughbreds. Furthermore, successful candidates could not weigh more than 6 kg and be more than 35 cm tall. In addition, there was one more criterion that had to do with presentation – the dogs had to be white since that color looked better on film. Having been through a tough selection, the dogs were then to pass a real survivability test.

Their tails had to be docked

To undertake a space mission the dogs had to be prepared, first of all physically. One of the main tasks that needed solving was how dogs locked in a capsule for a long time were to eat, relieve themselves and move. It was decided that the dogs would have to undergo an operation. 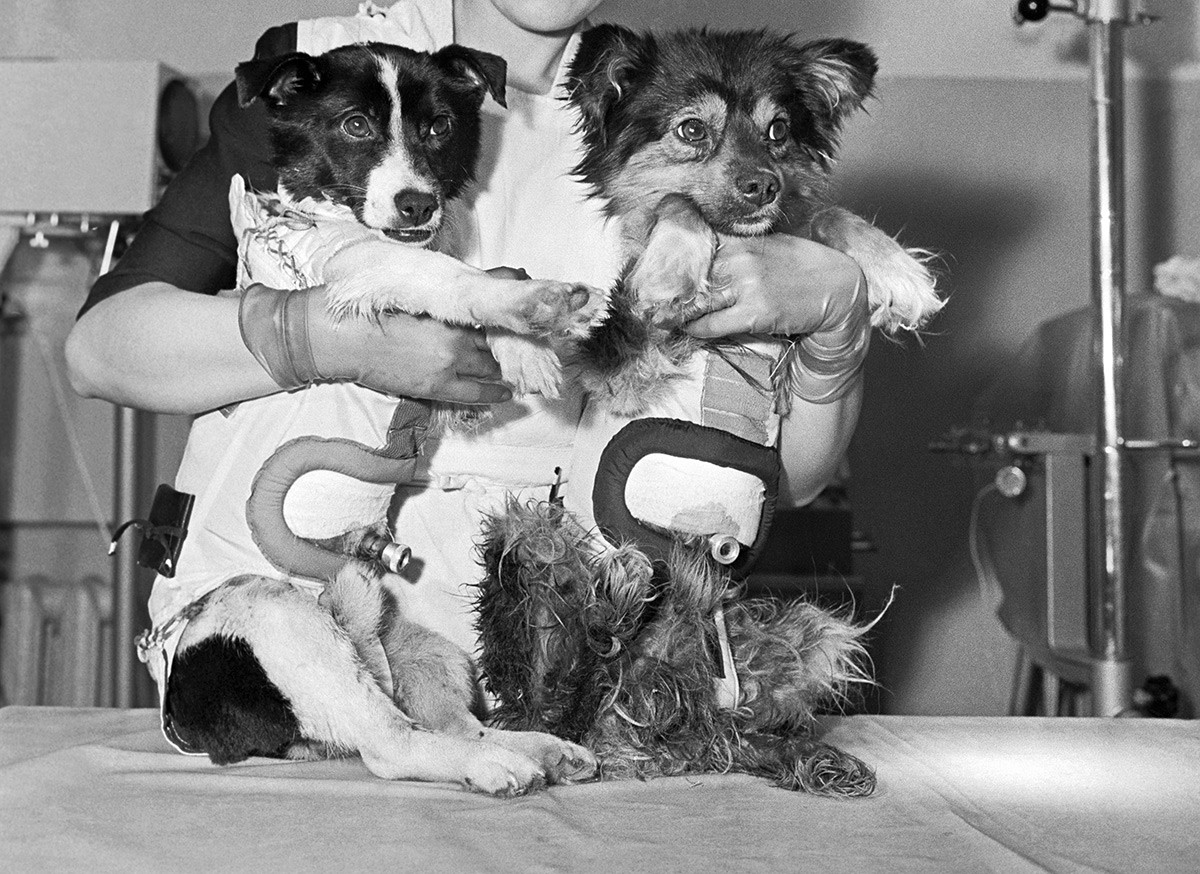 “It was decided that in space the dogs would be fed artificially, through a fistula [a tube in the stomach through which they were fed]. Special homogenized food had to be developed for them, so that it would enter their stomachs in portions... Information retrieval had to take place automatically. All this had to be tested on Earth and more than once,” recalled Yuri Senkevich, a member of the team that prepared the mission, in his book If Stars Light Up... 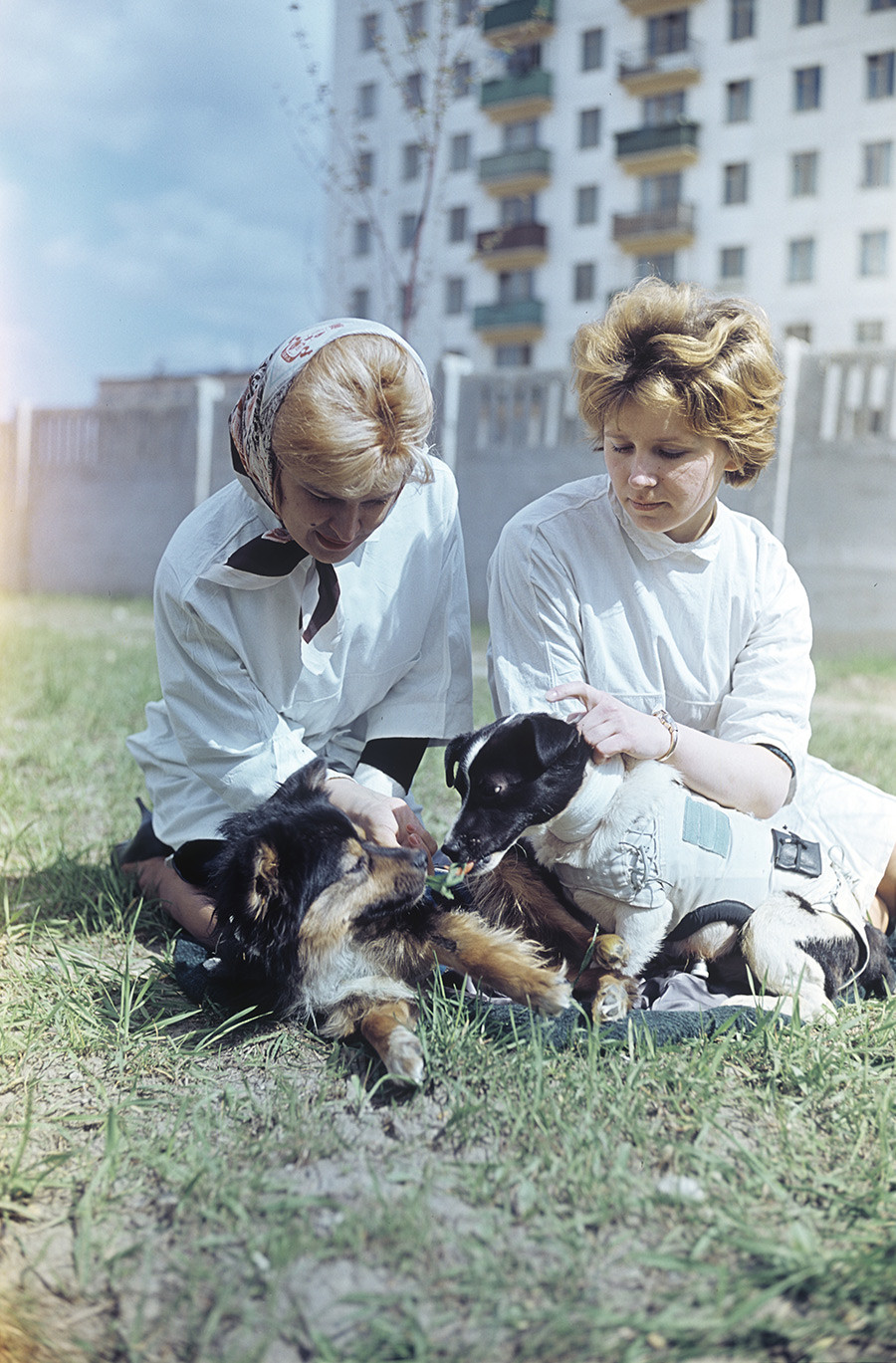 In addition to the fistula, the dogs had catheters inserted in their aortas, subcutaneous ECG electrodes and, most painfully, had to have their tails amputated. The latter was necessary because the tails interfered with the exhaust ventilation system in the space capsule, so they had to be docked. That was a difficult and dangerous operation because it was carried out on grown-up dogs. Veterok and Ugolyok coped with it well, but two dogs from the team died after they woke up from anesthesia and tore their bandages off. In total, about 100 mongrels were operated on, but only 30 of them progressed to the final test.

Days and days of standing still 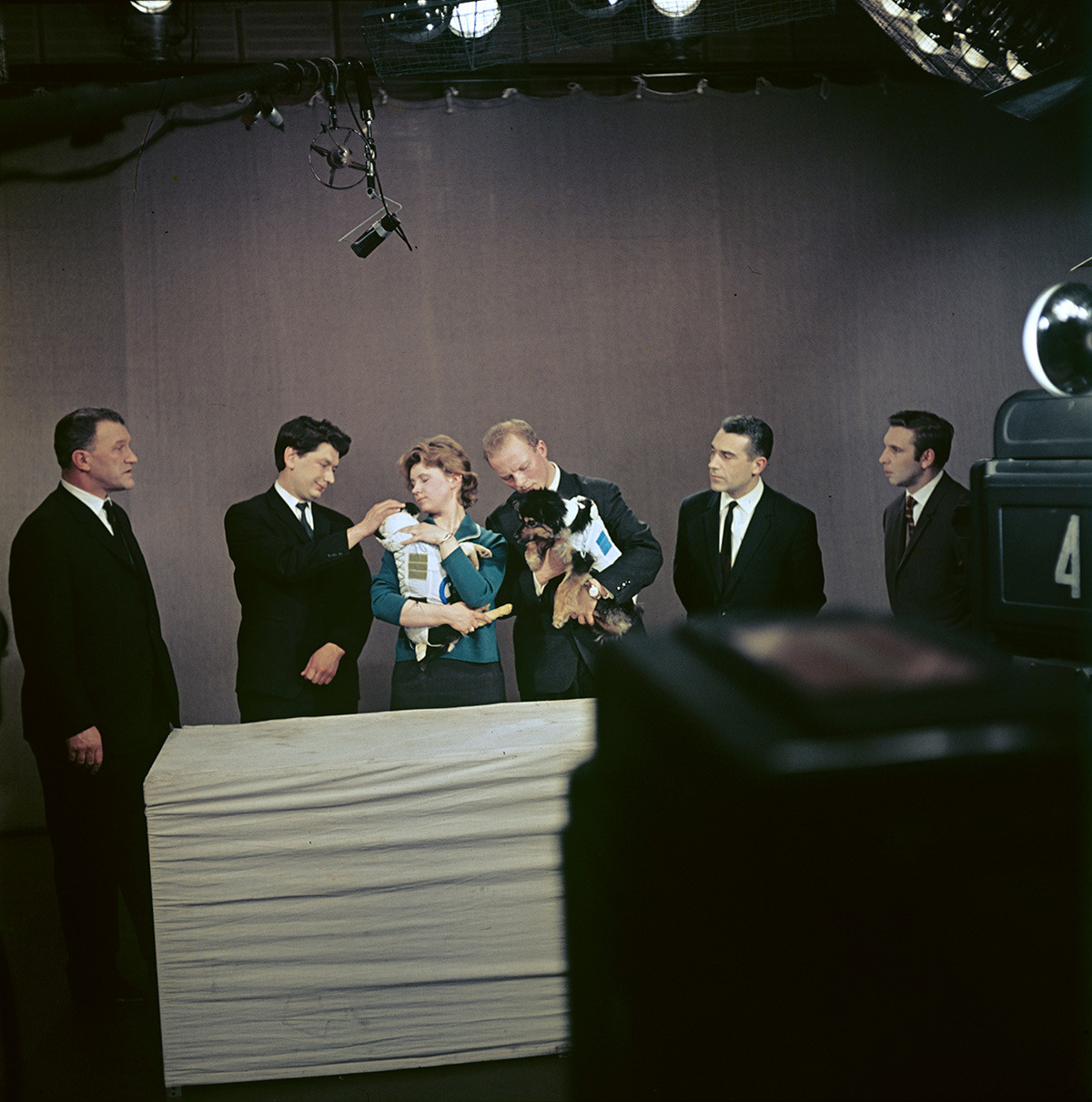 After that, the canine candidates for the space mission had to be trained to remain standing and immobile for a long time. At first, they were fixed in the capsule for just a few hours, but each time the duration of time they remained in that position was extended.

In those experiments, the dogs were fixed in a certain position in which they could not sit or lie down, but were left standing, hung in the straps sewn to their suits. Starting from the 20th day, the dogs’ mental state began to be affected. Almost all of them started to lose weight and became listless. After 35-45 days, all the dogs, irrespective of how well-trained they were, began to whine. Overall, as part of preparations for the flight, three experiments were conducted, each lasting 50-55 days. In the end, it was decided that the space mission itself should not last more than 20 days, as this was considered the most optimal duration. 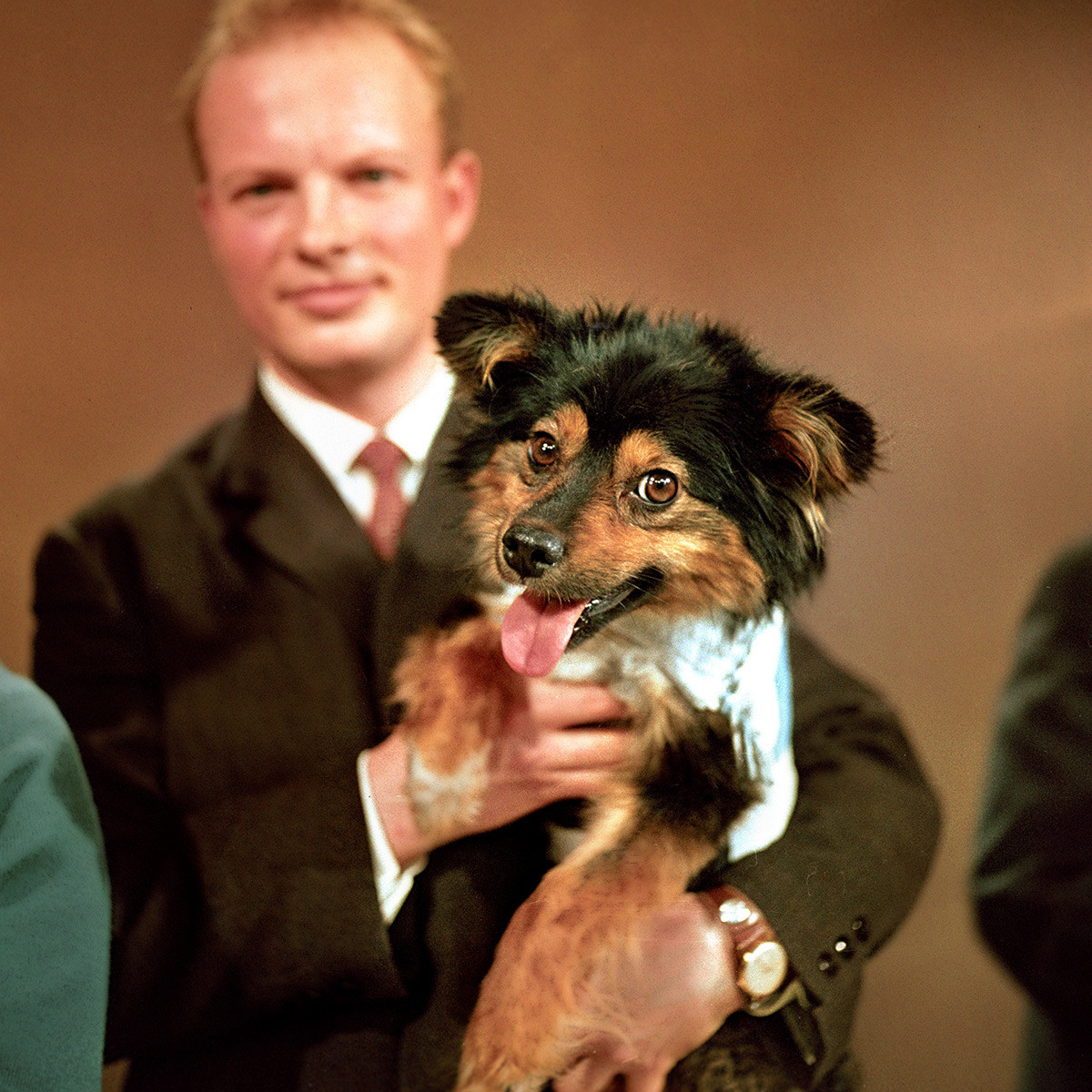 Veterok and Ugolyok turned out to be the hardiest. Veterok became the main test subject and Ugolyok, the control one. Later Senkevich wrote: “We worked without rest and prepared a most complex experiment in less than a year. Veterok and Ugolyok spent 22 days in space, and despite careful preparation, they had a hard time.”

The dogs were put into the spaceship six hours before take-off, into two separate capsules. In addition to them, the satellite was also carrying fruit fly larvae, bulbs and dry plant seeds, yeast, blood serum and some bacteria infected with viruses. 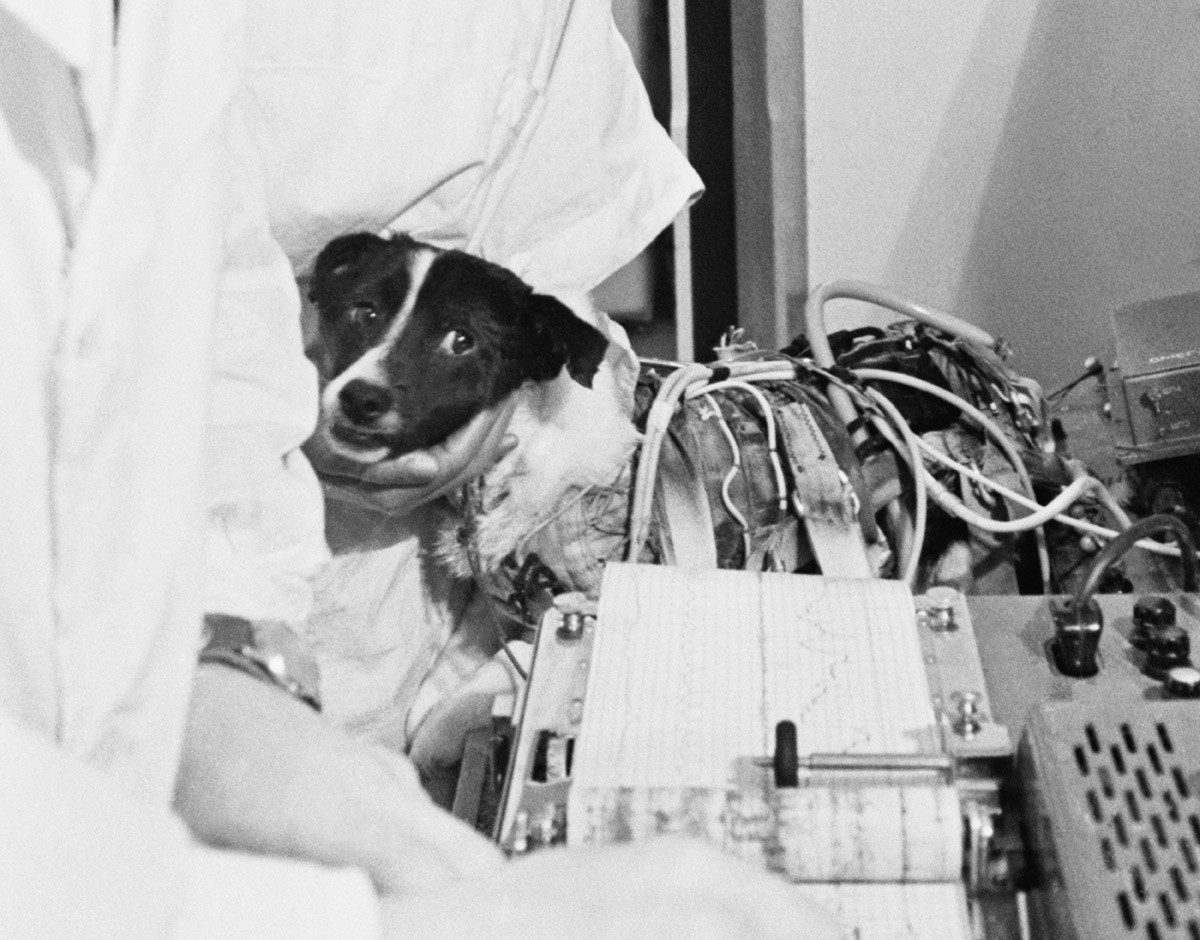 The mission went according to plan. Veterok received an anti-radiation agent directly into his bloodstream, with two other dogs – a control group – on Earth being kept in similar conditions, while Ugolyok did not receive that medication.

On the 21st day (yes, they remained in space longer than originally planned), the air inside the spacecraft began to deteriorate and it was decided to bring the satellite back to Earth. 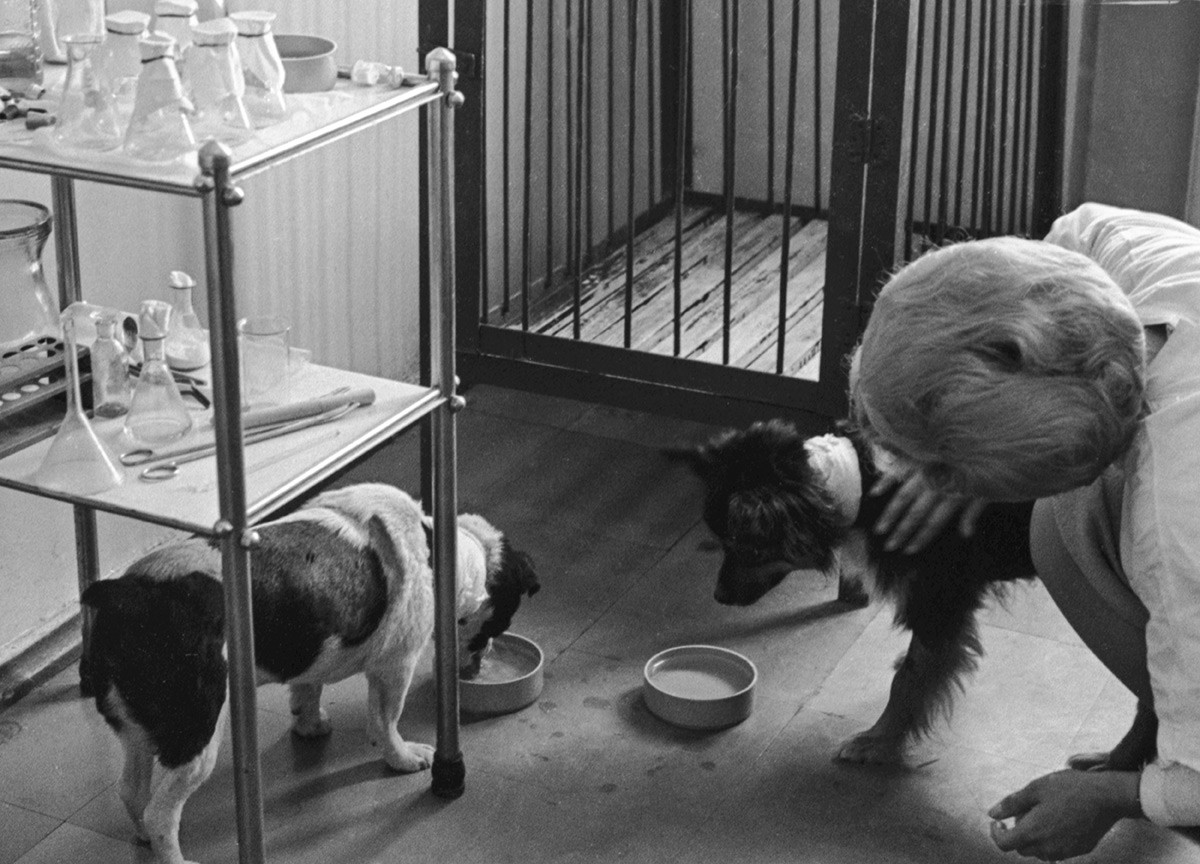 “The satellite landed on March 16 and already at seven O’clock in the evening the dogs were at the IBMP (Institute for Biomedical Problems of the USSR Ministry of Health). Everyone was jubilant. The capsules were brought to the operating room, where the dogs were removed from them. Our joy was replaced by pain when the dogs were stripped of their nylon suits and we saw that they had no hair - only bare skin, rash and even bedsores,” recalled Yelena Yumasheva, another employee of the institute.

The dogs could not stand on their feet and were very weak, dehydrated and with a racing heartbeat. But Soviet state TV channels were waiting for a report featuring the heroic dogs, so Veterok and Ugolyok were taken to a TV studio that very evening. 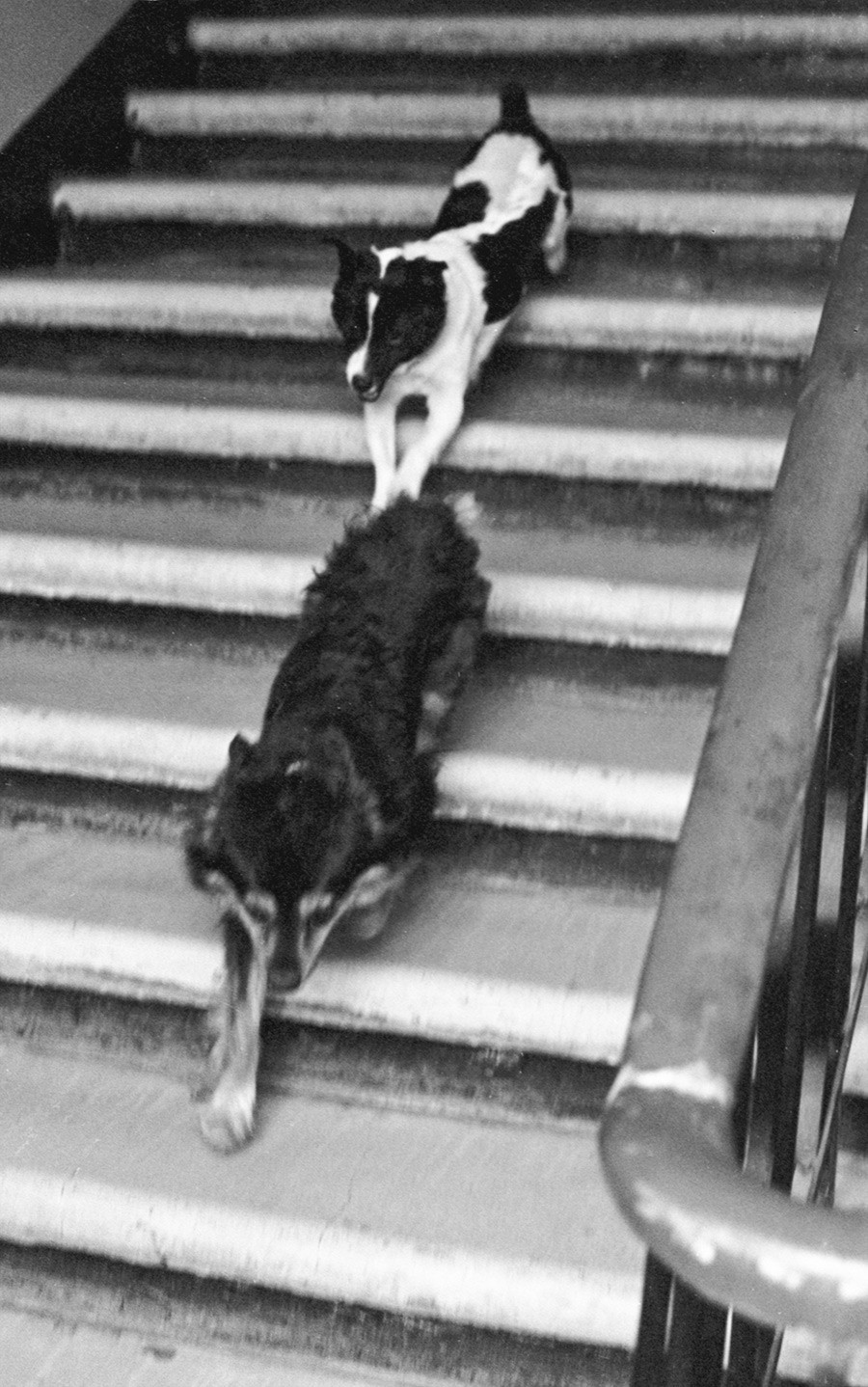 “The dogs were thoroughly washed with disinfectants, bandaged and taken to [the TV center in] Shabolovka for an Intervision Network session at 22:00. It was a live broadcast. We made it look as if the dogs were standing unaided. We felt very sorry for them, they were not even whining, just licking each other’s saliva,” Yumasheva said.

Nevertheless, both Veterok and Ugolyok made a speedy recovery. Already a month later, they were running around the institute courtyard. After their space mission, each lived a long, and quite an ordinary dog’s, life in the institute’s animal house until the end of their days. 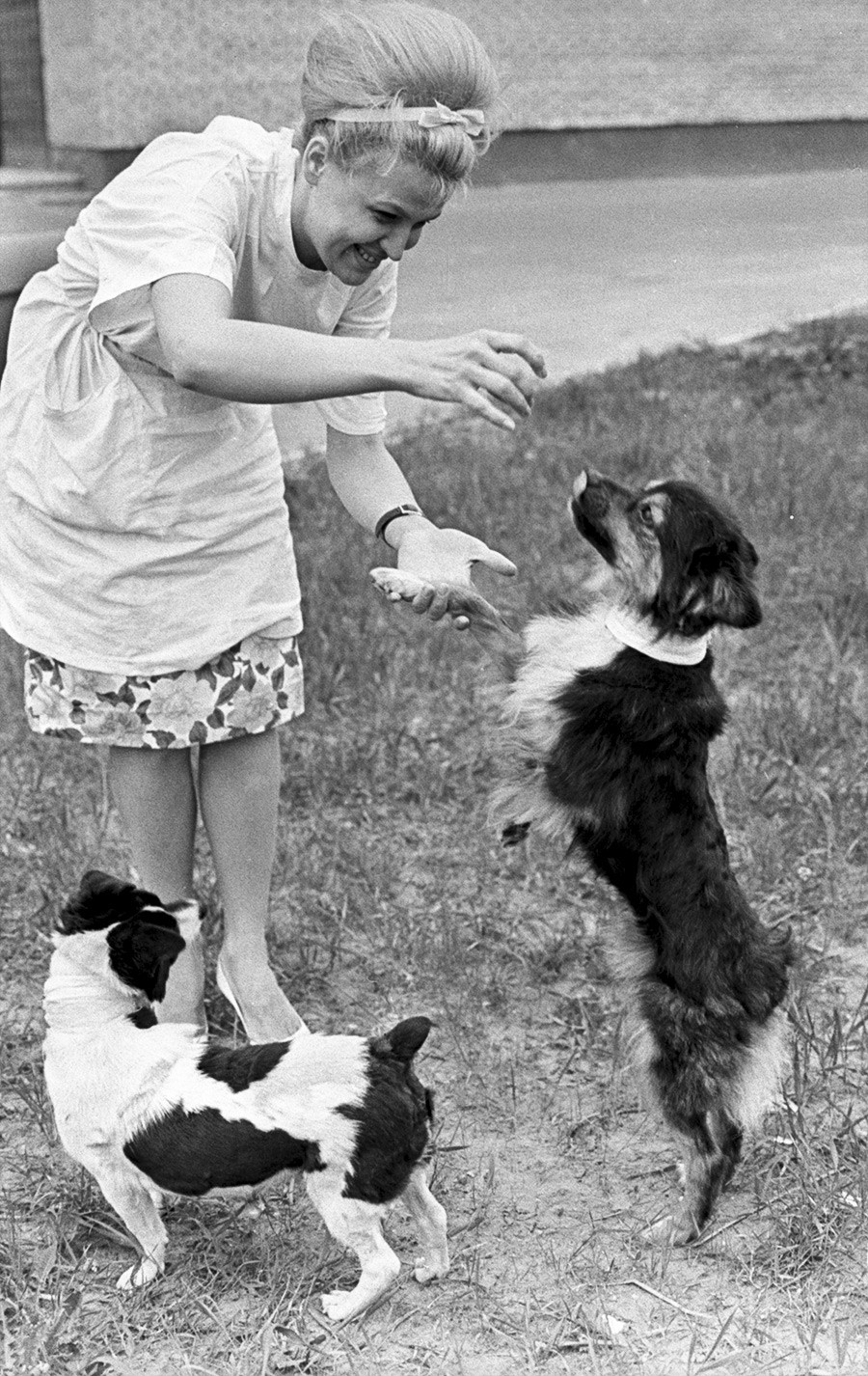 Ugolyok even left offspring - six puppies. Veterok, meanwhile, made his home under the desk of one of those scientists who sent him into space. As he grew older, he began to lose his teeth. The cause was calcium depletion. The dog could not even chew soft sausage, so for the last three years of his life, institute employees did it for him. Veterok died of old age when he was 12.

The experiment with Veterok and Ugolyok made the next step in the moon race possible. That next step was the flight of cosmonauts Andriyan Nikolayev and Vitaly Sevastyanov, which lasted almost 18 days.