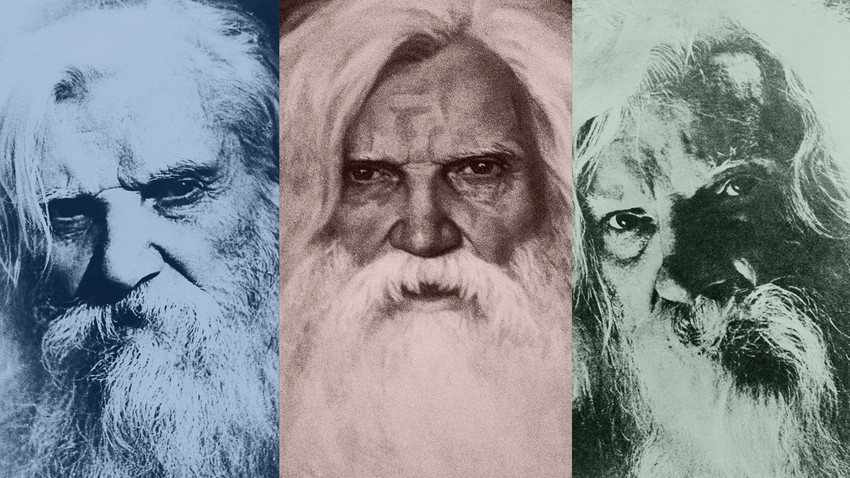 Alexander Sushenok/TASS
For more than 50 years, he walked naked and barefoot, wearing just boxer shorts – even in winter. He was tortured by the Nazis and even did time in the USSR’s harshest psychiatric institutions – but lived to be 85. Was Porfiriy Ivanov a practitioner of yoga, a leader of a sect or just plain crazy?

The Soviet authorities hated extraordinary people – if they weren’t working for the Communist Party. Porfiriy Ivanov was not. He simply propagated his version of a healthy lifestyle – and to prove its efficiency, didn’t use warm clothes and boasted exceptional health.

People flocked to see Porfiriy, considering him to be a spiritual leader – and the USSR authorities eyed the “Teacher” warily. To stop his activities, he was condemned to psychiatric wards. To this day, some people say Ivanov was mentally ill, some consider him to have been a genius. He may have been both.

Ice bucket challenge in the USSR

Porfiriy Ivanov in the snow

Ivanov’s early life is known largely from his own accounts. He was born in 1898 in a village in Lugansk Region, Ukraine (which was then part of the Russian Empire). What distinguished Porfiriy was his exceptional strength and height. When he was 15, he began working in the mines. “We worked tirelessly: sometimes we worked 20 hours a day,” Porfiriy said in his memoirs.

Porfiriy was drafted to the Russian Imperial army, but didn’t take part in military action – the Revolution struck and ended the war. In the Soviet state, Ivanov led a life of a standard ruffian – he gambled, drank and took part in village fights. “I was once an outlaw, robbed nature, killed cheerfulness, did not consider anything but a good life for myself — I did everything in order to live well. But then I moved away from all this and began to get closer to making friends with nature…” Ivanov wrote.

Porfiriy Ivanov in his younger years

In 1928, Ivanov spent 11 months in jail for tax fraud. But soon, his life changed irreversibly. As Ivanov himself wrote, one winter in the early 1930s, he developed cancer. Doctors said he was hopeless. Desperate, Porfiriy started to go out in the cold and pour iced water over himself in order “to perish faster”. Surprisingly, it led to the opposite effect – his strength, vigor and energy grew. Ivanov switched to everyday pourings of cold water.

Slowly, Ivanov renounced all clothes – he stayed only in knee-long boxers at any time of the year and walked barefoot even in winter. He stopped shaving and cutting his hair, abandoned his wife and two sons and went wandering around Ukraine and Southern Russia, propagating his new “Idea”, as he called it, of unity with nature. The principles were simple – cold baths in the morning and before sleep, full fast on Saturdays, regular deep breathing in the open air… But what made Ivanov an underground celebrity?

Looking like he did, Ivanov couldn’t possibly get a job in the Soviet state of the 1930s. But people were drawn to him, because in the times of uncertainty, famine and anti-religious Soviet propaganda, he offered an apparently healthy approach to lifestyle. However, for the state, he was just some madman running around half-naked and propagating some lame nature-loving ideas.

In 1935, Ivanov was first apprehended and put to a mental institution in Rostov-on-Don. Psychiatrists diagnosed Ivanov with schizophrenia, banned him from working and sent him away to his relatives in the Rostov region.

Porfiriy Ivanov 'healing' a girl with his touch

There is little trustworthy information on Ivanov’s whereabouts before World War II. But when the Nazis took over the Rostov region, Ivanov became known to them – as a kind of local phenomenon. Ivanov said the Nazis “tried” his abilities to the point of torture: they rode him on a motorcycle in the bitter cold and buried him in snow for hours. But, when Ivanov emerged from the snow, his body was all red, and steam was pouring from him, his biographers wrote. However, this information was again based on Porfiriy’s own accounts.

Surviving the war didn’t change Ivanov or his practices. In years after the war, he continued his teachings. By that time, Ivanov was calling himself a “Teacher”. Eduard Protopopov, an engineer, recalled meeting Ivanov in 1949 in Moscow, where he had come to heal and teach. “The Teacher washed everyone’s feet with cold water from a basin. Then he laid the seriously ill on the couch and put his hands on them: one hand on their head and the other on their toes. With others, he just held hands and talked about life and health. After that, he told everyone his advice: give to the needy, greet all people, do not spit on the ground, do not drink, do not smoke, go without food and water on Saturdays, wash your feet twice a day with cold water to “wake up”. And his last advice was to step on the ground barefoot, breathe fresh air and ask for health.

Practicing like this, Ivanov eventually attracted the attention of the KGB and subsequently did time in USSR’s harshest mental institutions. In 1951-1954, for anti-Soviet propaganda, he was put into compulsory psychiatric treatment in prison-type psychiatric hospitals. Food there was usually poor and those of the prisoners who did not receive food parcels from relatives would be starving. In the 1950s, there was almost no use of medication in mental hospitals - only “sonotherapy” was widespread: prisoners would receive large doses of sleeping pills so that they were constantly asleep, except during meals. Only Ivanov’s truly exceptional health helped him survive this “detention”. In 1964, he was again apprehended for fraud, but deemed mentally ill. He spent the next 4 years in mental institutions once again.

By that time, Ivanov’s fame was considerable. He often traveled from his village in the Rostov region to Moscow to “heal” people. One of his disciples recalled: “The Teacher often came to Moscow at the invitation of some people who were ill. From all over the city, people went to the train station to meet the Teacher. And when he got out of the train car, everyone rushed to kiss him. [...] When I entered the room – people were sitting everywhere, waiting. The Teacher came out, statuesque, blue-eyed and white-haired. He folded his hands on his chest and would say affectionately: “My dear friends, I have come here to keep you healthy.”

In the 1970s, Porfiriy Ivanov became a local “Guru” in Verkhnyi Kondruchiy, a village in Lugansk Region, Ukraine, where he lived and received visitors and disciples. In November 1975 – March 1976, he was put into a mental institution yet again – this time because he had simply wanted to attend the 25th Congress of the Communist Party of the Soviet Union!

At 77-78 years of age, Ivanov was no longer very strong and, at the hospital, he was “treated” almost to the point of dying. Ivanov was sent home to his disciple and friend, Valentina Sukharevskaya, in terminal condition. But when a psychiatrist visited his home three days later to check if the old troublemaker was dead already, Porfiriy opened the door himself – dressed in his usual boxers.

Ivanov helping one of his disciples to a cold shower

However, in 1979, Ivanov was detained again – now confined to house arrest, after a great number of his disciples and followers had flocked to his village home to celebrate another anniversary of the beginning of his teachings. This house arrest ended only in 1982, when an article about Ivanov and his healthy lifestyle appeared in ‘Ogonyok’, one of the USSR’s most popular magazines. Finally, in the last years of his life, public recognition finally came to Ivanov. In total, he spent over 12 years in jails, hospitals and mental asylums.

Ivanov and his disciples

Porfiriy Ivanov died in 1983, aged 85 – but for his followers, this was only the beginning of large-scale activity. Encouraged by official “recognition” of Ivanov’s teaching, his followers organized gatherings, conferences and published Ivanov’s writings. In 1992, around 10,000 people gathered near Ivanov’s former home for a celebration. There are still thousands of Ivanov’s followers that confirm the usefulness of his system; however, no certain scientific proof of its merit was ever presented by Ivanov or his followers – just oral accounts.