Who is the man between Biden and Gromyko back in 1988? 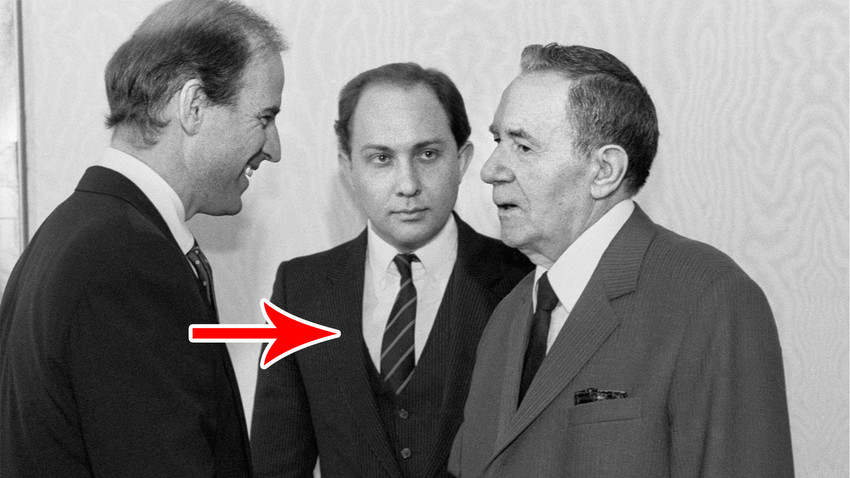 The photo below went viral when Joe Biden was announced by the media as the new president-elect of the United States. It shows Biden smiling and shaking hands with the Soviet head of state Andrei Gromyko back in 1988. 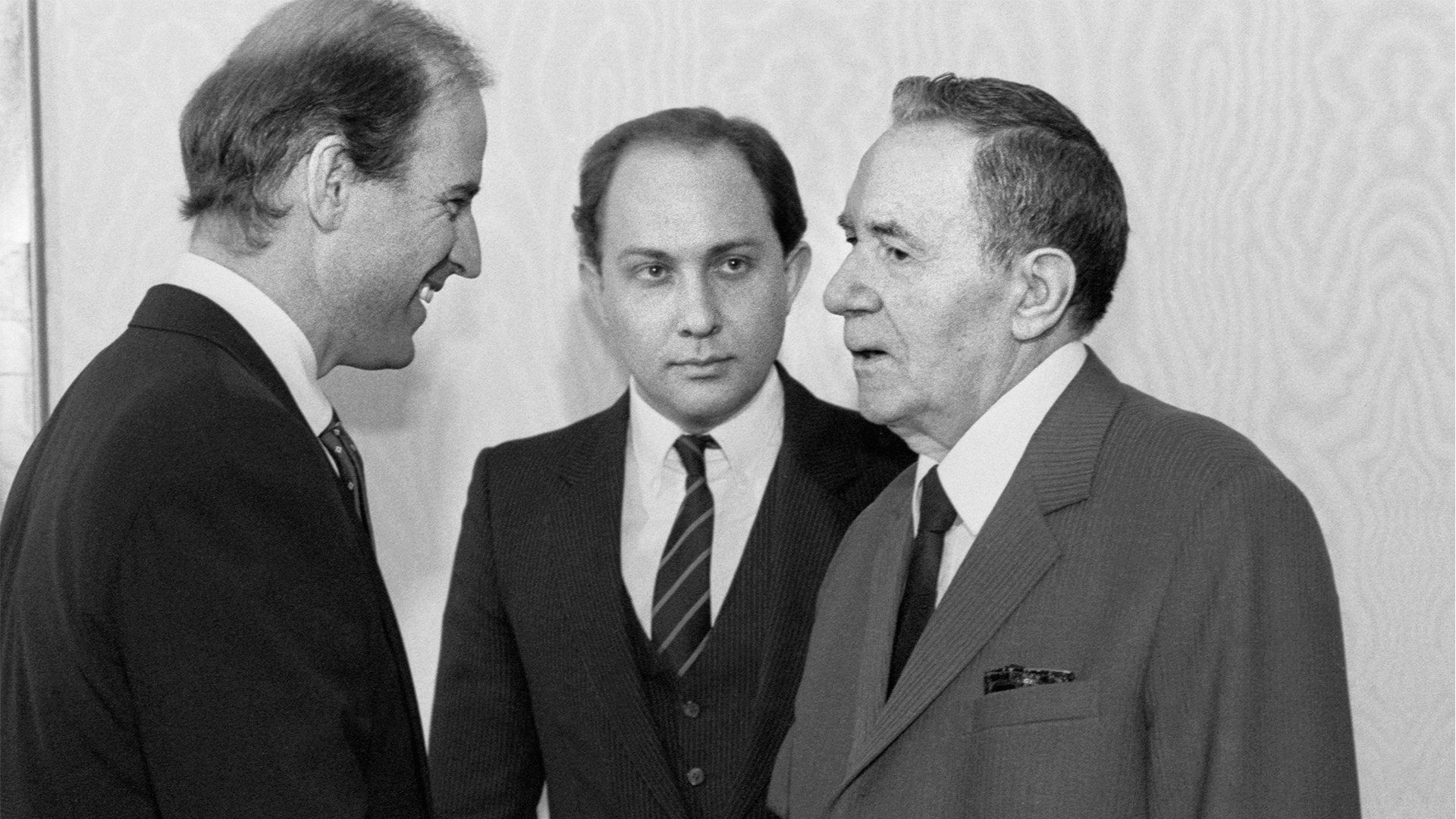 There is also another man caught standing between the two politicians. He looks composed, focused and attentive. In the subsequent decades, Victor Prokofiev — the interpreter of choice for many Soviet high office politicians — would come to assist Bill Clinton, George H. W. Bush, and even Russian oligarch Roman Abramovich.

The path to power politic

For Prokofiev, the path that placed him in the middle of Cold War diplomacy and geopolitics began at the School of Law of the Moscow Institute of International Relations where he studied international law, as well as the English, French and Spanish languages, beside his native Russian. As a young graduate in 1977, Prokofiev pondered about an academic career, but finally opted for another option that proved to be a fateful choice.

“I got wind of the UN language training course and I thought it was a very interesting proposition that would allow me to use my four languages and also learn more about international law, finance and economics,” says Prokofiev, speaking exclusively with Russia Beyond.

Since the UN language course was jointly funded by the Soviet government and the UN, the young Prokofiev was on the radar of the Foreign Ministry of the USSR.

Five years later — after various postings in the UN office in Geneva as an interpreter and lawyer — Prokofiev’s old contacts yielded fruit. In 1984, Prokofiev joined the ministry as a staff interpreter.

Gradually, the young staff interpreter rose up the career ladder within the ministry. In 1985, Prokofiev utilized knowledge he obtained as the Russian government interpreter translating ongoing disarmament talks between the U.S. and the USSR in Geneva, assisting Gorbachev and Ronald Reagan, who at their first ever summit were trying to break up with the arms race that had entwined the two superpowers.

“You’ll be surprised, but there was very little competition in the sense of people vying for the position and trying to get the top job. It was natural selection,” said Prokofiev. 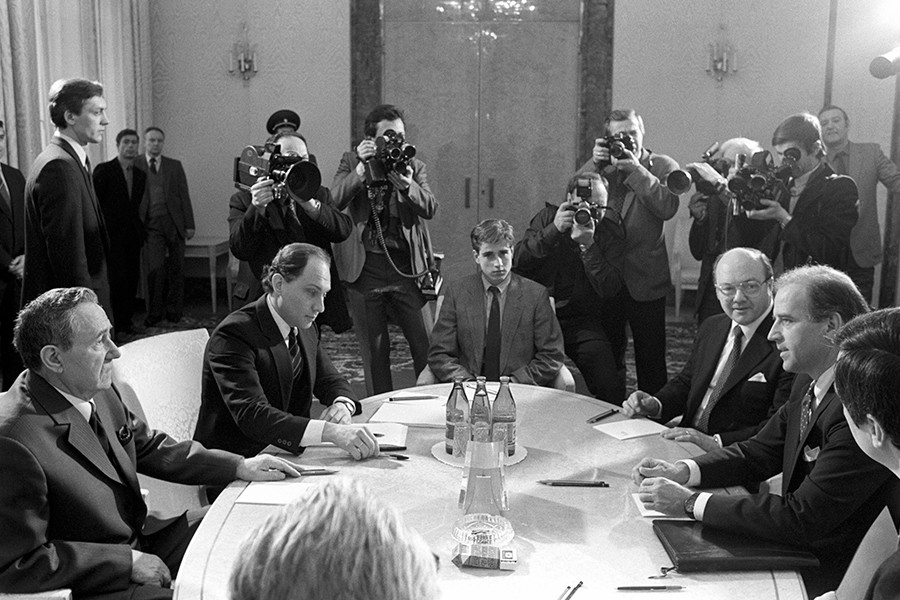 As an older generation of iconic Soviet interpreters — like Viktor Sukhodrev — gave way to younger professionals, Prokofiev’s path to the highest level negotiations that decided the fate of the human race was clear.

In 1988, he was selected to translate for a group of U.S. senators who had traveled to the USSR to speak with the Soviet president (which should not be confused with the more powerful position of the General Secretary) and ex-foreign minister Andrei Gromyko about the prospects of a ratification of the Intermediate-Range Nuclear Forces Treaty (INF Treaty) that Reagan and Gorbachev had signed in December the previous year.

“Obviously, I knew who he was, because I had spent hours and hours on end being briefed by foregin ministry diplomats  in the runup to that meeting with Sen. Biden. One of the reasons I was assigned to translate for Gromyko was that they knew they were going to discuss the ratification of the INF treaty. I was the obvious choice, because there were only so many people in the language department who had had any exposure at all to those military terms and concepts,” said Prokofiev who said that back in his INF talks days in Geneva he had to learn the underlying concepts of physics and mathematics related to cruise and ballistic missiles to be prepared for the job.

Prokofiev refused to share his insight into Joe Biden’s personality but described him as an “excellent speaker” back then.

“The impression that he made was that of a very good, very articulate speaker. Someone who was completely up to speed on the political minutiae of the ratification process that he was discussing with Andrei Gromyko,” says Prokofiev.

What surprised the otherwise impassive and professionally cold interpreter was the decision of Joe Biden to take his son with him to the Soviet Union and let him sit at the negotiations table with the top of the Soviet leadership.

Showing astonishing awareness of the finest details of the negotiations that took place 32 years ago, Prokofiev cannot recall whether it was Hunter or Beau — two of Joe Biden’s sons — who attended the meeting, despite being able to effortlessly recall the years of their births, 1970 and 1969 respectively.

“I was amazed he didn’t come alone. He was there with his son. And I’m sure the matter has been discussed between the office of Andrei Gromyko and the U.S. embassy, because Jack Matlock, the U.S. ambassador to the USSR, was also there.”

“He [the son] was introduced by Joe Biden to Andrei Gromyko as, ‘Mr. President, this is my son. I hope you don’t mind his sitting in. He is interested in international affairs and matters of diplomacy and policy-making.’ And obviously, Gromyko said, ‘Of course, it will be a pleasure’,” recalls Prokofiev of the exchange between the two politicians about the matter that struck the interpreter as unusual at the time.

Decades later, in 2020, the father-son relations of Joe and Hunter Biden would become a point of interest to critics and opponents during Joe Biden’s presidential campaign as they claimed Hunter was guilty of exploiting his relations with his father to advance personal business interests in post-Soviet Ukraine.

At the time of the 1988 meeting, Biden’s son was just a silent observer.

For Prokofiev, who like others in 2020 followed Joe Biden’s bid for the presidency on the news, the potential election of his brief acquaintance to the Oval Office didn’t awe or impress the experienced interpreter.

“He was one of the hundreds of people for whom I had worked over the past 40 to 45 years,” said Prokofiev, who in his professional career had met a great many notable figures like Richard Nixon, Ronald Reagan, Bill Clinton, George H.W. Bush, Henry Kissinger, Al Gore, Dick Cheney, Donald Rumsfeld, Frank Carlucci, Margaret Thatcher, and Rajiv Gandhi, as well as many more high profile politicians. 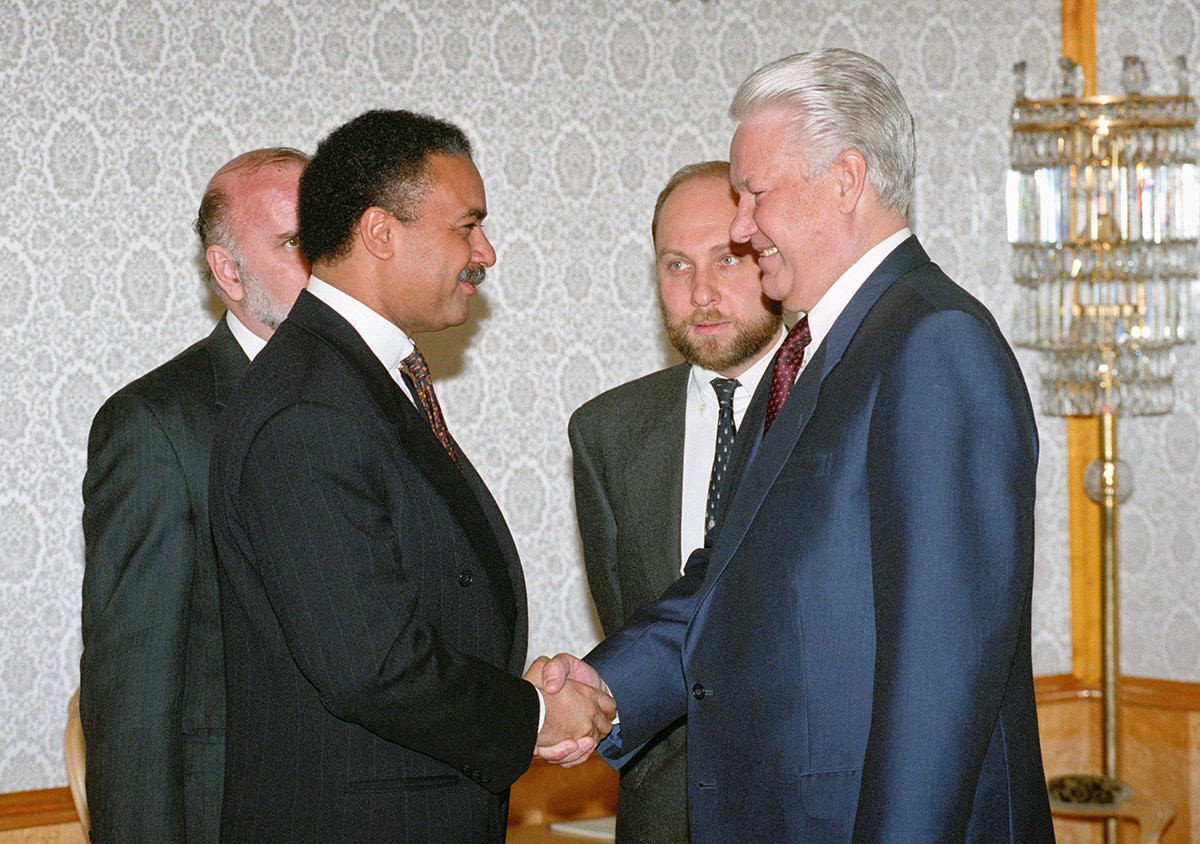 Prokofiev left his job at the ministry of foreign affairs in 1994, the period in which post-Soviet Russia largely withdrew from the international scene and power politics to attend to more pressing economic matters the country faced at the time. As capitalism came to newly independent Russia, the former diplomat acquired new clients: top international law firms acting for the newly rich Russian oligarchs who were settling business disputes in courts. 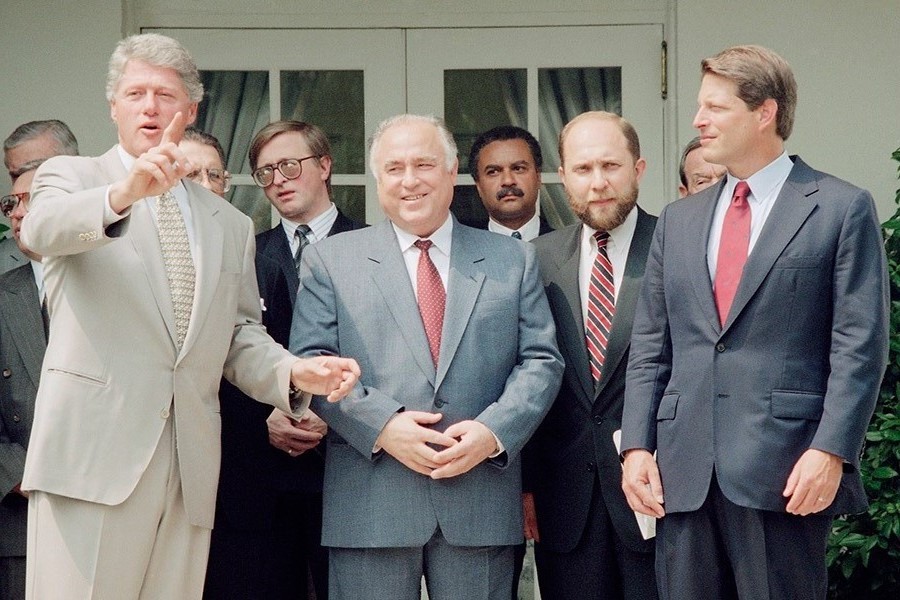 President Bill Clinton gestures while appearing in the Rose Garden with Russian Prime Minister Victor Chernomyrdin in Washington on Sept. 2, 1993. Victor Prokofiev is next to Chernomyrdin.

In 2003, Prokofiev relocated to London, where he offered his services to private and public clients who were embroiled in legal disputes in the UK courts. At the famous Berezovsky v Abramovich case, Prokofiev translated for Lord Sumption, who later went on to become a Justice of the UK Supreme Court, after he had completed his service as the lead barrister to Roman Abramovich. 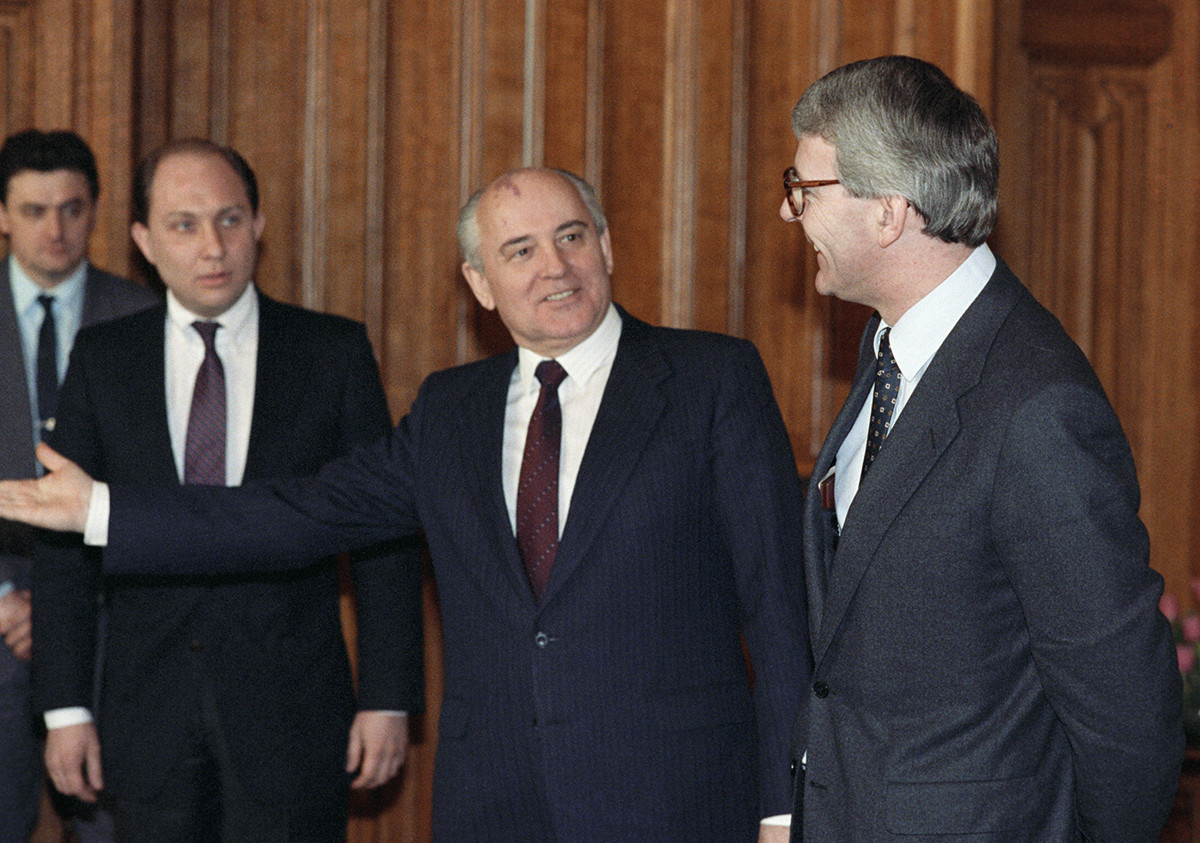 Regardless of who he translates for, Prokofiev defines language as his “client”: “I work for the sake of language. It is always a sparring match between me and the language. I hear a word, a sentence, a joke — something that I need to translate — and I only have a split second to deliver the goods. It’s a wonderful challenge and always a shot of adrenaline.”

The ex-ministry employee believes he is still bound by a nondisclosure pledge he had given to the state at the beginning of his career at the ministry, despite the fact that the Soviet state is long gone. Asked if the old Soviet nondisclosure is legally enforceable today, Prokofiev hesitates before answering: “I believe I am still bound by that. It’s part of my DNA.”

Click here to read about another Soviet interpreter whom the U.S. presidents trusted the fate of superpower talks.