How Reagan and Gorbachev met to prevent WWIII (PHOTOS) 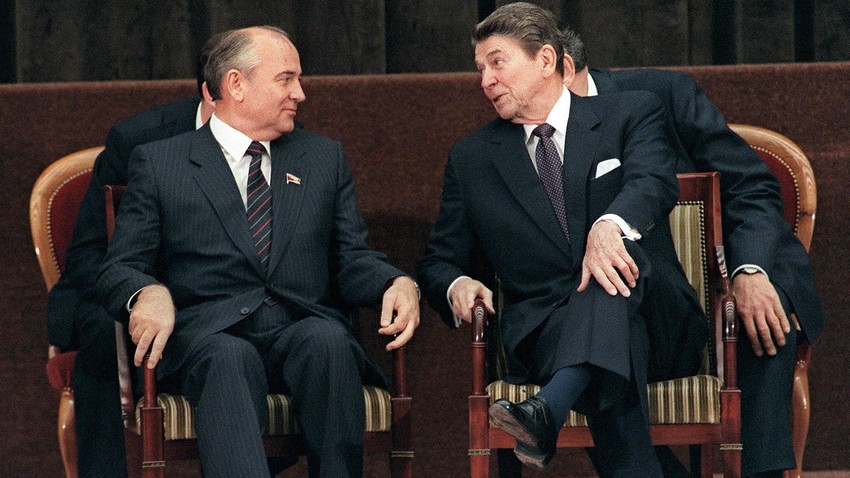 Getty Images
The two leaders called each other names, but made the end of the Cold War possible, nonetheless.

The late 1970s and early 1980s was not the best time in the Soviet-American relations: the USSR sent troops to Afghanistan and the U.S. worked hard to give the Soviets their own “Vietnam”; additionally, there had not been any meetings between state leaders of the two superpowers and Cold War rivals since Jimmy Carter had met with Leonid Brezhnev in Vienna in 1979. 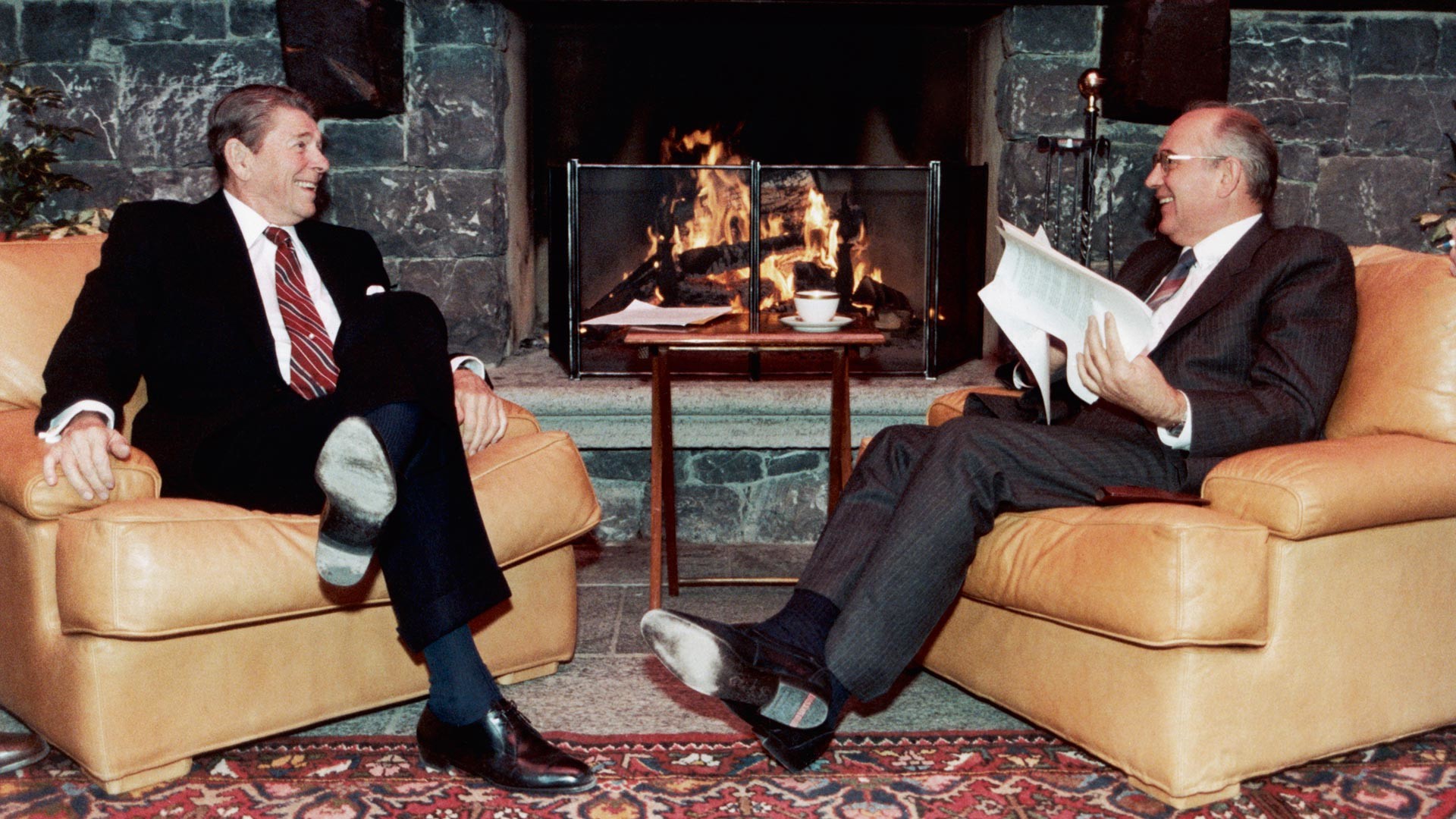 Ronald Reagan and Mikhail Gorbatchev share jokes on a break during the Geneva summit.

Everything changed when the death of Soviet leader Chernenko in 1985 triggered unforeseen changes in Soviet politics. That same year, upon a recommendation of influential Andrei Gromyko, the Soviet political elite chose a relatively young politician named Mikhail Gorbachev (who was 54 at the time) as the USSR’s new General Secretary. 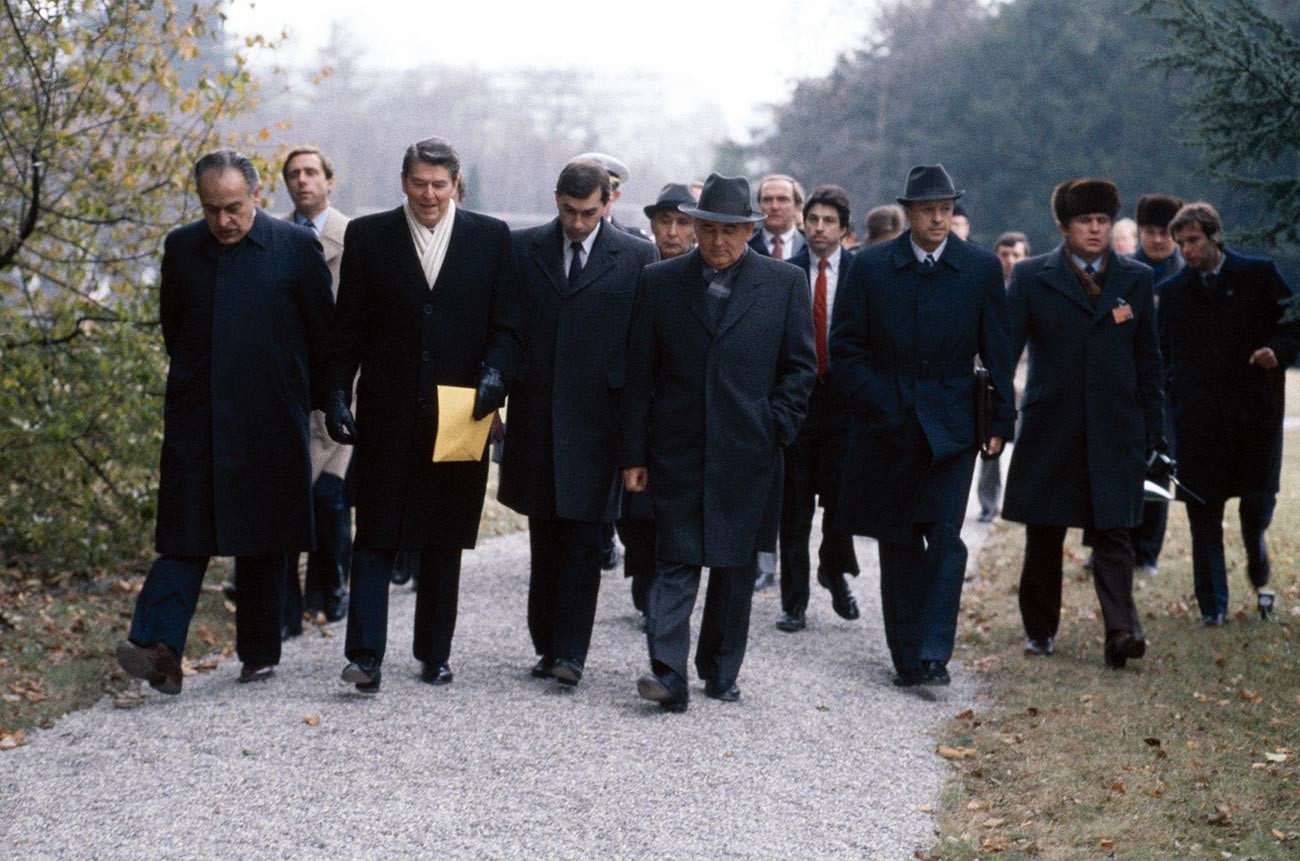 The new Soviet leader had fresh ideas about Soviet foreign policy, Soviet-American relations, the Cold War and the arms race with the U.S. Gorbachev was prepared to break away from the strategic concept of ‘Mutually Assured Destruction’ (aka. MAD) — a theory that stipulated that the two nuclear superpowers were safe, as long as they maintained enough nuclear warheads to totally annihilate each other in case either of them launched a missile first — and instead explore the potential of the idea of “common security”, thinking that the USSR could secure itself from a U.S. attack by fostering cooperation with the ideological enemy.

On the other side of the Iron Curtain, the 40th President of the U.S. Ronald Reagan nurtured plans to curtail Soviet nuclear potential and secure the U.S. from a hypothetical nuclear strike by using technology that would allow the U.S. military to shoot down approaching nuclear missiles in space, known as Strategic Defense Initiative and dubbed “Star Wars” by the media.

By the mid-1980s, both sides realized the need to find a way out of the ongoing arms race between the U.S. and the USSR. So, Reagan and Gorbachev scheduled a meeting in Geneva for November 19, 1985.

Many American observers saw Gorbachev as a more moderate, liberal and compromising Soviet leader than any before him. They liked the way he dressed and they also liked his charming wife Raisa, who was also Gorbachev’s closest advisor, albeit in an unofficial capacity of the first lady. Others believed Washington should not fall into a trap of what could have been a false impression. 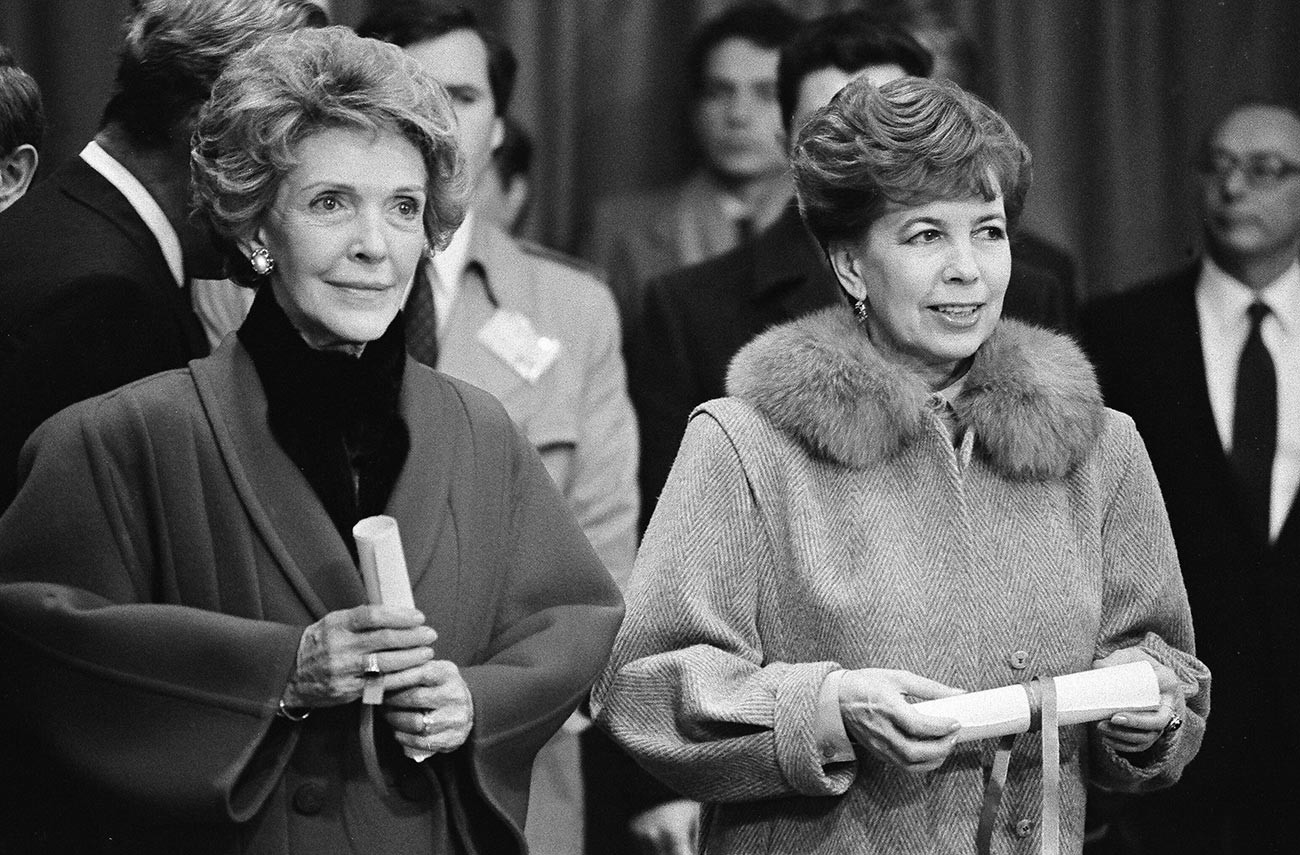 Nancy Reagan (L) and Raisa Gorbacheva (R) hold scrolls during cornerstone unveiling for a new museum at the headquarters of the International Committee of the Red Cross in Geneva, Switzerland November 20, 1985.

Ronald Reagan, initially skeptical of his counterpart’s intentions, came to Geneva ready to fight and was also accompanied by his wife Nancy. An older leader — the U.S. President was 74 at the time the meeting took place — Reagan came to Geneva to convince the younger Soviet leader that, while the U.S. did not benefit from the arms race, his country would inevitably win should it go on, according to Jack Matlock, the former adviser to Reagan, who would later become the U.S. Ambassador to Moscow.

The Soviet delegation arrived in Geneva on November 18, 1985. The next day, Gorbachev and Reagan met in person for the first time.

Reagan was expecting Gorbachev when the latter arrived at the meeting by car. On a freezing morning, Gorbachev had a warm coat and a hat on. When Reagan saw it, he quickly took off his own coat and rushed to meet the Soviet counterpart dressed in an elegant suit. 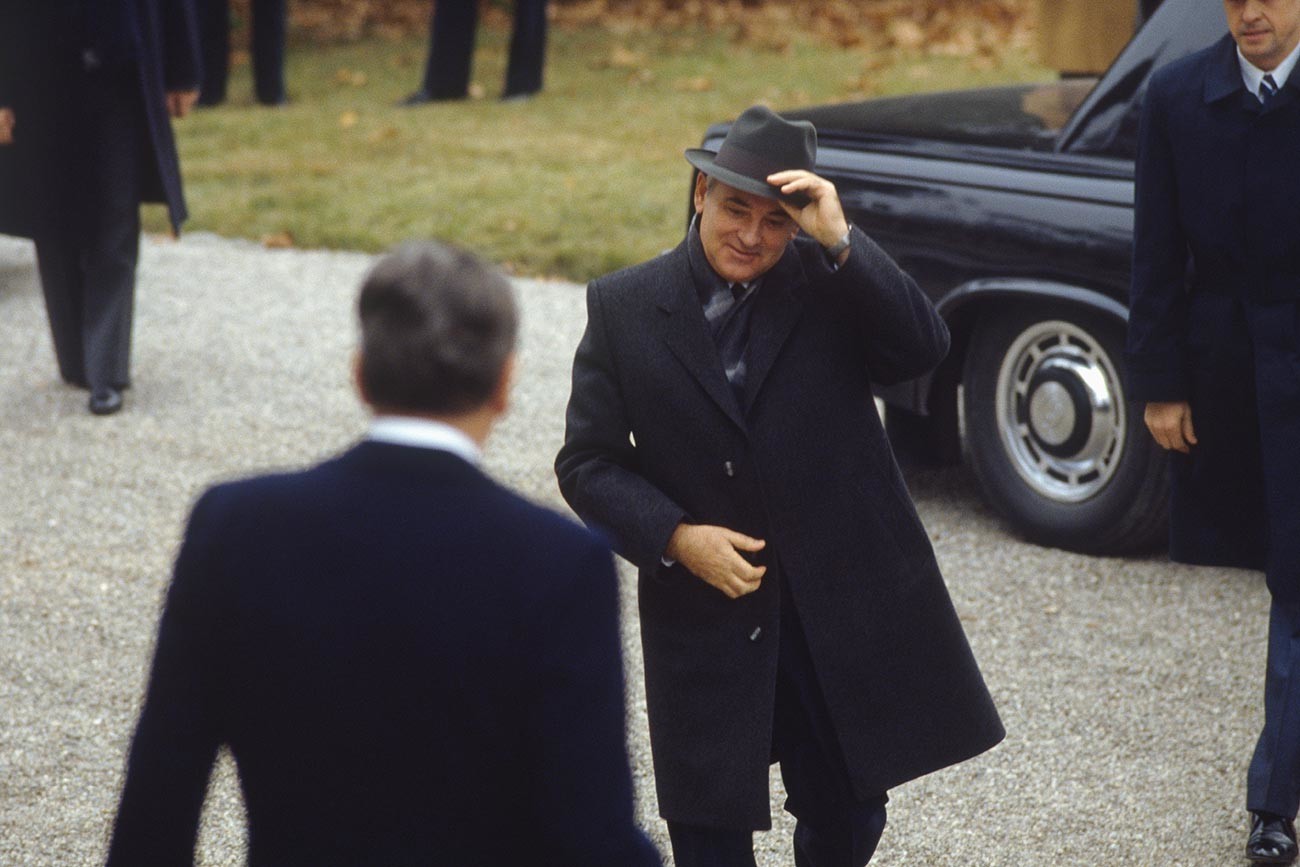 “In the numerous photos published, the U.S. President looked energetic, youthful and physically strong compared to the warmly dressed Gorbachev. The difference in their years was not felt at all. […] Reagan’s ‘publicity’ instinct kicked in. Gorbachev quickly took this into account and when the American Presented [later] arrived at our residence, he also met him in a suit,” wrote Anatoly Dobrynin, who was the Soviet Ambassador to the U.S. at the time the meeting took place. 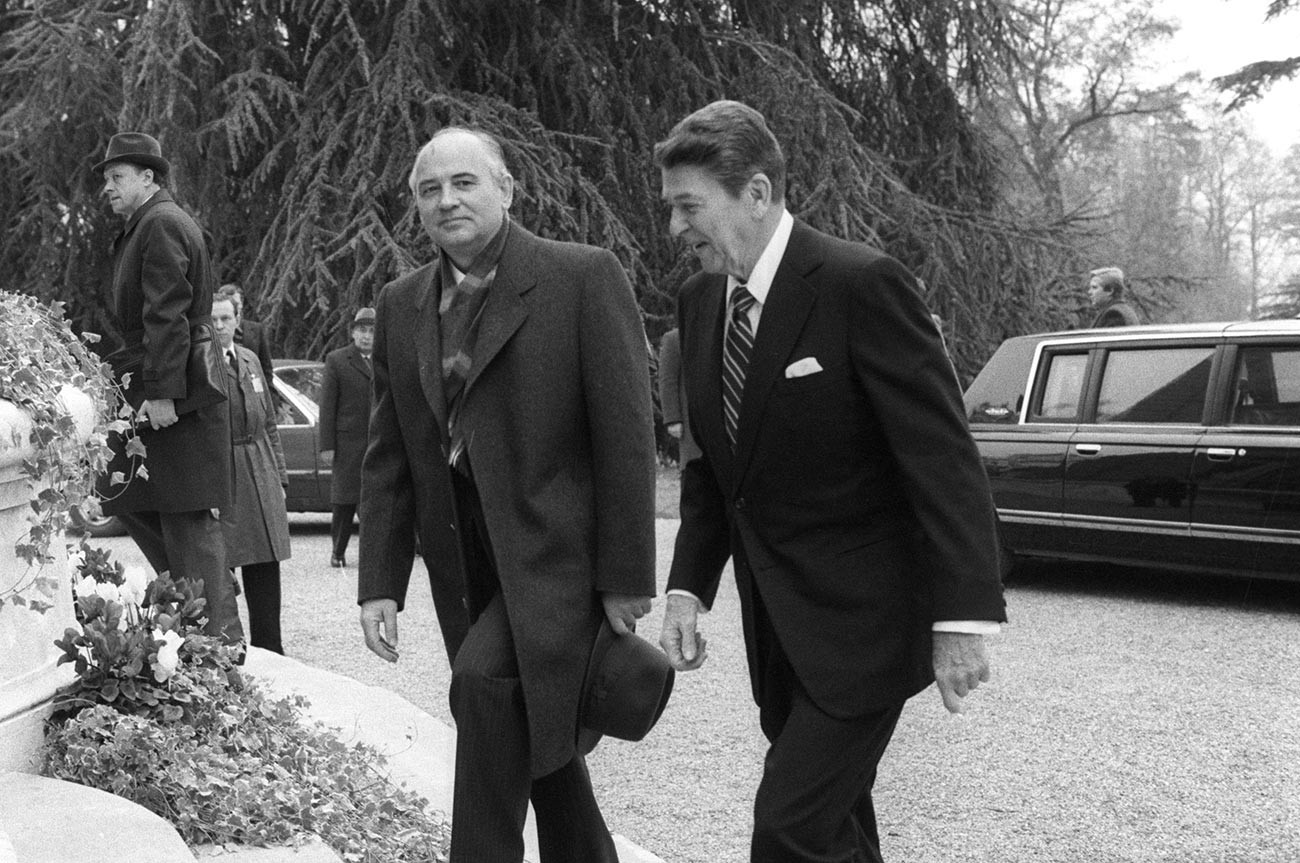 "The difference in their years was not felt at all. Reagan’s ‘publicity’ instinct kicked in."

The Dinosaur and the Bolshevik

Surprisingly, the meeting was not very successful. Gorbachev was suspicious of Reagan’s plans to annihilate the effect of the MAD deterrence by switching to the Strategic Defense Initiative and warned the U.S. leader of a potential arms race in space. 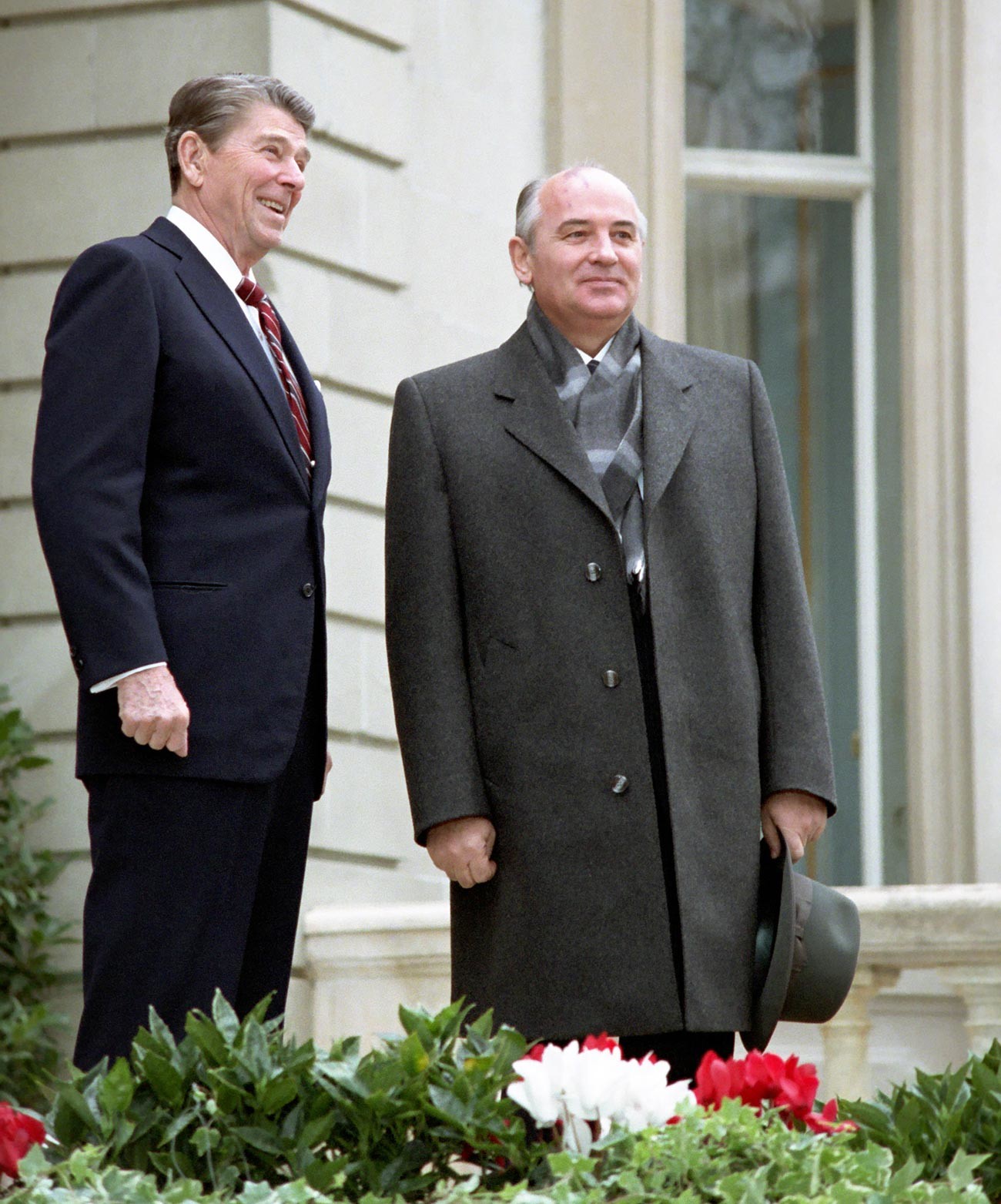 Reagan insisted the SDI initiative should not be considered a space weapon, but merely a defensive technology. Gorbachev also did not trust Reagan’s promise to share the technology with the Soviet Union once it was developed.

At the end of the day, Gorbachev reportedly called Reagan a conservative and a “dinosaur”, while the U.S. President referred to the Soviet leader as a “hard-headed Bolshevik”.

Although the first day of the negotiations ended in a stalemate, observers noticed something they hadn’t seen in Soviet-U.S. relations for a long time: personal chemistry between the two leaders was clearly visible. 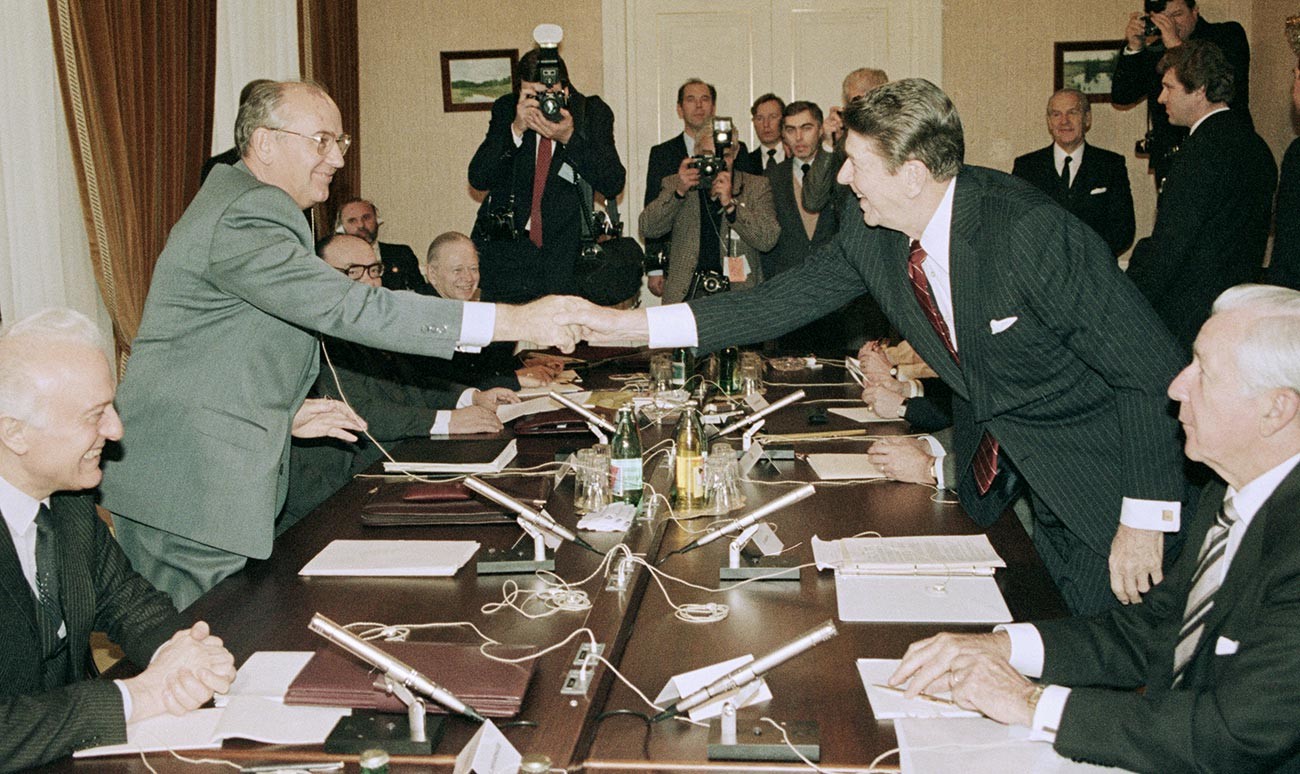 "Personal chemistry between the two leaders was clearly visible"

“The personal chemistry was apparent. The easy and relaxed attitude toward each other, the smiles, the sense of purpose, all showed through,” wrote Reagan’s Secretary of State George P. Shultz. 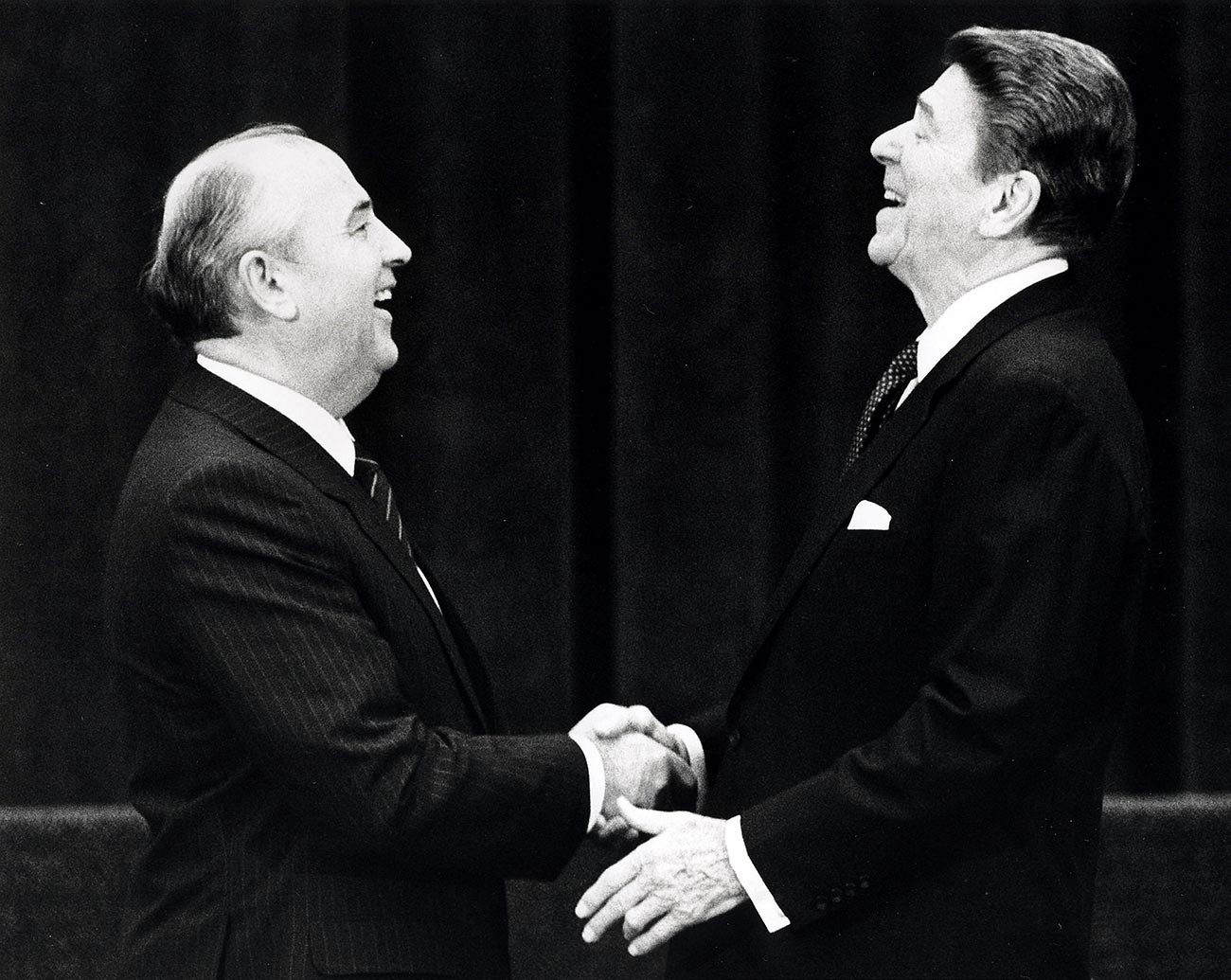 “The personal chemistry was apparent. The easy and relaxed attitude toward each other, the smiles, the sense of purpose, all showed through.”

Indeed, Reagan and Gorbachev had continued with the negotiations and finally reached a shared understanding that both sides should work to stop the arms race. The American and the Soviet leader issued a joint statement that served as the groundwork for what would soon become the end of the Cold War and of the bipolar world order.

Ronald Reagan and Mikhail Gorbatchev share jokes on a break during the Geneva summit.

The key message of the joint statement read: “The sides, having discussed key security issues and conscious of the special responsibility of the USSR and the U.S. for maintaining peace, have agreed that a nuclear war cannot be won and must never be fought. Recognizing that any conflict between the USSR and the U.S. could have catastrophic consequences, they emphasized the importance of preventing any war between them, whether nuclear or conventional. They will not seek to achieve military superiority.”

Click here to find out why Joe Biden came to Moscow in 1988.