Moscow flood of 1908 that turned it into Venice (PHOTOS)

History
Russia Beyond
Moscow did not suffer floods as often as St. Petersburg did and none of them were devastating. And yet, memories of one such flood have survived, thanks to some unique photos of Moscow streets filled with water.

In mid-April 1908, on the eve of Orthodox Easter, Moscow was hit by one of the heaviest floods in its history and the worst flood the city would see in the 20th century. 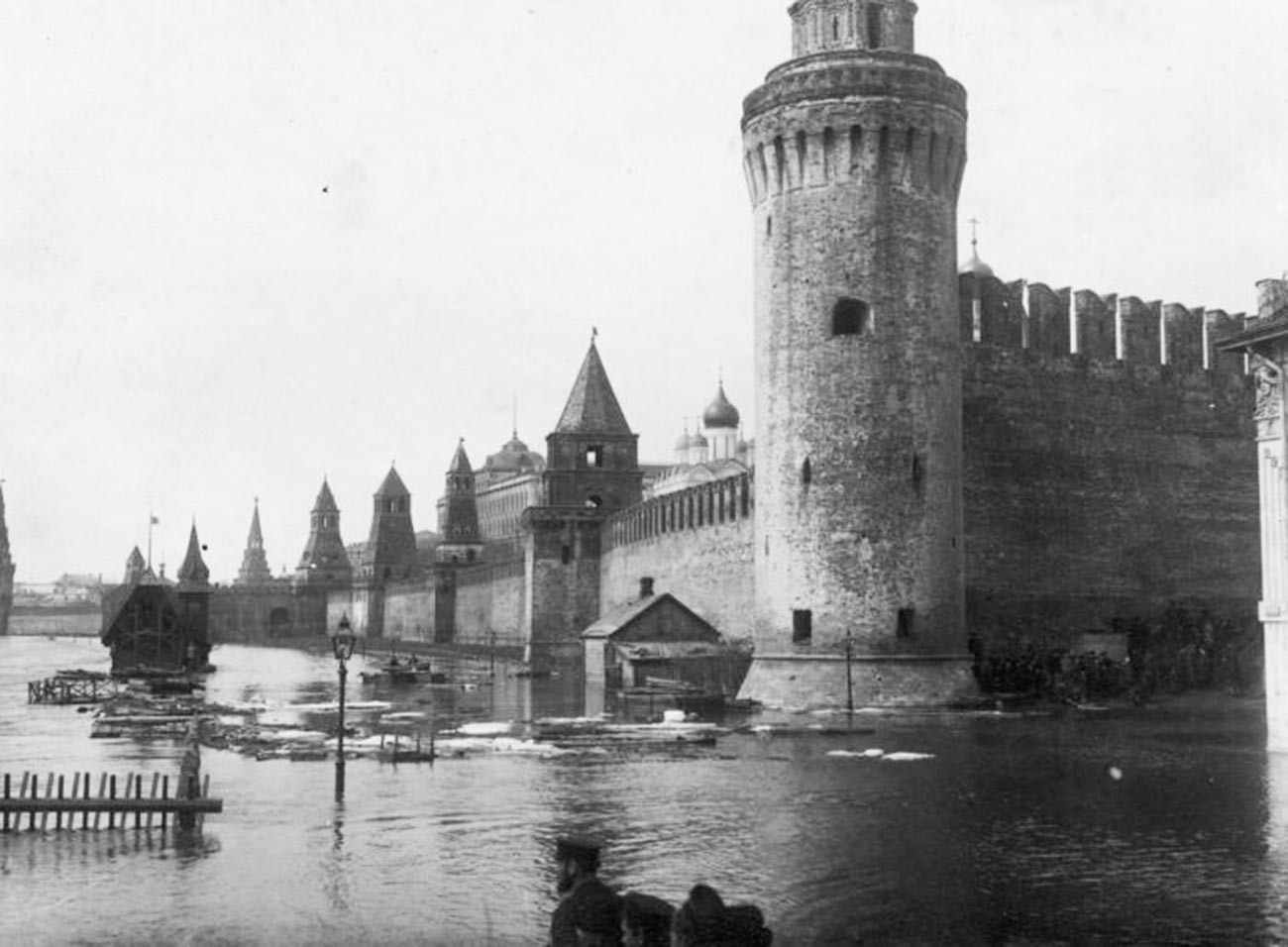 “The overflowing of the Moskva River, which came extremely late this year, took on monstrous proportions that exceeded all expectations... Five neighborhoods on the right side of the Moskva River were hit particularly badly: the second Khamovnichesky (Dorogomilovo), both sections of the Pyatnitskaya district and both sections of Yakimanskaya. This year’s flood covered one-fifth of the city in total,” said a report of the Moscow City Council. 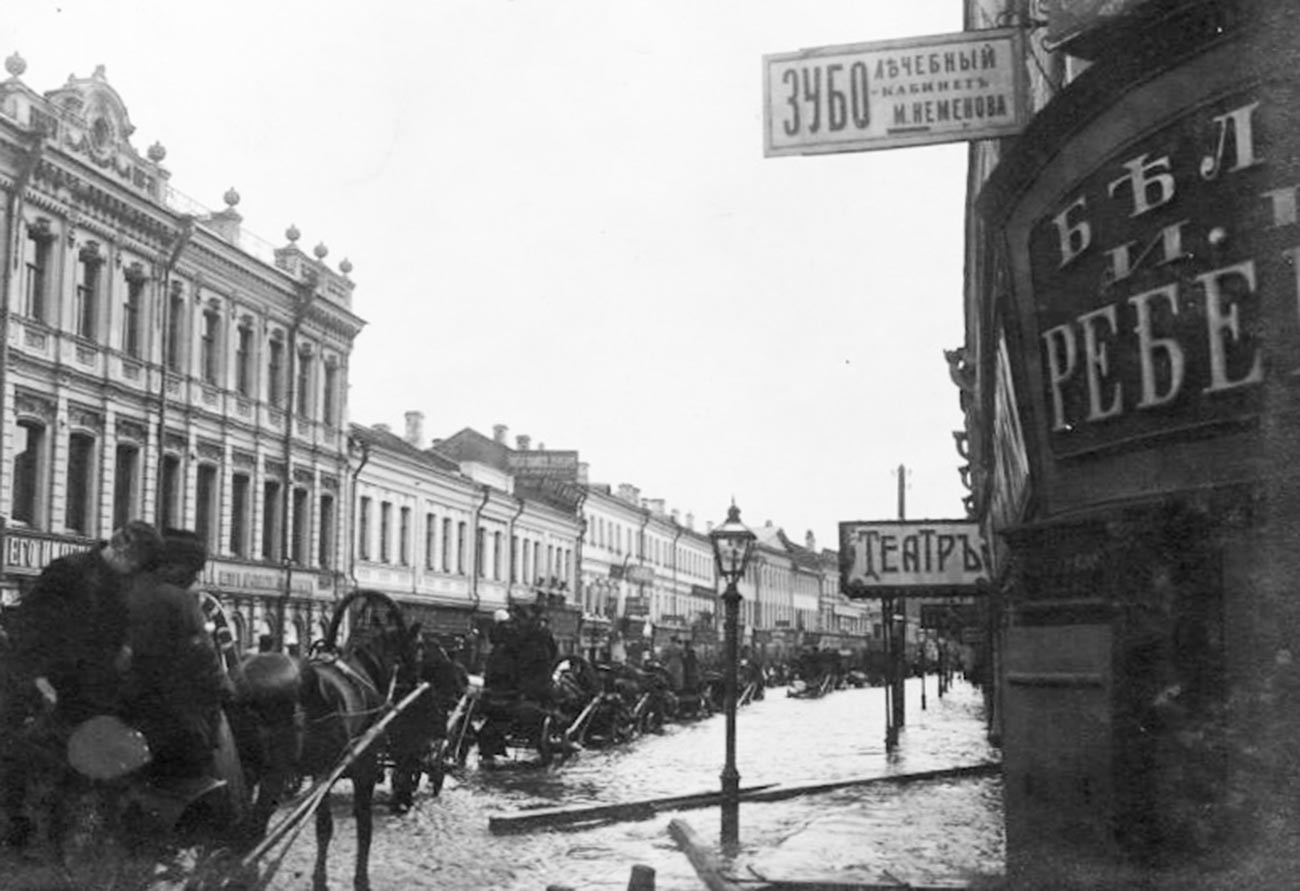 The 'Birzhevye Vedomosti' newspaper wrote: “It is, of course, yet difficult to calculate the damage. There was no time for it during the holidays. So far, it is only known that more than 1,500 houses were damaged in the flood, in Zamoskvoretsky district alone an area of approximately 4 million square fathoms [almost 20 sq. km] was flooded.” Later it transpired that, in fact, some 25,000 buildings were damaged and the flooded area was 16 sq. km. 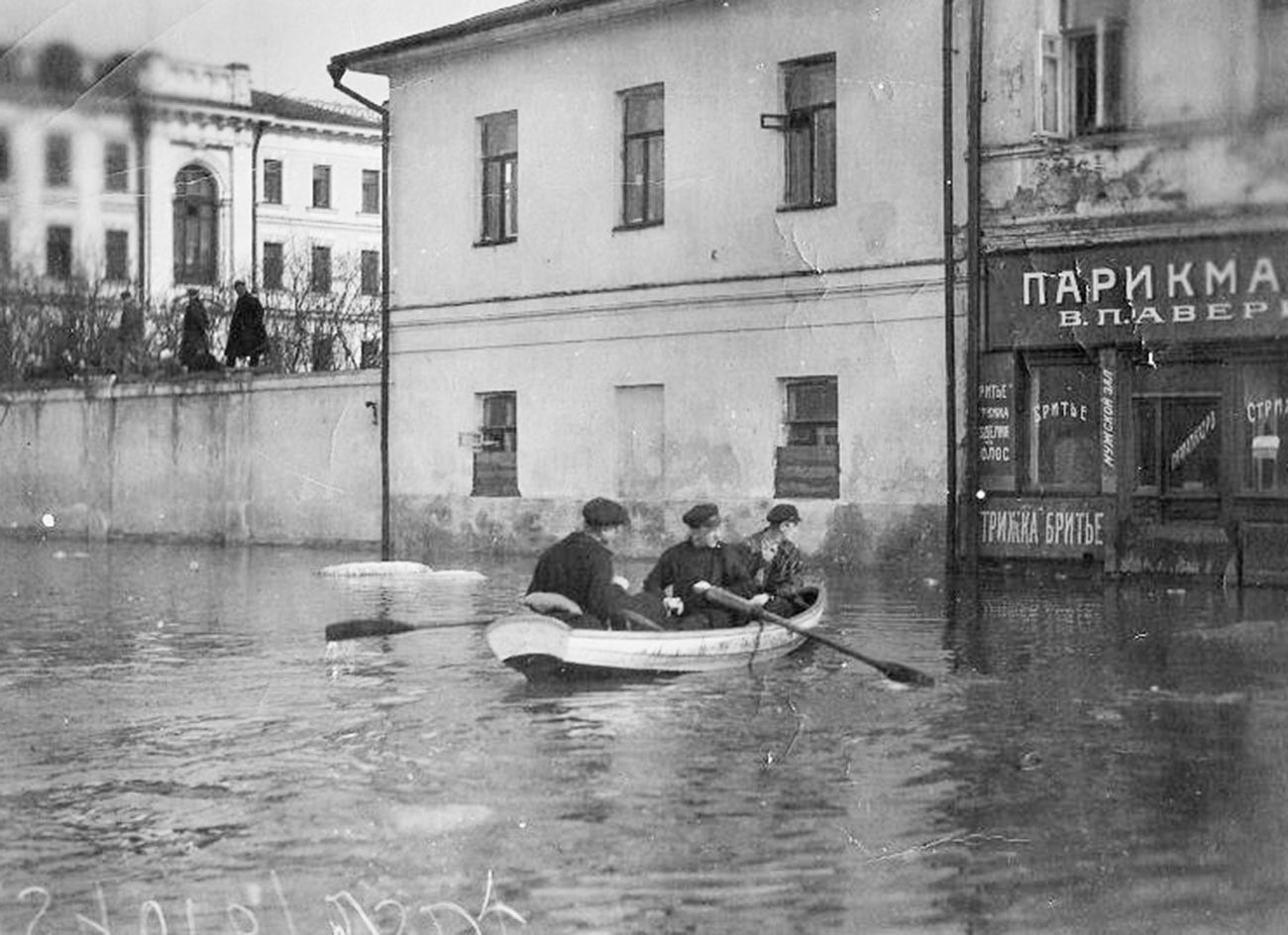 The ‘Russkoye Slovo’ newspaper offered quite a poetic take on the flood: “Every minute, there came boats carrying passengers returning from churches with lit candles. Just like on the Grand Canal in Venice. Except that there were no serenades.” People who could not get about themselves were rescued by boatmen, who were later featured on many postcards. 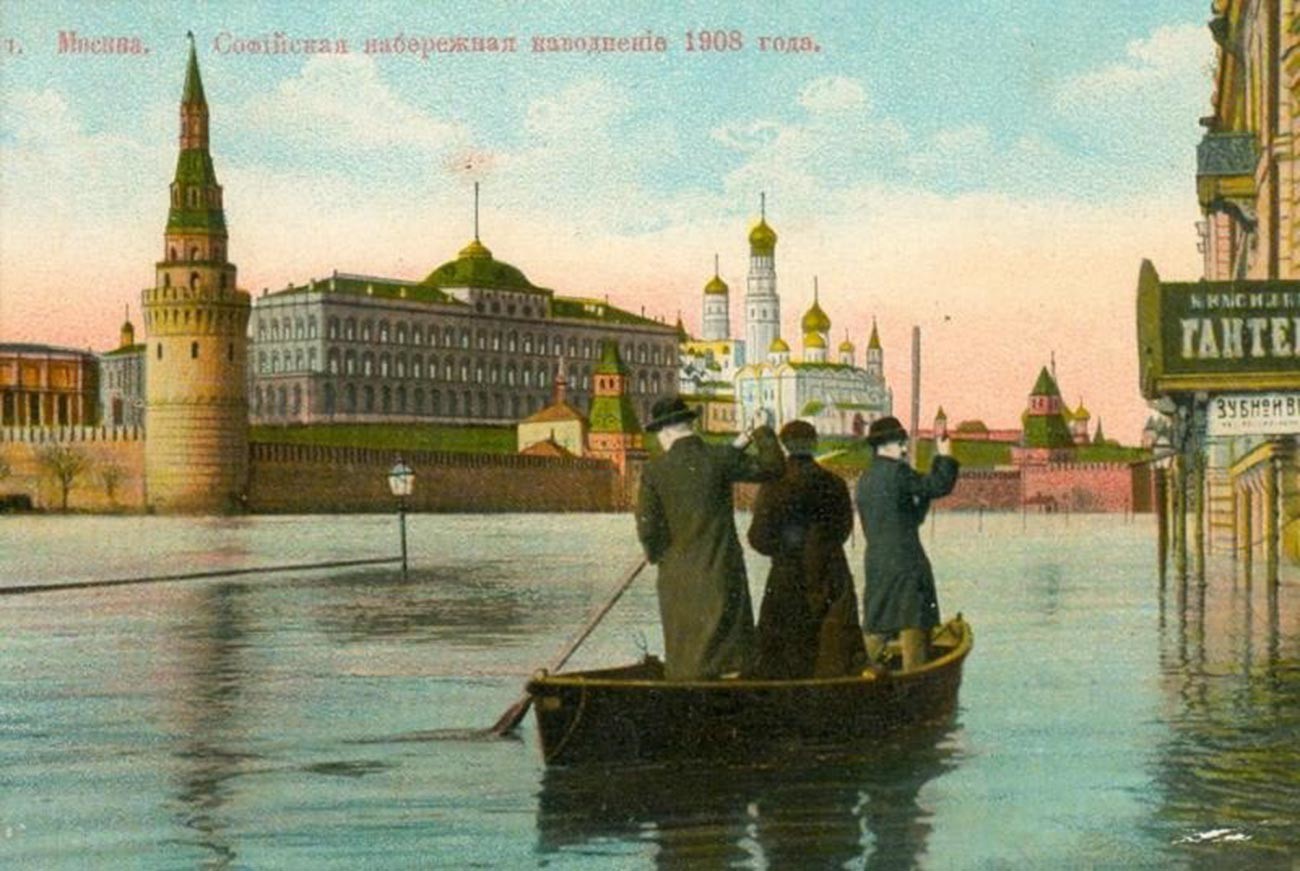 “The view of the river between the Moskvoretsky and the Kamenny bridges was particularly stunning. On the one side, the Kremlin walls, brightly illuminated by the electric lamps of both bridges, stood immersed in the water, and on the other, the beautiful houses and mansions of the Sofiyskaya Embankment were reflected in it,” the Russkoye Slovo reported. 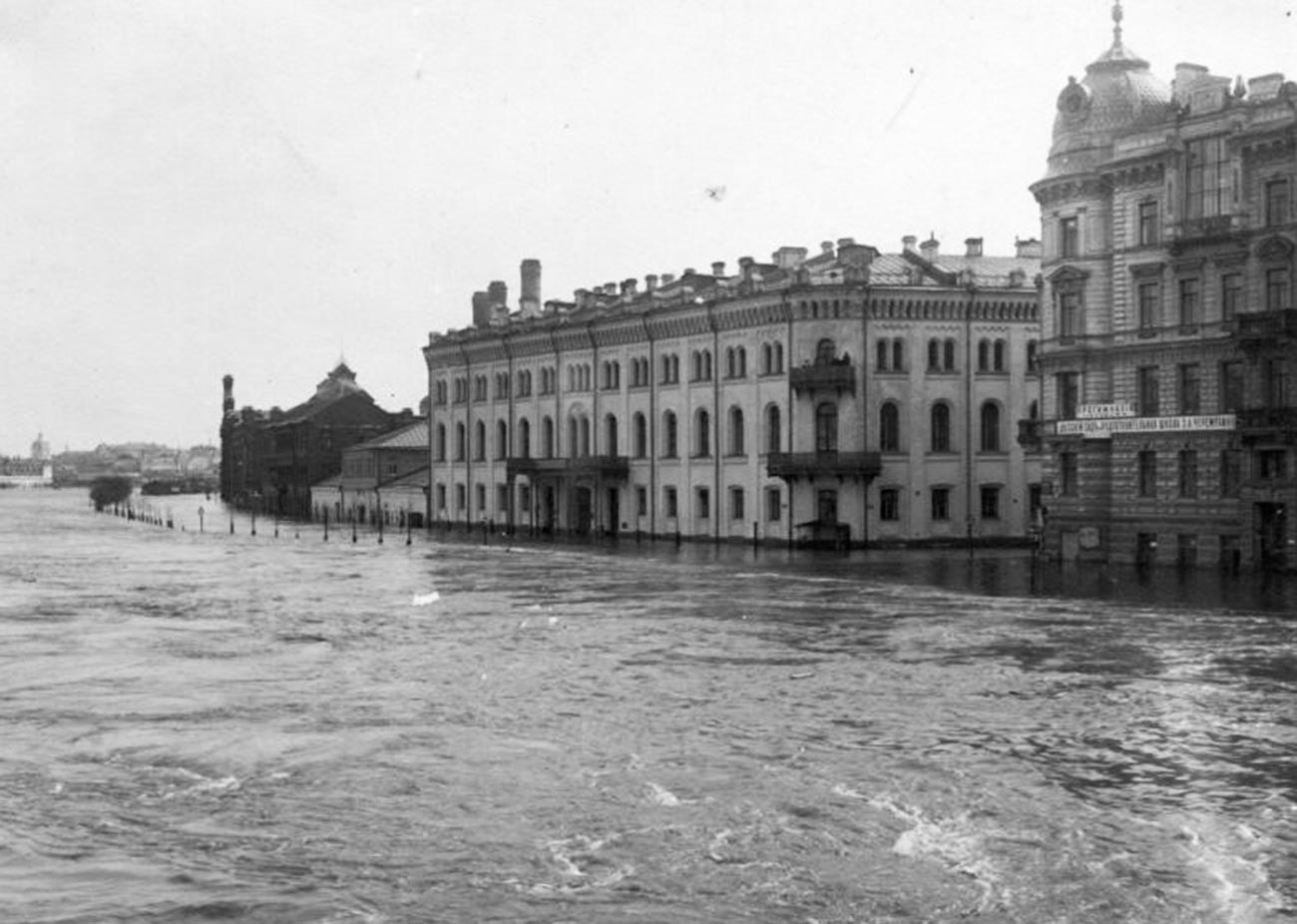 Rich merchants promptly set up a fund to help flood victims and arranged a collection of donations. As it was Easter, people donated money willingly and there were many worshippers at church services, so money was collected really quickly. 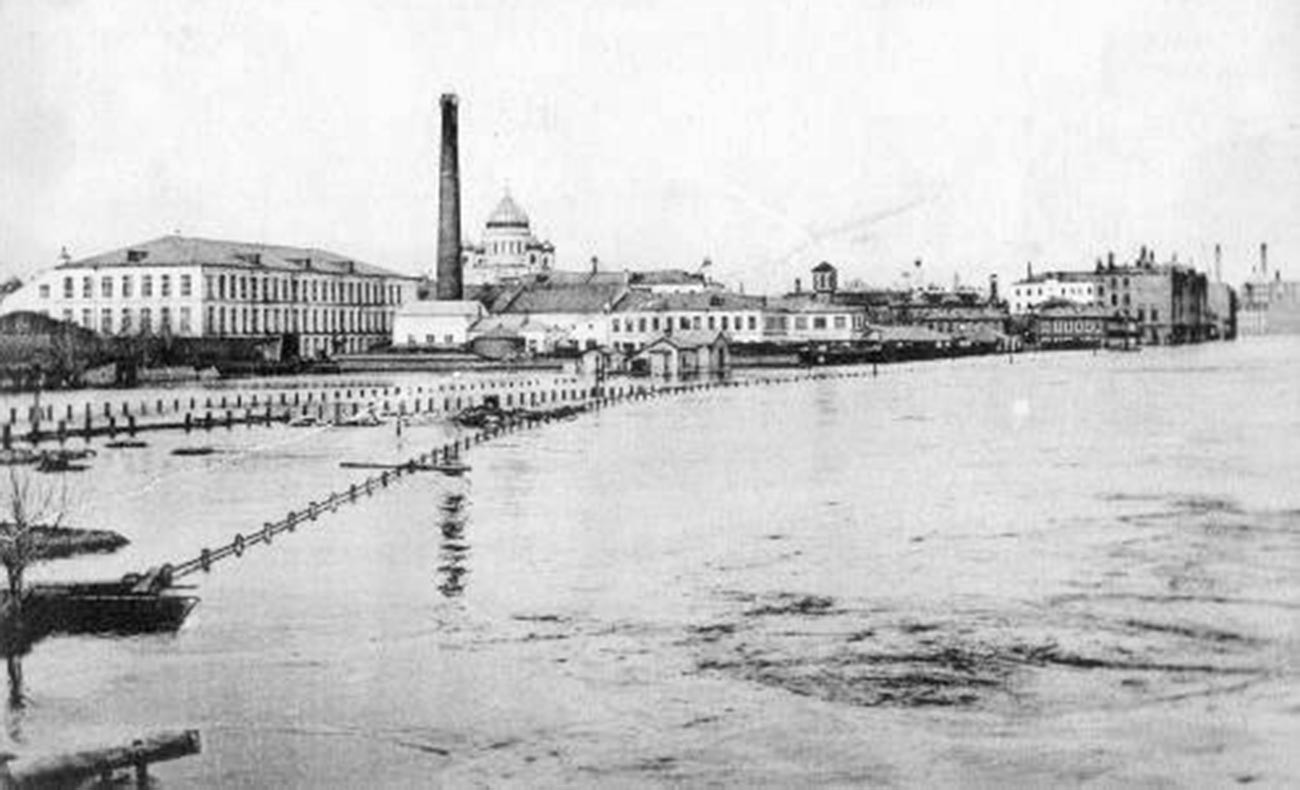 Another postcard issued after the flood depicted residents of Ushakovsky Lane (in present-day Khamovniki district) gathered on a roof during the flood and celebrating Easter there. 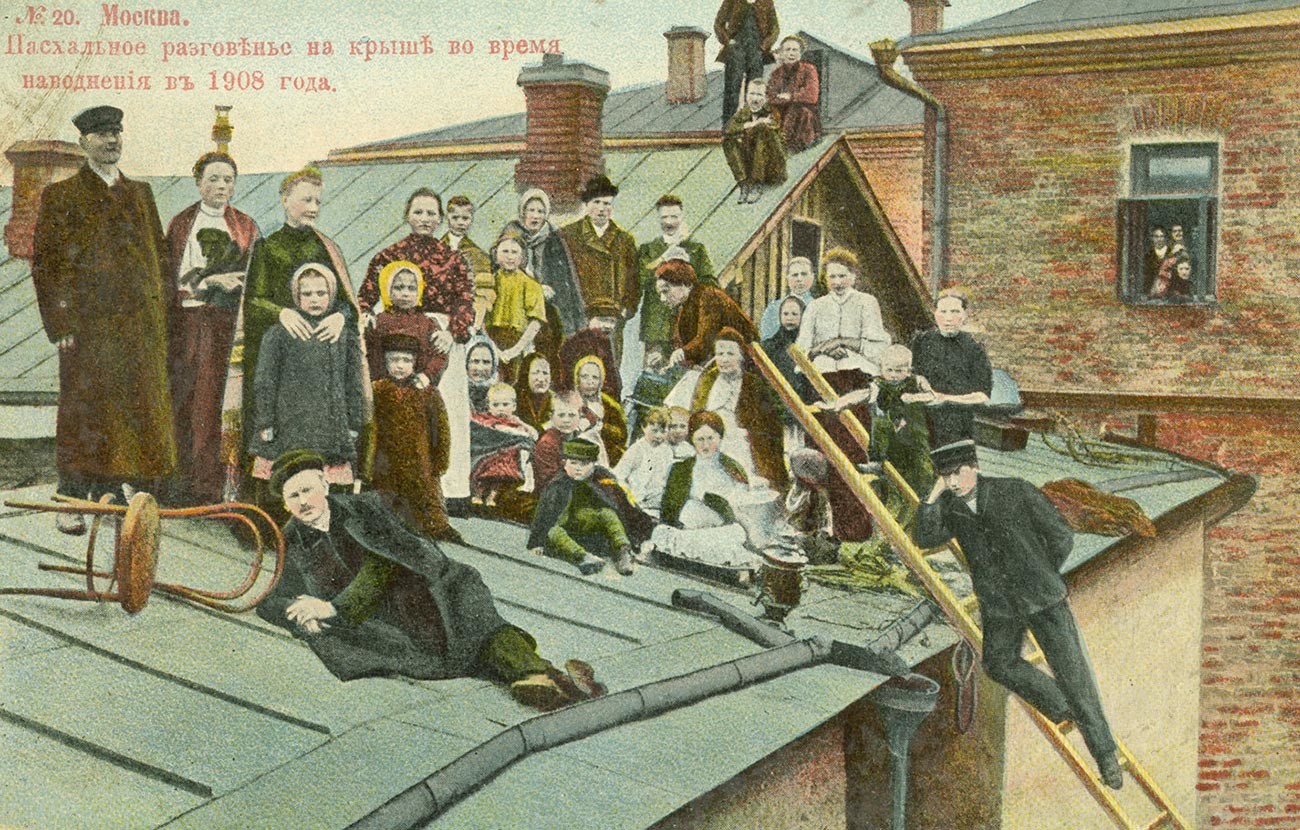 Eyewitnesses reported that the water in the Moskva River turned yellow as a chemical plant had been flooded and large stocks of yellow paint had dissolved in the water. The foundations of some buildings remained yellow when the water subsided. 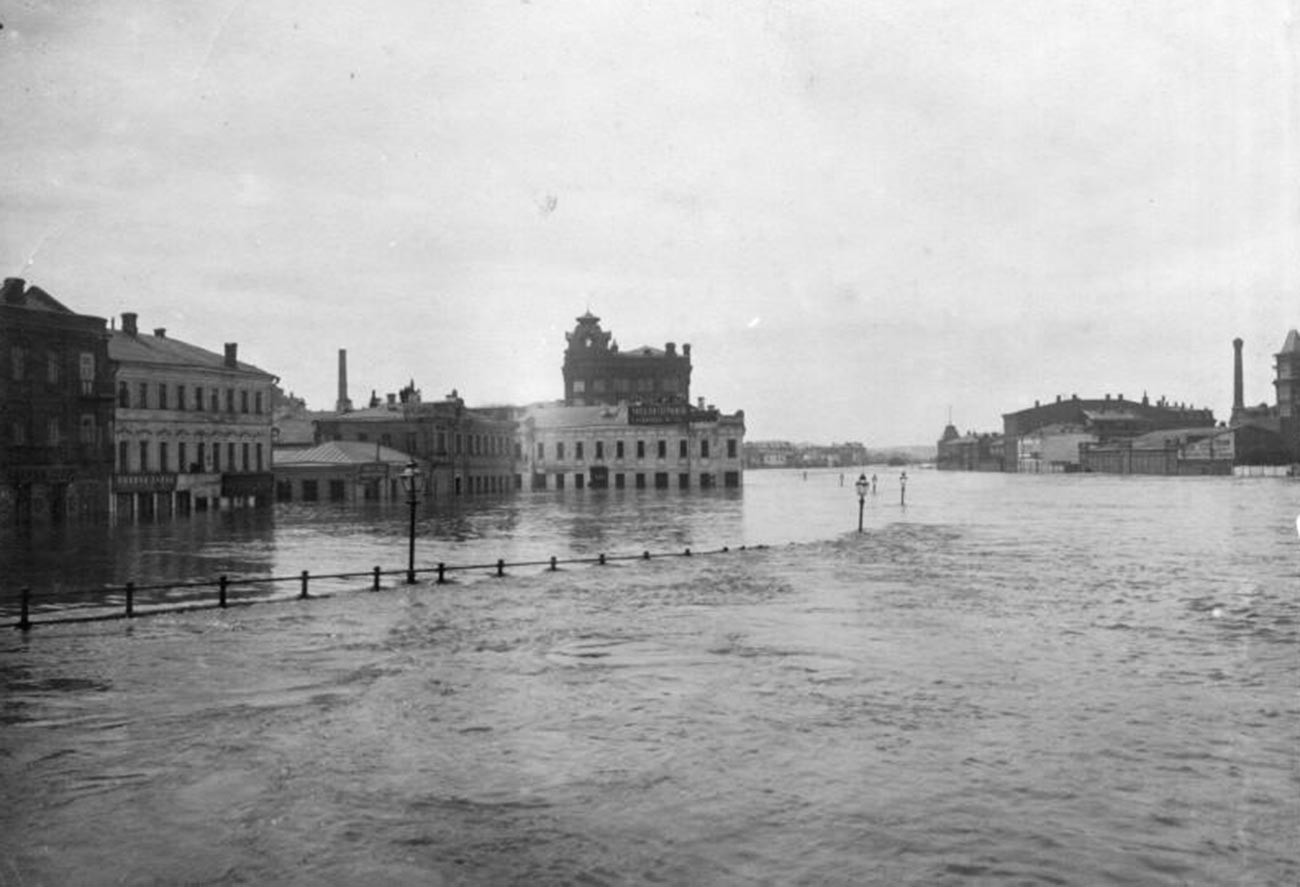 More than 100 km of streets were flooded. The photo above shows a street in the Zamoskvoretsky district of Moscow. Damages caused by the flood were enormous. For example, Gepner’s sugar factory was hit hard and more than 5,000 tons of sugar ended up dissolving into the Moskva River. 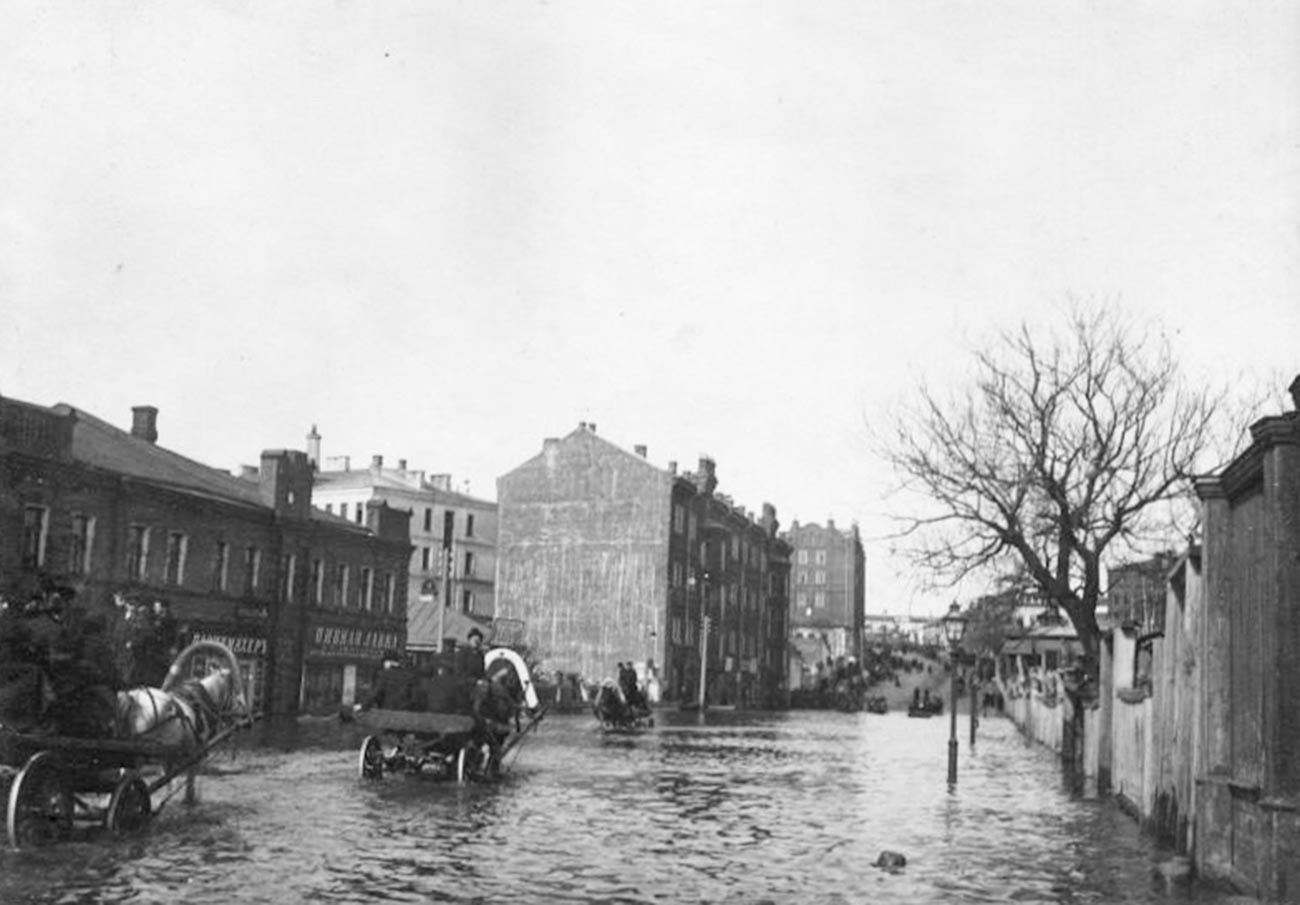 In some places, water rose by more than nine meters. A popular venue for outdoor festivities - Vorobyovy Gory (Sparrow Hills) - was also flooded. As you can see in this picture, wooden houses were flooded right up to their roofs. This photo was taken from the side of the Novodevichy Convent. 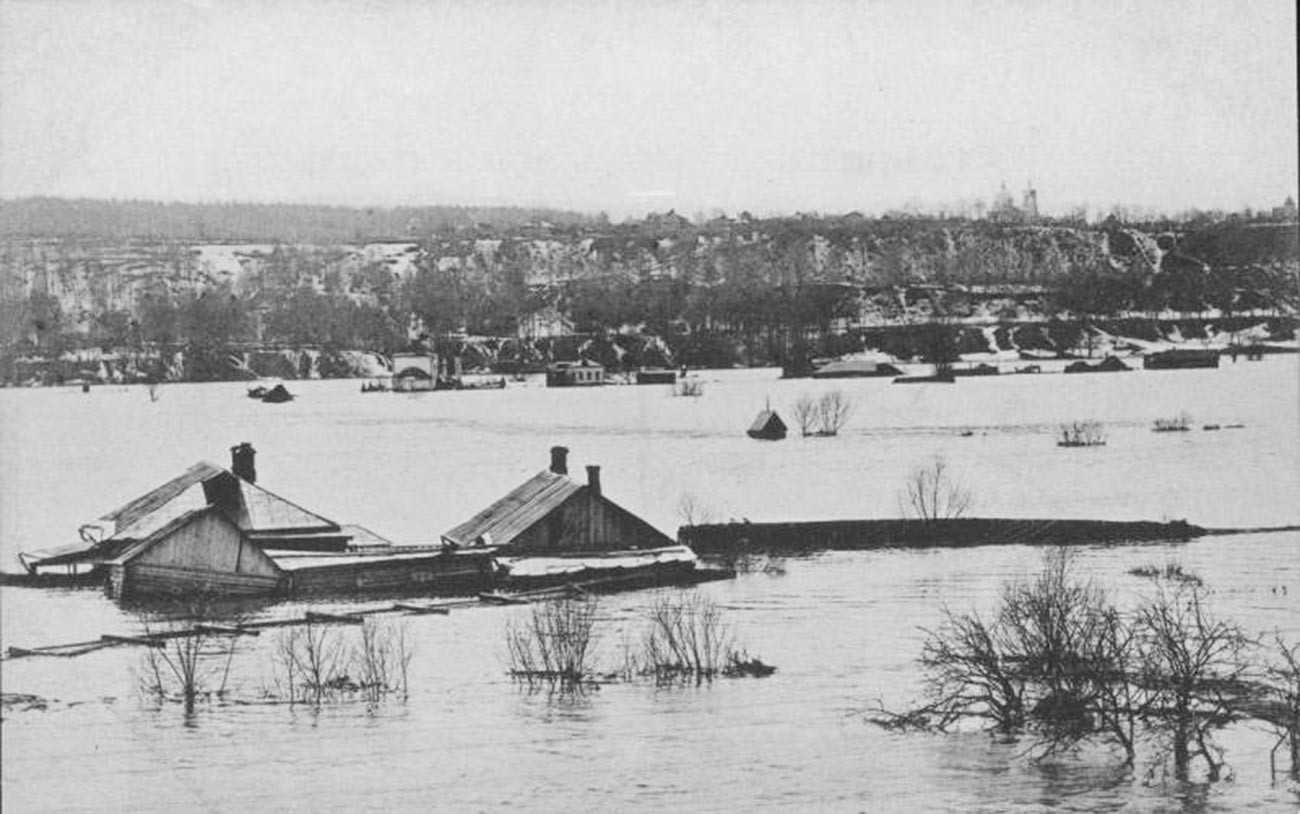 These are flooded streets in the Yakimanka district, not far from the Kremlin. The Tretyakov Gallery located nearby was saved, thanks to a brick wall that had been built around it. 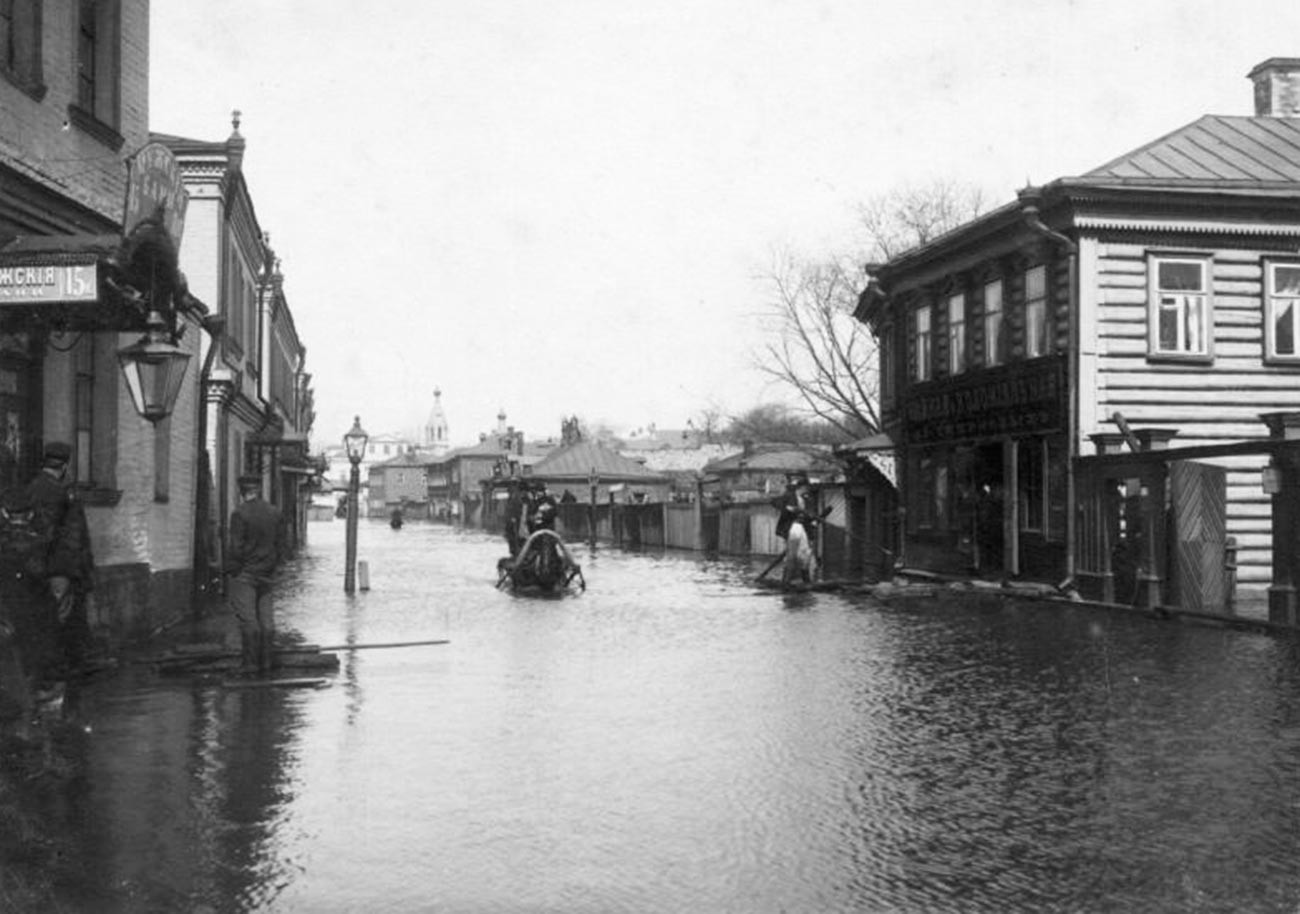 “On the first day of Easter, Moscow was plunged into darkness. A power station had been flooded and it was only on the second day of the festivities that a cable was brought from the city station and illumination restored to Tverskaya Street and to three theaters - the Korsh Theater, International and Novy – although the matinees on the second day still had to be cancelled,” the Russkoye Slovo newspaper reported. 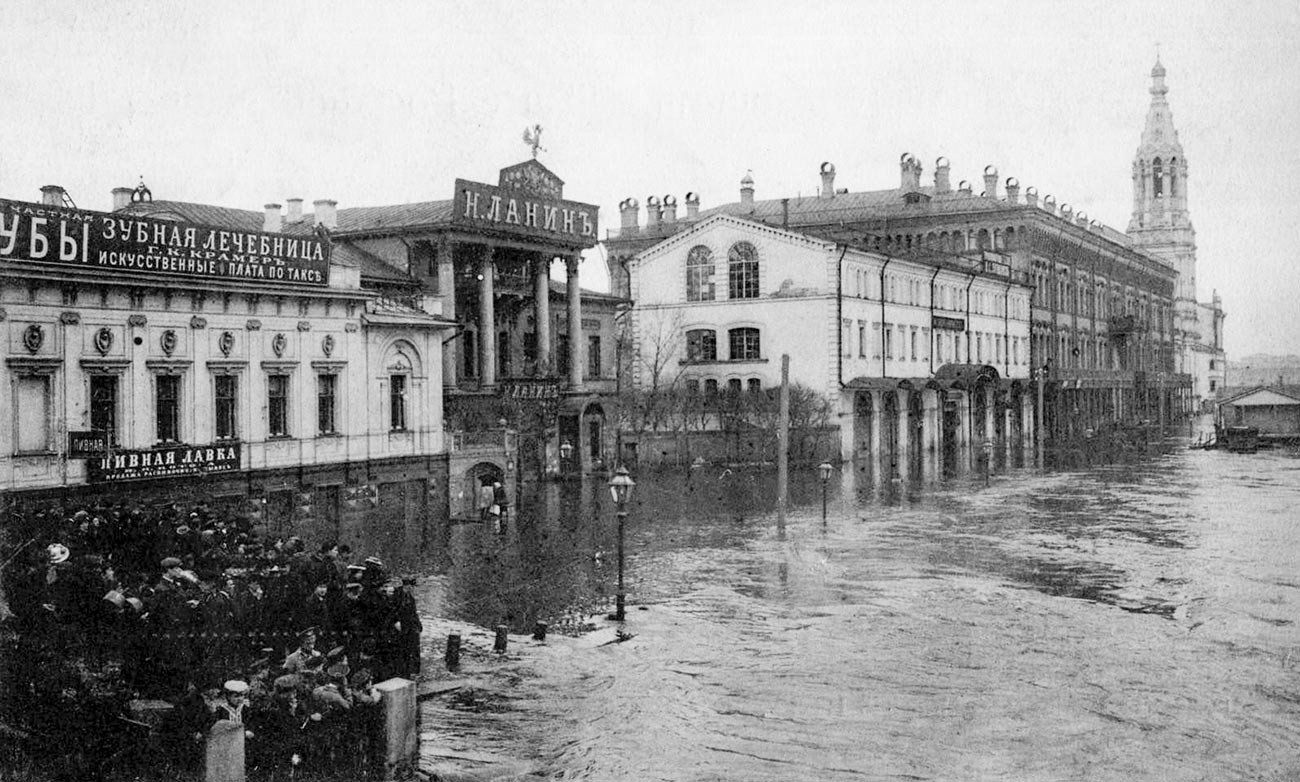 This view of Bolshaya Dorogomilovskaya street featured on a postcard from the series ‘Historical Moscow. Stories of Moscow Life’. 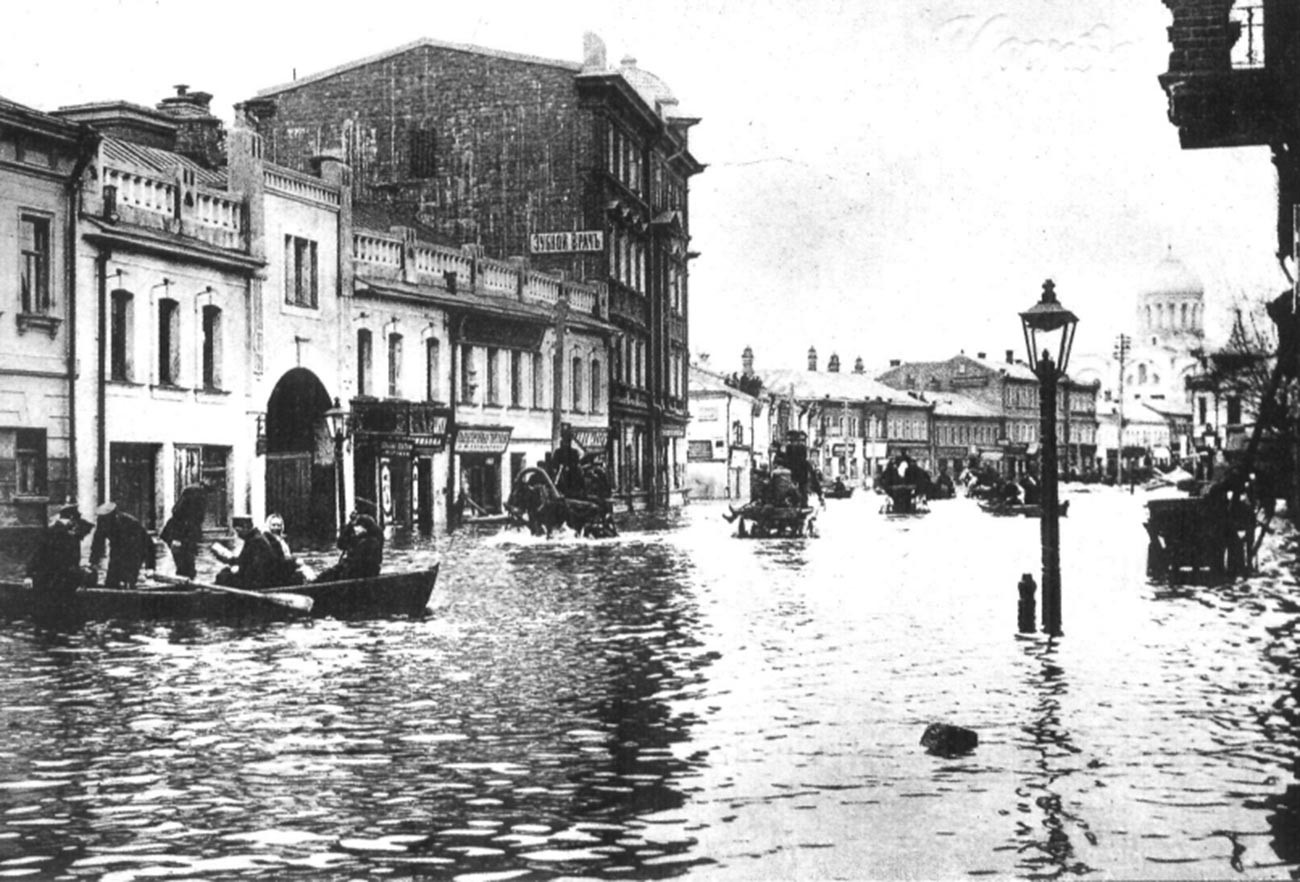