How the USSR tried to scare the U.S. with FAKE weapons - and it worked (PHOTOS) 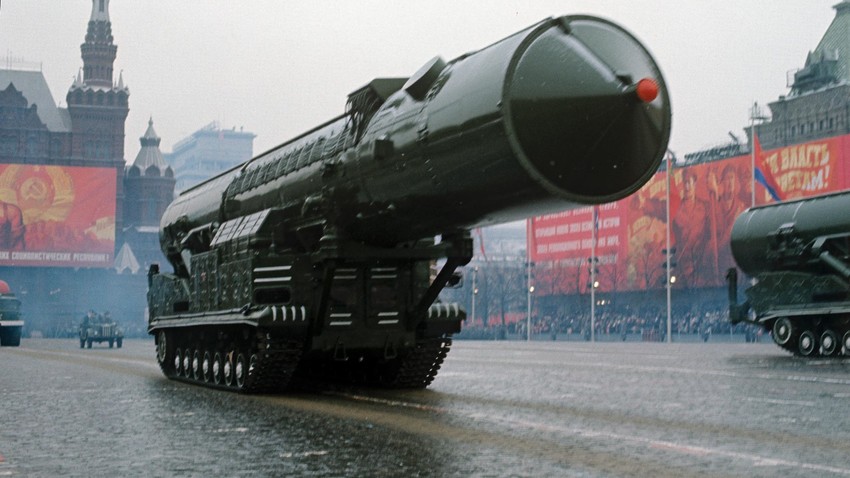 Yuri Abramochkin/Sputnik
The arms race between the two superpowers in the 1960s had them use every means at their disposal, every scare tactic in the book. However, few knew at the time that the Soviets were also expert bluffers.

The Red Square. 1965. Gigantic rockets with nuclear warheads slowly passed by stalls, filled to the brim with spectators, including foreign ambassadors. Their size alone was enough to strike the fear of God into a Soviet - so it’s a safe bet that the feeling elicited in the attending foreigners must have been a similar one, if not worse. 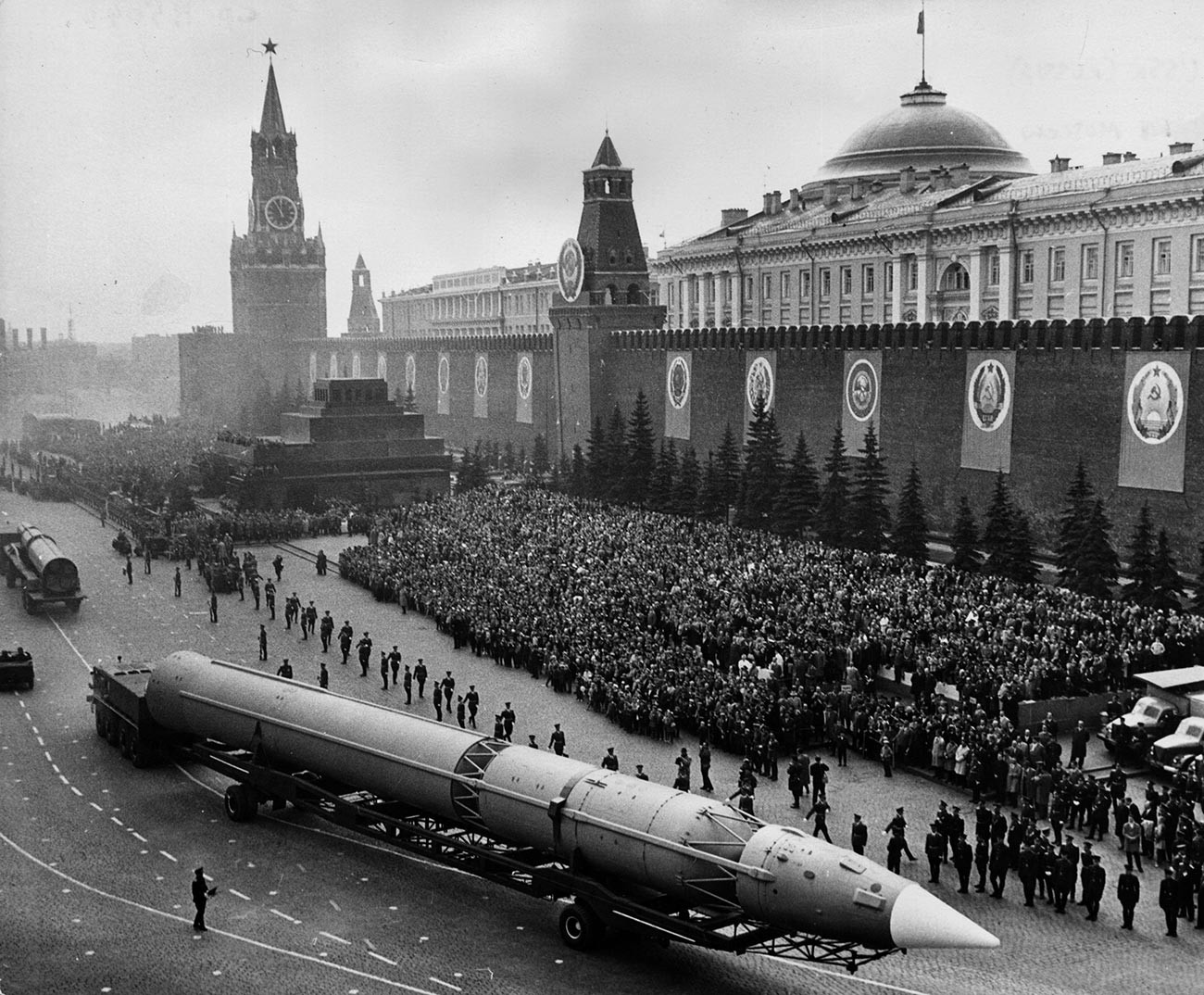 A Russian Intercontinental Missile crossing Red Square during the military parade in Moscow marking the 20th Anniversary of the end of the war in Europe.

Soviet radio commentators then read out a pre-prepared speech: “The parade of considerable military might is concluded with gigantic defense missiles. Their maintenance is entirely automated. There are no limits to what these missiles can do…”

This was undoubtedly another triumph for Soviet military technology. At least that’s how it was presented. Massive weapons with huge barrels, ballistic missiles that could reach anywhere, a “nuclear deterrent from space” - as soon as the technology made its way onto the Red Square, it also ended up in international headlines. Little did people know that there were no weapons there on that day - only fakes. 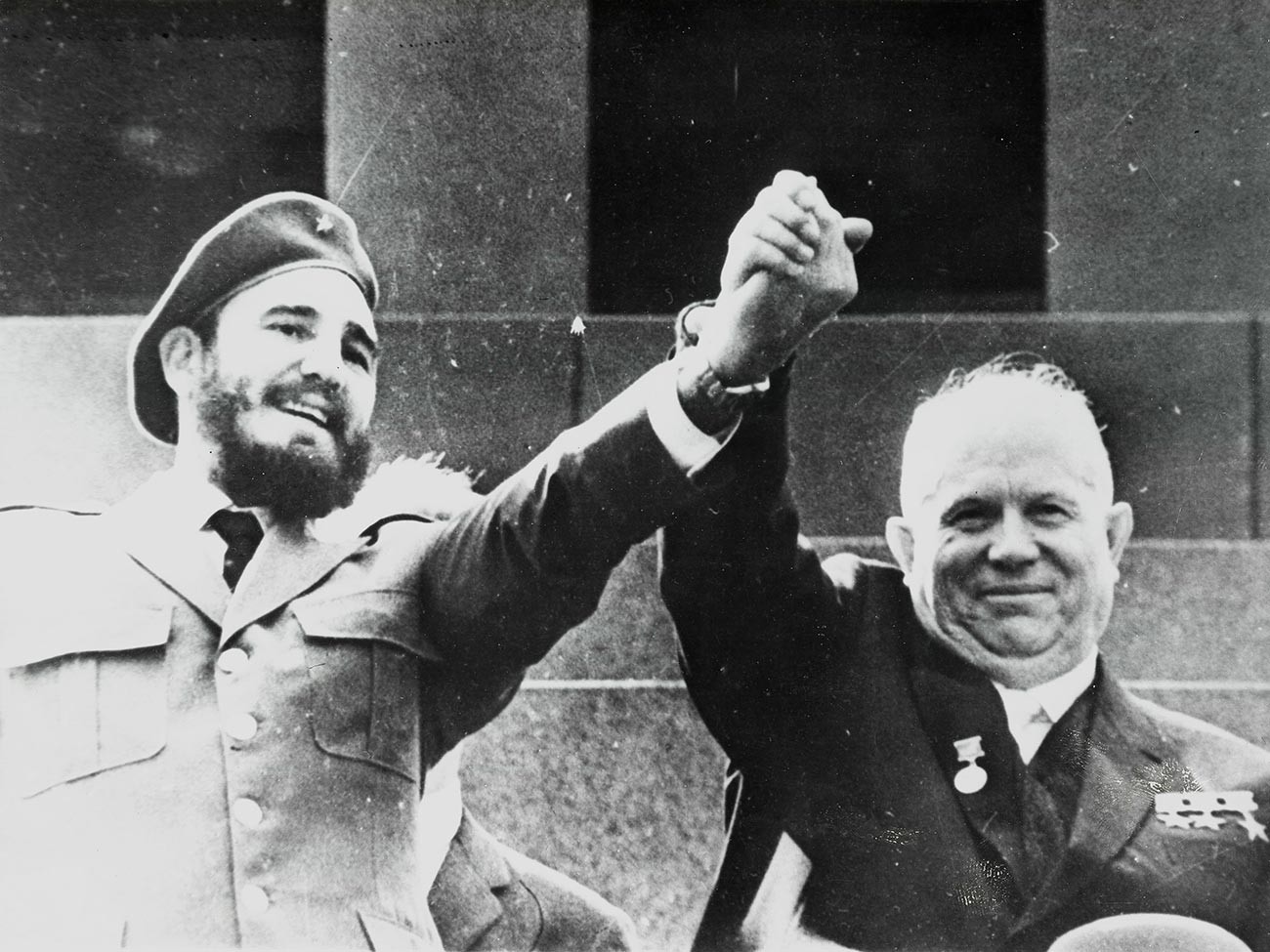 Nikita Khrushchev and Fidel Castro while watching the May Day Parade in Red Square.

Why the country needed it

That question was answered after the breakup of the Soviet Union by Vladimir Semichastny, a KGB chairman and one of the organizers of Nikita Khrushev’s removal from power. “Missiles aroused great interest in the 1960s. Every mention of one - including their sheer look, had people glued to them, holding their breath,” Semichastny wrote in his memoirs, ‘USSR Special Services in a Secret War’. 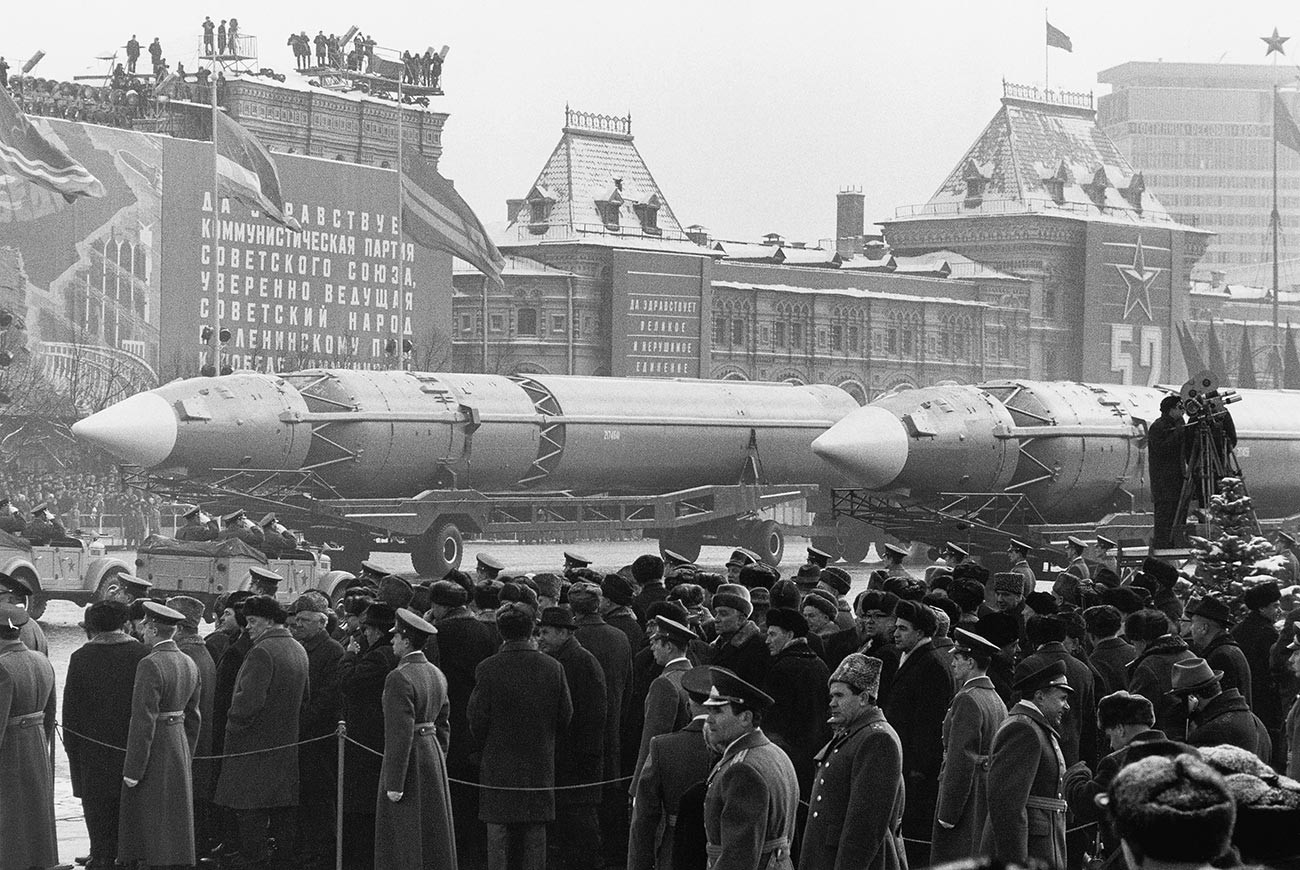 “Regularly, about once, twice or three times a year, we officially claimed to have mastered some new missile technology. Following those announcements, we’d present them on the Red Square during parades. Only a very small circle of people was aware that a number of these new missiles were simply fakes - a bit like a ‘Potemkin village’ - and that they absolutely have no ability to fly. The models being pulled by the tractors weren’t missiles - they were replicas,” he confessed. 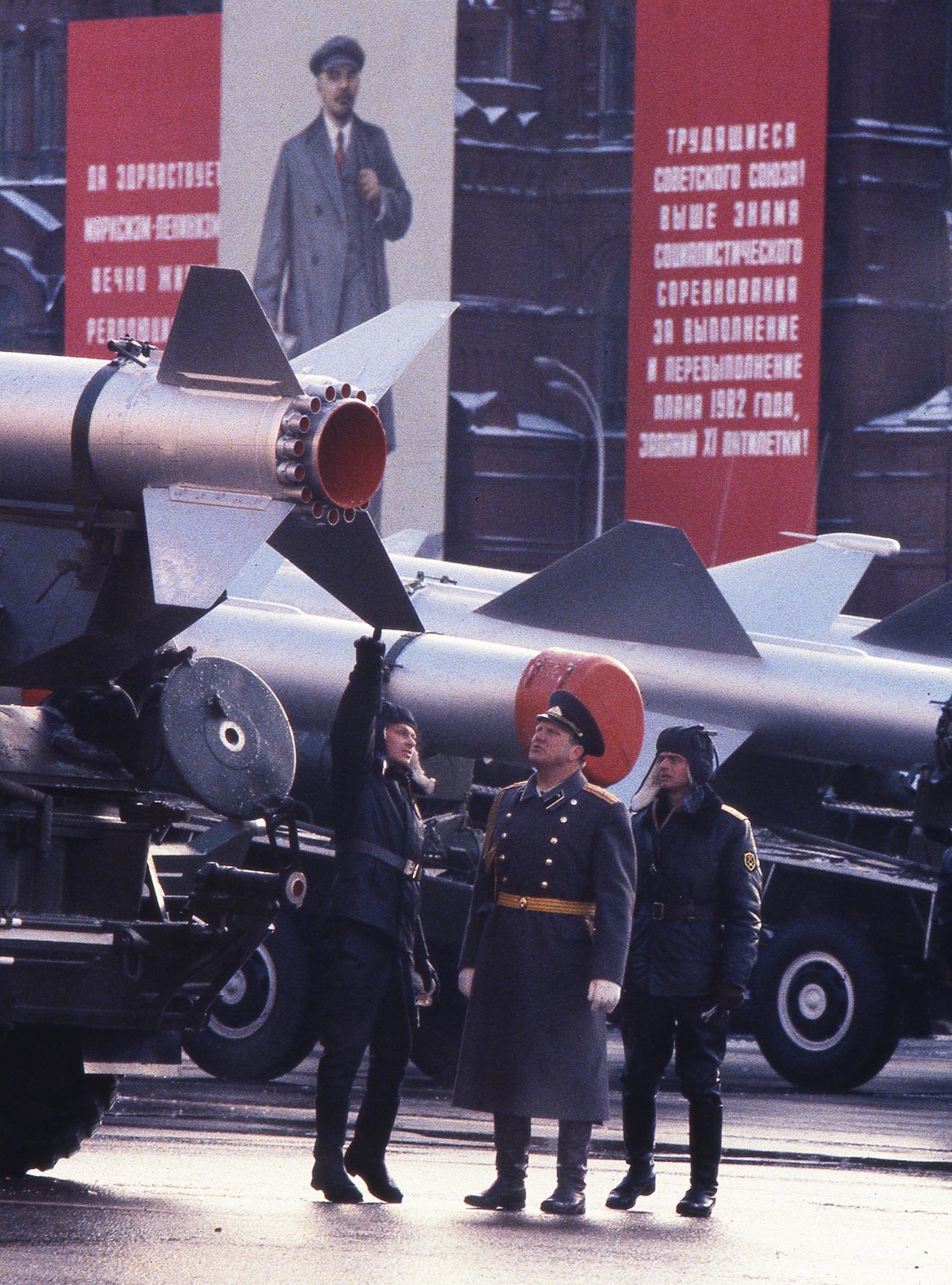 As to why the theatrics were necessary, Semichastny explained that Western special services could not easily judge the Soviet military’s potential back in the day, because it was a closely guarded secret. All of the most powerful toys were kept in underground hangars and no spy satellite would have been able to take a closer look. Nobody knew what or how much of it was there. The only way to take a peek were the May 1 military parades, then Workers’ Solidarity Day on November 7, the Day of the Great October Revolution, when the country’s main square saw the best of what the Soviet military-industrial complex had to offer (the May 9 military parade would only be held on anniversary dates).

The choice to pull the wool over the enemy’s eyes was made knowing they could do nothing to verify what was actually taking place.

Everything was scripted down to the smallest detail. The campaign itself was spearheaded personally by First Secretary Khruschev. Part of the performance was a fiery speech of his in 1962, at the Kremlin Palace, where he announced the GR-1, the so-called “global missiles”. 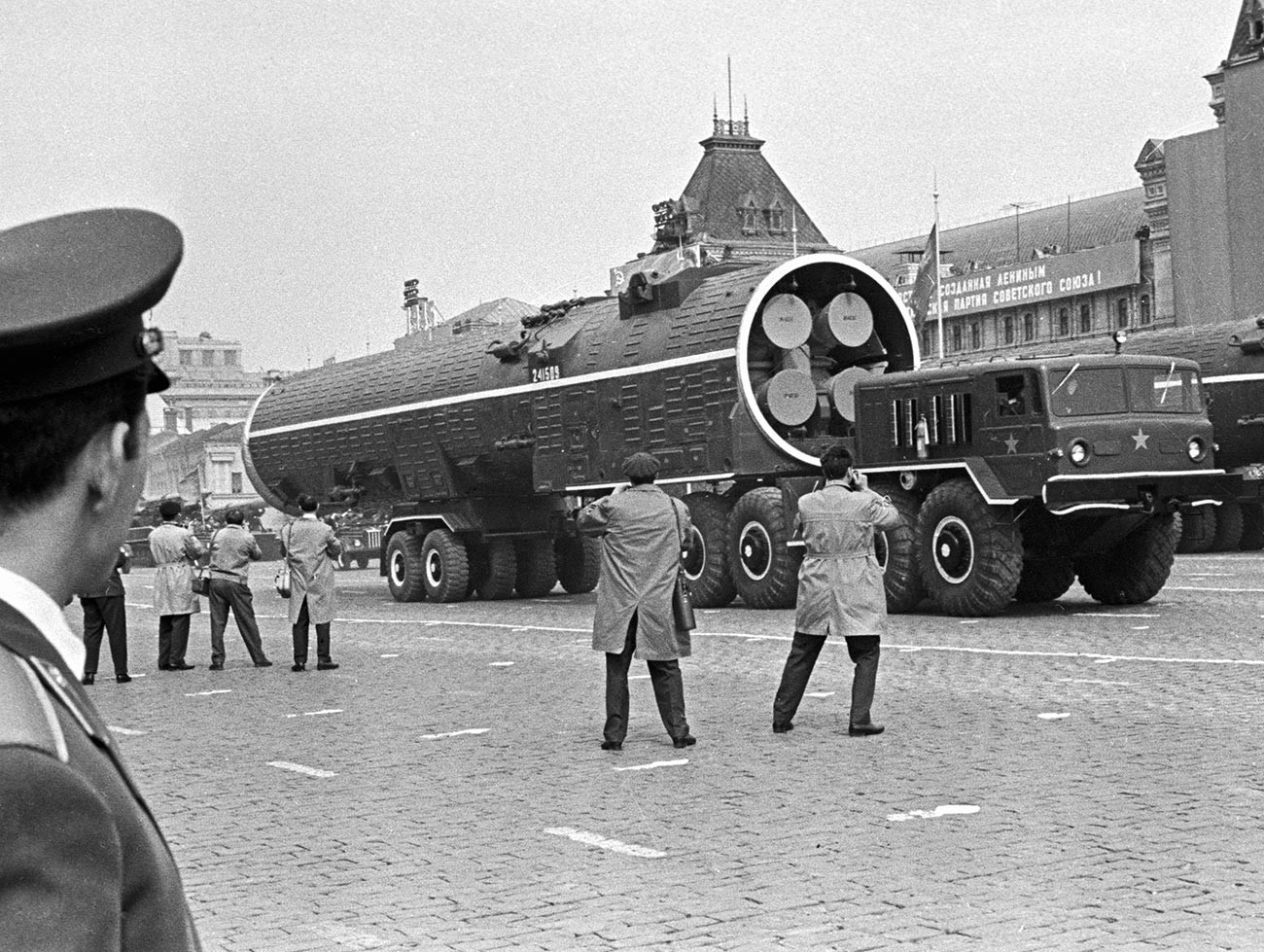 The concept of a global missile actually took its cue from the U.S., whose version never materialized, due to it not being strictly necessary: owing to the proximity of NATO countries to the USSR, shorter-range intercontinental ballistic missiles would have done fine. The Soviets, however, did not have the advantage there and decided to get to work. The idea was to put a nuclear warhead in orbit with the potential to strike a target at will. The main feature of such a missile would be the ability to reach any target on Earth, no matter how far. 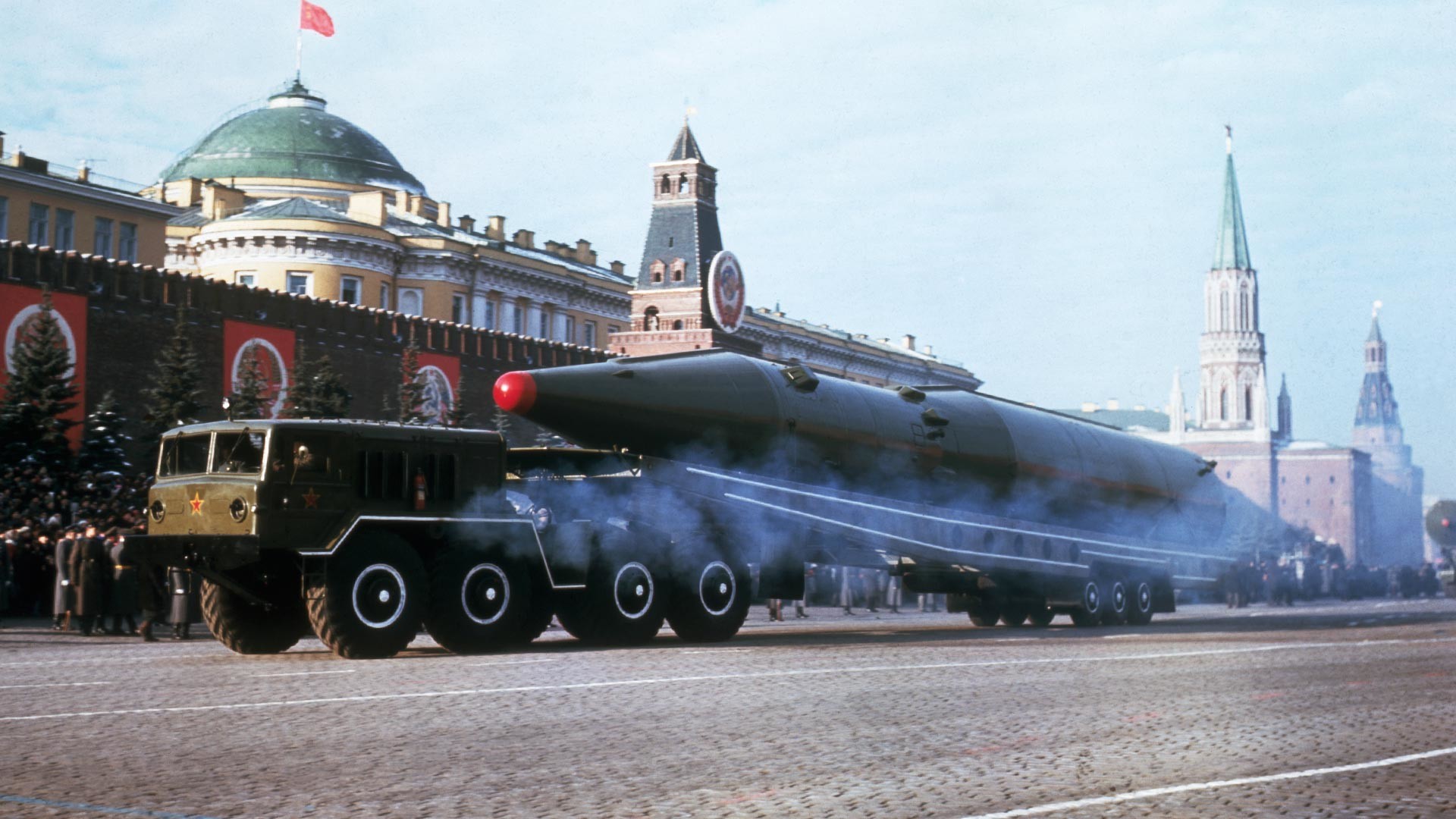 “Possessing a global missile made every other deterrent obsolete. Global missiles could not be detected in time to take any preventive measures,” Khruschev then said of the GR-1, as though it was a done deal. In actuality, he was bluffing, seeing as - at the time of the speech, the construction bureau hadn’t even prepared a research proposal. Speculating on what such a missile could or could not do was, to put it mildly, a bit early.

That didn’t stop the speech from having the necessary effect, with foriegn intelligence seriously starting to search for information on the GR-1, giving it the code name ‘SS-X-10 Scrag’. When the alleged working prototype was rolled out onto the Red Square in 1965, there were no doubts left in the Americans’ minds: the Soviets had done it! 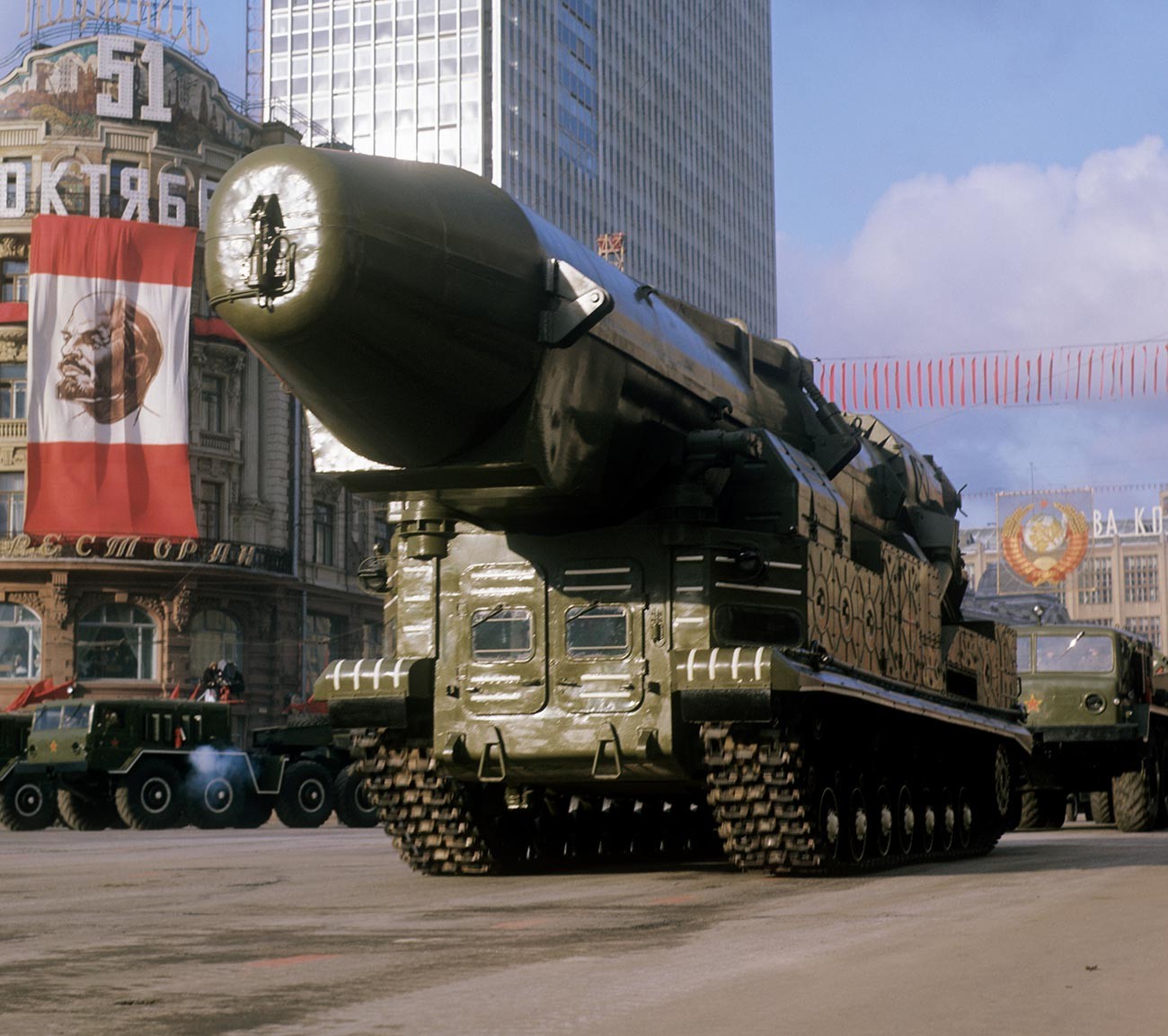 Aside from that, any such mystification was always concocted as a play in several acts. After a parade, the replica would be taken to one of Moscow’s train stations in full knowledge that foreign embassy staff would be watching. This meant that they’d be trying to assess which direction the new weapon would be headed i.e. which part of the country it was meant to “fortify”. The Kievsky Train Station meant that it would probably be guarding bases in the east. 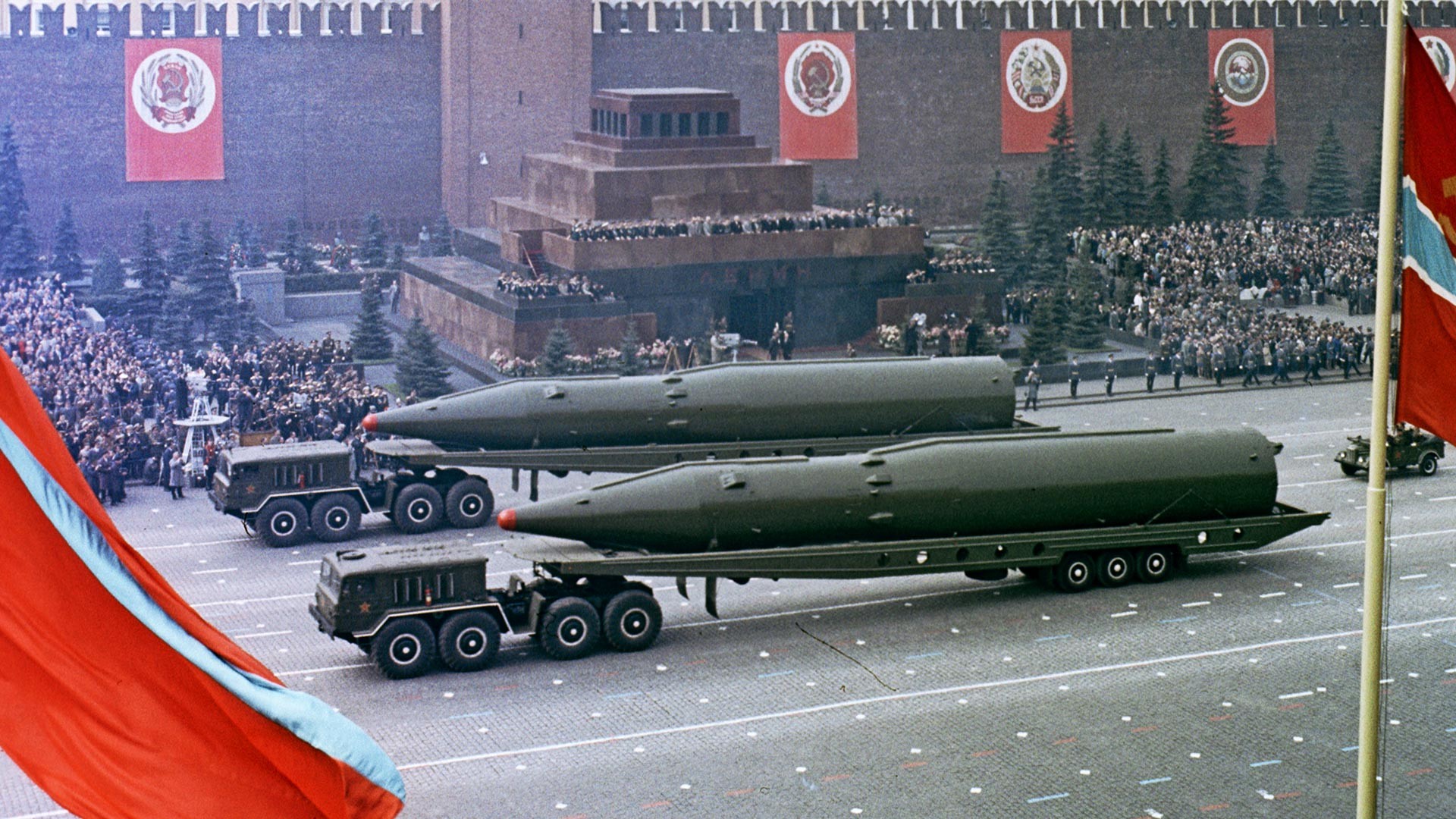 “Listening in on phone conversations between military attaches and finding out about any planned work trips in pursuit of the missile, we were able to determine how successful our plan had been. In this way, foreign agents let us know what worked and what didn’t,” Semichastny wrote.

The projects that never came to fruition

The global missile was just one example of the Soviets’ campaign of misdirection. A similar story concerned the RT-15 and RT-20 missiles. The self-propelled weapon carried an 18-meter missile that struck fear into people’s hearts with its looks alone. But it failed during tests and was never included in the arsenal. 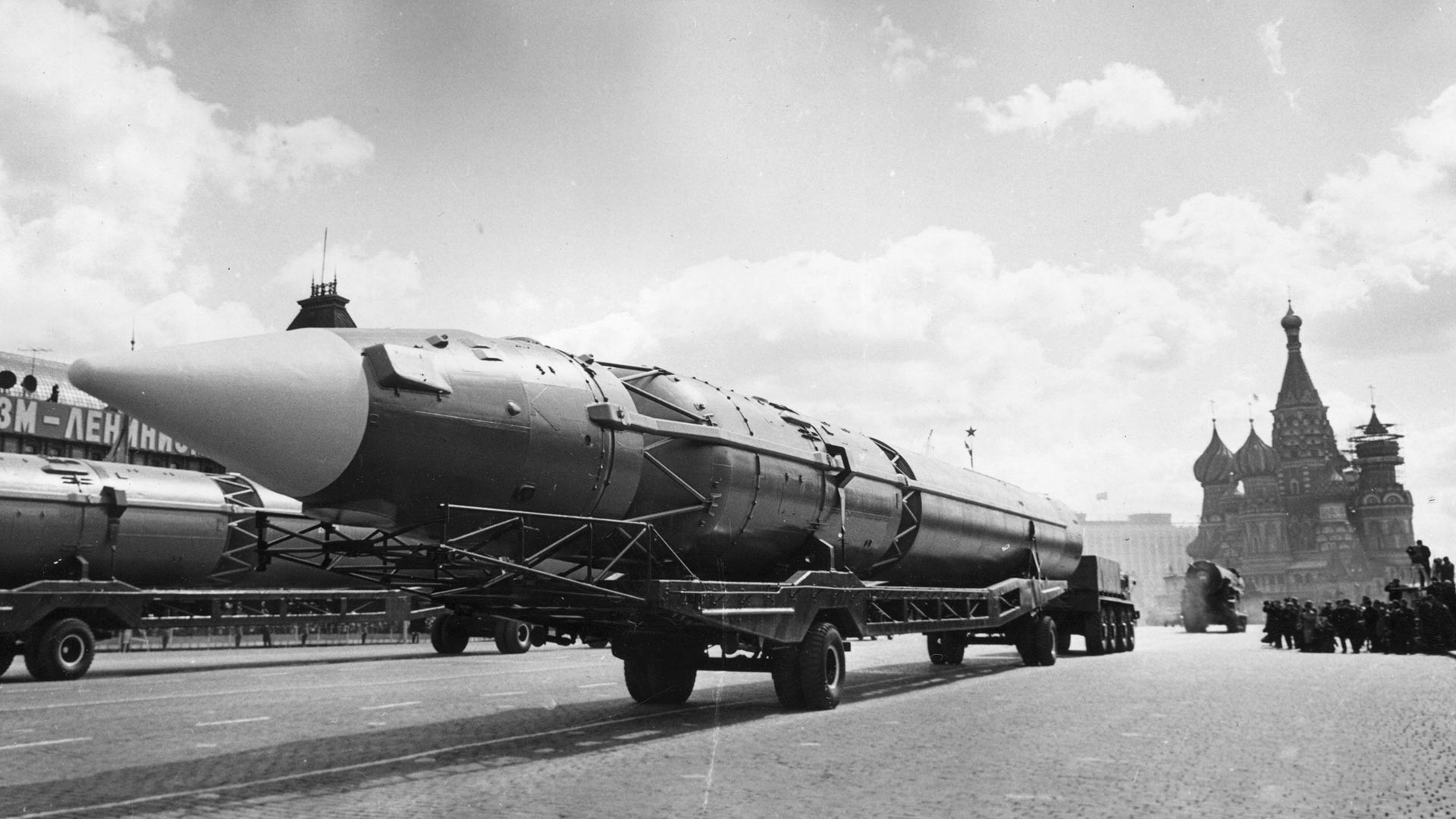 The same can be said of the 2B1 self-propelled heavy artillery - the ‘Oka’. The gigantic tracked mortar was capable of launching a projectile at distances of almost 50 kilometers away. But the recoil was so strong that it disabled the engine and transmission. The tracks themselves could not withstand the sheer weight and had to be swapped out for new ones every 20 km. Due to these shortcomings, the nuclear mortar was virtually unrealizable. In May 1961, only six systems were shown on the Red Square, then quietly taken apart in July of the same year.

During the 1954 parade, the M-4 bomber was presented to the world, allegedly capable of carrying a nuclear payload and possessing a chassis that enabled it to lift off from ice in the Chukotka district - right next to the United States. However, there were many drawbacks and the plane was repurposed as a refueller. 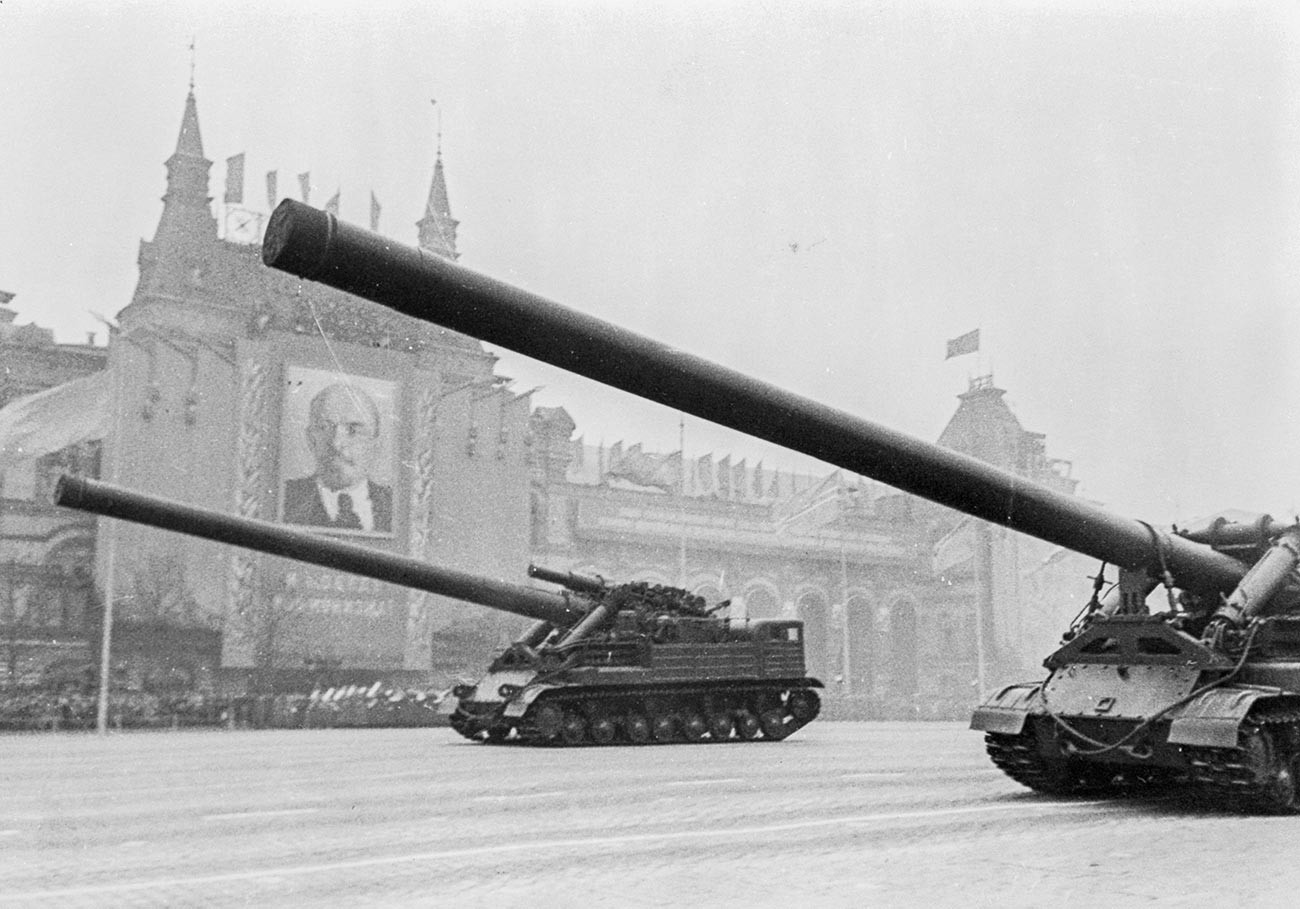 As for the GR-1, there was a delay in the production of engines and there were a series of failures on the way to physically getting it to the point of liftoff. In any case, none of that would have been necessary: the bluff had worked, with Wasington agreeing to sign the Treaty on the Non-Proliferation of Nuclear Weapons. The GR-1’s job was done and the project was wrapped.