Radioactive materials were once sold in a STORE in the USSR! 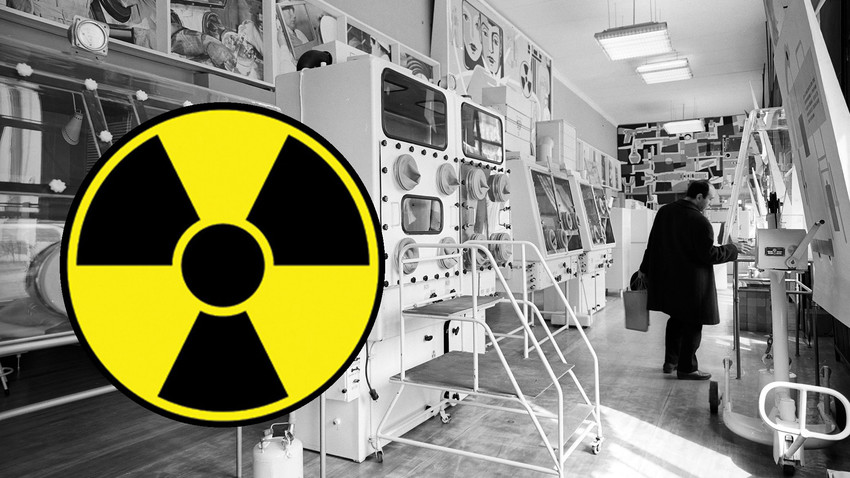 A. Lobov/Sputnik
‘Izotopy’ was the name of a specialist store in Moscow that sold radioactive materials. And demand for them was very high. But how was such a thing possible?

It is fairly difficult today, even in the most democratic country in the world, to imagine a situation in which radioactive materials could be acquired by simply going to a store. “Store for Young Terrorists” is the wisecrack doing the rounds today when people recollect that a store of this kind existed in the USSR! Called Izotopy, it wasn’t just popular throughout the Soviet Union - foreigners came to shop there and the store itself also carried out an export trade. 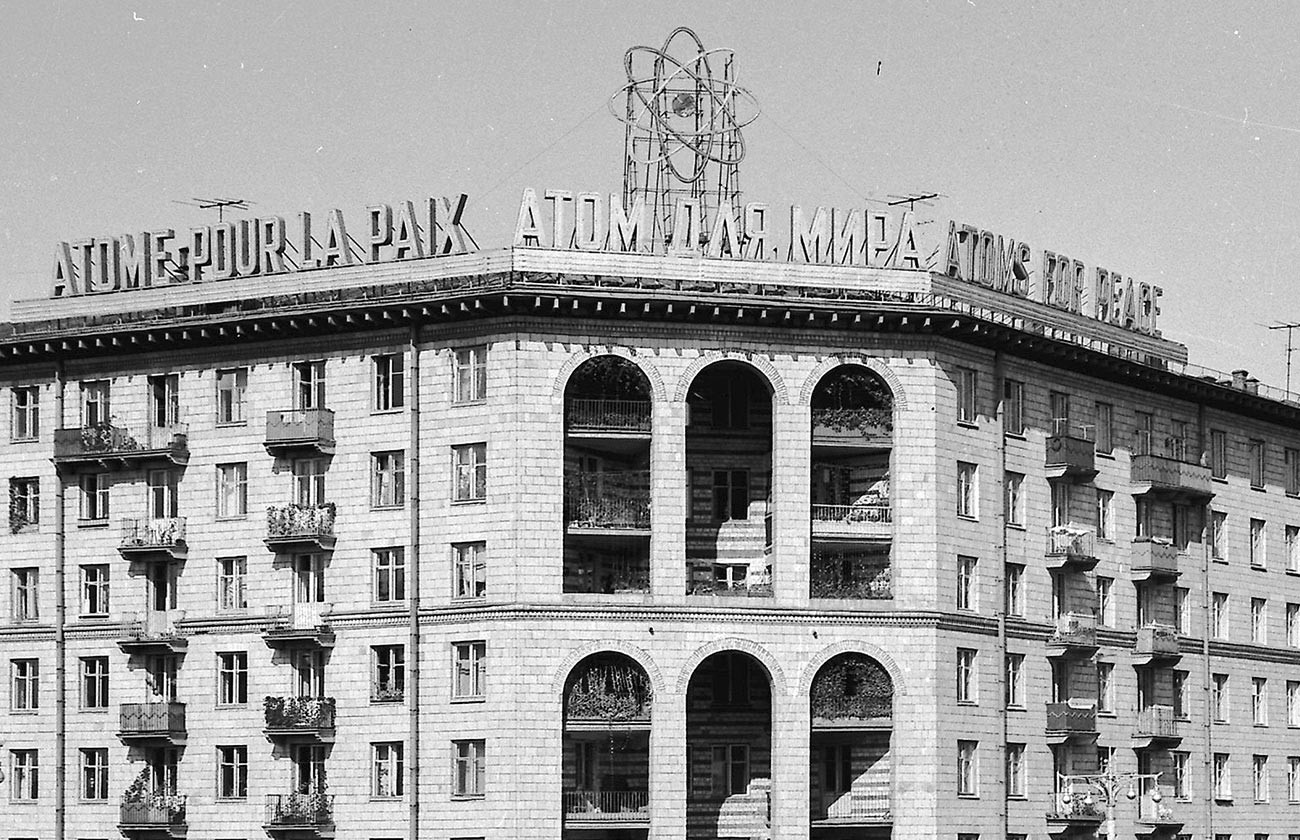 It was located on Leninsky Prospekt, a street that leads to and from the center of Moscow. On the roof of the building was an enormous neon advertising sign with a depiction of an atom in four colors and slogans in three languages: “Atome pour la paix” and “Atom for Peace”, alongside the Russian “Атом для мира”. This phrase above all was the reason for the establishment of such a store in the first place: In the late 1950s, the Soviet Union was going big on the “peaceful atom”. The message was that radioactivity was becoming part of Soviet people’s everyday lives and would henceforth be helping them to do all sorts of things - preserve potatoes, eliminate drain leaks and even count fish.

The very existence of the store was possible thanks to a discovery made 25 years earlier in 1934. French physicist Frédéric Joliot-Curie demonstrated that radioactivity could be man-made. It was an unlikely idea at the time. Until then, it had been believed not only that artificial radiation was impossible, but also that it was impossible to control (slow down or speed up) radioactive emission and that it was a self-contained intra-atomic process. Curie demonstrated the opposite: On irradiating aluminum with polonium, he obtained atomic nuclei of phosphorus not encountered in nature, as a result of radioactive decay. In other words, a radioactive isotope. 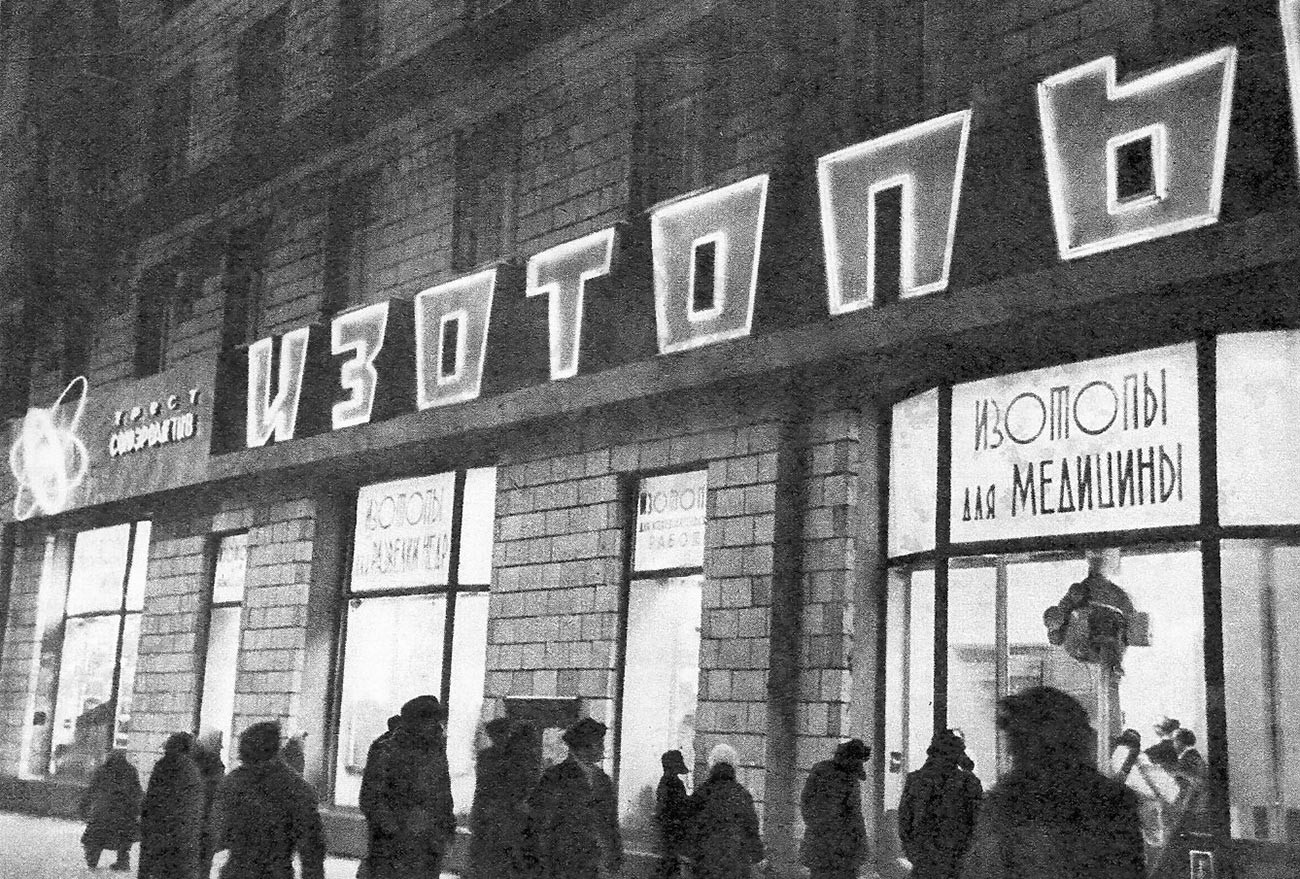 The most striking aspect of the discovery was that the isotope only retained its radioactivity for a short period of time and its radiation level could be easily measured. It was these characteristics that opened up a broad avenue for the application of isotopes in industry, science, medicine and even the art world. Just a year after the discovery of artificial radioactivity, scientists had obtained more than 50 radioactive isotopes.

They functioned like invisible radio sources continuously sending out signals about their whereabouts. They could be monitored with the help of radiation detectors or charged-particle counters. They could be used, for instance, to work out how rapidly the walls of a blast furnace were deteriorating. There was no longer any need to suspend the operation of a furnace. All you needed was to insert some radioactive material in the wall and then, when the furnace started up, to check metal samples from each smelting operation for radioactivity. If radiation was detected in the cast iron it was a sign of the deterioration of the furnace.

Isotopes were used to count fish without taking them out of water, to measure the density of fur, to check whether fertilizer was absorbed properly by plants and where gas was leaking out of a pipe, to determine the humidity of soil, to diagnose gastritis, stomach ulcers and cancer, to tag valuable works of art, jewelry and banknotes and to irradiate potatoes to stop them from sprouting. 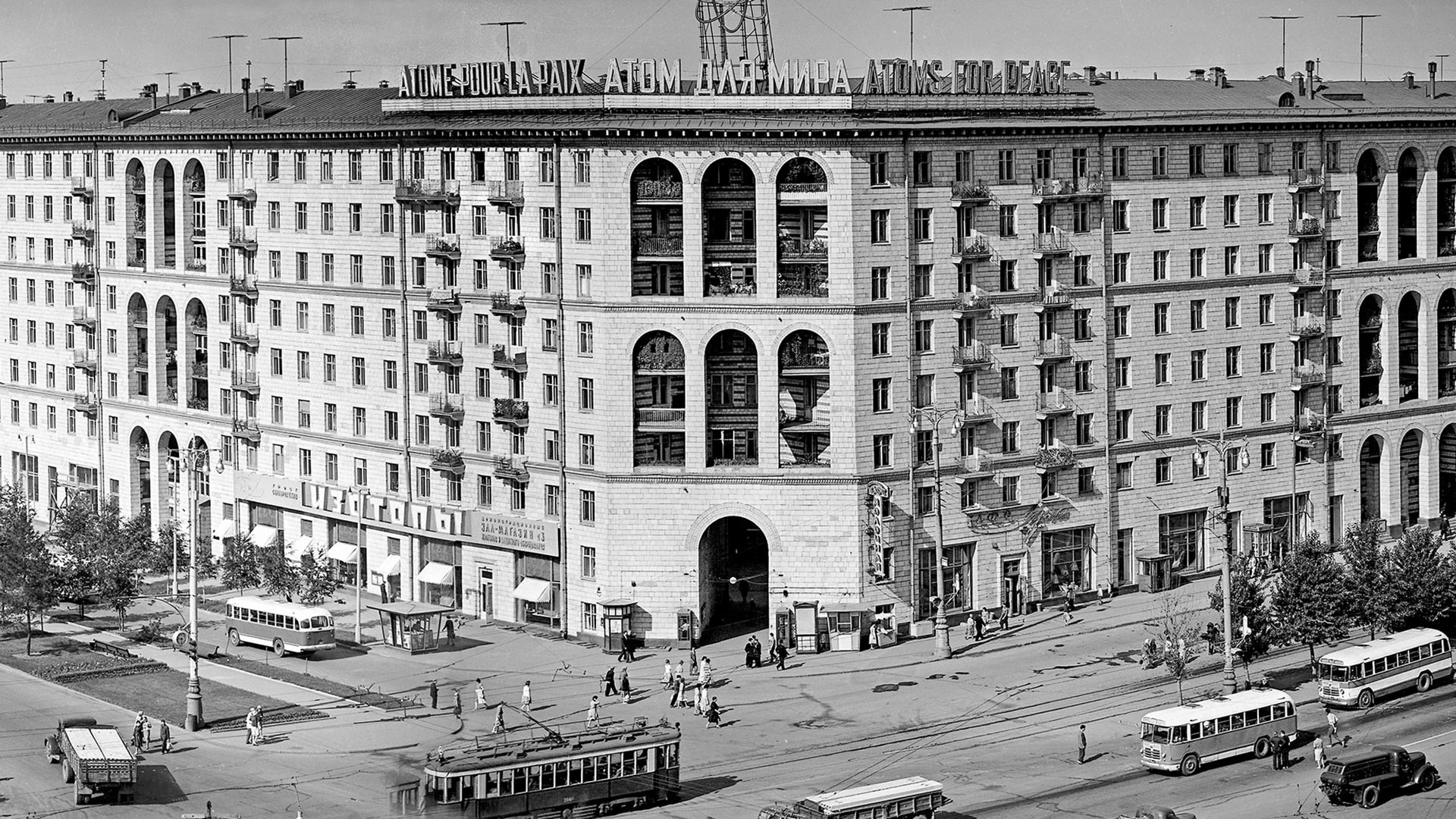 And that is only a small part of the fields in which isotopes were applied. In the mid-1950s, the Soviet Union gave the impression of wanting to switch pretty much all industries to an isotopic footing. It also seemed attractive from a foreign policy point of view. With its civilian atomic agenda, the USSR did everything it could to distinguish itself from the militaristic U.S. which had bombed Hiroshima.

“What is the greatness of the Soviet atom? The fact that it has been demobilized. Yes - there’s no argument on that score! In our country, it has taken off its military uniform . Since the first atomic power station was inaugurated the atom has put on workman’s overalls. Isotopes are atoms in overalls, civilian sons of toil,” wrote Ogonyok magazine in 1960.

When this was written, the Izotopy store had already been open for a year.

Supplies from the men in shoulder straps

In actual fact, it was never just an ordinary store. For a start, the materials were not sold to just anyone, but only to authorized buyers. And since an ordinary person had no reason to enter the store, not all Muscovites realized what was being sold there and in what form. Curious visitors came out disappointed: “It was empty and boring inside: Neither the threatening glint of mercury nor the monumentality of uranium ingots… Like a museum without exhibits,” recalls Viktor from Moscow. 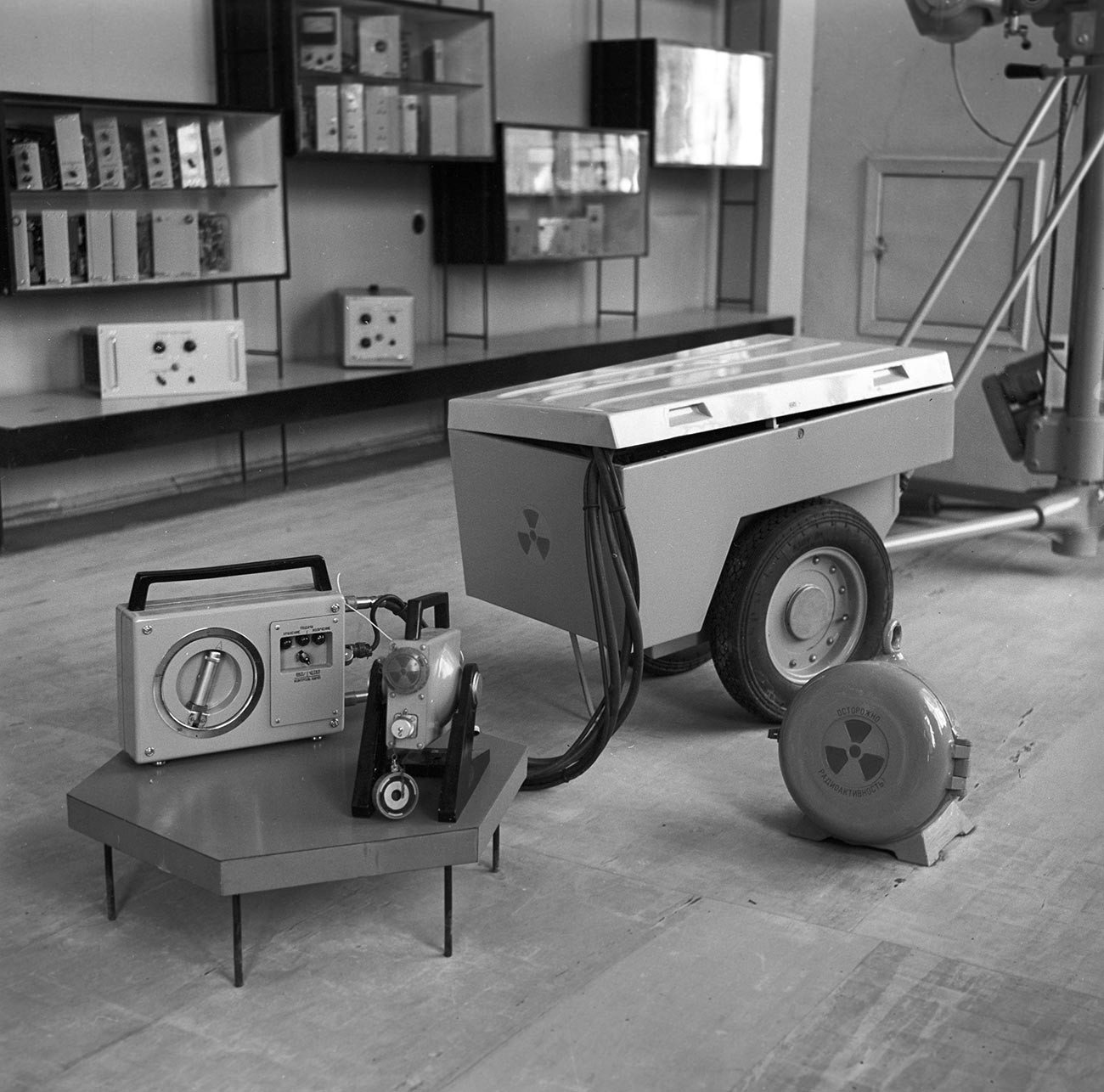 There was a compulsory requirement to produce an official document from your place of work certifying that you were authorized to buy goods of this nature. They called it  a “document establishing the public health preparedness of consumers for taking delivery of, storing and working with the named goods”. As a rule, they were representatives of factories, plants and research institutes.

The isotopes were sold in radiation-proof containers that had to be returned to the store within 15 days.

The store assistant’s title was ‘Store Scientific Director’ and only people suitably versed in the field were recruited to work there. In terms of format, Izotopy was more like a demonstration room than a standard store with a sales counter, as it was impossible to see the products directly. The buyer had to rely on entries in a catalogue and an illuminated display indicating availability. Moreover, all this was supplied directly to the store by the Ministry of Internal Affairs - men with shoulder straps. 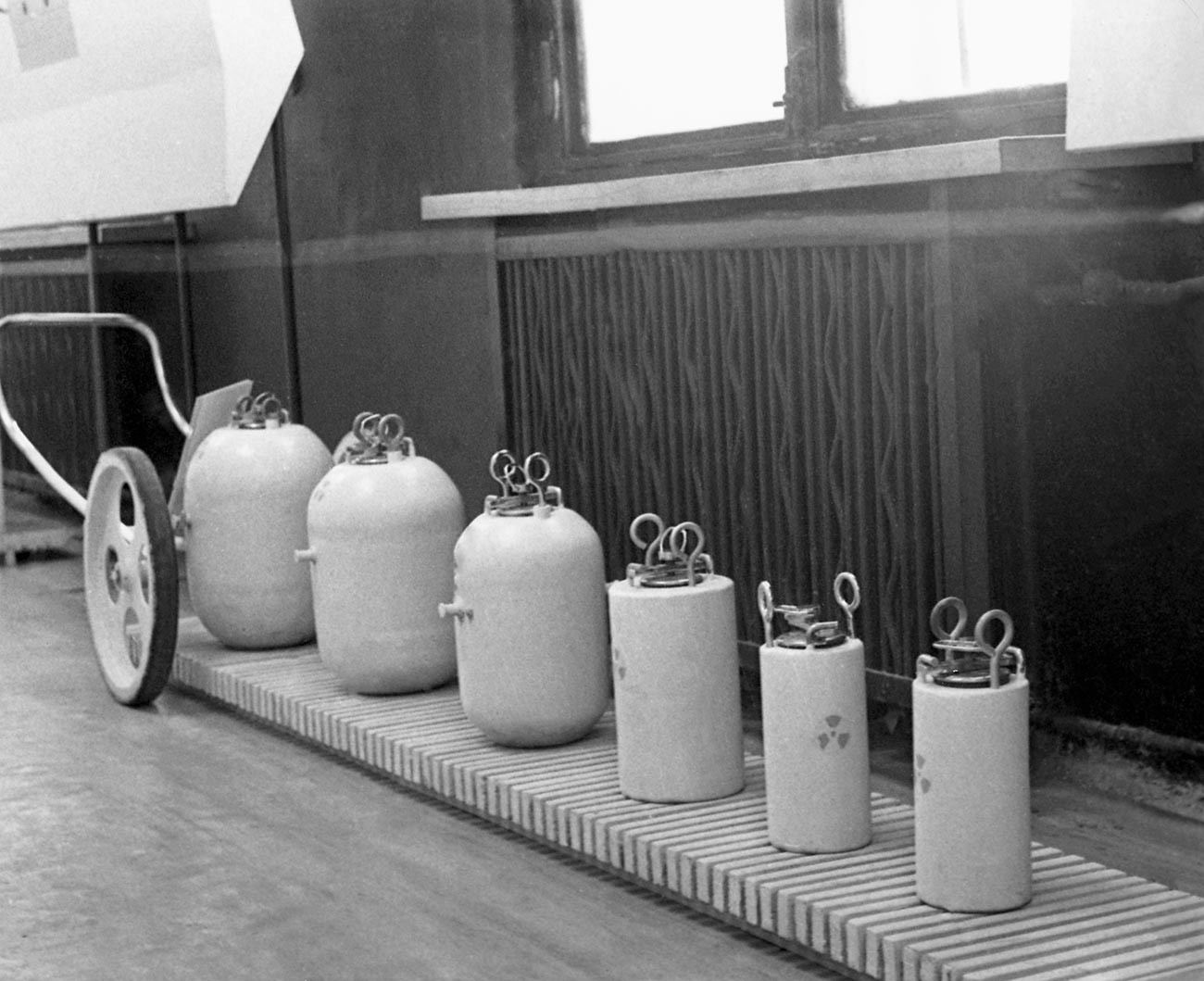 Given such a demand for isotopes, one would have expected the enterprise to have been mega-successful and long lived. The 1950s was a boom period for radioisotopic equipment and instruments - they were notable for their high degree of simplicity and inexpensiveness and practically became a byword for “automation”. But the situation turned out to be not so simple or clear cut. 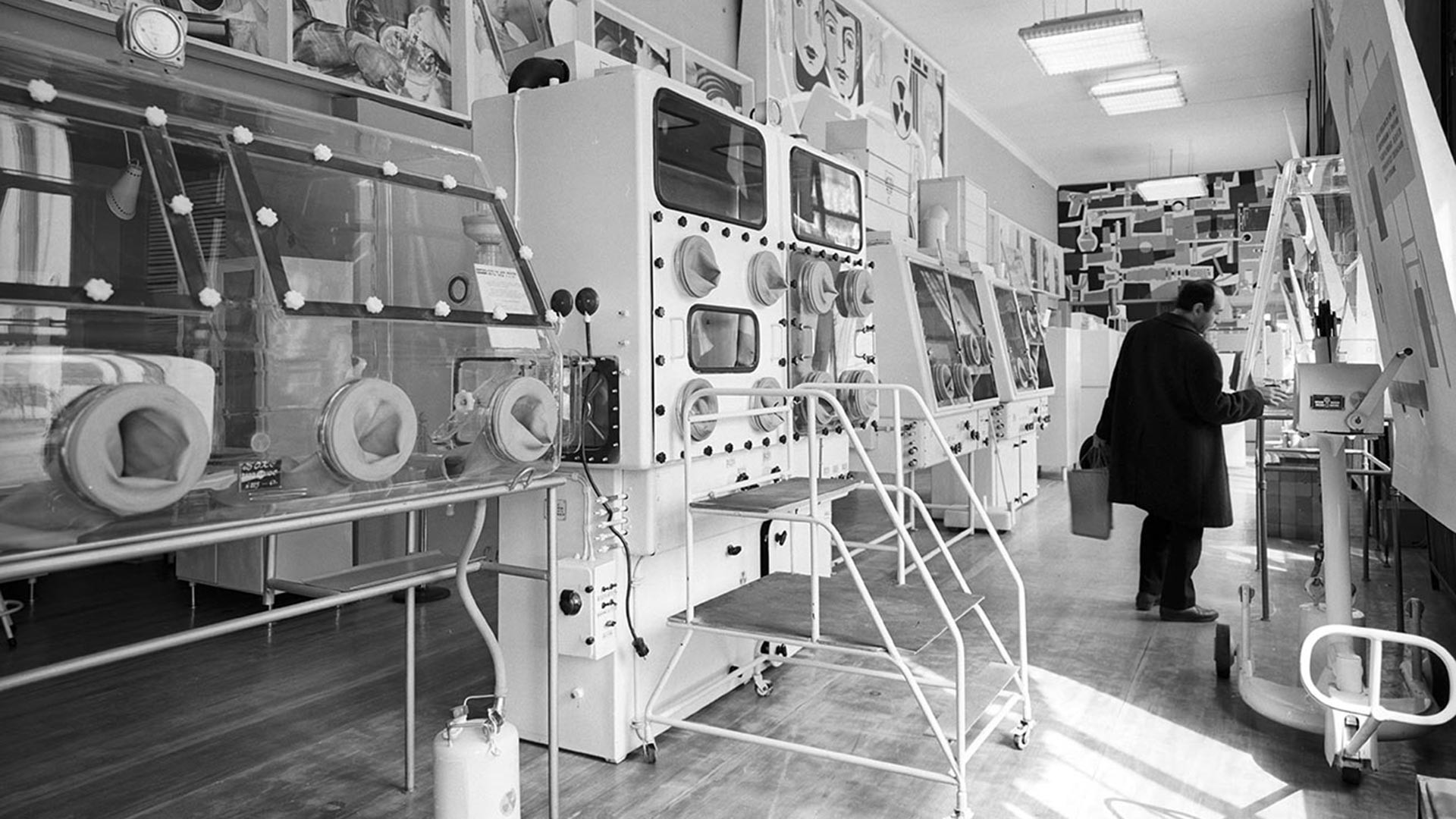 In the socialist planned economy, where shortages were an everyday occurrence, supplies of isotopes suffered from sporadicity and packaging problems (and consequently problems of safety during transit). This radiation threat gave rise to numerous questions on the part of the Soviet postal service, which fairly soon began to focus on how to transport isotopes without risk to anyone who might come into contact with them. This was all the more pertinent, as the disruptions in the Soviet system affected not just deliveries of the materials themselves, but also supplies of protective equipment for them, such as lead housings and radiation monitoring instruments. 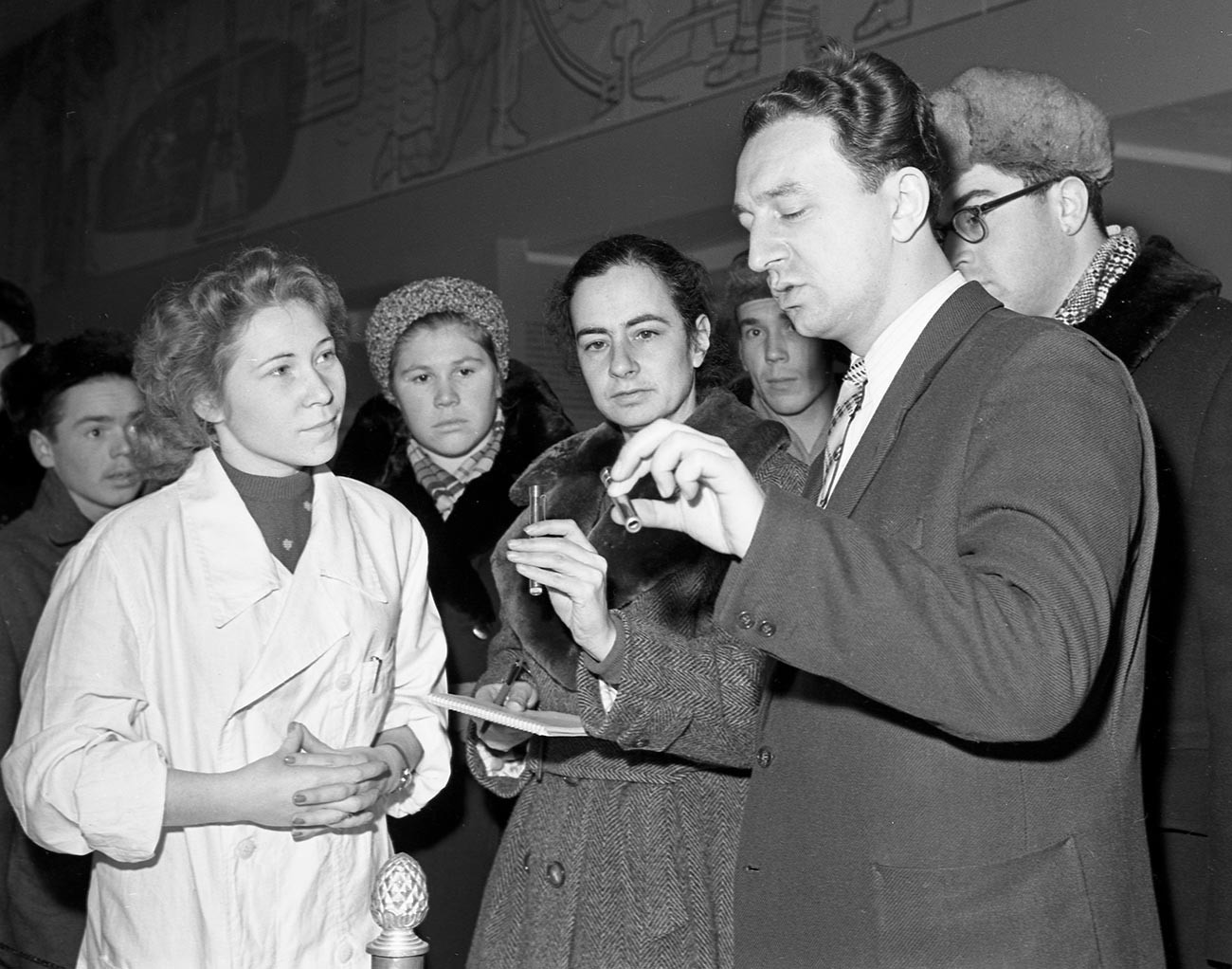 The shortages and problems with logistics, packaging, shipping and safety measures snuffed out the euphoria over isotopes within the Soviet Union. But not outside it. Thanks to their high quality and low price, Soviet isotopes were greatly valued on the Western market.

For example, 1 gram of highly-enriched isotope could be sold for several thousand dollars. But apart from the state monopolist in charge of exports of isotope-based products, scientists themselves were also illegally taking them out of the country from various Soviet research institutes. In the West, they were usually paid for with scientific equipment or the chance to carry out fully-funded research in foreigh laboratories. As a rule, such deals were provided for under international scientific-technical cooperation agreements. 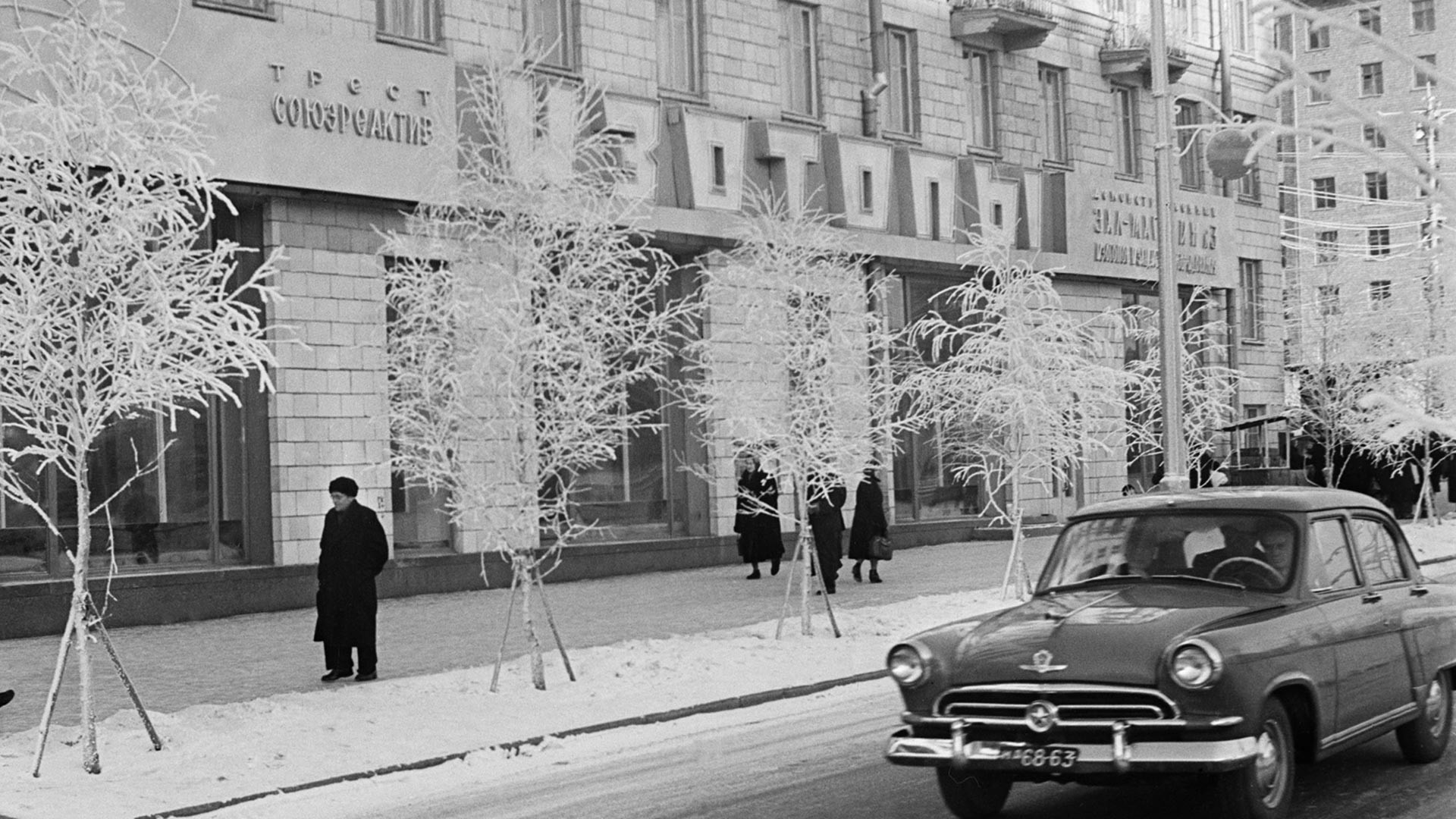 From the 1990s onwards, exports of this kind assumed massive proportions and both private companies and companies affiliated to research institutes were involved. As it happens, the Isotopes store closed not long before the break-up of the Soviet Union.  The country’s first store selling Svetozor-Polaroid instant cameras opened in its place in 1990.