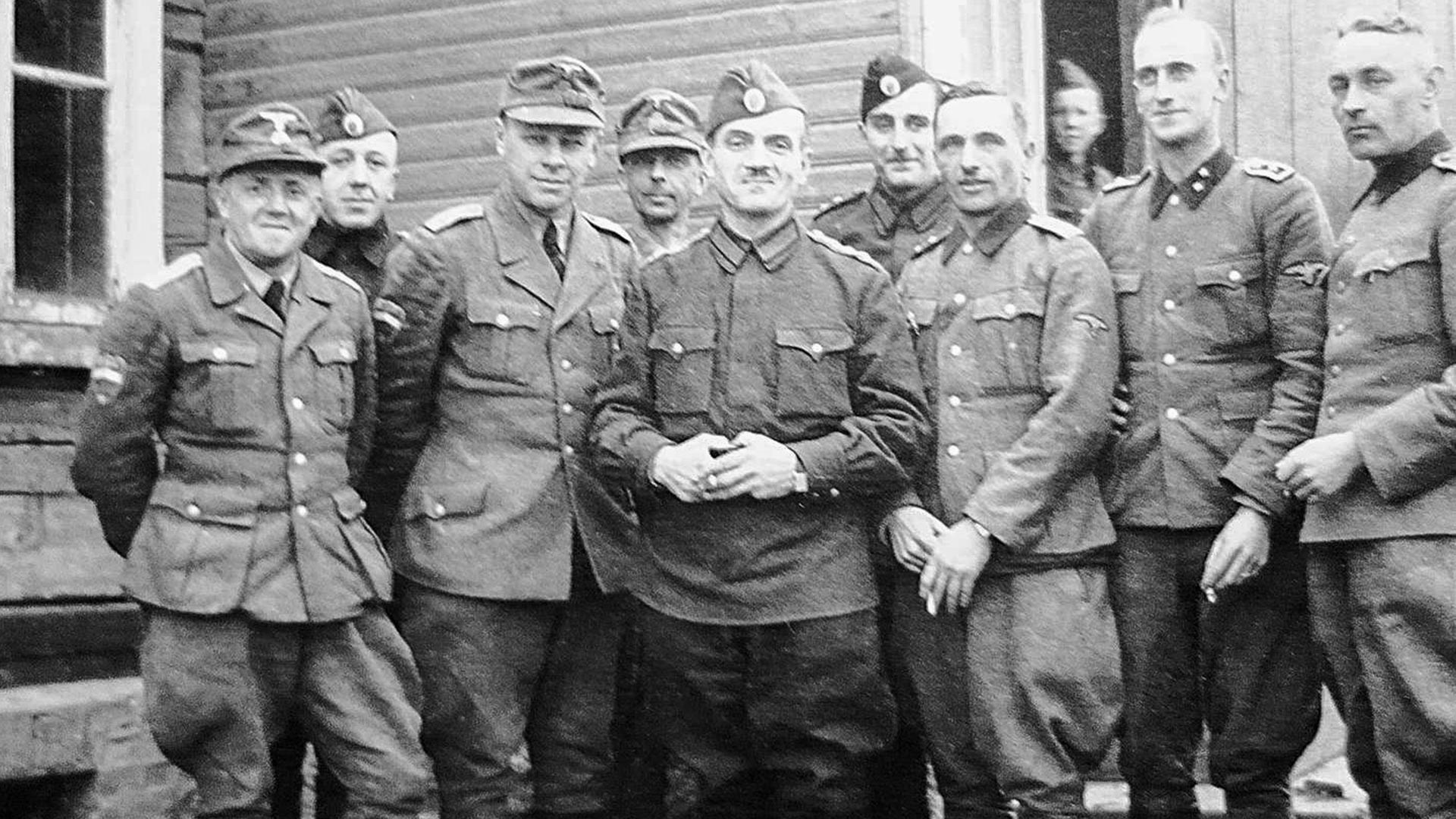 Colonel Constantine Kromiadi (C), Vladimir Gil (next to him), and officers of the Druzhina brigade.

Archive photo
The Soviet government did not know what it would do with punishers from the Druzhina SS Brigade, who had defected to its side when the war was over. In the end, that problem resolved itself.

During World War II, hundreds of thousands of Soviet citizens fought on the side of the Nazis. Collaborators were considered some of the worst enemies of the USSR, and Red Army soldiers often preferred not to take them prisoner, instead shooting them on the spot.

At the same time, deserters from among those who had betrayed their homeland were sometimes given the chance to “atone for their guilt with blood”. In fact, special efforts were made to try to get collaborators to switch sides and join the Soviet forces. Defections were carried out both by individual soldiers and entire units, but the most high-profile such case was the defection of the Druzhina SS Brigade to Soviet partisans. 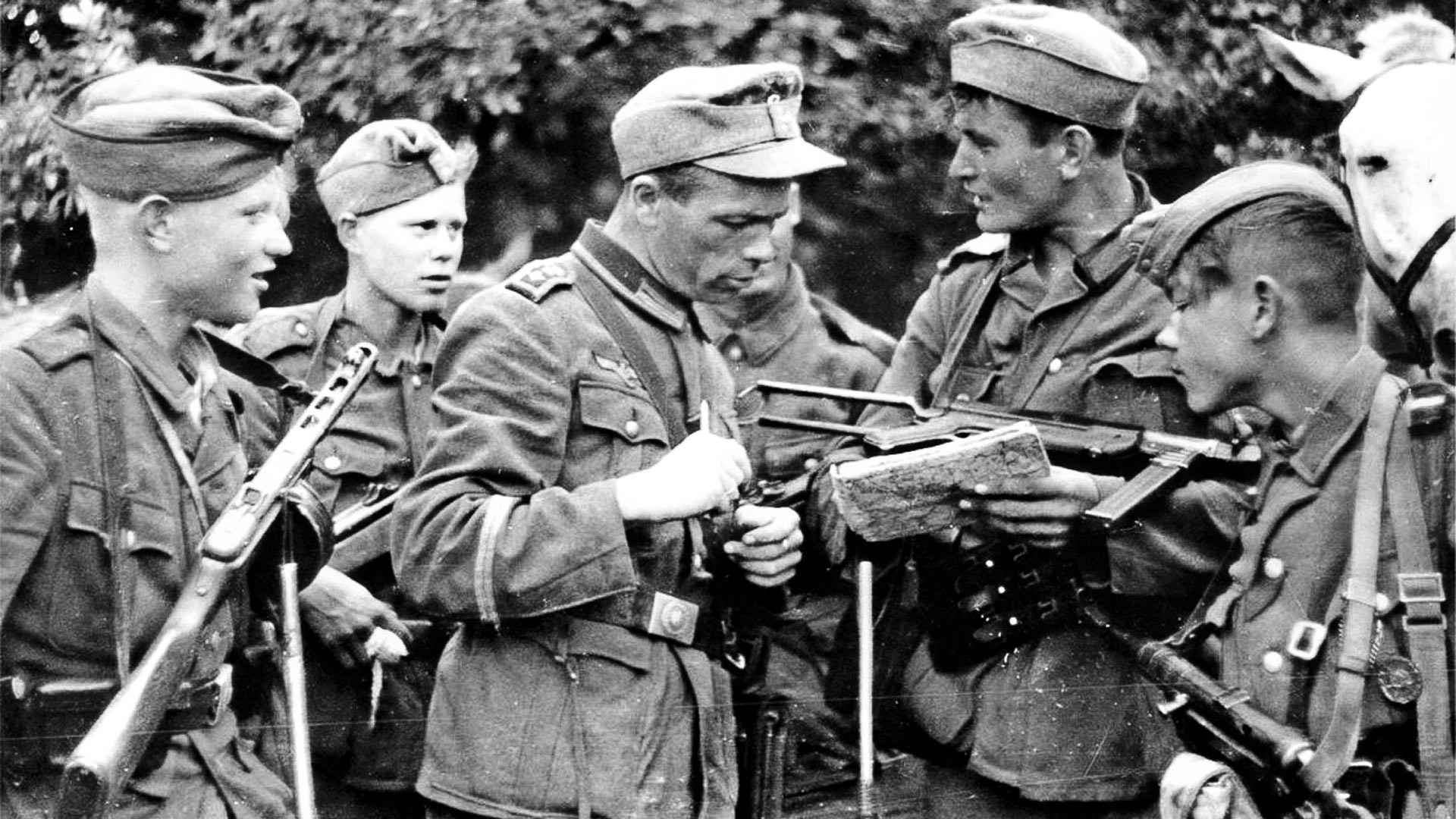 Like other collaborationist units, the 1st Russian National SS Brigade, also known as the ‘Druzhina Brigade’, mostly carried out operations against partisans and punitive actions against the civilian population in German-occupied territories.

The core of the brigade was made up of former Soviet soldiers who had been captured by the Germans and had volunteered to cooperate with the Nazis. The same could be said about its commander, Vladimir Gil (who took the pseudonym ‘Rodionov’), once a lieutenant colonel in the Red Army. In addition, the unit had a number of White Guard emigrants in it, who had thus decided to take revenge on the Bolsheviks for their defeat in the Civil War.

The Druzhina Brigade was known for carrying out punitive expeditions on the territory of Belarus. Its members burnt down villages that had helped the partisans, shot civilians and sent local residents into forced labor to the Reich. The Germans believed that after such bloody acts, Russians inside the SS units would never be able to cross to the other side. 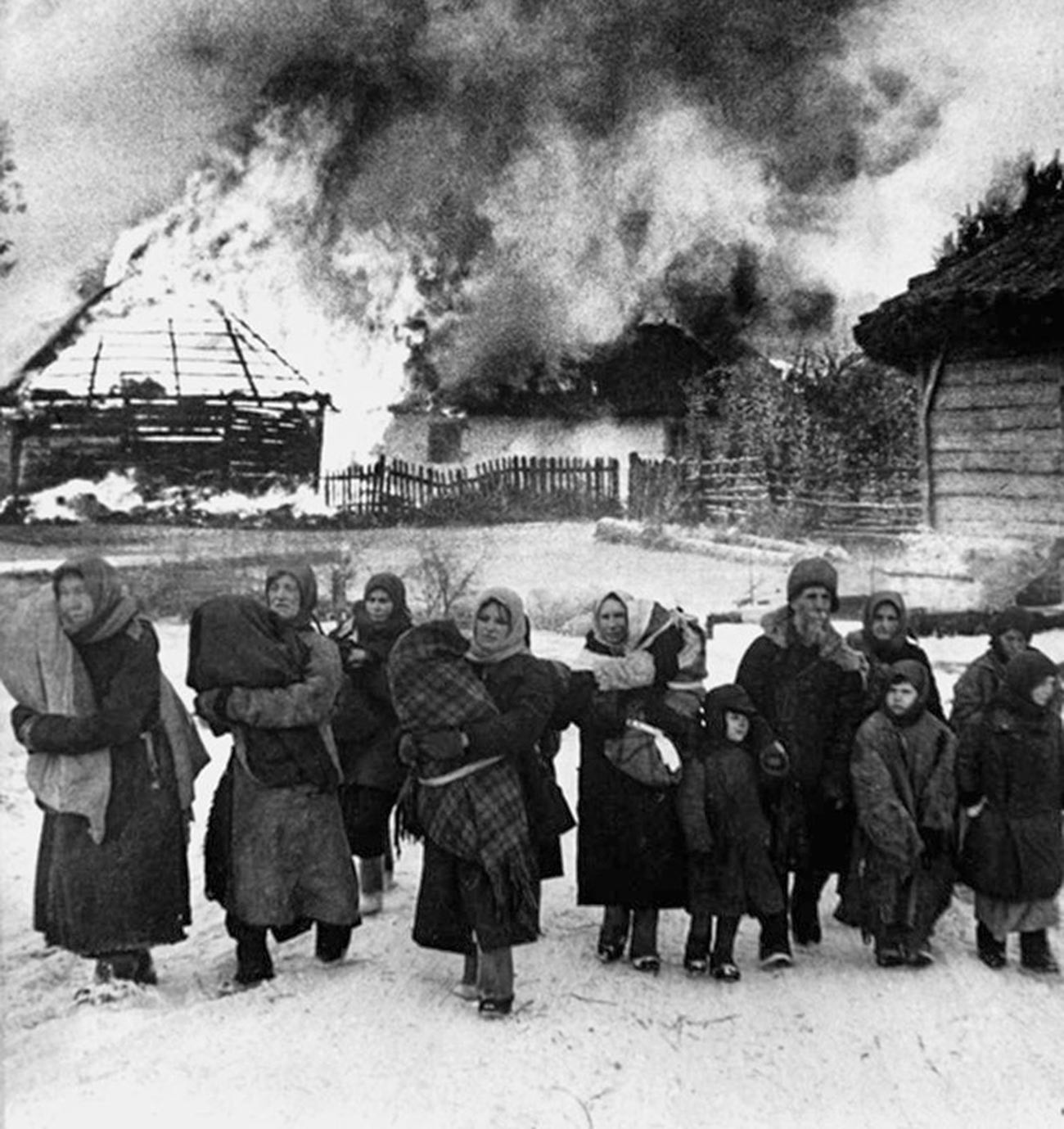 Curt von Gottberg, the head of the SS, Gestapo and police in the region, praised the effective actions of the Druzhina Brigade in the anti-partisan operation Cottbus that took place in May-June 1943. His report to Berlin on July 13 said that “the unit will very soon become a strike force and appears reliable in the fight against the gangs”.

In fact, the situation inside the 1st Russian National Brigade at that time was not so rosy. Its members were deeply shocked by how badly things were looking for the German army in the Battle of Kursk. In addition, Operation Cottbus took its toll on the Druzhina Brigade, too: the soldiers were demoralized by the heavy losses incurred during clashes with the partisans.

At some point, Gil practically stepped aside from leading the unit, preferring instead to spend all his time in the company of women, playing cards and drinking. While some officers were secretly discussing with him whether they should return to the side of the USSR, others openly expressed dissatisfaction with their commander and called on the Germans to remove him. The partisans decided to take advantage of this split. 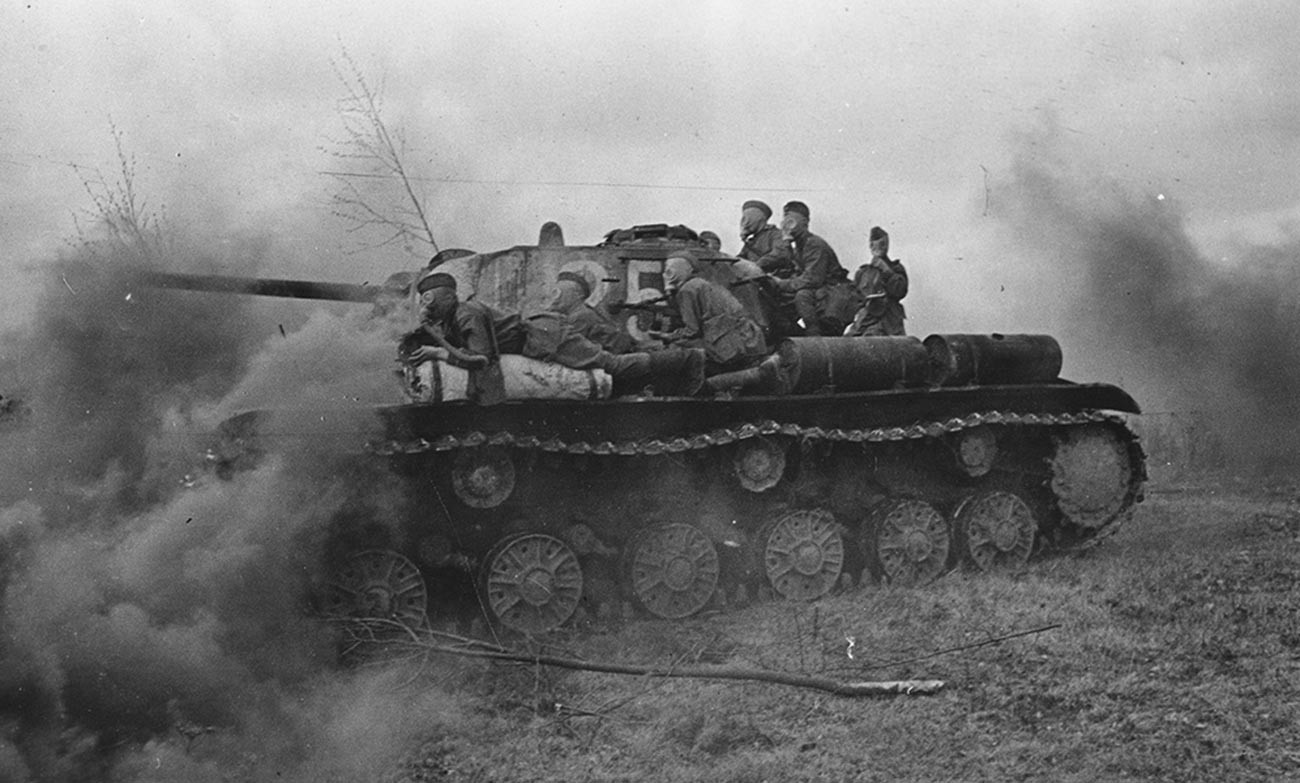 If, at the start of the war, collaborators who were captured were mostly shot on the spot as traitors, after 1942, policy towards them began to change. Now the plan was to undermine - through propaganda - the morale inside the units created by the Germans from Soviet citizens in the occupied territories and, if possible, get them to switch sides. The Druzhina Brigade was of particular interest to the central headquarters of the partisan movement: it was reported that prominent collaborator Andrei Vlasov was planning to use it as a basis for a Russian Liberation Army.

Propaganda work with Gil-Rodionov’s SS brigade was conducted by the Zheleznyak partisan detachment. The Druzhina Brigade was infiltrated by members of the underground and agitators and bombarded with propaganda literature and leaflets. The partisans also sent personal messages to each of the Druzhina officers urging them to “redeem themselves with their blood”. 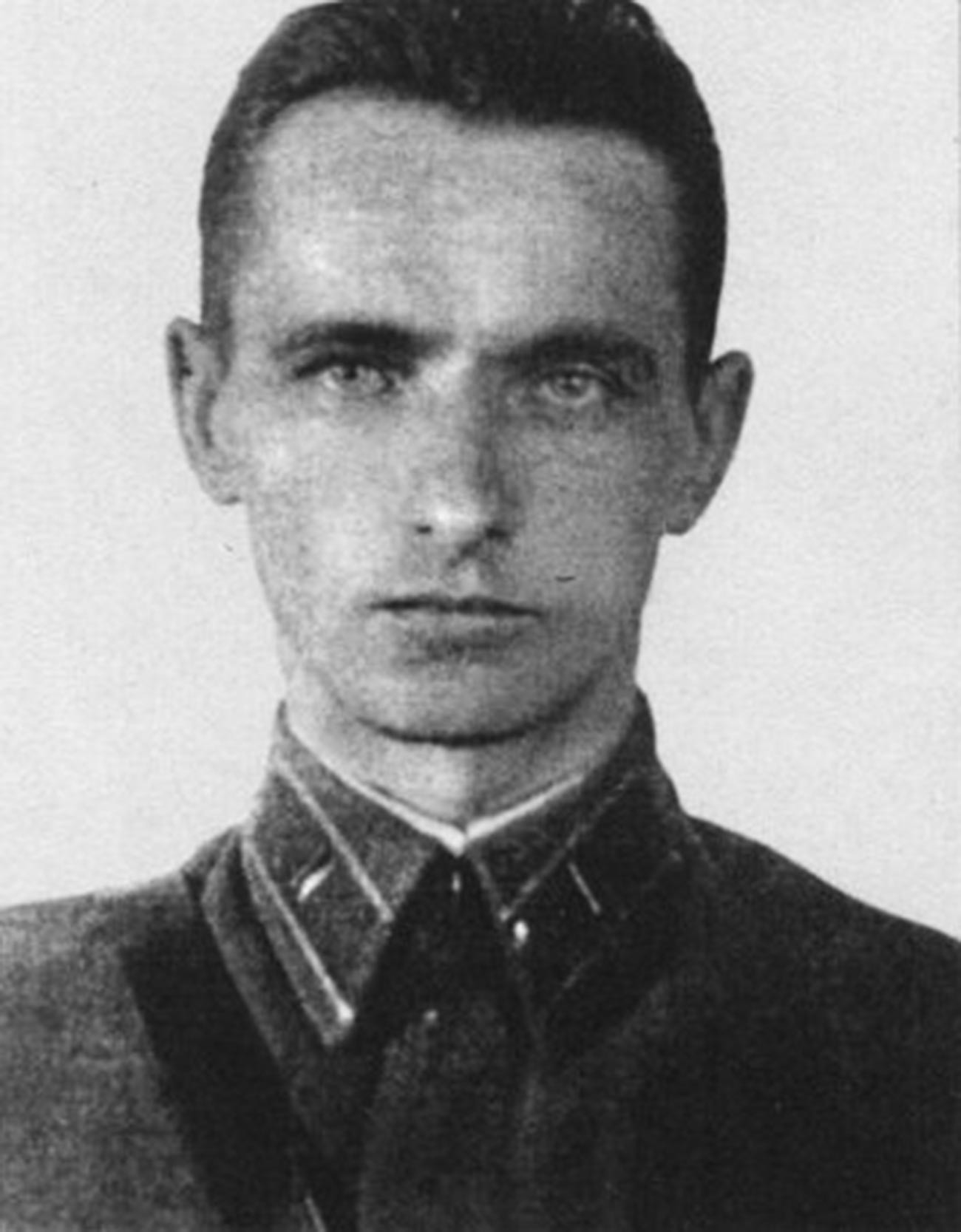 For members of the Druzhina Brigade, a possible defection to the side of the partisans was not something out of the ordinary. Back in November 1942, one of the brigade’s companies, numbering 75 people who were guarding a bridge over the Drut River, killed 30 German soldiers and ran into the woods to join the partisans. In the summer of 1943, that was a step Gil-Rodionov himself and most of his soldiers were ready to take.

On August 16, at a secret meeting on neutral territory between Gil and the leadership of the Zheleznyak partisan detachment, conditions were agreed for the SS fighters to join the partisans. All of them (with the exception of the White Guards) were promised immunity, a chance to rehabilitate themselves to their Motherland, a reinstatement of their military ranks and an opportunity to correspond with their families. Gil insisted that he would continue to command the unit. 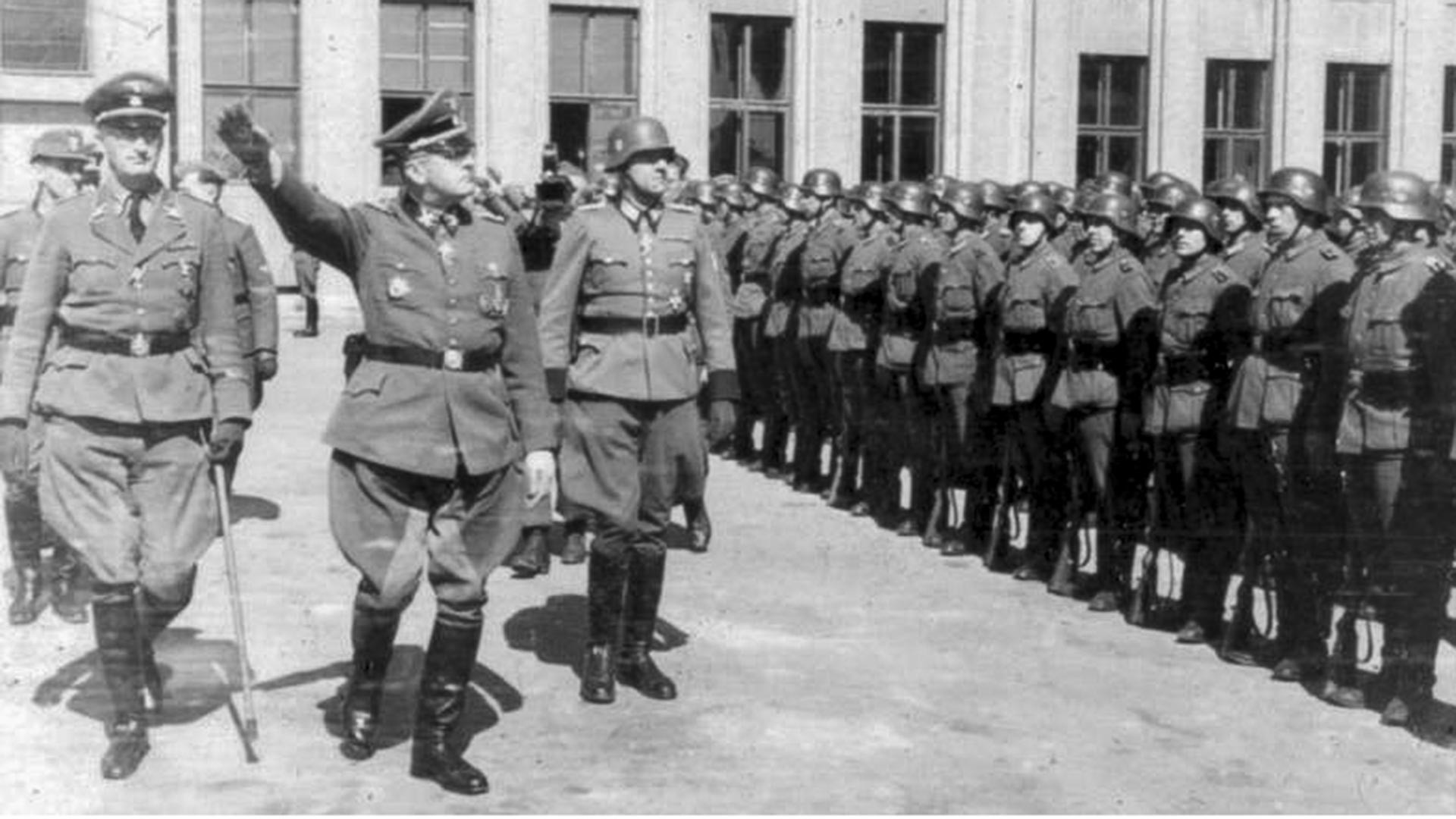 On the same day, the brigade’s defection to the Soviet side began. Accompanied by officers and loyal soldiers, Gil went from one village where the Druzhina regiments were billeted to another, addressing the troops, telling them that the Germans had deceived them, that “they had no thought for a ‘new Russia’, but instead, had only one goal - to enslave the Russian people”. He said: “While giving their promises and assurances, the fascist bastards, all the while, carried out their massacres of innocent unarmed civilians.” At the same time, Gil-Rodionov, of course, did not mention the part he and his subordinates had played in those reprisals.

The order that he then issued “to ruthlessly exterminate the Krauts until the last of them is expelled from the Russian land” was greeted with noisy jubilation by the soldiers. Straight away, they killed the stunned Germans and arrested the White emigres and those officers who were against the commander. 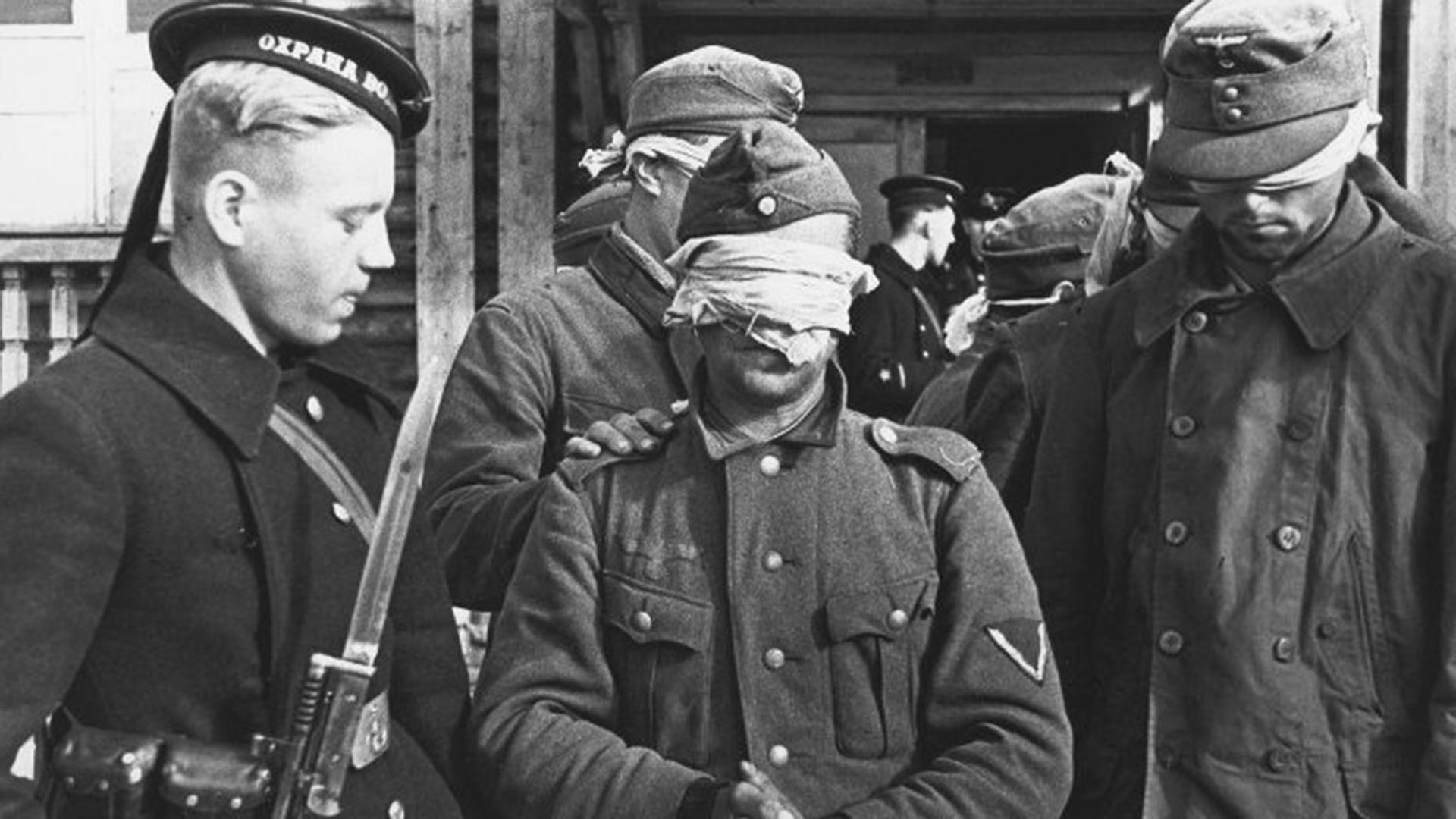 As a result, on August 16, 1943, a total of 1,175 armed Druzhina fighters went over to the side of the partisans. Later, they were joined by some 700 more soldiers. However, not all the SS men were happy with these changes and over 500 of them fled to join German garrisons. Those of them whom the other Druzhina members managed to catch were shot on the spot.

Thus, the 1st Russian National Brigade, the ‘Druzhina’, ceased to exist. In its place, the ‘1st Anti-Fascist Partisan Brigade’ was established. As promised, Vladimir Gil-Rodionov became its commander.

In addition, the unit was reinforced with some 400 partisans and political workers. All its members were vetted by security officers from the August operational group, who identified 23 German intelligence agents among them. 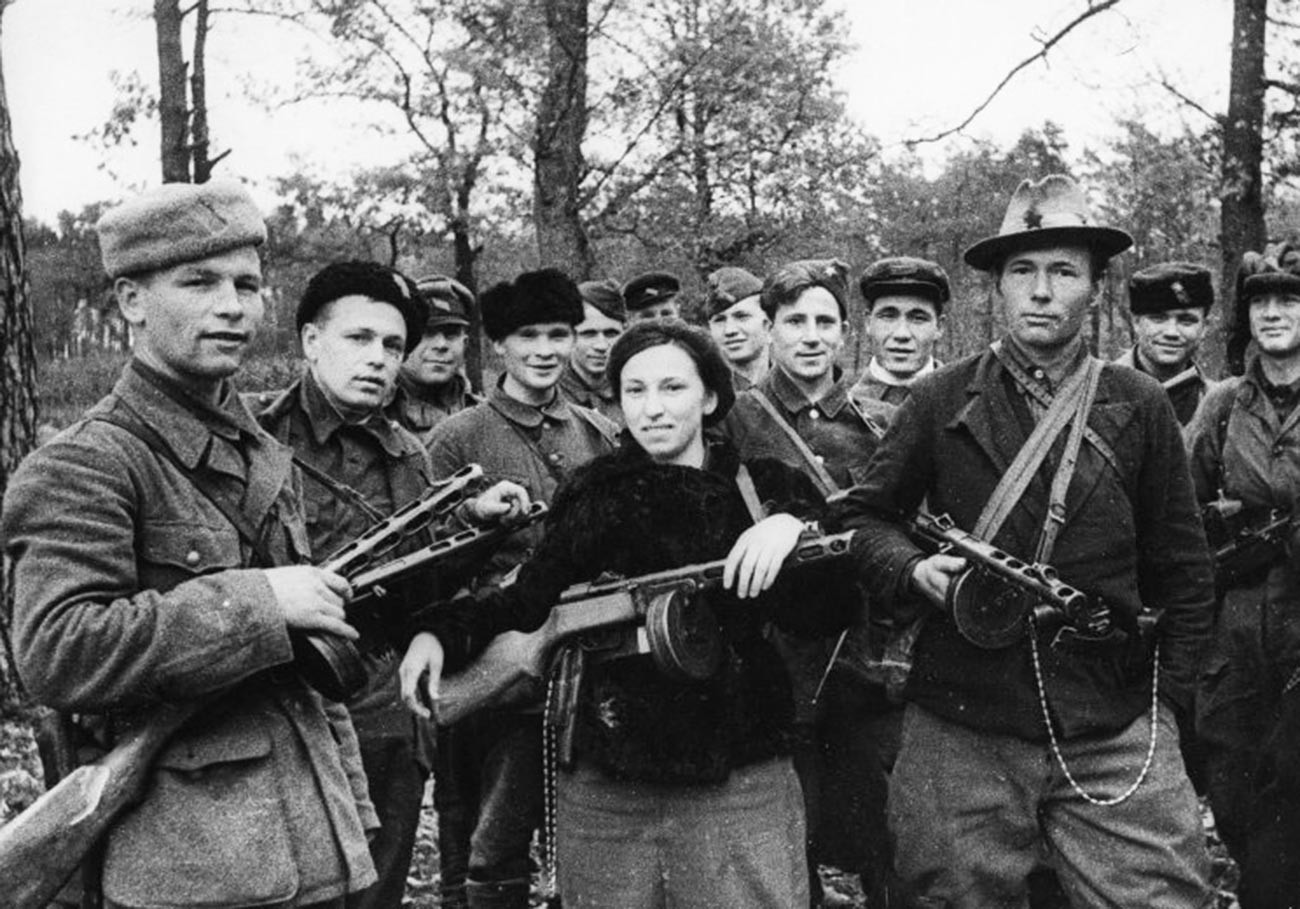 Relations between the former SS men and the partisans were not always easy. The latter remembered all too well the Druzhina fighters’ participation in Operation Cottbus, in which many of their fellow partisans and relatives were killed.

Nevertheless, the newly assembled “anti-fascists”, who were usually sent on the toughest missions, fought bravely and fiercely, indeed trying “to atone for their guilt with their blood”. And still, Gil was nervous, not knowing what fate awaited him after the war.

The Soviet government made active propaganda use of the Druzhina Brigade’s defection. It was largely for propaganda purposes that on September 16, 1943 Vladimir Gil-Rodionov was promoted to colonel and awarded an Order of the Red Star. Many members of the brigade were awarded with Partisan of the Patriotic War medals. 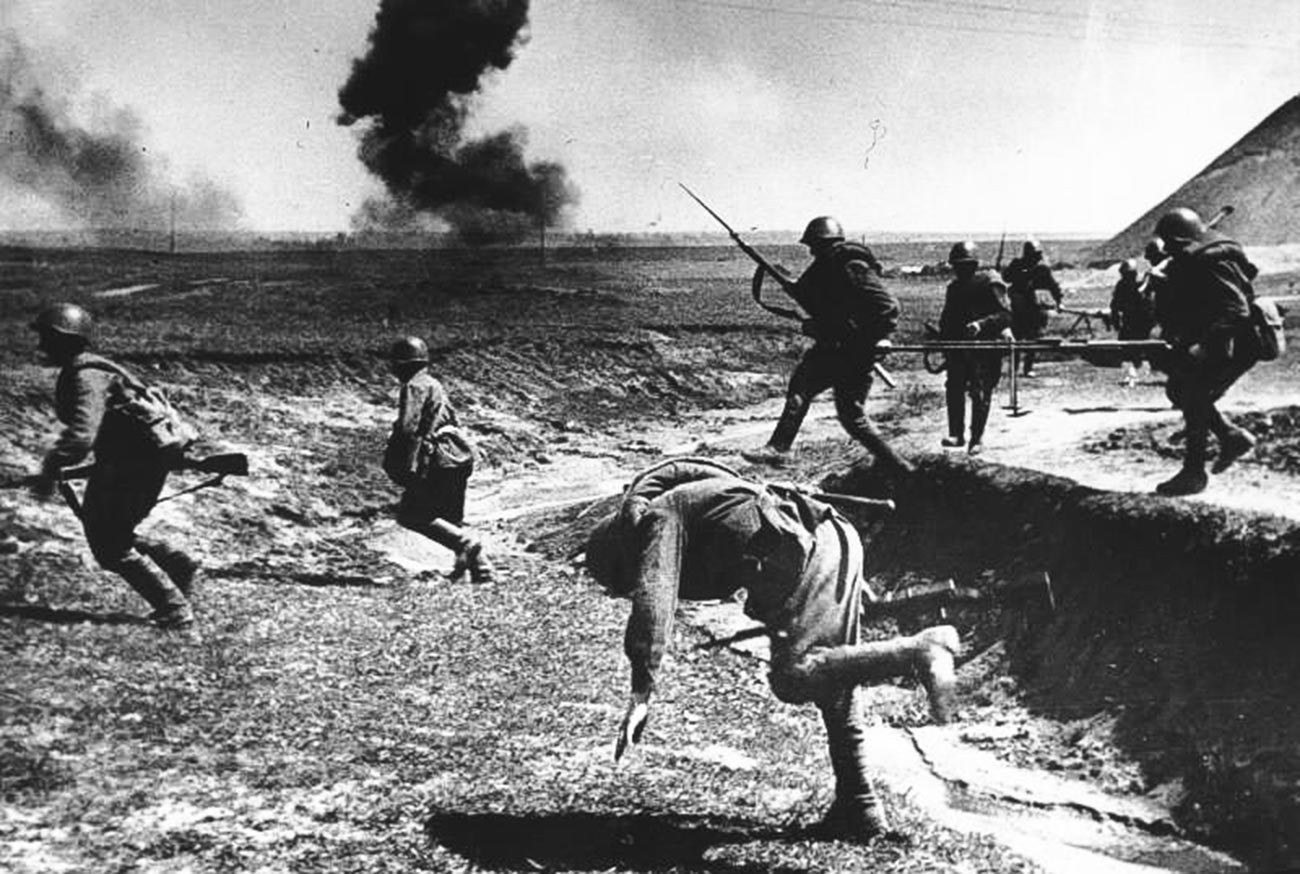 Having suffered huge losses, the partisans were trapped on a small piece of land, from which they managed to break through only in early May. Gil’s unit lost more than 90 percent of its personnel and virtually ceased to exist. The commander himself was killed in battle on May 14. 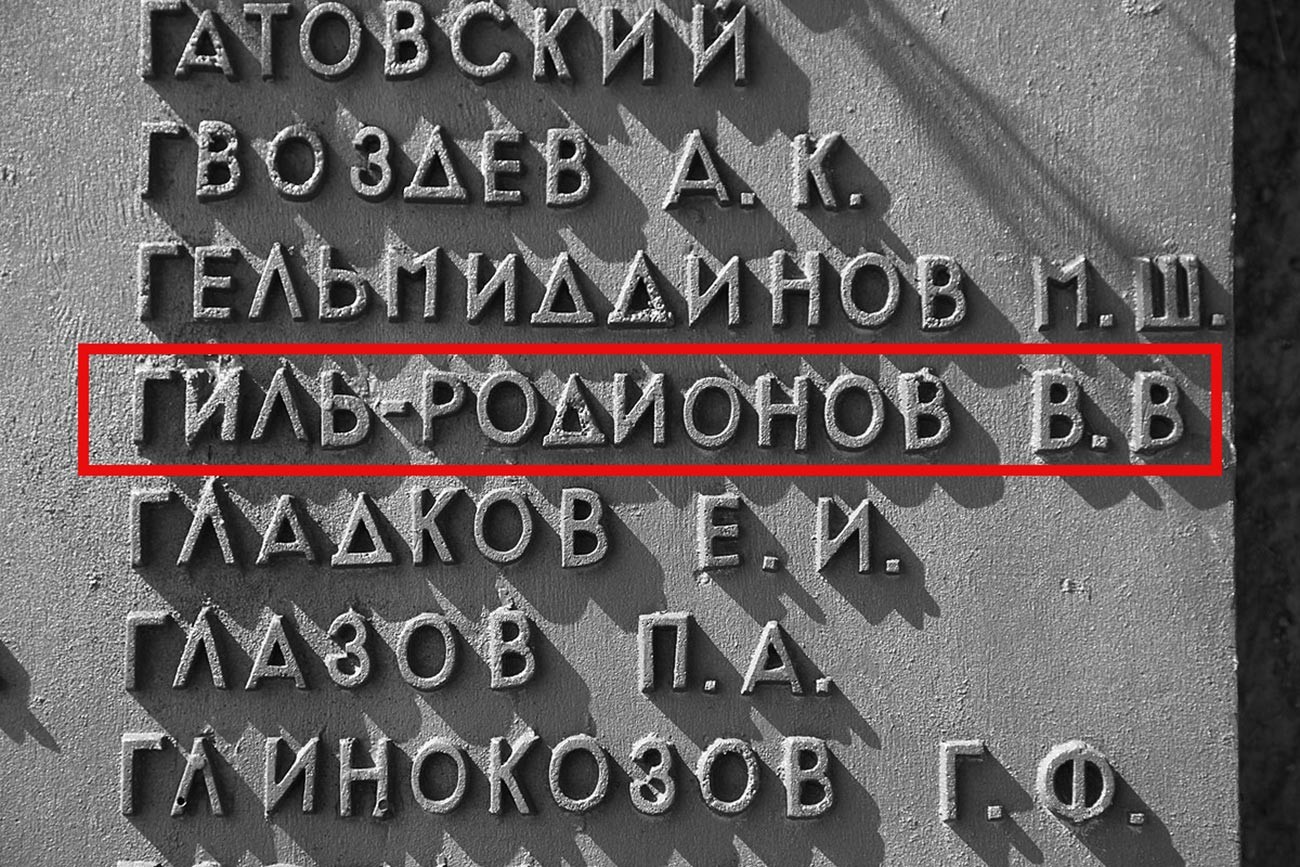 The name of the Colonel Vladimir Gil on the Breakthrough memorial complex.

“Maybe it was for the best that he died that way and avoided any grievances there may have been had he made it to Moscow,” Vladimir Lobanok, one of the organizers of the partisan movement in Belarus, said. In the end, Vladimir Gil was not subjected to any posthumous reprisals. His family was paid his allowance of a Red Army officer for 1941-1944. In addition, the names of the colonel and his soldiers were listed on the Breakthrough memorial complex commemorating the heroic and tragic events of the Frühlingsfest punitive operation.