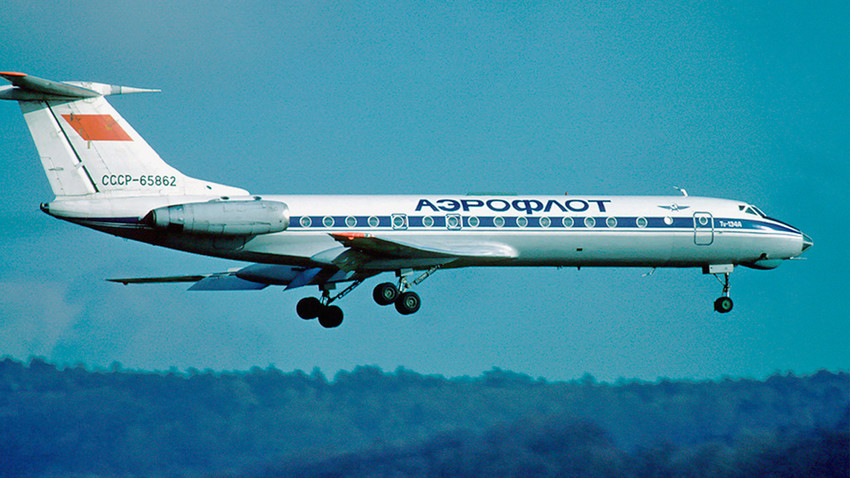 Just a few minutes before 16:00 on October 20, 1986, a Tu-134 approached the landing strip in Samara dangerously fast. In just a few seconds, the airplane crashed against the ground and burst into flames. 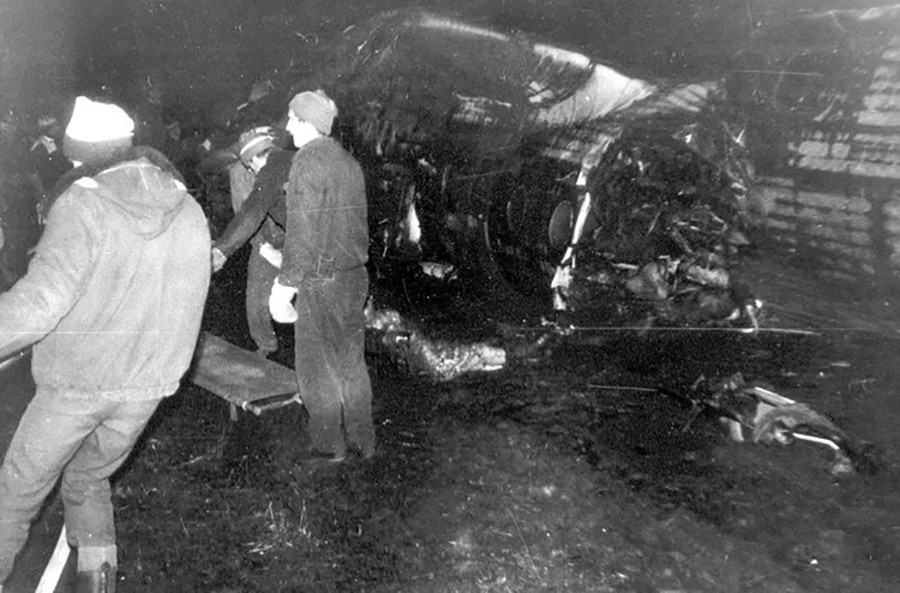 As it turned out, the captain of the aircraft had attempted to land the airplane blind, but the dubious bet with the co-pilot went deadly wrong.

For 87 passengers and 7 crew members, it was meant to be a regular internal flight from Sverdlovsk (known as Yekaterinburg today) to Grozny, with a layover in Kuybyshev (known as Samara today). Boarding the airplane in Sverdlovsk, people carried personal belongings and some of them were accompanied by children. 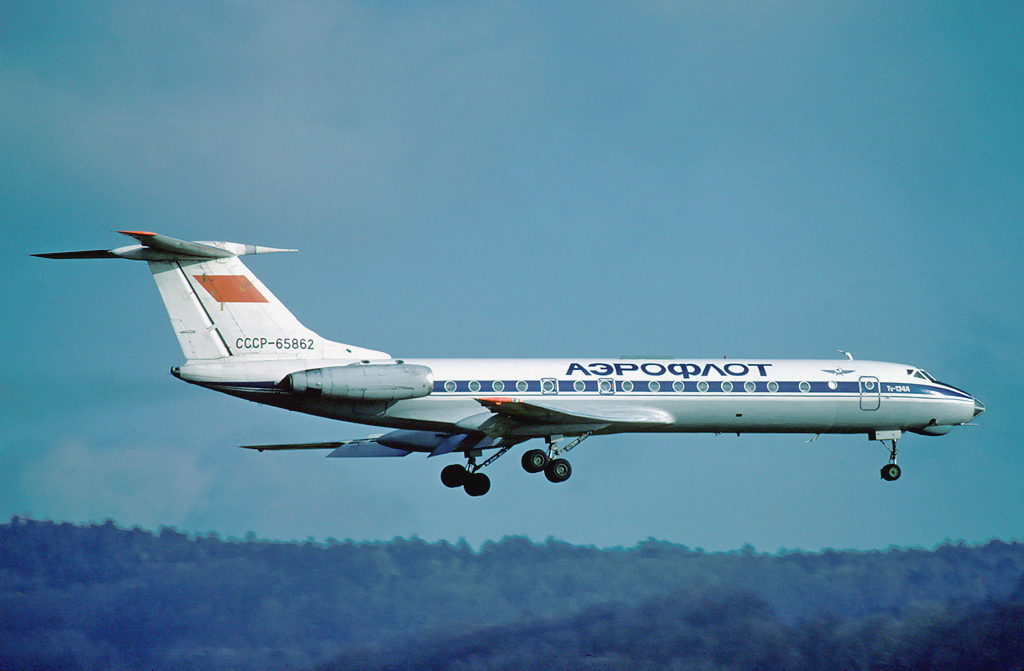 The first part of the flight was unremarkable. The take-off and time in the air up until the dreadful landing in Kuybyshev were just fine. Yet, before the city appeared on the horizon, the captain of the aircraft voiced a crazy idea.

Alexander Klyuev had a bet with his co-pilot, Gennadiy Zhirnov. He said he could land the airplane blind, without seeing the ground and relying only on the flight instruments. Motives behind the co-pilot’s decision to accept the bet are unclear, as he could only have won the bet by dying, yet it might be explained by the captain’s authority and influence he had over the crew.

Approaching the landing strip, Klyuev used blinders to block his vision from inside the cabin and began the fateful descent. The co-pilot and the rest of the crew did not protest against the outrageously risky action of the captain, even after the terrain awareness and warning system had gone off. 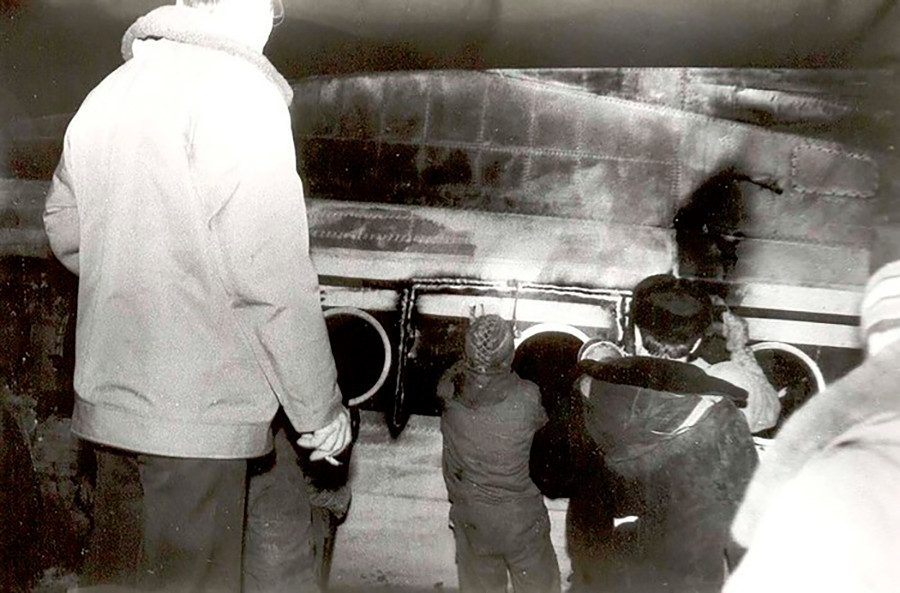 After the airplane touched the ground, its landing gear crashed, it rolled over and broke into two halves. Fuel gushed out of the tanks over the glowing engines and the remnants of the airplane burst out in flames with the passengers trapped inside.

Firefighters who were on duty at the airport arrived at the scene in record time. It only took them one and a half minutes to start saving passengers from the flames and acrid smoke. 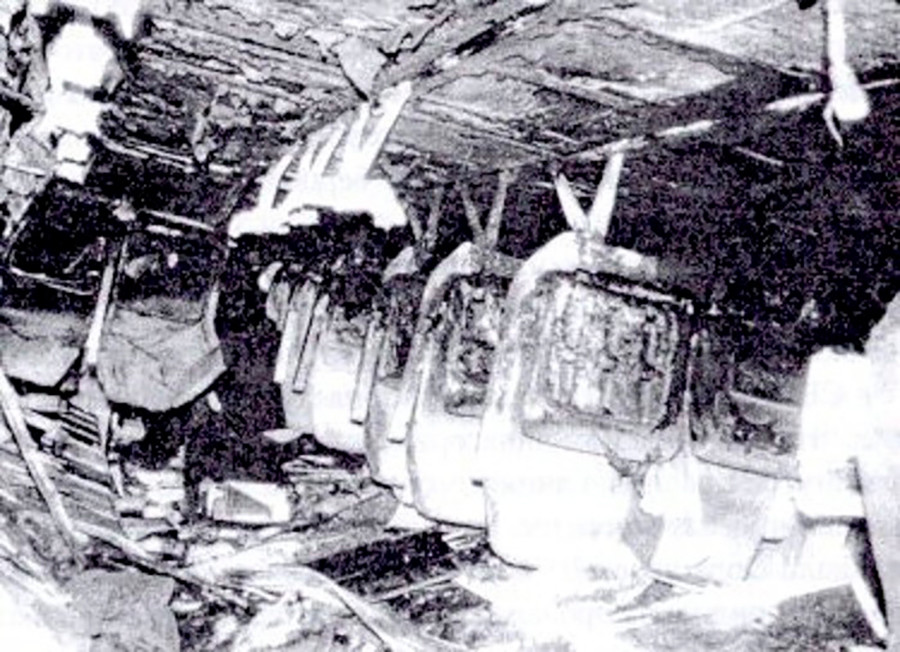 “Not all were able to contemplate such a terrible picture without a shudder. The sight of the corpses and the sickening smell of burning meat made many [of us] vomit. At the same time, there was such a suffocating smell in the cabin from the burned-out material that it was only possible to work wearing a gas mask,” said V. Frygin, one of the first firefighters who arrived at the scene of the crash. 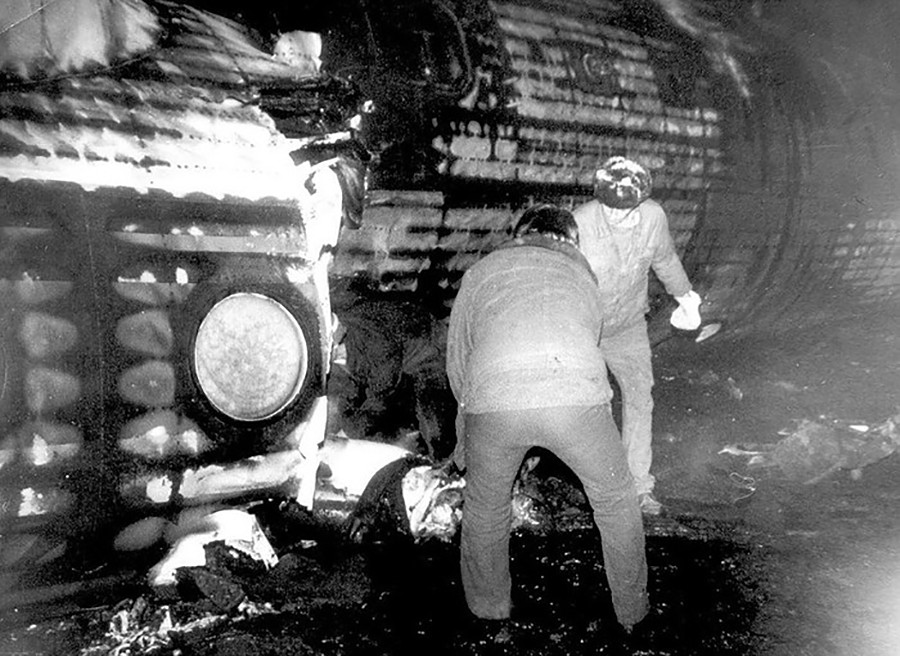 The firefighters had to fight the flames and smoke while also looking for survivors among the burning debris and bodies.

“As I dived into the smoke-blackened hull rift, I immediately saw the dead men hanging over my head, strapped in seat belts. After all, the plane turned over during the crash and all the seats with passengers, as a result, were upside down and as if on the ceiling. Many of the corpses were completely naked, while others only lacked shoes. All this was either torn off by the current of air or burned in the flames,” described Frygin the terrifying experience. 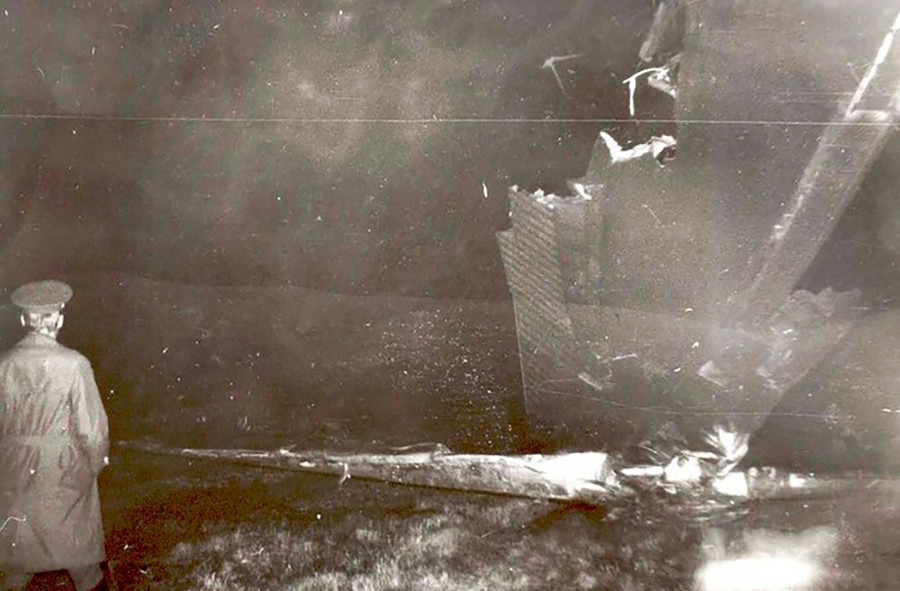 Dead bodies were falling on the firefighters as they were moving through the plane turned upside down in search of survivors. Although they managed to save some passengers, most of them died later, despite the heroic efforts of the firefighters.

The photos and the KGB

The Soviet police soon arrived at the scene and cordoned the plane off. The KGB followed soon to make sure the gruesome details about the accident would not be leaked to the public, as it was a usual Soviet practice to censor information. 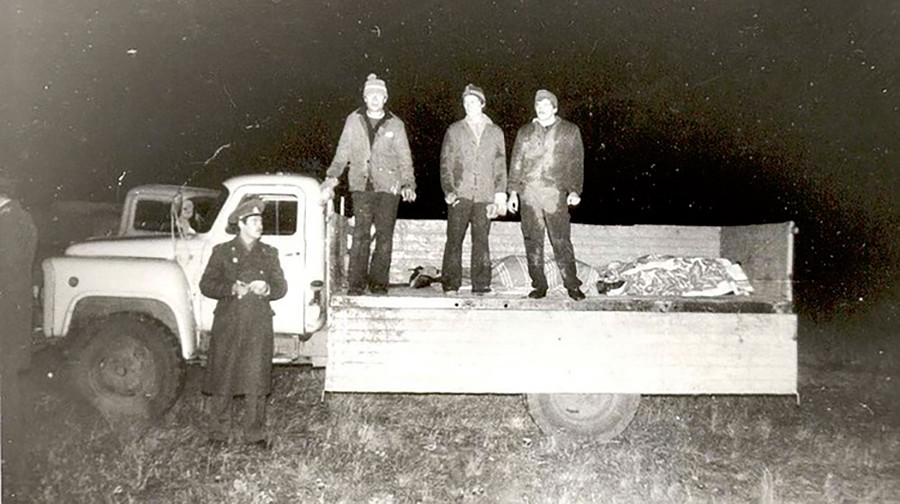 It’s thanks to firefighter Frygin that photos of the burning plane survived and were distributed. “I not only dragged the corpses out of the plane but — following my duty — I also tried to take as many photos of the scene as possible. I figured they would then be very useful for the following investigation of the causes of the tragedy,” said Frygin. 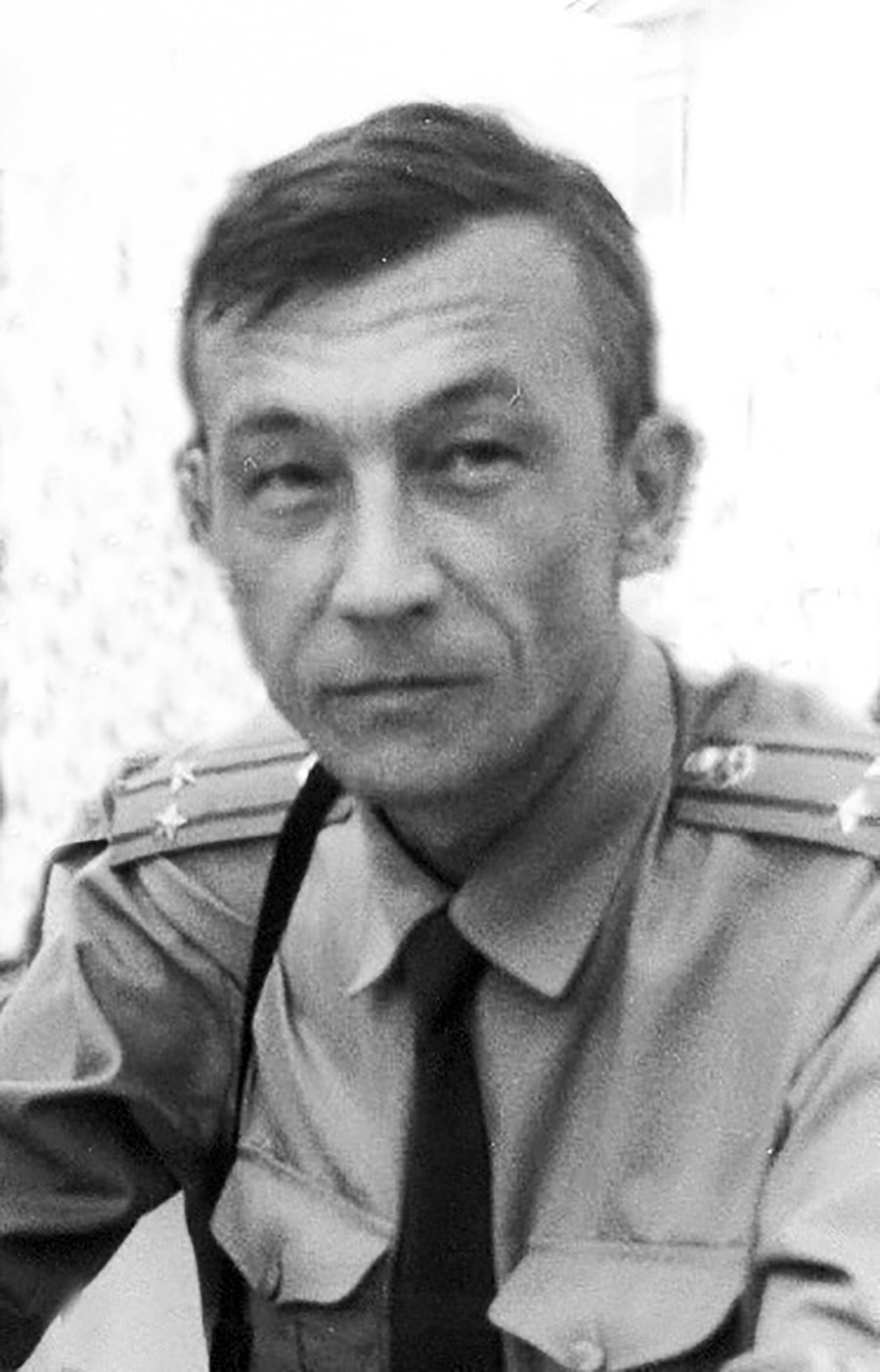 It’s thanks to firefighter Frygin (pictured) that photos of the burning plane survived and were distributed.

However, the KGB agents at the scene stopped the firefighter and retrieved one of the two films he had shot. The other film Frygin passed on to his college and instructed him to hide it.

In the aftermath of the airplane crash, the investigators concluded that it was the pilots’ fault: the captain had violated flight rules and the co-pilot did not take measures to avert the crash.

Captain Alexander Klyuev was tried in court — in a closed hearing where no press was allowed — and sentenced to 15 years in prison. He was released after serving six. Co-pilot Gennadiy Zhirnov could not be tried or questioned, as he died in hospital from a cardiac arrest. Witnesses said he was desperately trying to save passengers, diving in and out of the burning airplane multiple times before he fell unconscious.

The deadly bet caused the death of 70 people, including 14 children, and left countless more people suffering the loss of their loved ones.

Click here to read a story about a possessed engineer who hijacked his own train.